20 Of The Most Interesting Facts About Japan

Many of us imagine Japan as a country filled with flashy neon lights, crazy robots, and anime. And while that’s not entirely wrong, this island country is much more than that – and today we have some interesting facts that prove it.

Visiting Japan sounds like a dream for a lot of people – and it’s not hard to see why. The country’s ancient traditions combined with the latest groundbreaking technology make it truly unique and one of a kind. From koi fish swimming in drainage canals to oddly-shaped watermelons, check out all the interesting and weird things that make Japan stand out in the gallery below! And if you want more, make sure to read our earlier post !

#1 In The City Of Shimabara, In The Street Drainage Canals, Water Is So Clean That Koi Fish Live In It 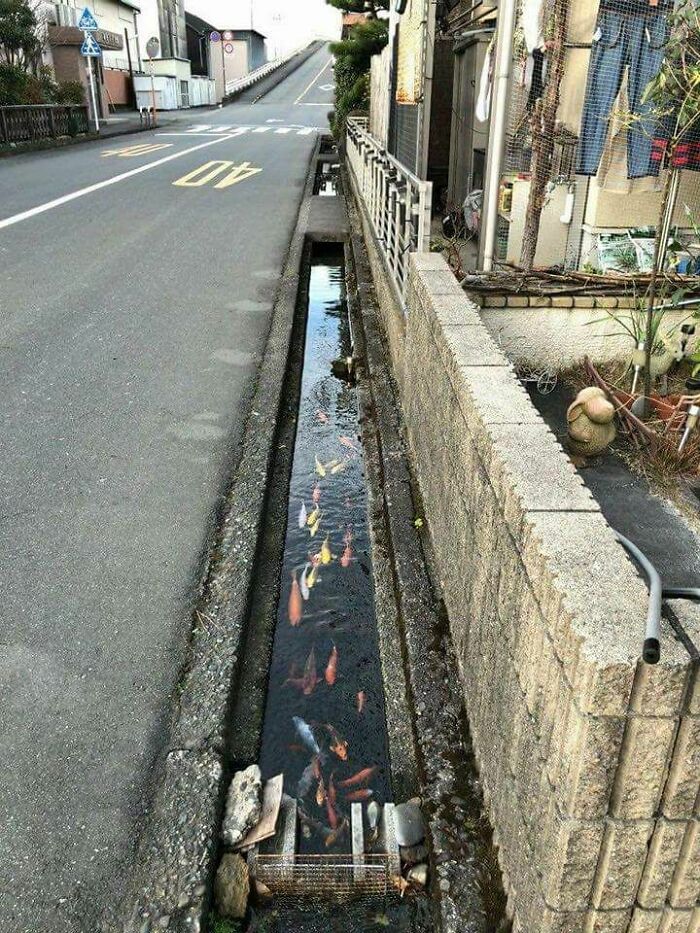 Because of the volcanic activities of Mount Unzen, there was a earthquake and tsunami in 1792, which triggered fresh water springs that now flow through the city of Shimabara on Japan’s Kyushu island. The water was so clean that in 1978, authorities decided to release colorful koi fish into the 100-meter-long waterway. It is even more amazing when you know that koi fish can survive only in extremely pure water, so that proves the quality of the water and it is just so cool to look at. 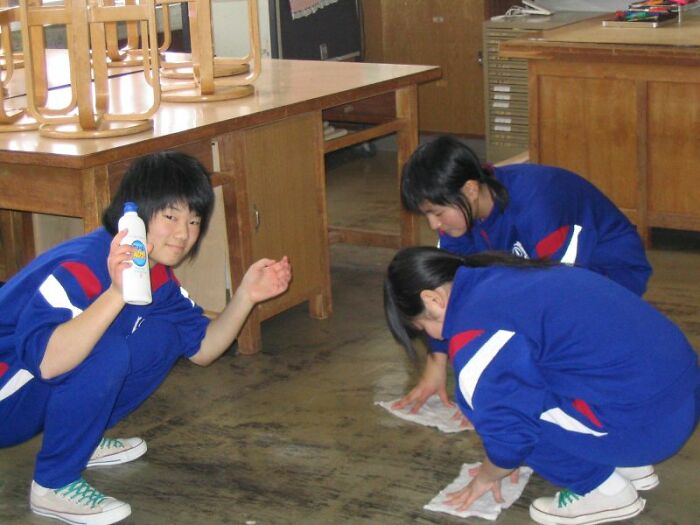 There is a tradition, that after classes, students remain at school to clean it. At the end of the day, students spend about 15 minutes vacuuming, sweeping, and cleaning various spaces in the school. It is believed that it helps to promote students’ understanding of life skills such as personal responsibility. It is also an opportunity to engage with other students that are not classmates and spend time with teachers in a less formal environment. Students become aware of cleanliness and don‘t make such a mess in the first place because they know they’ll have to clean it themselves. Just 15 minutes a day have a huge impact so that a child will grow up into a more responsible and respectful adult.

#3 Japan Is A Super Clean Country 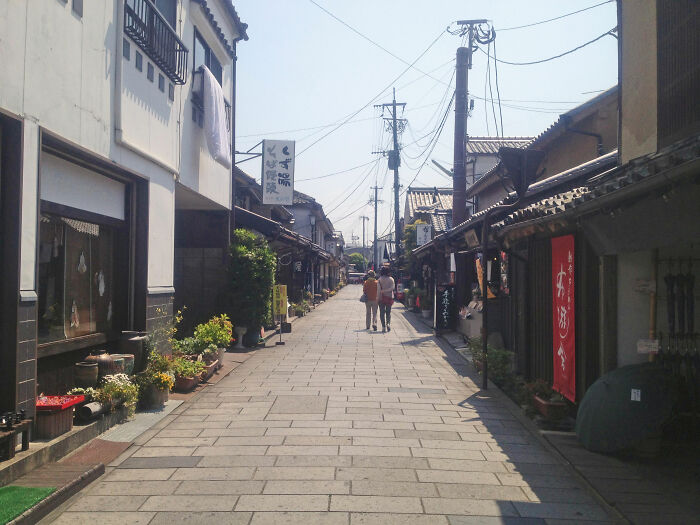 The cleanliness on the streets, in buildings, and on public transportation may surprise you if you’re not used to it, but in Japan, cleanliness is a lifestyle. What is more, spaces are kept tidy not by hiring more staff to do it, but the residents themselves keep it that way. Japanese people are taught from a young age to clean up after themselves. For 12 years while they’re at school, cleaning their environment is a part of the daily routine, so the habits the Japanese acquire remain their whole lives and even if they aren’t really up to cleaning, they still do it out of a sense of duty and responsibility.

#4 There Are More Than 6,000 Manhole Covers Decorated With Art In Japan 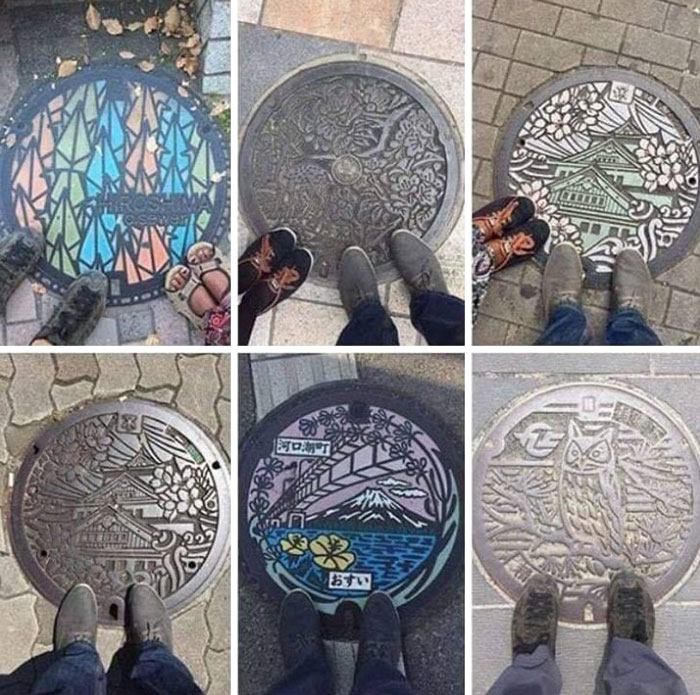 The Japanese have managed to make boring and unattractive things such as manhole covers into something you can call art. There are thousands of different designs: different municipalities have their own unique ones that you can’t find in other places, reflecting their local culture. In the 1980s, Japan installed new sewers countrywide and to generate some PR around this project, local municipalities decided to decorate the access points with beautiful covers. The craze took off and now there are almost 6,000 artistic manhole covers through the country. 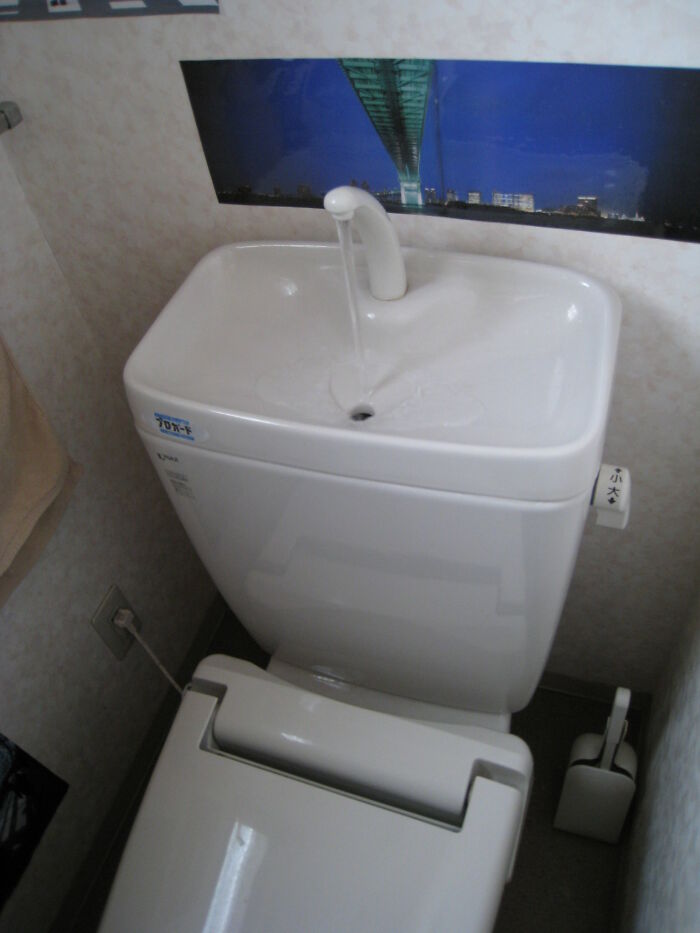 There are many toilets in Japan that have sinks attached to their tanks. A person can wash their hands with clean water, which then goes to the tank and they flush the toilet with the same water they just washed their hands with. It’s such a simple, yet clever way of saving water. 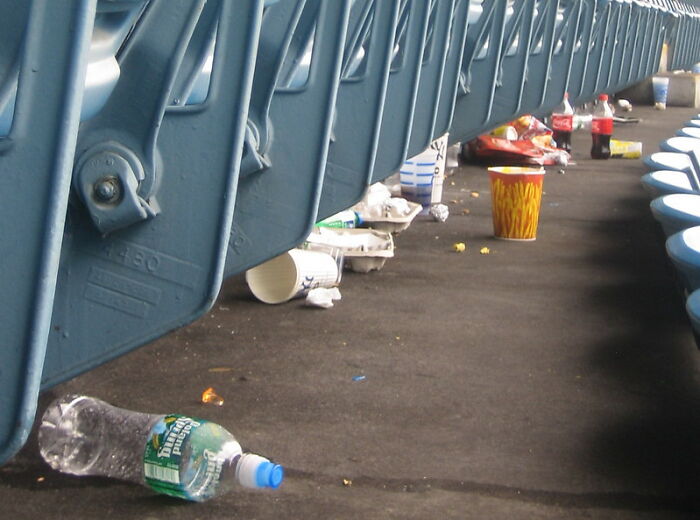 The world was so impressed when Japanese football fans stayed after the games during the World Cup 2018 and helped stadium workers clean up. They did that regardless of whether Japan won or lost. It’s actually part of their culture, as cleaning up is a part of their school lives, so the habits learnt at a young age stick with them through adulthood.

#7 Many Public Toilets Have Baby Holders In The Stalls 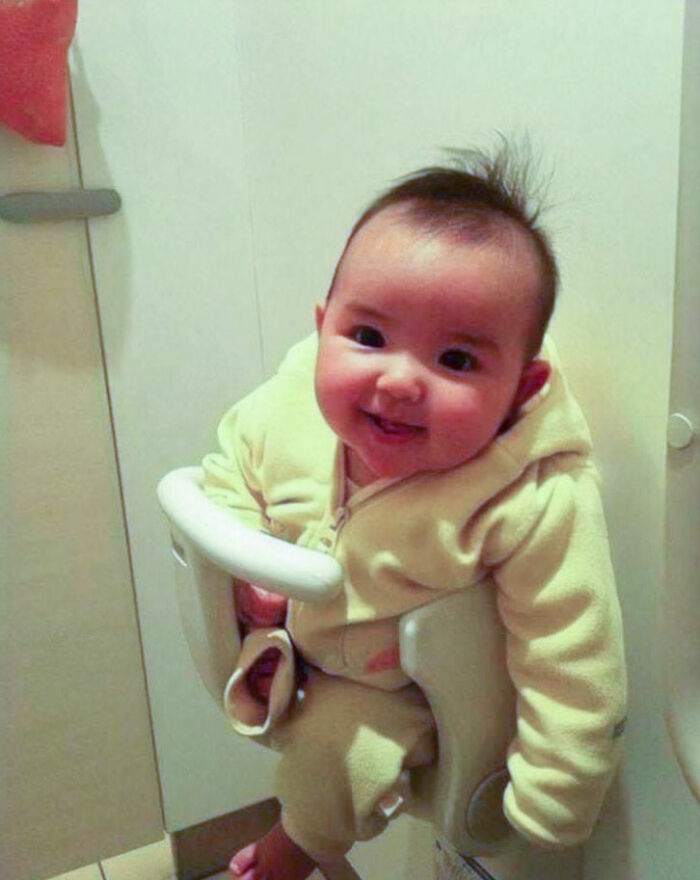 Many public toilets have baby holders attached to the wall so your hands are free and you can keep your eyes on the baby the whole time without fear of them running off or getting in some other trouble.

#8 In Some Hotels, Lamps Have Different Brightness For Double Beds 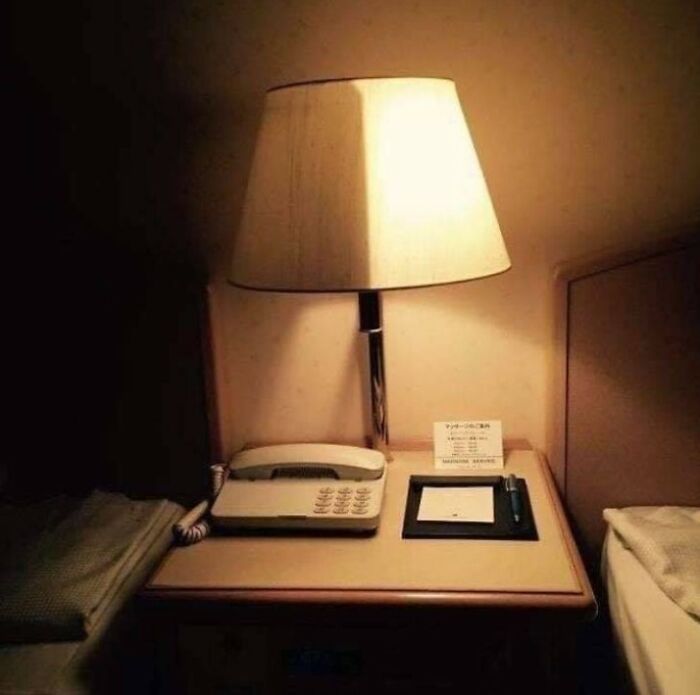 Some hotels have lamps that can be half-lit, so if one person needs light and the other doesn’t, they can keep only their side on and less light will be directed to the person who is ready to go to sleep. 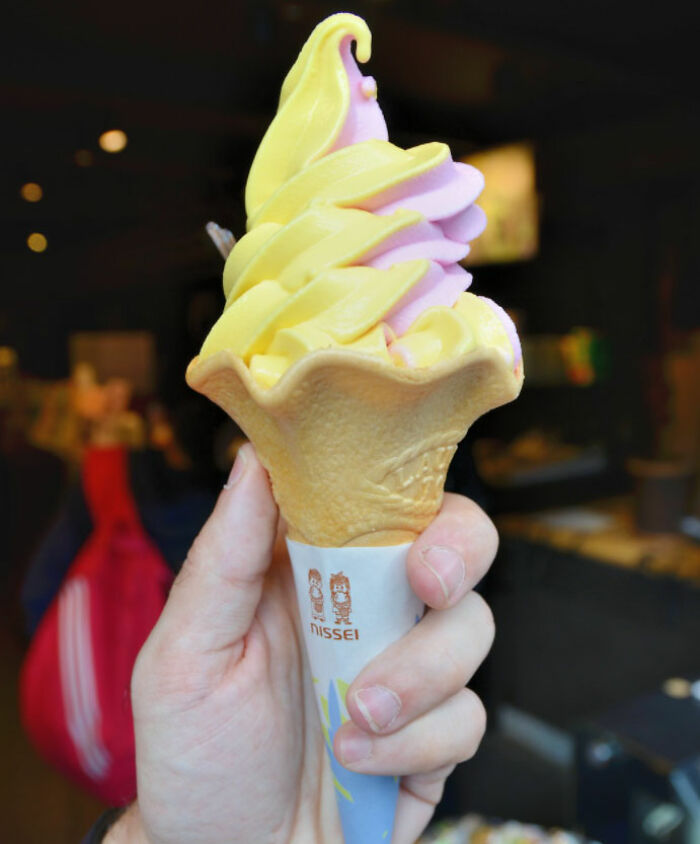 Researchers in Japan discovered an ingredient that helps ice cream to not melt as fast. The ice cream innovation is called Kanazawa Ice and the secret ingredient is strawberry polyphenols, which was discovered by accident. This type of ice cream is already being sold in some places and the dessert can maintain its shape up to several hours.

#10 Some Bathrooms Have Electronic Maps Showing Which Stalls Are Occupied 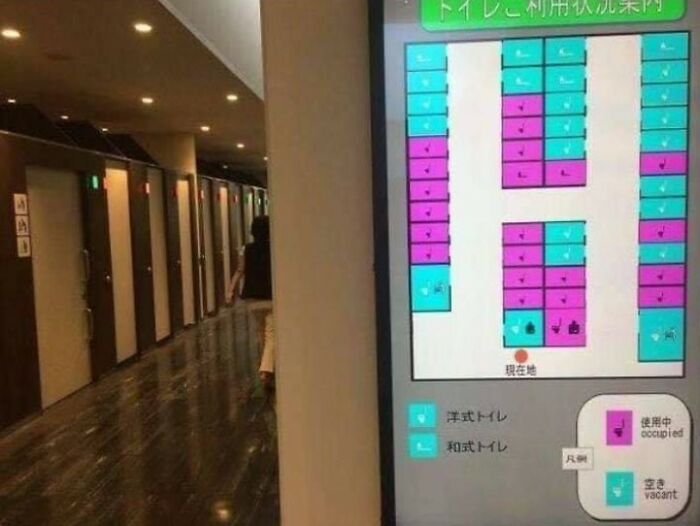 When you enter some bathrooms in Japan, you can see an electronic restroom map showing which stalls are occupied and which are open. Furthermore, these screens show if the toilet in the stall is squatting or not. It’s a really useful idea saving people the awkwardness of checking which stalls are free, especially if the doors are closed.

#11 Napping At Work Is Considered Acceptable 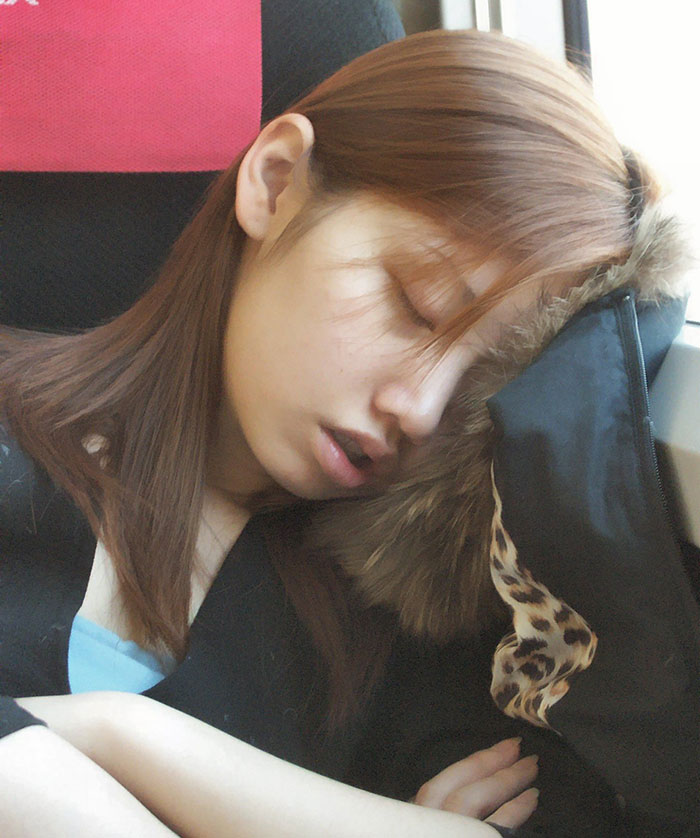 Sleeping during work is normal and acceptable in Japan. If in other countries, that would get you fired, in Japan, it is seen as a good sign that shows dedication to the work and that the person worked themselves to exhaustion. The companies may see it as a good thing, but Japanese are the most sleep-deprived nation in the world. People take naps not only at work, but wherever they can. It’s so widespread that there is a word for this phenomena – inemuri.

#12 In Japan, Cars Are Usually Parked In Reverse And Always Between The Lines 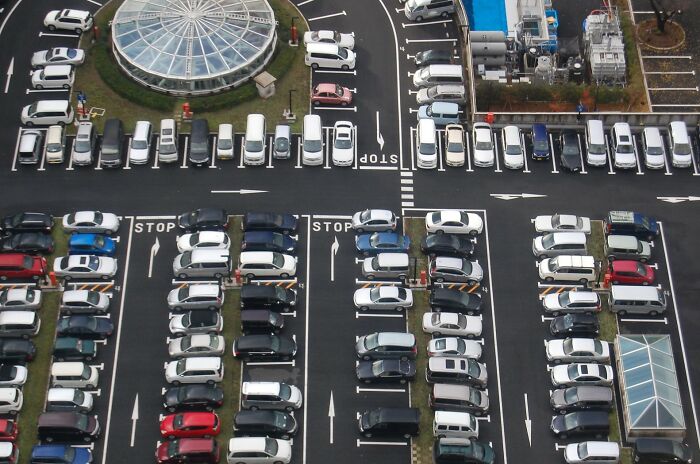 There is an unwritten rule that people park only in reverse and then leave their parking spot going forward. That is because Japan is so densely populated and parking spaces are small, so it is safer for them when leaving a space for a driver to be able to see oncoming traffic and not to worry about pedestrians that you accidentally may not notice. Also, because of the limited space, drivers park their cars very neatly between the lines. 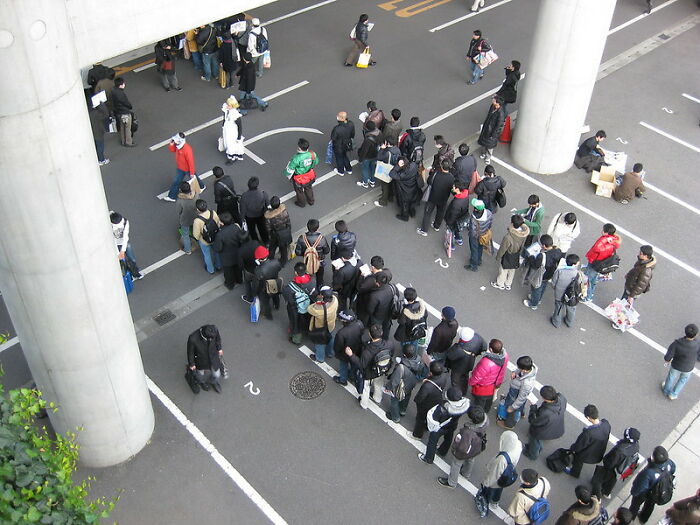 Japanese people are known for their discipline, and that includes queueing up too. To buy something or get a service, Japanese people line up and maintain order, even if it’s for long periods of time; no one is pushing or yelling, no matter if it’s a three-person line to get ice cream or in crowded train stations. There are actually signs on platforms that show you how to line up, and people follow these to maintain order.

#14 There’s An Island With Hundreds Of Rabbits 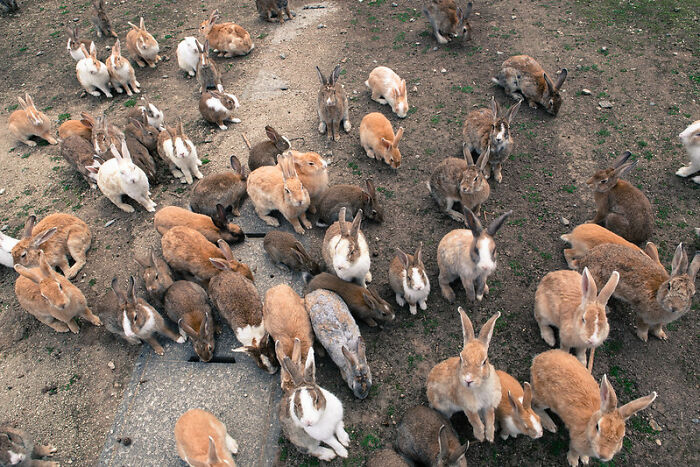 The small Ōkunoshima island in Japan is often also called Usagi Shima, which literally means “rabbit island.” It gets that name because it’s largely populated by rabbits. It is forbidden to hunt them and you’re not allowed to bring cats or dogs on the island. People guess that rabbits occupied the island when children released a few pet rabbits when the islands were evacuated in the 1940s, or that the rabbits are escaped test subjects from the island’s former toxic gas production labs, as there was a secret poison gas factory built on the island at the start of the 20th century.

#15 In Japan, You Can Find Cane And Cup Holders Next To An ATM 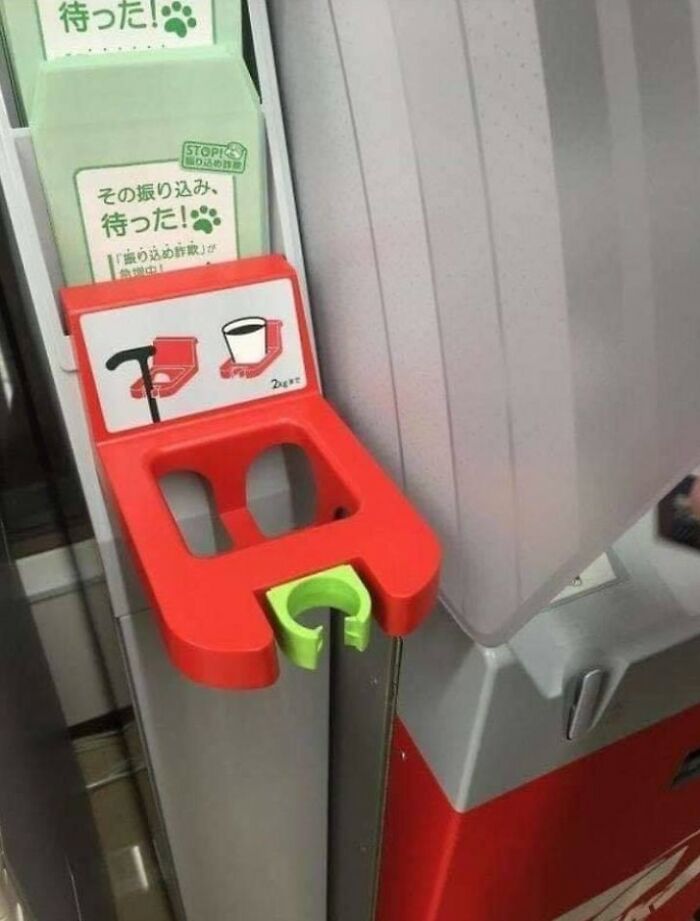 Next to an ATM, you can find this strange-looking contraption. It’s meant for you to put your cup in, or for elderly people to prop their cane safely so it won’t fall down while they’re taking some cash. It’s nice that services think about it, as nearly a third of Japan’s population is people older than 65 years old. 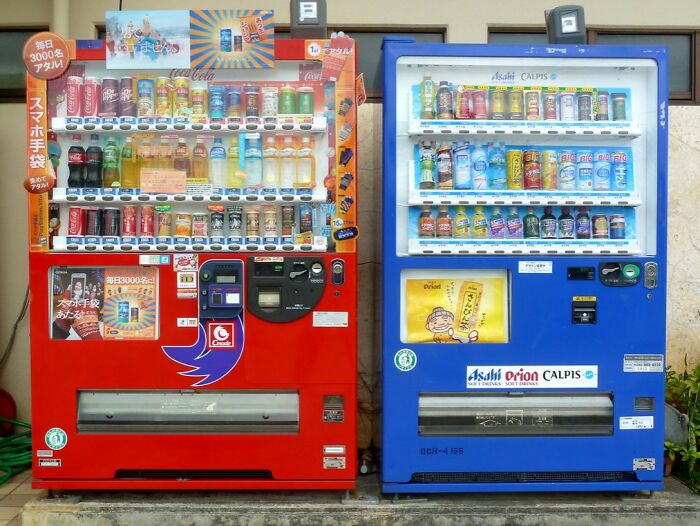 Japan has the highest density of vending machines in the world. There is approximately 1 vending machine to 23 people. And you can find anything from drinks and candy to hot food and alcohol. Sociologists and economists have offered potential reasons for why there are so many vending machines. Firstly, it’s cheaper to own a vending machine than a shop, because of cost of labor and expensive real estate, and because of the low crime and vandalism rate, companies don’t have to worry about that. 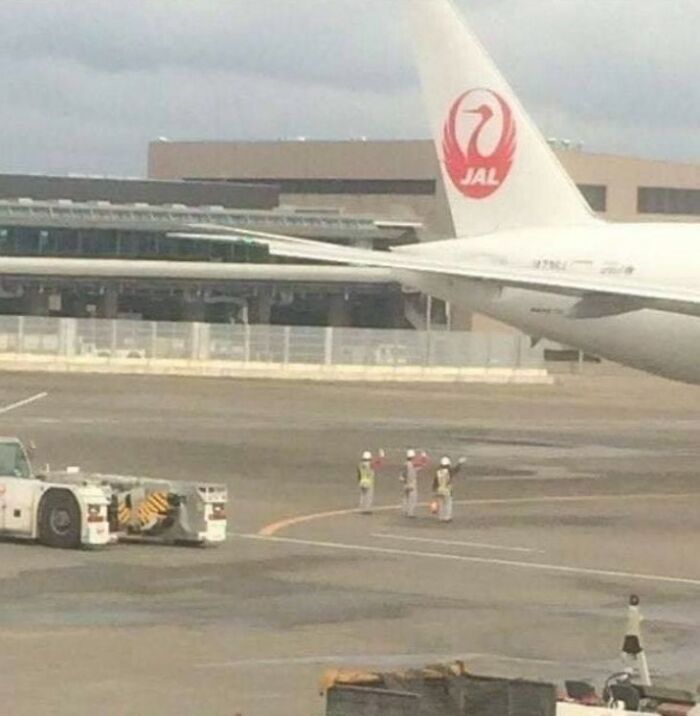 In Japan, the ground staff, working to help the plane to take off, often waves the passengers goodbye until the plane is on its way. 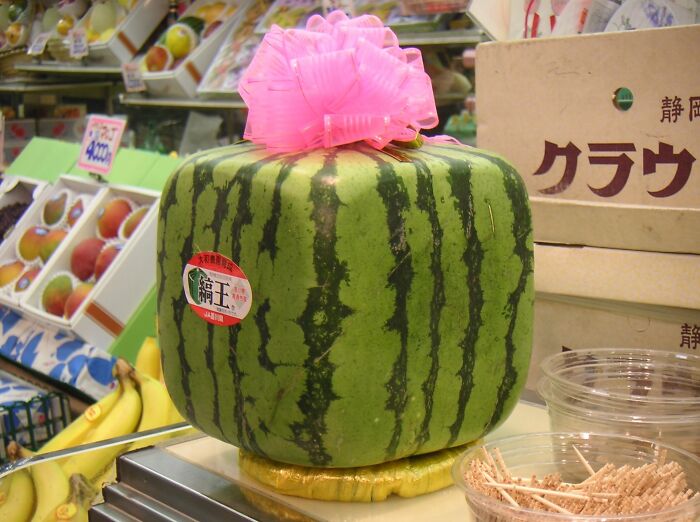 To get the cube shape, the watermelons are grown in boxes and they take the shape of the containers. The idea came so that it would be easier to store them in the fridge and easier to cut without them rolling around. Although the cube watermelons were meant to be more practical, now they are essentially ornamental and it’s not an everyday fruit as it can cost up to $100.

#19 There Are More Than 300 Pedestrian Scrambles In Japan 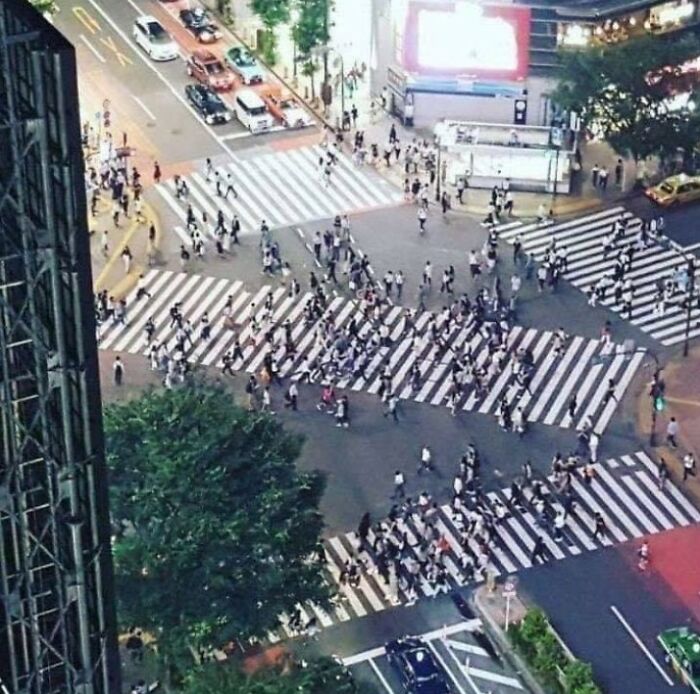 Pedestrian scrambles or diagonal crossings are very common in Japan. There are more than 300 such intersections. Japan’s largest, and most famous, diagonal crossing is found in Tokyo, outside Shibuya station. Over 3,000 pedestrians can cross during the two minutes of green light and it is one of the most well-known pedestrian scrambles in the world. It is so popular that it has become a symbol of Tokyo and Japan as a whole. 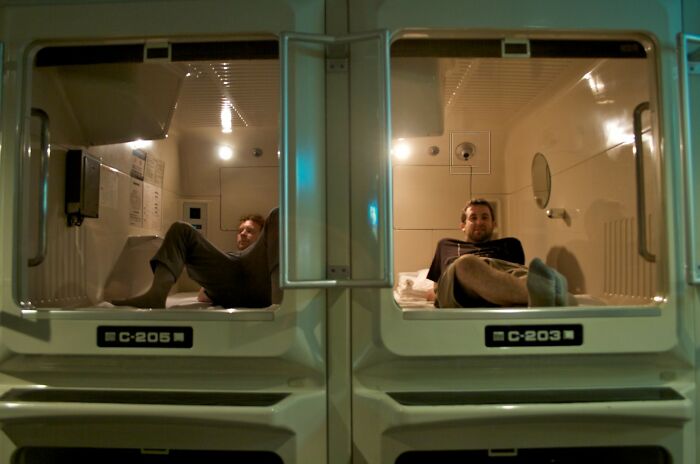 The first capsule hotel was opened in 1979 in Osaka. It is a type of hotel that provides bed-small rooms. They are cheap, usually to stay just for the night, and most often used by Japanese businessmen. Capsule hotels are usually found not too far from the major train stations in large cities. Capsule hotels have washrooms, toilets, and showers, but these are shared among all the guests. Also, there are other services like restaurants, game rooms, or manga libraries.