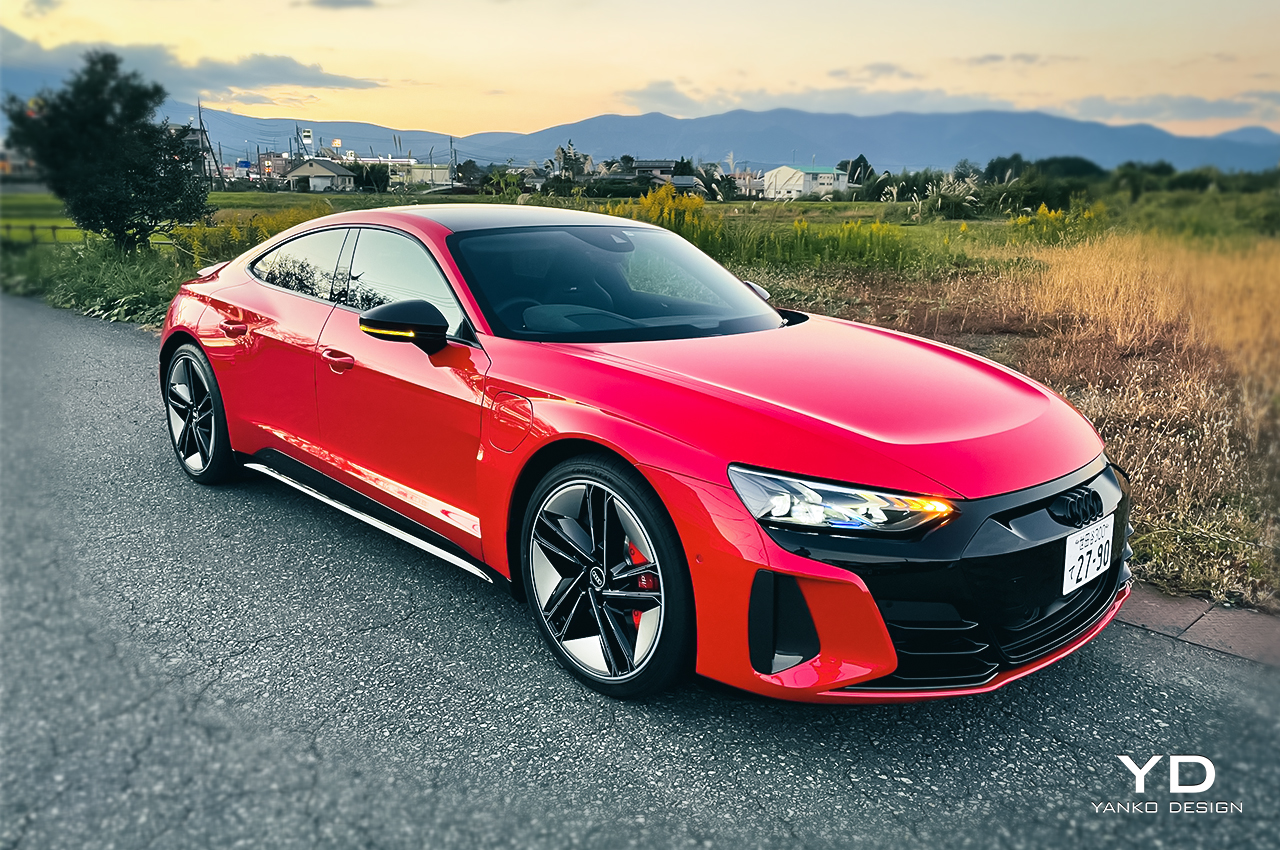 Every year in the course of my work reviewing over 100 new cars, I come across one that truly astonishes. This car’s exterior curves don’t just take your breath away, but its performance and handling are the instigators of multiple goosebump attacks.

The fully electric Audi RS e-tron GT (hereinafter ‘RS’) four-door coupe is such a car. Employing the Porsche Taycan’s industry-leading running gear and powertrain, as well as Audi’s legendary 4WD Quattro system, the RS packs a whopping 590-hp and a zero to 60 mph sprint time of under 3 seconds. For drivers, and art lovers, the RS is the highlight of the year. 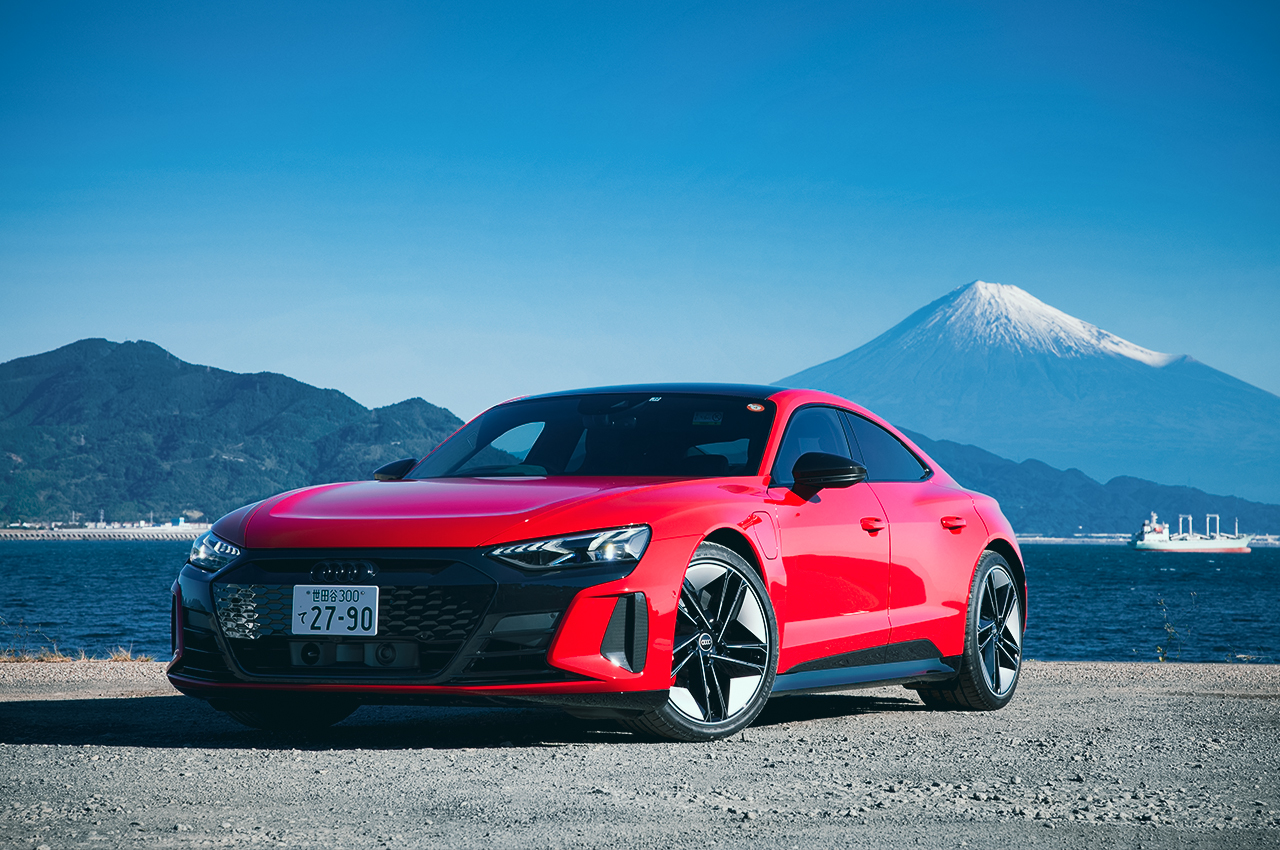 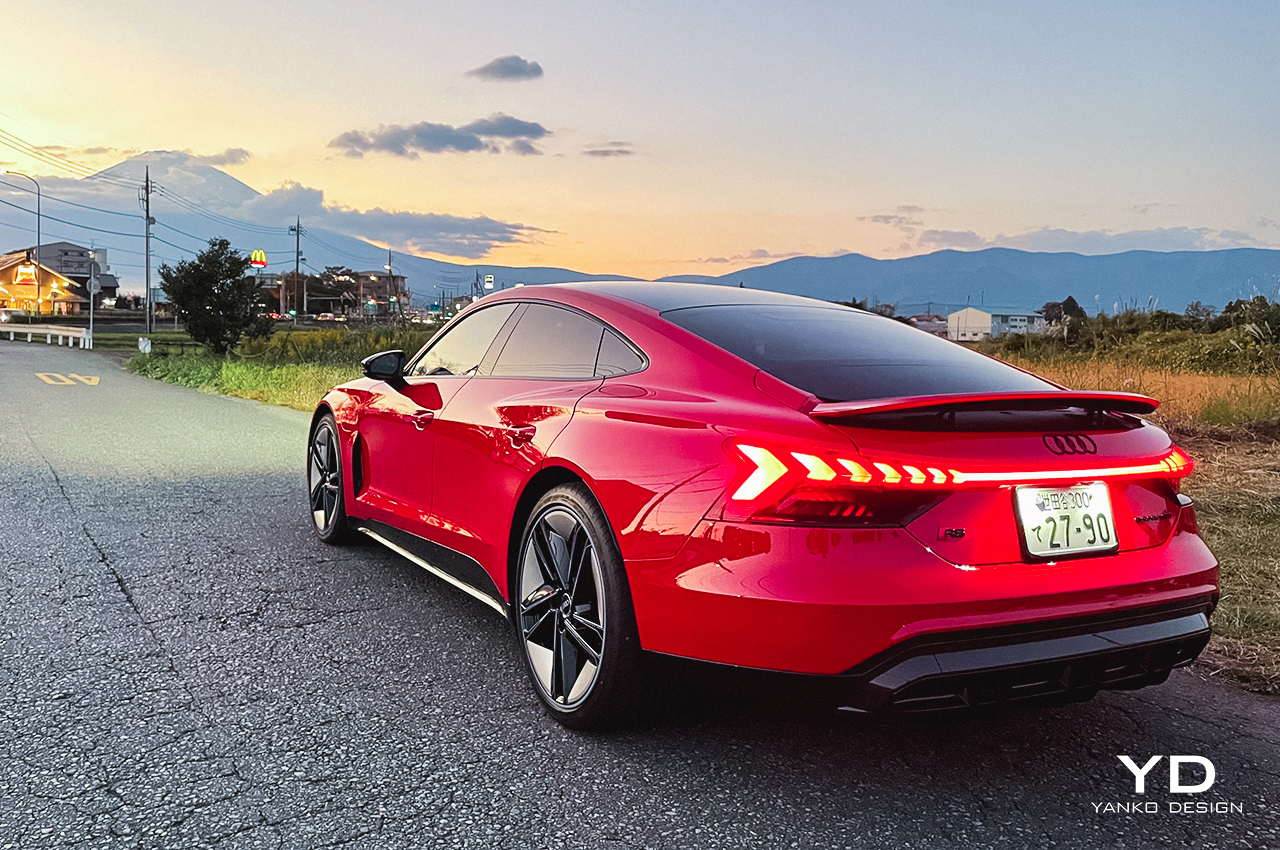 To Marc Lichte, Head of Design Audi, the e-tron GT Concept was the most beautiful car he had ever designed. We are just lucky that this 2018 concept made it to production. Virtually untouched aesthetically, the RS e-tron GT and e-tron GT are simply stunning machines. In fact, I believe the RS I drove last month is the prettiest EV on the planet, bar none.

When speaking of their penmanship, rarely do designers reveal such honesty with the vast majority wanting to spread the styling glory across several different cars in their whole lineup. But when you create the Statue of David of the electric car world, why try to dilute your passion and pride in your sculpting? So hats off to Lichte for admitting the obvious.

Following in the footsteps of the e-tron SUV and e-tron Sportback, the RS arrives into Audi’s battery electric vehicle (BEV) lineup above its lower powered e-tron GT brother that dons the same exquisite exterior and employs the same Taycan platform. 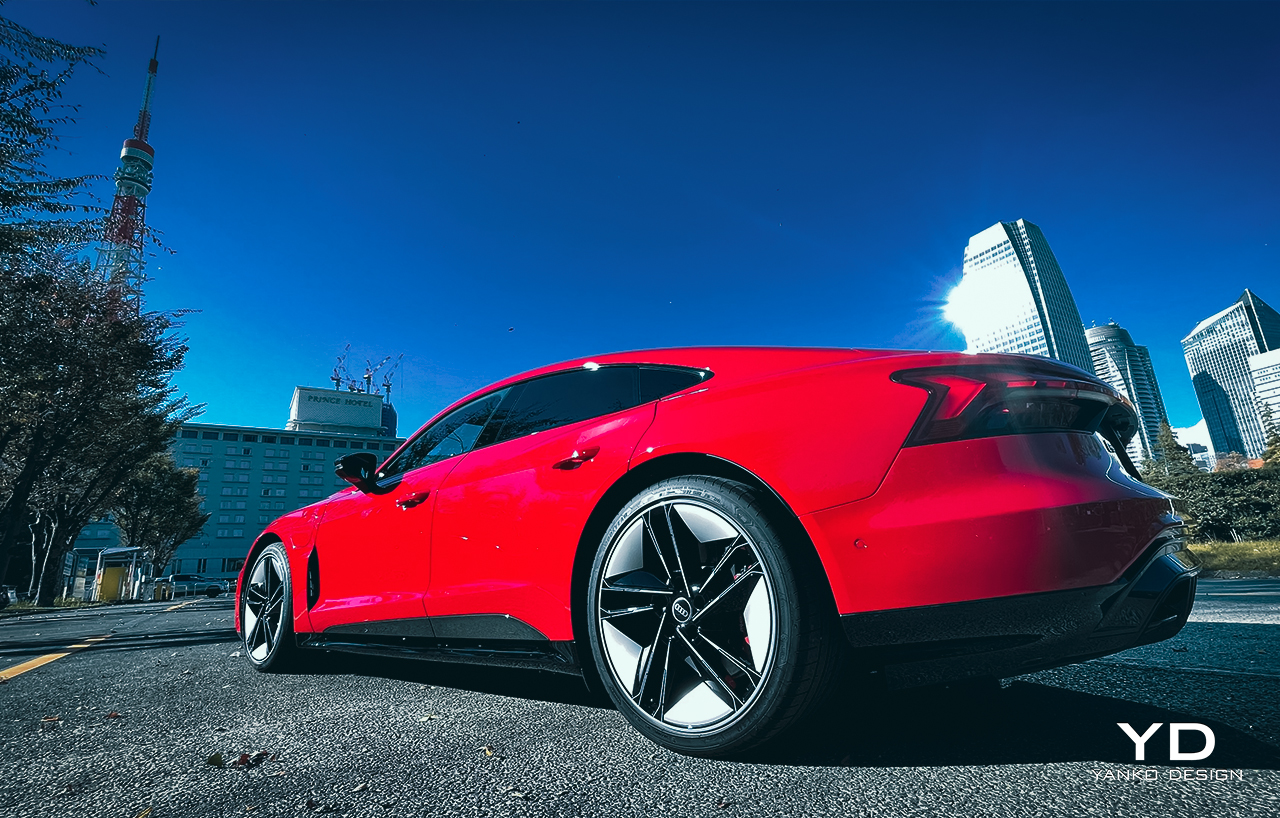 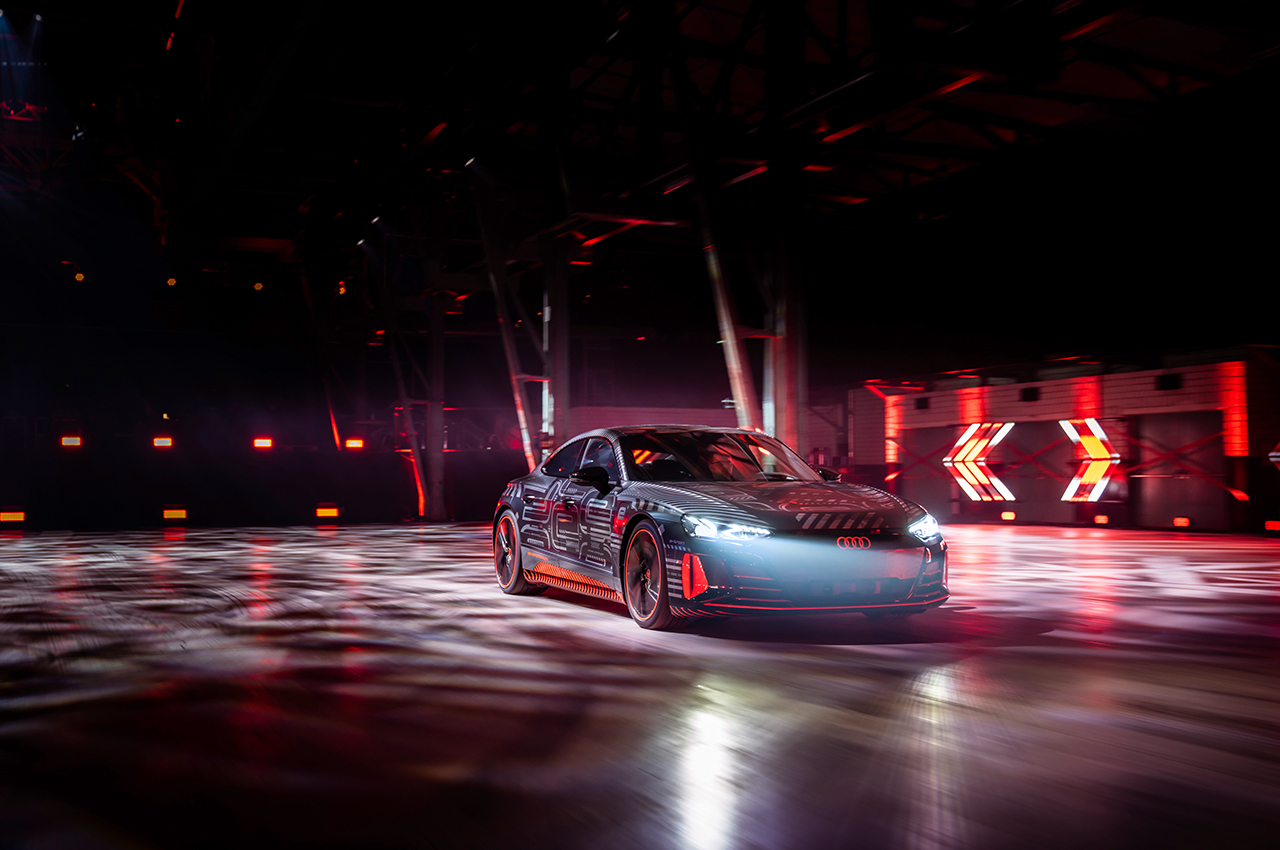 Secrets of the Audi’s good looks

So what makes this e-tron GT range so pretty? Those sumptuous proportions. Short front and rear overhangs, a long wheelbase, subtle curves, and gentle edges, a perfectly contoured roofline that rakes back from the A-pillar to create a muscular coupe-like silhouette all merge to create automotive pornography. At 16.3-ft in length, 6.4-ft in width and 4.5-ft in height, this Audi is flat, wide and low, highlighting the car’s low center of gravity and excellent handling capabilities. I particularly like the hollowed out hood accented by the sharp LED headlights, the solid front honeycomb-design grille, the drag-reducing 21-inch alloy wheel design, the full body width tail light design and those huge 6-piston brake calipers and rotors.

As Lichte points out, the design of the RS is an ideal combination of form meets function. The e-tron GT’s exterior had to be visually appealing but it also had to incorporate the two most crucial aspects of an efficiently-styled EV: reduce aerodynamic drag and increase range. “The design of this car guarantees the optimization of airflow [over and under the body] and therefore excellent aerodynamics,” says Lichte. The lightweight carbon-fiber roof also helps to reduce upper body weight while improving the car’s center of gravity. In fact, the e-tron GT lays the foundation for the future aesthetics of Audi electric models. No surprise there. 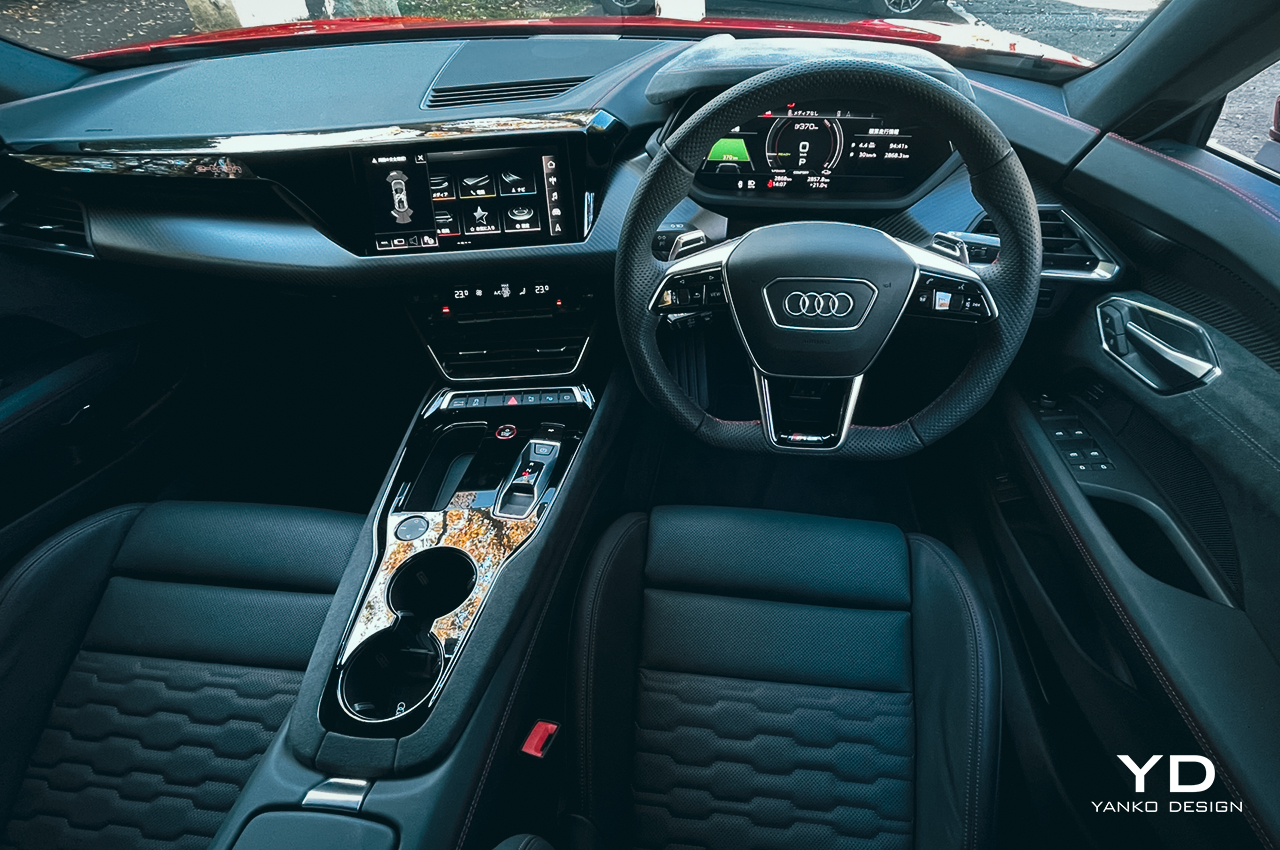 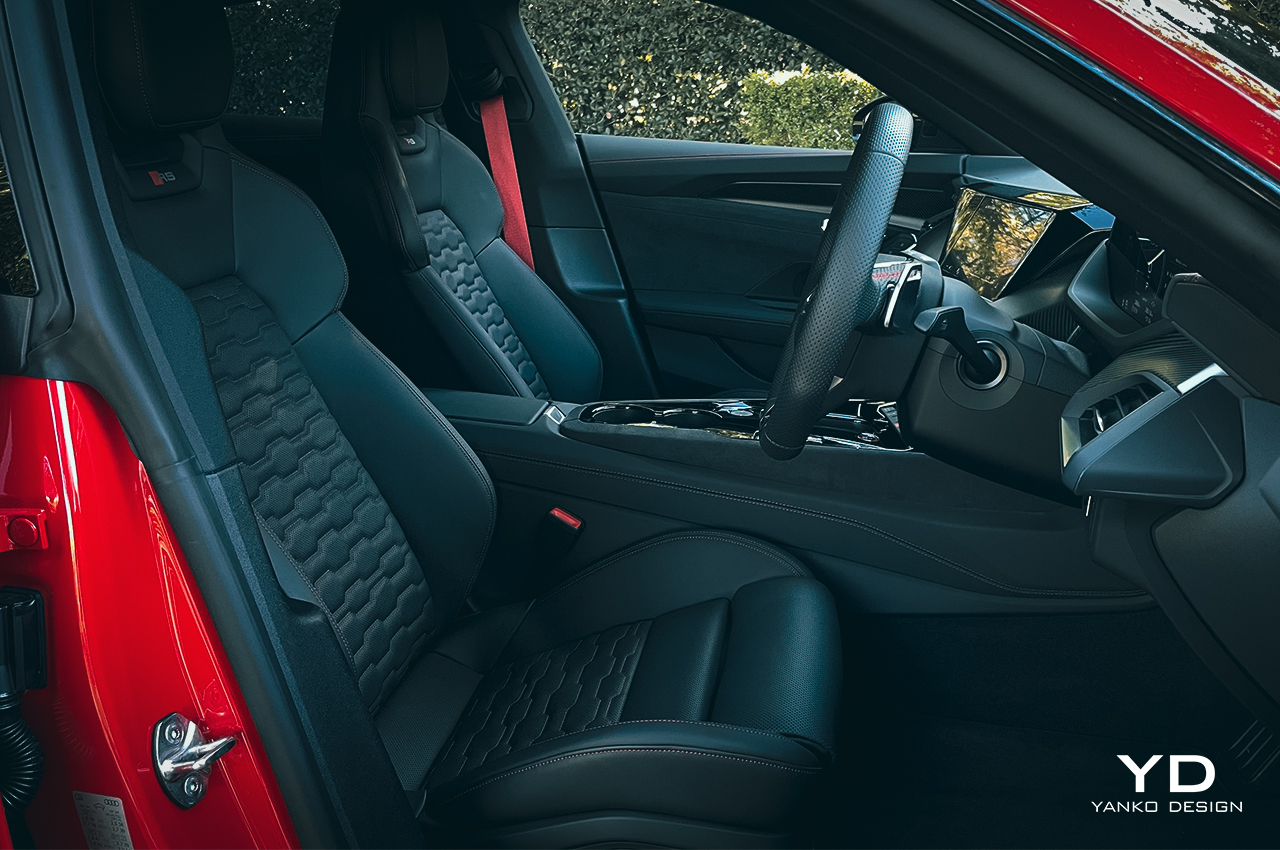 Inside the cockpit, the RS is just as lovely as it is on the outside. The layout of the dashboard is classy and high quality but not in-your-face with huge upright tablet-like touchscreens like in the Tesla Model S and Ford Mustang Mach-E.

My compliments go to the stylists who penned the Audi’s interior that boasts a luxurious mixture of leather, carbon-fiber, aluminum and alcantara. Ambience is top-notch throughout and the whole cabin feels well made. If fact, Audi should be complimented for combination of understated luxury and relative simplicity employed is the cockpit styling. Unlike the Model S, Taycan or Mach-E, which require an in-depth lesson in new-fangled touchscreen infotainment systems, the RS e-tron GT is intuitive with a good mix of digital and analog switches.

Multiple power adjustments on the driver’s seat and flexible steering wheel tilt and telescopic functions mean that any driver can quickly find their ideal driving position. And those bespoke bucket seats with RS badging, exquisite red honeycomb pattern stitching and plenty of lumbar support help to elevate the driver experience even further.

Unlike those other EVs though, the RS offers a modern virtual cockpit with a full digital readout and a good mix of physical switches and touch controls that are just more intuitive to operate easily while driving than touchscreen controls. The Bang & Olufsen sound system is the right choice and the MMI infotainment menu and graphics are excellent. 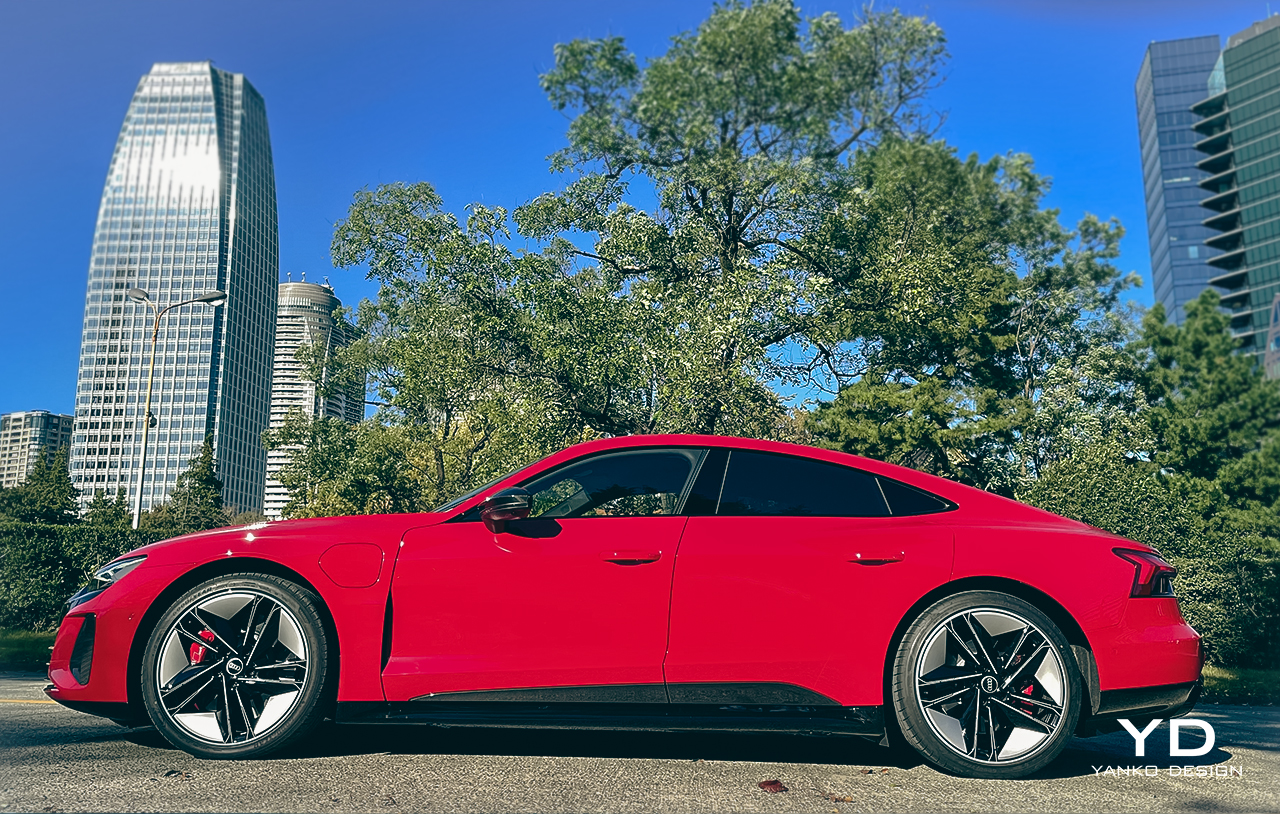 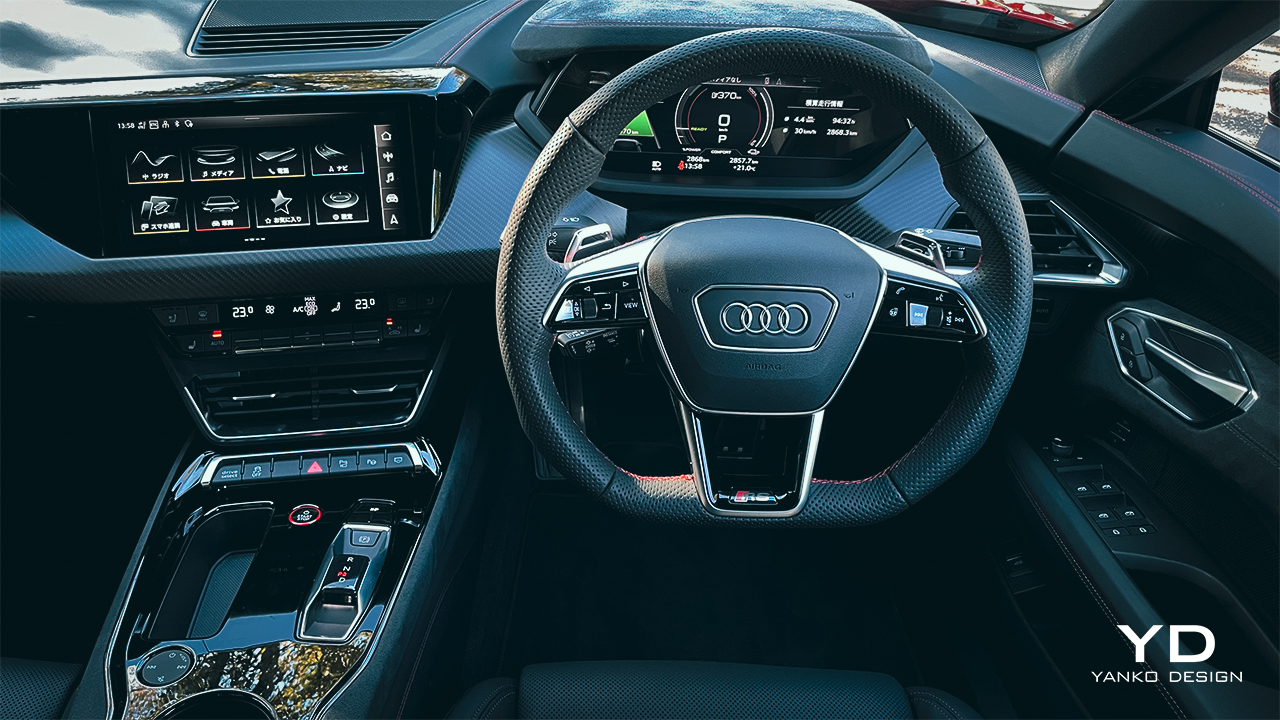 In the back seat, you get a surprising amount of legroom thanks to the long wheelbase, and a bespoke sculptured out floor called a ‘foot garage’ (what will those marketing boys come up with next?) gives you plenty of space to put your feet. However, in focusing so heavily on aesthetics and aerodynamics, the e-tron GT suffers from three shortcomings in the rear seat. Apart from limited headroom for anyone over 6-ft, the high belt line and low slanting roof mean that the already tiny back door window cannot be fully lowered and visibility through the rearview mirror is not ideal. A digitized mirror would solve the trick.

Also, the sizable C-pillar can make the rear seat seem a little claustrophobic at times. And I’d really like Audi to focus on their rear seat comfort and give the seat back a few more degrees of recline. Those rear seats are too upright and can lead to back ache on long journeys. You might lose a little trunk space, but by fitting a semi-reclining rear seat, you would improve back seat comfort significantly. Speaking of trunk space, the aerodynamically design-focused e-tron GT offers 405 liters which is the same as a Taycan. But it loses out substantially to the Tesla Model S which delivers 744 liters. Flatten the rear seats however using manually operated levers from the rear doors and you can generate some usable luggage space.

It goes without saying that the space-challenged middle rear seat is really only tailored for ankle-biters given its lack of headroom. Lower the rear seat armrest however, and you create a through section to the trunk that allows you to carry skis or other long instruments with ease. 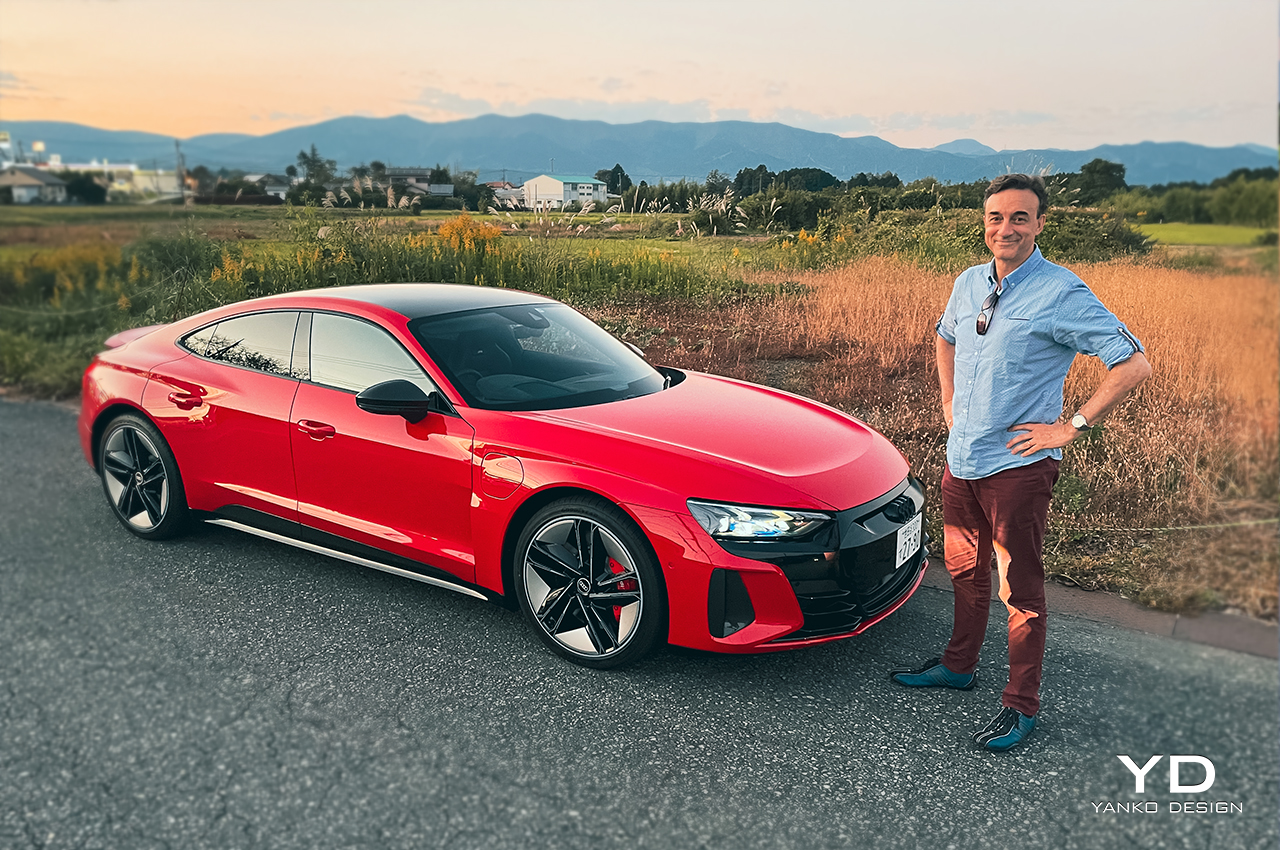 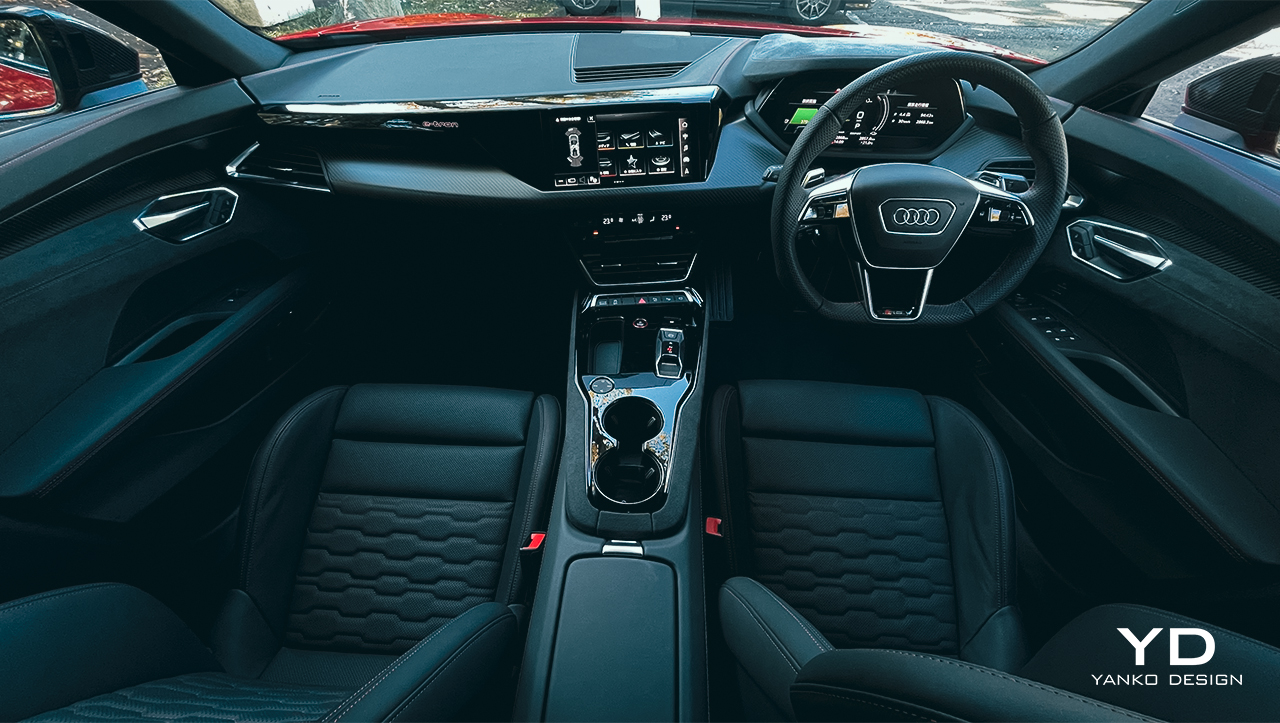 Both the entry-level e-tron GT and the flagship RS e-tron GT that I drove sit on the Taycan’s platform made from a mixture of steel and aluminum for maximum strength and weight-saving. Both have a motor at either end comprising its four-wheel drive system, and both have the same two-speed gearbox as the Taycan on the rear axle to maximise acceleration off the line. The RS features a 93-kilowatt-hour battery pack that offers range of 232-miles according to the EPA, although with frugal, efficiency-focused driving, you could reach 250-miles or more. Obviously that’s nowhere near the 348-mile range of the latest Tesla Model S Plaid, but carmakers keep telling us that few commuters travel more than 200 miles a day anyway, so the Audi’s EPA-rated 232-mile capacity is well within the ballpark of acceptability.

The RS e-tron GT generates 590-hp and 612 lb-ft of torque, or 637-hp on overboost for 2.5-seconds to deliver a 0-60 mph time of 2.9 seconds which is nearly half second slower than the Taycan Turbo S and almost one second behind the world’s fastest EV, the Model S Plaid at 2.1 secs. 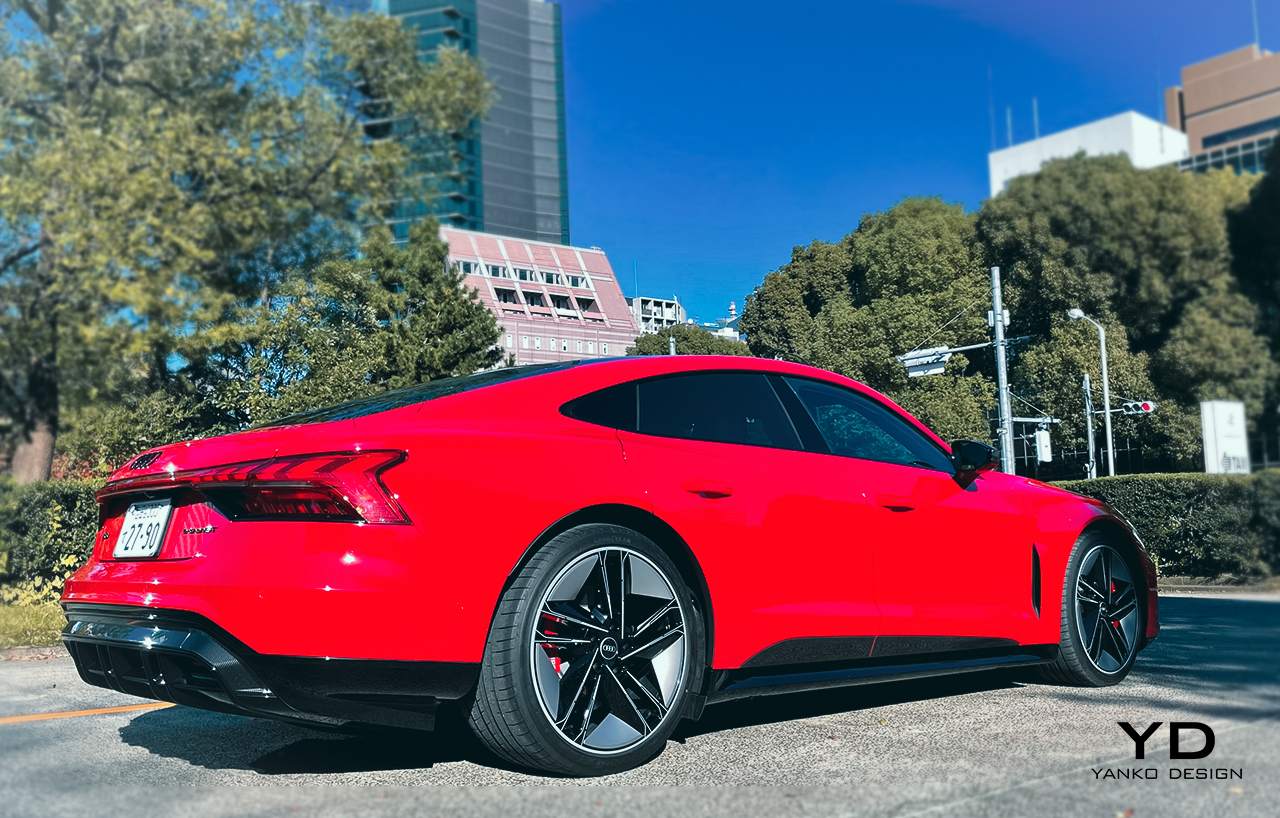 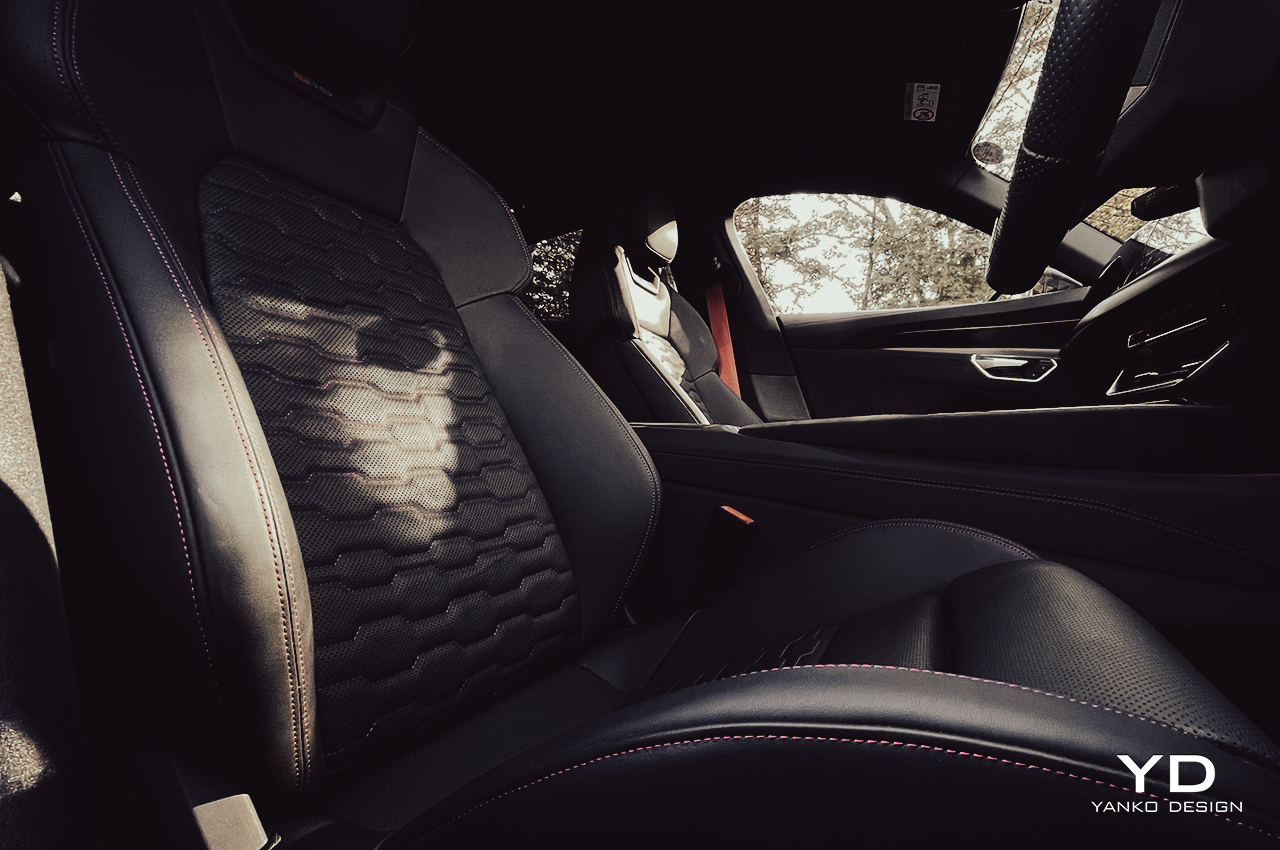 With that said, the RS’s sub-3 second jump from zero to 60-mph still makes this Audi blindingly fast. For the record, the RS I tested was fitted with all the optional bells and whistles including four-wheel-steering, air suspension, carbon ceramic brakes and an electronically controlled rear differential. Engage launch control, left foot on the brake, right boot on the accelerator, lift your left foot, take a deep breath, and within around 5 seconds, this 5100-pound vehicle will have cleared the Delorean’s 88-mph terminal speed necessary to travel through time in Back To The Future. In fact, as I drove this car, I thought to myself—if a movie studio ever decided to film a remake of Back To The Future, they could do a lot worse than upgrading to the RS as their time machine. To me at least this thing looks, feels, sounds and handles the way a 21st Century time machine should.

Speaking of sound, the RS’s lack of engine or wind noise is a blessing in disguise as the electric powertrain’s silence only works to enhance the car’s tire noise, which there can be a lot of depending on the road surface. But then again, this heavy car that packs such a punch needs these huge grippy 21-inch Goodyear tires that naturally create noise and chirp and squeal intermittently when fighting for traction under intense acceleration. 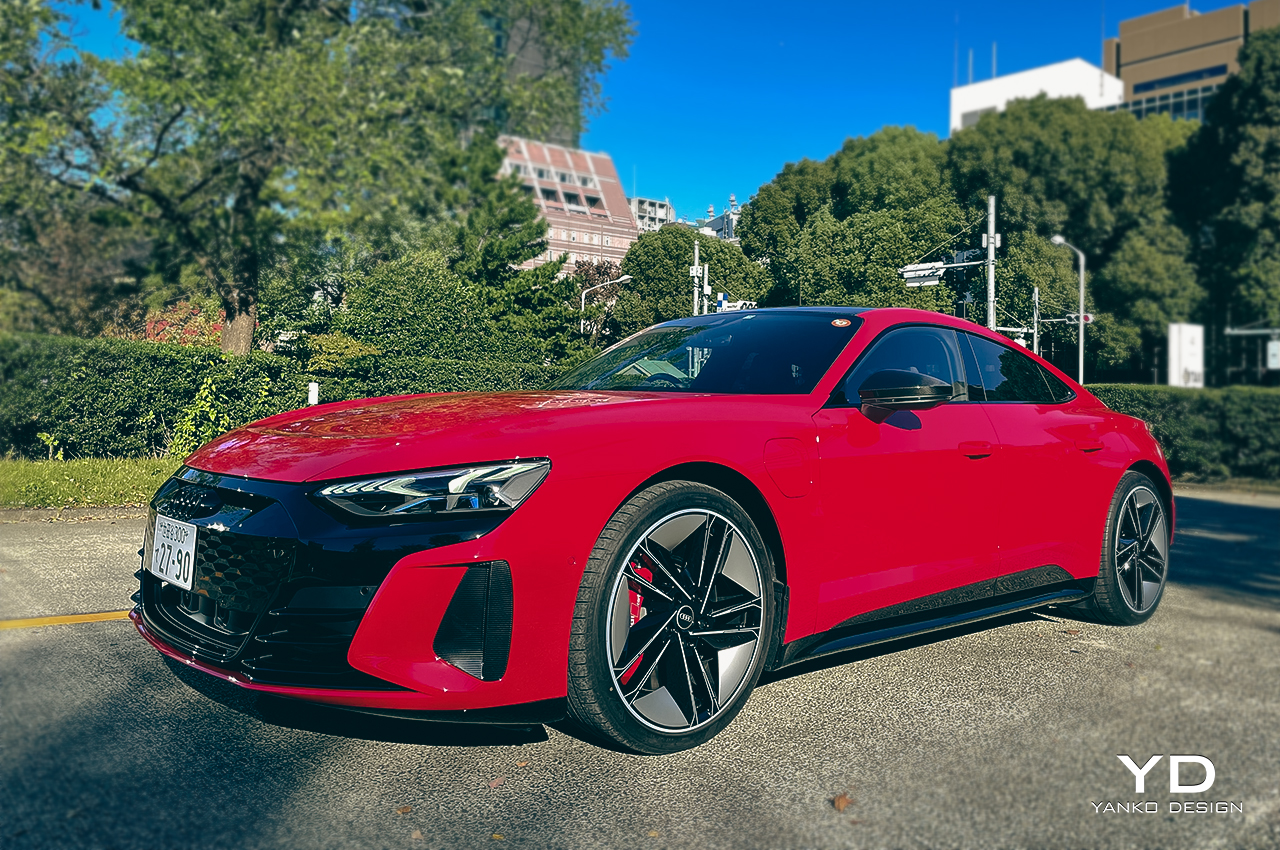 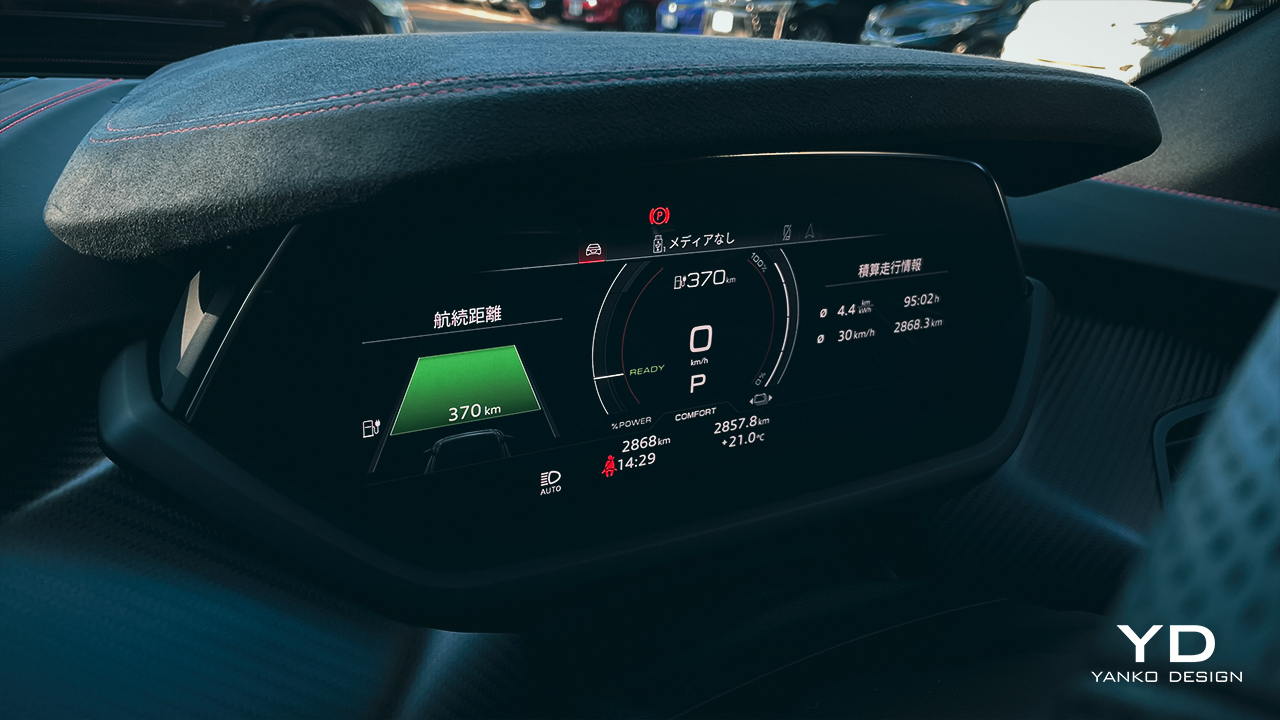 In the same vein as the Taycan, Audi engineers tried hard to produce a sonic replacement for the glorious V8 or V10 throb associated with Audi’s R8 supercar and other high-end models. The ‘e-tron sport sound’ fitted to the RS employs two control units and amps in the car’s trunk that feed two speakers inside and two outside the vehicle. Depending on your speed it will send a sci-fi-like artificial tone into the cabin that is tolerable but not as noticeable as the one on the Porsche. A safety feature that is being pushed by governments around the world, turn the car on the you’ll notice a rather loud pulsating hum from the outside to warn pedestrians.

The RS’s front suspension compromises of aluminum double-wishbones, while the complex rear suspension is a multi-link set-up with three-chamber air springs and adaptive dampers fitted to all four corners. This combination gives the RS not only great poise when cornering but deliver a surprisingly compliant and comfortable level of ride quality at low speeds around town. Rear-wheel steering with Audi’s electromechanical power steering plus system extract pinpoint accuracy when diving into a sharp corner and loads of grip on the way out. The RS may be nearly as quick and offer similar range as the Taycan, but overall the ride is more compliant and mellow. And over long distances, that means a lot.

Being an Audi, the firm’s quattro four-wheel drive system forms part of the drivetrain set-up, with all four wheels permanently driven, unless efficiency mode is selected, when the e-tron GT becomes front wheel drive only. The steering is quick and precise and delivers reasonable feedback from the road. It is not however as communicative as the R8. Drivers may be confused by the presence of gearshift paddles behind the steering wheel. Audi says they allow you to adjust the level of regenerative braking, which on other cars can assist greatly in when driving in traffic. However, the three separate region modes, simply toggled through the paddles, are well, basically superfluous. The idea of such regen systems is to allow the car to decelerate when you remove your foot from the accelerator. But in the RS, these paddles are almost meaningless. 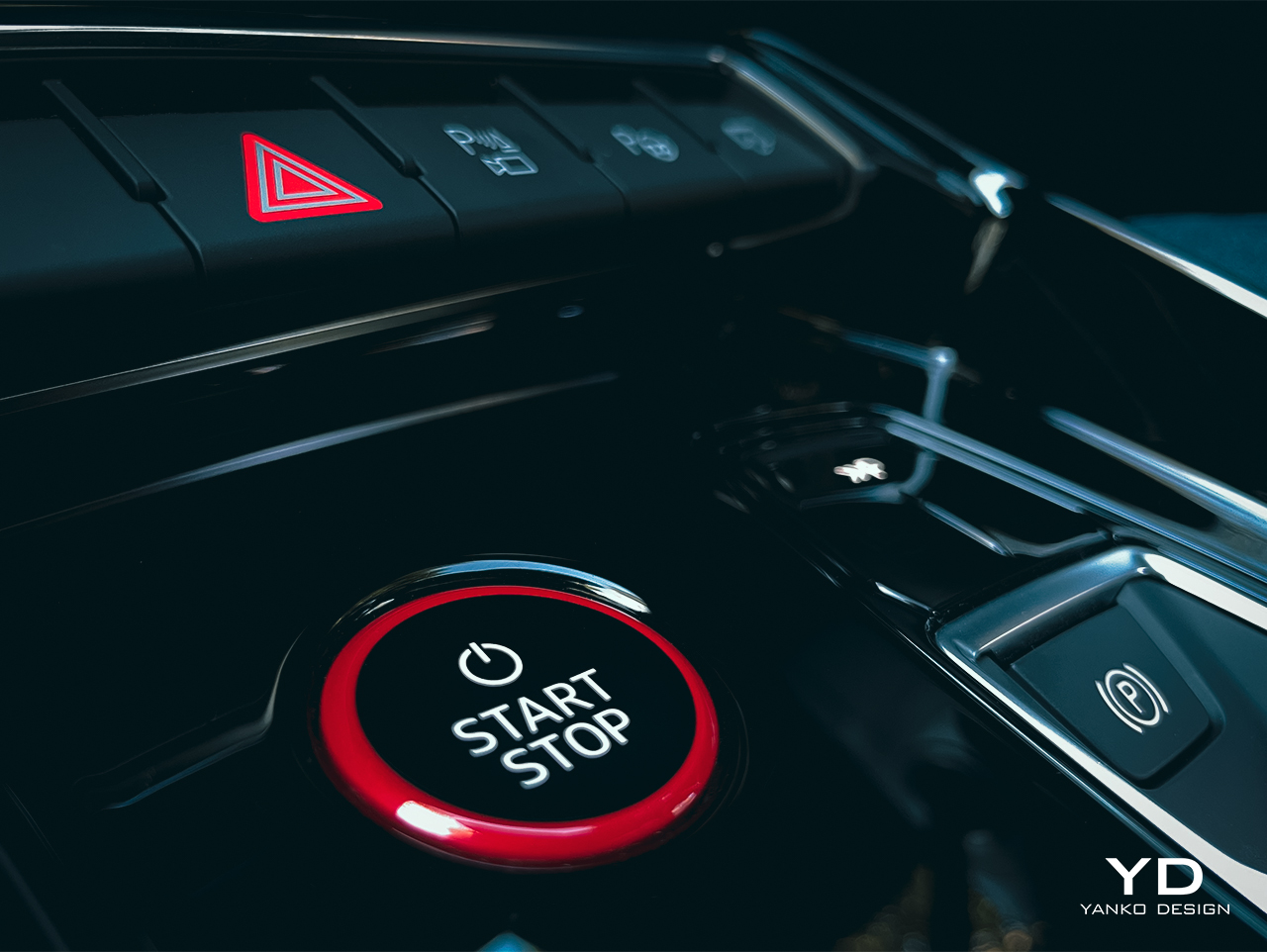 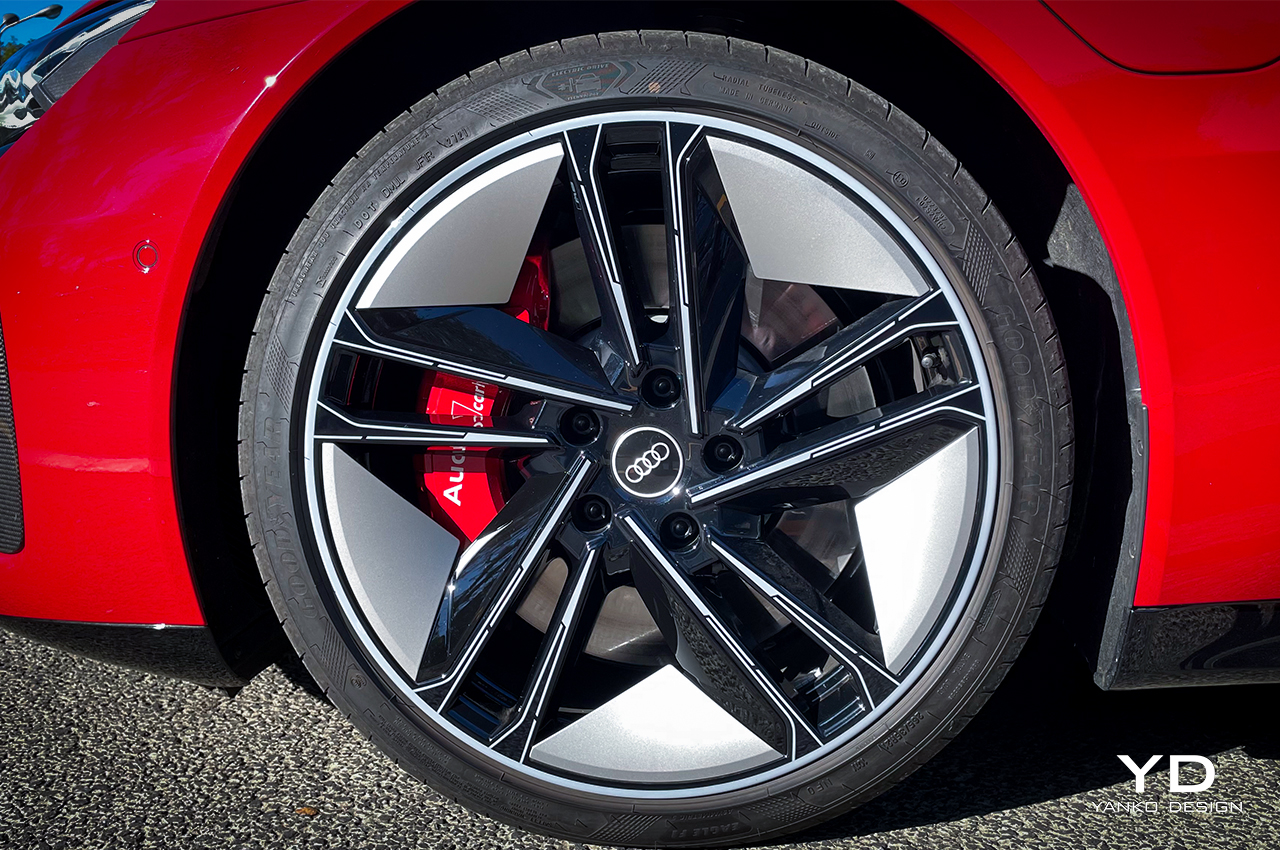 If anyone ever wanted an excuse to switch from gasoline or diesel powered cars to electric, this is the car to do it in. It’s by far the prettiest, it’s nearly as quick as the Taycan but a little more mellow and subtle and has the range to offer a reasonable alternative to internal combustion. The only hurdle is the price. The RS e-tron GT’s base price starts at around $140,000 but can quickly shoot north as you opt for the $20,350 Year One Package that adds on rear-wheel steering, 21-inch Goodyear Eagle F1 tires, carbon-ceramic brakes and Audi’s LED laser headlights. Tack on $595 for a special paint job and you’re looking at a fully optioned sticker price of $161, 890. 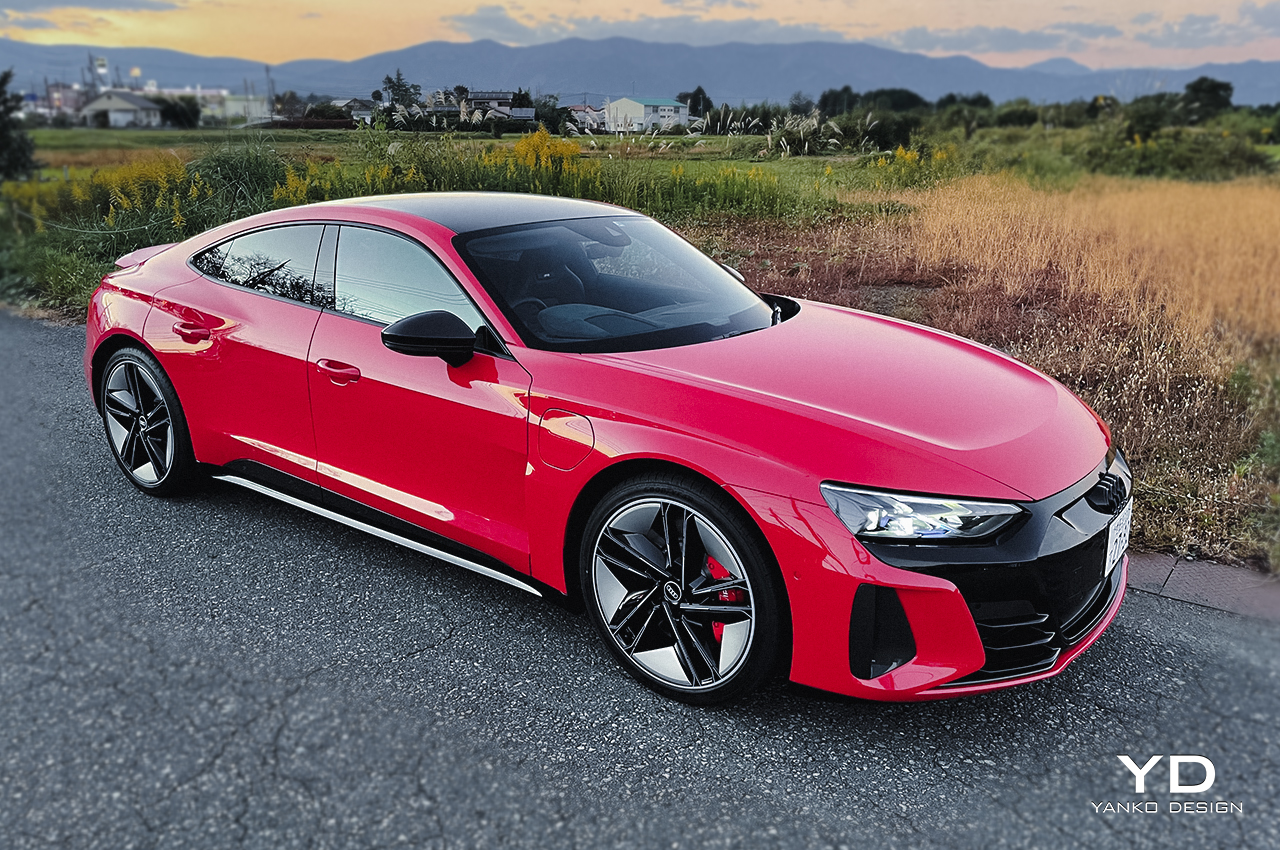 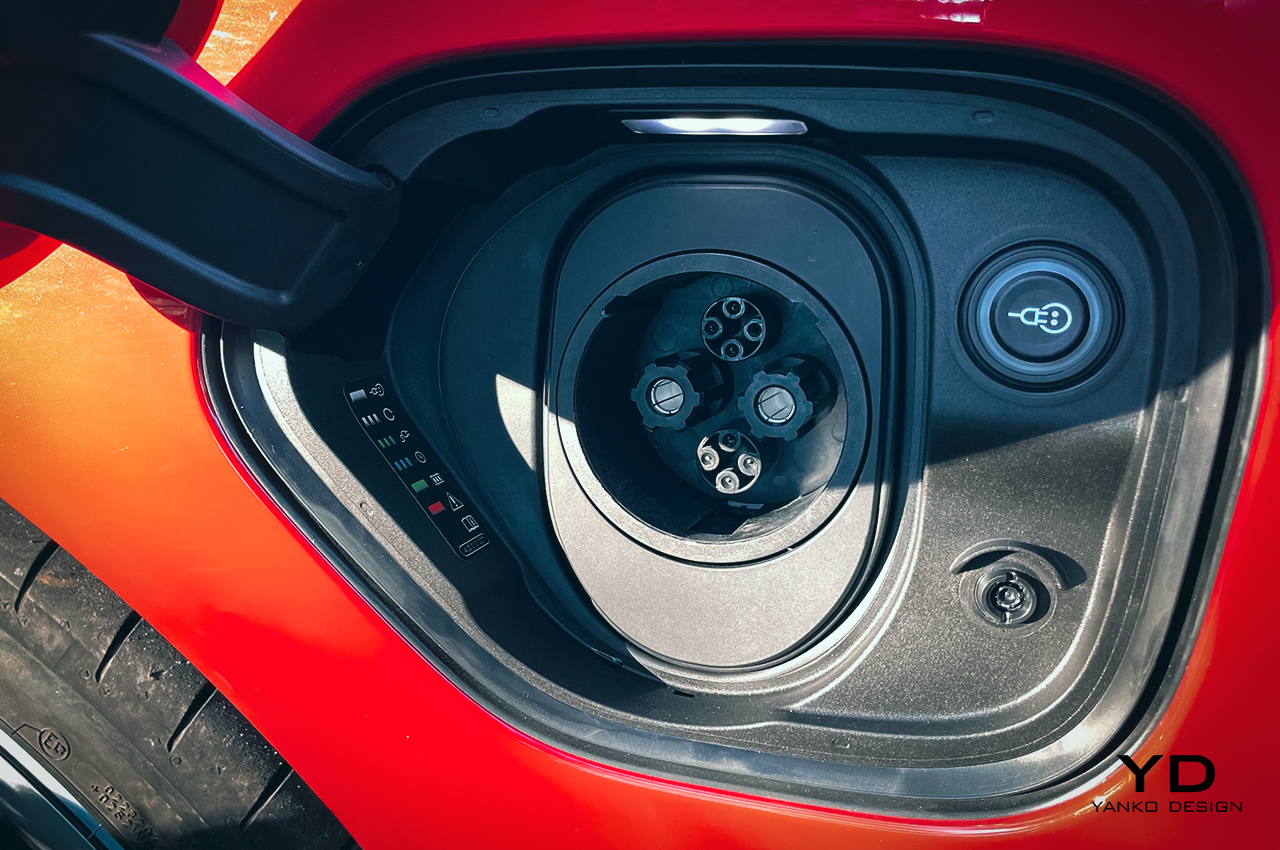 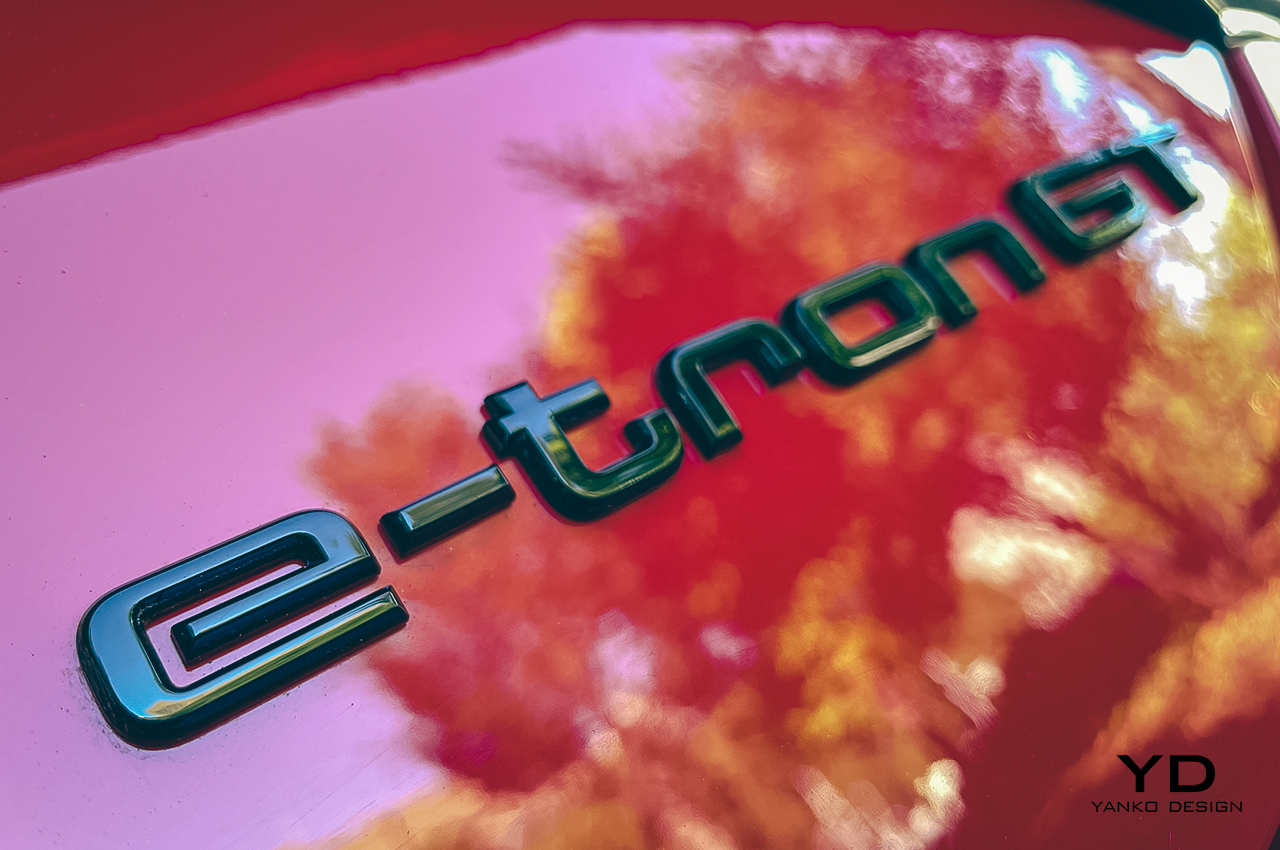 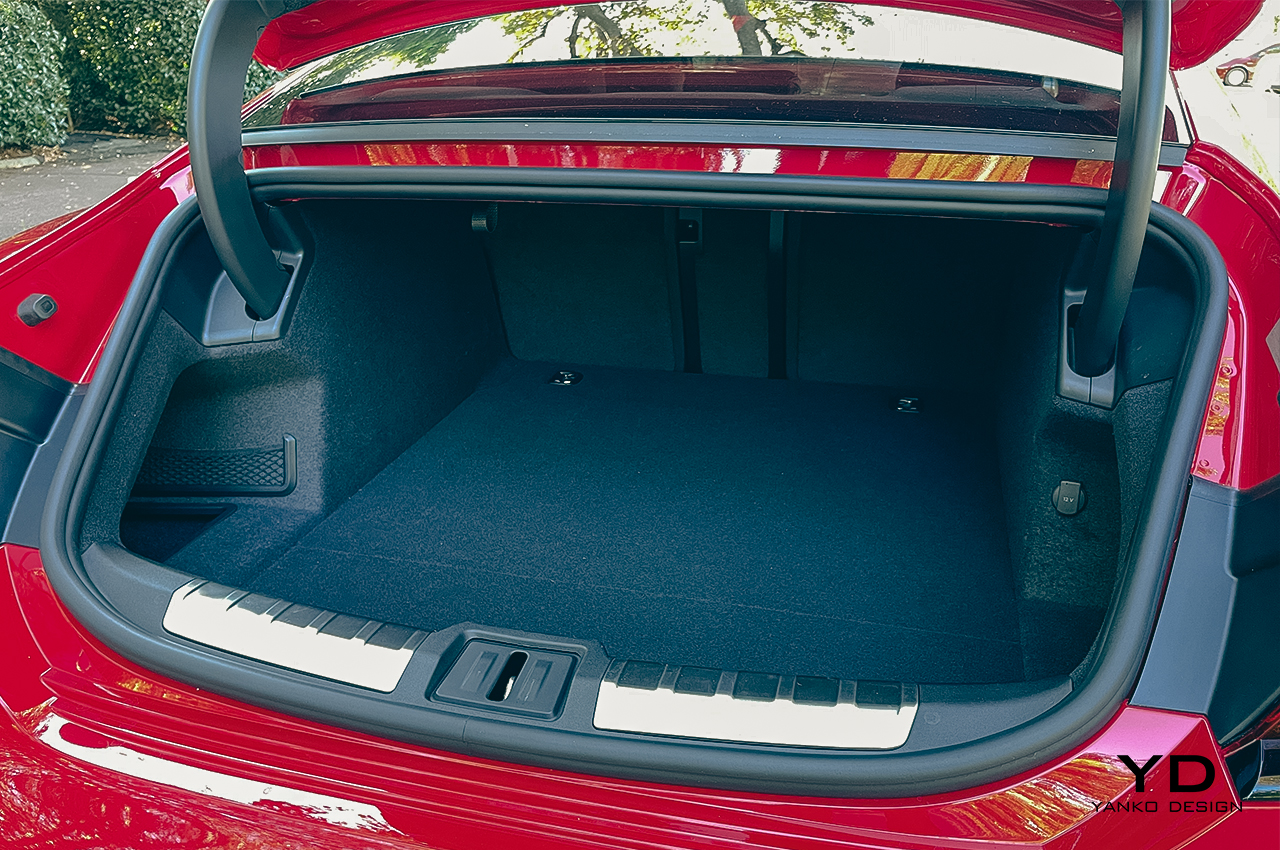 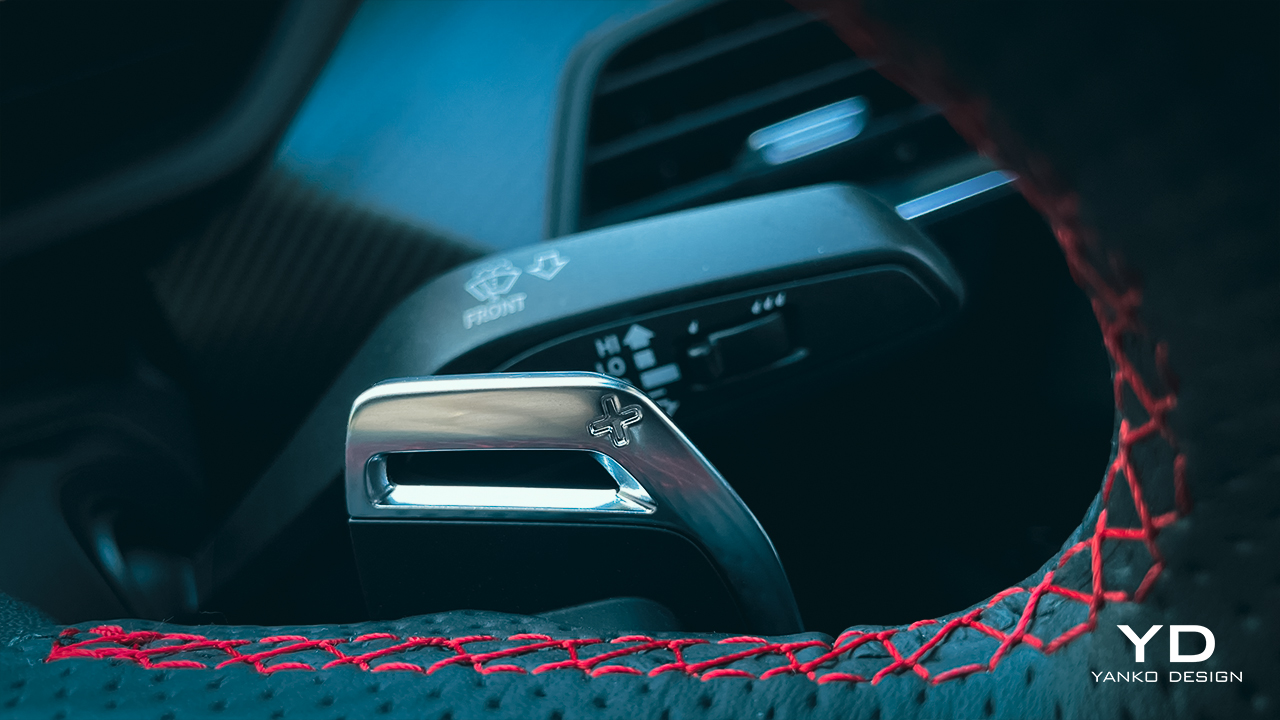 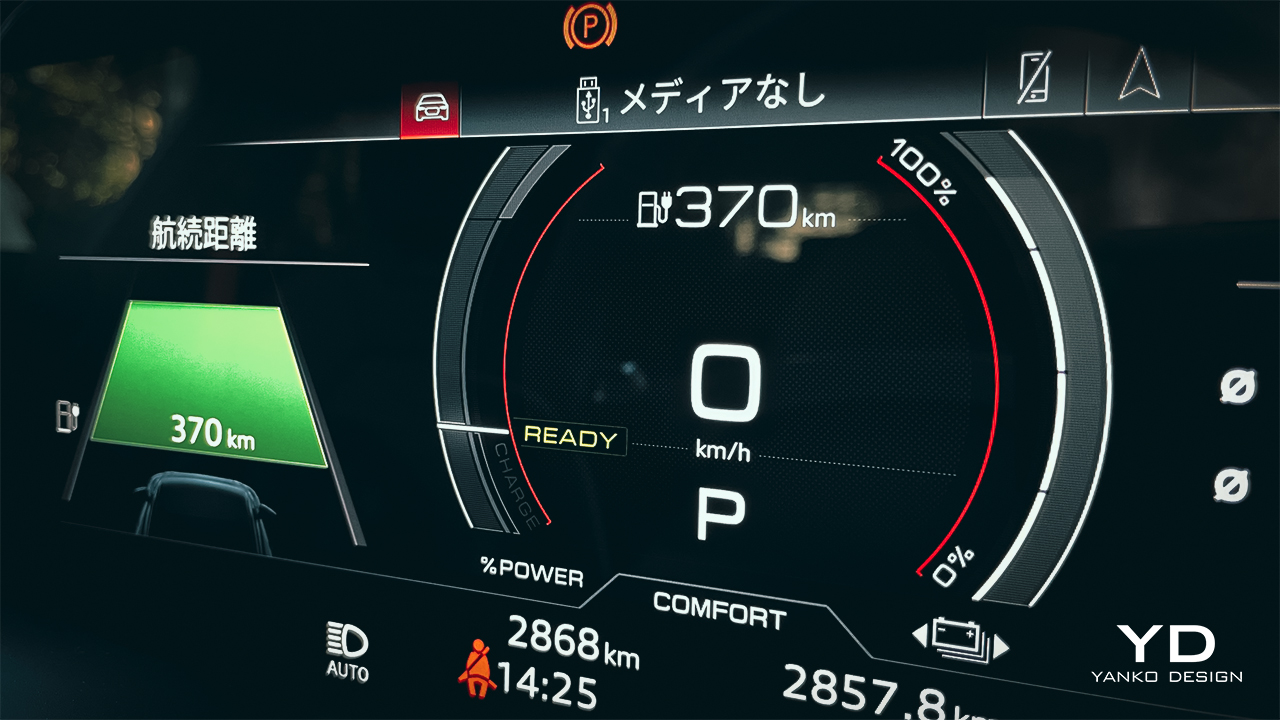 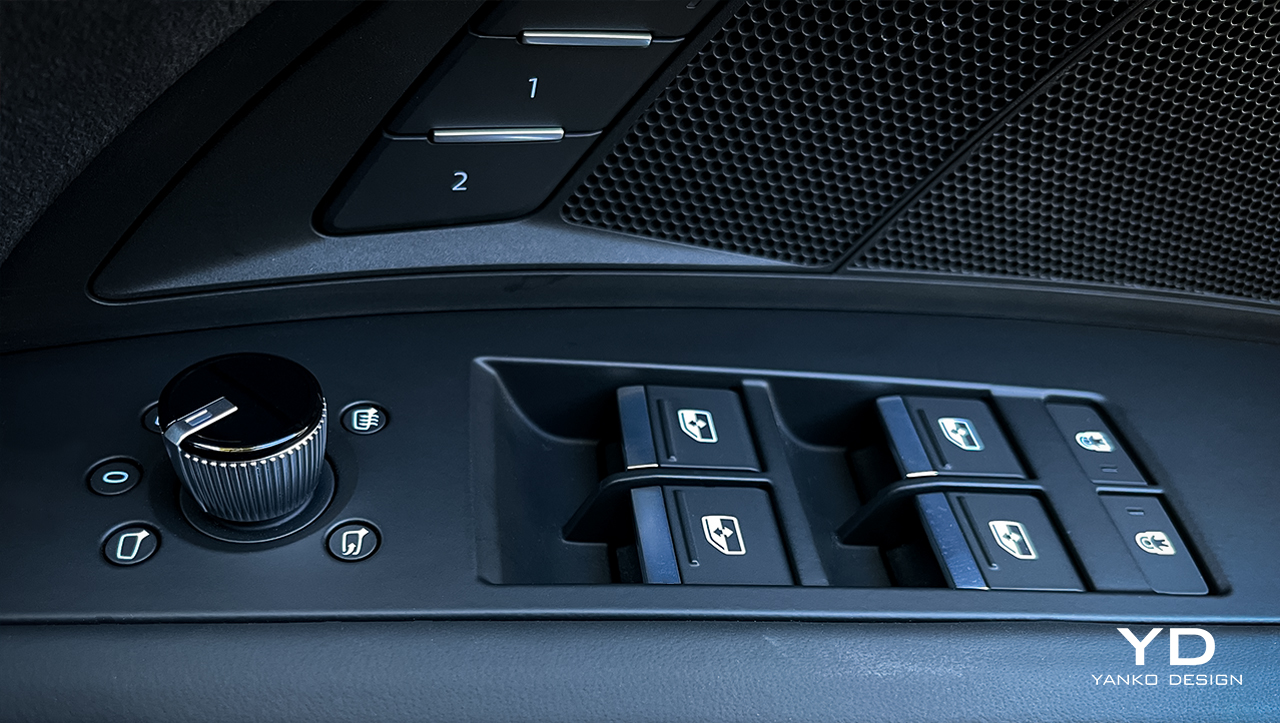 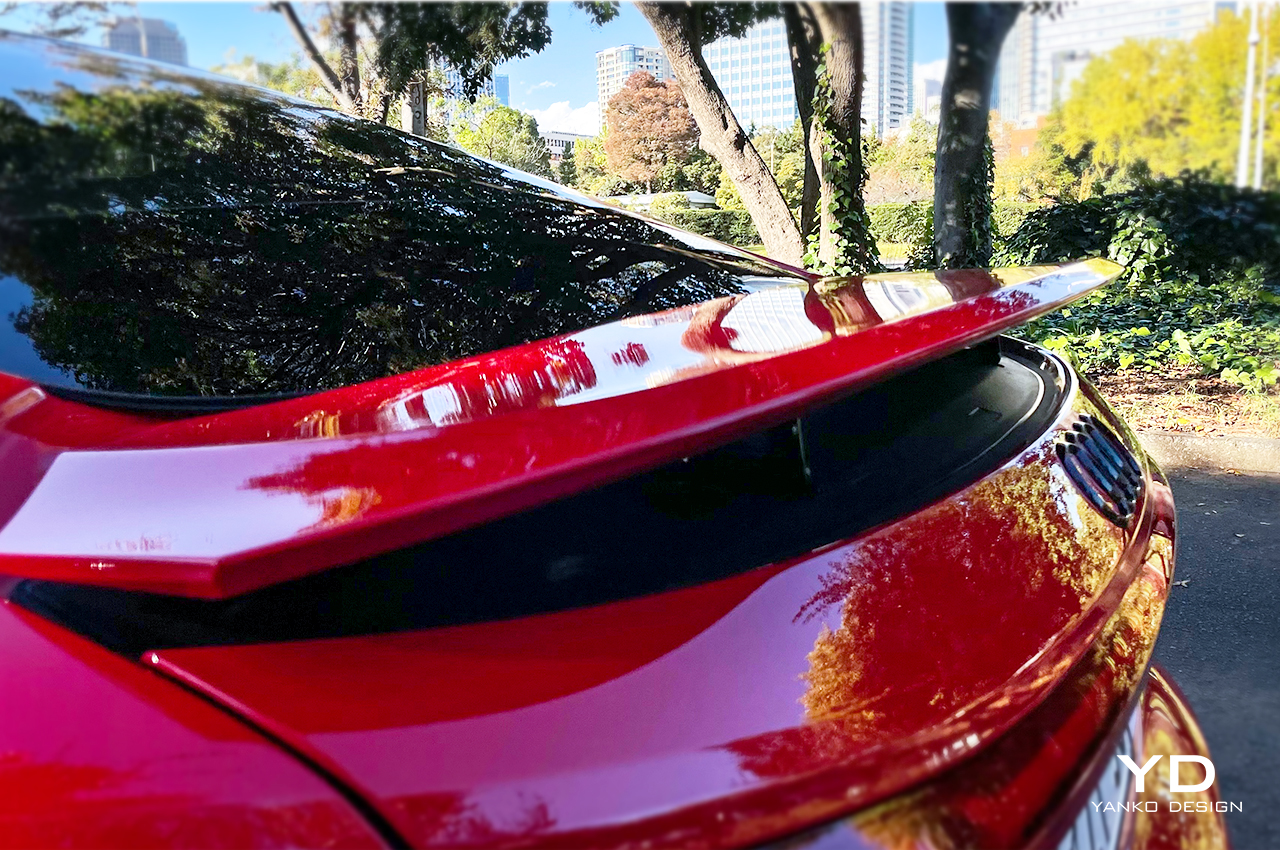 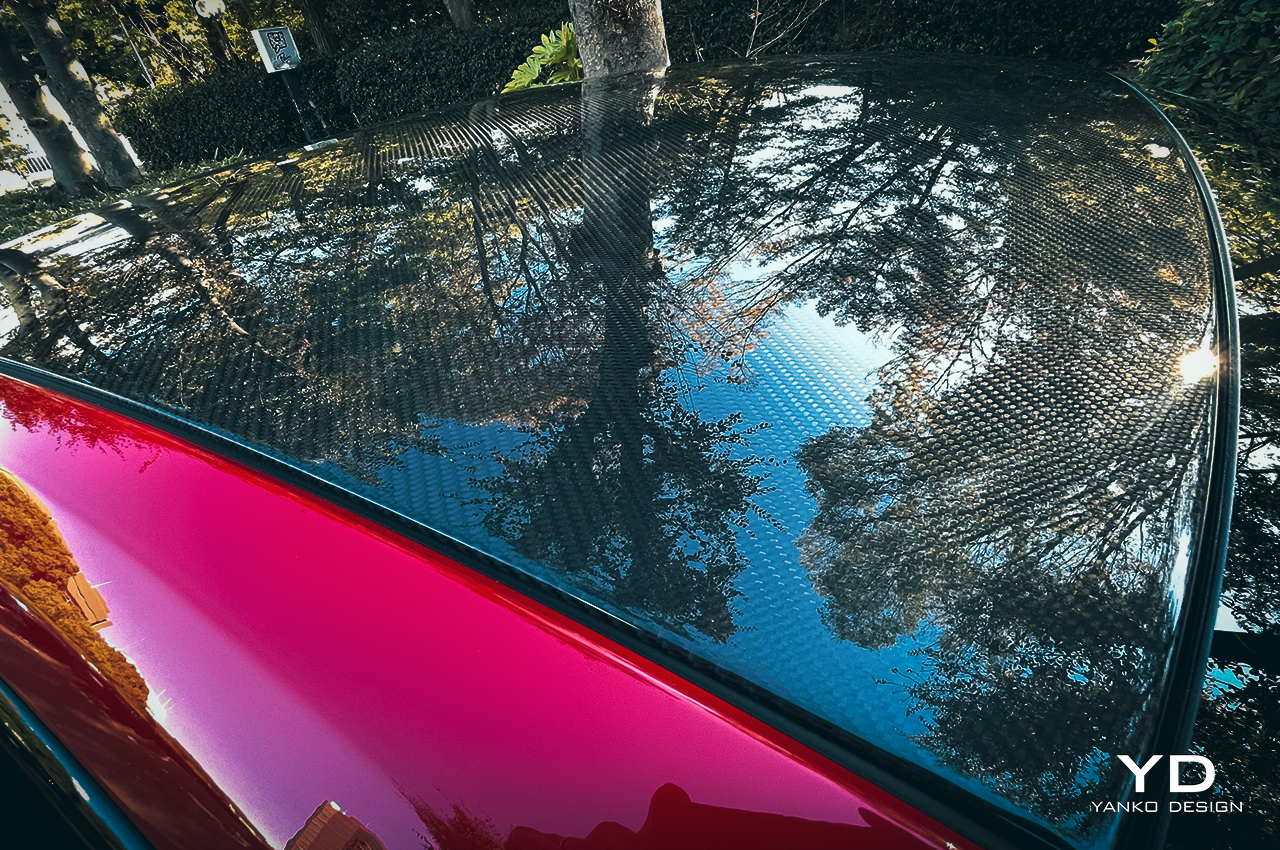 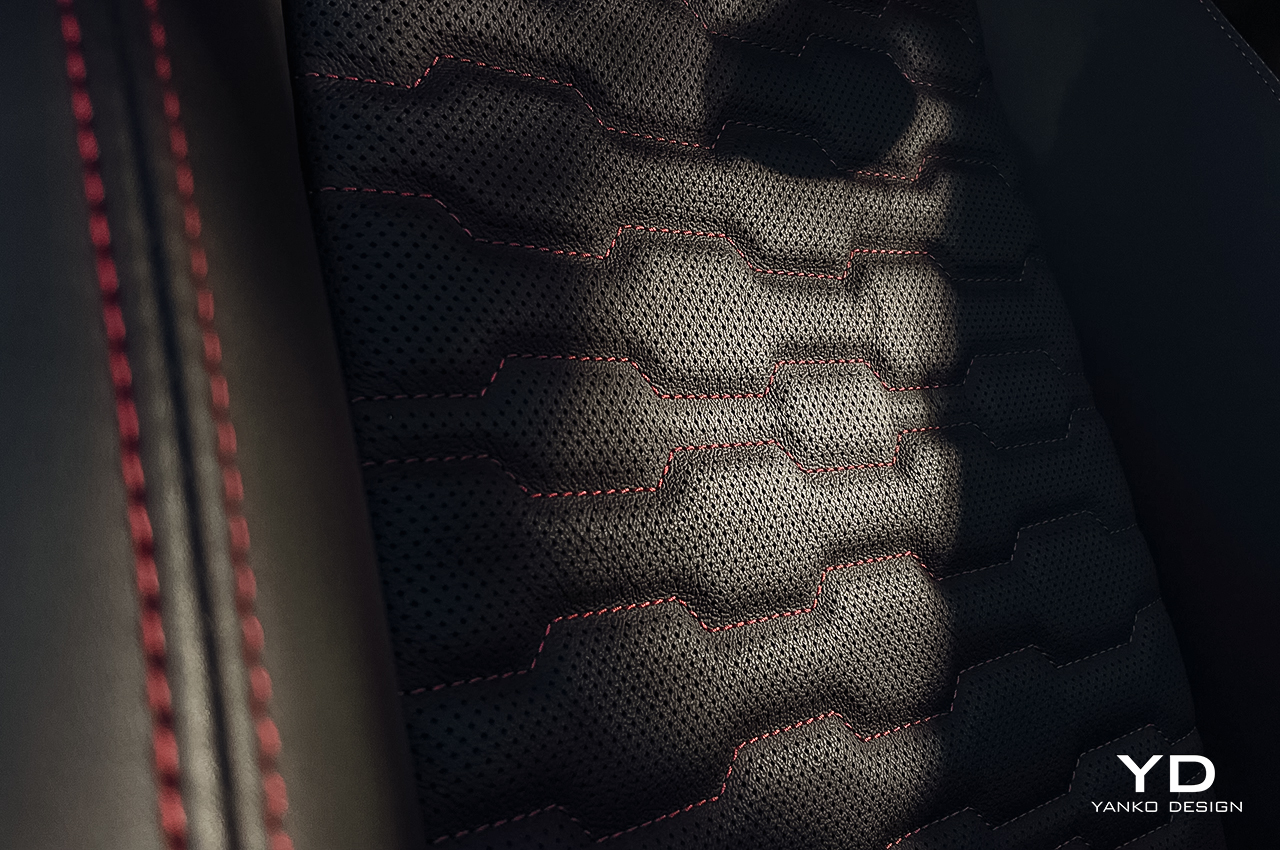 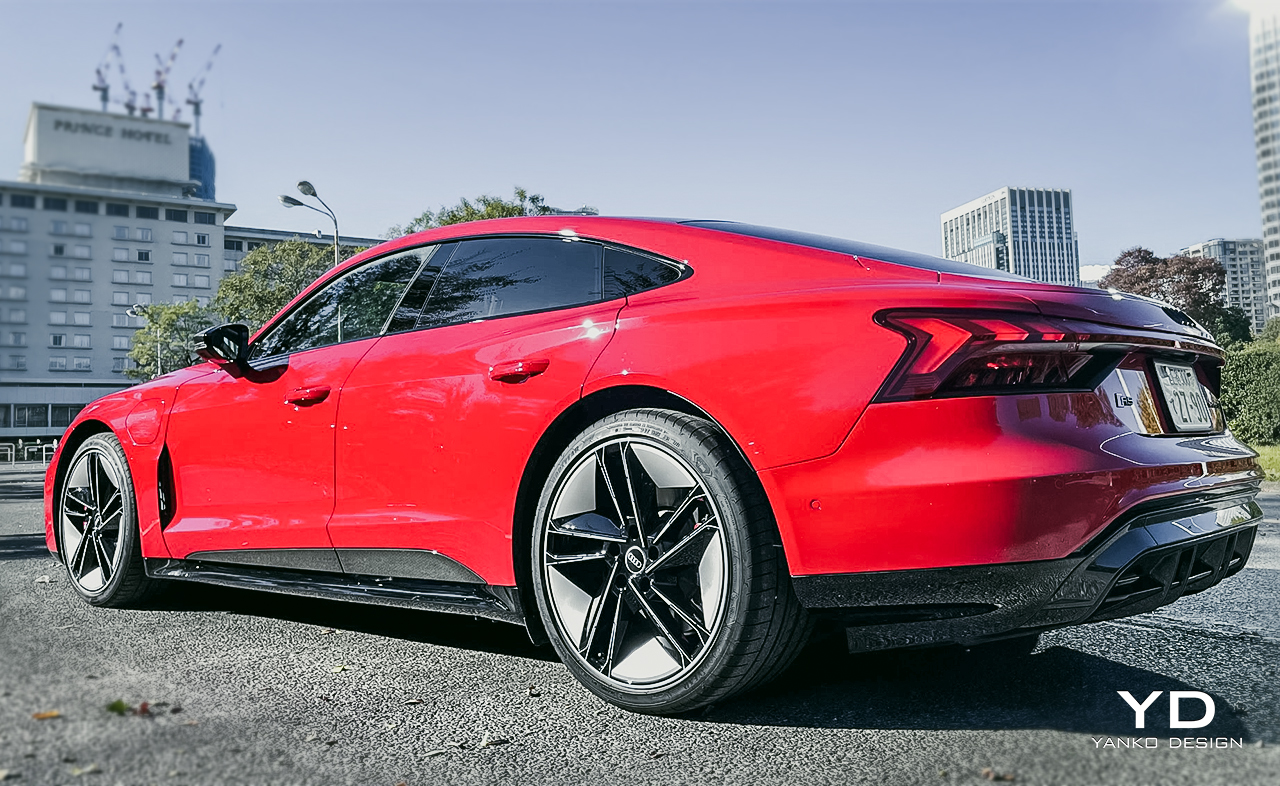