When it comes to great movies, the films themselves are just a part of the experience. The reality is that there’s a lot of interesting stuff happening behind the scenes – stuff that ordinary viewers don’t really get to see. But lucky for us, some curious people actually managed to dig up these secrets and share them with the world.

A little while ago, one Reddit user movie buffs to share some of the most interesting behind-the-scenes facts they know, and received numerous answers that might change the way you see some of your favorite movies. Check out some of the best answers in the gallery below 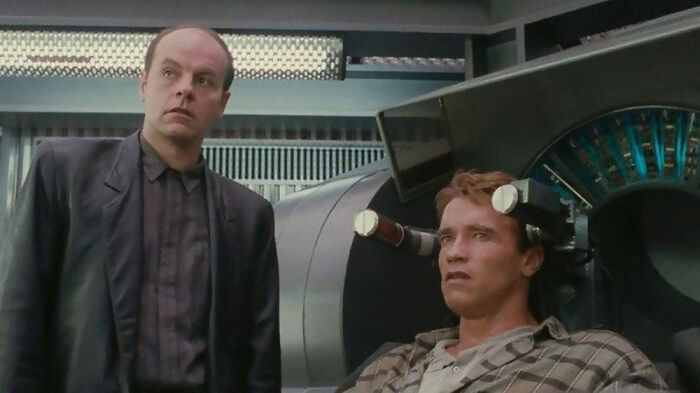 While filming Total Recall, Schwarzenegger noticed the Michael Ironside was constantly on the phone between takes. When he broached the subject with Ironside, he was told the he was phoning his sister and that she was currently suffering from cancer. Arnold immediately brought Michael to his trailer and they had an hour long 3 way conversation with the sister about what exercises to do and what kinds of foods she should be eating and really lifting her spirits. Ironside has never forgotten Schwarzenegger’s kindness and neither has his sister. 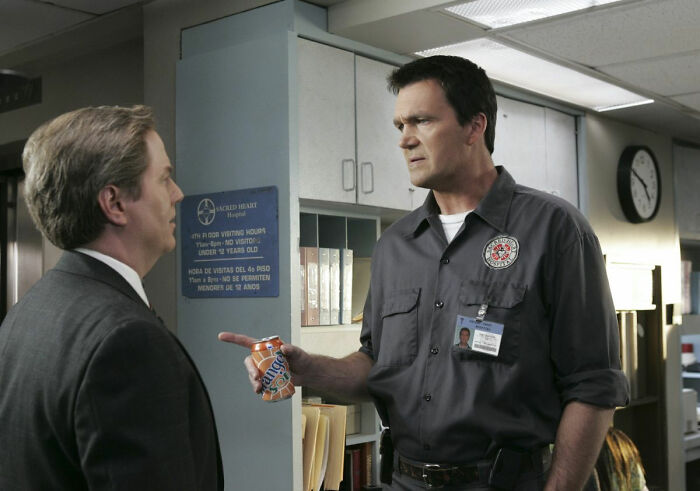 In Scrubs the Janitor almost never read his script and just improvised his role. Bill Lawrence actually said that in the scripts, he had “whatever Neil says” on his lines. 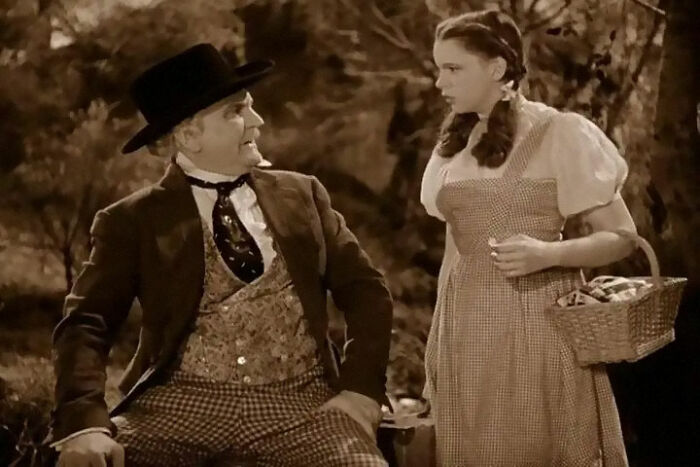 While looking for a tattered coat for the character playing The Wizard in the Wizard of Oz, a costume assistant bought one from a second hand store. When the actor put the coat on he turned the pocket inside out – written in the pocket was the name L.Frank Baum who is the author of The Wizard of Oz books. Baum’s widow later identified the coat as actually having belonged to her husband 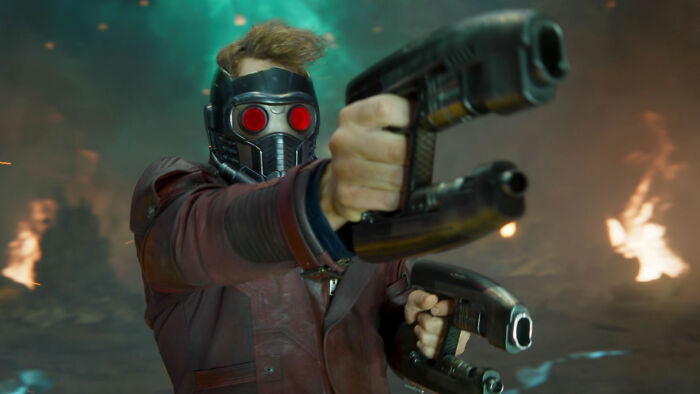 While filming Guardians of the Galaxy, they had to do several takes of some scenes because Chris Pratt kept making the pew pew sounds when he fired his raygun. 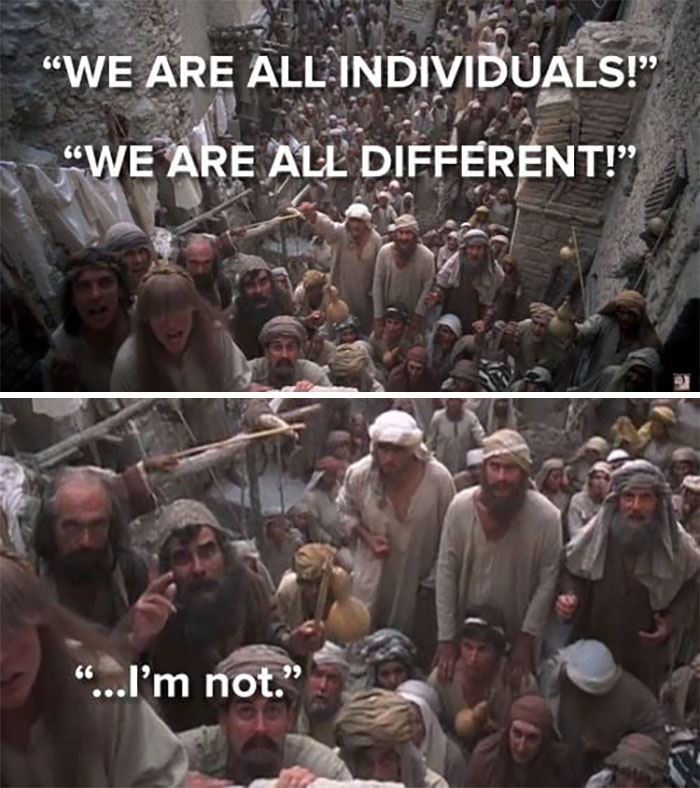 In Life of Brian, the line after “yes, we’re all individuals”, “I’m not!” was ad-libbed, bumping the extra up in pay for now having a distinct speaking role.

During the filming of the Lord of the Rings, Christopher Lee corrected Peter Jackson on the sound of being stabbed in the back.

From the DVD commentary:

“When I was shooting the stabbing shot with Christopher, as a director would I was explaining to him what he should do”… “And he says, ‘Peter, have you ever heard the sound a man makes when he’s stabbed in the back?’ And I said, ‘Um, no.’ And he says ‘Well, I have, and I know what to do.’ “”

He had been involved in some super secret operations for the British during WWII, which is presumably where he knew that from.

An actual robber was fleeing a drug store (or some such similar establishment) and turned the corner onto the set of the finale of Leon (The Professional), in which Leon’s building is completely surrounded by cops. Upon seeing an army of actors dressed as policemen, the robber immediately surrendered. 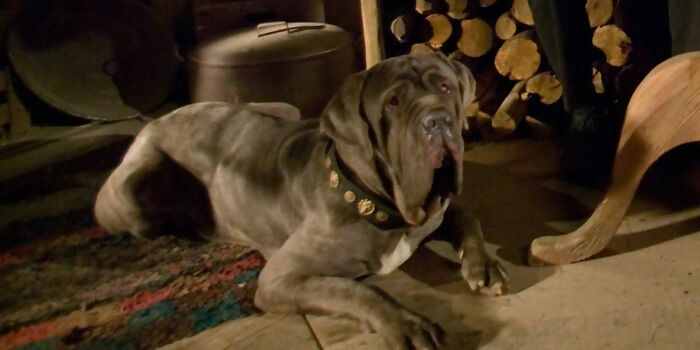 While filming Harry Potter and the Chamber of Secrets, Bella, the Neapolitan mastiff that played Fang, got very protective of Daniel Radcliffe, and would jump in front of him whenever the animatronic spider for Aragog would come out to defend him, resulting in then having to refilm the scene multiple times. 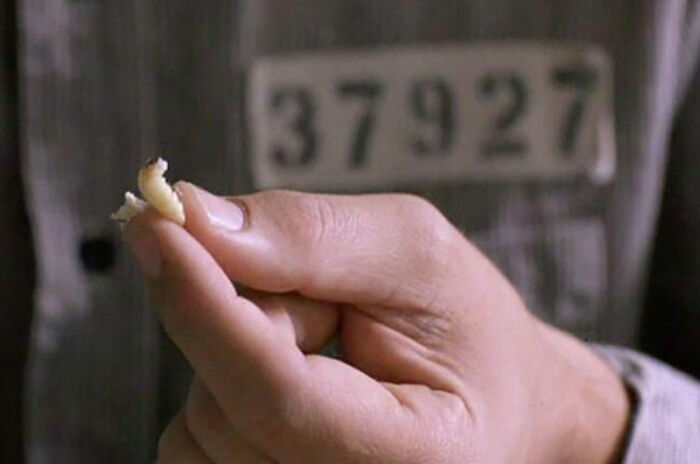 In The Shawshank Redemption, there’s a scene where a guy feeds a maggot to a crow.

The American Humane Association made them find a maggot that had died of natural causes to feed to the crow. They wouldn’t have given the “no animals were harmed in the making of this film” at the end if they hadn’t.

In Apollo 13, they filmed in NASA’s “vomit comet”, a plane that flew at high altitudes and would create parabola movements to simulate a short period of low gravity. They built the Apollo spacecraft set inside the plane and almost every scene featuring zero gravity was filmed in the plane. They flew over 500 times in the parabola. From the time that low gravity simulation would start, they would only have 23 seconds to unstrap from restraints, set up a shot, roll, and then strap back in. They completed all of these flights in 13 days. THE MOST UNDERRATED MOVIE FACT OF ALL TIME! The only movie ever to film in actual Zero Gravity. 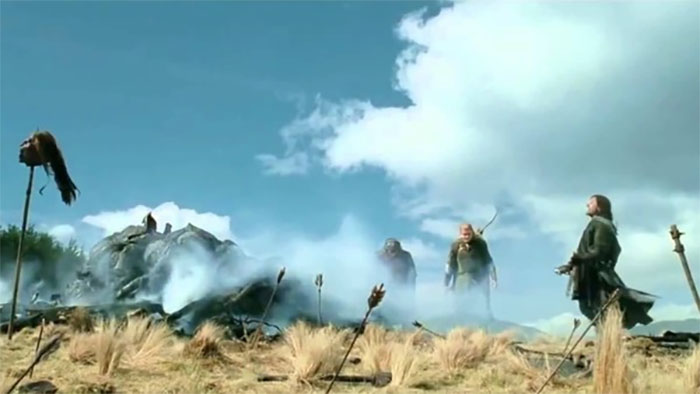 In Lord of the Rings: The Two Towers when Aragon, Gimli, and Legolas are approaching the pile of smoldering and dismembered corpses looking for Pipin and Mary, Vigo Mortensen kicks a helmeted Orc head and screams, thinking the hobbits are dead and gone.

It’s a really good scream and 100% authentic. When Mortensen kicked the head/helmet he broke two of his toes. He used the pain and stayed in character. They kept the scene for the movie. 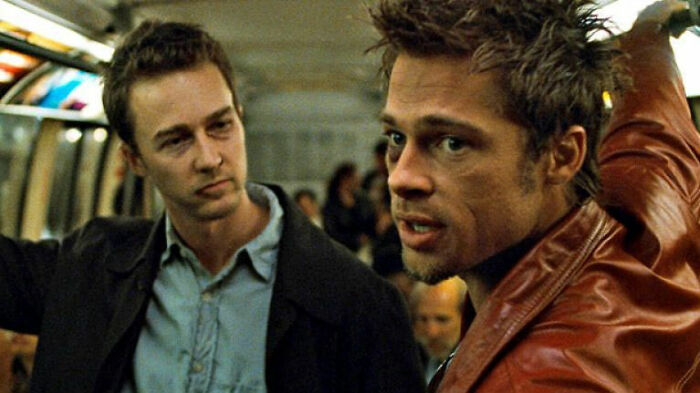 Fight Club was filmed in chronological order, and throughout the filming Edward Norton put himself on a near-starvation diet and avoided the sun, while Brad Pitt spent a lot of time at the gym and in tanning salons. The end result is we see Tyler Durden getting stronger and healthier while the narrator withers away.

In avengers, Robert Downey Jr would hide food around the sets and eat them while filming. The crew would attempt to find his stashes but never(?) did. All those times he was eating on screen were unscripted. 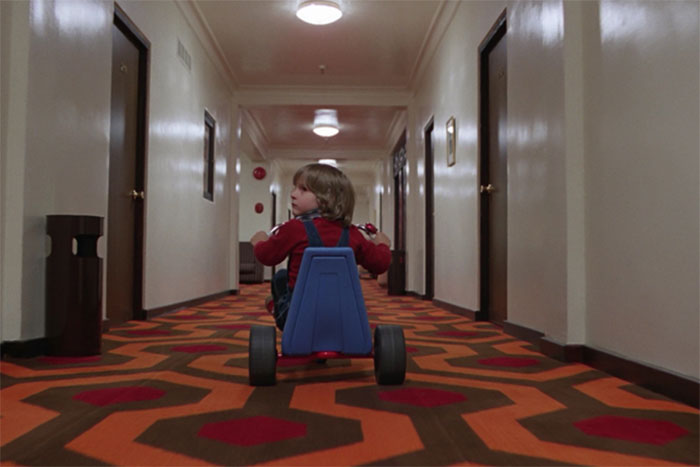 I think it was in the Shining, the kid didn’t know they were making a horror movie.

Monty Python’s Life of Brian stirred so much controversy that production company EMC pulled the funding just days before filming was set to begin.

George Harrison heard about this and paid for the entire production of the film with his own money. 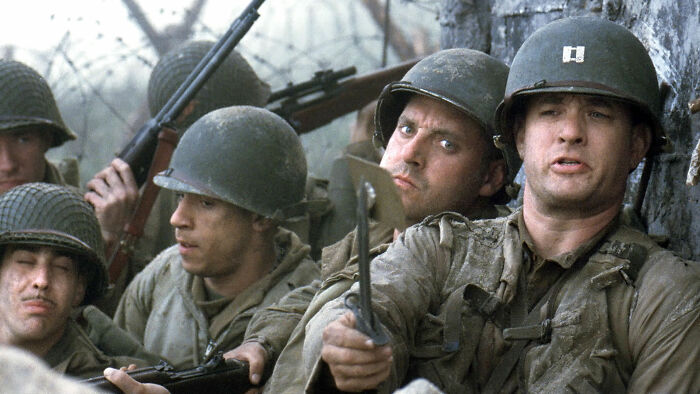 The actors of Saving Private Ryan were put through basic training before filming, EXCEPT Matt Damon so that the other actors would build some sort of unconscious resentment towards his character

During the filming of The Princess Bride, Mandy Patankin’s (Inigo Montoya) father died from cancer. When he came back from the funeral, they had to shoot the scene where he kills the six fingered man. It gives him a special fire in his eyes when he says “I want my father back, you son of a b*tch”. 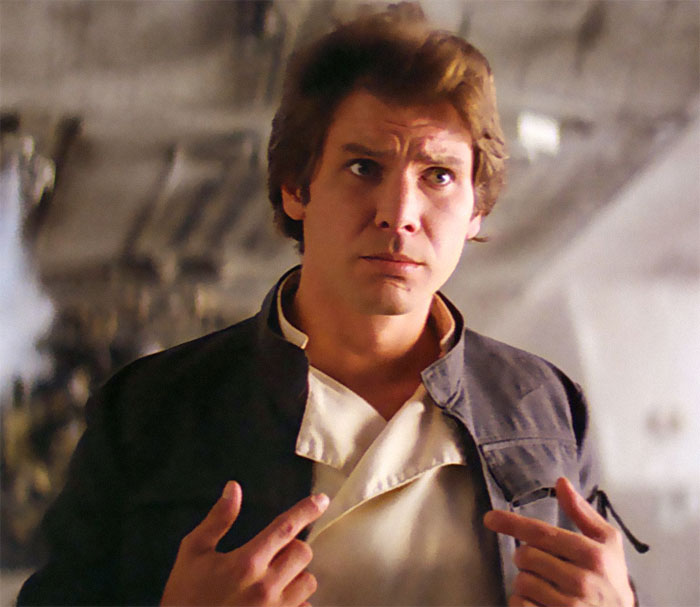 When Coppola and Lucas (close friends and filmmaking buddies) were planning Apocalypse Now (which George Lucas was originally supposed to direct) they gave a small role to their carpenter, Harrison Ford, in return for Ford’s work on a desk for Coppola’s office. Ford also got a role in Lucas’ American Graffiti a few years prior this same way.

During the casting for Star Wars, Lucas needed someone to read Han Solo’s lines while actor’s auditioned for Luke. He quickly asked Ford to do it, and afterwards, one of the producers there came up to Lucas and pointed out that he already had his Han Solo in Ford. (Thus beating out Kurt Russell for the role). 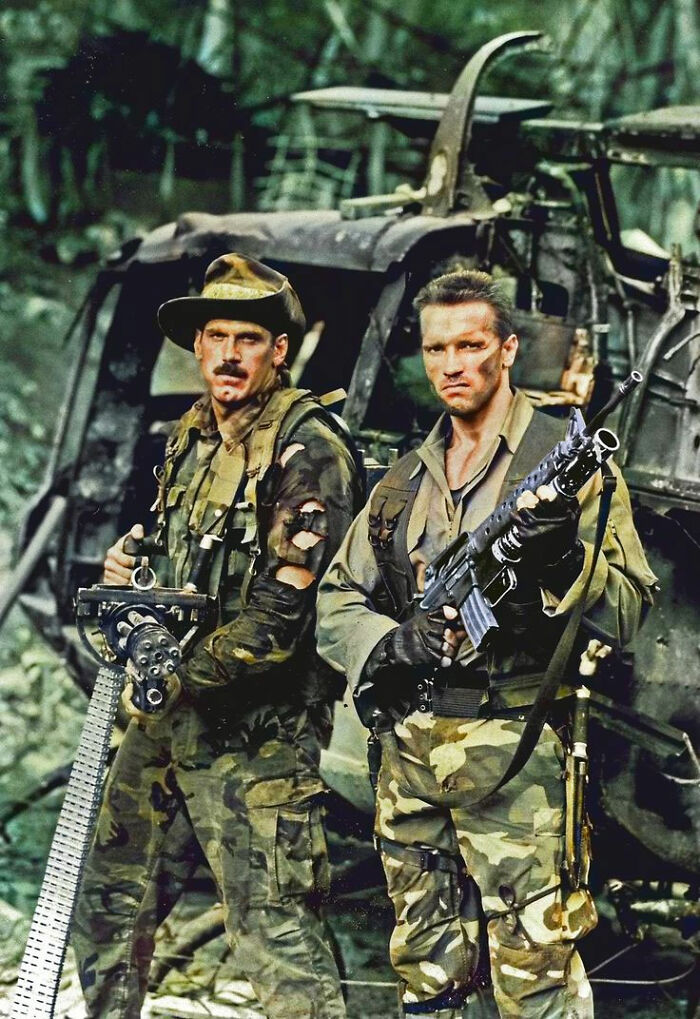 One of my favorites is from Predator

In Requiem for a Dream, there is a scene where Ellen Burnstyn gives a monologue about how terrible it is to grow old and useless (a scene credited for her Best Actress nomination). Unlike the rest of the movie where every shot is very carefully planned and framed, the camera here goes all shakey and off center.

This was not planned or intended, and director Darren Aronofsky started to throw a fit as soon as the scene was cut, because Ellen Burnstyn had just delivered an amazing performance and the cinematographer had screwed it all up.

As it turns out, the filming was screwed up because the cinematographer was so moved by Burnstyn’s performance that he was crying uncontrollably – he couldn’t hold the camera still, and couldn’t see because his crying fogged up the eyepiece.

They used that cut in the final film. 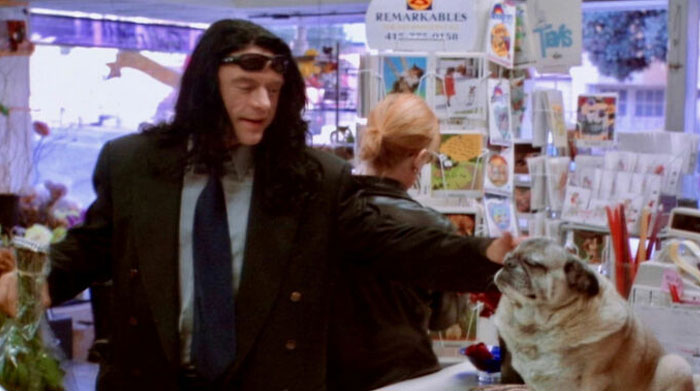 In the flower shop scene in “The Room”, when Johnny says “oh hi, doggy”, that was a genuine reaction. He didn’t realize that the dog was – in his own words – “a real thing”. 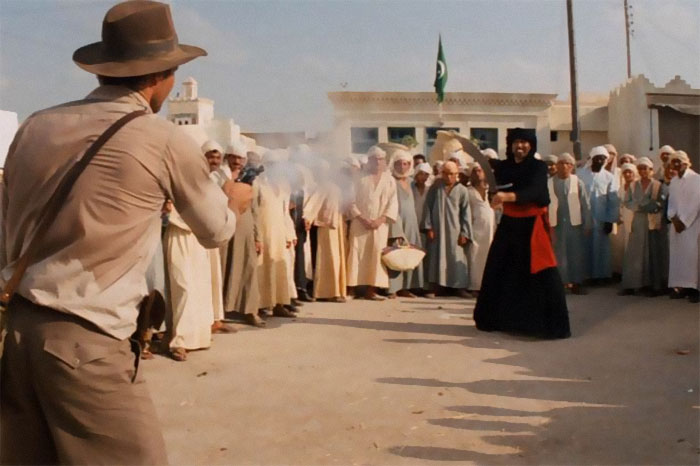 I like the one about Raiders of the Lost Ark where Indy shoots the sword fighter. He was supposed to fight him in a shoot that would’ve taken 3 days. However Ford was really sick from dysentery and so convinced Spielberg to do it this way.

Don’t know if it’s that great, but it’s my favourite:

In the Dark Knight, whenever The Joker is leaving the hospital as it explodes and then pauses to fiddle with the detonator when the explosions stop, that wasn’t supposed to happen and Heath Ledger fiddling with the detonator was ad libbed and Nolan decided to keep rolling and include it in the film

This is a smaller one than the plethora of LOTR info already here, but still one of my favorites:

In the movie “The Holiday”, there is a scene in a video rental store where Miles (Jack Black) is introducing Iris (Kate Winslet) to a variety of famous music from movies – Chariots of Fire, Gone With The Wind, etc. When he gets to “The Graduate”, he starts singing “Mrs. Robinson”, and the camera cuts over to Dustin Hoffman, shaking his head at their conversation.

Dustin Hoffman’s cameo was completely unplanned – he knew the director, saw a bunch of equipment at the Blockbuster, stopped in to say hi, and they wrote his cameo in on the spot. 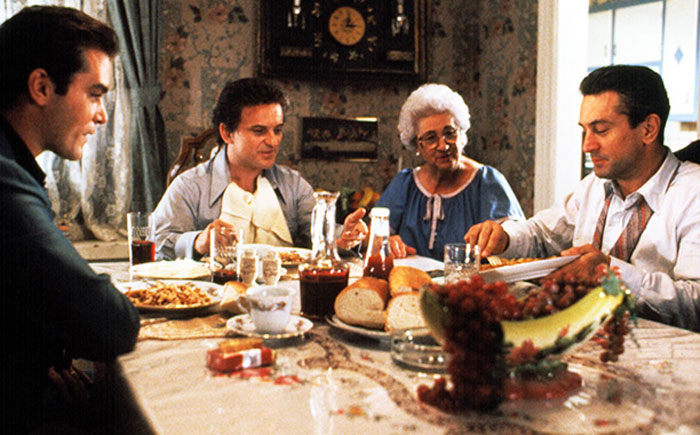 In Goodfellas, the spaghetti they’re eating was cooked by Scorsese’s mother.

The famous scene of Vito Corleone holding a cat was not scripted. He just found a cat. 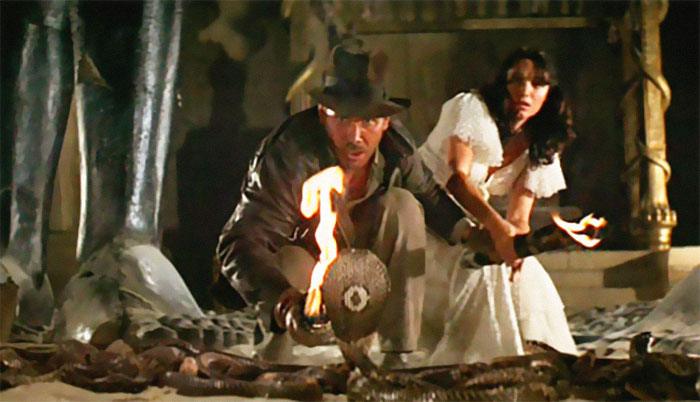 In Raiders of the Lost Ark, the snakes, being cold-blooded, went towards the thrown torch, causing the director to complain at the snakes, “you’re ruining my movie!”

In Alien Resurrection, Sigourney Weaver really did make that no look, over the shoulder basketball shot. Ron Perlman almost blew the take because he was so surprised! 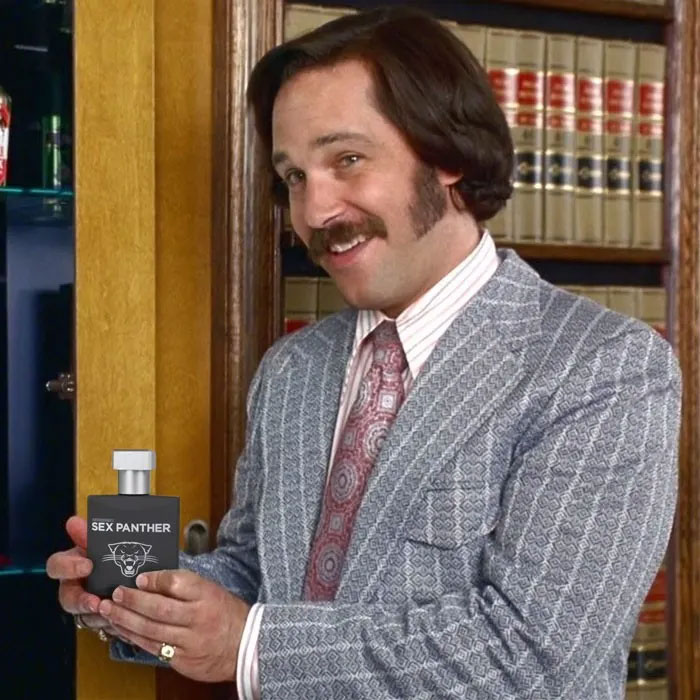 In Anchorman, during the Sex Panther scene, Paul Rudd was determined to make Will Ferrell laugh and break character since it was always the other way around. He thought that this would be accomplished with the “60% of the time it works, every time” line. Will fired back with “that doesn’t even make sense” line without skipping a beat once again making Paul/Others break character yet again.

In Die Hard, when filming the shot of Alan Rickman falling from the window, they gave him a countdown, and then dropped him as they said one.

The shock on his face as he’s released is all real.