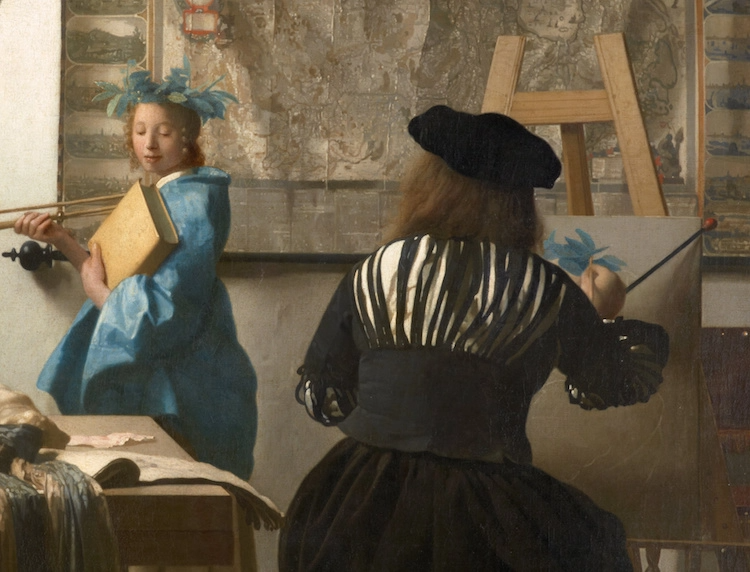 Johannes Vermeer is a master of the 17th century Dutch Golden Age and most famous for his painting titled . His rendition of an ordinary young woman, glancing at the viewer with a shining pearl on her ear lobe, has fascinated art lovers for centuries. Girl with a Pearl Earring—also known as the “Mona Lisa of the North”—is undoubtedly Vermeer’s most enduring work, but the artist created many more masterpieces that are worth celebrating.

Vermeer was devoted to exploring the everyday moments of his historical era, often painting scenes of domestic life. He was dubbed the “Master of Light” due to the way he perfectly painted how natural light danced on the skin, fabrics, and other objects. The master artist rendered his paintings using Renaissance techniques such as , combined with his own signature style of painting light and shadow to evoke texture, depth, and emotion.

Vermeer was a relatively successful painter during his lifetime, yet only 34 paintings are officially attributed to him today. Read on to discover the stories behind five of his artworks. 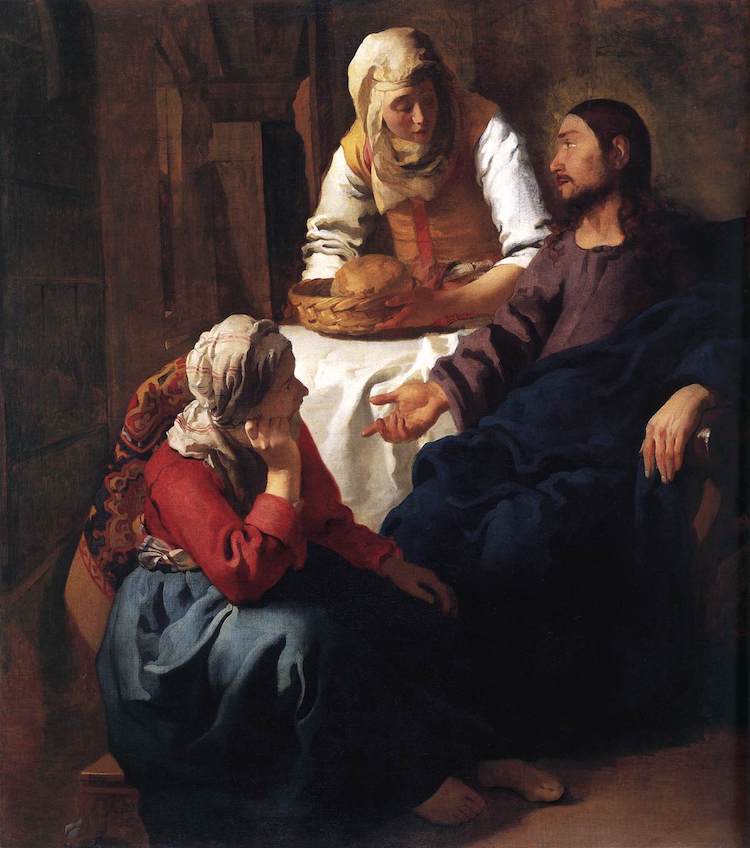 One of Vermeer’s earliest and largest works, Christ in the House of Martha and Mary depicts a biblical scene. It illustrates an intimate moment between Christ and the sisters Martha and Mary, all of whom glow in the warm light of the room. Martha is depicted serving the Son of God some bread, while Mary sits at his feet and listens to him talk.

The two female figures are believed to be personifications of the hard-working Catholic way of life and the more contemplative life of Protestantism. During the time it was painted, Vermeer had just converted to Catholicism. Some historians believe the painting represents the conflict between Protestants and Catholics that occurred within Vermeer’s own country during the time as well as within himself. 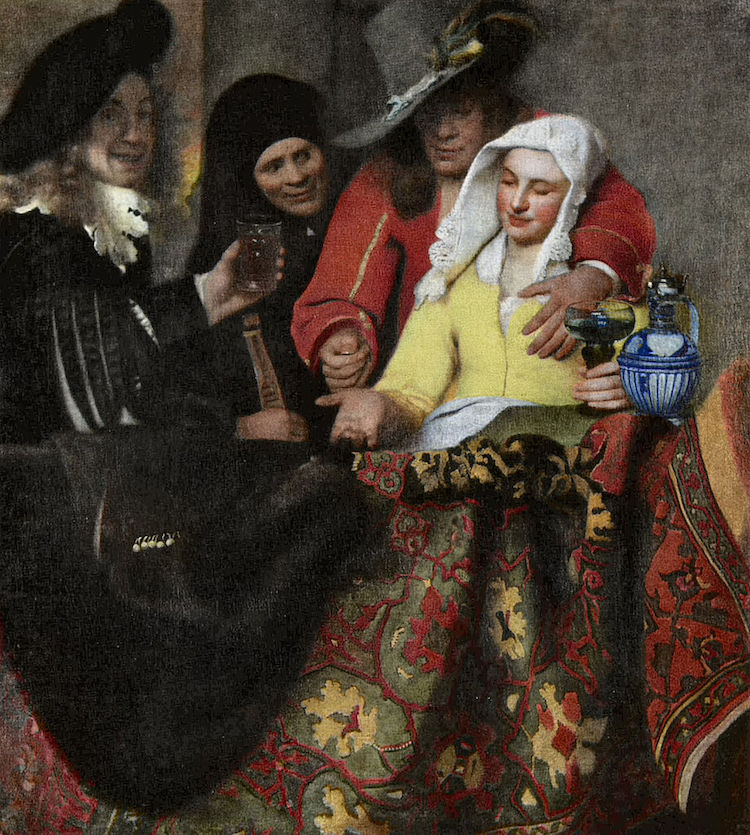 This oil-on-canvas painting was created when Vermeer was just 24 years old. Different from his earlier biblical works, The Procuress is believed to depict a scene from a brothel. It features a woman in pale yellow, surrounded by two men and a “nun” figure in black. The woman in yellow holds out her right hand, ready to receive a gold coin from the man in red. The same man possessively curls around her and places his hand on her breast. His face is hidden in the shadow cast by his wide-brimmed hat, creating a sinister tone. On the left, the composition features another male figure who is elegantly dressed in a beret and a fashionable slit-sleeve jerkin. He holds his drink and a small musical instrument as he smiles towards the viewer, inviting us into the sordid scene. Some believe this dimly lit figure is Vermeer himself, painted as a self-portrait. 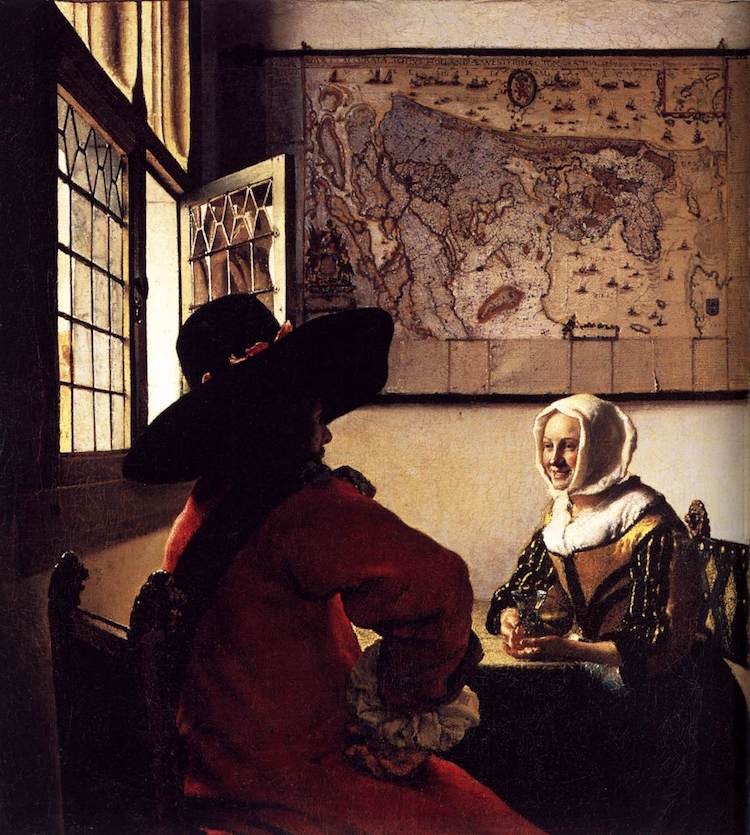 This depiction of 17th-century Dutch life has divided the opinions of art critics for decades. It features a smiling woman dressed in a gold-yellow bodice sitting with a man dressed in uniform with his back to the viewer. Some believe the young woman is a prostitute greeting a wealthy customer, while others believe she is receiving a surprise visit from a man she admires or perhaps loves.

It has been suggested that the female subject resembles Vermeer’s wife, Catharina Bolnes, who is believed to have posed for many of his paintings. Her face is delicately lit by the light coming from the open window. She wears a blue apron over her dress, suggesting that the soldier surprised the woman with an impromptu visit during her morning chores. She holds a glass of wine, illustrating her wealth, and the map on the wall suggests that she is worldly. The man in the painting wears a red coat and an expensive hat, and his rank as an officer is identified by his black sash. With his back to the viewer, his striking presence adds drama and mystery to the mood of the painting.

Some historians believe Vermeer used to help him create perspective in his painting. The “photographic perspective” was noted by artist Joseph Pennell in 1891. He suggested that despite the two figures sitting closely together, the officer is twice the size of the girl. Instead of implementing a mathematical formula or a vanishing point, Vermeer probably used the camera obscura device to show him which size his subjects should be. 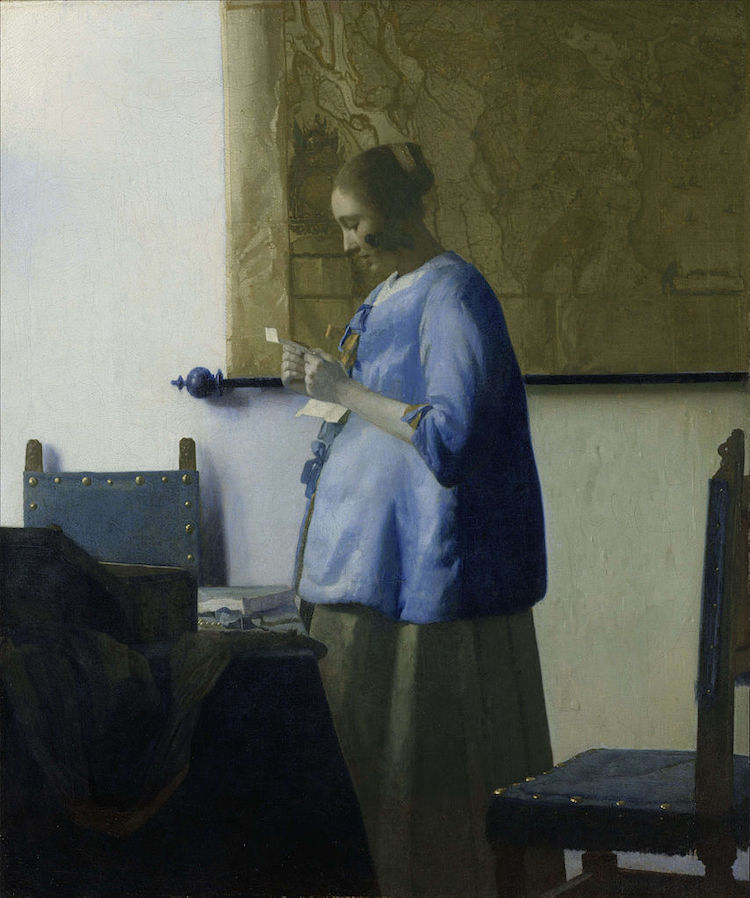 In this painting, Vermeer shares the intimate moment of a woman reading a private letter. The viewer cannot see what it says, but the subject’s facial expression suggests that it’s startling news. A string of pearls and another piece of paper sit on the table in front of her. At the time, pearls were seen as a symbol of virginity as well as wealth, so some critics have interpreted the pearls as the symbol for a lover or a husband. Her rounded stomach suggests that she is pregnant, however, some historians believe that her large form is simply due to the clothing she’s wearing. The map also suggests travel, and that perhaps she’s waiting for her husband to return from somewhere.

The abundance of blue in this painting immediately catches the eye of the viewer. The female subject wears a blue jacket, but the room also features blue chairs and a blue map hanger. Vermeer was known for his love of the hue and often used the expensive in his work. 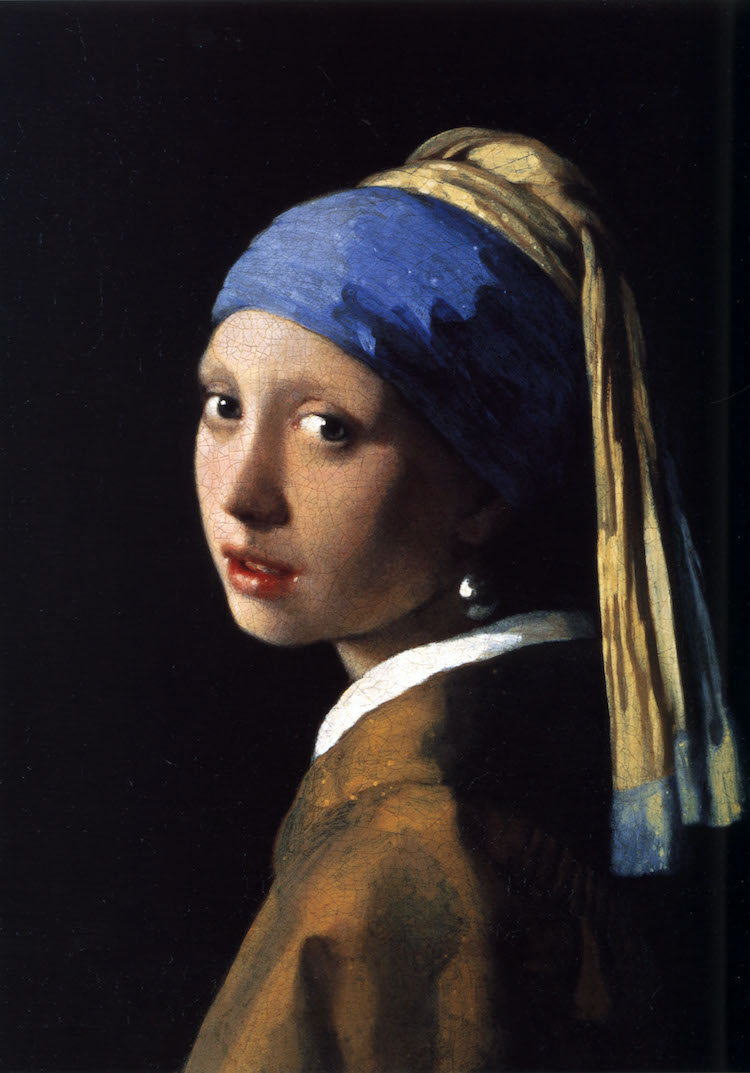 is one of the most recognizable and celebrated paintings in the world. Much like Leonardo da Vinci’s , the painting is shrouded in mystery. It portrays a young woman sitting before a dark backdrop gazing out at the audience with bright eyes and slightly parted lips. She wears a yellow gown, a blue and yellow turban, and a large pearl earring.

Some historians have suggested the elusive subject is either Vermeer’s oldest daughter, Maria, or the daughter of his patron, Magdalena van Ruijven, both of whom would have been 12 or 13-years-old at the time the artwork was painted. However, rather than a true-to-life portrait of a real person, Vermeer’s peers would have recognized this painting as a tronie. Popular during the Dutch Golden Age, a tronie is a painting of an individual intended as a study. At the time, artists opted to portray their subjects wearing “exotic” garments, as rendering opulent fabric allowed them to challenge themselves and show off their advanced painting skills. The play of light is captured on the girl’s face and clothing, offering a “shining” example of why Vermeer is dubbed the “Master of Light.”

Girl with a Pearl Earring remains an iconic image of beauty in , and it even continues to inspire contemporary artists today. “When you think about the Mona Lisa, she is also looking at us, but she isn’t engaging—she’s sitting back in the painting, self-contained,” Tracy Chevalier, the author of the historical novel, Girl with a Pearl Earring, argues. “Whereas Girl with a Pearl Earring is right there—there is nothing between her and us. She has this magical quality of being incredibly open and yet mysterious at the same time–and that is what makes her so appealing.”