The owner of an unusual building in Barcelona faced a lot of obstacles to transform it from a derelict hovel to a comfortable home. To start with, the late 19th-century building in the city’s Borne district was occupied by squatters. The floor slabs were damaged, the stairs were partially demolished, and the building wasn’t up to modern building code standards. Regulatory disagreements and more red tape delayed renovation for years, and even when things finally got underway, the work turned out to be more complicated than expected. To top it all off, the property has a highly challenging layout: it’s narrow but four stories tall, with each level measuring just over 200 square feet. 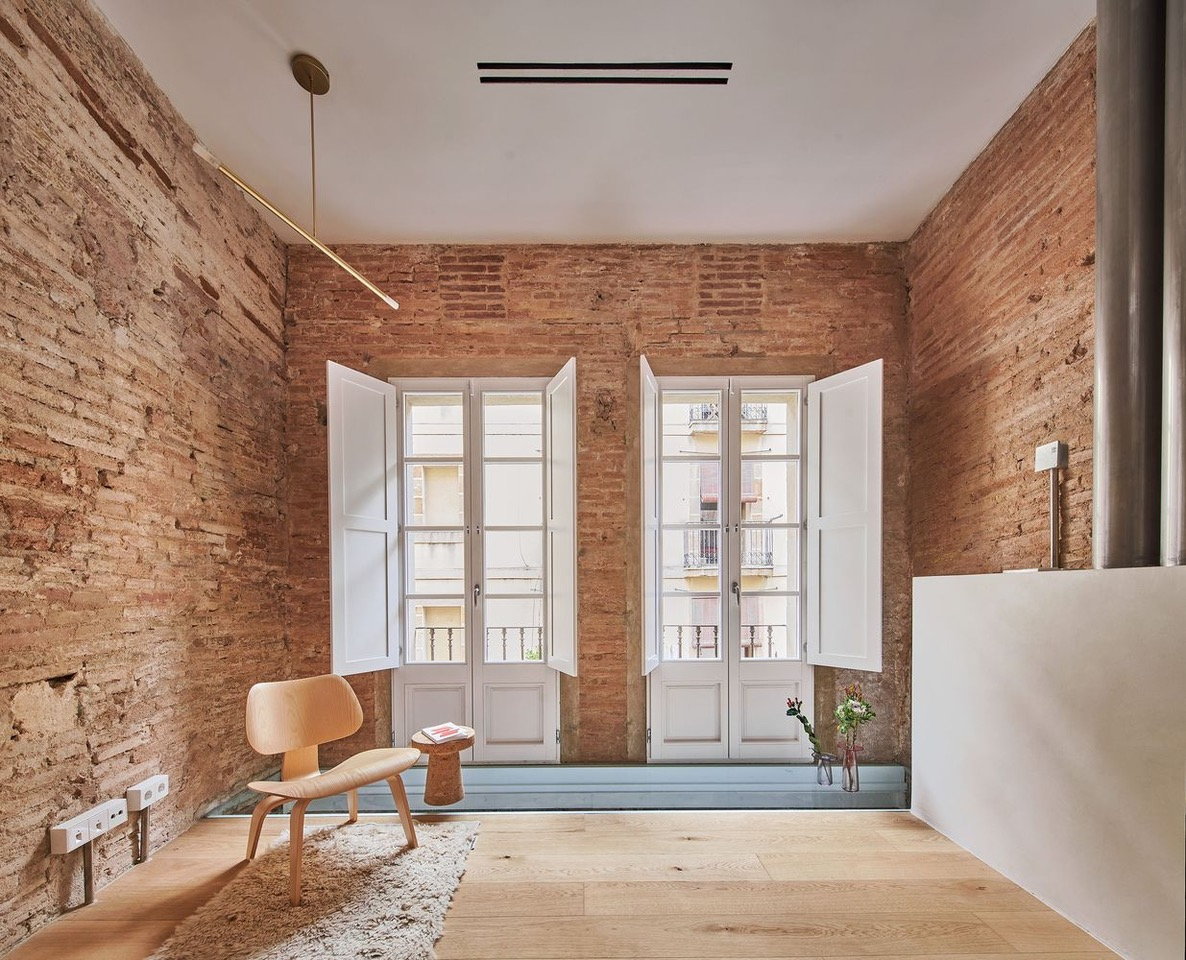 At last, the client was able to hire to give the space a new lease on life. That required ripping out almost everything inside and starting from scratch, maintaining only the facades, dividing walls, and roof slab. As hard as it was to get past all of these hurdles, the slow progression gave the architects a few striking moments of inspiration. They began to see the building as a vessel for what would become its defining feature: a stunning four-story spiral staircase at its heart. 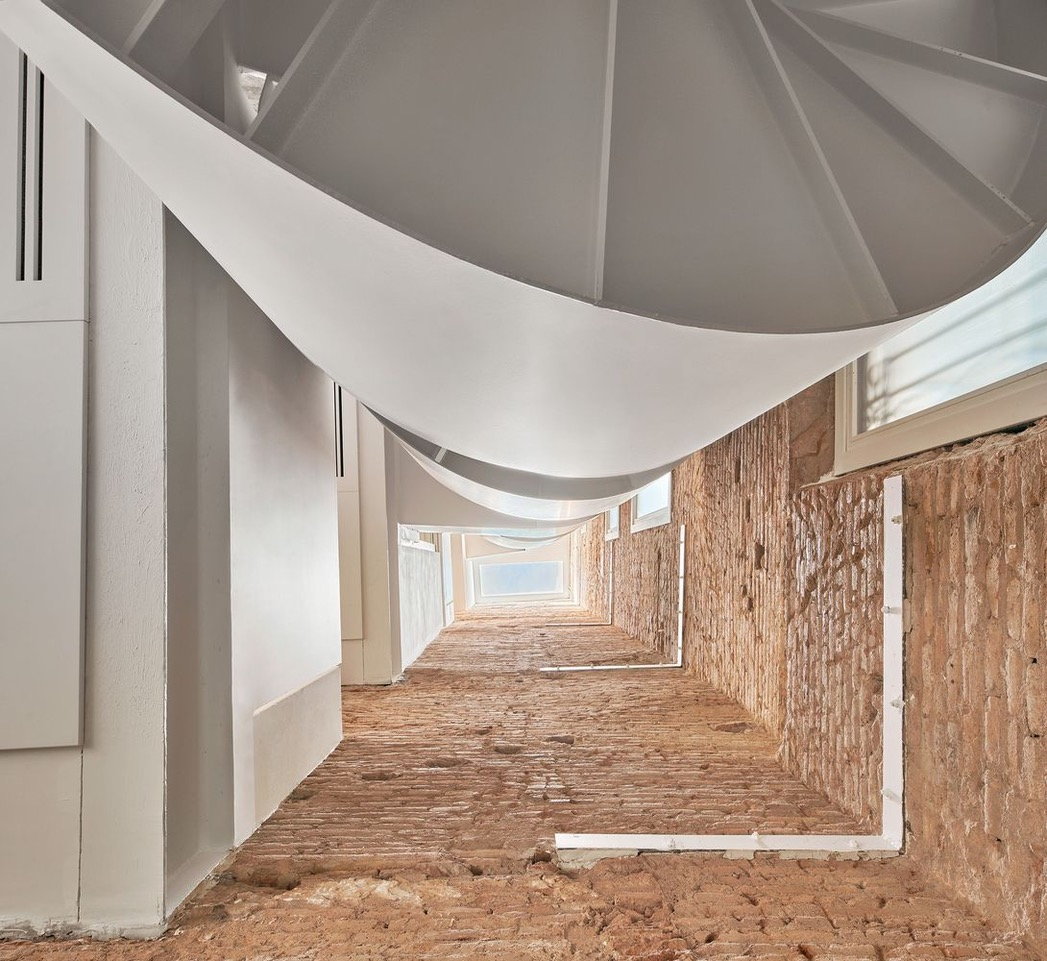 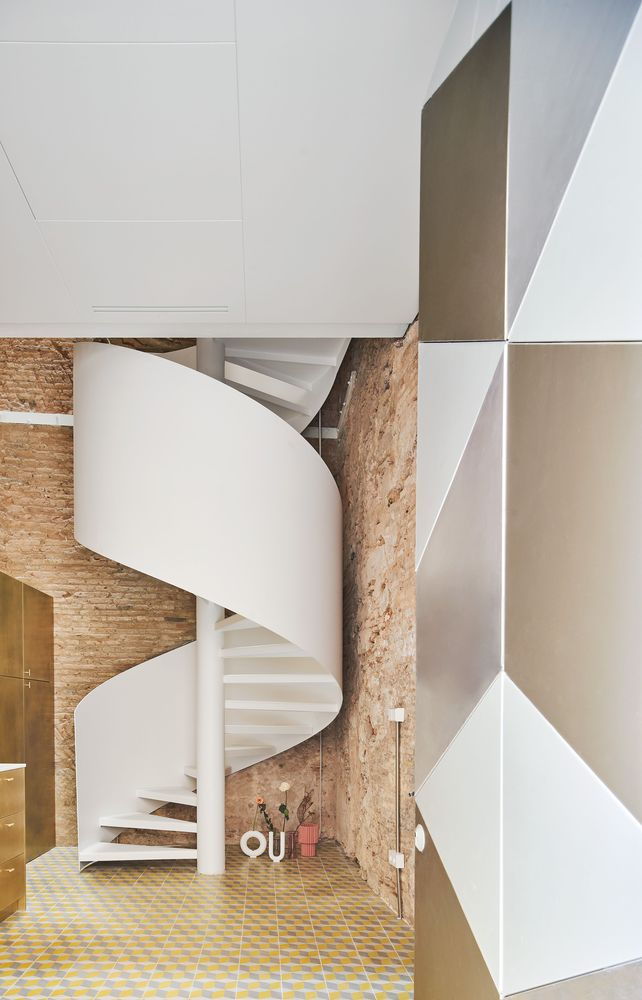 “The construction process, slow and complex, at least allowed decisions to be made as the essence of the estate was revealed with the demolitions,” they explain. “Thus, once all the floors slabs had been demolished and the building was seen as a slender and tall prism formed by walls with a completely heterogeneous composition of all kinds of bricks and stones arranged without apparent order or composition, the idea of leaving all these walls exposed became conceptual: these four walls, over 15 meters high, are a museum of the building’s history, where any trace of its construction (arches, lintels, stairs, and beams), and of its use (mortar remains, furnishings, claddings) will be left unaltered, exposed in all its crudeness.”

When putting in the floors for the three upper levels, the architects chose not to extend them all the way to the original brick walls. Instead, they placed sheets of glass in between, creating a four-story void looking all the way up to the roof. Not only does this help transmit daylight through the home, it continually draws attention to the sculptural beauty of the staircase as you ascend. 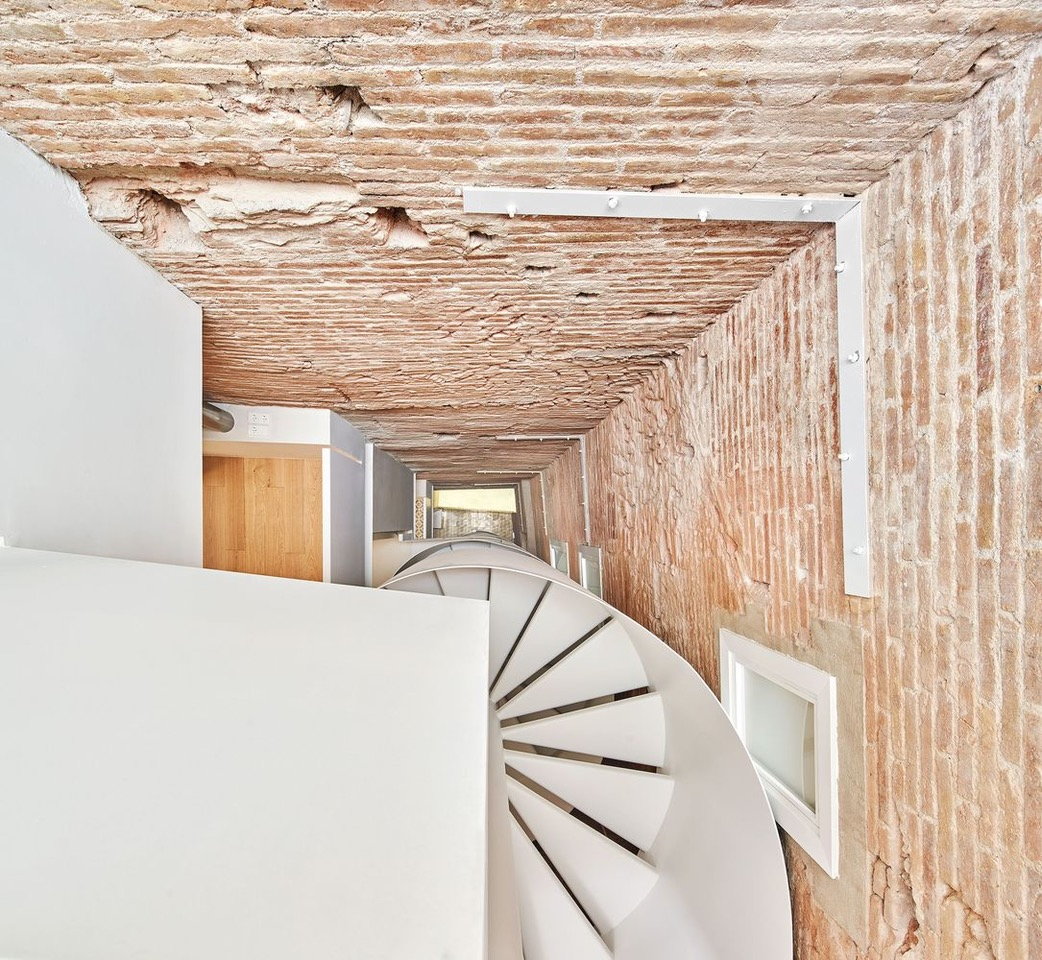 The juxtaposition of the smooth spiral staircase with the textural original brick is what makes the space sing. Left exposed and visible, the remnants of the building’s past hint at a complex history that seems even more remarkable when placed beside new elements like the gleaming brass kitchen suite. The kitchen was placed on the ground floor and a bathroom lined with lacquered wood on the second. 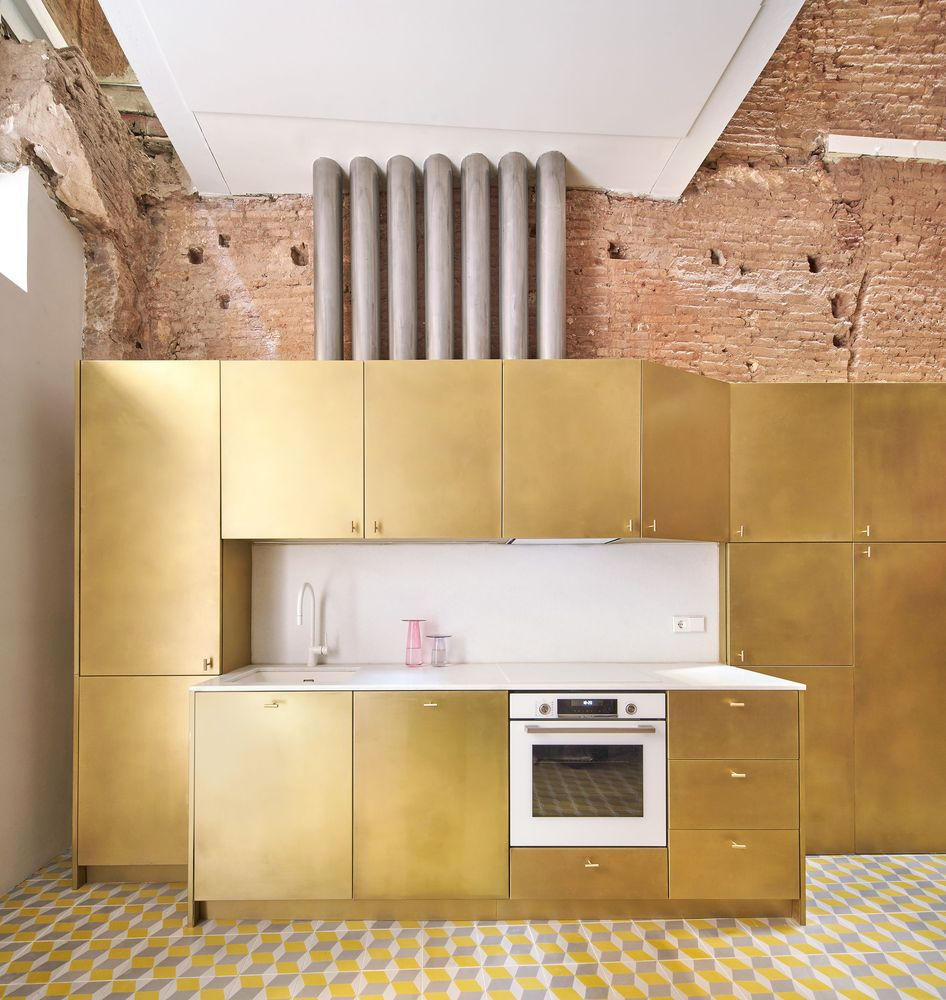 The architects add: “In terms of materiality, a certain refinement has been pursued in the new elements to be implemented, in opposition to the crude expressiveness of the existing walls, conscious that the space must house a home. Thus, the kitchen is a frosted brass piece of furniture, shiny and with reflections, with a white marble top; the bathroom equipment is paneled with lacquered wood in a slightly cream color, with black and brass details; the ‘headboards’ of the floors are covered in white microcement; the hydraulic mosaic, microcement, and oak floors add warmth and color to the interior; and the lacquered wood ceilings incorporate registers and grids to ‘design’ these needs.” 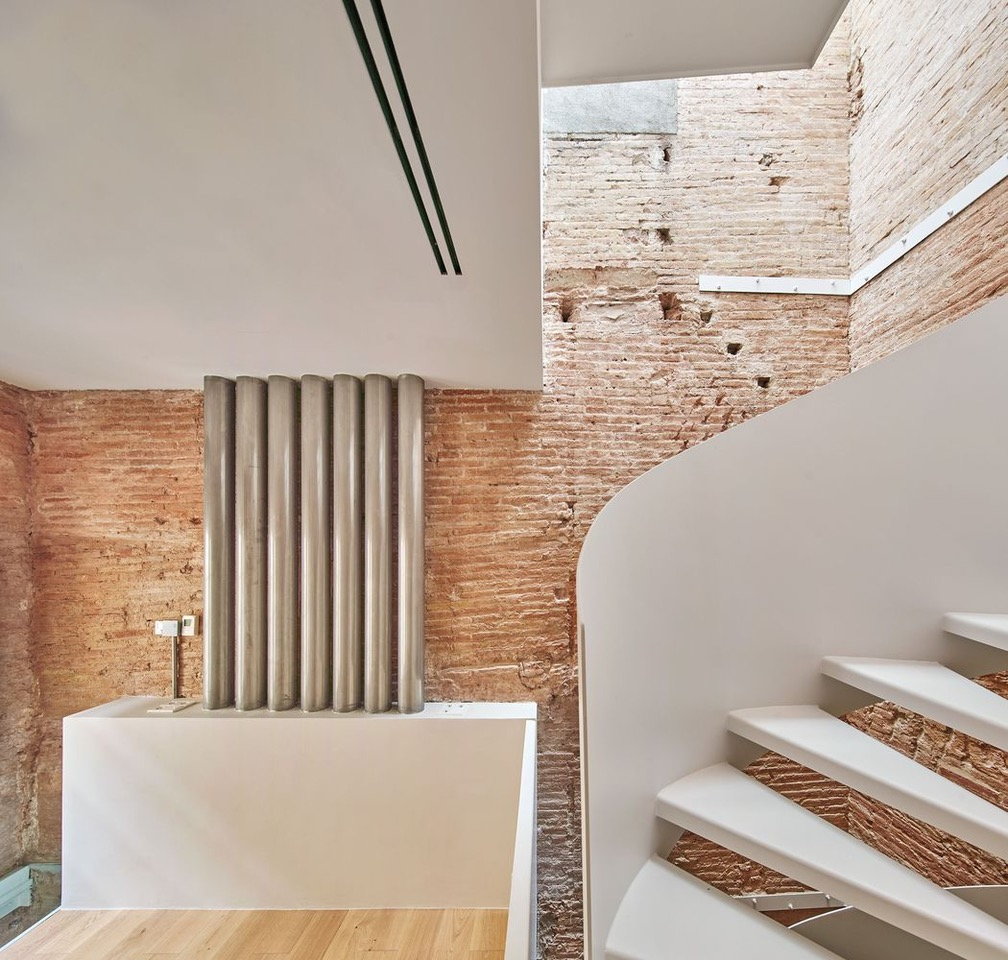 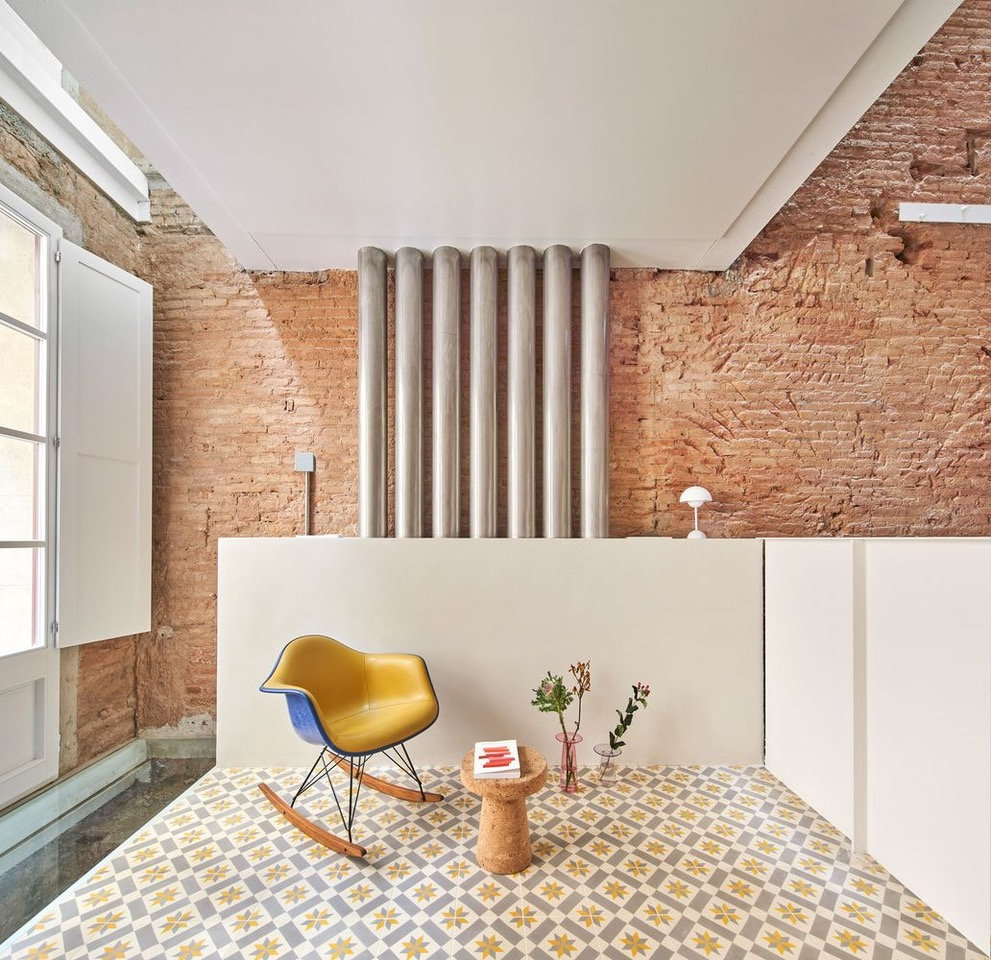 Service elements like the electric cables, air conditioning system, and telephone wires are routed within six steel tubes running vertically along one wall, themselves forming another interesting visual element. The other levels have been left mostly empty so the occupants can use them as bedrooms, offices, or anything else they like without restrictions. 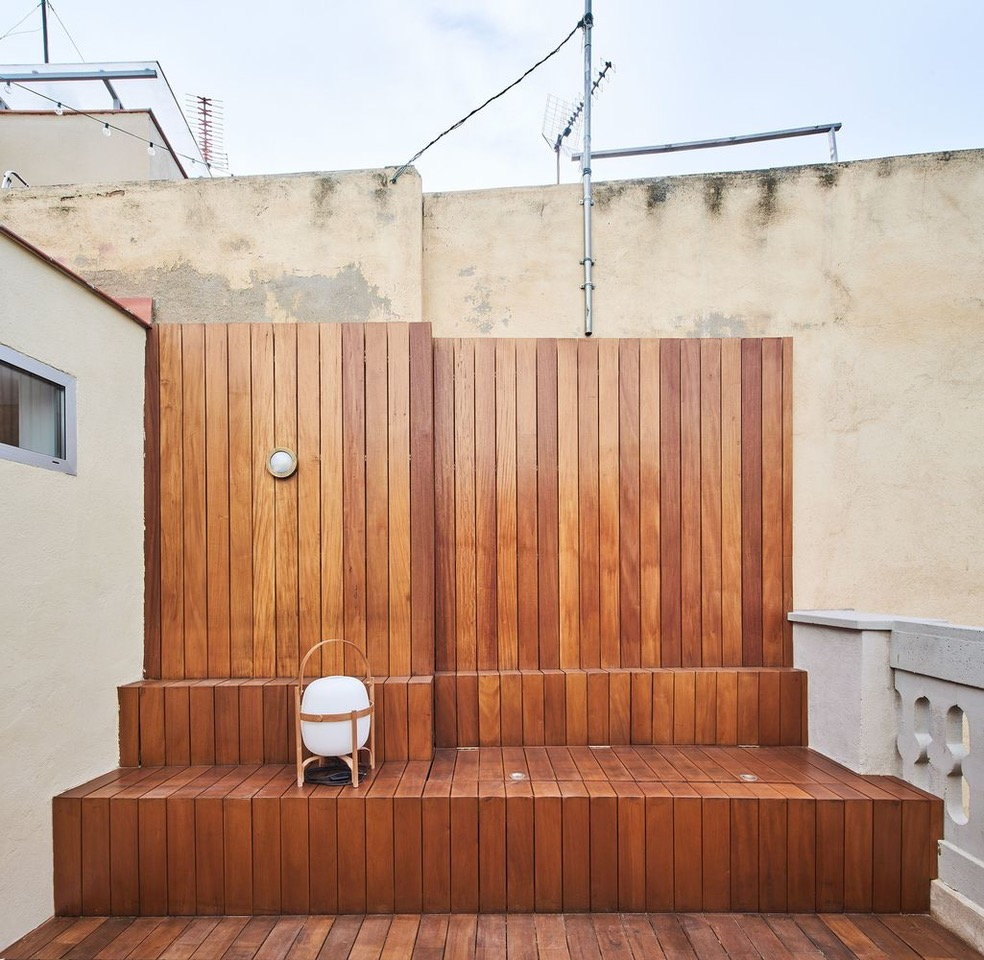 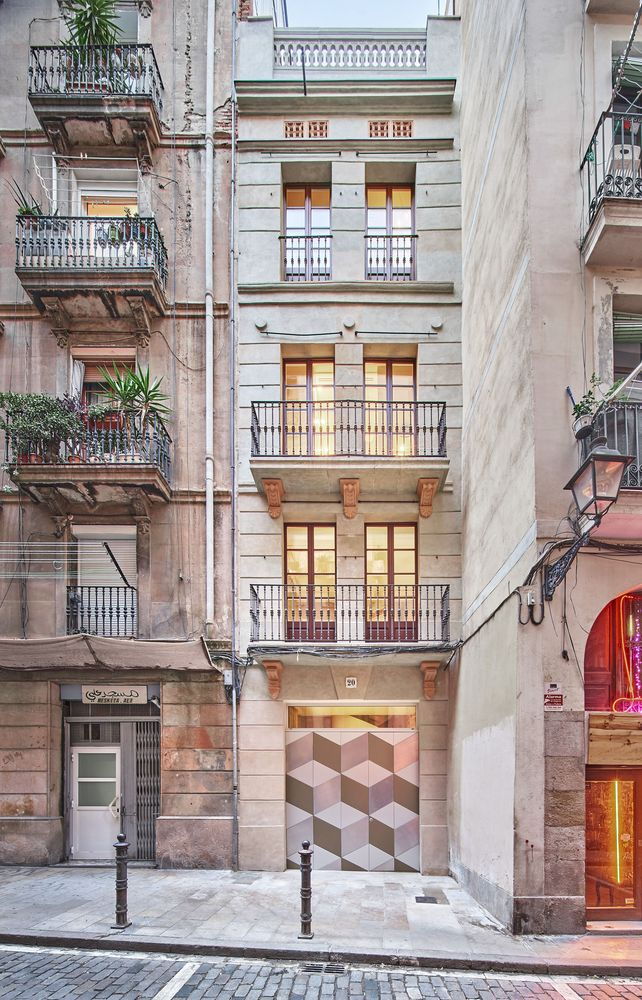 Outside, the tall and narrow home maintains its historic charm, complete with at every level, but the architects added what might be one of the coolest front doors you’ve ever seen. Made of three different kinds of aluminum, it features a graphic rhomboid-based design in a tribute to the traditional tile motifs found inside.