Control of Afghanistan has fallen to the extremist group known as the Taliban after 20 years of American military occupation. Many around the world and in Afghanistan fear the return of the fundamentalist strictures which were imposed under the group’s rule from 1996 to 2001—particularly the oppression of women and girls. The Afghan all-girl robotics team (known as the Afghan Dreamers) are among the many women who fear for what the return of the Taliban will mean. The young women are reportedly desperately seeking asylum in Canada in fear for their safety and their right to continue their education.

The group of 20 young women—aged 12 to 18—first made world news in 2017 for their skill with robots and international success in competitions. Founded by Roya Mahboob, an Afghan expat tech entrepreneur, the team is composed of brilliant young women who tried out for the chance to design robots and travel around the world using their creations. They spent many months in the United States and Canada in 2017 and 2018. During this time, they won awards for their creations and met political and entertainment figures—from Justin Trudeau to will.i.am.

Inspired by the lack of ventilators available to treat those hospitalized with COVID-19, the ingenious team yet again made news in 2020 for designing low-cost ventilators which could run for 10 hours on a battery. Their design cost over $19,000 less than crafting a traditional machine. Their achievement was praised by the Health Ministry spokesman Akmal Samsor of the now fallen government. According to , the young inventors viewed their achievement as a way to help their region as the country struggle with the pandemic.

In 2018, one of the girls on the team told that Taliban rule “would be unbelievable for me.” Another commented, “When you have Taliban outside, goggles aren’t your biggest security problem.” These girls were born in or after 2001, and have only known an Afghanistan where women have had more opportunities for schooling and careers. They are fully aware that the return of the Taliban could imperil all they came to represent as young Afghan women in STEM.

The team is urgently asking the Canadian government for asylum. The team lives in the city of Herat, an ancient provincial capital which militants on August 12, 2021. According to Kimberley Motley—a New York-based international human rights lawyer who is attempting to assist the Afghan Dreamers—the Taliban has already begun turning female students away from universities. “These girls are extremely terrified,” Motley told the . Reports have also emerged that the Taliban has turned female workers away from their jobs, sometimes telling them to send male relatives in their place.

In particular, the girls are appealing to Canadian PM Trudeau, who they reportedly took a liking to during their Canadian travels. Motley , “we are very, very concerned of that happening with this Afghan girls robotics team—these girls that want to be engineers, they want to be in the AI community and they dare to dream to succeed. And we are literally begging the Canadian government. We’re begging Prime Minister Trudeau, who has been an amazing supporter of the Afghan girls robotics team, to please allow them to come to Canada.”

This extreme concern for the well-being of these young girls is not unfounded. The Taliban has recently that they will continue to allow women to go to school and will modify their treatment of women. However, the international community is of these claims. Under their previous rule, the Taliban banned women and girls from receiving eductions and from working in most fields. The group is also known for its past use of sexual violence, forced marriage, and even executions. However, there is an entire new generation of young women in Afghanistan who have grown up with more rights.

While the Afghan all-girls robotics team awaits news on their pleas to Canada, they like many other Afghans believe themselves in imminent danger. Despite Taliban claims, the desperation of the crowds at the Kabul airport and the quiet, anonymous words to news outlets suggest many citizens are awaiting violence based on gender or association with the Western occupation. Speaking to CNN anonymously, a woman whose mother was recently shot by the Taliban (when she could not feed militants) said she is staying indoors mostly—a sentiment echoed by other women CNN spoke to. The Taliban requires women to wear a burqa and be accompanied by a male relative. “If I need something, how I am I supposed to get it? It’s a punishment. It’s not Islam. They call themselves Muslim. It’s not right for them to punish women,” she said.

What can you do to help women in Afghanistan? For starters, if you live in Canada, you can call or email your local representative asking them to help the Afghan Dreamers receive asylum in Canada. Wherever you live, you can call or email your representatives asking that they support emergency humanitarian visas for Afghans of all genders, particularly those in imminent danger for their prominent places in society or their brave advocacy of women’s rights. For more information on what you can do today to help Afghan refugees, check out this . For women refugees in particular, is helpful. Last, but certainly not least, we can all be mindful of the language we use to protect our Muslim neighbors, who may experience an increase in bigotry during such news cycles. The Taliban is not the religion of Islam, nor is it the country of Afghanistan.

The young women of the Afghan all-girls robotics team is trying to get to Canada for their safety and continued education.

The team rose to prominence with their award-winning performances in competitions around the world, but Afghanistan’s fall to the Taliban after 20 years of increased rights for women threatens many. 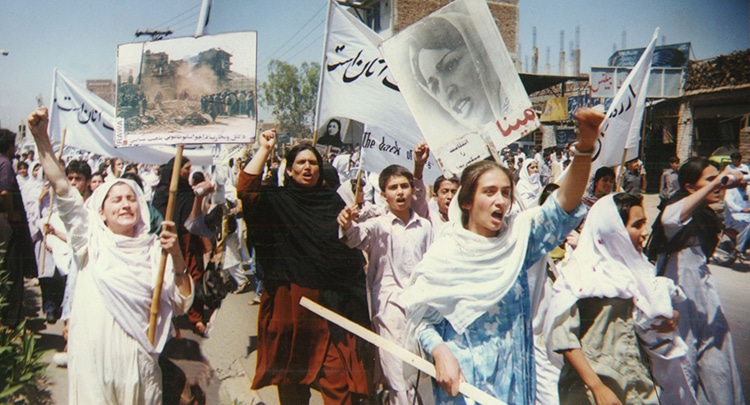 Protest by the Revolutionary Association of the Women of Afghanistan (RAWA) in Peshawar, Pakistan to condemn the 6th anniversary of the Taliban entering into Kabul (in 1992) on April 28,1998. Afghan women have. along history of resistance to the Taliban. (Photo: RAWA via , )