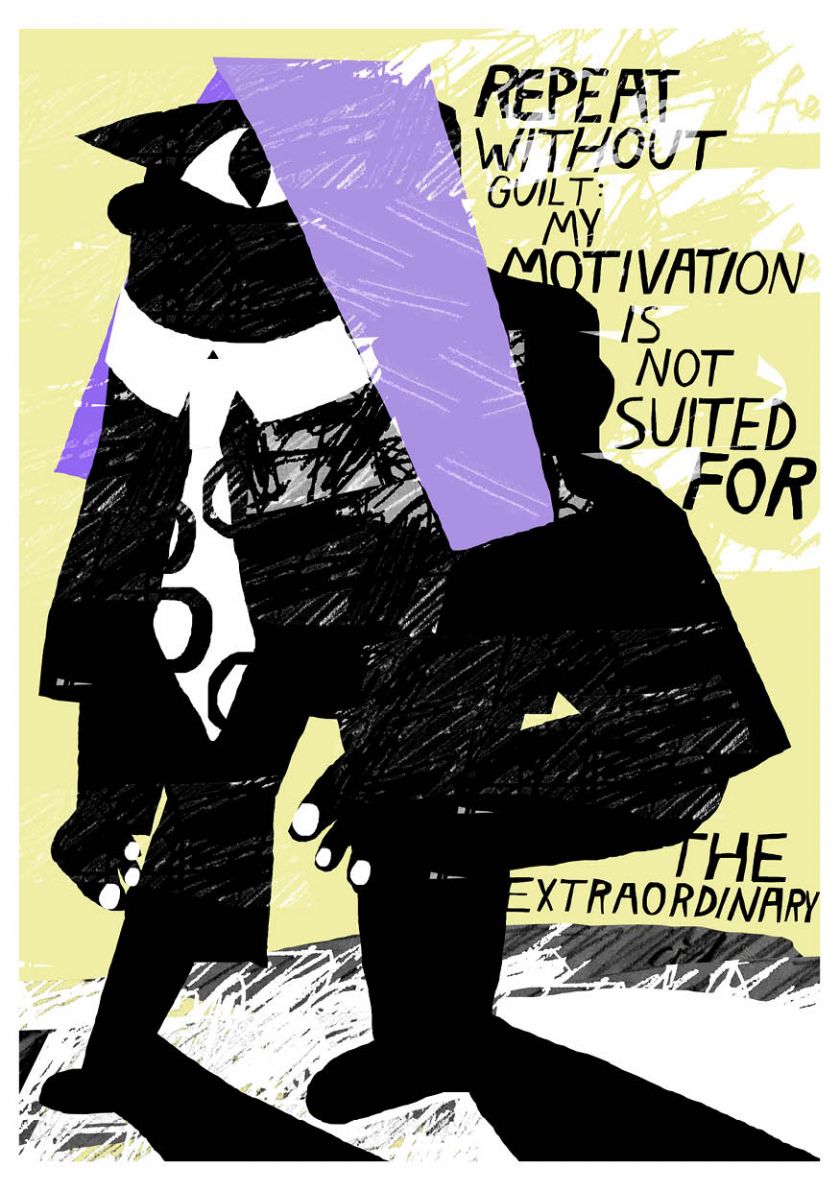 A keen storyteller, the Würzburg-based illustrator knows how to craft a good narrative. From spooky characters to hand-drawn lettering, each piece is crafted with a story, memory or moment in mind. We chat with the illustrator to find out more about his practice.

It’s always interesting to hear of a creative’s upbringing – learning about the inspirations, subject matter and thought-process behind the work they create. , for example, was raised in a small town named Kleinstadt, located in the centre of Germany. It’s also where the Brothers Grimm grew up, the folklorists and linguists known for the Grimm’s Fairy Tales. “The town, therefore, attracts a lot of tourists,” says Alex, “but ironically, it doesn’t create a bright cultural scene. It means you have to get creative on your own if you are not pleased with what was there.” As a result, Alex played in bands, wrote stories, “fled into the internet” and books and, in turn, built his own little subculture – a place in which he’d craft his own worlds that would later form his career.

After learning about this little nugget of his past, suddenly, everything starts to make a lot more sense. Alex is an illustrator who, after moving to Wiesbaden, later relocated to Frankfurt and Würzburg to study Communications Design and an MA in Illustration. Interested in the more urban environment – a stark contrast to his upbringing in Kleinstadt – this is where he realised a few subtleties about himself and his work. “Both cities aren’t really cosmopolitan but definitely more urban, and they’re interesting to live in,” he says. “Still, I think, the contrast between everything about myself and what I am not is the most inspiring thing to me.” 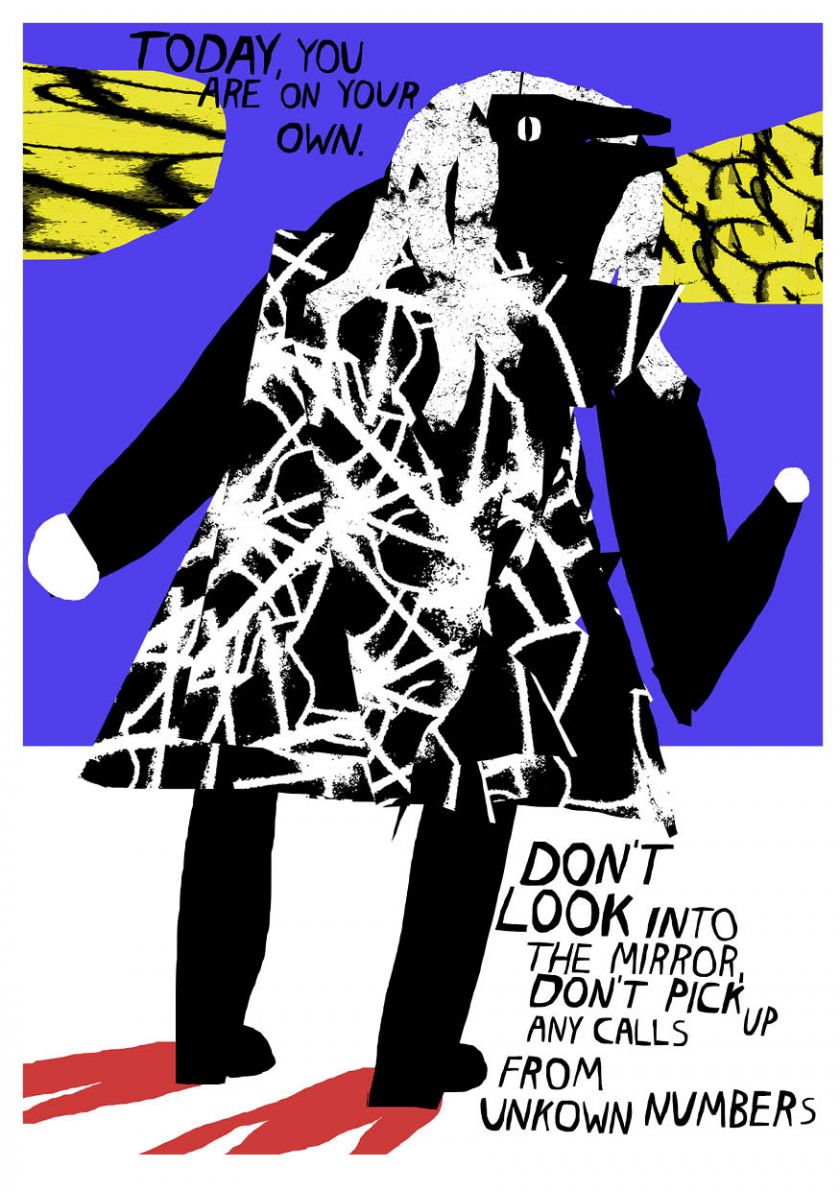 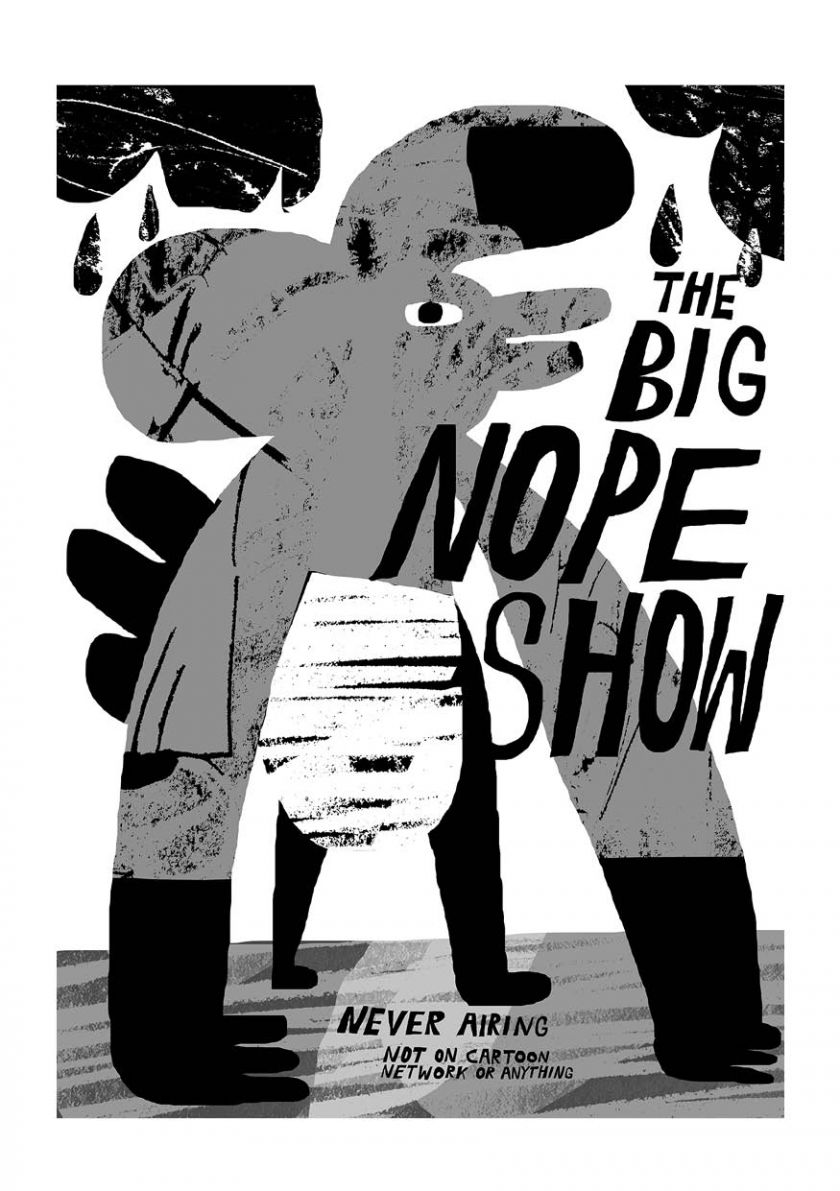 Alex’s work is charming, detailed and driven by narrative; he makes spooky, surrealist characters – the type that fit perfectly into a Brothers Grimm tale – and his lettering is hand-drawn and rough. You’d think that, upon observing his creations, he’s spent a lifetime refining his craft and aesthetic. But really, Alex doesn’t really know how or why he came into the medium.

“I was just always drawn to it, naturally,” he adds. “In my childhood, I could sit and stare for half an hour at one sticker, cartoon show or something for a sticker album. It really sucked me in magically, and in my mind, a cartoon of its own started while looking at every little detail (the story took place at a family dinner in a typical German restaurant – maybe Schnitzel and Bavarian wood panelling were just too boring).” No matter the uncertainties, Alex always loved to draw and make up his own stories. “And I guess that’s what I love about illustration – to determine my own story and look, directly from my brain to my hand.” 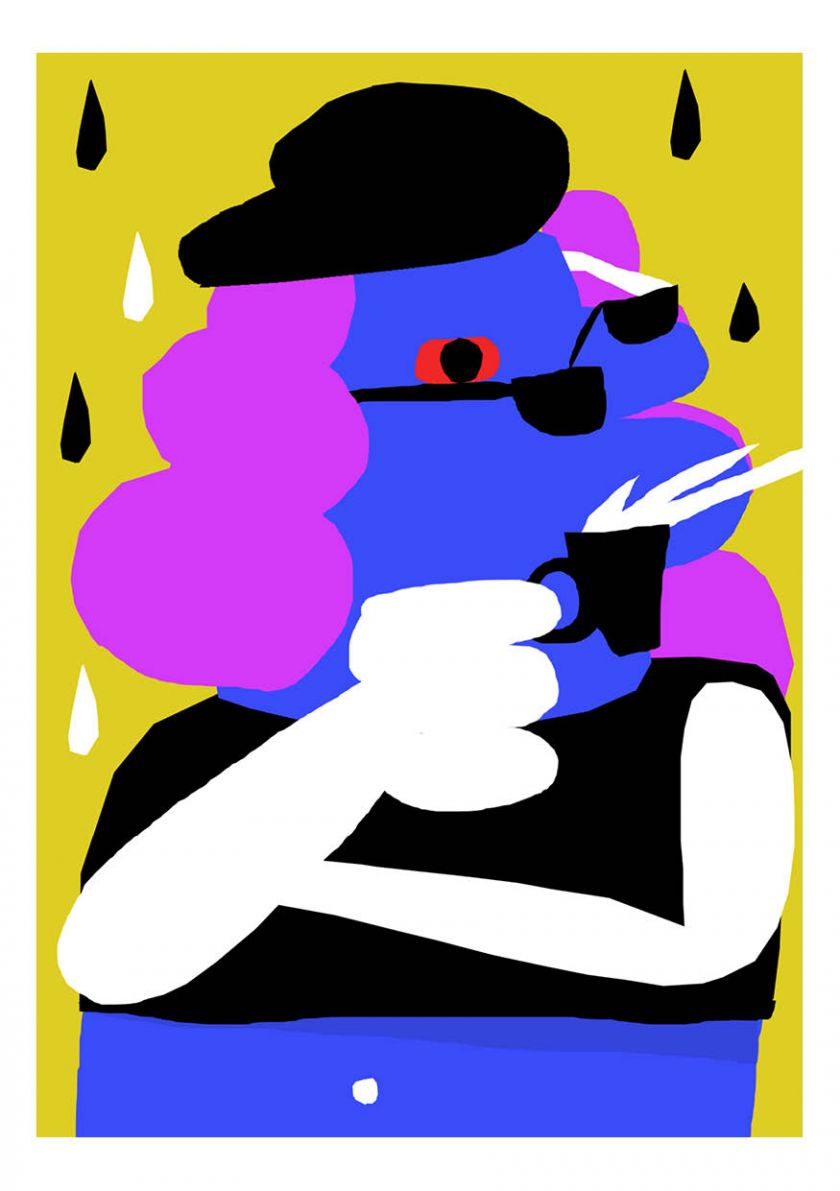 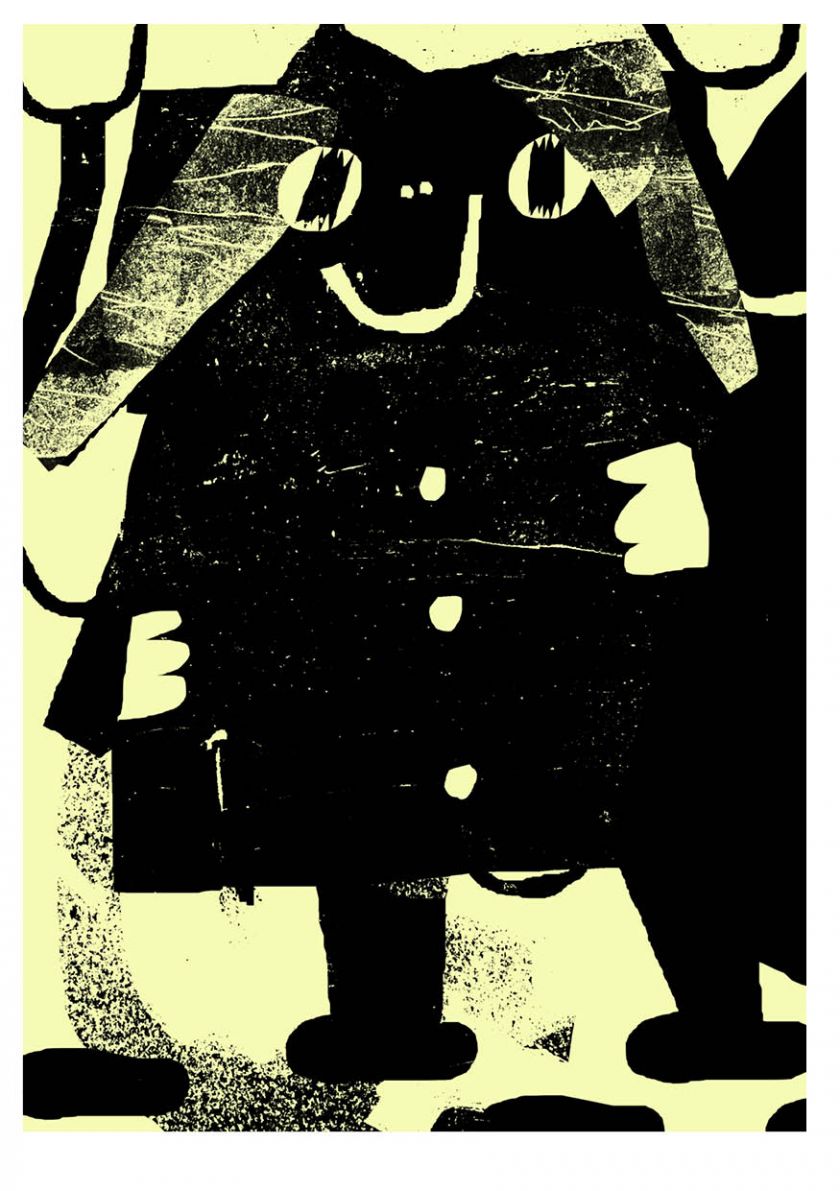 While determining the subject matter of his pictures, Alex will pull inspiration from everything around him. It can be anything from a conversation overheard between people, talks with his friends, from walks or looking at things that he doesn’t quite understand – something he finds particularly odd. He’ll then absorb these elements and distort them into his visual language. “Most of the time, I cannot connect the outcome and the source material,” he says. “It’s not that direct; it’s more cryptic.” The one thing he’s sure of, however, is that he’s fascinated by people who don’t fit in with the mainstream; the people that “have no choice but to be who they are and how they struggle with the surroundings they originate from or have to live in.”

Once these ideas are formed, he’ll work intuitively and spontaneously to form the illustration – a process he finds hard to describe. “Kind of my language, like in music,” he says. Whether it’s a graphic, colourful block print or one that emphasises a character, Alex’s work is full of story and illustrative flavour – so much so that it’s not inherently obvious as to what’s going on in his pictures. And that’s just the way he likes it. “I try not to be too specific or overly clear in the messaging,” he says. “I like to build a world which resonates and has its own contradictions.”

In future, Alex plans to continue working on comics as well as his own larger personal story. “I’ve been drawing and drawing, sheets over sheets of thin copy paper with the same pencil for five months, listing and sorting them into boxes.” Soon they will see the daylight and present themselves out into the world – and this is definitely something to keep an eye out for. 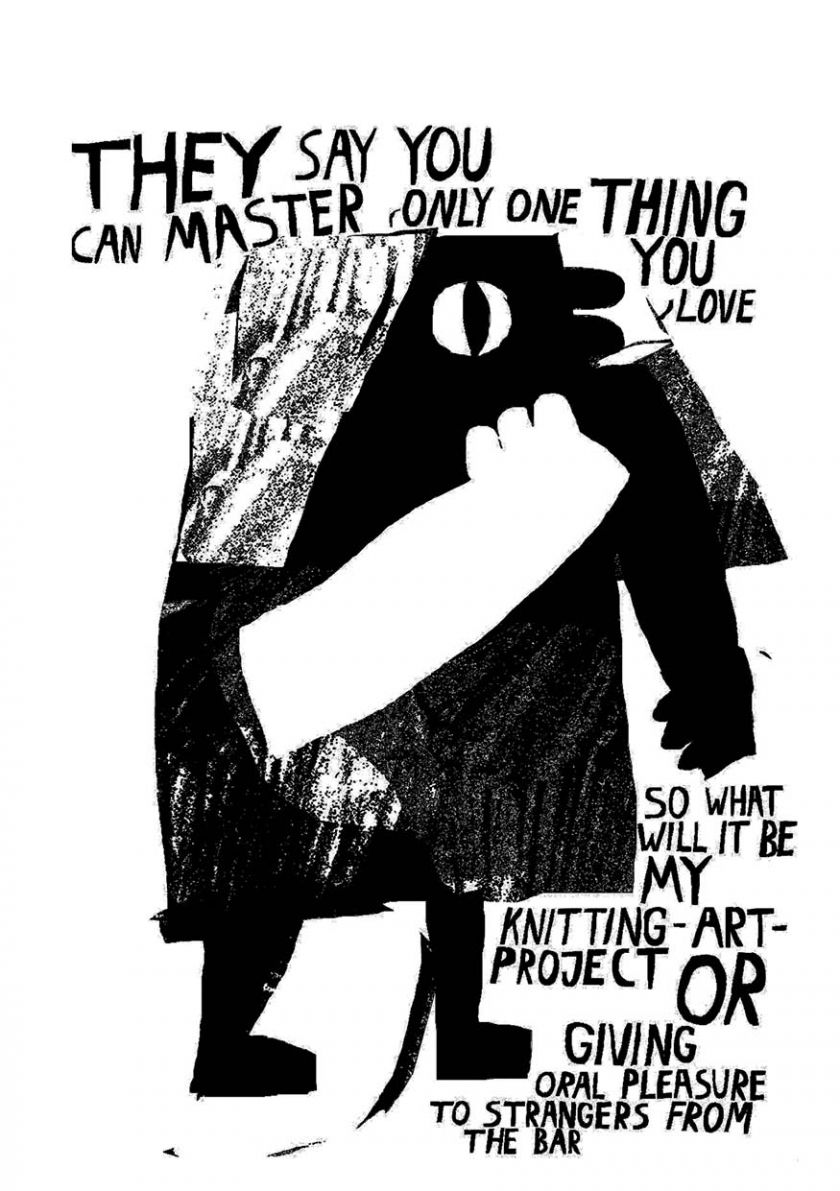