Artist Claire Luxton on forgoing FOMO, being transparent, and finding your true passion 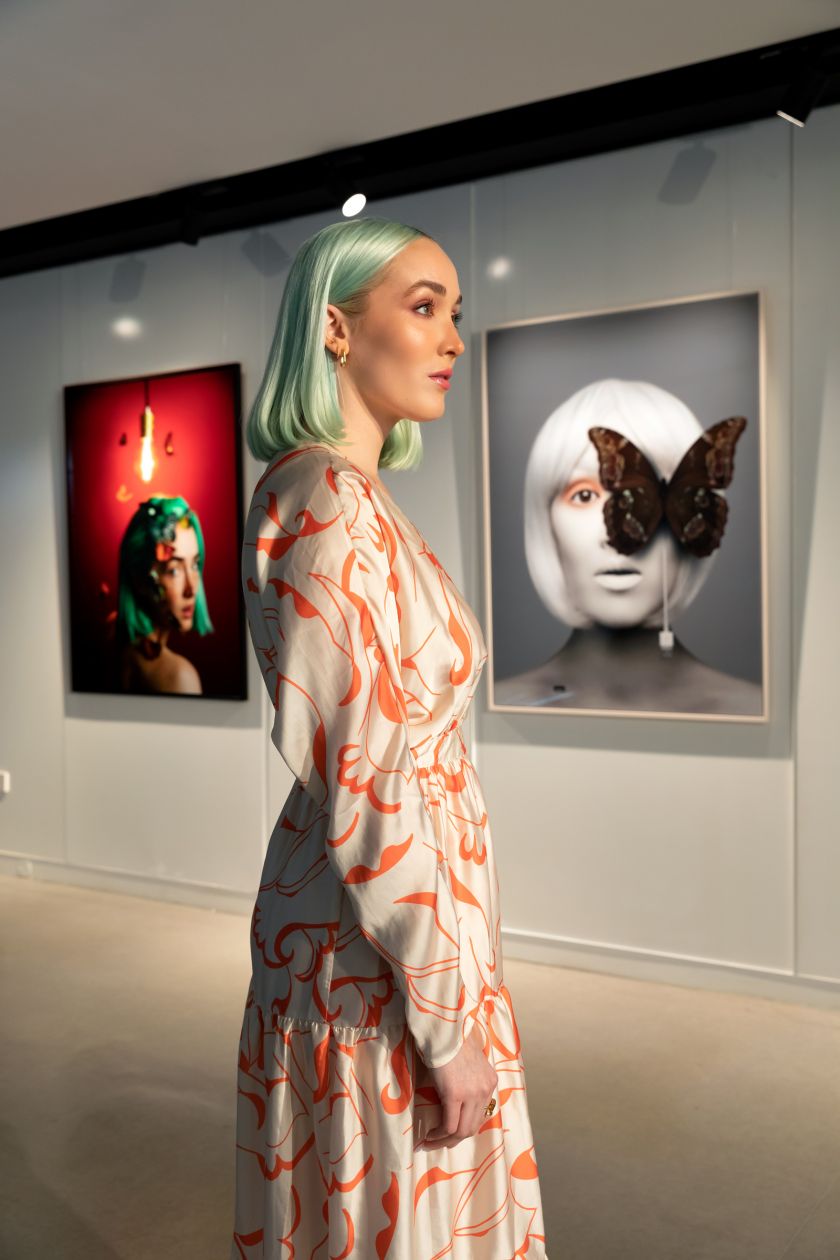 In the seven years since she graduated from Goldsmiths University, artist has carved a name for herself as a true British talent. Working mainly in photography, video and installations, her work explores the delicate equilibrium between humans and nature, evolving themes of isolation, desire and uncertainty.

Her first solo exhibition Avalon, in 2015, was followed by a second, Botanica, in 2017. Her work is part of the in the US and has been shown in London, Miami and Singapore.

We caught up with Claire to discuss how her career has evolved, how she coped during the pandemic, and what she’s learned about herself along the way.

How has your practice developed over the last seven years, since you were at Goldsmiths?

It’s developed quite a lot. And I feel like it’s coming around full circle.

When I was at Goldsmiths, my practice was primarily painting and sculpture. When I was younger, my dad taught me how to weld, and I’ve always loved physicality and materiality – that real, tangible presence an artwork can have.

At the time, the photography element of my practice was very much like a sketchbook, a way of coming up with ideas. I’d take snapshots of things I found interesting, or textures, or colourways.

Then towards the end of Goldsmiths, the photography side of my practice took off. But recently, I’ve had a yearning to get back to making physical stuff again.

The projects I’ve been working on over the past 12-18 months have really shaped my passion for bringing my materials back into photography. I don’t necessarily want to scrap photography altogether but have the two working in parallel or combining them somehow. 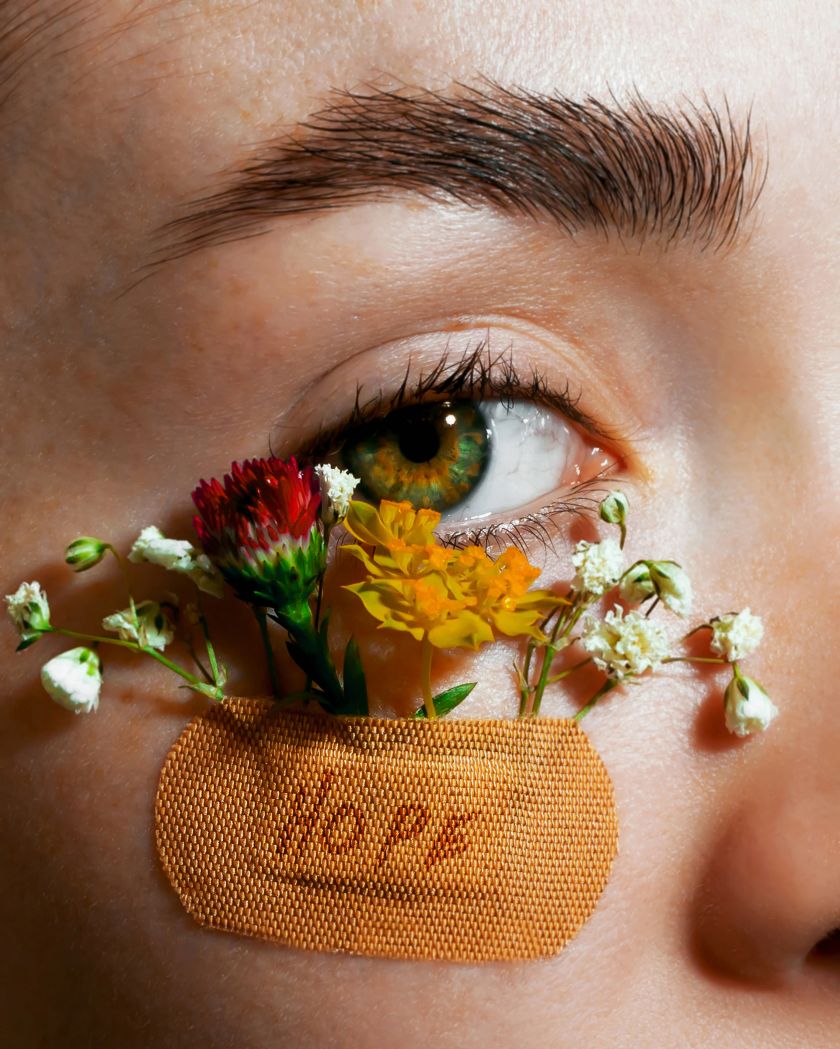 Is that maybe because during the pandemic, we had to rely on digital so much… and we’re now craving the physical again?

That’s definitely an element. It’s also been a lack of space and a lack of time. But then, over the pandemic, I was lucky enough to be able to work on several public art projects. So that’s got the juices whirring again, as to wanting there to be a physical presence.

For instance, in October, I will have my artwork projected onto Marble Arch as part of Inside Out London [a project that temporarily turns the city into a giant outdoor art gallery]. That’s a video piece, so it’s not so static as photography, and obviously, it’s interacting with an object. So to me, it’s quite sculptural.

Is it fair to say that it was last year when things really started to take off for you?

Yes, several things happened last year. One of them was permitting myself to push all the things I’d wanted to do. There was no FOMO, as no one was doing anything! So my focus went more on my priorities.

I also started working MTArt Agency, which was such a breath of fresh air for me. I’d previously worked with galleries and then taken a timeout. Getting representation meant my practice was able to continue in the way that I’d become accustomed to, but that I had some additional support and opportunities that require a team.

There is a real calling at the moment to be very conscious of what you are saying. But I don’t think there’s only one way to read a certain artwork, and I wouldn’t ever want there to just be one interpretation.

How important has social media been to you?

Everyone should be aware of how much now, as an artist, your brand is important to how people perceive your work. Personally, I always want there to be a cohesive nature across my platforms.

It’s also important that if someone meets me in real life, they get what they’d expect to see from my social media. Sometimes I’ve met people I follow on social media, and they’re nothing like what I’d perceive them. So I always try to be transparent, showing as much of what I’m doing as possible – but in a curated way.

That’s not always easy, though. Your piece ‘Baptism of Fire’ got removed by Instagram, didn’t it? It’s characteristic of the censorious culture that’s affecting all creatives right now. Does that weigh on you?

I don’t want to edit myself. I want to be purposeful in what I make. There’s always clarity in the messaging I’m putting out there.

There is a real calling at the moment to be very conscious of what you are saying. But I don’t think there’s only one way to read a certain artwork, and I wouldn’t ever want there to just be one interpretation. For me, that artwork was very much a positive message. So for it to be suggested that it was inciting self-harm or violence just blew my mind.

It’s quite frustrating because there’s a lot of social media content that I think is super detrimental to people’s mental health. And that’s up there. So it’s a strange and difficult time to navigate at the moment. 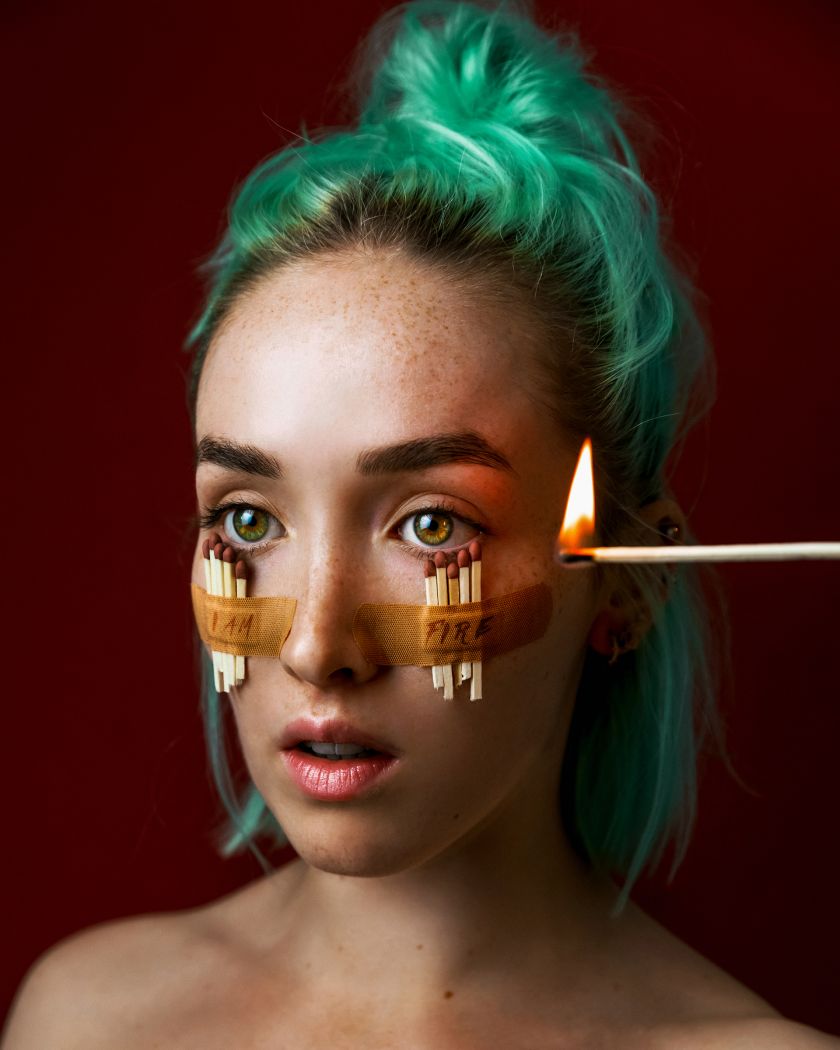 You shared a lovely piece recently called Faded Apologies. What was the inspiration for that?

I had no siblings, so I feel like I was quite naive for a long time, compared to people who have brothers and sisters to help them navigate things. And I think people took advantage of that when I was younger: took advantage of my kindness.

I’m turning 30 this year, and I’ve become a lot more ruthless with my relationships. I’m much more action-based. I want to surround myself with positive energy: people who can get on board with both my career and everyday life.

So this piece was reminiscent to me of these meaningless words and meaningless apologies that people say over and over again. I’m still learning that lesson. 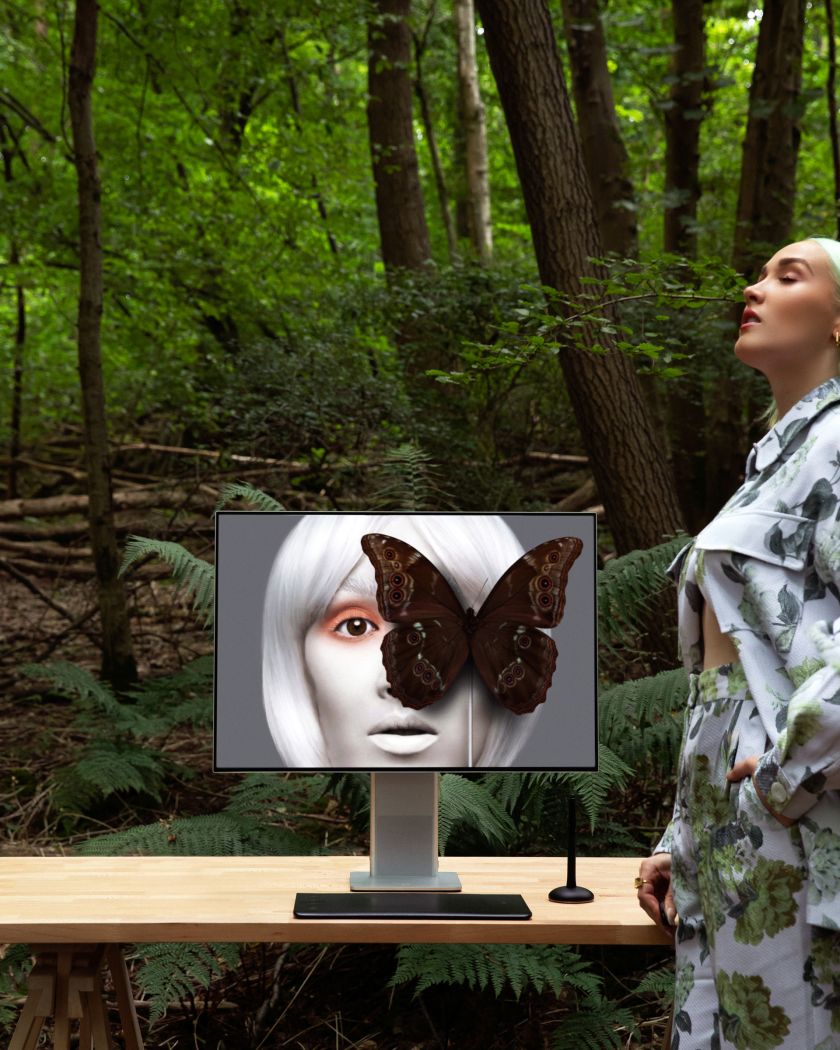 You’ve just upgraded your setup and started using a HUAWEI MateView monitor. How have you found it so far?

To me, when I’m working on an image, the photo is like the underpainting. It’s the skeleton for me. So obviously, I want the foundation to be really strong. And I try to capture as much on camera as possible. I want it to be super, super detailed.

I’ve always worked on a laptop, and all of my editing is done in Photoshop. Last year I tried a Wacom tablet, but it meant I was very much hunched over my desk. So now I’m using a HUAWEI MateView, which is a massive monitor at 28.2 inches. And that means I’m able to fully sit back and observe my work properly. So essentially, it’s like having a giant HD canvas that I can work on.

The colours are true to life: they’re very accurate in terms of how the work appears on the screen. In fact, I’ve gone back and opened up old files on the MateView, so I can properly see what I was looking at before.

A lot of my artwork is 150 x120cm. So when I’m looking at it on a screen, I want to see it as big as possible. And I need to see that the decal is accurate and that the colour is accurate before it’s sent to print. So the MateView is like my second pair of eyes.

Using it has also been great for my posture. I literally have to get acupuncture because of the weird way that I sit and edit. So maybe my acupuncture days are now over! 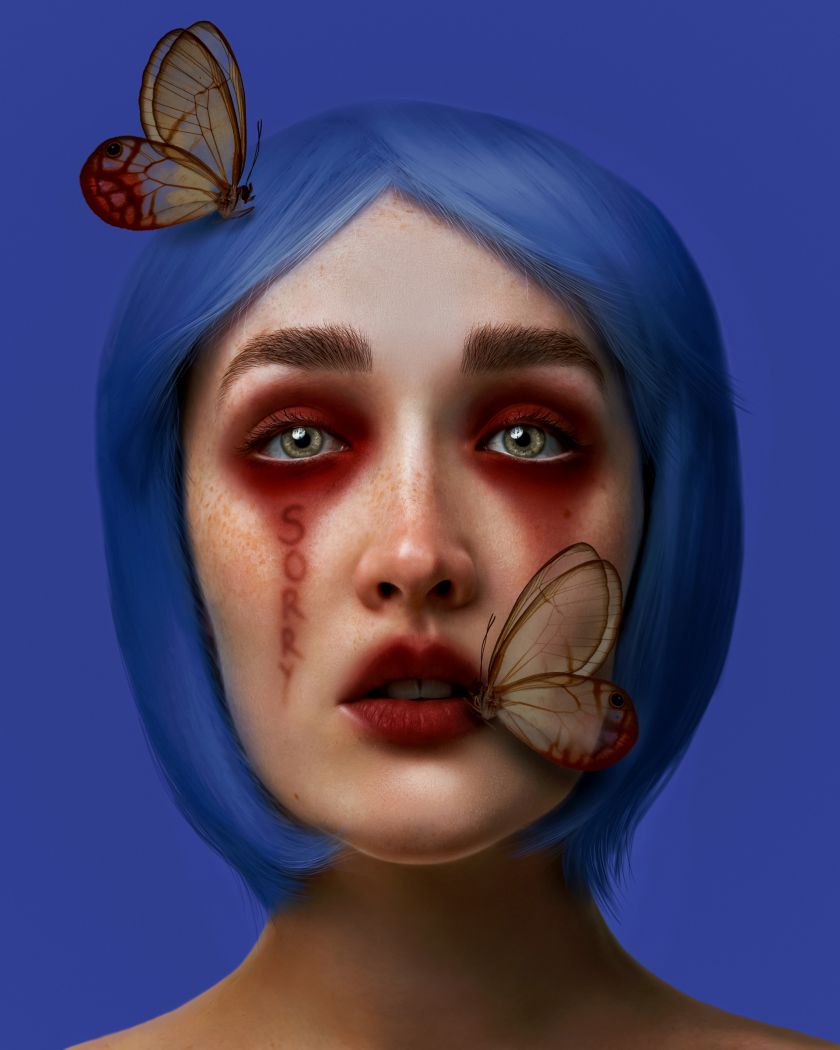 What’s currently on your mind and inspiring your work now?

Now that I have my new studio set up, I’m definitely going to start experimenting with new materials. I also want to incorporate sustainability more into my practice.

I’m hoping to be working with McQueens Flowers towards the end of the year and maybe work on a new collection that involves botanicals, which will give me a chance to convey both beauty and elements of sustainability.

What have you learned most about yourself in recent times?

I’m not very good at patting myself on the back. But I’ve learned that I am good at what I do, which is quite hard for me to say to myself. I’ve also learned that I’m very patient but also very goal-oriented and very competitive with myself.

The HUAWEI MateView is available to pre-order from the now and is on sale, RRP £599.99. Customers purchasing from a Huawei Store and selected retailers before 30 September 2021 also qualify for £200 cashback.