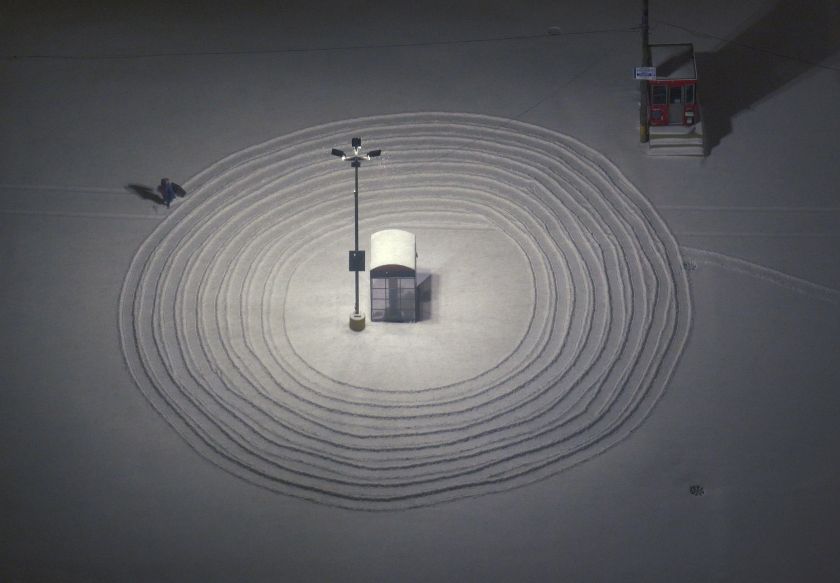 Since 2020, US-based artist has been cut off from her Chinese homeland due to the global pandemic. To bridge the distance, she has created a series of beautiful and meditative moon drawings that reference Chinese folklore and a legend of the Han dynasty.

Many of us found the pandemic restrictions challenging. But for Chinese artist Yuge Zhou, the travel limitations prevented her from connecting with her family and completing a two-part video series called, Where The East of The Day Meets The West of The Night. This series intended to film the sun and the moon as they set and rose from opposite sites of the Pacific Ocean, but due to Covid-19, it has been put on hold indefinitely.

While she waits to travel from California to Beijing once again, Yuge has expanded this video series into a new project that draws on her longing to return home. Titled Moon Drawings, these concentric circles etched into the nighttime snow by Yuge dragging a suitcase communicate her yearning to travel to her homeland. 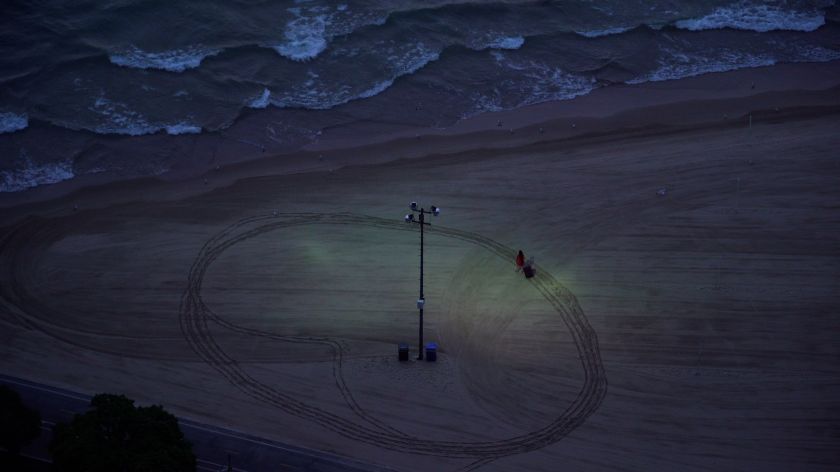 “In traditional Chinese culture, the moon is a carrier of human emotions,” Yuge tells Creative Boom. “The full moon symbolises family reunion. It was the first visible object of worship to the most ancient ancestors of the Chinese. I remember my mother telling me many bedtime stories and folktales about the moon when I was a little girl.

“One of them is about the Han dynasty emperor Wu Di. Yearning for his lost love, Wu Di had a terrace built in his palace park, which he named Fu Yue Tai (俯月台), which means ‘for viewing the moon from above.’ To be viewed ‘from above’, the moon had to be reflected in water, so the emperor added a lake at the foot of the terrace.

“I often think about this ancient story when the moon rises above my bedroom window. Even though it happened thousands of years ago, the experiences of longing are universal across time-space and history, regardless if you are a mighty emperor of a kingdom or a homesick immigrant in a foreign land.” 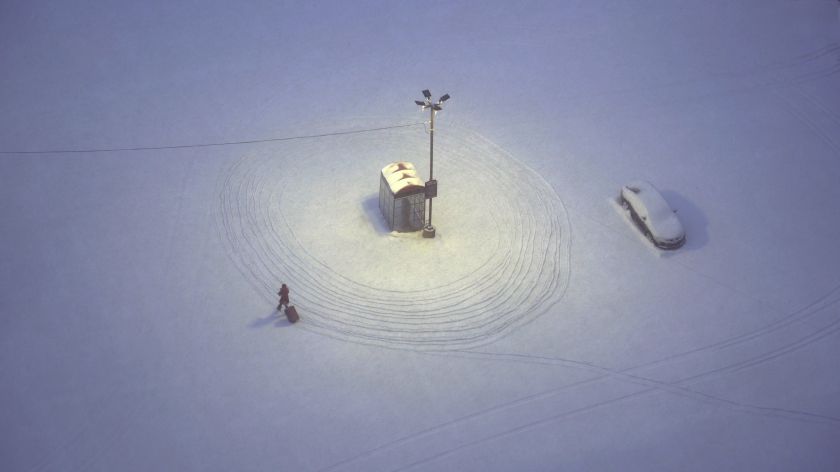 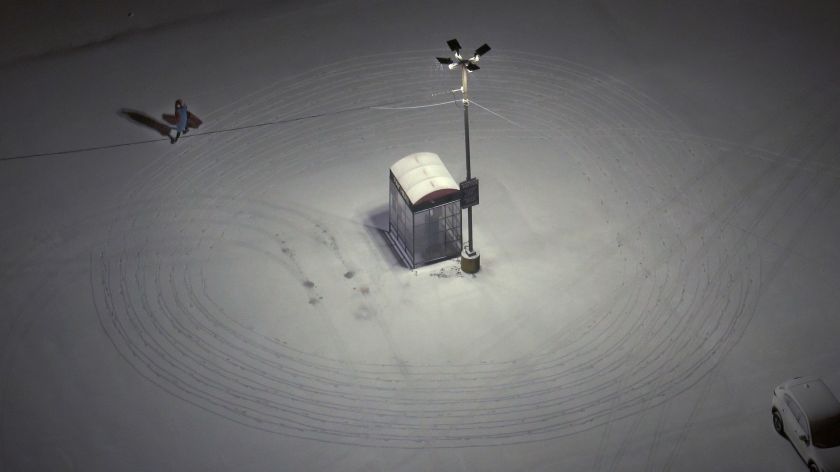 From her home in a high-rise apartment building in Chicago, Yuge can see the moon rise from her east-facing bedroom every night. It gives her the perfect vantage point to film herself as she creates her moon drawings alone in the snow-covered parking lot adjacent to her building. Describing them as a ritual, she has also adapted this drawing style into summer counterparts on a sandy beach by Lake Michigan. “As long as I’m unable to go back to China, I will continue to film this same ritual in the summer and winter,” she reveals.

Speaking of her experience making the drawings, Yuge says: “At first, as I was walking with the suitcase, I imagined that not only my own camera but a lot of other people were secretly watching me behind the windows of their apartments as if the windows were the eyes of the building. The bright spotlight from the parking lot lamp definitely added a sense of theatricality and made the scene stage-like.

“This made me very self-conscious, and I even slipped on the snow. But as time passed, I was finally able to not be distracted by the outside world, regardless of the sound of the city, the imaginary’ eyes behind the windows,’ or the coldness and darkness of the night. Doing these drawings now is like an act of meditative inscription for me. “ 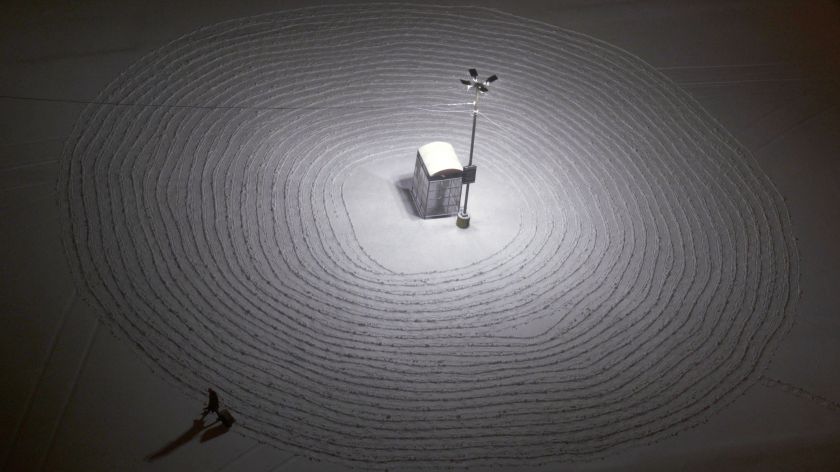 Seeing as most of the drawings are made before dawn, not many people are awake or around to interrupt Yuge as she works. “Occasionally, cars were driving by the adjacent streets,” she adds. “I remember seeing people watching me from their cars, sometimes for quite a while, but no one has ever walked up and talked to me.” All that might change, though now that this series has been shared with the world, and Yuge hopes to one day exhibit the entire project in a gallery.

And given that Yuge has been creating these drawings every winter and summer for the past two years, she has noticed that the world around this ritual has changed so much, both politically and socially. “But the scenes have stayed the same, except that the tracks of my suitcase are erased by snow and waves the next day, and I am still patiently waiting for the border between China and America to open up so I can visit home.” 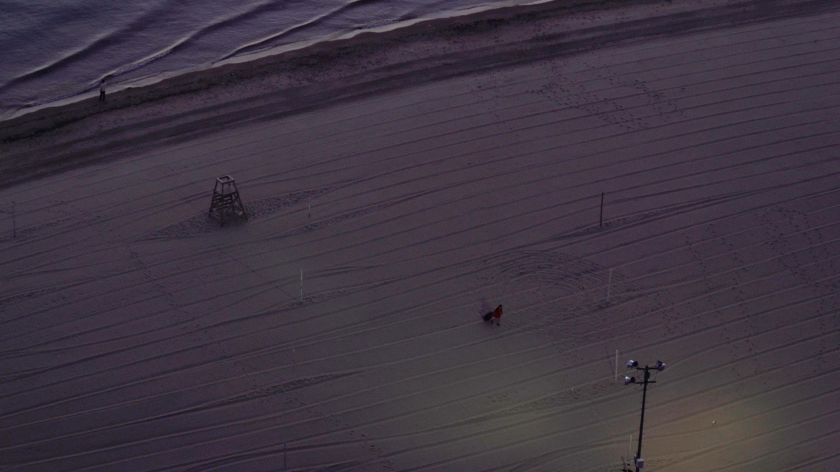