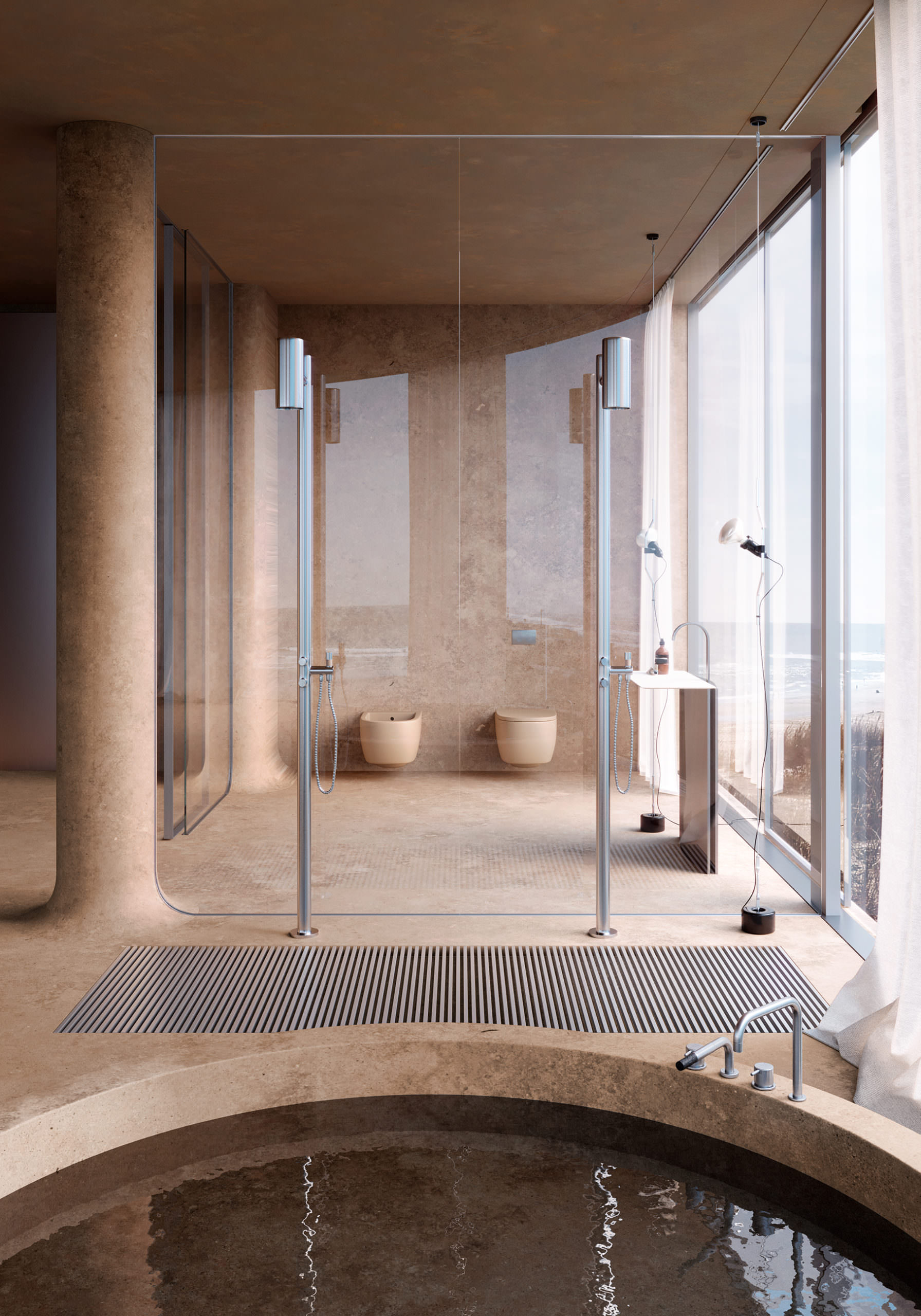 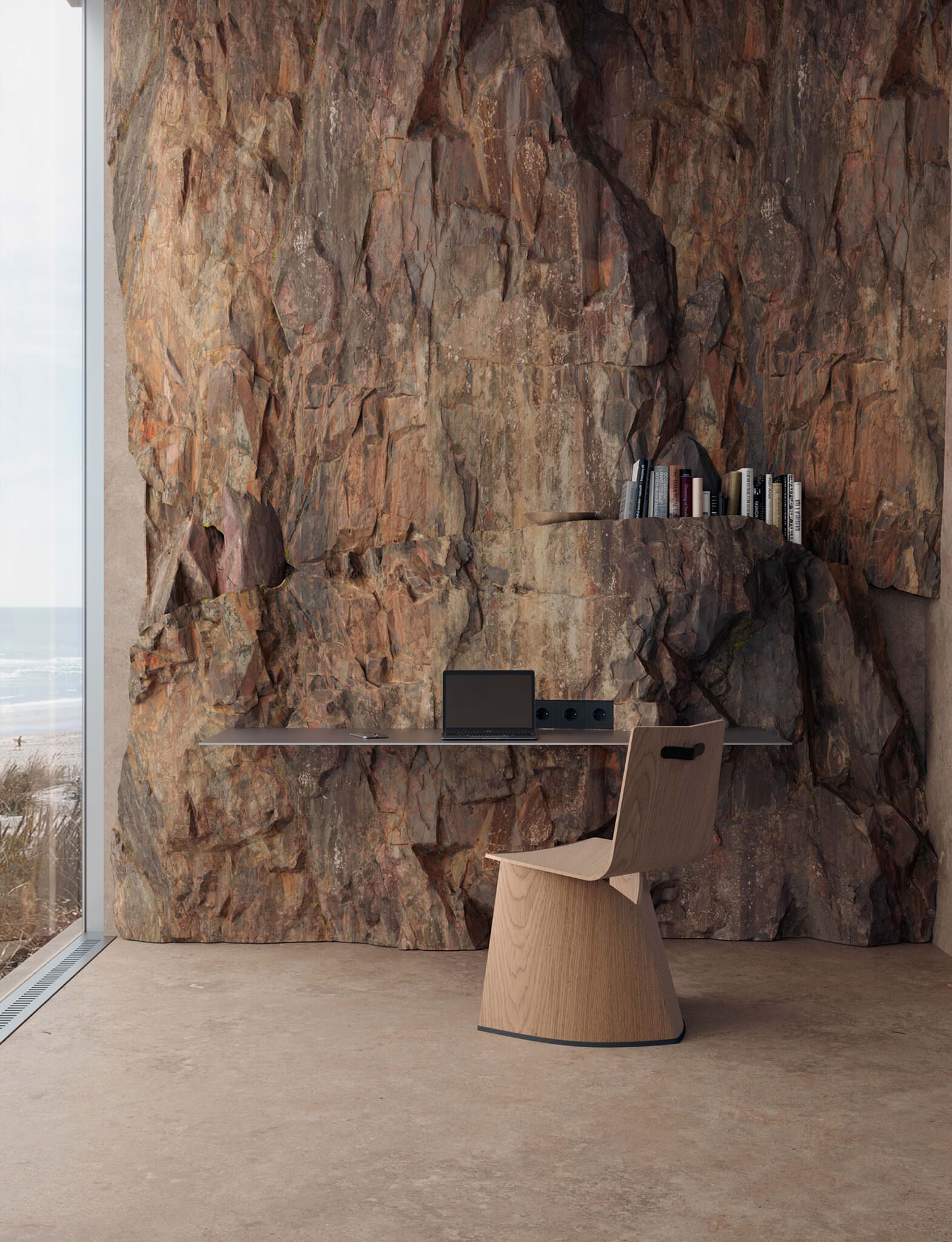 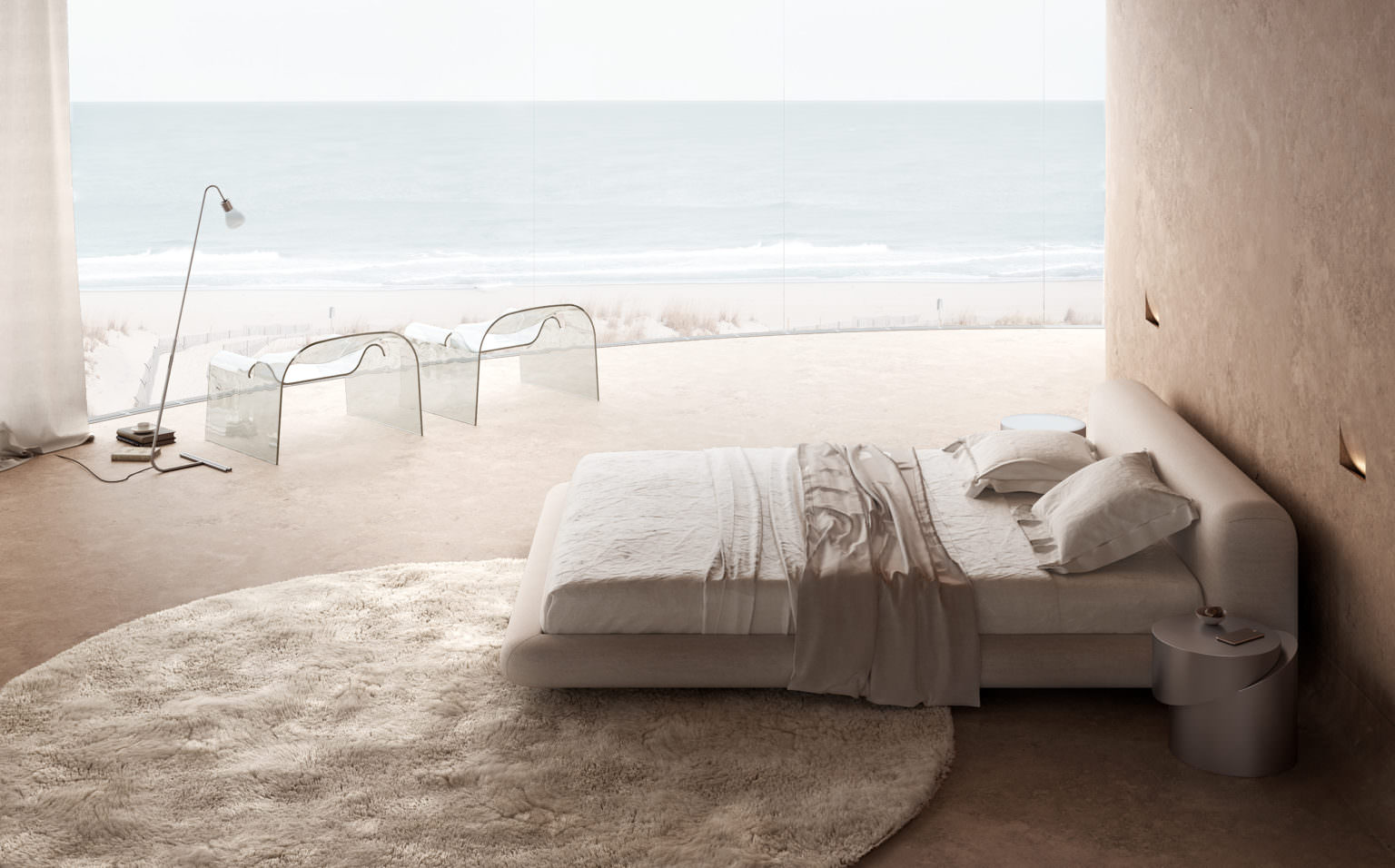 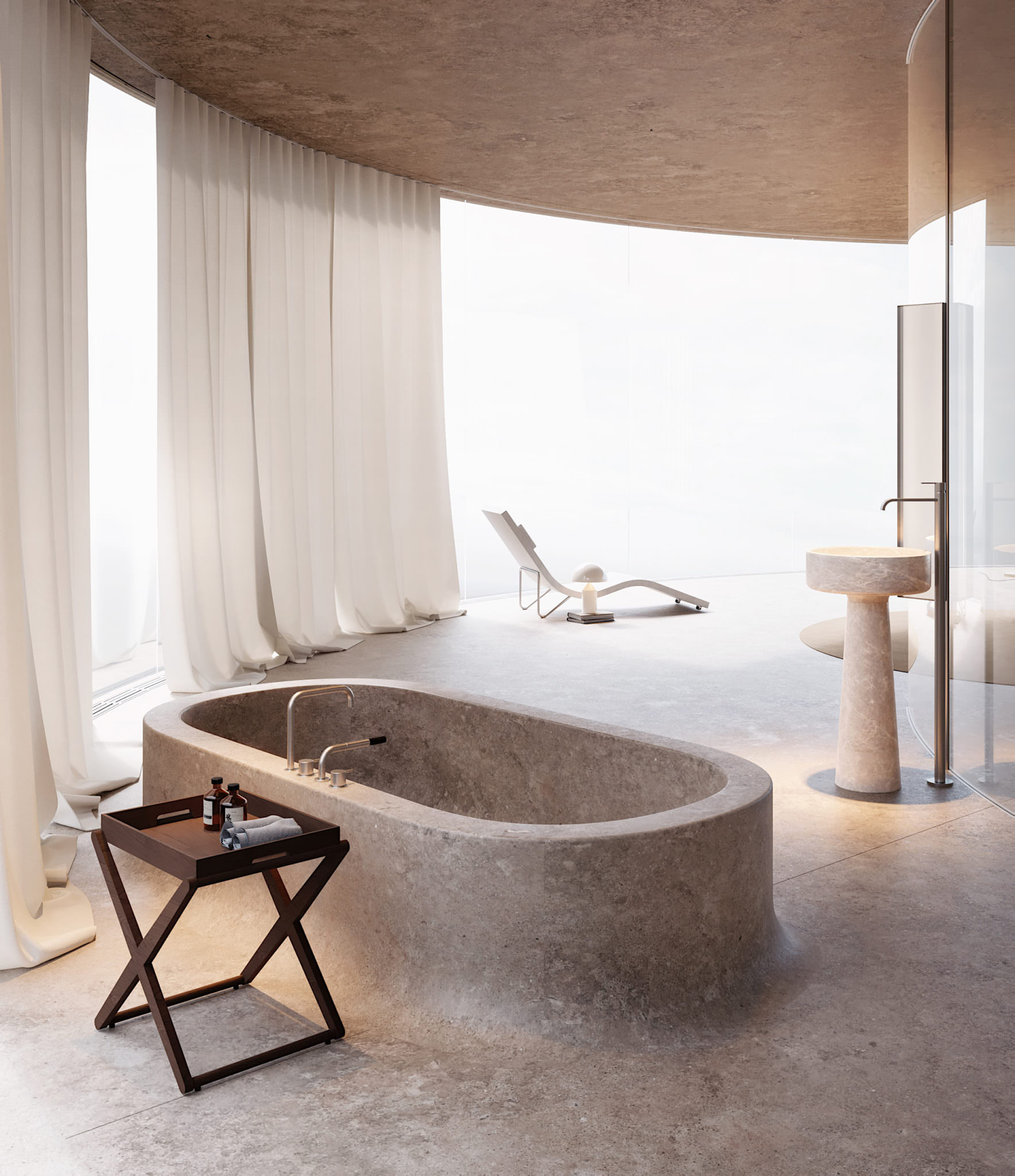 of has unveiled his concept for a Beach in that looks as though it belongs on a James Bond film set. Spaces unfold seamlessly as each program bleeds into the next without strict spatial distinction. Soft curving shapes and a highly considered textural palette remind us of the power and beauty of nature while creating luxurious interior spaces. To say we would like to stay here is an understatement!

Gulesha explains that this room is a small part of a much larger beachside hotel project. His intention for the design is to be “luxurious, liberated and to show a contrast between the brutal cave looking walls and the many cosy corners within it”.

The soft curves of the space are momentarily interrupted by a jagged rock face that replaces a polished plastered wall behind the small study. Gulesha outlines, “the idea of the materials is that in this digital era when work means sitting on the PC and answering emails for 2-3 hours I want to see and feel something natural…to sometimes touch a brutal rock plate and feel how powerful nature is”. A hidden bookshelf within the rock face allows books to seemingly balance upon its rough top as if they were growing out of its core. 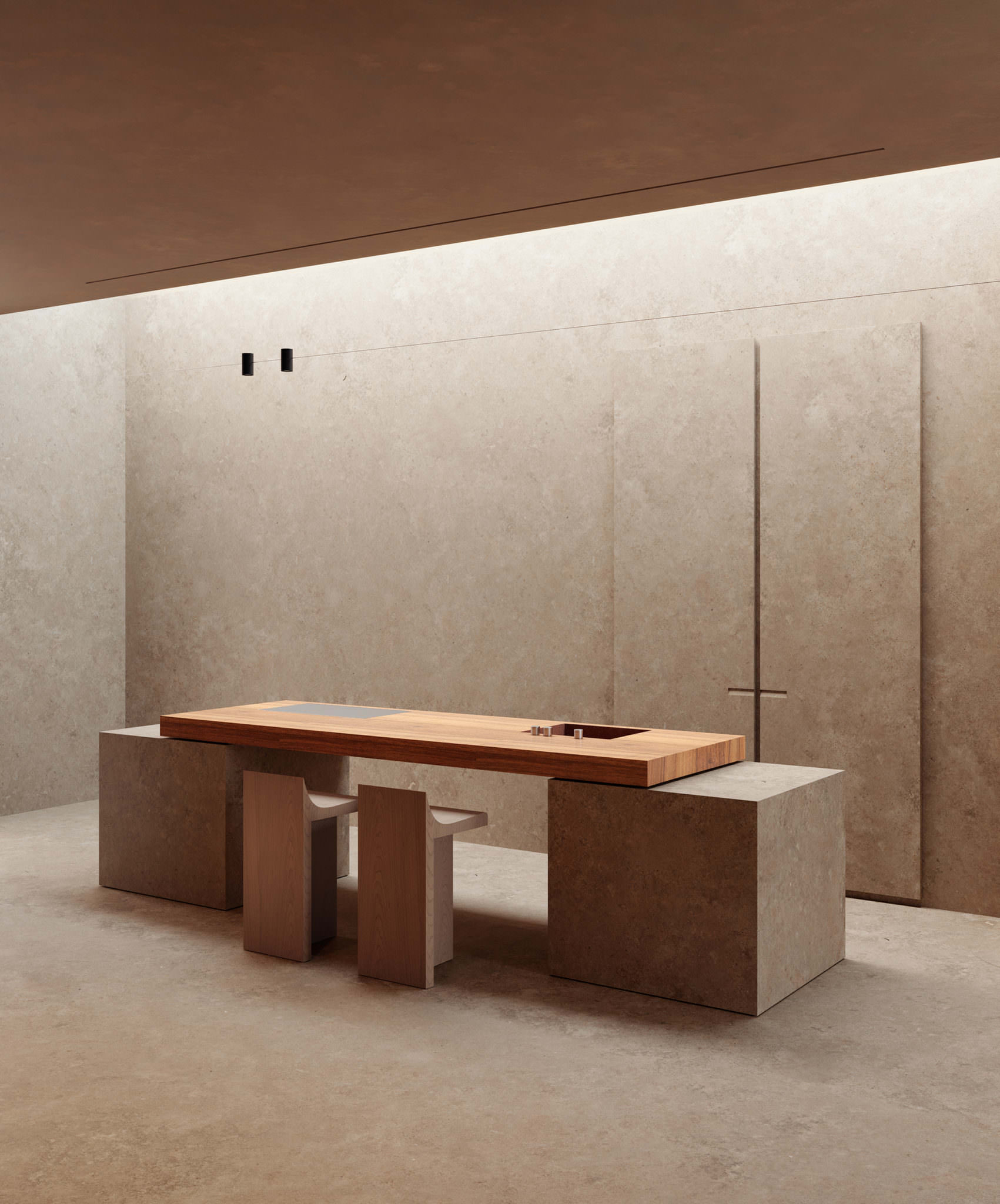 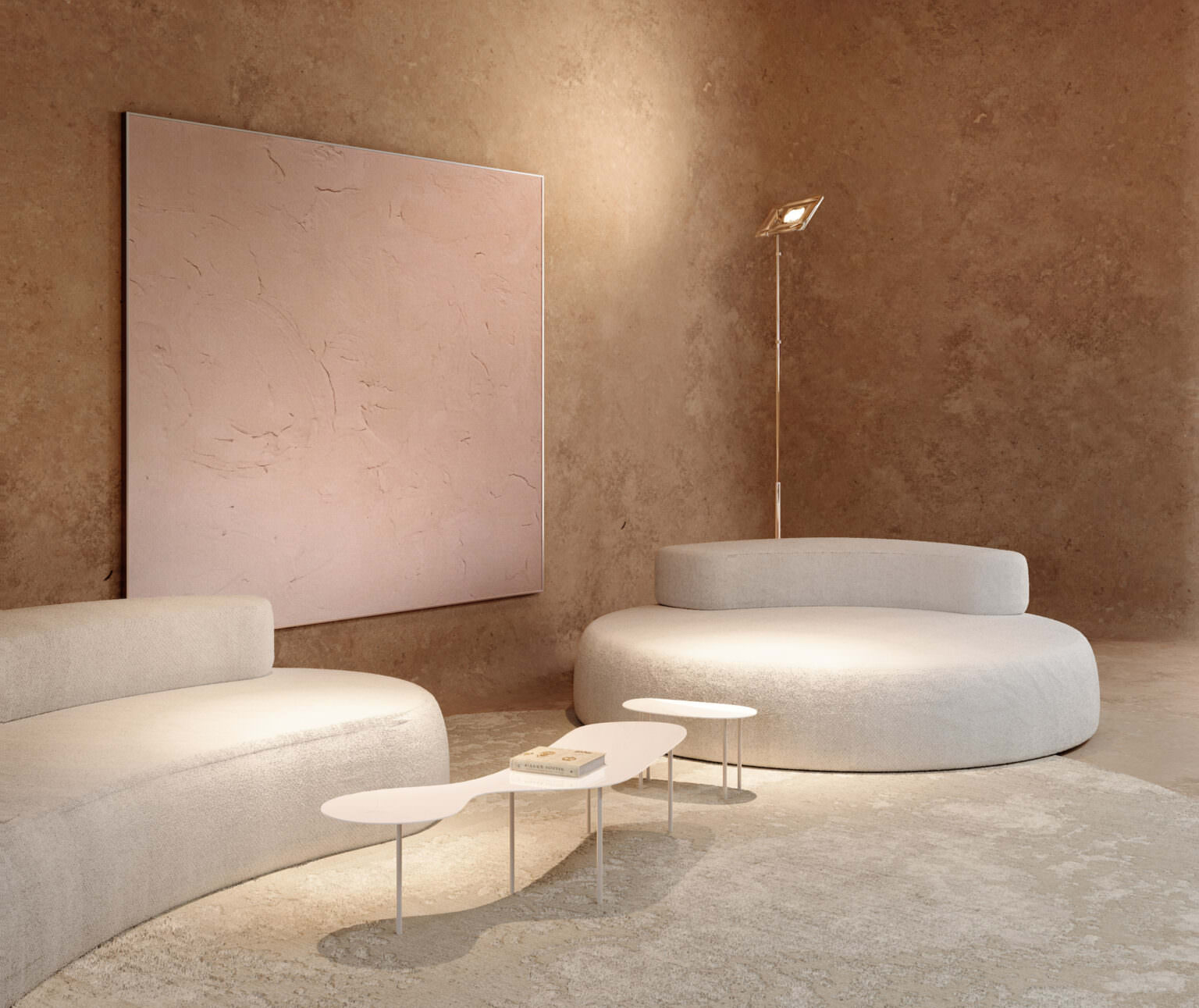 The bathroom unfolds with a similar raw, earthy feel, as Gulesha explains, “bathing in this room looks like bathing in a hot spring”. The floor surface seamlessly continues turning into the walls of the bathtub as if the small pool was created by natural forces. The extreme open plan layout continues into this space, as conventional doors and walls are nowhere to be found. Instead, a smart glass divider that wraps around the toilet area becomes opaque when someone steps inside.

A small kitchen stands with a bold, solid structure that sits in juxtaposition to the cosy lounging area opposite it. Gulesha outlines, “the kitchen area is very strong and a bit aggressive by form and light, so I wanted to create a contrast between kitchen and lounge zones, therefore, I chose a soft coloured painting. You’ll notice that the facture of the walls and this painting are very similar. These brutal natural cave looking walls were very ordinary a few thousand years ago, now we see them so rarely we now paint them on canvas”.