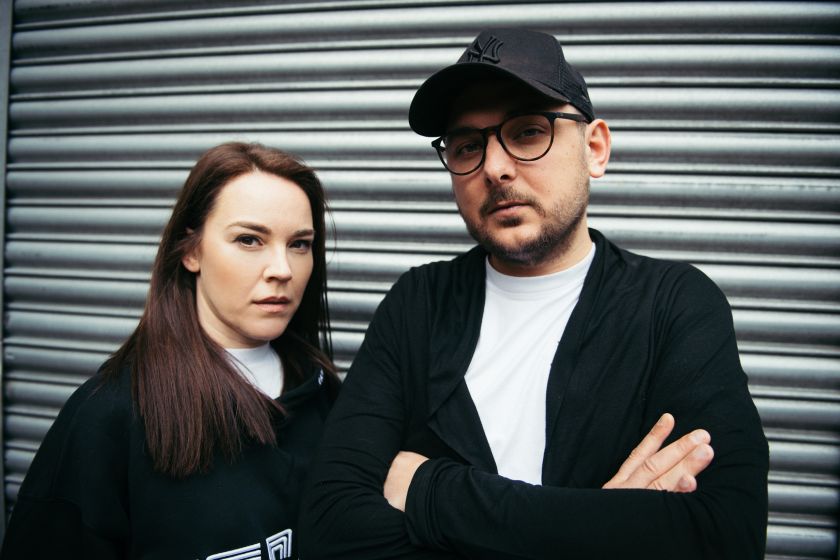 As Glastonbury prepares to mark its this weekend, one highlight from its virtual line-up is Stormzy’s iconic performance of 2019.

The first headline show by a black solo British artist, it was considered to be a significant step forward for inclusion and was widely praised by musicians, politicians and fans for its . The then Labour leader, Jeremy Corbyn, said: “It won’t just go down in Glastonbury history – it’ll go down in our country’s cultural history.”

The award-winning Croydon rapper has enjoyed a phenomenal rise to fame since the release of his song Shut Up in 2015 and the album Gang Signs and Prayer two years later. So when he was asked to headline the Pyramid Stage, we all knew it was going to be special. With an incredible pyrotechnic display, performances by BAME dance group and a full gospel choir, guest appearances by Dave and Fredo and Coldplay’s Chris Martin, and spoken-word pieces from Labour MP David Lammy and author Malorie Blackman – even a collaboration with Banksy – it was a proud moment for Britain.

Behind it all, with 12 months’ of planning and collaboration, was Bronski and Amber Rimell, creative directors at . As Glastonbury reflects on five decades of its performing arts festival, we chatted with Bronski and Amber about the set we’ll never forget.

What was said during that initial conversation about headlining at Glastonbury?

Bronski: Ultimately, we knew about the headline slot a year before, but it wasn’t until January 2019 that we sat down with Stormzy and started to plan things. We were all on the same page in that Glastonbury is an iconic event, and the headline slot on the Pyramid Stage is prestigious. We were also aware of how culturally significant it was, so we knew we had to put on a ridiculous show.

Bronski: [Laughs] We were very excited but early on, we knew we’d have to be respectful of Glastonbury’s history and also respect those who’d broken doors before. So there was this underlying theme that it shouldn’t just be about Stormzy. We could’ve done a show that said, “I’m the greatest rapper of all time”, but we didn’t. And to be honest, that would’ve been so out of Stormzy’s character if we had.

Bronski: Yeah, exactly. The ability to have that platform and share the stage and also celebrate black British culture was the goal. I guess in 2017, with the Glastonbury performance, which was a modified version of his Brixton shows in May, we brought theatre to grime. The genre has evolved since then but bringing that theatricalness to Glastonbury in 2019 was something we had to do. 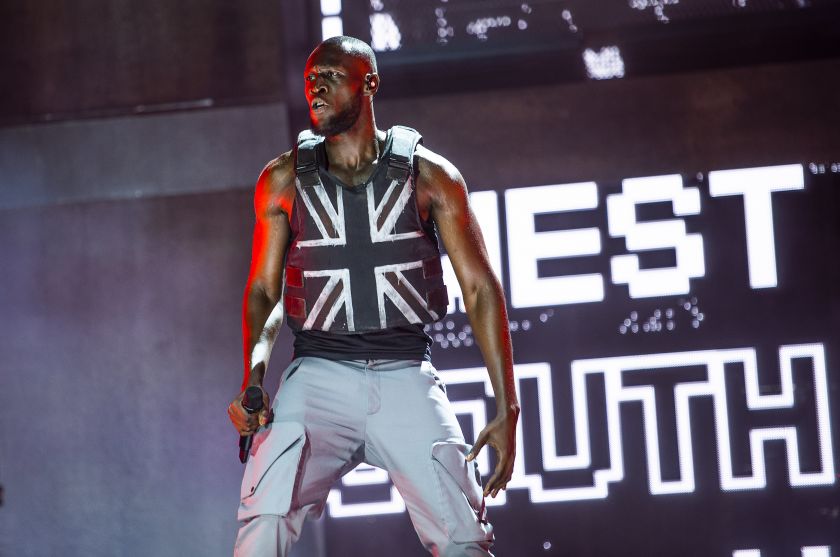 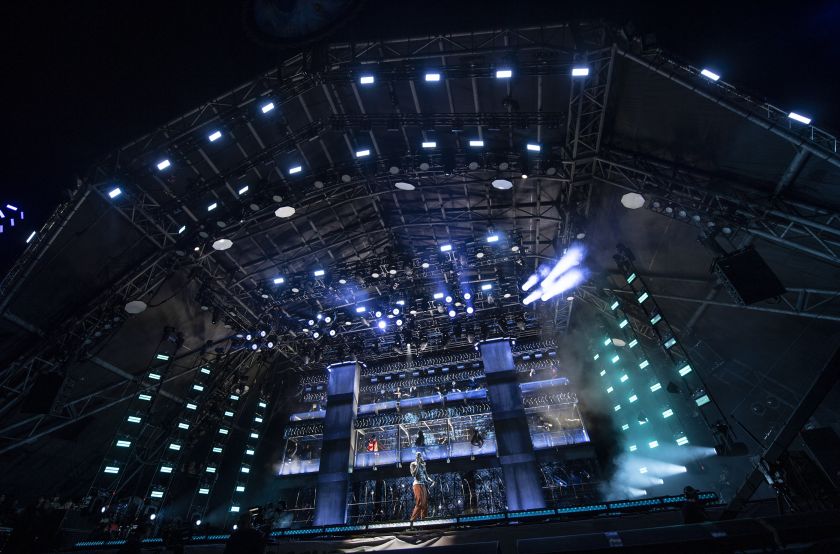 Were there any big ideas that didn’t make it to the final edit?

Amber: I think everything did make it. Even the set design! [Laughs] Which was huge. The production team at Glastonbury was amazingly supportive of our vision. We think it was one of the most significant sets they’ve ever had on the Pyramid Stage, so that was a massive tick from us. Of pushing the boundaries. But I’d say everything that we jotted down, adding things as we went along, there was nothing that had to disappear.

Bronski: Yeah, there might have been little pockets of creative ideas that didn’t quite make it. But the one thing we all agreed on is that everything in that show had to feel right, in our hearts and guts. If it didn’t, then it might’ve felt forced. We didn’t want the show to be “preachy” at all. And I don’t think it was.

Stormzy mentioned a Jay-Z performance at , where he says to the crowd, “If I can do it, you can do it!” In it, Jay-Z also talks of creating a culture. When we watched that, it set things up for us perfectly – it inspired our hard opening scene for Stormzy, with the huge flames.

Yeah, those flames were incredible.

Bronski: We were the first to use those flames. And they ended up being called the ‘Stormzy Flames’. [Laughs] No one has wanted to rent them since.

It felt like the story of Britain – one I’m proudly part of. And you’re right, it felt natural. It was political but not forced.

Bronski: Yeah, and if you noticed, Stormzy doesn’t say one political thing out of his mouth. Not one. 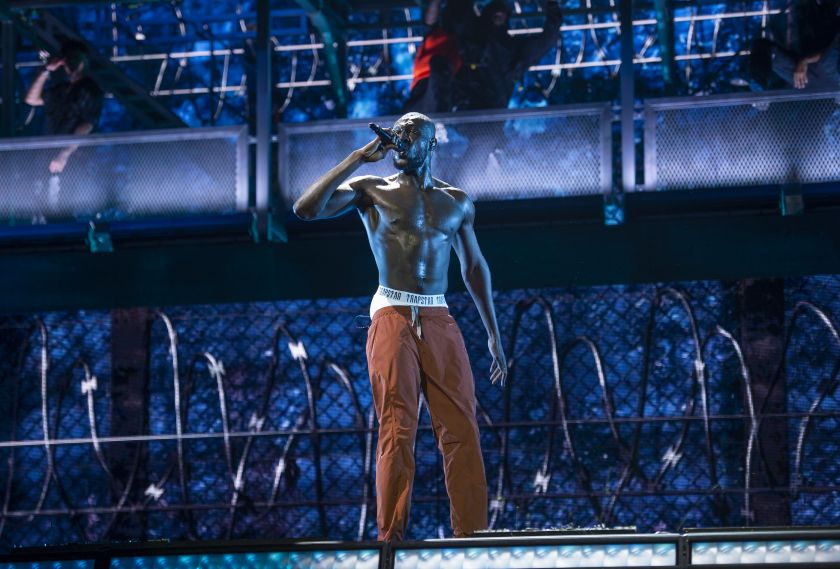 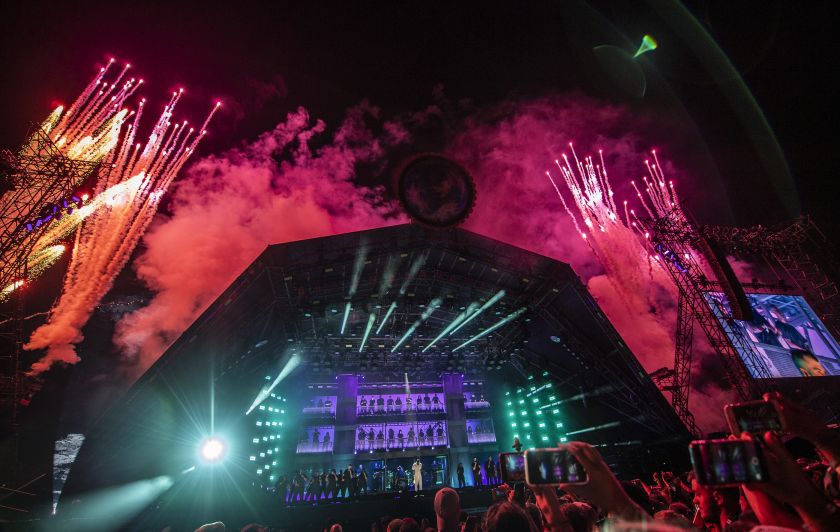 Was that a conscious decision then?

Bronski: It sounds cheesy, but Stormzy always puts on a huge show. That’s part of who he is. And yes, we were aware of the bad press when he was announced as the headliner – not that it bothered any of us, at all. I guess there was an element of, “Don’t underestimate. If you’re about to watch this show and underestimate what a rapper from South London can do, you are seriously fucked.” [Laughs] But we would never say that out loud.

Amber: Yeah, and we knew that not everyone watching it would be an avid fan of his. So we did want to make it accessible and for people to understand and enjoy him as his fans do. We were conscious of the wider audience and just wanted to celebrate him.

Bronski: Not only is it a massive festival with a huge crowd, but it’s also a television show seen around the world. We treated the project as such. Following the performance, we got nominated for a BAFTA – which is still like… what the fuck? But yeah, there were two audiences: those who will watch the headliner no matter who it is, and those including the vast black community of Britain who was rooting for their boy and saying, “Do us proud!” Over the 75-minute performance, we wanted to make something that would appeal to both.

You had Ballet Black, a 54-strong gospel choir, a tribute to Croydon architecture – you literally brought South London to the farm.

Bronski: It’s funny you should say that. Lighting Designer Tim Routledge, who worked with us on the set, said, “In 2012 Danny Boyle brought a farm to East London. In 2019 Stormzy brought South London to the farm”. 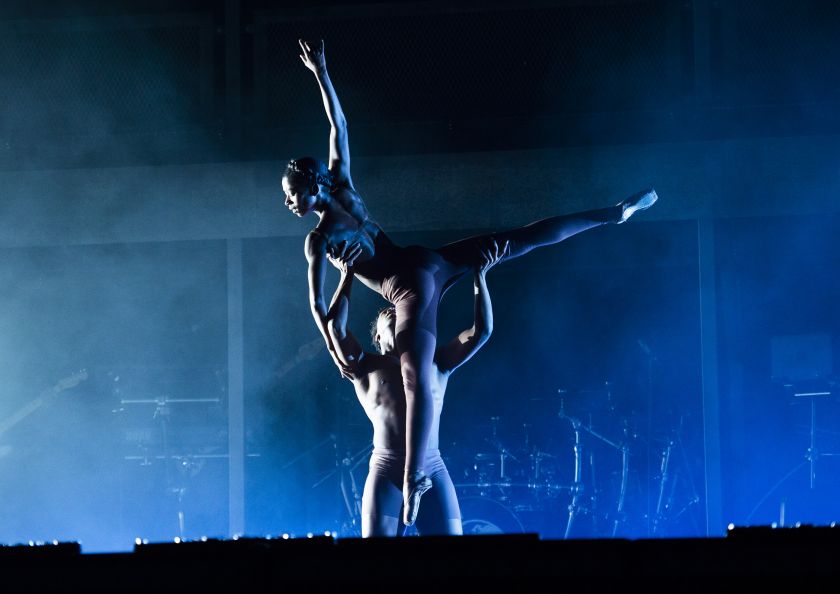 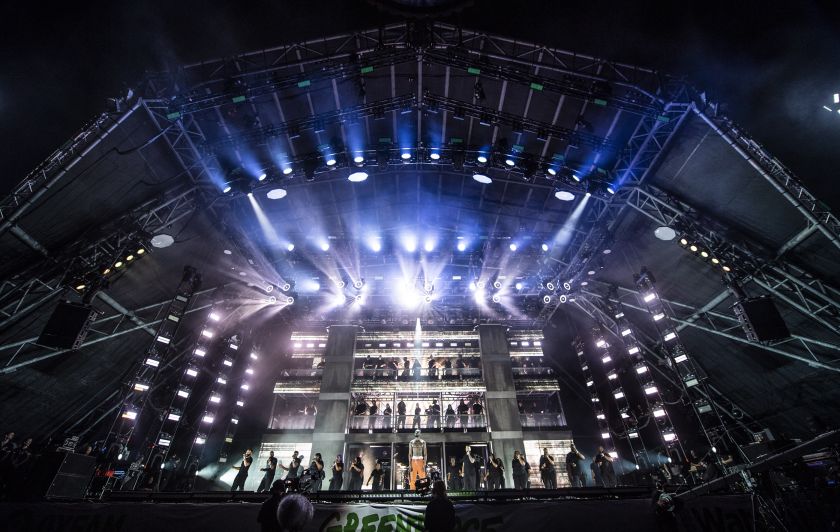 The set was like nothing we’ve seen before. Can you tell us more about the inspiration?

Amber: We worked with the set designer, and our concept was to celebrate the culture of South London. We particularly drew inspiration from the architecture of East Croydon and gave that vision to Misty, who came up with a set featuring different levels – one that allowed us to have more performers on stage. She did an amazing job.

Bronski: Yeah. Celebrating Croydon’s architecture and having multiple levels to show scale was so important and Misty smashed it.

What was the feedback?

Amber: We went into a daze for a few days afterwards, not realising what had just happened. Reading the reviews and hearing how the show had been deemed “iconic” it was what we were striving for, but we were so overwhelmed by the experience, it took a while to sink in.

So how involved was Stormzy in planning the show?

Bronski: I would say we were on the same page from the start. It was a creative collaboration. Stormzy’s a musician, so he works super close with his music director, , who’s fantastic and they focus on the music, but interestingly, we’re also involved in those conversations. On the visual side, we visit different ideas until something fits.

Amber: I think he trusts us a lot, and we add value by talking through his ideas and showing him how they could come to life. For example, Stormzy wanted to feature Ballet Black in his Glastonbury performance but didn’t know how to make that happen. He also asked to perform during that segment – we helped him bring that to life. 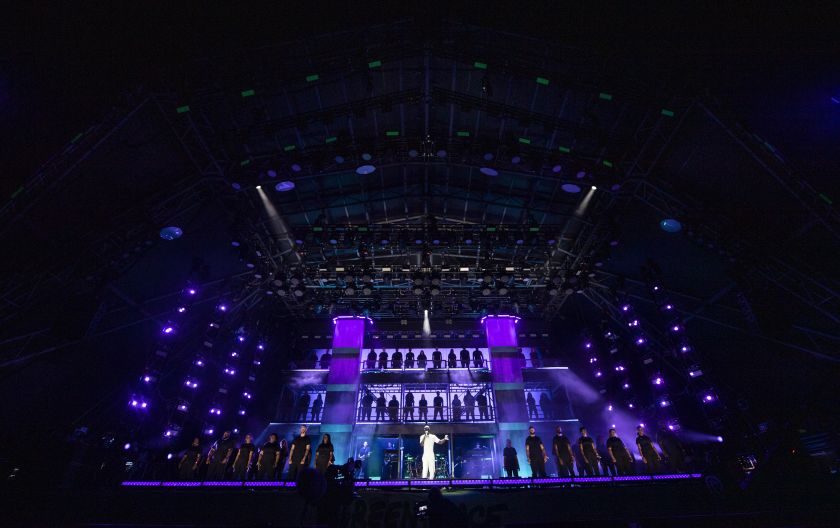 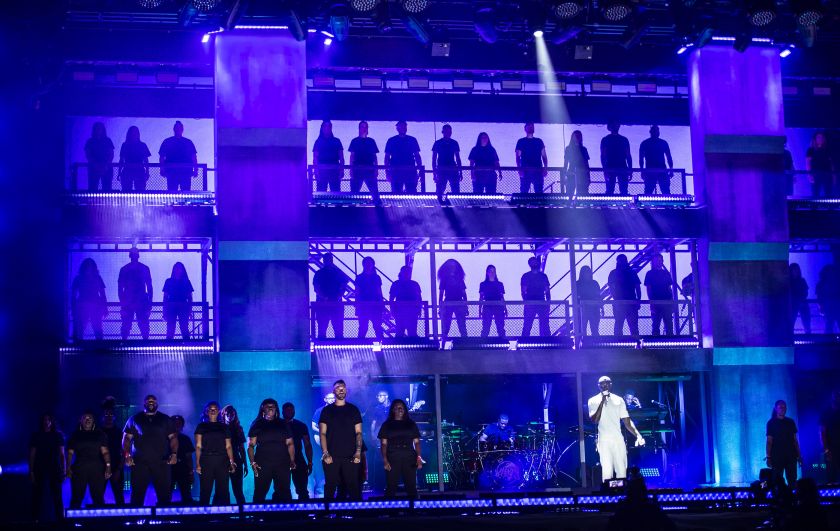 Where were you when it was happening?

Bronski: I was at front-of-house with my own little station where I can speak to everyone, including the performers. If the applause is amazing, I’ll be on the mic saying, “Don’t start yet! Let is sizzle!” Sizzle is my favourite word. [Laughs] “Sizzle, sizzle, and… go!”

Amber: I visited Stormzy’s dressing room about 10 minutes before the performance. We just looked at each other and I nodded and he nodded back. I couldn’t even say, “Good luck!” It didn’t feel right. It was too important a moment to say those two words. We then wished all the performers, dancers and singers good luck and I went and sat in the gallery with Glastonbury’s director, Janet, watching the whole event unfold on screen.

I bet it was very emotional

Bronski: The whole day was. From the moment we woke up to everyone arriving… the way we all said hello to each other that morning was weird. Everyone knew. Glastonbury is in our blood now. I can’t explain it. If you get the opportunity to be part of the Pyramid Stage, it’s like some weird spiritual thing. I’m still not sure it happened. 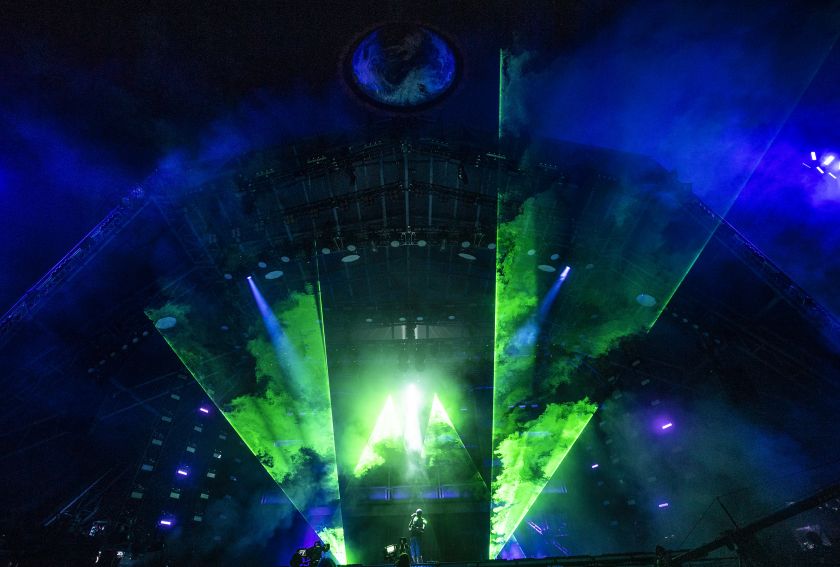 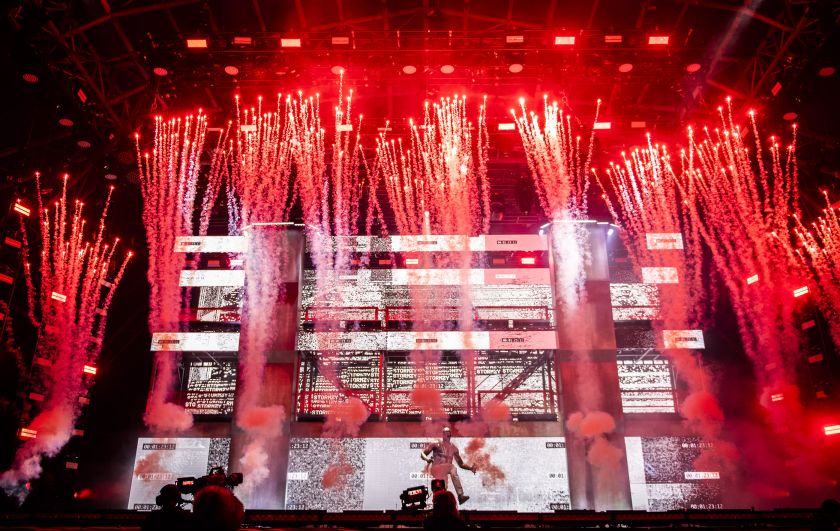 Did Stormzy feel a weight of responsibility?

Amber: The title of Stormzy’s second album, Heavy is the Head, gives us an idea that he carries a lot on his shoulders. But with any performance, he does so in a positive way. He doesn’t feel nervous or panicky; he instead thinks, “This is my moment and I need to do this, not just for me but for the community”.

Bronski: We were so prepared. We rehearsed so much.

Amber: Stormzy was excellent in rehearsals. He trained for months up until the big night, so he was physically ready.

Bronski: There wasn’t anything else we could’ve done to prepare. 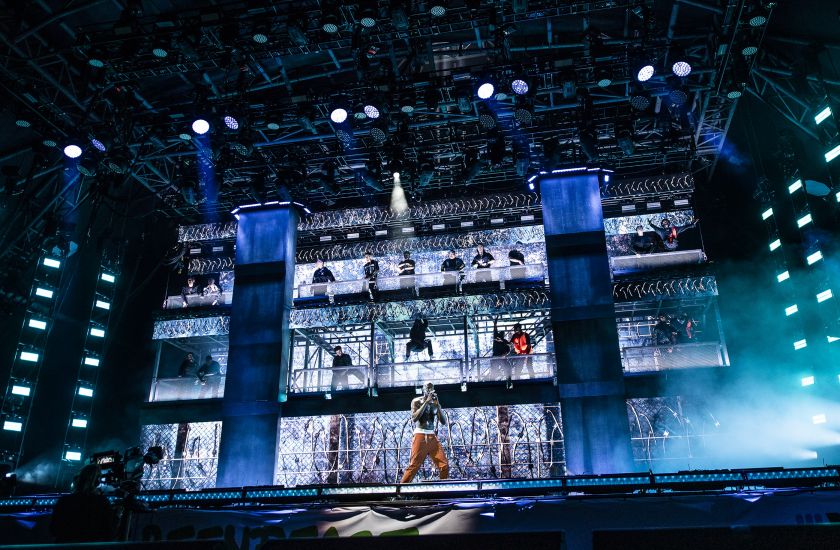 Did anything go wrong?

Bronski: It got close to the wire on set but we got there. It was definitely the biggest and heaviest set that has been on that Glastonbury stage, so we held our breath. We’ve certainly given them something to think about, as we’ve proved you can build huge sets on the Pyramid.

How are you going to build on this performance?

Amber: Well, not long after Glastonbury, we saw Stormzy again and he said, “So guys, what are we going to do now?” [Laughs] We all just laughed. For every performance moving forward, we want to do better than the last.

Bronski: And we always want to work on that scale. For me, he is the best performer in Britain right now. Period. No one can do what he does. Or in the way he does it. We want to continue to work at a scale that suits the canvas, I guess.