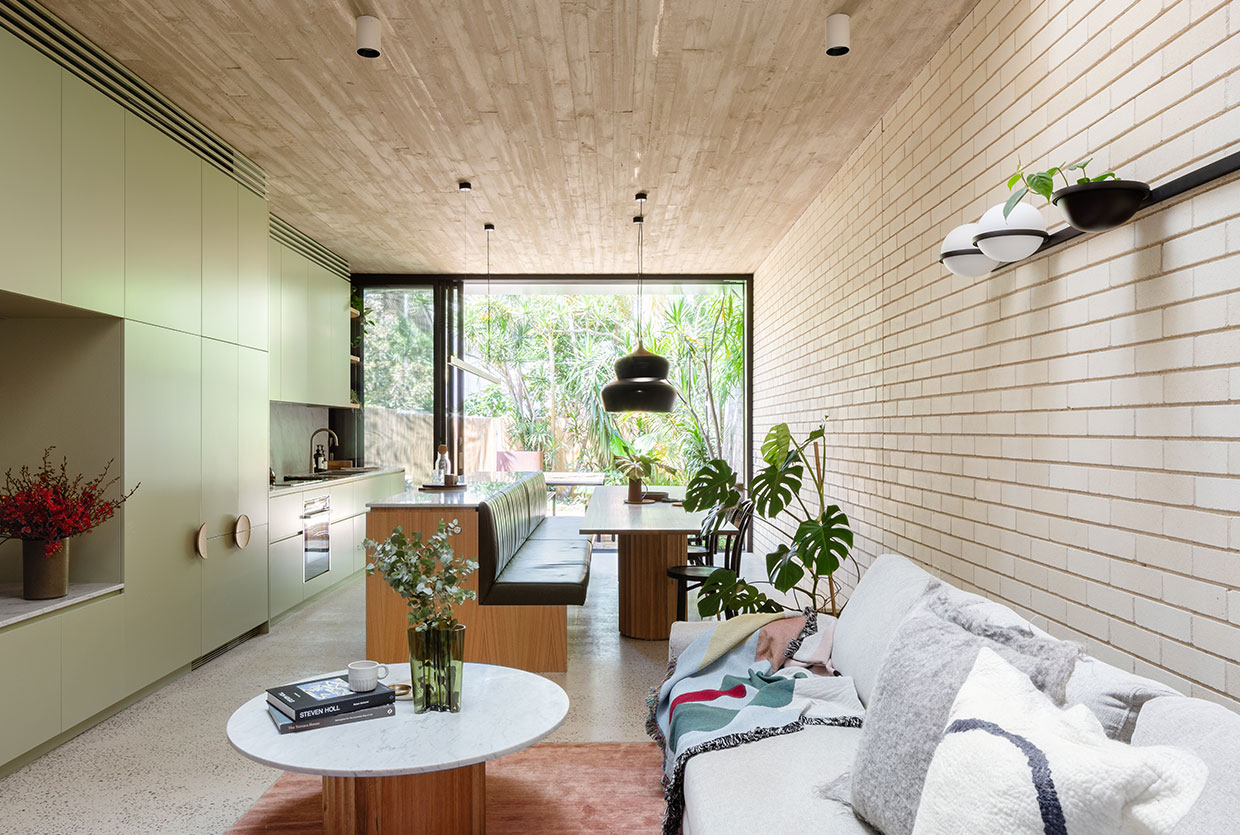 In 2014, Carter Williamson Architects were recruited to transform a narrow heritage semi into a gathering place for their clients’ family and friends, while creating a peaceful sanctuary for the residents. The home needed to block out the noise from nearby roads and planes flying overhead, and honour the kitchen as the main heartbeat where conversations take place and special connections are made.

set out to transform a tight 5-metre-wide block into a home that balances practicality with a circulation sequence that sprinkles a little bit of magic. 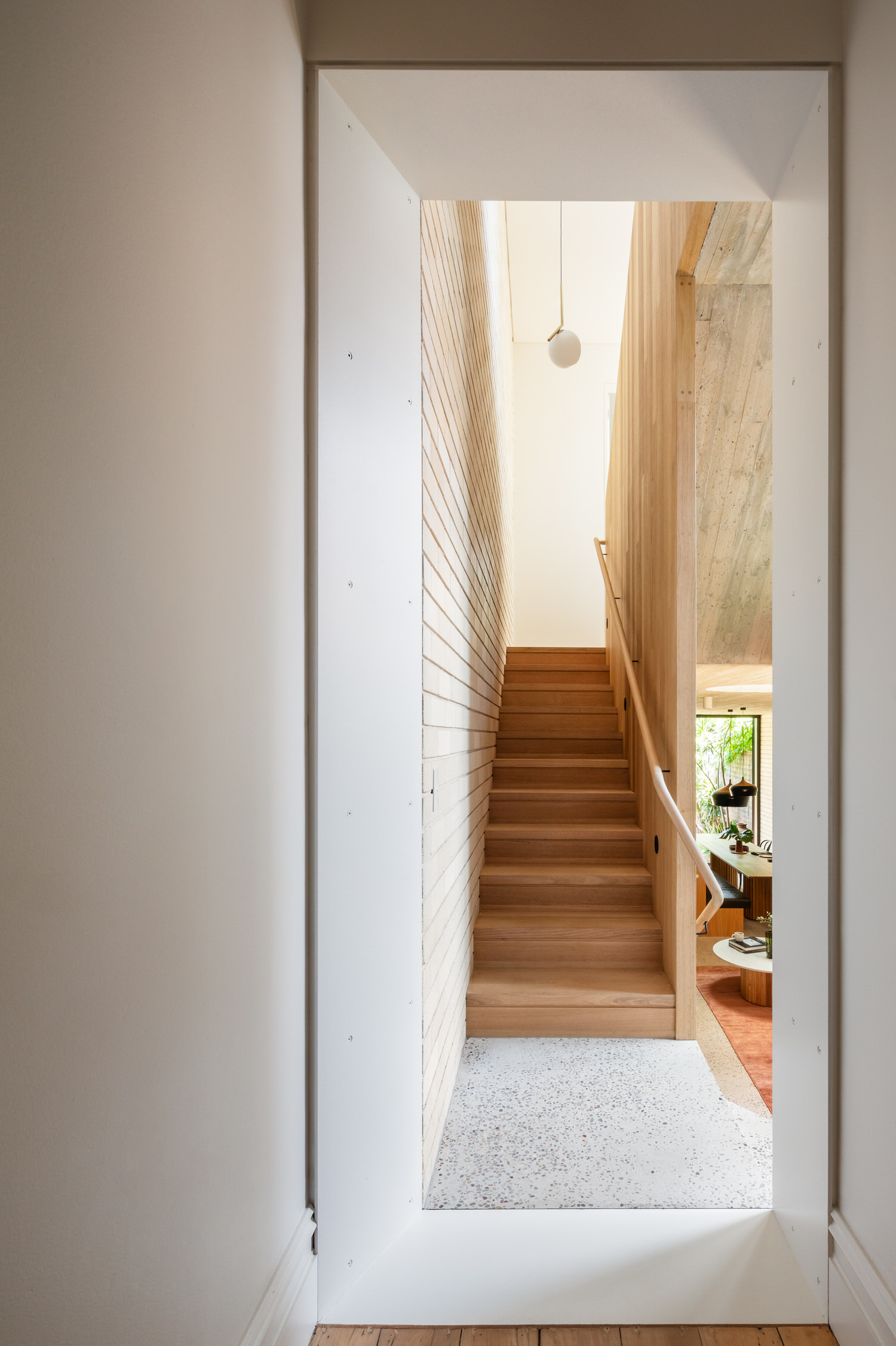 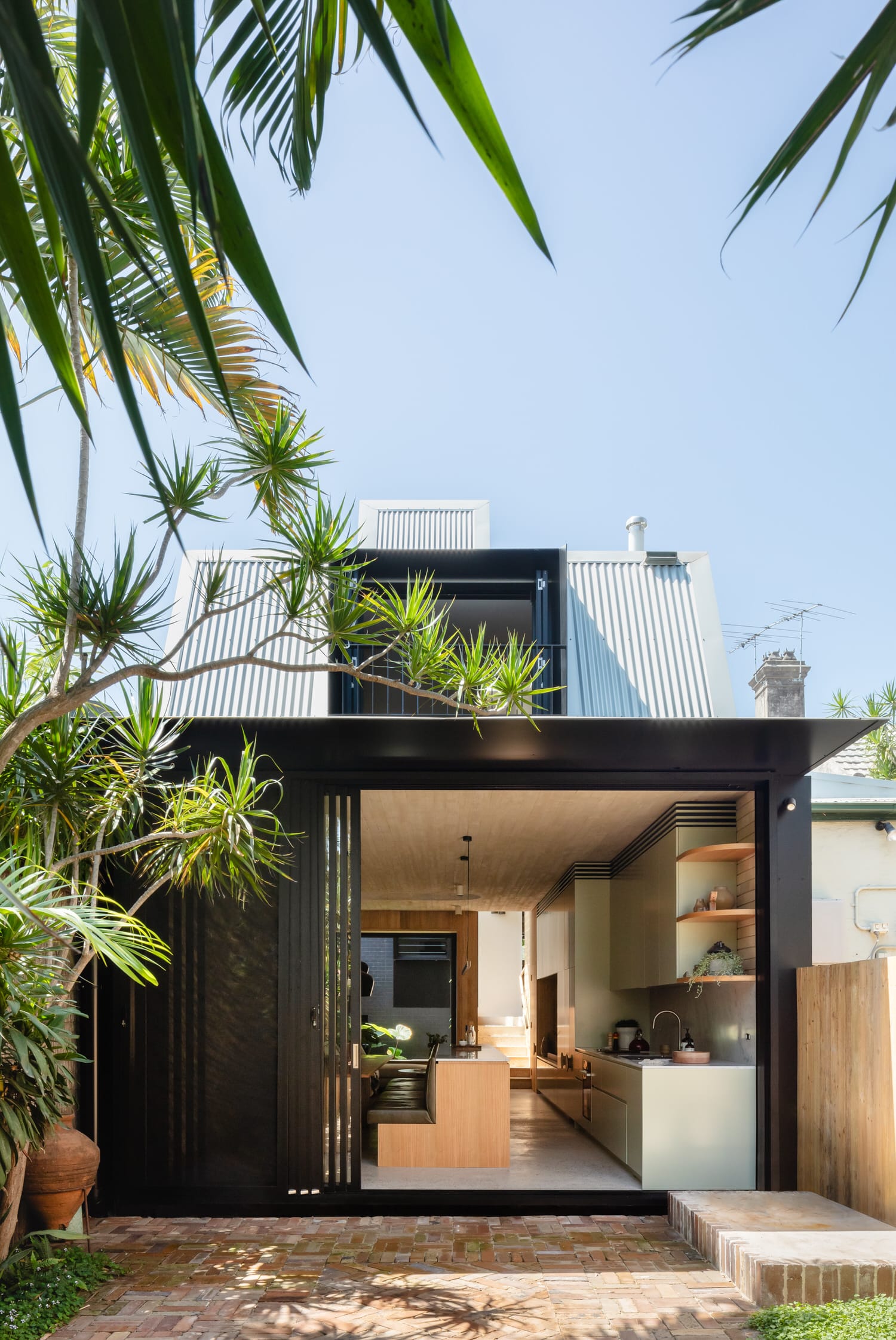 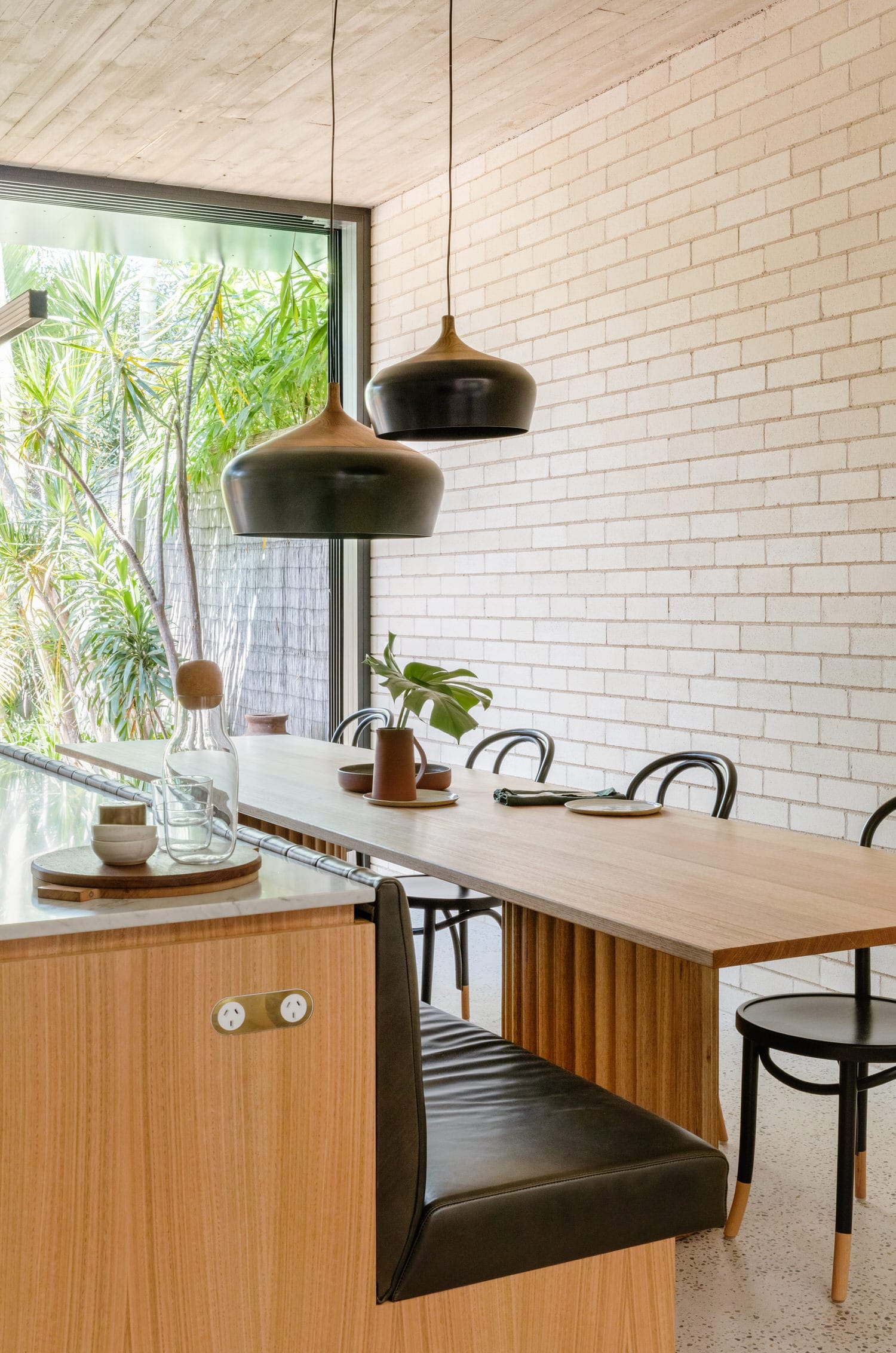 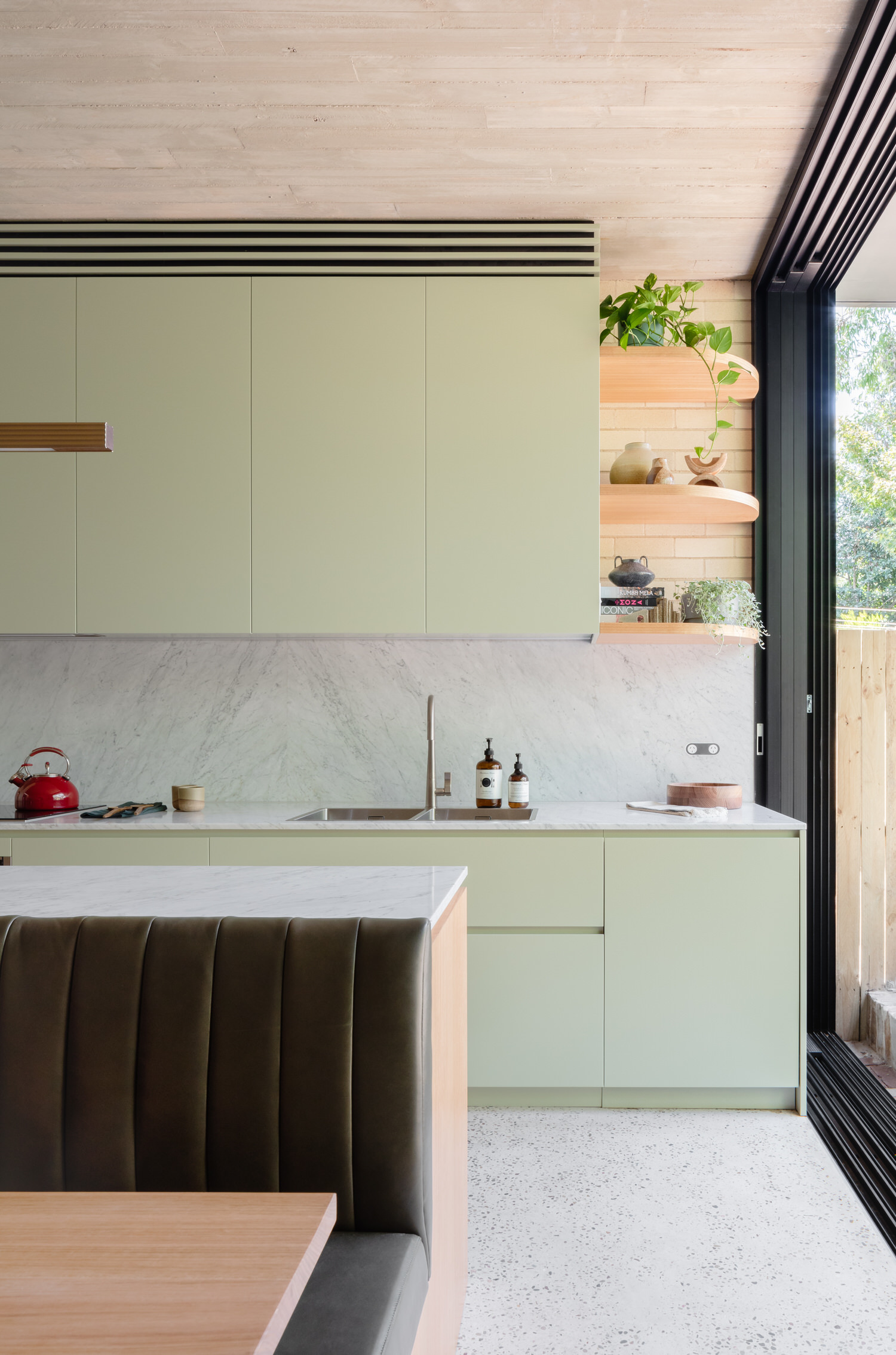 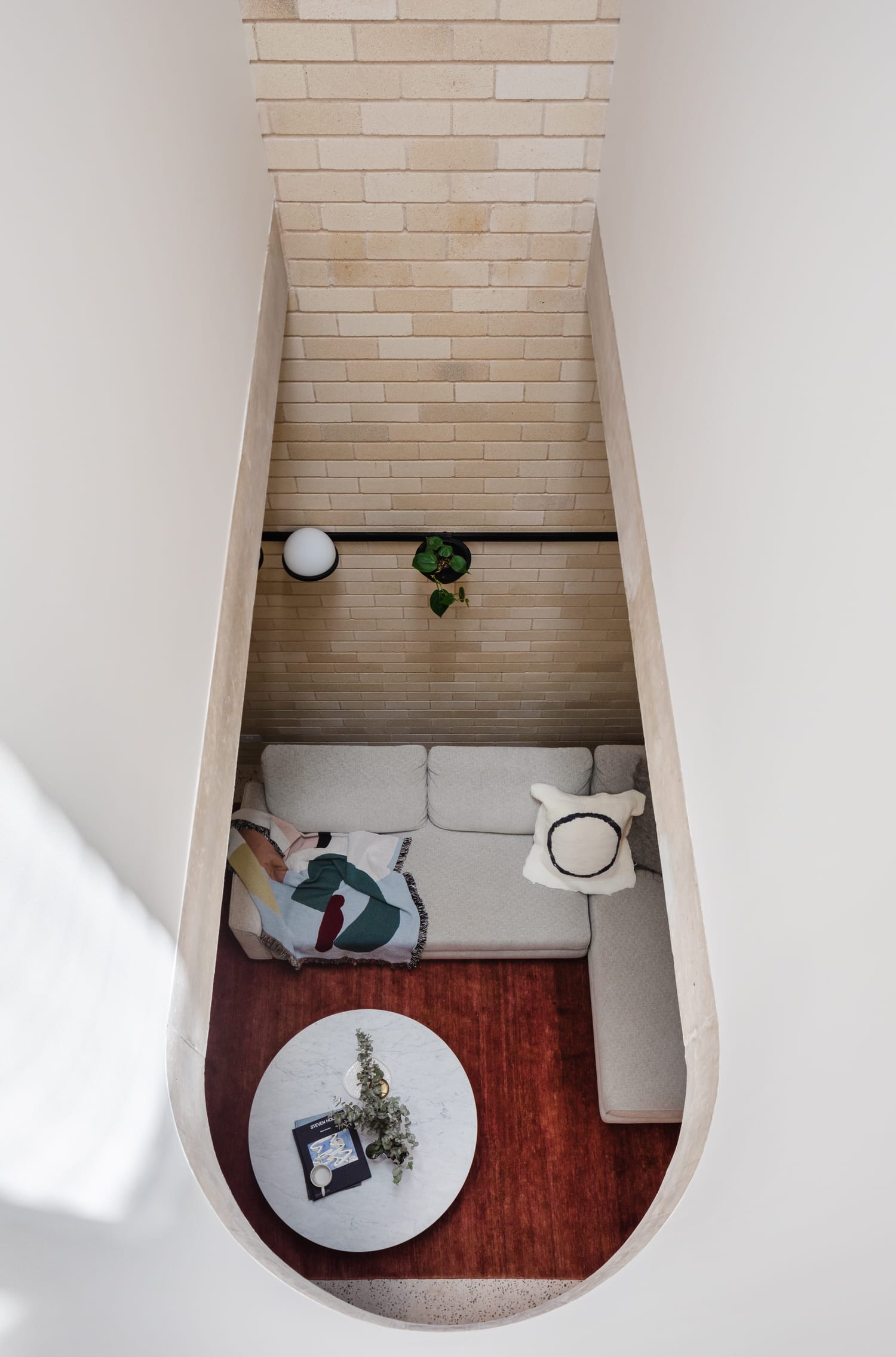 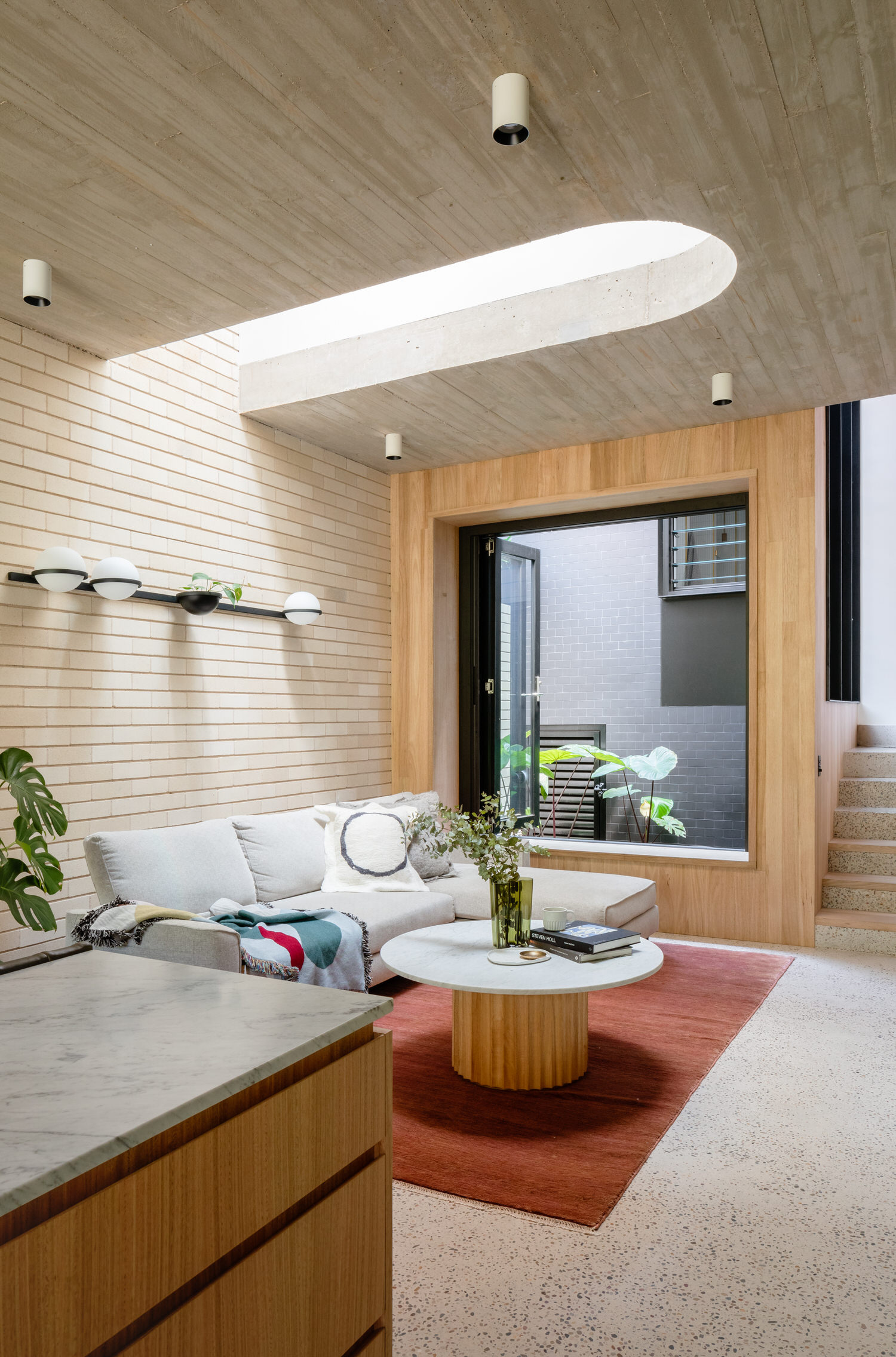 “Concrete Blonde is an architectural jewellery box,” explains Ben Peake, Associate at and Lead Architect on the project. “The house unfolds and reveals itself from a tight 5m wide heritage facade with a south-facing yard into a generous, light-filled, and warm home.” Inside, warmth is expressed through earthy tones and natural materials, with natural light captured through the skylights and the courtyard well.

An arresting curved linear void is the hero of the new extension. It sits above the living area and carries northern light from a high window deep into the interior. “We often use and voids to deal with the challenges of planning and less than ideal orientations,” says Peak.

The living space flows into the kitchen and dining area, with sliding glass doors visually dissolving to connect the interior with the rear courtyard designed in collaboration with Landscape Architect . These four spaces merge into a seamless indoor-outdoor space – the new heart of the home.

“To facilitate light, a tile-lined and plant-filled courtyard is the mediator between the homes’ living and private spaces,” says Peake. One side of the courtyard addresses the main living area, while the other brings light to the bathroom and stairwell. 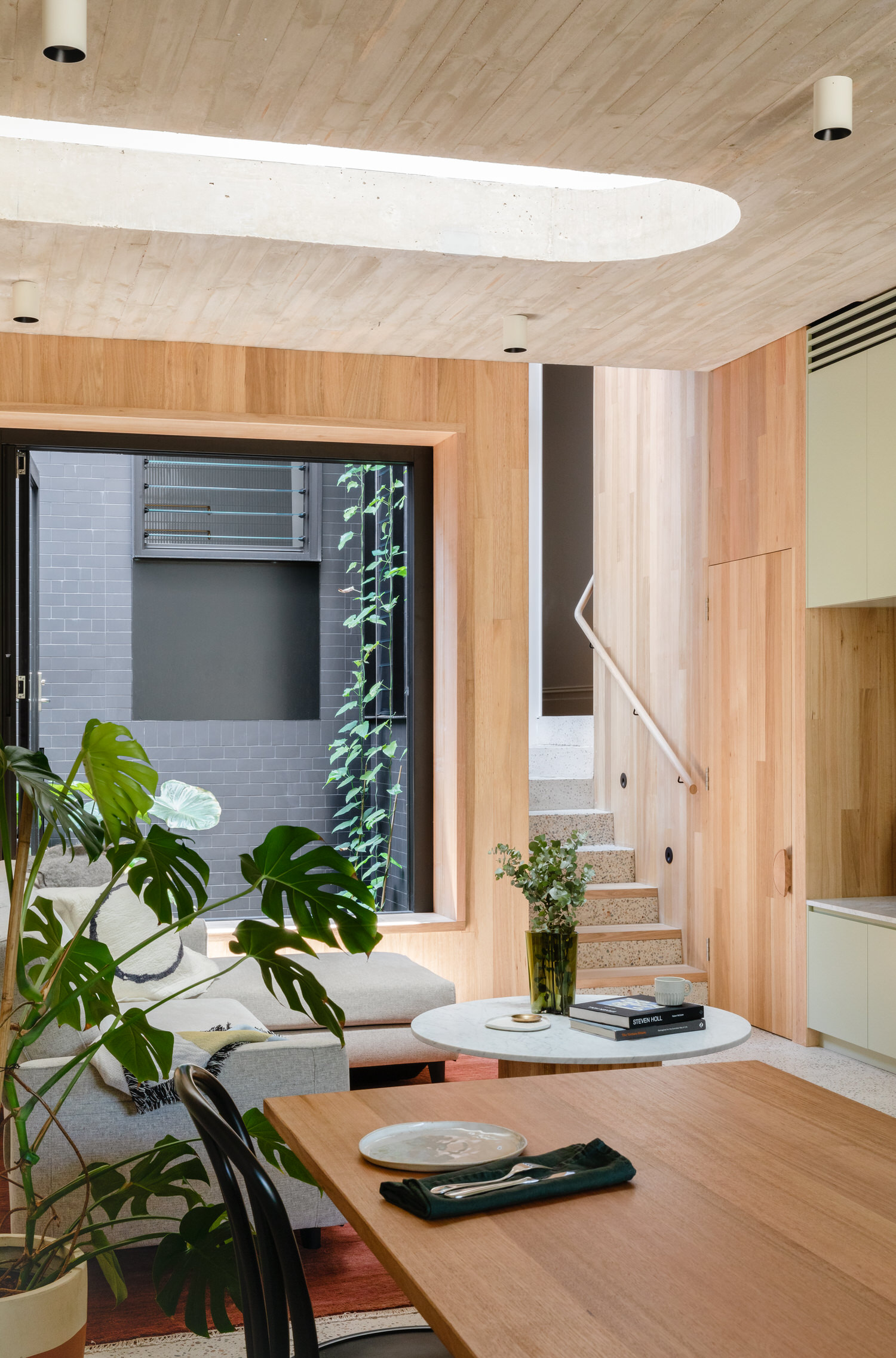 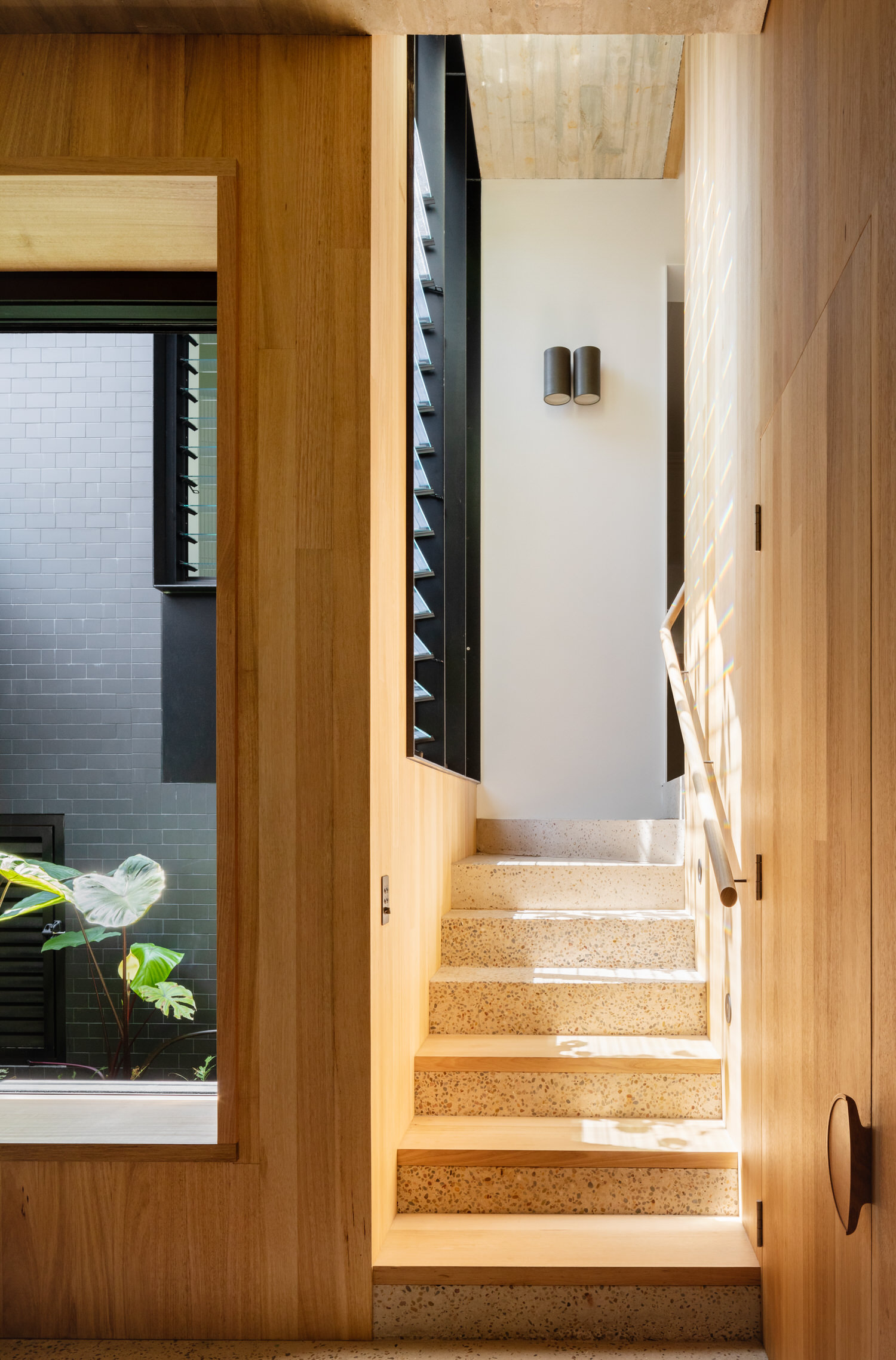 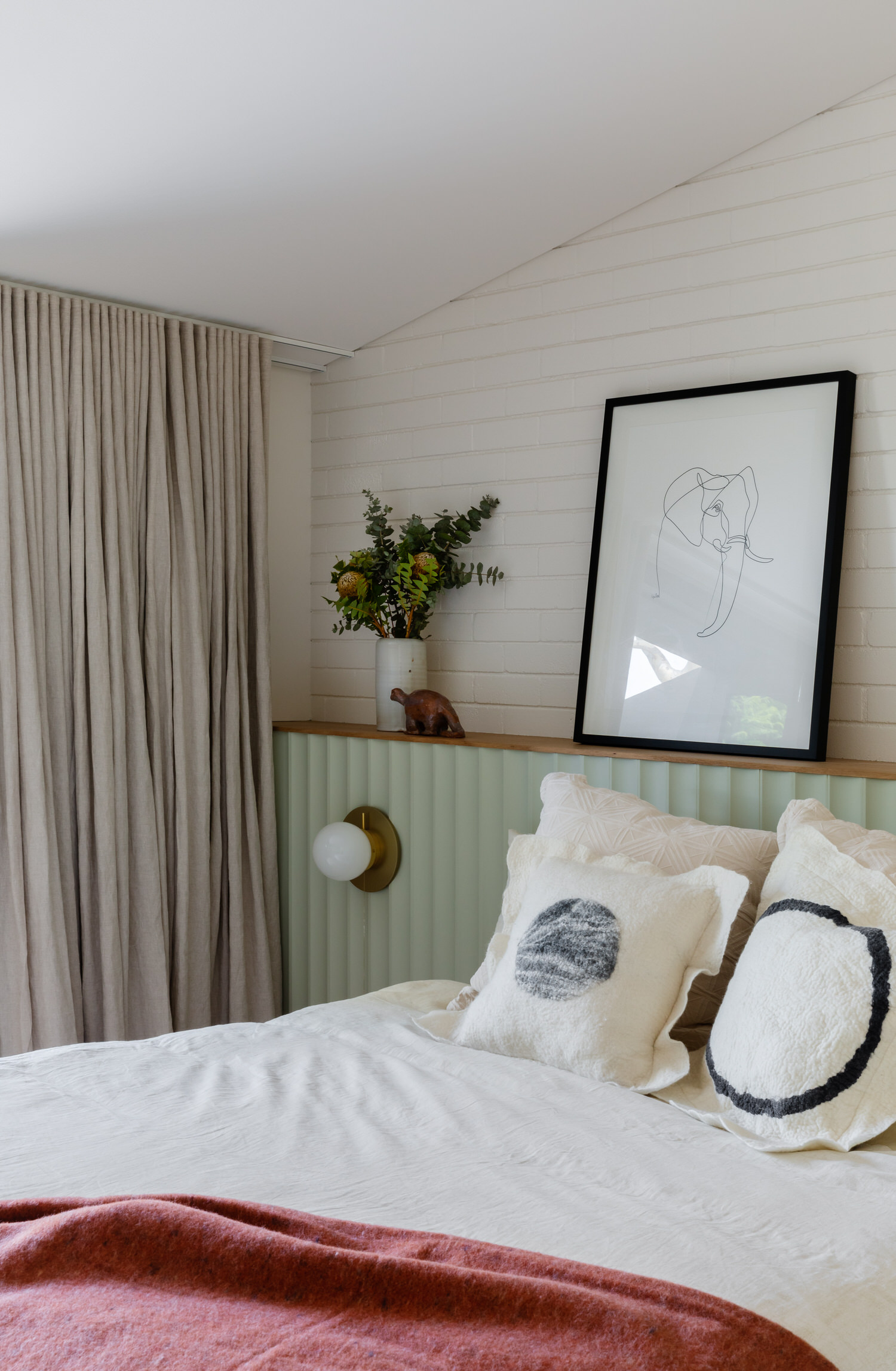 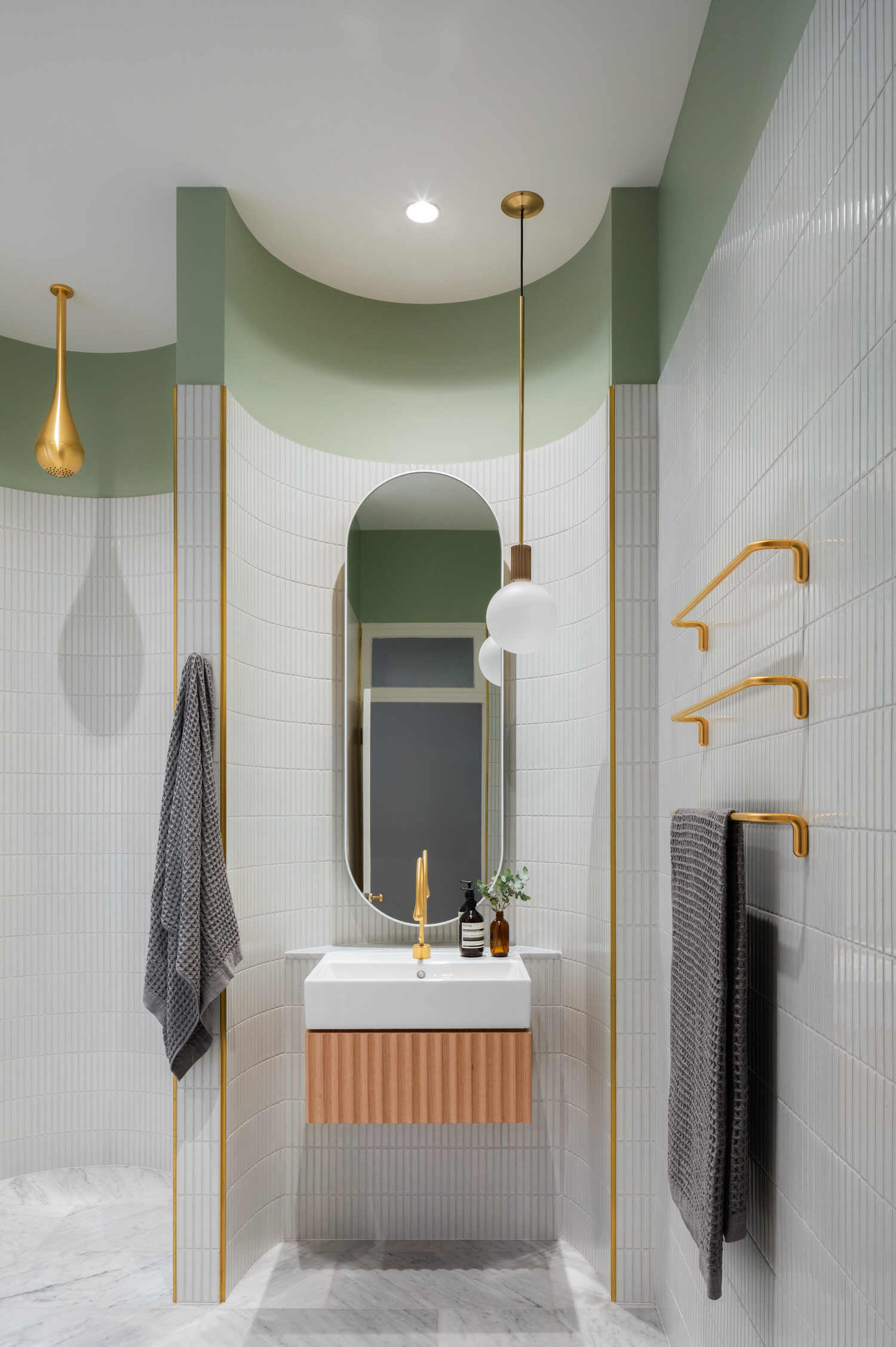 Upstairs, the main bathroom, located in a space that was once a bedroom, contains a hidden laundry and expected individual functions like the toilet, basin and shower. Each one was subdivided into micro-spaces and celebrated with curved tiling alcoves. “These small gestures hug you as you use the space, diving the large room into smaller areas,” explains Peake.

The home’s robust palette is a direct response to the client brief, which called for a no-nonsense interior that felt warm and inviting. “They wanted polished concrete, exposed brick, natural timber and stainless steel to feature within the home, but wanted to keep a feeling of elegance and clever detailing,” says Peake.

Concrete and feature extensively in the new extension alongside custom timber furniture. The Tasmanian oak kitchen cabinet becomes a bench seat for the dining area, while the full-height mint green cabinetry compliments the dark-green leather upholstery. “The greens through Concrete Blonde are a nod to the native gumtrees swaying in the backyard, the homes former kitchen colour, and memories of our clients extended family homes in Greece,” says Peake. The dining table is a collaboration between Carter Williamson and , an Orange-based furniture designer.

Carter Williamson believe that good architecture is the result of a genuine collaboration between the architect, the client the builder (Andrew Burton Constructions), and honouring everyone’s ideas. Their primary challenge to create a generous, light-filled home on a narrow block with a south-facing backyard, while maintaining the heritage exterior, certainly wasn’t the easiest of briefs. The team rose to the occasion by delivering a home that utilises every inch of available space to its advantage, with nuances that punch well above the property size. A home that’s equally a vivacious space for social gatherings and a serene sanctuary treasured by the clients. 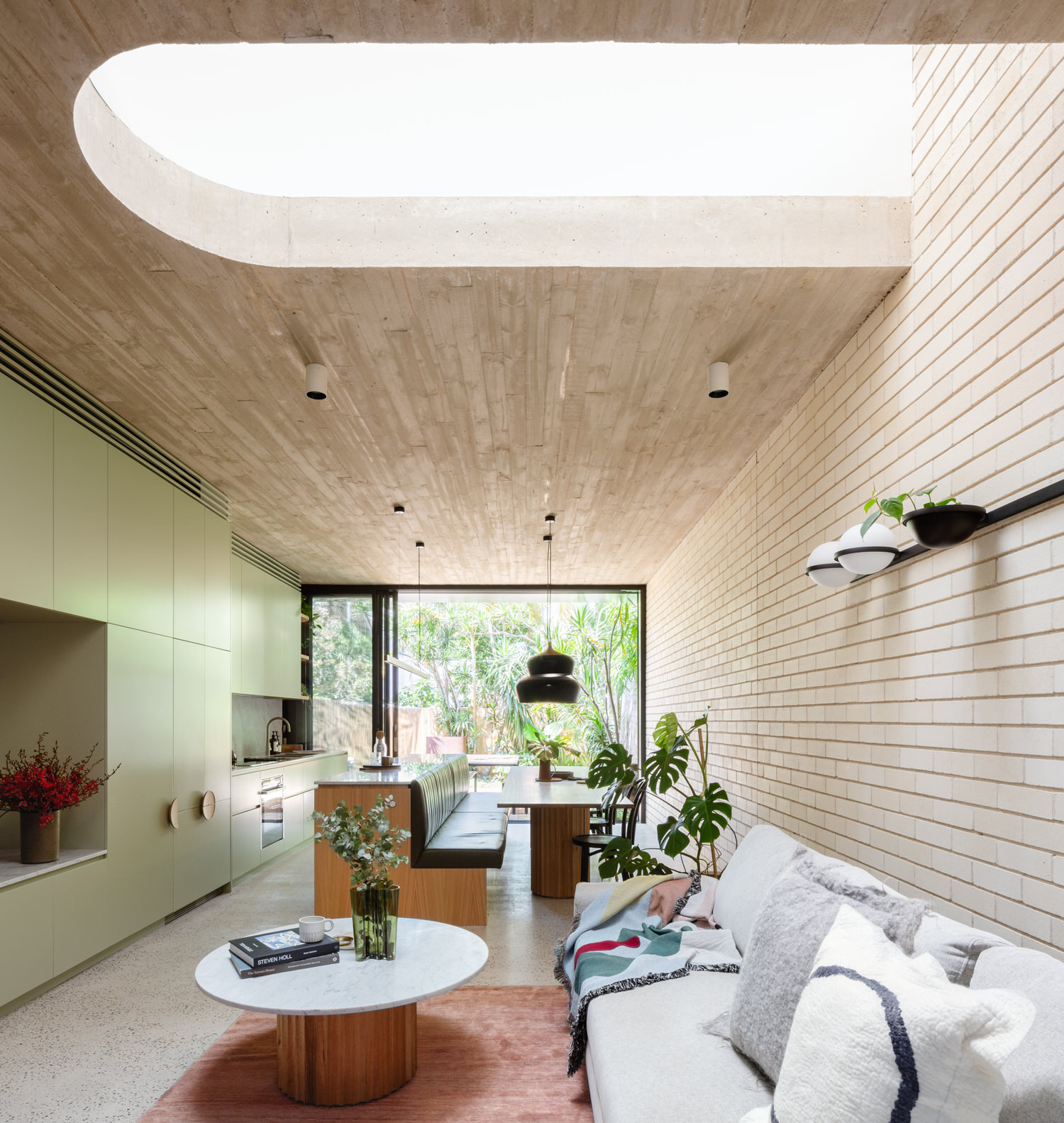