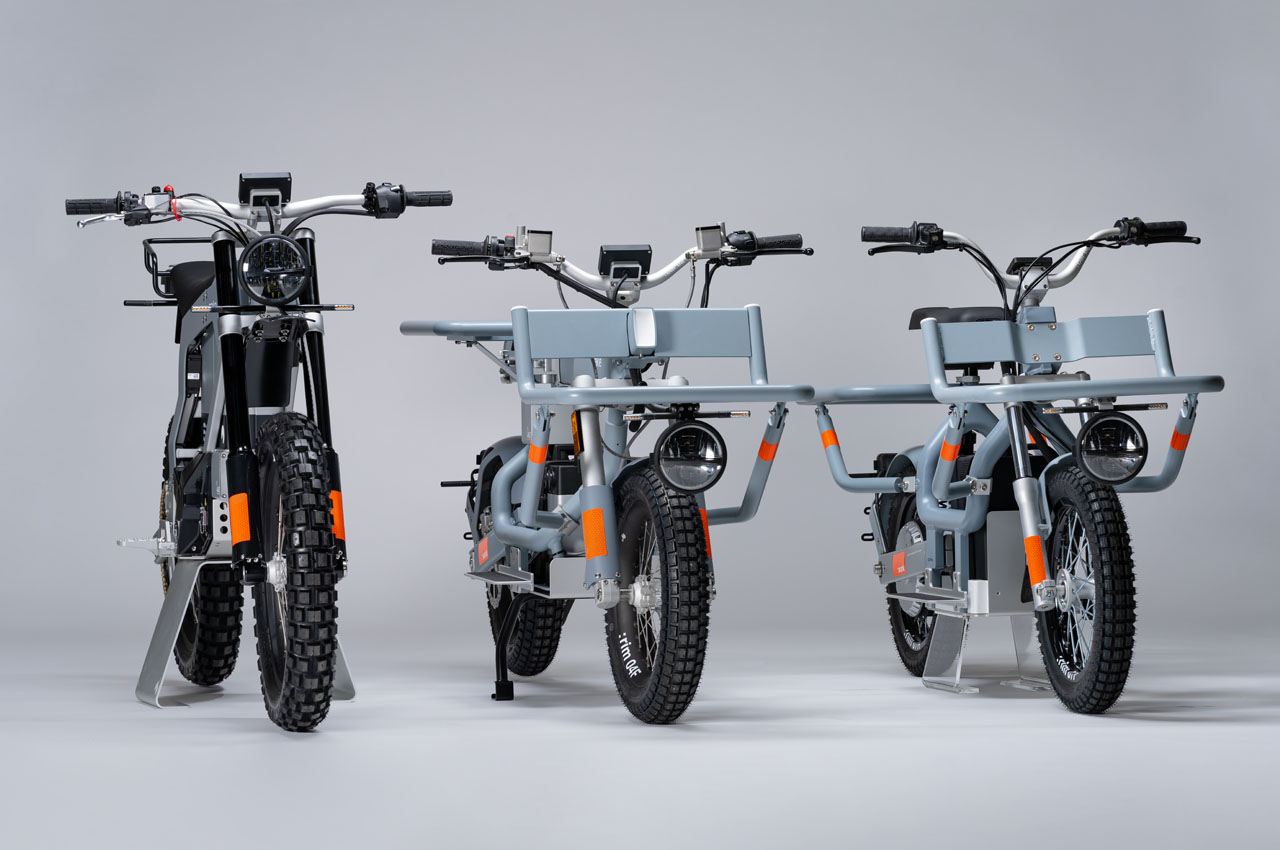 The Sweden-based electric motorcycles maker CAKE has revealed their latest last-mile delivery and professional applications’ electric bikes for every type of user. Unveiled at the (EICMA), the new powerful and durable line-up is called the CAKE :work series.

According to the founder and CEO of CAKE, the new series is custom-made for transitioning last-mile deliveries and mobile workforces to zero-emission society. The company’s vision with the new series is to create a future for short-haul transportation and commuting people in an eco-friendly and economical manner. To cut it short, CAKE believes the “last-mile deliveries will be electric and run on two wheels.” 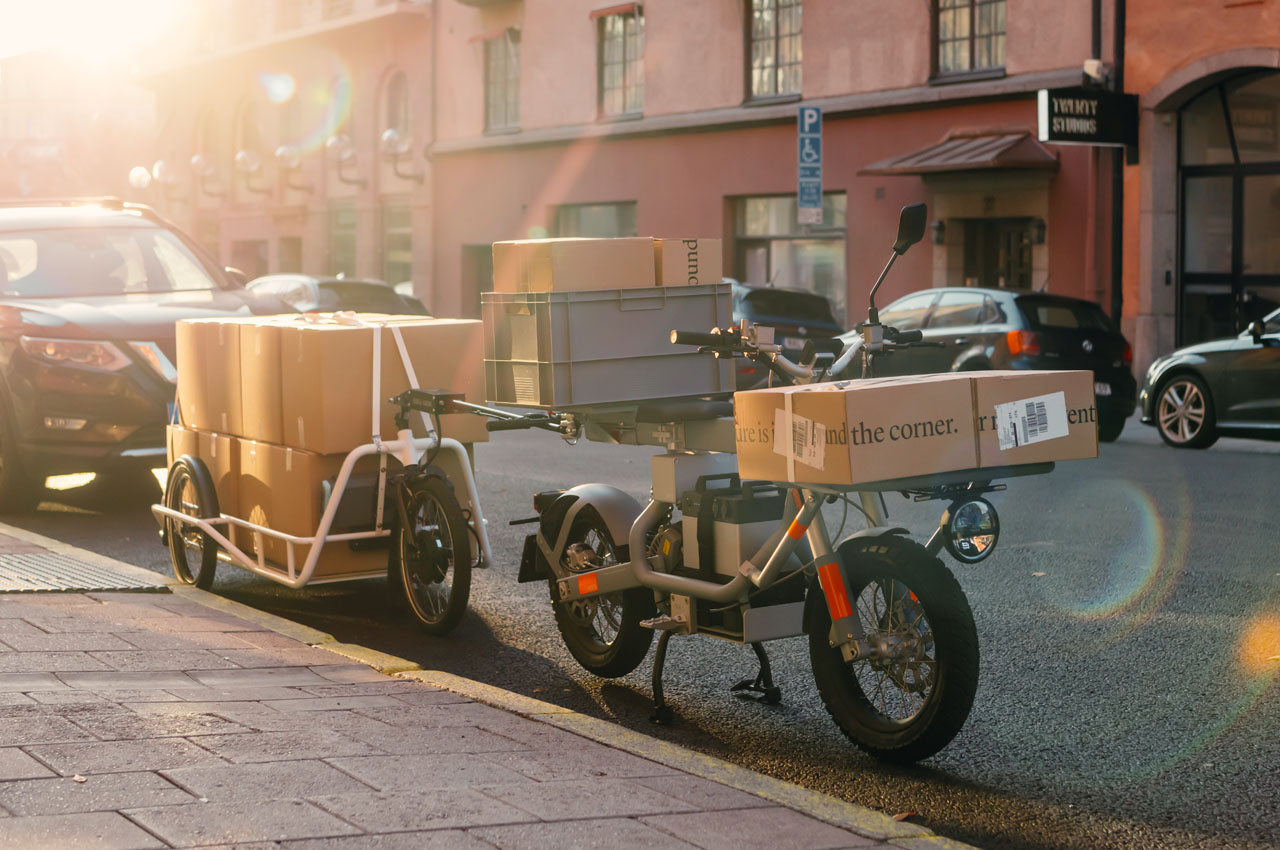 The :work series builds on the success of high-performance off-roader “”, modular utility bike “” and city commuter “Makka.” To function as a last-mile delivery vehicle, the line-up in the series has more power, efficiency, capacity to haul load, better-towing capability, and power electronic tools specific to the requirement. All this while making the design even more compact – narrow handlebars for easy maneuverability in traffic being one good example. Along with this CAKE offers a wide array of purpose-specific accessories to customize the bike in 19 different setups. 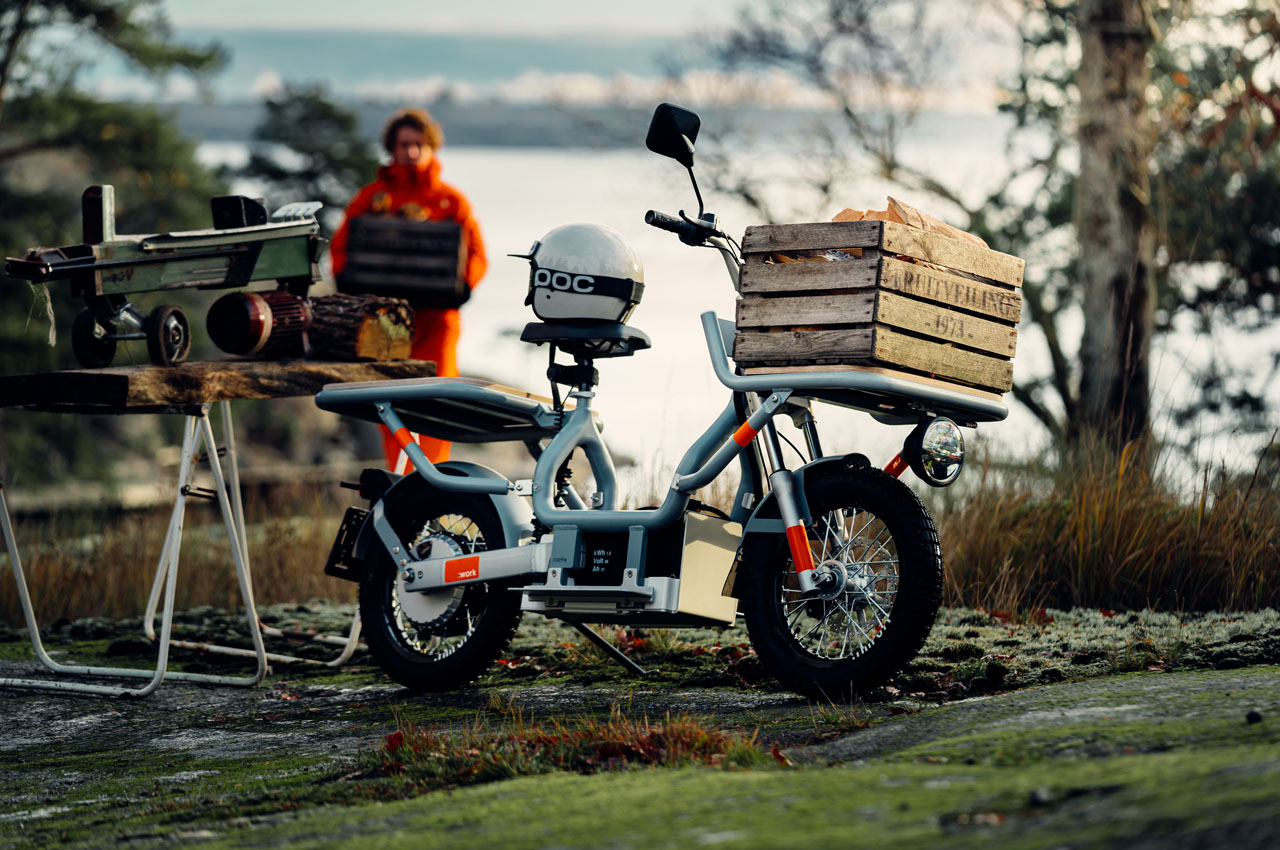 The most noticeable new configurations in this series include the Makka :work which is a nimble and robust electric moped capable of moving tools, equipment, or gear for short-haul transits and city food deliveries. CAKE has doubled the battery on this one and the tuned motor delivers more power. It will further come in two configurations one with a top speed of 45 km/h and the other optimized for range with a top speed of 25 km/h. 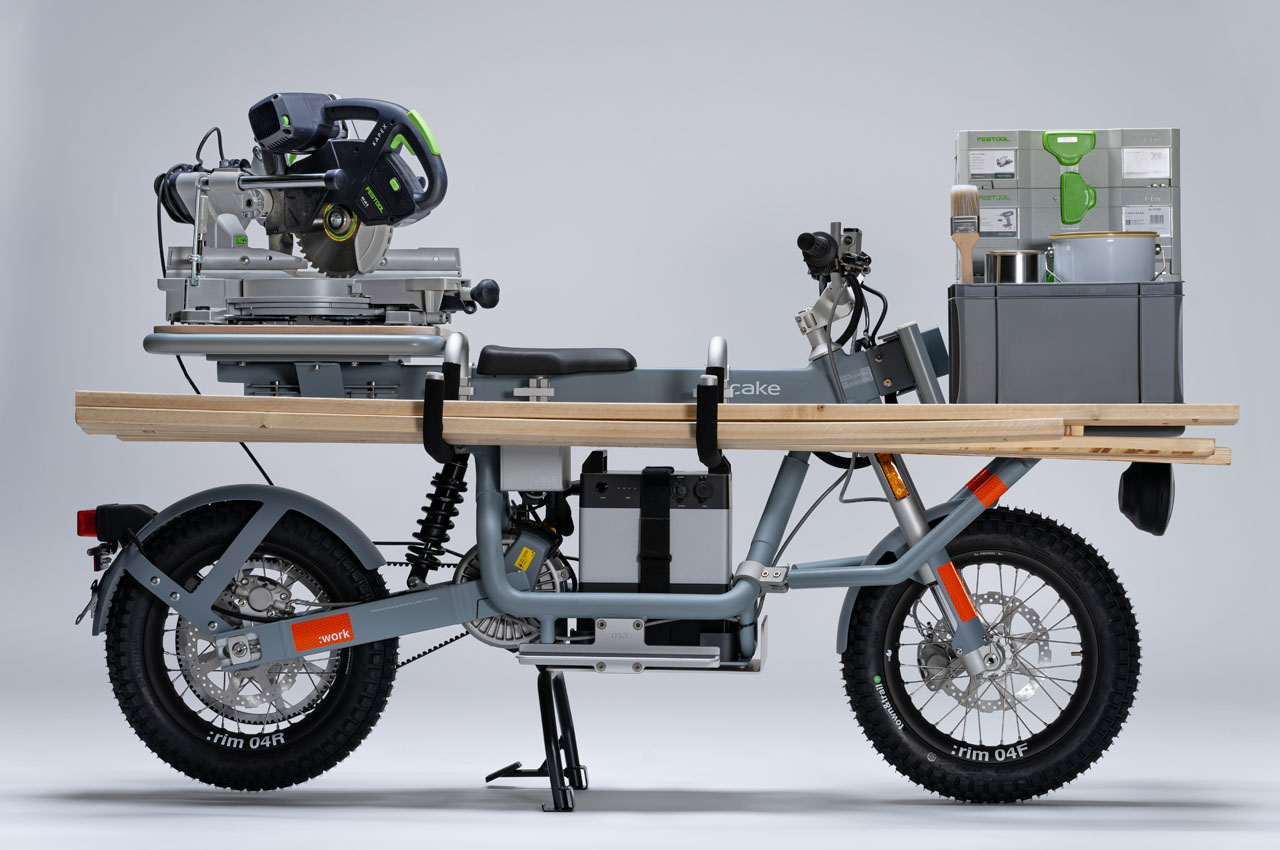 Then there is the Ösa :work which is a powerful workbench and towing truck in one. The unibar and clamp-on system are used to attach trailers, baskets or racks to carry a heavy load. Interestingly, the two-wheeler also doubles as a state-of-the-art power station since it has power outlets to charge up phones, laptops, or even welding machines. Compared to the original model, this one too gets increased motor power and added battery capacity for the longest range possible on such a two-wheeler. This one comes in three different models – the motorcycle version with a top speed of 90 km/h, the moped version having 45 km/h top speed, and the long-range ones with 25 km/h top speed. 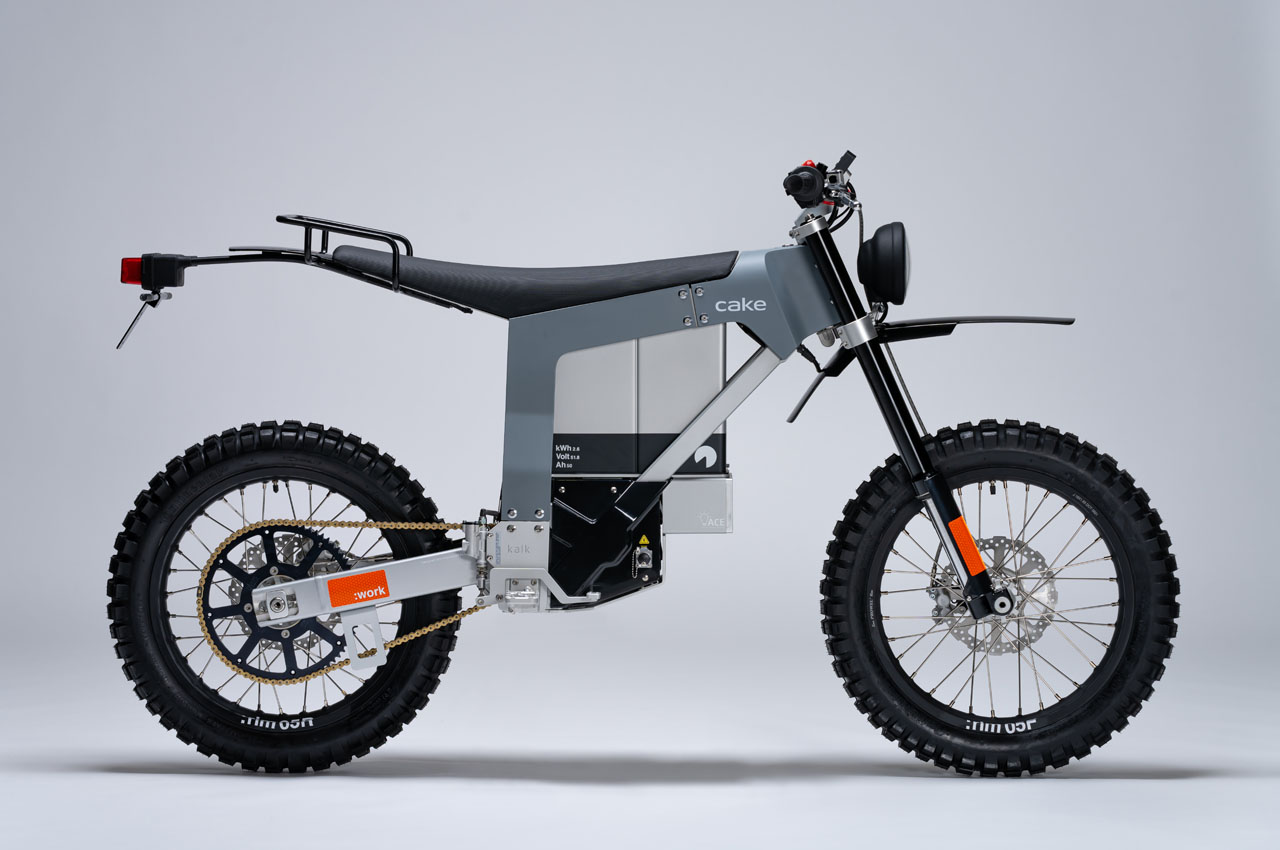 CAKE’s another :work series configuration is the Kalk :work which is basically tailored for off-roading and adventure seekers. It is made from lightweight and premium material for nimble performance, compactness and efficiency -attributed in part to the unique power-to-weight ratio. The two-wheeler is perfect for patrol missions in difficult terrain as it exhibits superior control and speed. This one gets wide tires and different riding modes – sans any clutch or gears. 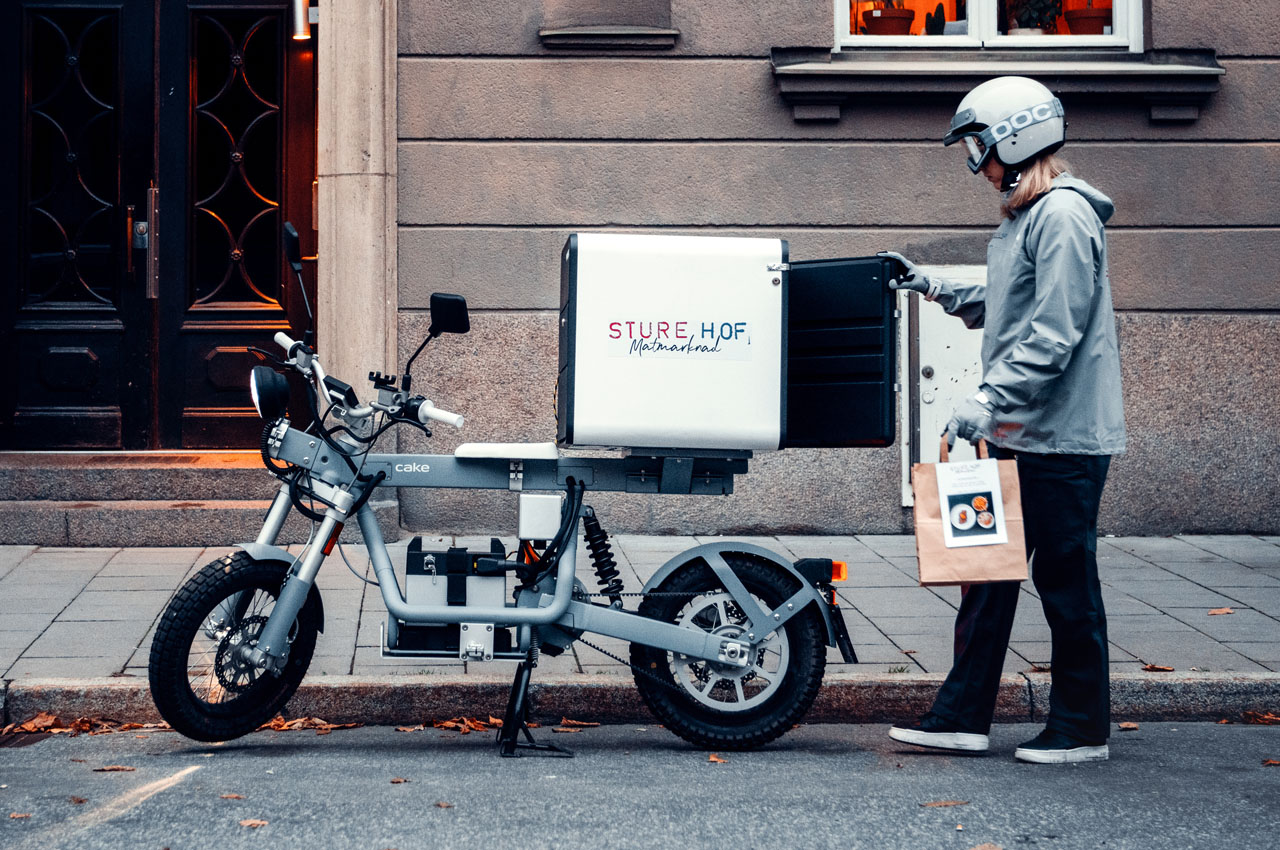 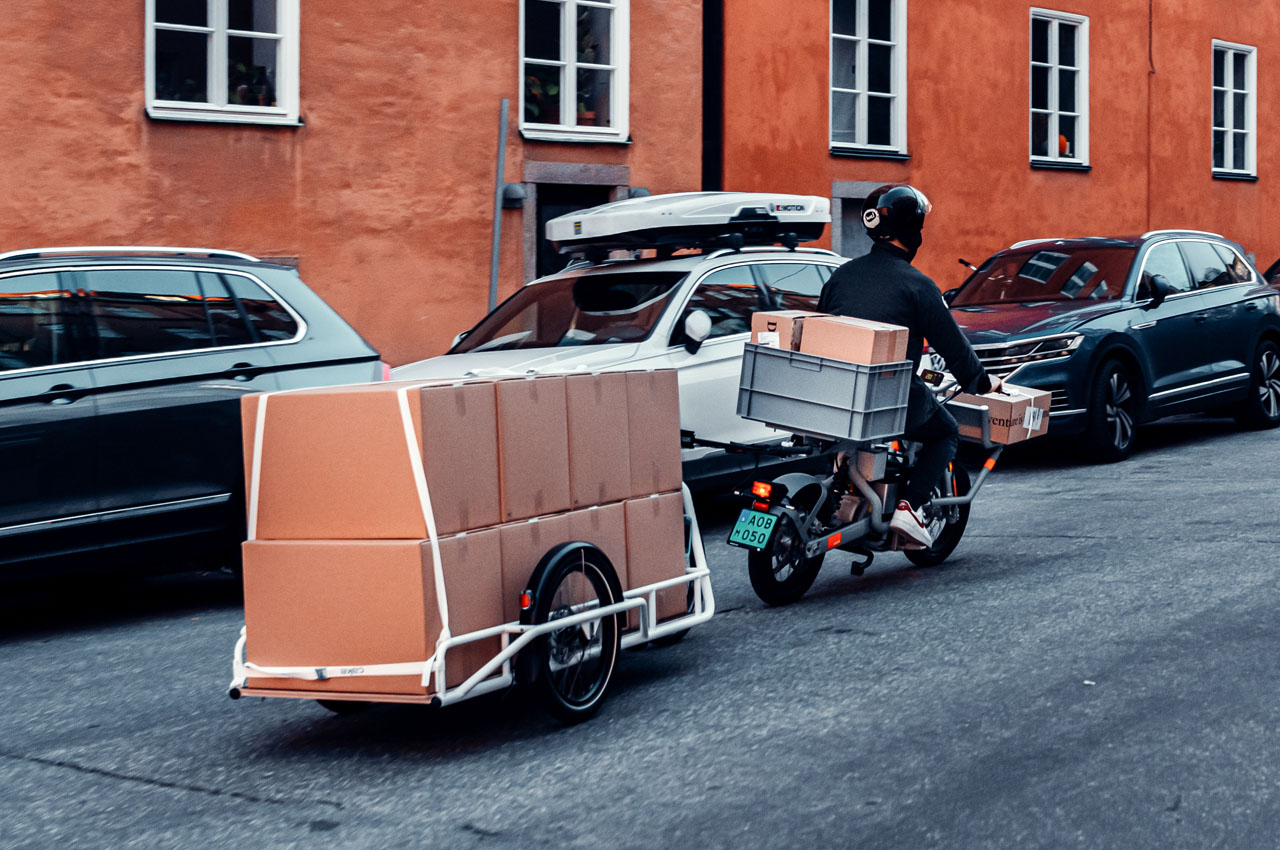 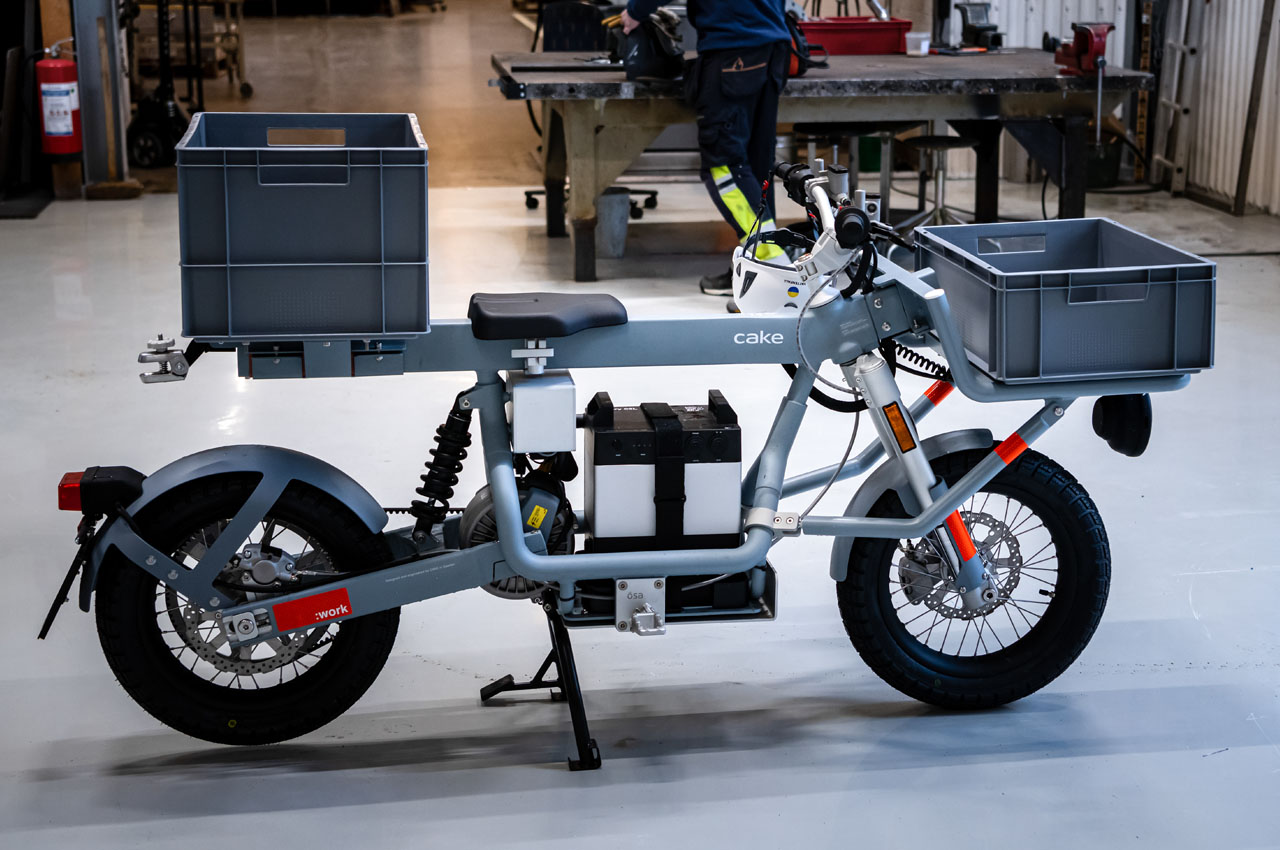 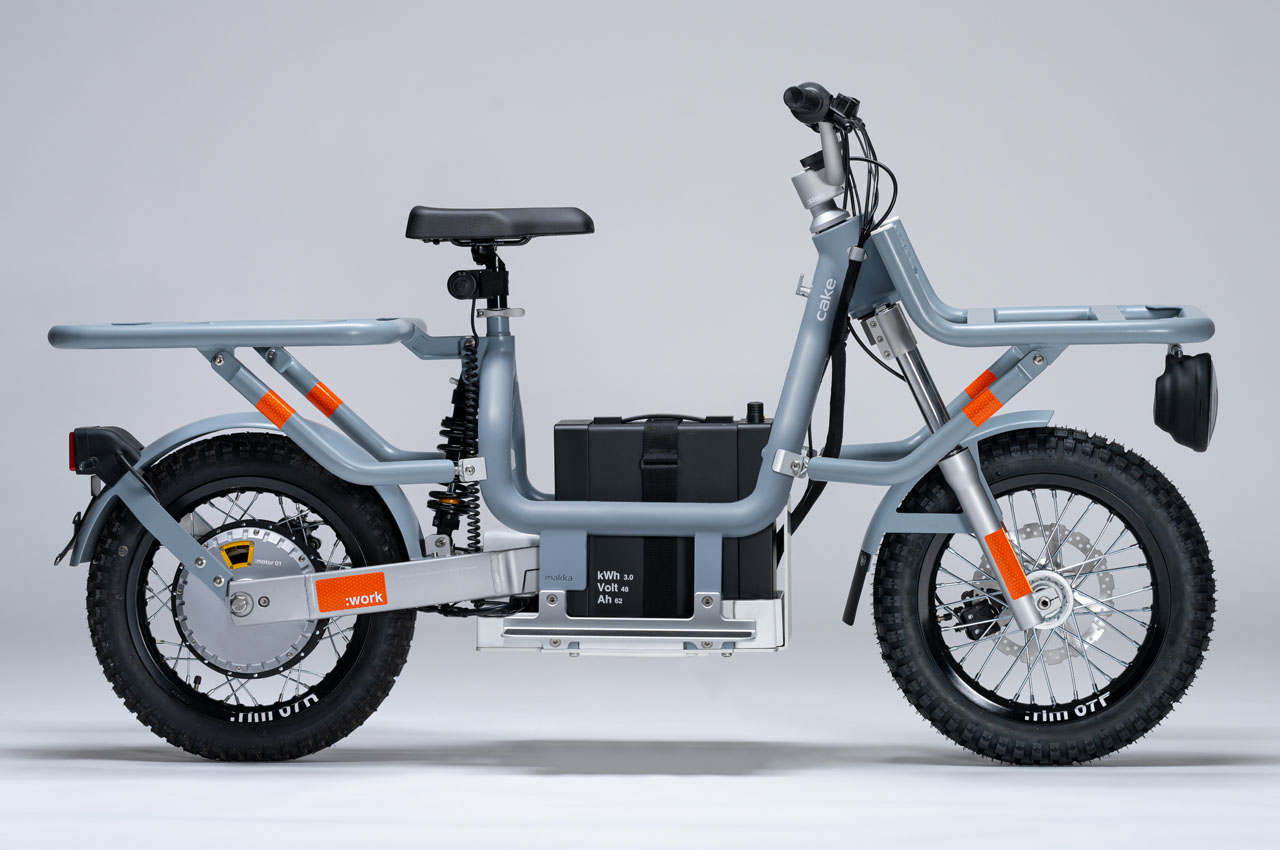 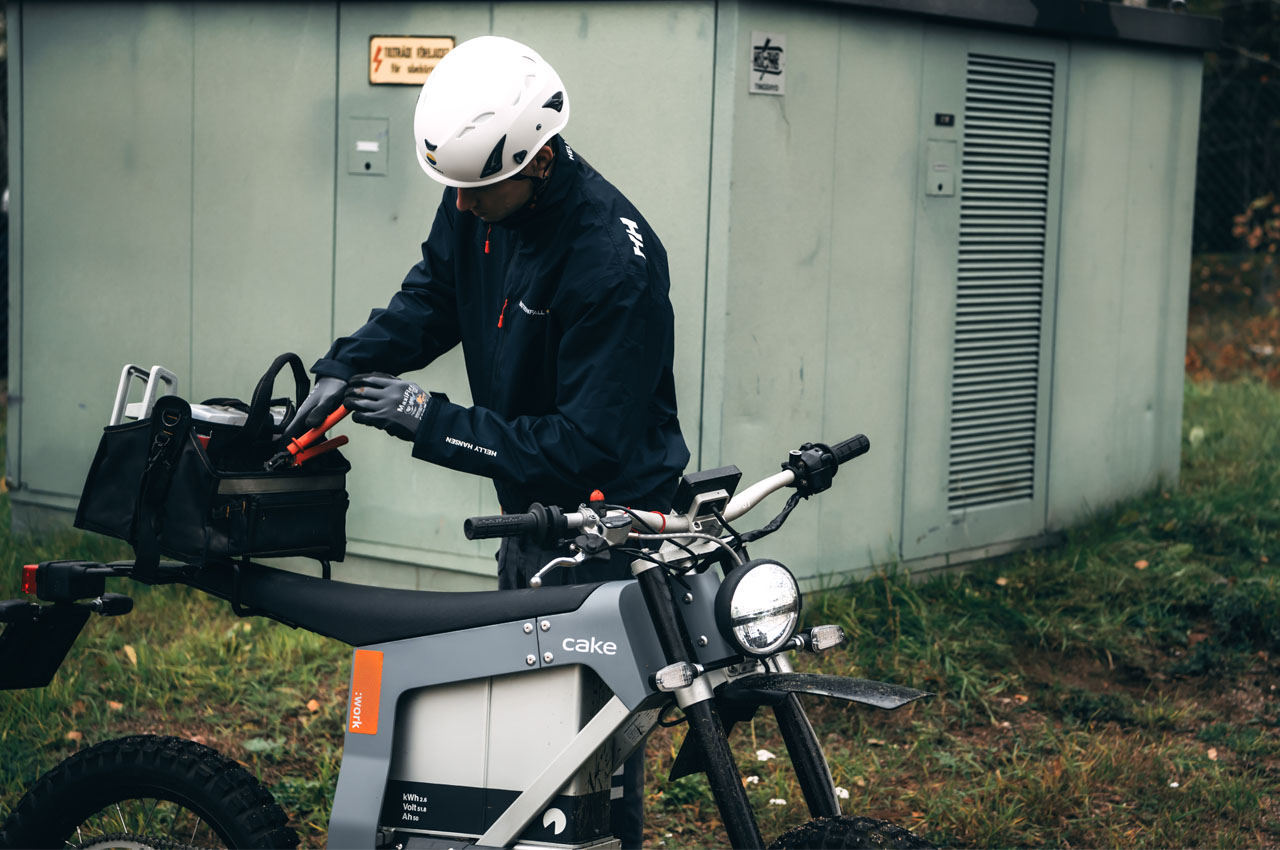 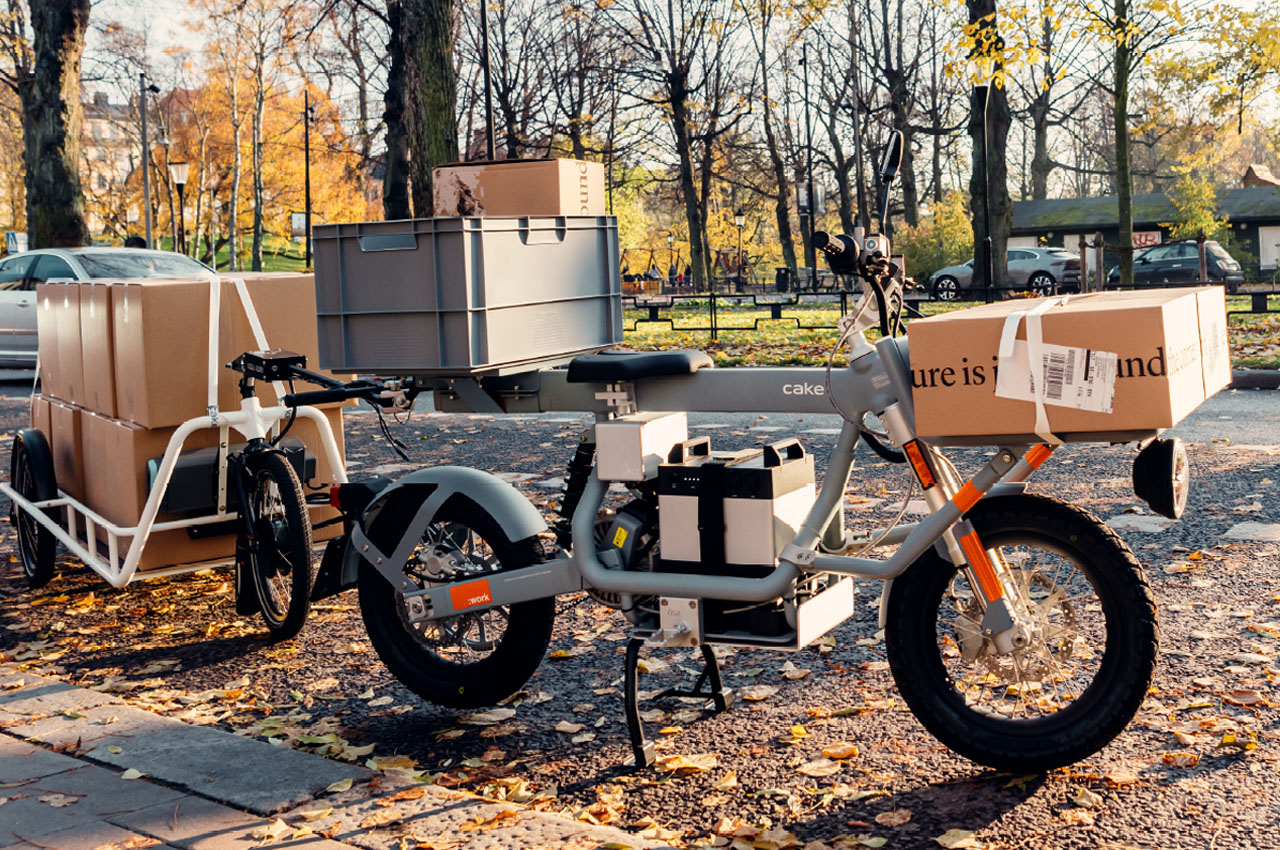