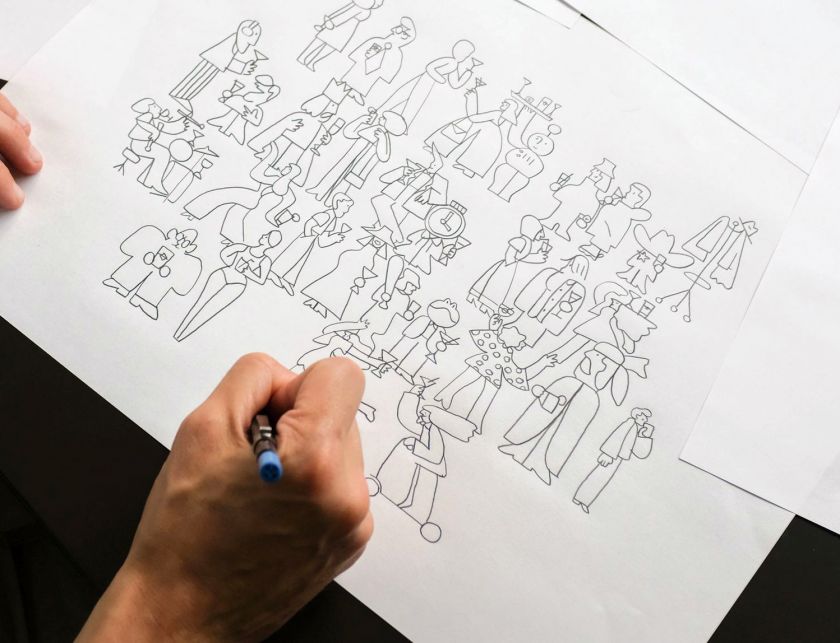 The directors of have transformed sketches leftover from an animation pitch into a minimalist and stylish short film called Clink Clink, which celebrates the boozy lifestyle we’re now able to enjoy once again.

Created by directors Nicolas Ménard, Jack Cunningham and James Graham, Clink Clink is a playful personal project that makes the use of animation and illustration assets which sadly didn’t make the light of day as originally intended.

Speaking to Creative Boom, the directors reveal that in the pre-pandemic times, they had pitched on an animation job for an alcohol brand. “In the world of animated commercials — like in live-action commercials — agencies ask directors to do a free pitch to win a job,” they explain. “The difference in animation is that you often have to do a lot of development work to prove that your drawing style or aesthetic is to the client’s taste. This can represent many days of work that might never see the light of day if the pitch is lost.”

Following a brief that asked them to evoke a nostalgic, party-loving world that referenced Romanian-American cartoonist Saul Steinberg, the directors teamed up and designed minimal black and white characters busily enjoying a cheeky drink or two. “We would individually sketch a bunch of characters at our desks, inspired by our own experiences of going out in London,” they explain.

“We would then gather around a table, analyse the various drawings, and select the most playful, observed, or ridiculous ones. James would then retrace all the drawings using a light-box to ensure they were all unified under a single stroke.”

Sadly though, the work wasn’t commissioned, and it ended up gathering dust on a hard drive. And while the directors admit that incomplete commercial work can be hard to fit into a personal piece, especially if the aesthetic or subject matter doesn’t necessarily align with their overall vision, this wasn’t to be the case with Clink Clink.

“Although the theme of a boozy night isn’t something we would naturally be drawn to for a short film — the style and playfulness of the characters were close enough to our interests that we could easily strip them out of their original commercial purpose.

Taking advantage of the lags which sometimes occur during productions, they turned their attention to the 40 characters they had sitting there who were begging to be brought to life. “We packaged our numerous characters in pairs, and whenever an animator freed up, we would give them free rein to make them dance, chat, or drink. The only limitation was to keep their animation to a 4 seconds loop.

“Animators are not dissimilar to actors; they infuse their work with their own charm and personality. By giving them space to improvise — a rare luxury in commercial animation — they come up with great, unexpected results.”

When it came to picking the backing tune for the video, there was only one choice. “Sexy Dance by Masayoshi Takanaka had been a regular in circulation on our studio playlist,” the directors explain. “It’s safe to say we were obsessed with its mix of class and groove. The ideal party track of the ’70s, and it lined up perfectly with the decade of inspiration in which we drew from for our characters.”

Despite settling on the track, there was still a rights issue to contend with. And with Takanaka having somewhat of an obscure and mysterious web presence, the outlook looked bleak. “Luckily for us, Nexus has Maison Hanko, a Japanese arm of the studio. Creative coordinator Aya Kobayashi stepped in, and after many dead ends, she was able to ask permission from Takanaka himself! Hearing that Takanaka loved the animation and gave his blessing was a real career highlight.”

As well as resulting in a beautiful animation, Clink Clink taught the team that they can produce a huge amount of appealing characters rather effectively. “So, if you are in need of a fully fresh animated campaign, give us a call.”