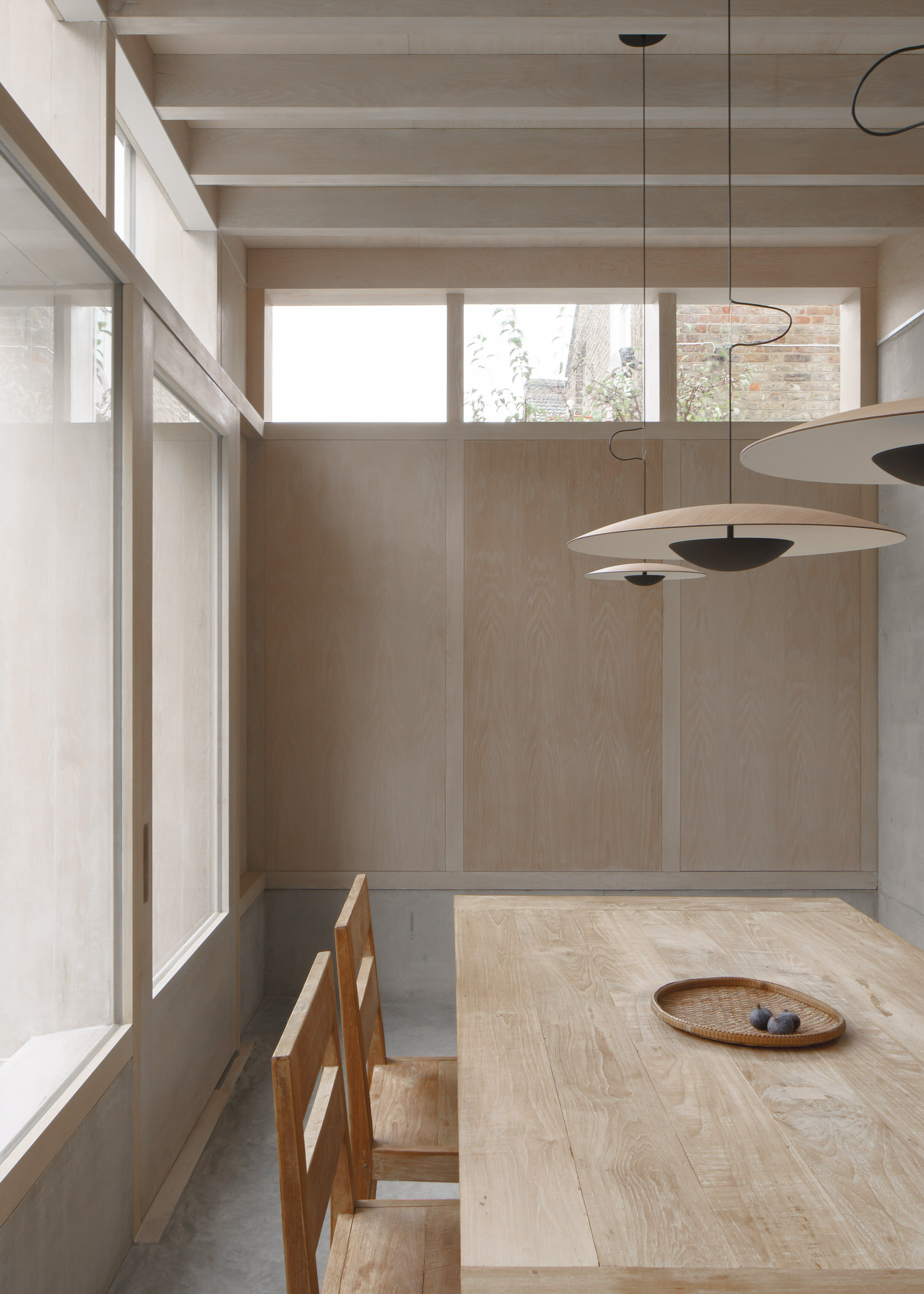 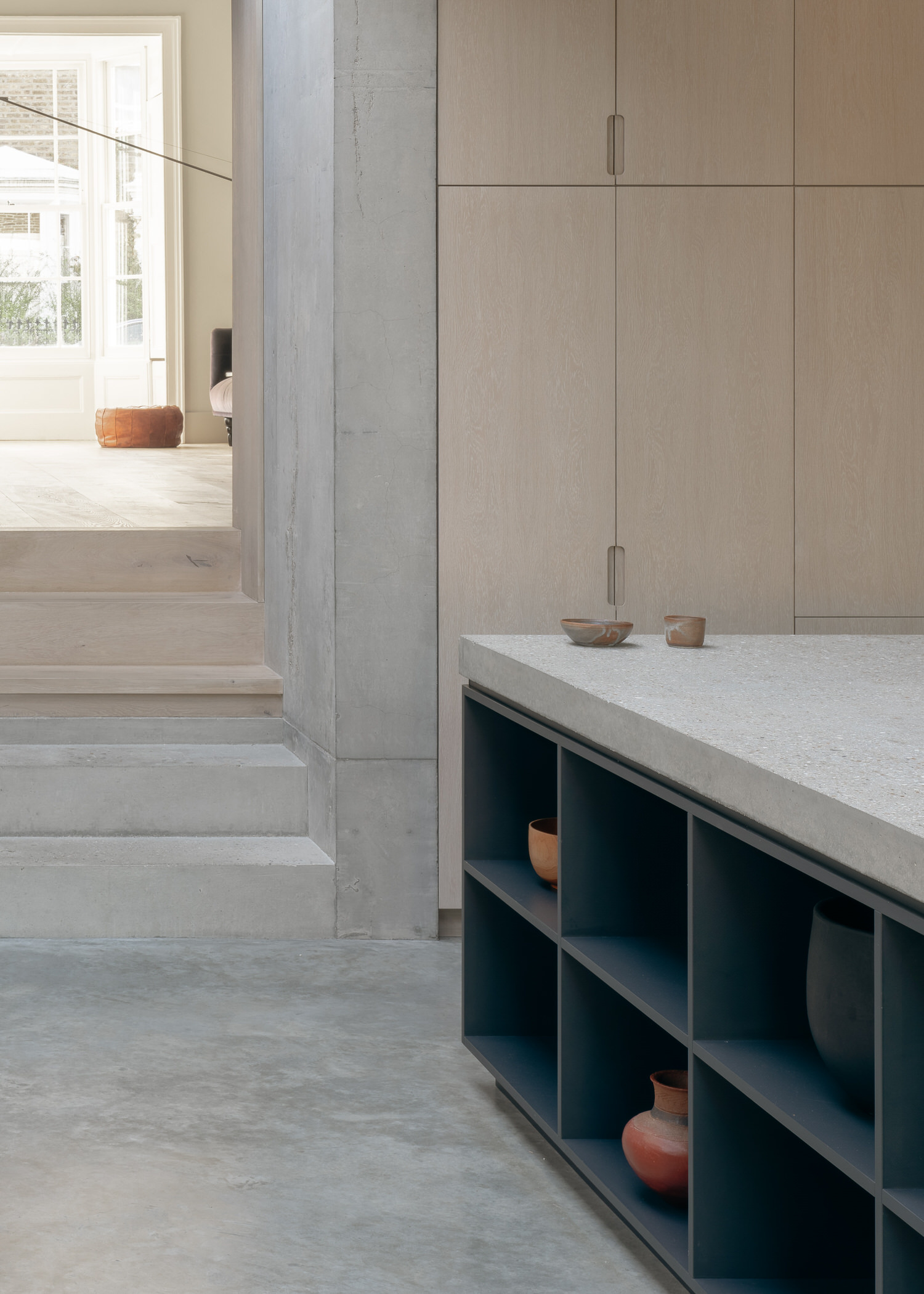 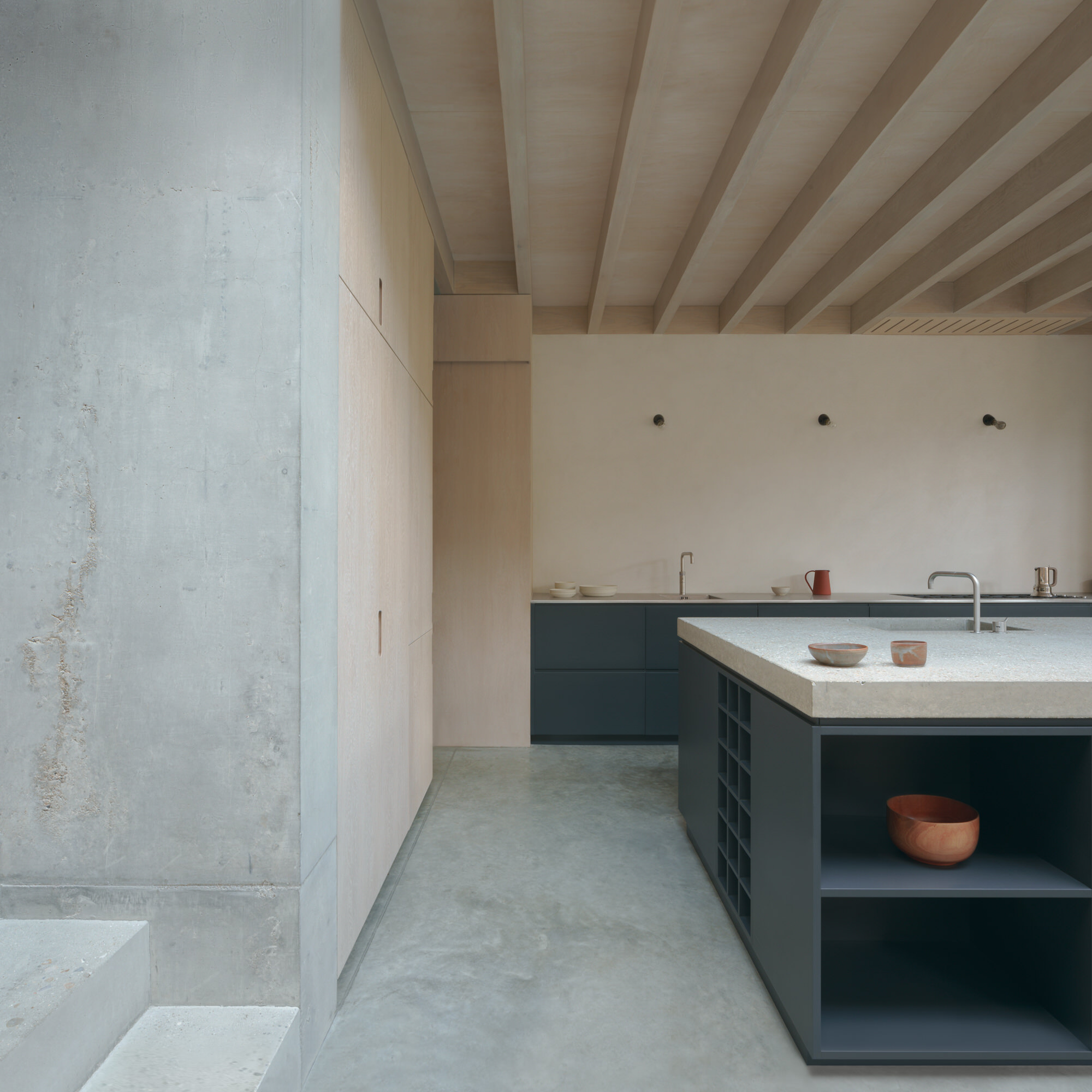 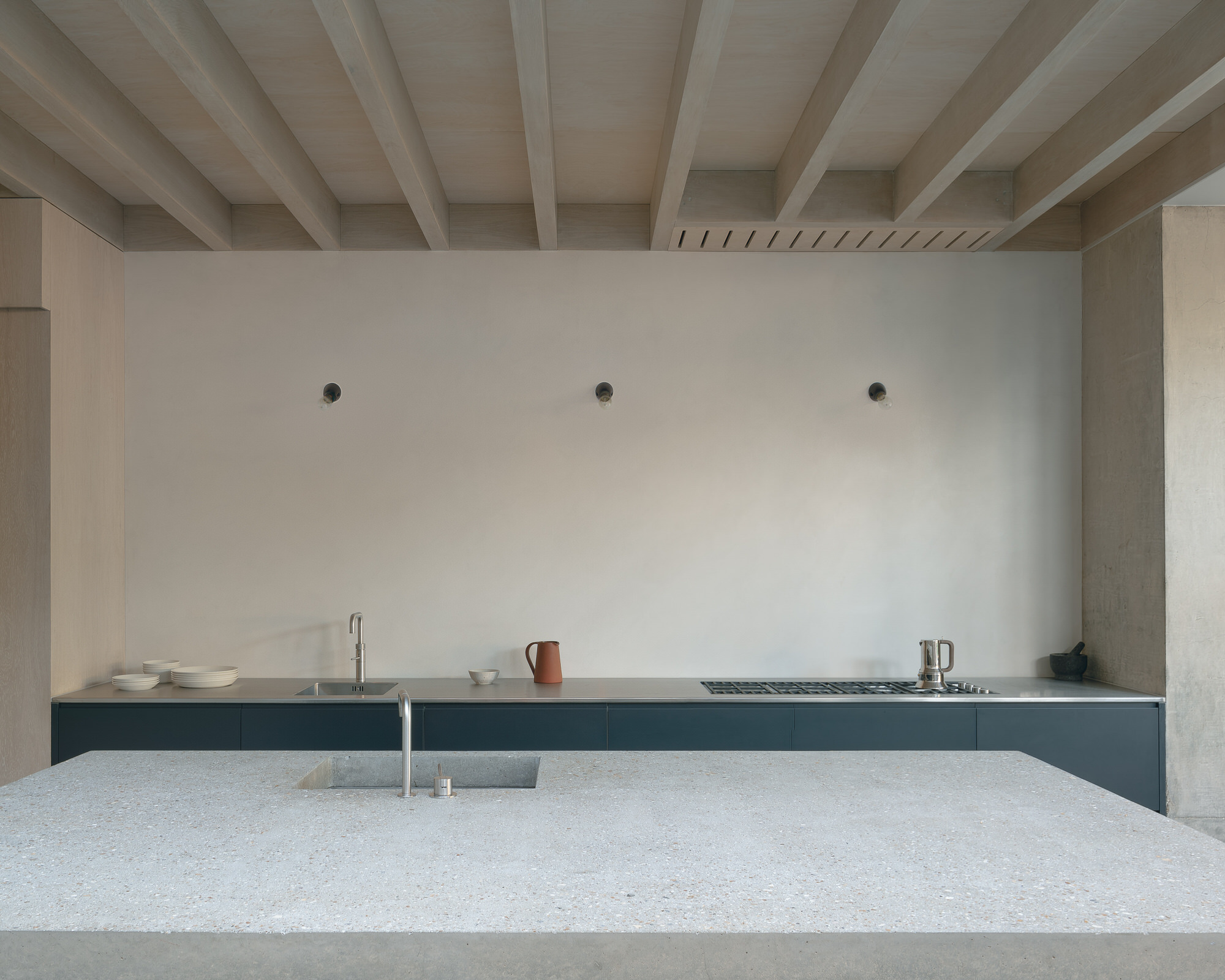 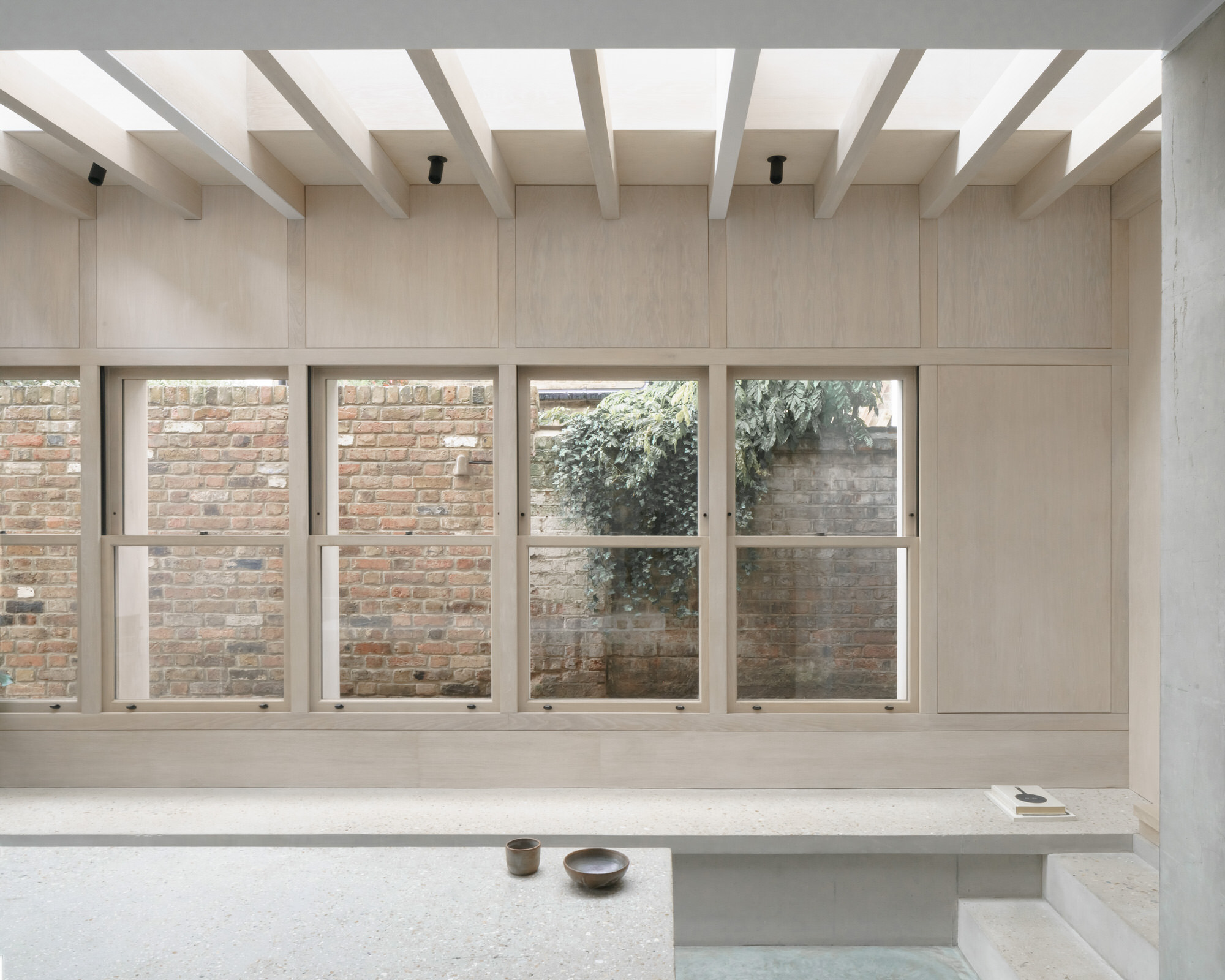 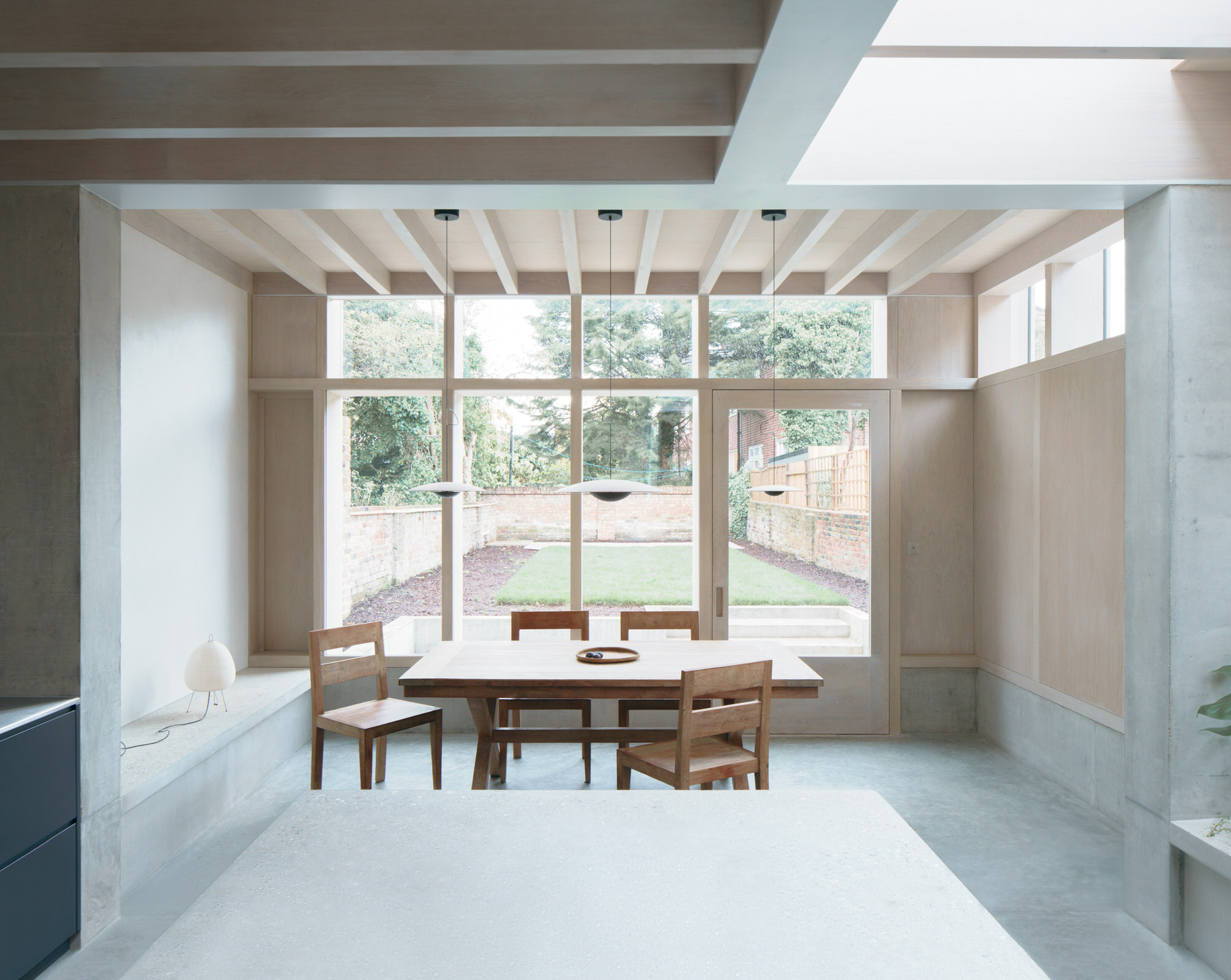 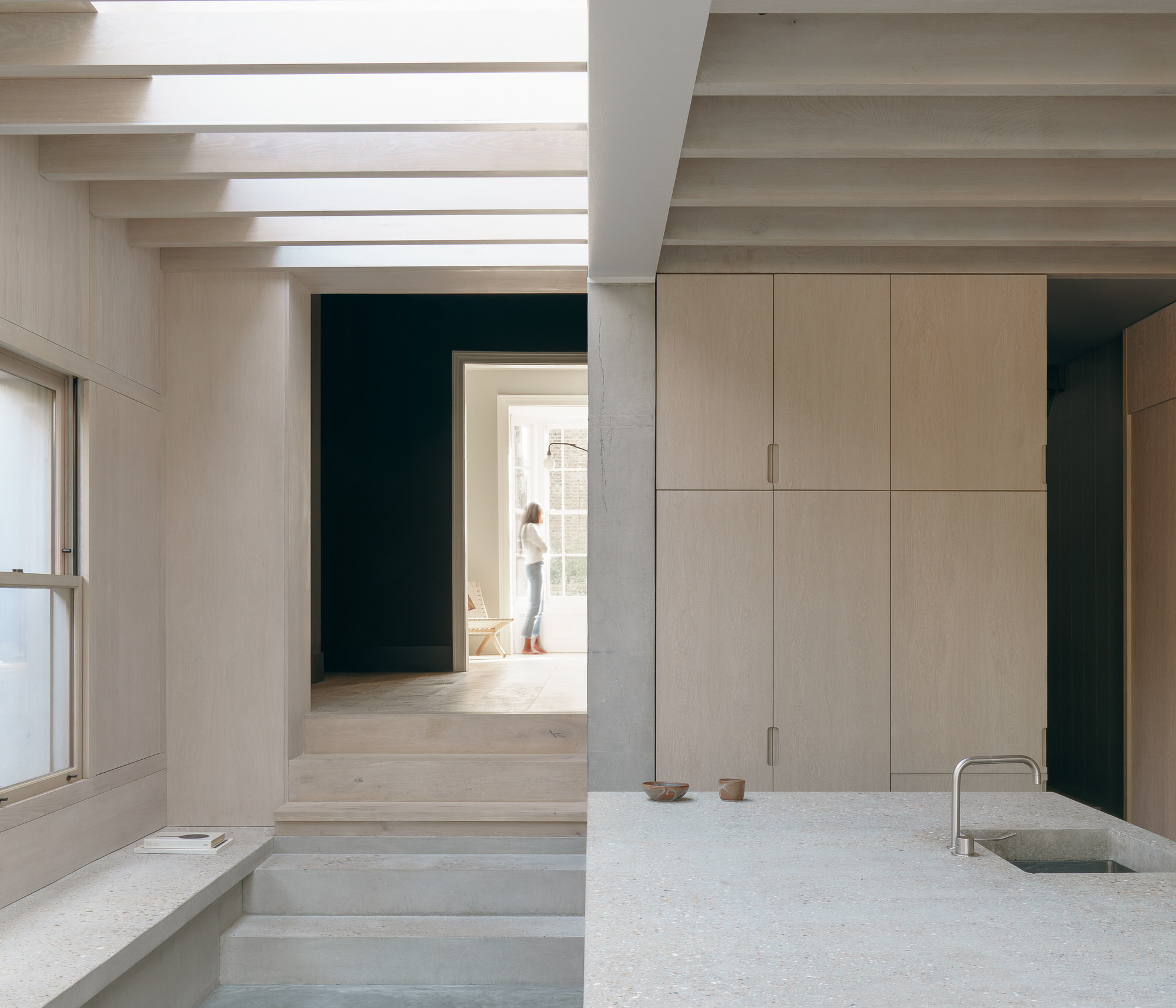 Start your morning by waking up to a view of light slithering down into the kitchen, softening the bespoke furniture to create an ethereal glow while silhouette of the dancing smoke as it billows and weaves out of your timely brewed tea inside the welcoming terrazzo kitchen. This is a scene I’d like to imagine myself inside ’s Concrete Plinth House, an extension and renovation of a young couple’s home in Hackney, East . An appearance of a glasshouse, but not really a glasshouse – this home sports a classy aesthetic that tastefully and smartly swerves the former claustrophobic and disjointed atmosphere into a minimalist brutalist-inspired home with a touch of attitude.

The project is named after the concrete addition introduced to the client’s existing Victorian House. The two-storey 157-square-metre home formerly held a northern facing kitchen that was rather discouraging for its bleak and oppressive character.

Desiring a space to be refreshed to be optimal for entertainment and gathering (and for occasional arts evenings), the architects created a new threshold by sinking the two steps lower with a concrete basin. Such a large act allowed them to return a comfortable height for the hearth, in which the previous one was rather tight and low. The concrete basin – inspired by the clients’ love for concrete served as a boundary and multipurpose joinery of a seat, low bench, stage, or step stool used when opening the bordering oak sash windows – an homage to the Victorian terrace architecture. The language of concrete love is certainly evident throughout the space, with concrete columns and staircases melting nicely into the flooring. The coolness is warmed by the timber cabinetry doors sleekly flushed to the walls, which smartly conceals a door towards a hidden cellar. 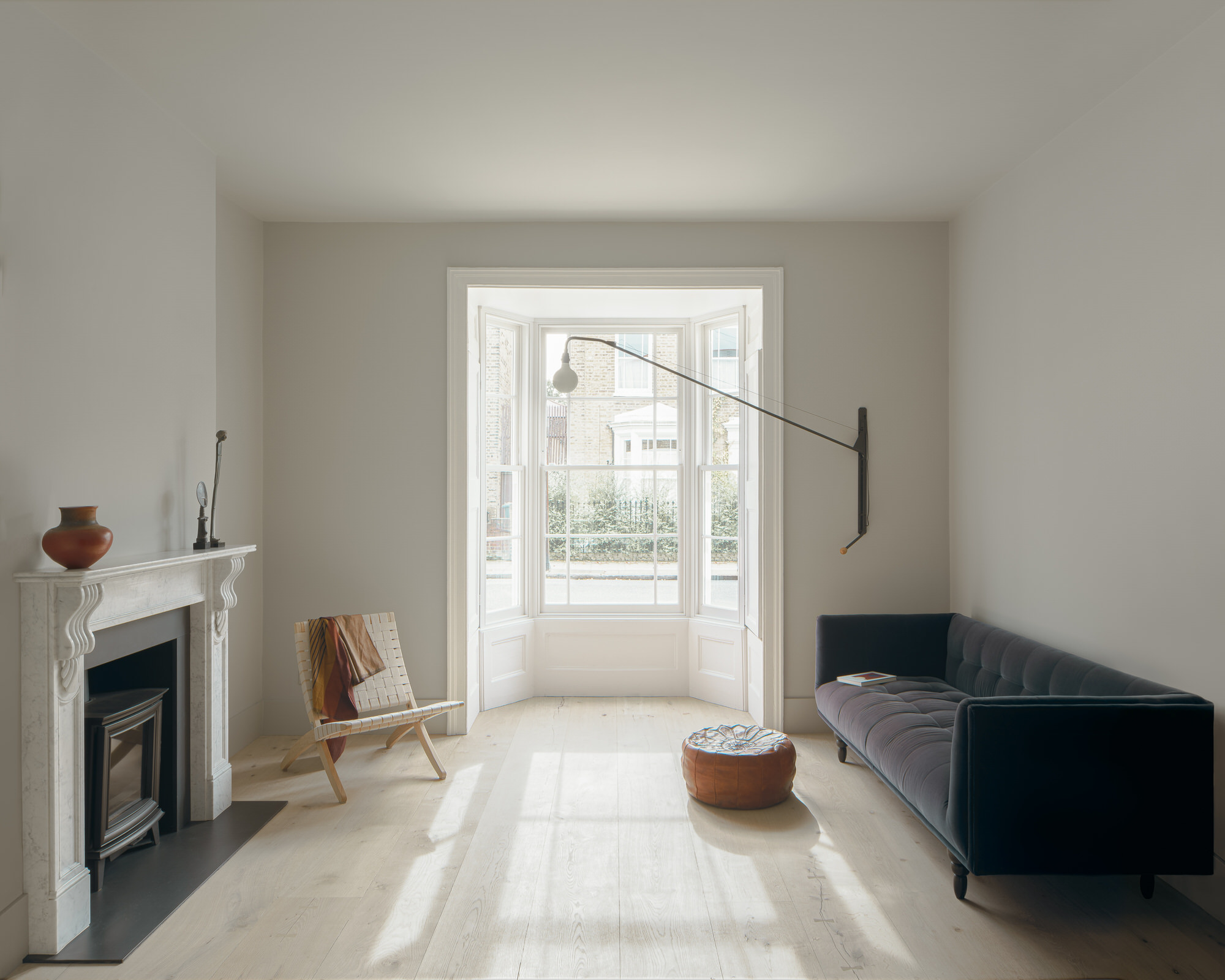 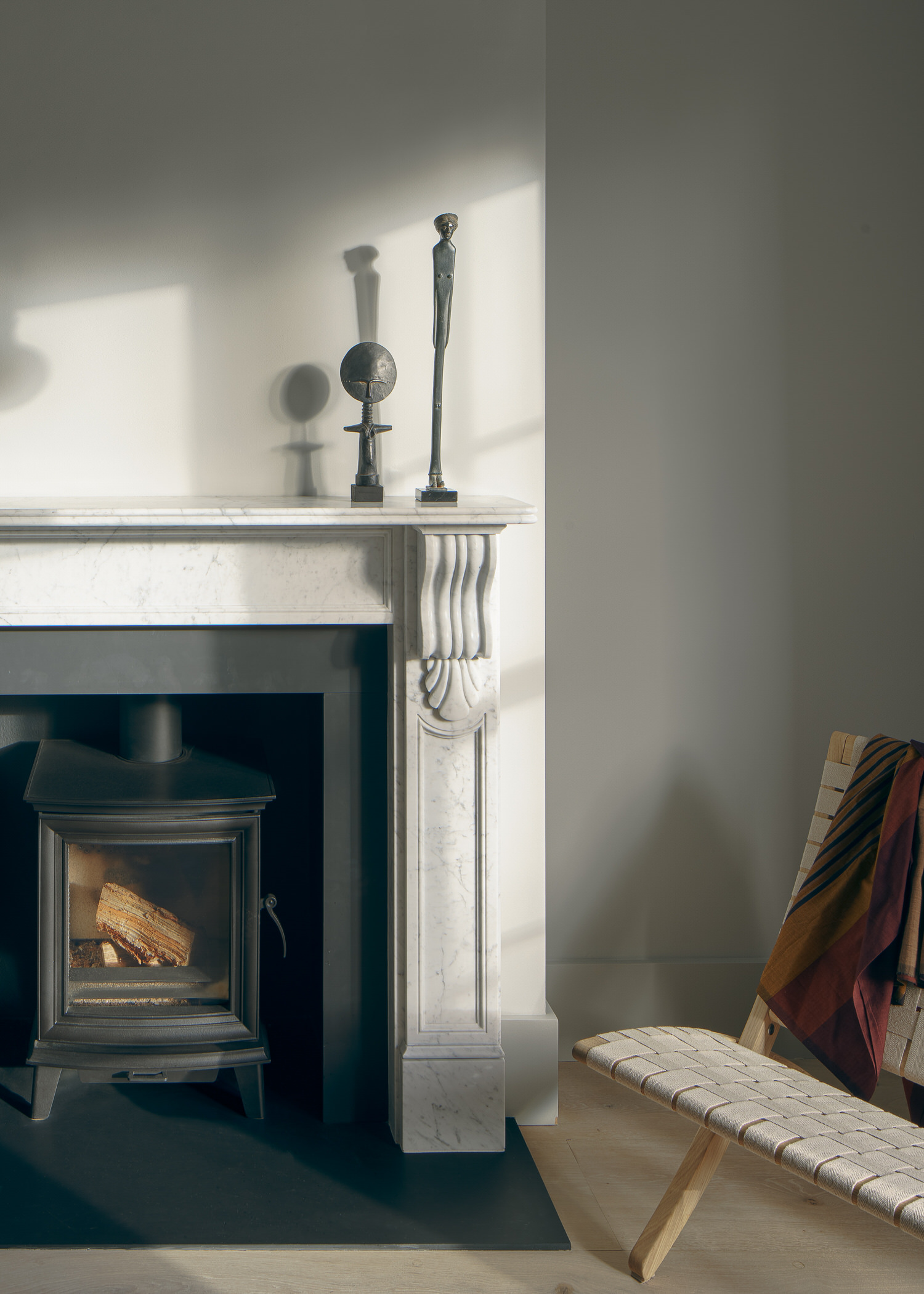 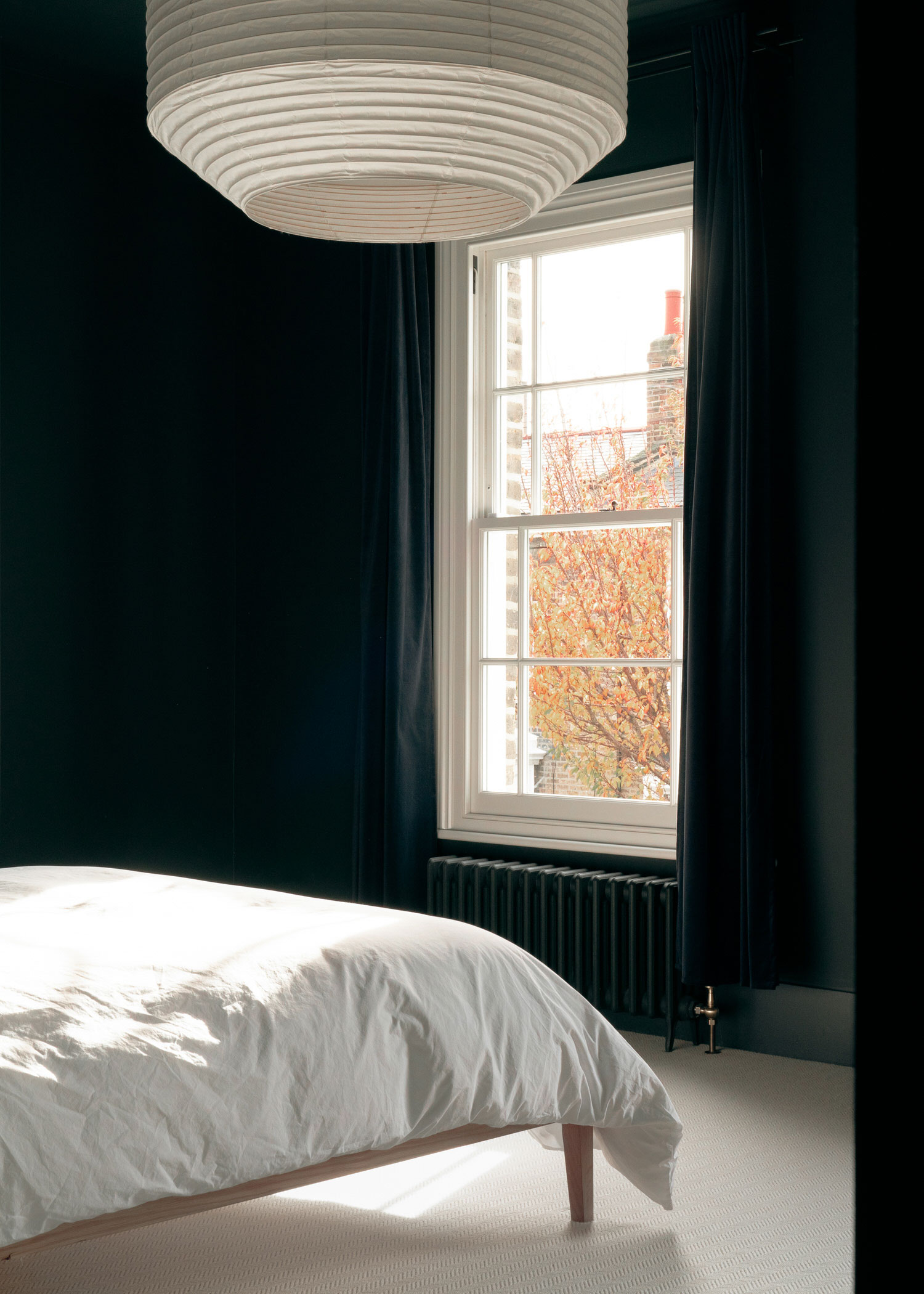 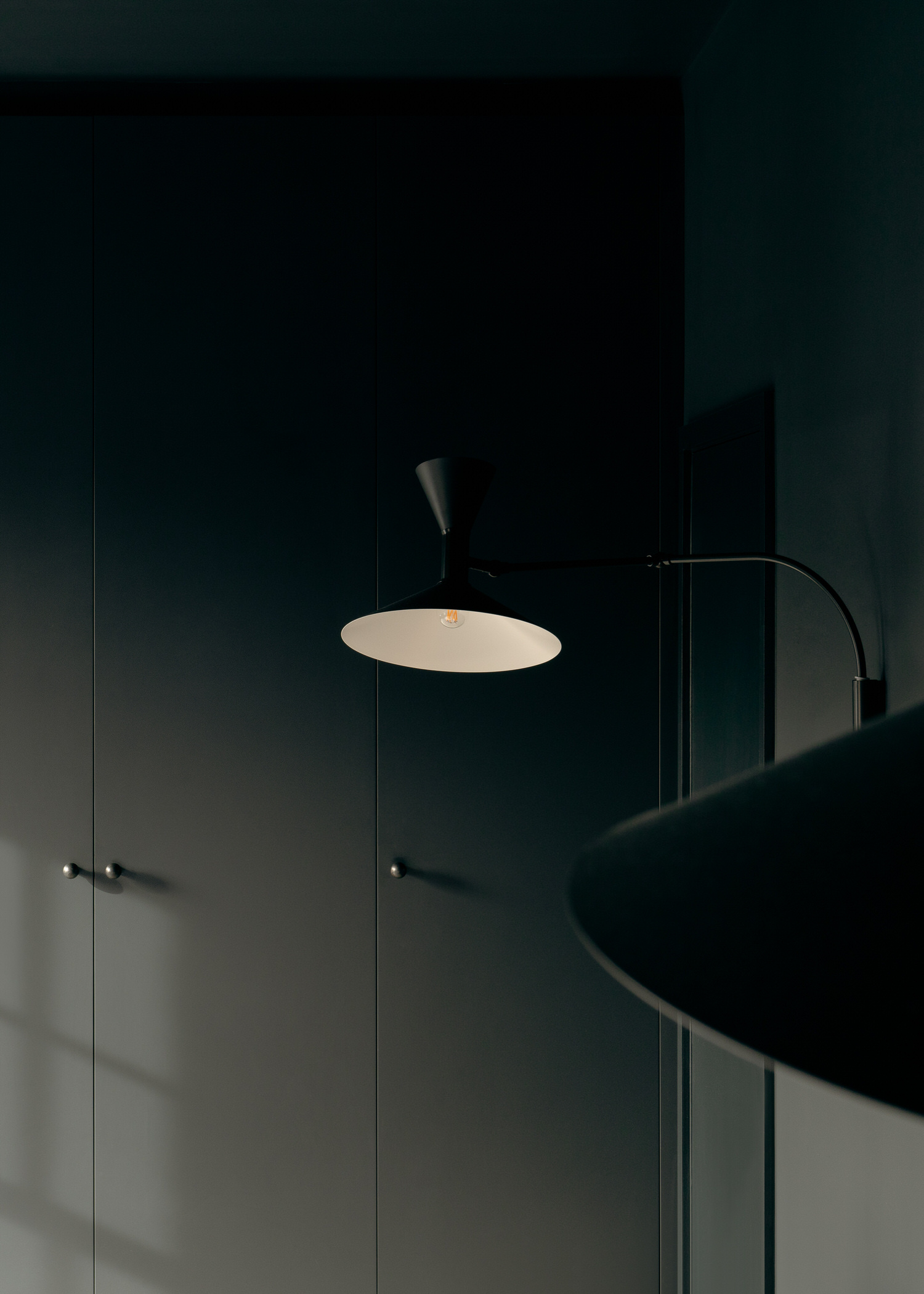 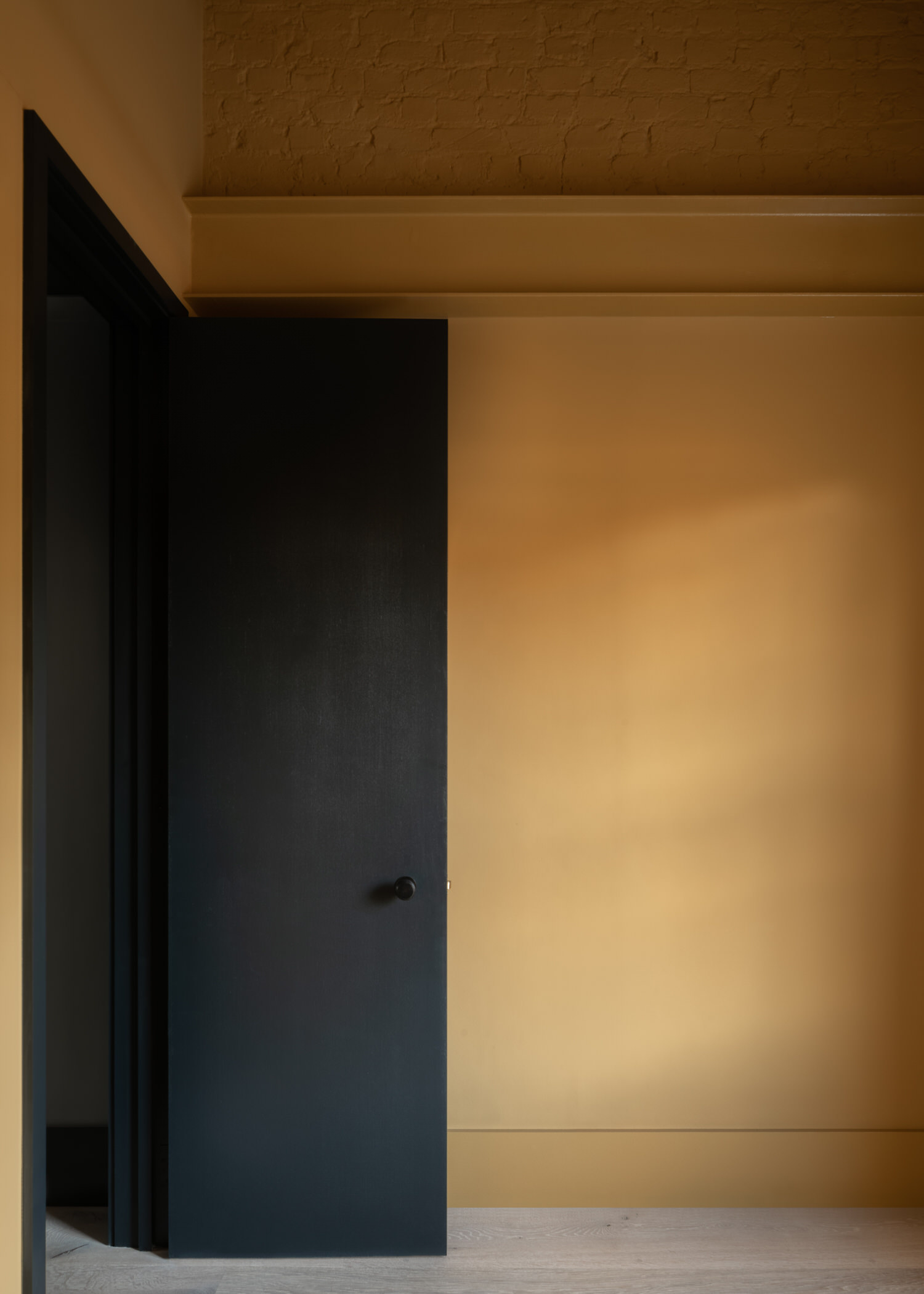 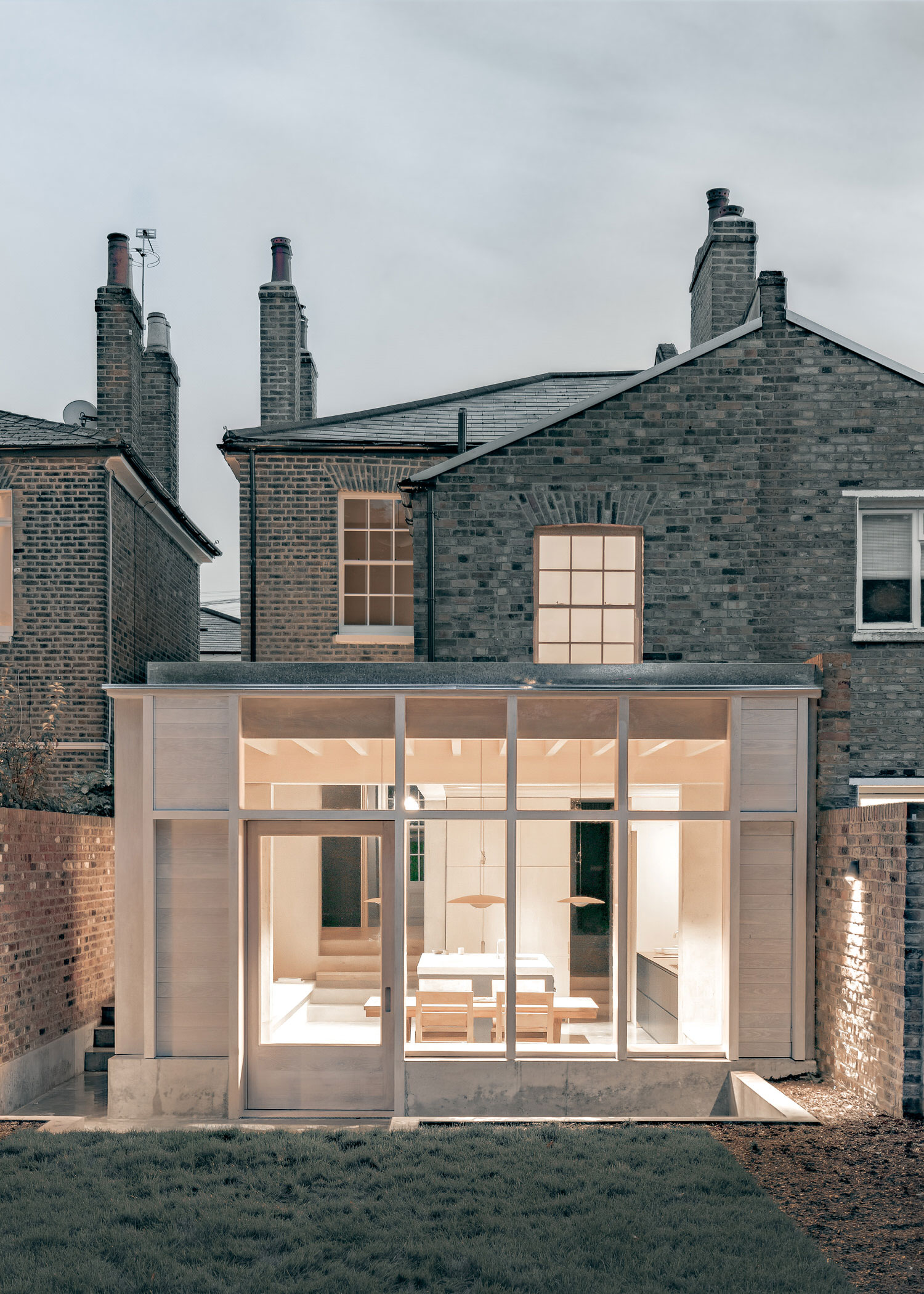 The reorganisation of the kitchen eventually led to lighter adjustments to the other spaces within the house. The ground floor, where rooms are rather separate from each other, are rearranged to have long sightlines towards the kitchen and eventually the backyard. Above, light touches of new joinery are added into the bedrooms. The former bathroom that once had a window that looked over next door is moved to the ceiling, letting light glitter upon the soot-peppered terrazzo wall tiles.

Colour palette wise, there’s something nice and daring of the selection of muted cool olives and navy tones communicating a sense of certainty and timelessness. Paired with rectilinear and sharp edges of the furniture – rather fitting to match the concrete slab, each room has a colour-blocked palette pulled from the ash grey brick façade.

A bit of history, a zest of contemporary flair and a balance and love for self-assurance, Concrete Plinth House is a concoction that I truly envy, and one I wouldn’t mind living in as well.