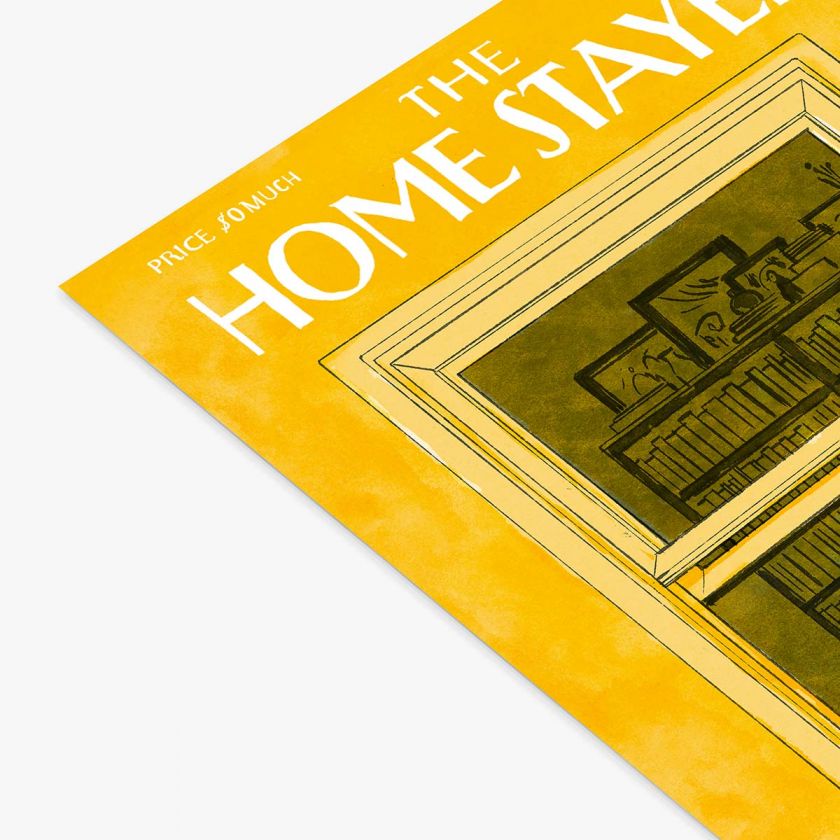 The Home Stayer by Luis Mendo

Here at Creative Boom, we’ve spent the last 12 and a half years supporting independent creatives. But we want to do more. And so today, we’re proudly launching our new , selling exclusive prints by leading artists and designers.

To kick things off, we’ve collaborated with top illustrators , , , Rob Lowe aka , and who’ve each created one-of-a-kind prints that will available for seven days only.

These will only be sold in the Creative Boom Shop and never elsewhere – guaranteed. In other words, you won’t find these exclusive designs anywhere else. And once they’re gone, they’re gone forever.

In future, we’ll be selling exclusive works by the likes of , and . But again, these will be limited-time only offers, so make sure you don’t miss out. Sign up to the , and we’ll let you know every time a new print is about to drop.

What’s more, each artwork is printed in the UK and Germany on the finest art papers, using the latest print technology. And we’re proud to say that all postage, cloud storage, energy and travel is 100% carbon neutral, as we’ve partnered with the top-rated printer in Europe with the highest level of customer satisfaction.

Our shop builds on Creative Boom’s mission: to celebrate, inspire and support the creative community, one we’ve championed since 2009. And in that light, we share half of all profits with those we collaborate with and donate 10% of our own portion to , the UK’s leading charity empowering lives through the creative arts.

Read on to find more about our first four prints to go on sale in our shop and the people and stories behind them. Plus what we have in store next.

Celebrated illustrator Luis Mendo began a personal project during the pandemic, creating a series of covers for a fictional magazine titled The Home Stayer. His beautiful artwork reminds us of a time when we stayed home to save lives. It also pays homage to the inspiring covers of The New Yorker.

Luis created this exclusive, one-off piece for the Creative Boom Shop. “It was my way of saying that we were all living in the same city, called Home,” Luis explains. Describing his style as “positive, honest, human-centred and always trying to create atmospheres relatable to the viewer”, he hopes his print for Creative Boom will inspire everyone to enjoy their time at home.

“My wish is that it will make people empathise with other humans,” he adds. “That if people buy the print and hang it on their wall, it will warm their heart every time they see it.”

You have until midnight on Sunday 21 November 2021 to buy this very special A3 print. 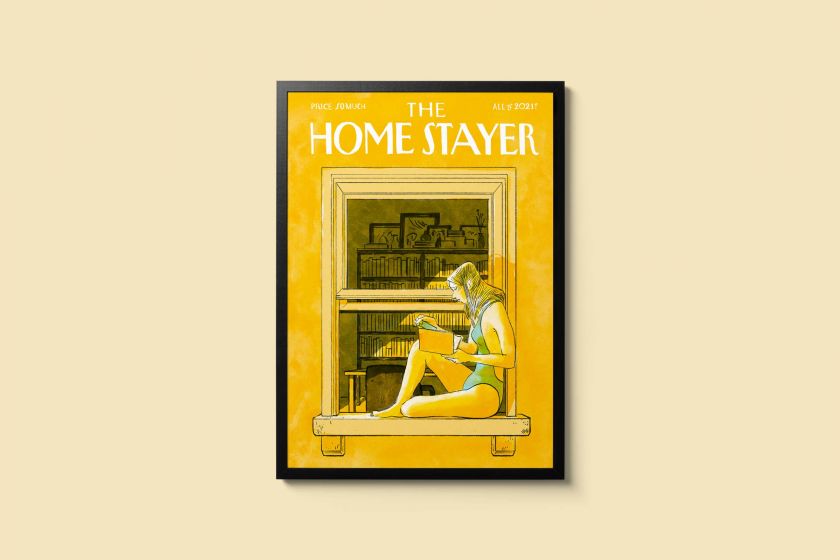 The Home Stayer by Luis Mendo

Haley Tippmann is an American illustrator from Rochester, New York, who currently lives and works in Germany. Her style focuses on people, places and objects found around the home, often with a focus on the “mundane” aspects of our lives. Her work evokes feelings of calm through the comfortingly familiar.

For the Creative Boom Shop, Haley has created a bespoke artwork titled Anniversary: an exclusive still life of objects in her studio and apartment that have meaning to her. The piece is about marking milestones. “This year was my 10th wedding anniversary, and around the time I got married, I also started illustrating on the iPad,” she explains. “I hope other people can connect to ‘Anniversary’; that one or more of the objects reminds them of a pleasant memory.”

Anniversary will go on sale for seven days only, from Monday 22 November, ending at midnight on Sunday 28 November 2021. 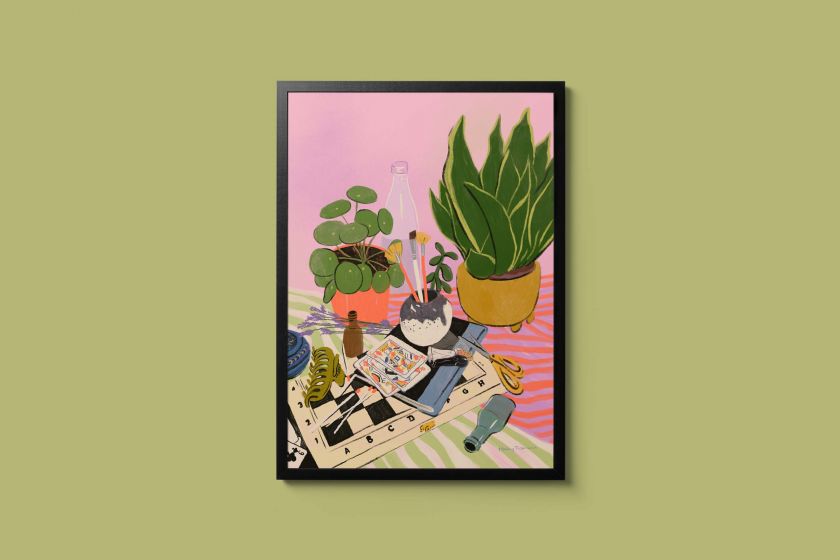 Born and raised in the UK with Sri Lankan heritage, Murugiah is an award-winning artist and designer based in London. Describing his style as “surreal, joyful and loud at all times and unapologetic, filtered through a South Asian impression”, he uses bright and bold colours along with detailed compositions to bring us art that’s psychedelic, explosive and out of this world.

Exclusively for Creative Boom, Murugiah has created ‘Still’, an artwork based on the theme of self-reflection and stillness. It features a character called MURU, who Murugiah says is “taking some time out of his busy day to experience this still life while also taking an opportunity to reflect on his own stillness in the busy world he lives in.”

Murugiah hopes that on seeing the artwork, “people will feel the need to self-reflect on allowing themselves time to be still, time to wander, time to discover the gigantic still life to marvel at in their own lives.” Still by Murugiah will drop on Monday 29 November 2021 and be available for seven days only. 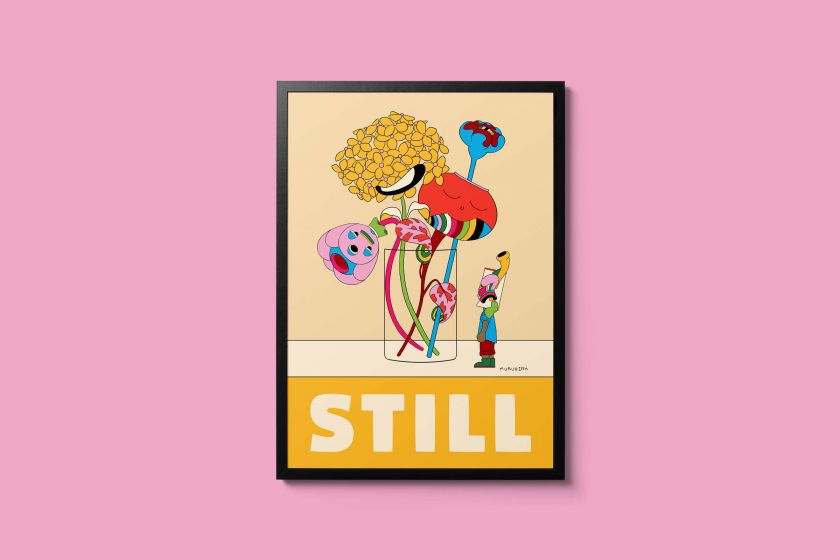 Rob Lowe, aka Supermundane, is an illustrator whose work is instantly recognisable with his signature geometric drawings known for their playful use of colour, line and optical effects.

For Creative Boom’s 10th anniversary in 2019, we were honoured to welcome Rob as one of 10 artists to create a bespoke birthday print for our platform with a donation of proceeds going towards the British Heart Foundation.

Now, as we launch a more permanent online shop, we’re delighted to have Rob back, and he’s kindly donating this artwork once again. Creativity Is in All of Us speaks for itself and is a celebration not only of our ongoing love of championing creative professionals everywhere but is a reminder that creativity lies at the heart of everything we do.

Creativity Is in All of Us by Supermundane will drop on Monday 6 December 2021 and be available for seven days only. 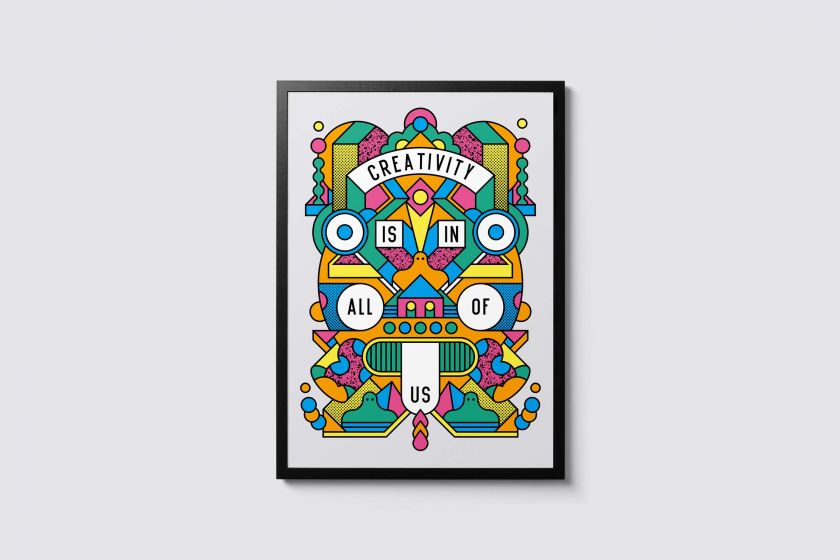 Creativity is in All of Us by Supermundane

Maaike Canne is an illustrator and visual artist based in Rotterdam, the Netherlands, who has collaborated with clients including The New Yorker, Apple, The Atlantic, Pinterest, Die Zeit and Architectural Digest. She’s known for work that exhibits a thoughtful, surreal quality, and is influenced by architecture, design, nature and history.

For Creative Boom, Maaike has created an exclusive print called Snuff Bottles From the Qing Dynasty. This piece shows four snuff bottles in bright, colourful compositions. “Smoking tobacco was illegal during the Qing Dynasty,” explains Maaike. “But the use of snuff was allowed because the Chinese considered it to be a remedy for common illnesses such as colds, headaches and stomach disorders. The bottles were typically decorated with paintings or carvings, which distinguished those of different quality and value. Some were regarded as objects of high value, exchanged to mark social ties or presented as gifts from the imperial court.”

Consequently, there’s a lot of symbolism and meaning in the pictures portrayed on snuff bottles, and Maaike’s four contemporary designs follow that tradition.

Snuff Bottles From the Qing Dynasty by Maaike Canne will go on sale for seven days only from Monday 31 January until midnight on Sunday 6 February 2022. Our first exclusive print of a brand new year. 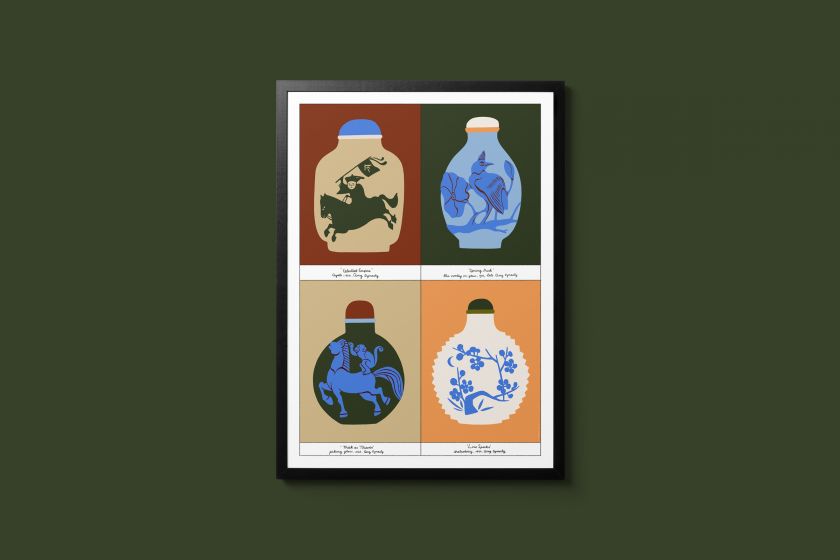 Snuff Bottles From The Qing Dynasty by Maaike Canne

We really hope you enjoy our debut collection. Our is now open, kicking off with illustrator Luis Mendo and his beautiful artwork, The Home Stayer. You have from now until midnight on Sunday 21 November 2021 to buy this very special A3 print. Don’t forget to subscribe to our to be the first to hear of any future drops.