Daft Punk’s Discovery at 20: collaborators on crafting the iconic robot look and revolution 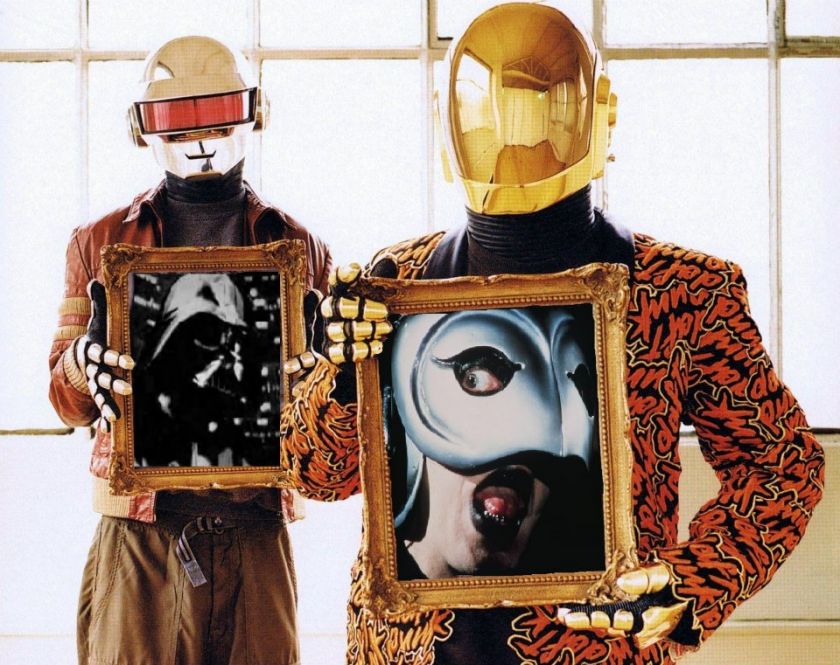 A whole generation of producers would disguise themselves over the next twenty years with masks and helmets of their own making. The main man behind the revolution was the founder of and Co-founder of Tony Gardner, a Californian SFX legend who’s helped transform everyone from Sacha Baron Cohen to director Spike Jonze. As Creative Boom learns, it was actually the latter who recommended Gardner to the act, having worked with Tony on 1999’s Three Kings and Daft Punk themselves on classic videos Spike directed for them like .

“They were looking to create personas that were more specific and long-term because they’d usually put on a disguise or a mask for performances for the sole purpose of masking their identity, without thinking of the image,” Tony tells us over video chat. “The goal was to create an identity for them that would continue with longevity. They had an idea they wanted to be robots which they wanted to incorporate into cartoon form into , and then have the robots ‘come alive’ for the new album.”

remembers this real-life realisation well; after all, the French creative was the one who photographed the duo for Face magazine’s rather eye-opening spread. As these the robots were posed in some very human scenarios indeed, chilling with a bunch of laughing nudists being the most memorable example.

“They wanted to portray a day in the life of Daft Punk,” Luis tells us in a phone call from New York. “I came up with some of the scenarios, like the one with the people naked. That shot was actually taken in the Los Angeles house they were staying in at the time. We hired people from a real nudist colony, and as I was preparing the lights they came in – and all of a sudden, they were naked!” 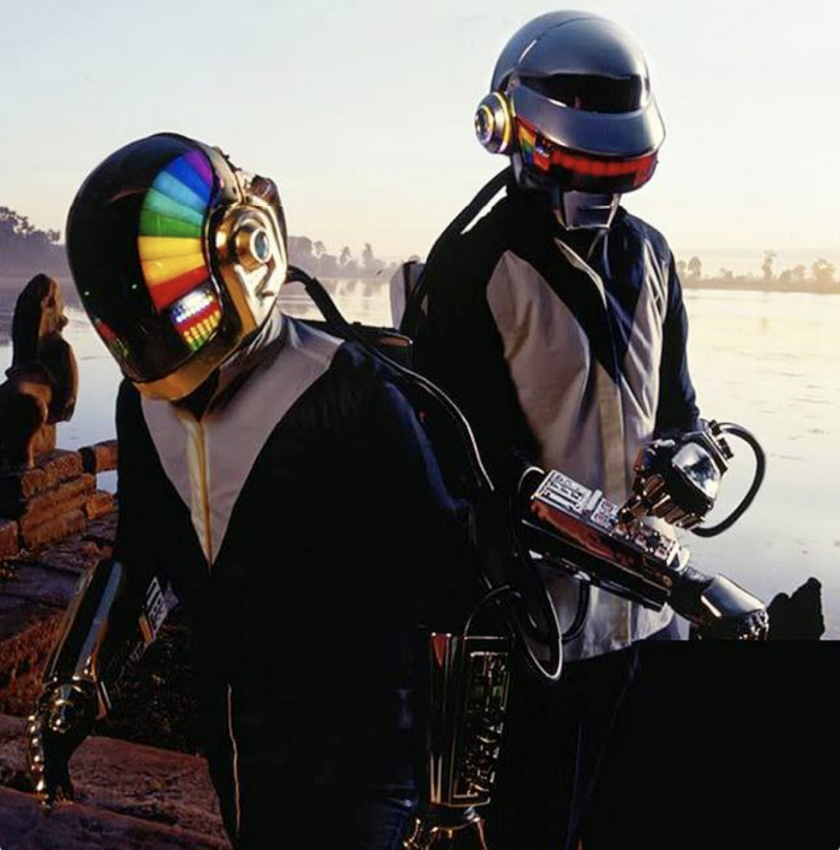 The Face shoot took place in late 2000, by which point the playful, textural work of the photographer defined the magazine’s look. Though already a seasoned pro with years of experience behind him, working with robots still posed a unique set of challenges for Luis.

“They had to wear the helmets with a backpack (powering their LED displays), so their clothes had to be bigger sizes to hide the backpacks. The tricky part was one shot where they’re reclining in loungers by a pool. We had to make a hole behind their heads to put the cables connected to the backpack: There was no Photoshop back then, everything had to be done in-camera. But people like to hire me for very challenging projects, so I know how to execute them well.”

Tony reveals the helmets and backpacks were equally challenging to make. At the time, he and his colleagues at SFX studio Alterian Inc. were busy making prosthetics for the Farrelly Brothers flick Shallow Hal. Their stock-in-trade came in handy when making ribbed hoods for the costumes out of foam latex. Everything else, though was a real journey of discovery.

“Inside our shop was like two different worlds,” Tony recalls. “It was big bodysuits over here (for Shallow Hal), and on the other side, it was all hardware and robotics and people figuring out how to vacuum-metalise fibreglass. We had no real previous experience in things like metalising, chroming, metal plating, LED technology, or anything this complex! Stuff like the circuitry, the readouts and the manufacturing of the LED screens themselves, it was all within learning distance, but how to program that and create a console that Daft Punk could then wear on their arm to control those facial features? We needed to reach out to people that were already experts in the field.”

Experts who got involved included one of the main brains behind those Jumbotrons which embarrass couple spectators in baseball stadiums. The result allowed Daft Punk to communicate with those around them through their sci-fi helmets. 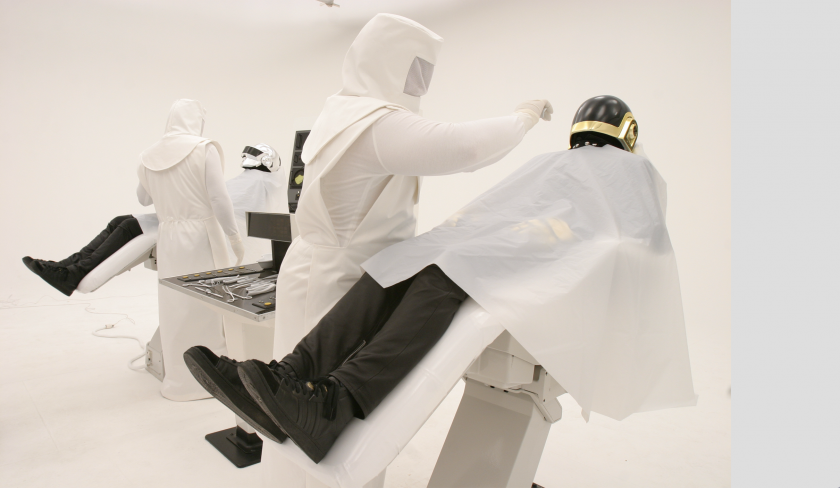 “We pre-programmed a bunch of responses and visuals on Guy-Manuel’s helmet and taught Thomas how to do the keypad on his arm so that they could really be in control of their characters. Thomas got into the programming right away. He’s such a smart guy, and he came up with some really cool stuff. He’s also a very communicative person, so that’s why he has literal text on his face. It’s literally sort of who he is.”

Guy-Man, as Tony calls his old friend, is a quieter and more introspective sort of Punk, which inspired the team to output all his communication as pictographs. As he says, “Whether it was a heart showing up or rain coming down, there was never a word on his face, ever.”

Early concepts of the bots by Alex Courtes and Martin Fougerol were inspired by cult movies like The Man Who Fell to Earth and Phantom of the Paradise. These designs originally envisioned a red visor for Thomas and a golden NASA-style one for Guy-Manuel, until it hit that the latter was impossible for photographers like Luis of The Face to shoot.

“We realised quickly that everything in the room reflected in the gold visor,” explains Tony. “You couldn’t take a photo of Guy-Man without seeing the camera and everything in the room! All of a sudden we were trying to dull down the visor’s metallic finish so we could infer that robot vibe, but still make it function.”

“When you shoot a flash at Guy-Man now you don’t see anything inside the helmet because his faceplate has multiple layers. We had to create another interior layer like a tight black mesh that allowed him to see through it but didn’t allow people to see him. That mesh layer had to allow the LEDs to read through it as well.” Tony reveals the tinting for the helmet was done by a company in Ohio that manufactures astronaut helmets, an interesting precursor to recent campaign work Tony has done for NASA with his creative studio Oxcart Assembly. Another interesting factoid? The Punk robots were originally as hairy as us human folk. 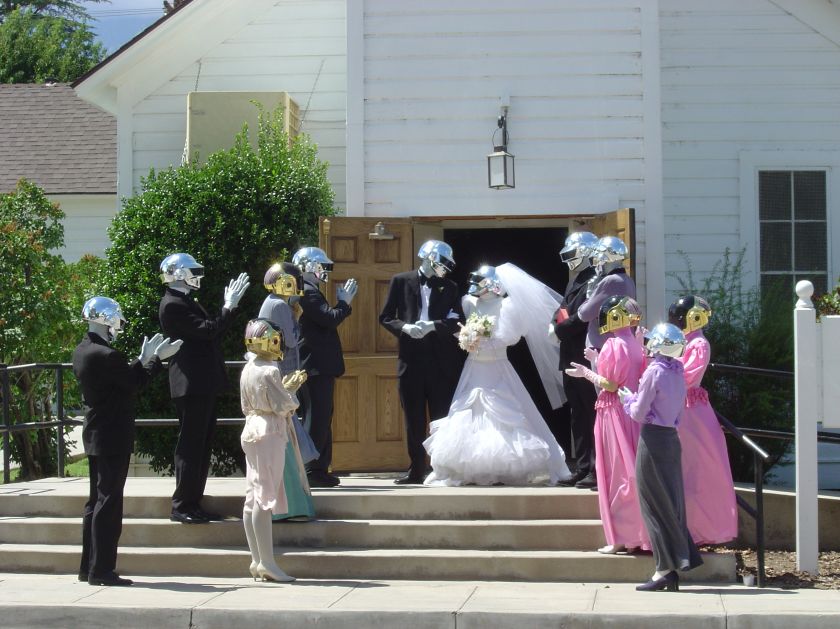 “The characters actually had hair on their heads up until, I don’t know, half an hour before their first photoshoot,” Tony reveals. “That’s how fluid and organic the process was when we were designing and fitting.”

Once Discovery was out of the door, Tony and team worked on elements of the live show in support of the album. The collaboration continued in the form of promos for third LP Human After All. It ended with Daft Punk’s Electroma, the cult art house film celebrating its 15th anniversary this year that finishes with – spoiler alert – a rather explosive ending for the robots.

“We thought everything was gonna end after Electroma,” says Tony. “It’s like; they’re done, we blew them up, we burned them down, that’s the end of it.” 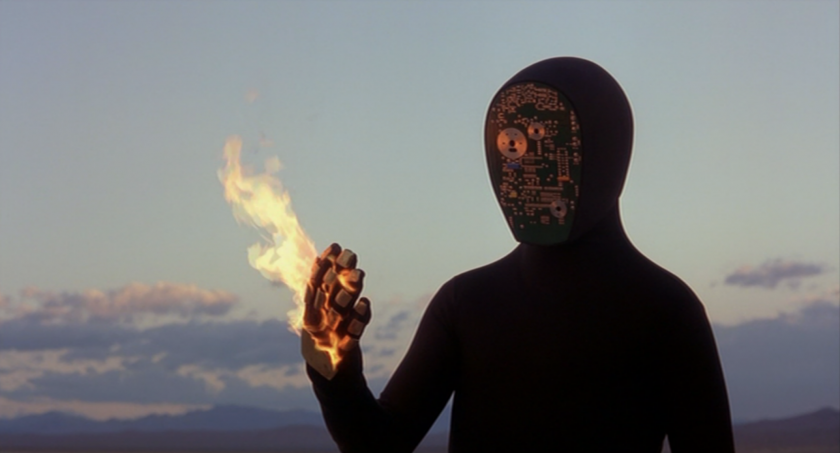 Of course, you can’t keep a good concept down. The robots would make a return in TRON: Legacy and later music videos in updates on the original Alterian makes of Y2K, proving that Daft Punk would be forever associated with their robot guises. While the musical DNA of Discovery is all over any retro dance or pop track with soft rock and disco elements, the album’s visual impact remains harder to miss.

It’s easy to forget that there was little else like it on the scene when the robots first emerged in Face’s February 2001 issue. In fact, the rebranding of Daft Punk as robots was a vital push behind Discovery’s marketing. As Luis explains to us, even though his Face shoot has the feel of cinema from the ’70s-’80s period the Punks were borrowing sounds from, the music itself wasn’t available to him during the planning stages.

“The pictures weren’t influenced by the music at all,” he tells us. “They had their own identity. It was more about introducing the helmets.” The photographer’s work undoubtedly pushed the glowing, otherworldly look of these aliens into pop culture, changing the rules for how an artist could market and represent an identity in music. Not that either creative could have realised it at the time.

“I think as time’s gone by we’ve obviously realized the impact that our combined work has had,” says Tony. “When you’re in the moment, you don’t realise something can have that sort of lasting impact. You just dive in with enthusiasm and try to figure it out.”

“It was an enjoyable experience, and it was exciting, and it was new. It’s a very creative group of people, and I feel very fortunate to have been a part of that.”

The futurists of Daft Punk, timeless after all.