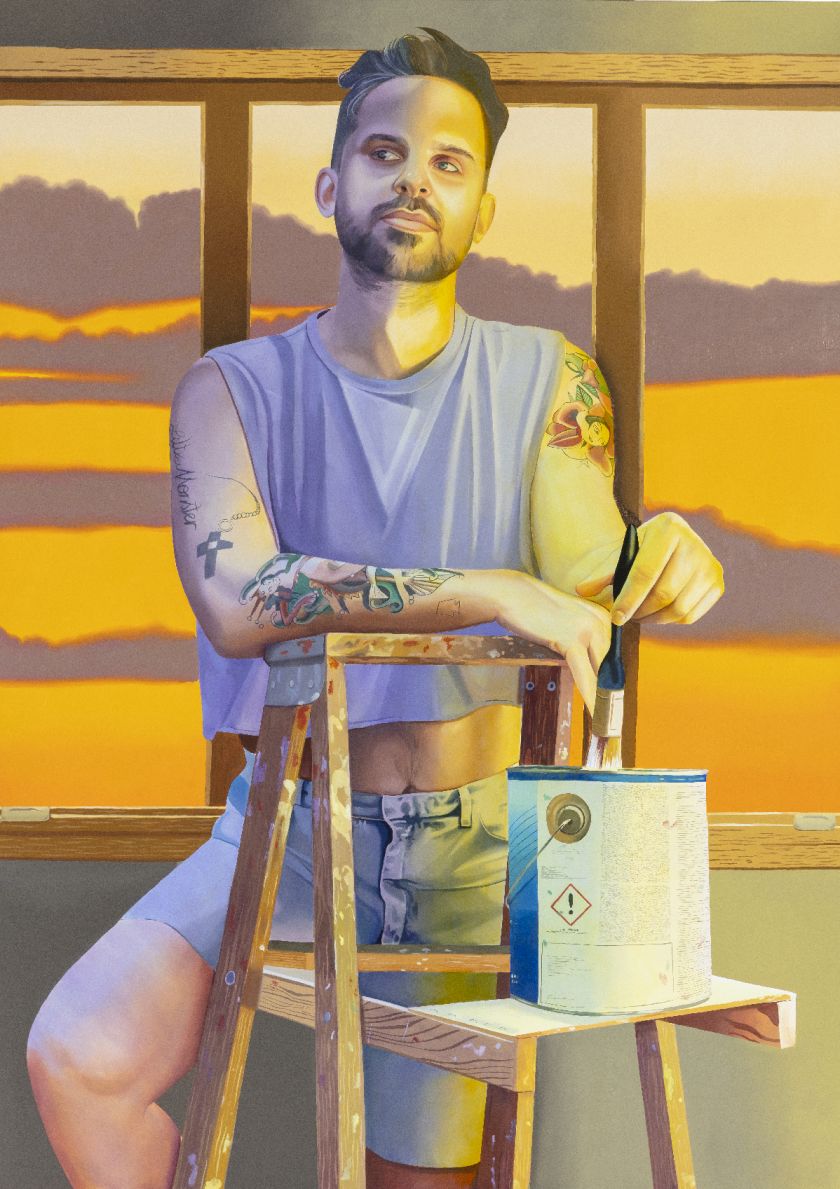 The Pittsburgh-based artist talks us through his new body of work, currently on show at Miles McEnery Gallery in New York until 23 April 2022.

is influenced by the church in more ways than one. For starters, the painter’s studio is based in an old renovated church, which is where he creates his colour-riddled portraiture of friends, acquaintances and loved ones. He also went to Catholic school for ten years, “so it feels like a full-circle moment painting in a church basement,” he tells us. The artist also never shies away from using Catholic symbology or imagery, which often takes shape via angelic colour palettes, luminous lighting and saintly stances from his sitters.

His most recent body of work is the pinnacle of that – a series of paintings portraying his friends and peers, which are now on show at through to 23 April 2022. In these pieces, Danny has crafted a vibrant collection with warm, saturated environments and powerful compositions. His subjects, more important, are those that he resonates with; people from the LGBTQIA+ community that he captures going about daily activities, like riding a bike. “I want to put positive images of gay men and queer-identifying individuals into the world, so we can diversify the often tragic canon of LGBTQ film and art,” says Danny in the press release about the show. 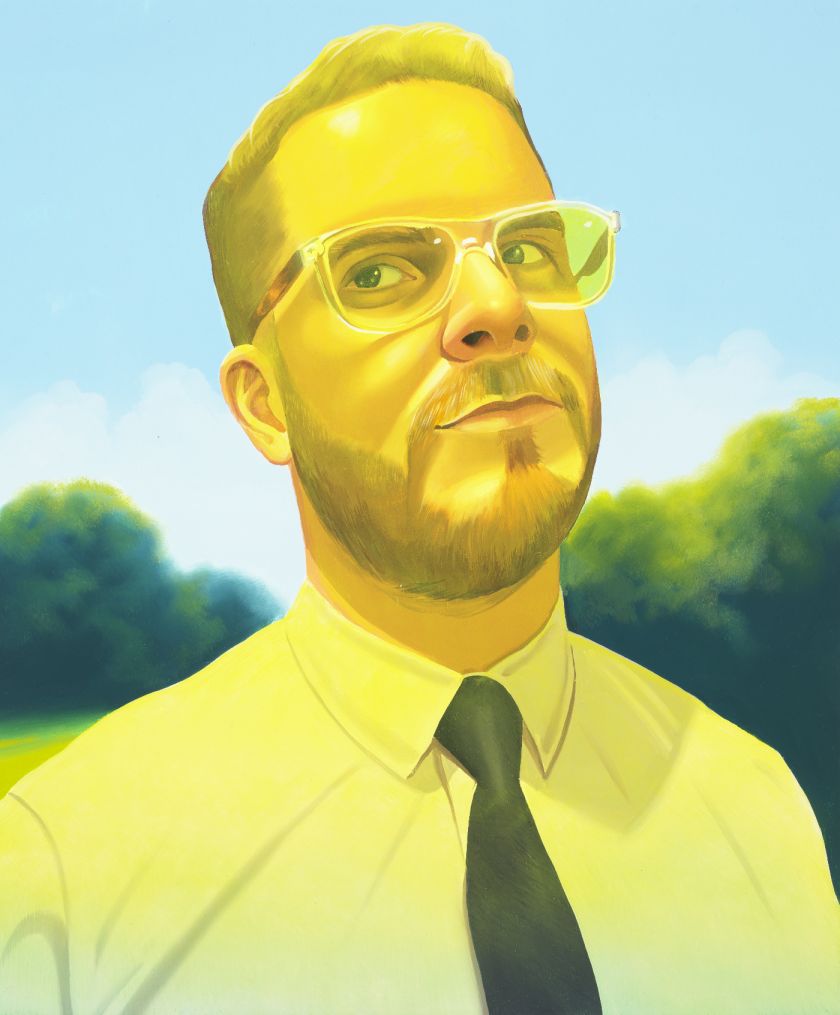 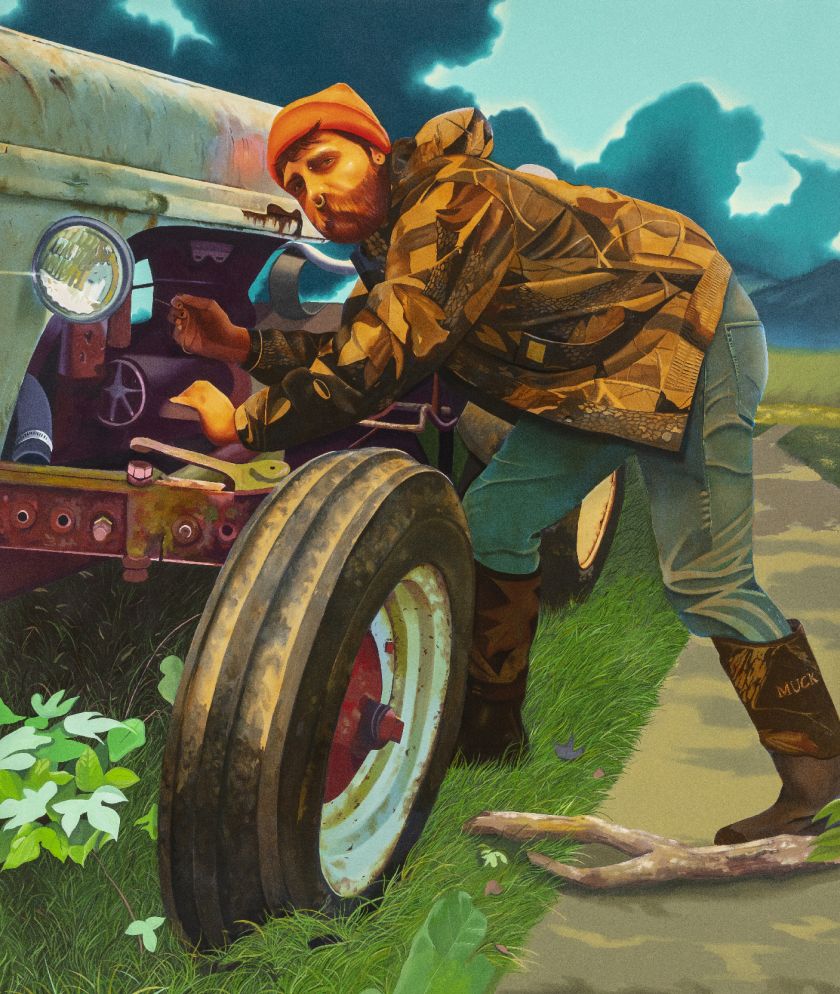 A usual day for Danny begins with a wake-up call from his dogs at around eight in the morning. He gives them breakfast, “nurses” a coffee, and catches up on his favourite YouTube videos. Next, he’ll arrive at the studio by 11 to “stare” at his work for a half-hour before he starts mixing his colours for the day. “I’ll order a little lunch and paint until about six or seven – a pretty standard day!”

When it comes to painting a subject, usually Danny will approach the sitter or shoot a message to someone he thinks has an interesting look – “one that communicates something subjective through appearance,” he explains. “I was raised Catholic, and a lot of my work is influenced by Catholic images. I think of my paintings as idols, and I want my subjects to feel elevated, saintly and seen.” An example of this can be viewed in The Farmer’s Son, one of his most technically challenging paintings to date but also the most rewarding. “It’s very theatrical, compositionally complex and has a Fragonard-ish colour palette,” he says. This specific work sees the subject, the farmer’s son, leaving over a mechanical vehicle, appearing to be mid-fix. He stares into the eye of the viewer sternly, his stance strong; he seems composed and strong in his demeanour. “I also responded to the hypnotic, misty quality in I Kiss Boys,” he says, pointing out another artwork of a subject riding a bike in a dusky, hazy evening. 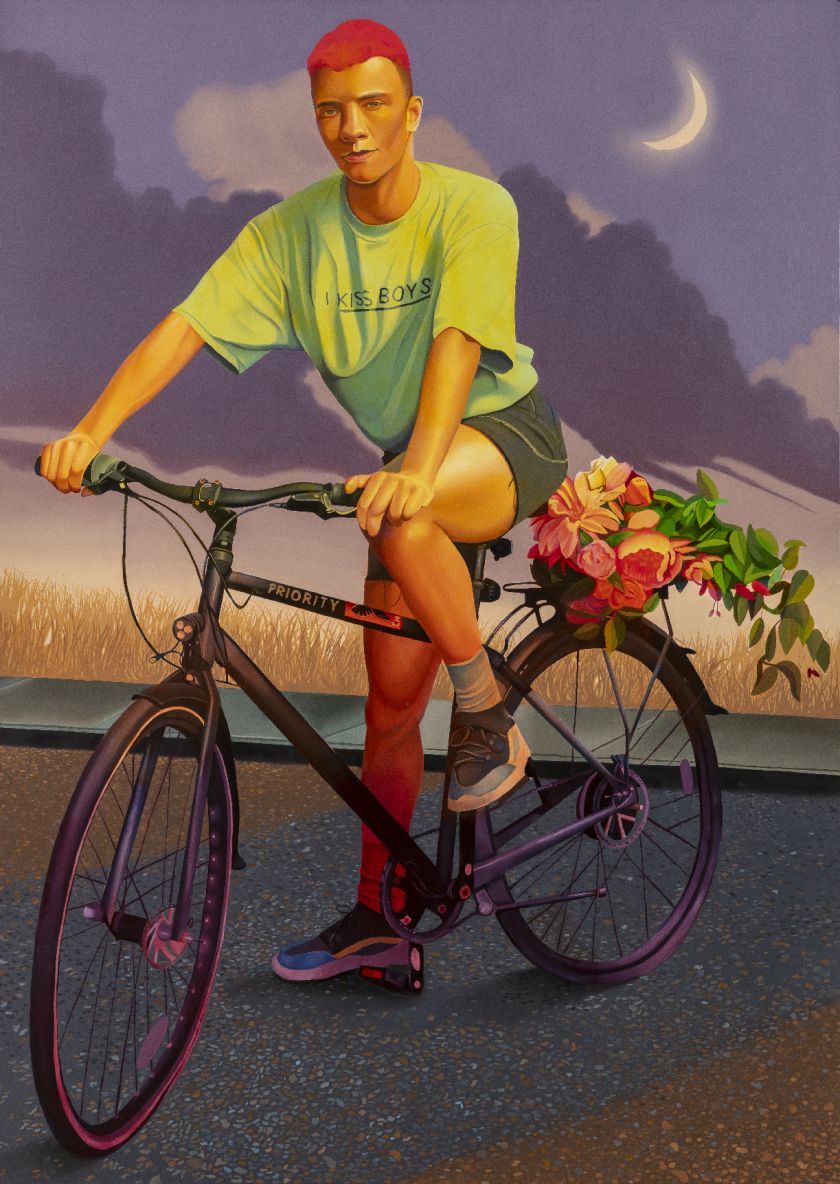 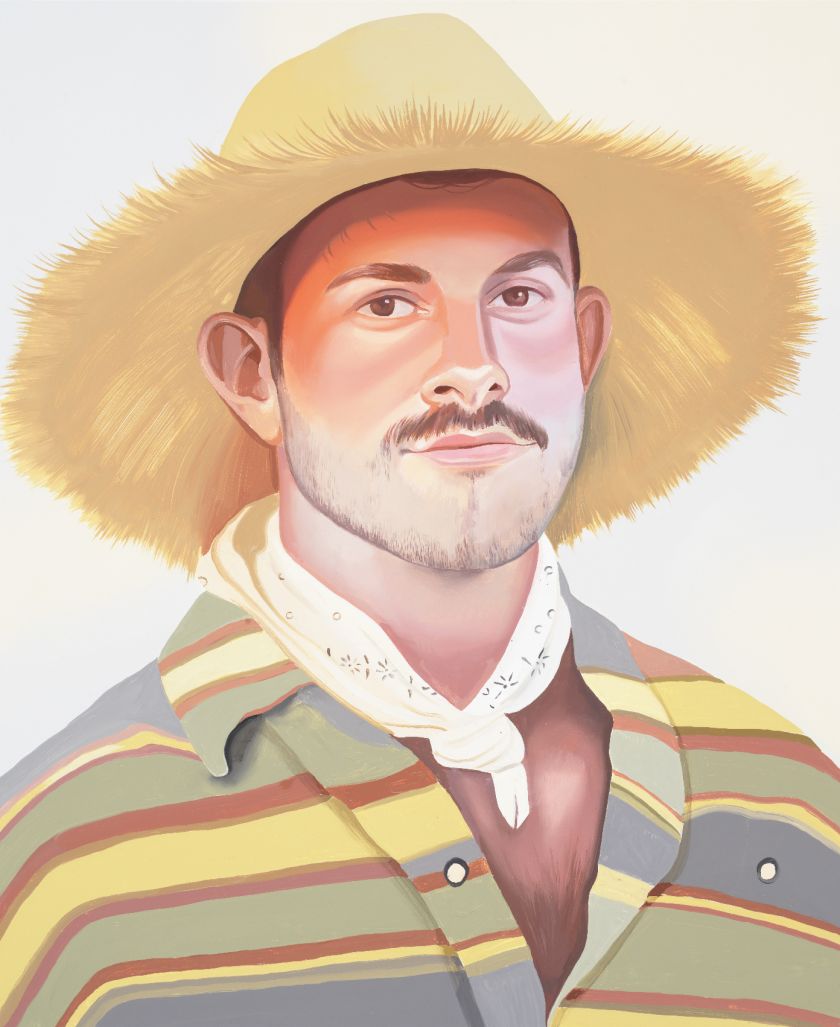 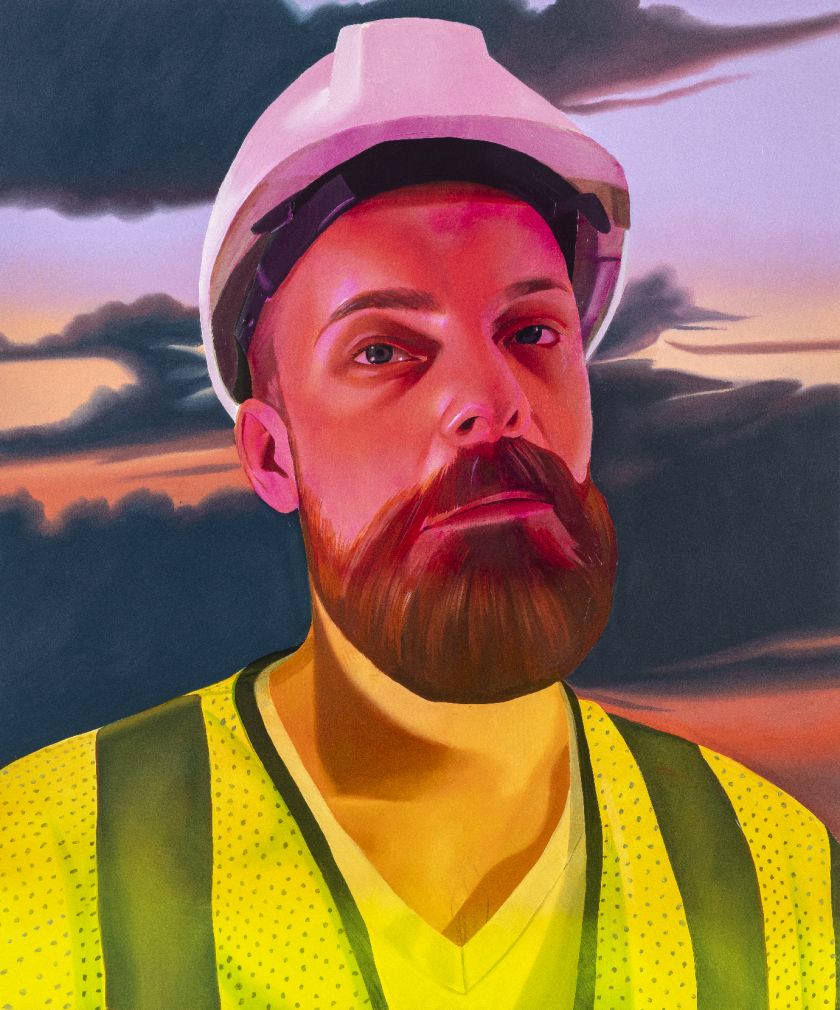 The last painting he worked on is one called Straw Halo, which was made for the show. “It recalls the Monstrance, a sunburst-like vessel that holds the Eucharist during Benediction,” he says. “My experiences and time in Catholic school really influence my aesthetic point-of-view.”

Although subtle, Danny’s work is brimming with historical, political and biblical context; there’s much to be uncovered from one of Danny’s paintings. “There’s no particular message or agenda in the work, but I hope the audience feels welcome. The teacher in me wants the viewer to learn about the construction of paintings just by experiencing them,” Danny concludes. “My favourite artworks are always ones that I can’t ground in language – there’s a magic or intuition about them that communicates differently. I hope the work registers on that level, but if people walk away from the show simply enjoying the pretty colours and light, then that is good enough for me.” 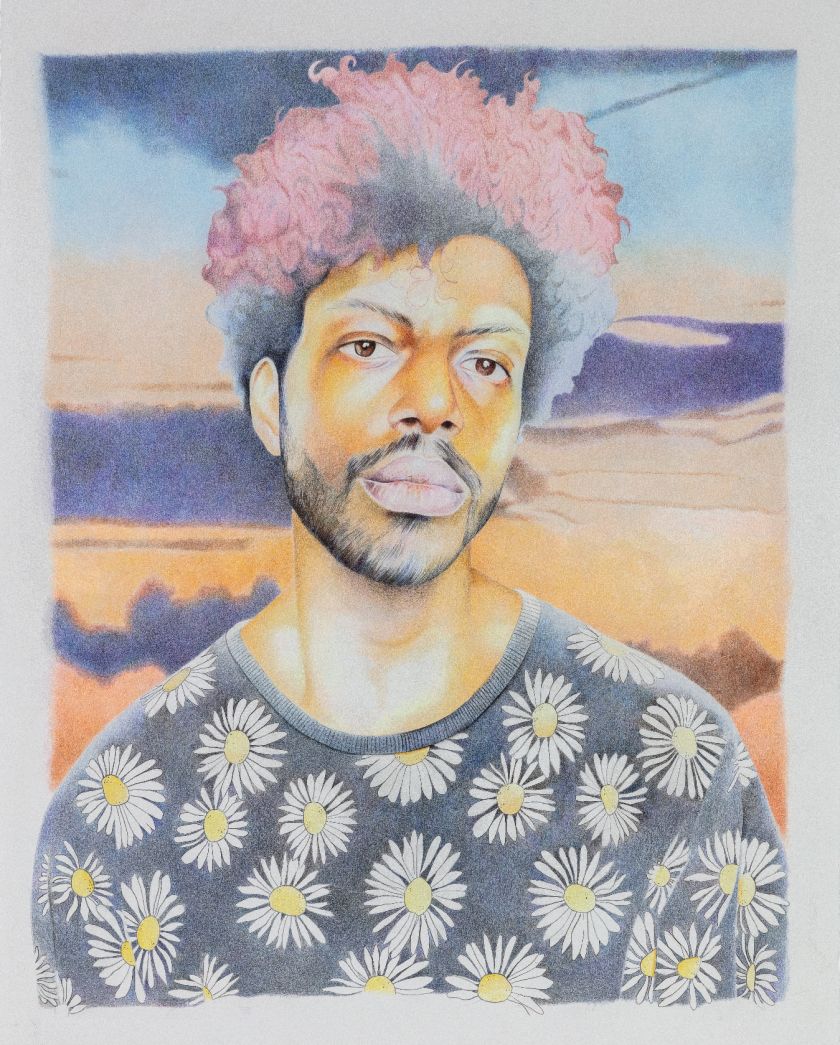 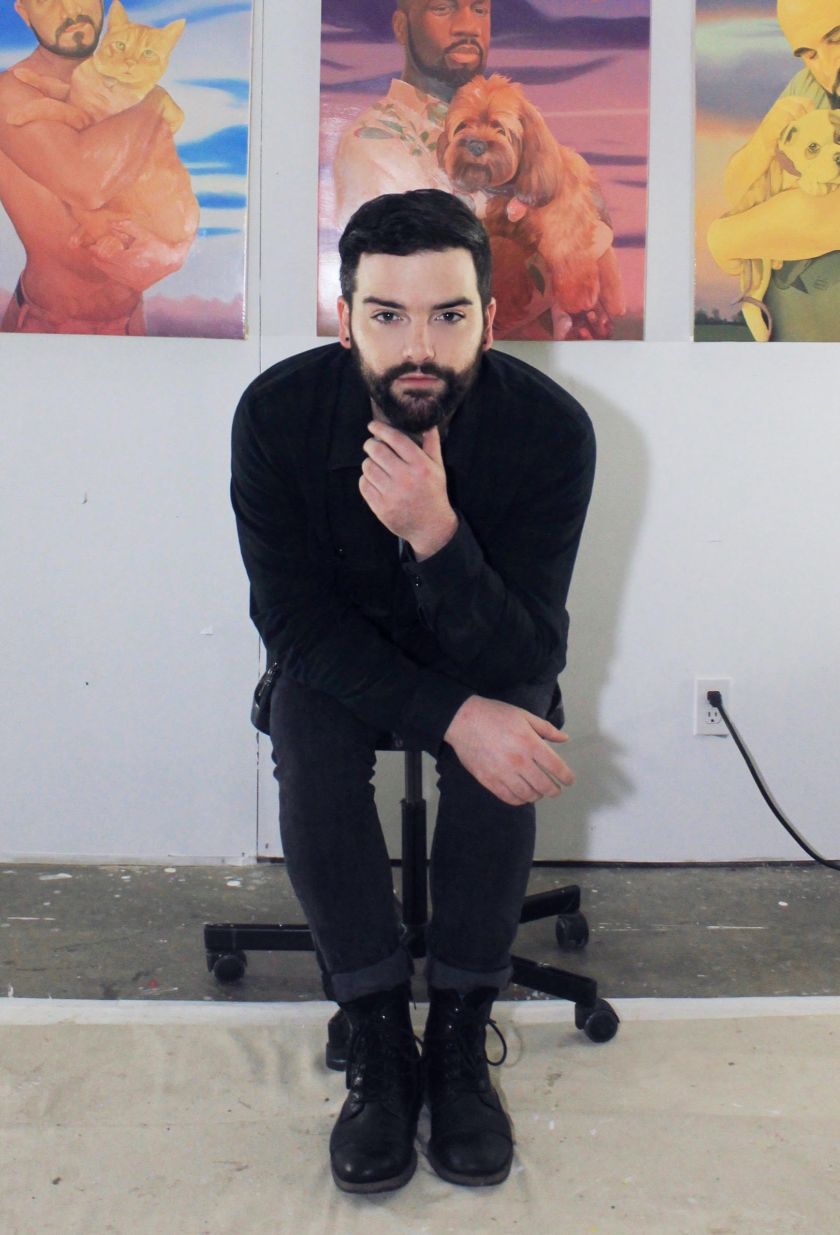