Dubai’s Museum of the Future Offers a Message of Hope

It takes a lot to stand out in a city full of spectacular landmarks, but Dubai has done it again with the , an elliptical stainless steel structure covered in Arabic calligraphy. Created by in collaboration with engineering firm Buro Happold, the museum rises to a height of 252 feet atop a hilly green podium along the 14-lane Sheikh Zayed Road. The $136 million government-sponsored facility opened last month, welcoming visitors into a series of exhibitions previewing exciting new ideas and technologies. 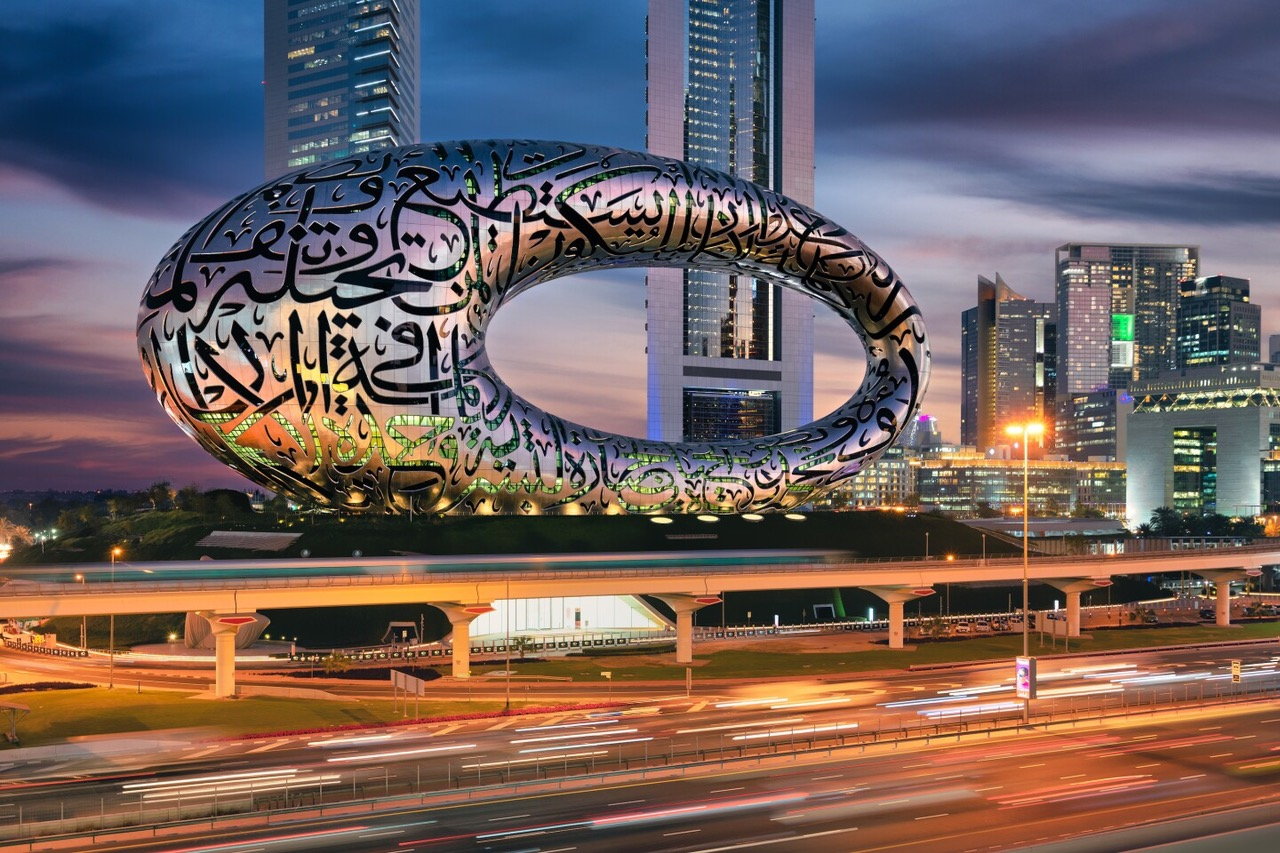 It took 18 months just to install the robotically manufactured exterior panels on the 322,000-square-foot museum, which is spread out over seven column-free floors. The unusual structure is a torus shape with an ovoid cutout in the middle, described by some observers as a massive eye. Its structural design relies on a network of 2,400 steel tubes intersecting diagonally in the outer frame, which supports slabs of concrete flooring and 183,000 square feet of cladding. 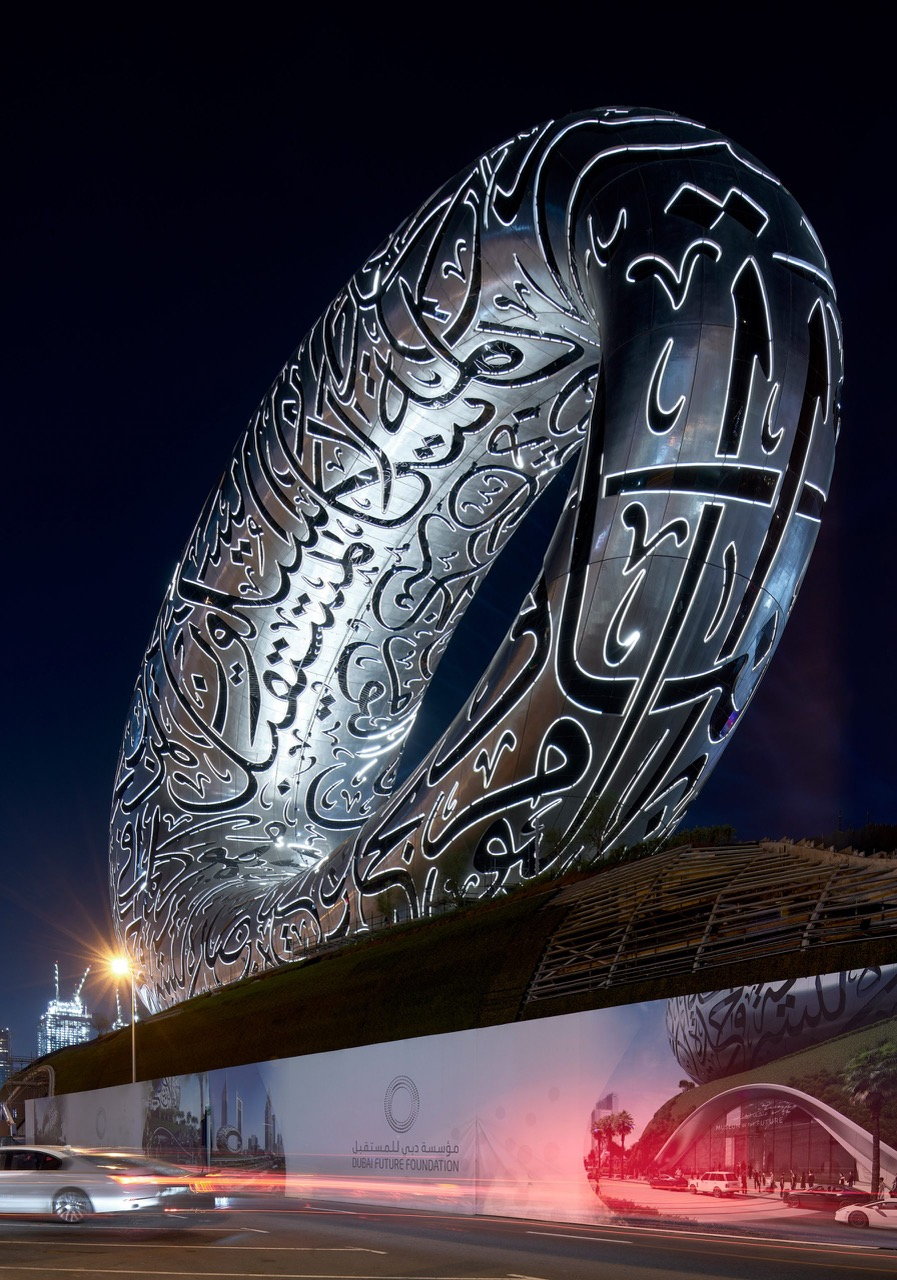 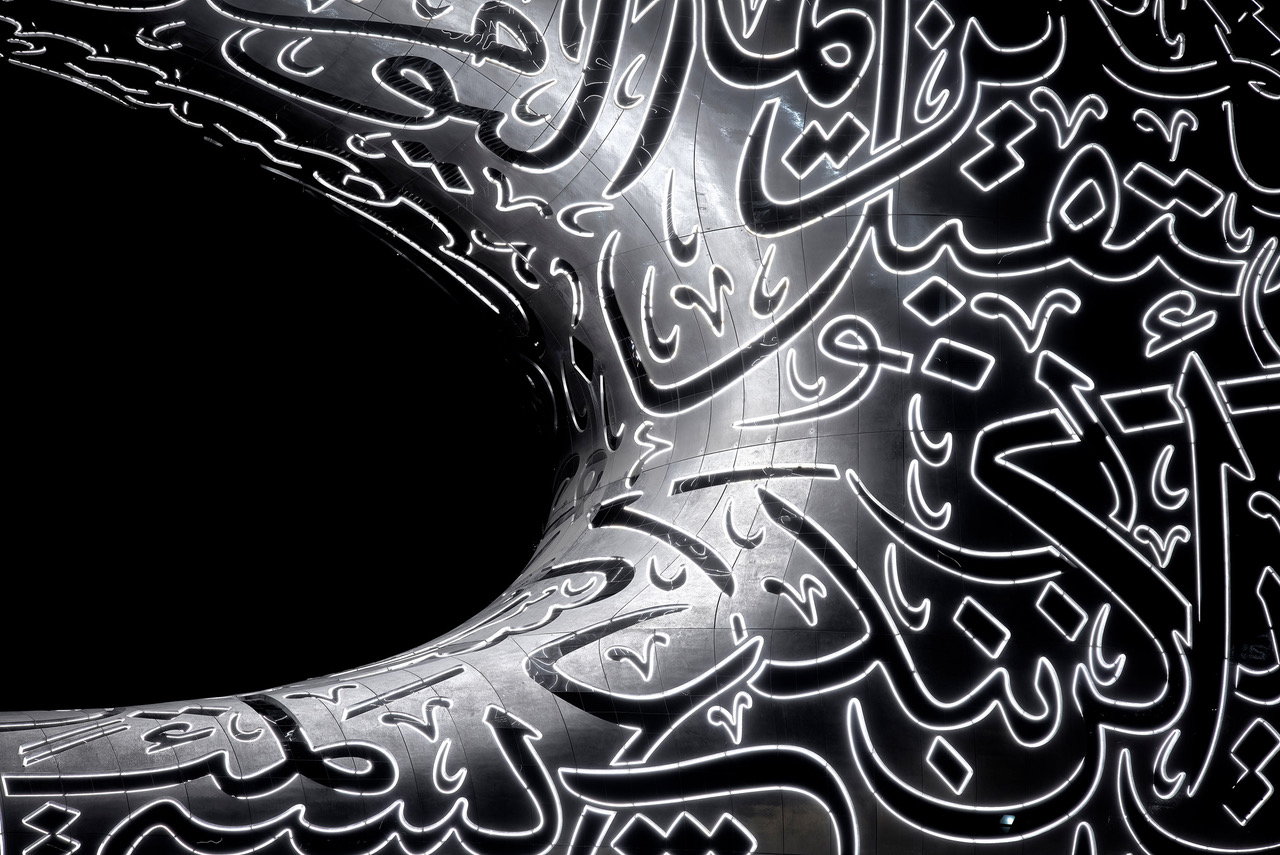 Designed by Emirati artist Mattar bin Lahej, the three-foot-tall text on the outside is a message of hope for the future from Dubai’s ruler, Sheikh Mohammed bin Rashid al-Maktoum. It’s incised into the panels, allowing sunlight and LED lighting to outline the shapes by day and night. 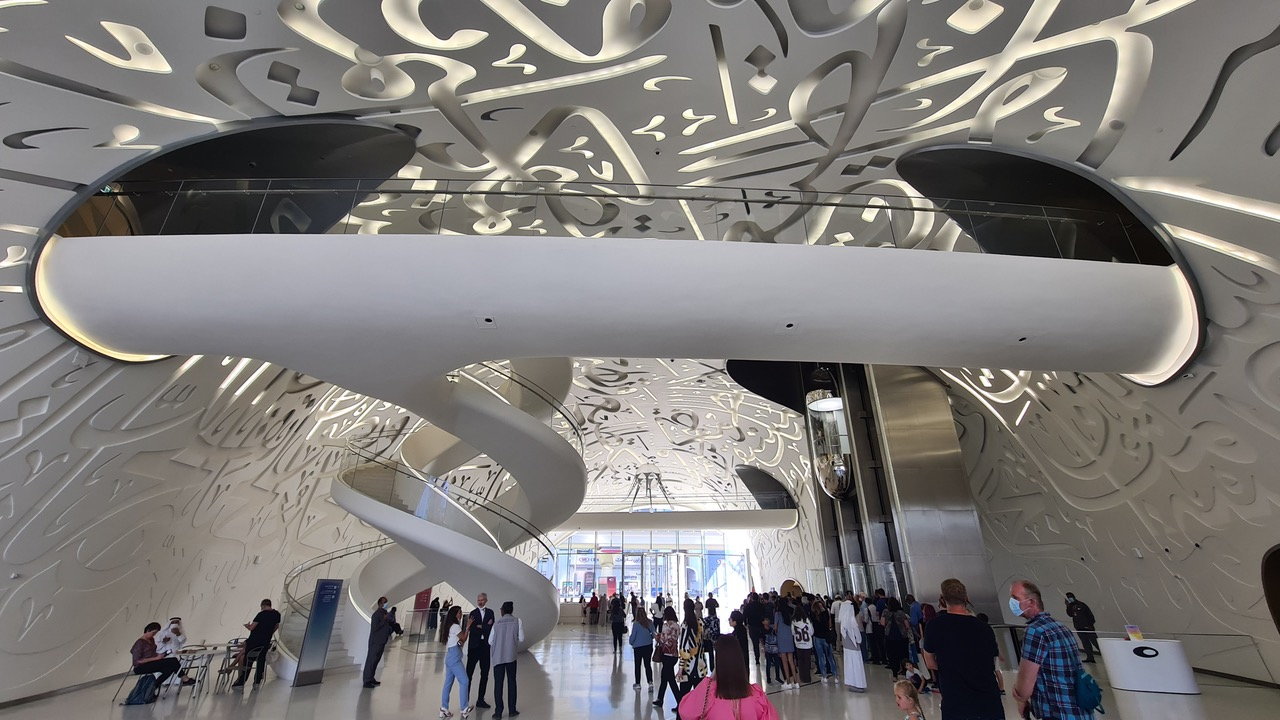 “Standing 77 meters tall, the avant garde facade is made of stainless steel and glass, consisting of 1,024 separate panels, each one specially created by robots and algorithms,” explains a press release by the Museum of the Future. “The number of panels has its own significance. It represents a basic unit of the digital information storage system of computers, which is a kilobyte, and each kilobyte is equal to 1,024 bytes. The Arabic script windows cast light into the interior by day and at night illuminate the city’s iconic skyline with 14 kilometers [8.7 miles] of energy-saving, resource-efficient LED lights.” 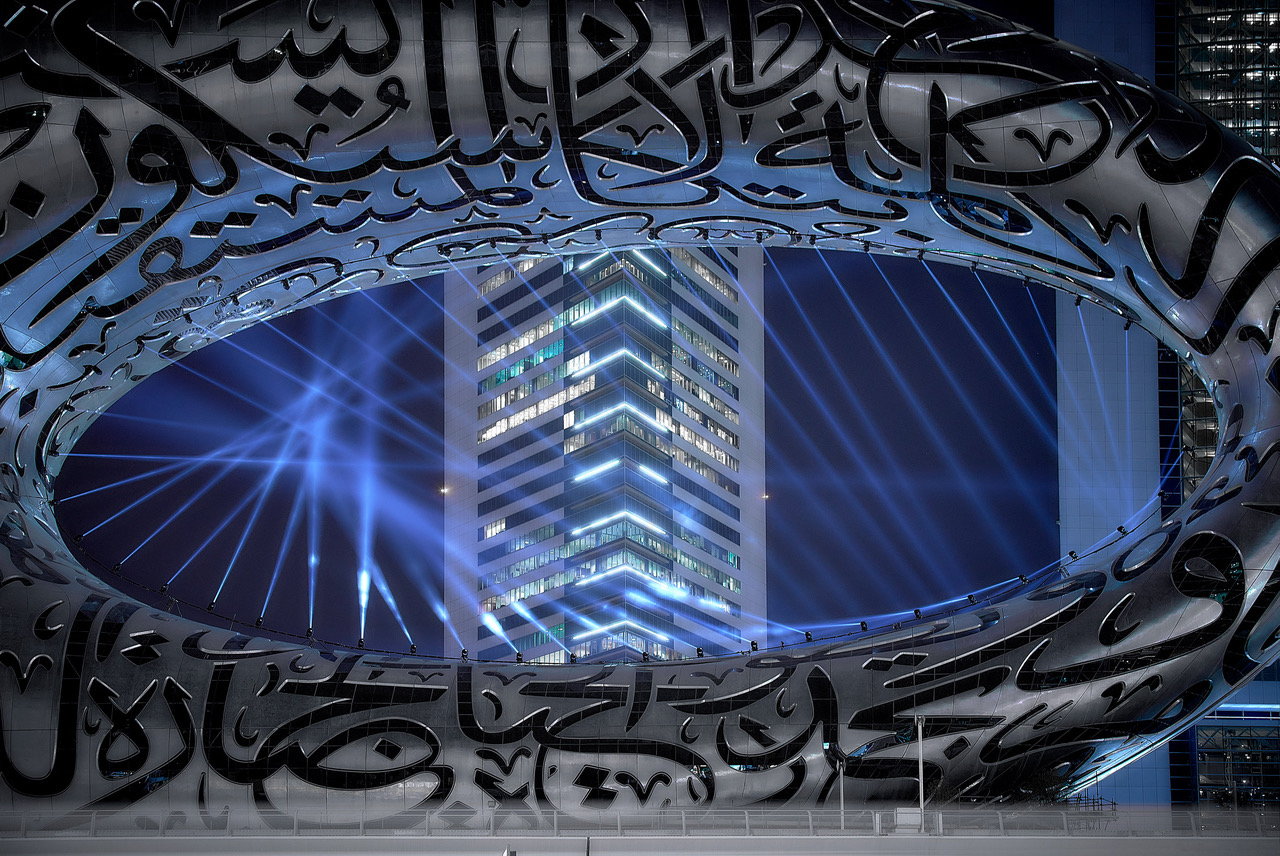 “Due to the building’s complex geometry and flowing calligraphy, each separate panel is unique. No two are alike. Each piece had to be individually precast and produced, with numerous prototypes designed and manufactured before a winning formula could be achieved. Every single panel was produced using automated . Each panel is made up of four layers and was created following a complex 16-step process. The precision and focus required to create each panel meant that only several could be produced per day.” 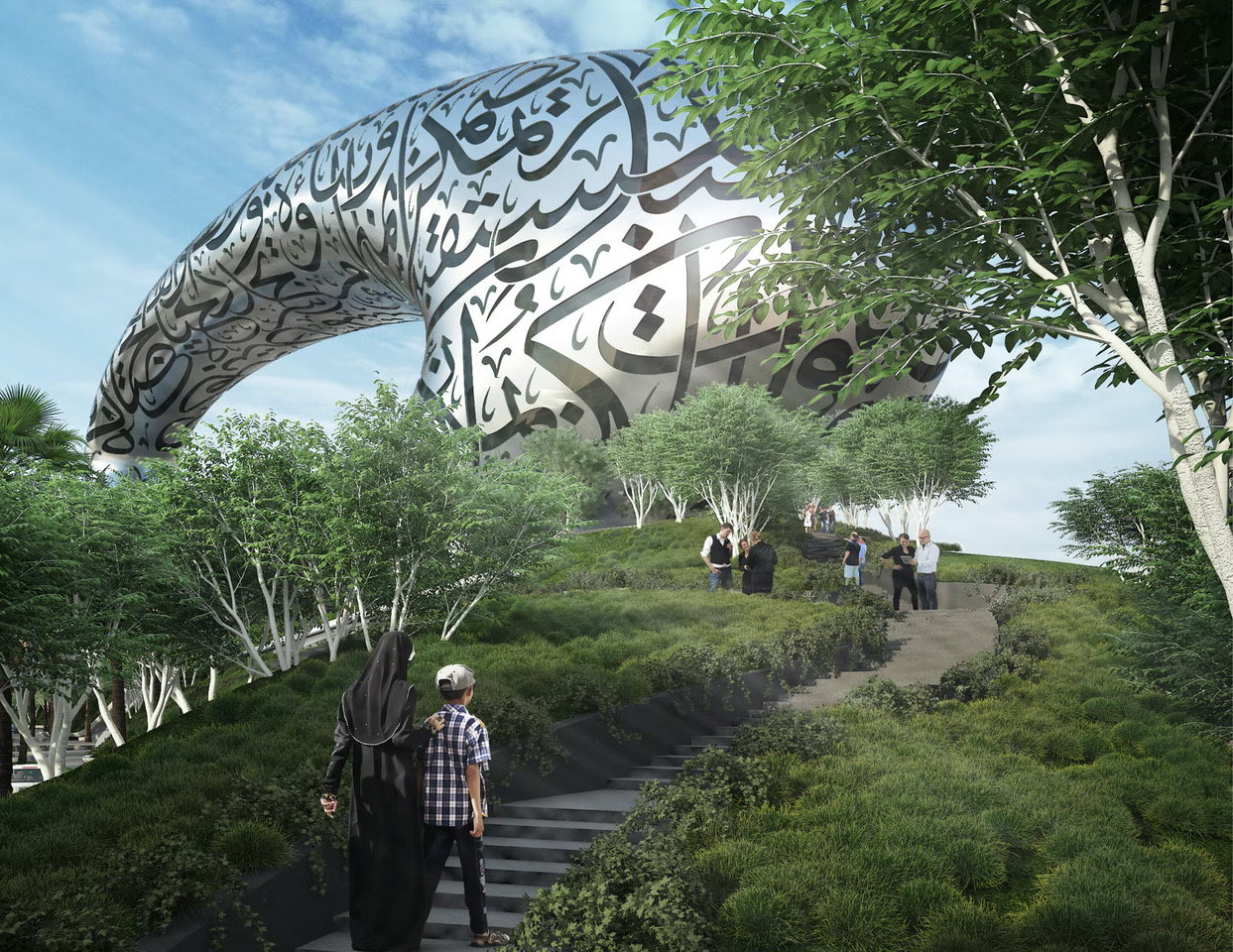 Inside, visitors will find a mix of traditional exhibitions, immersive theater, and themed attractions. It’s also home to Dubai’s “Great Arab Minds” initiative, which aims to identify 1,000 exceptional Arab talents across key fields. The museum is envisioned as “a gateway to the world 50 years from now,” demonstrating how next-generation solutions like artificial intelligence and can enhance our lives. Each floor is designed like a movie set brought to life by storytellers, technologists, and artists, focusing on topics like space travel, climate change, ecology, health, wellness, and spirituality.

Tickets for adults are 145 AED (about $39 USD) and free for kids under three years old.