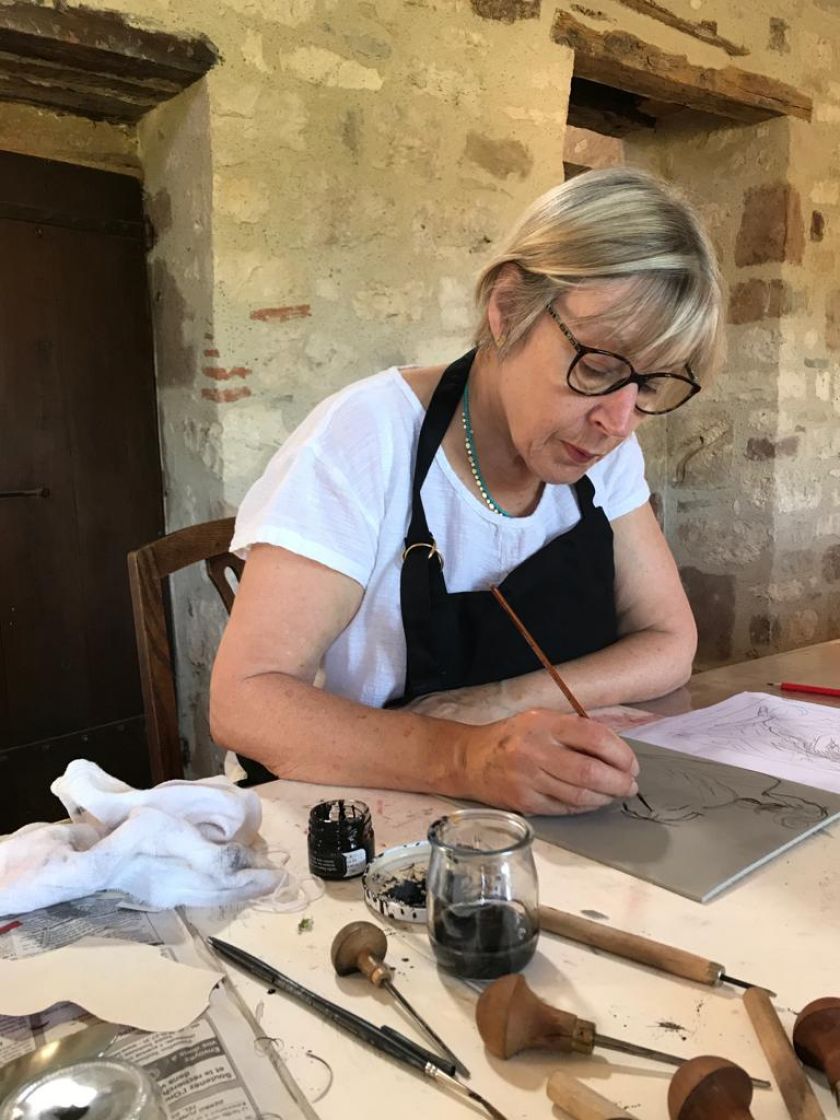 The acclaimed British artist talks illustrating her first novel in a Creative Boom exclusive, as The Folio Society releases a new edition of a 20th-century classic resplendent with Eileen’s art.

A tale of love, magic, circuses and lies, Nights at the Circus is now available in a glorious new edition from distinguished publishers The Folio Society. With illustrations by celebrated printmaker , the release marks the novel’s first-ever illustrated edition. The book also comes accompanied by an exhibition of Cooper’s work, with an introduction by renowned novelist Sarah Waters.

In our interview, we learn more about Eileen Cooper’s work and vision for the book, including nine original colour lino-cut collages and a monoprint title page spread. All of the pieces perfectly suit Angela Carter’s wildly original storytelling and gorgeously slippery language, and what Waters describes as the author’s unique power to ‘unsettle as well as to inspire and console.’ 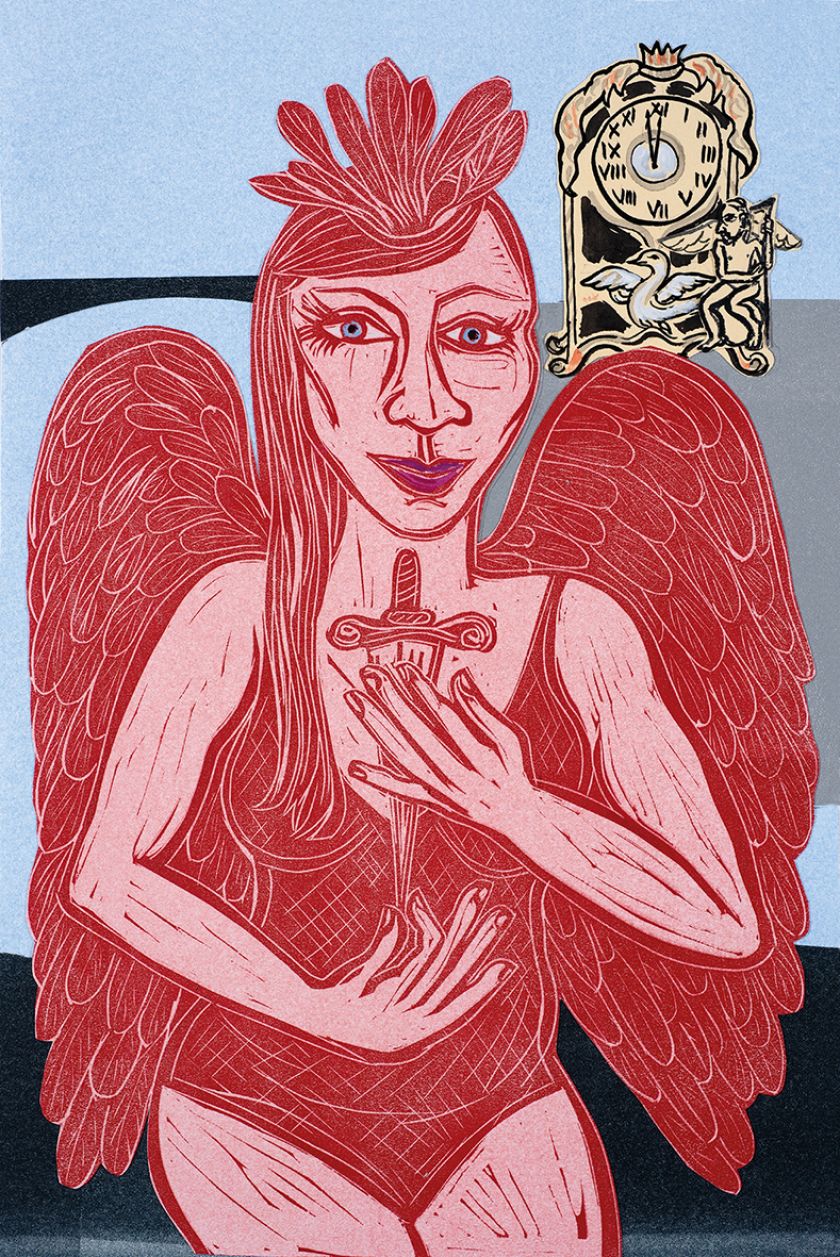 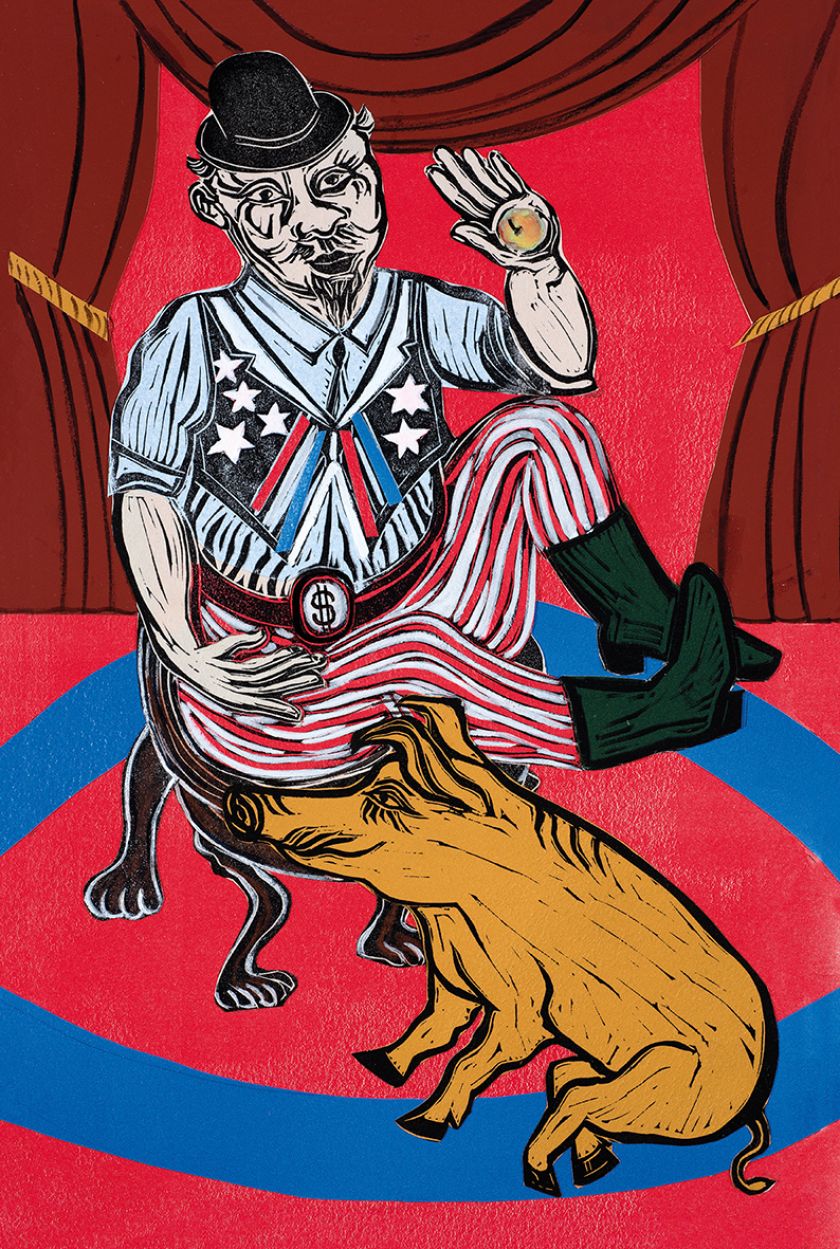 A Royal Academician, Eileen has credited fairy tales, mythology and the female figure as core inspirations for her work, making her the perfect artist to bring the late Carter’s lush imagery to life. Each illustration is bold, striking, impossible to look away from. The chapter headings feature the ordinary and extraordinary totems of the life story of the half-woman, half-swan Sophie Fevvers. The tale recounts journalist Jack Walser’s quest to expose Sophie as a fraud, but who instead finds himself captivated by her beauty and strangeness, in a book widely regarded as a classic of British literature.

Nights at the Circus is such a classic book, and I would love to know what the book means to you as both reader and artist. Also, how did the project come about?

Sheri Gee, Art Director at The Folio Society, had asked me if I was interested in illustrating a book for them quite a few years ago. My answer was an immediate ‘Yes’; then we decided to wait until the perfect book came up. I think it was clever of them to pair me with Angela Carter as there is a strong magic realist element in both our work.

I had read several of Angela Carter’s books many years ago, including The Bloody Chamber, which resonated with me. I hadn’t read Nights at the Circus, so this seemed like a real gift to me. Also, I hadn’t’ studied’ a book in this way since school!

The challenge for all readers is the sheer volume of characters Angela Carter presents us with. I particularly connected to the strong female characters and their journey both in terms of physical travel and individual growth. The main character Sophie is radical, exciting and funny, causing some controversy amongst feminists when the book was first published. It’s a hugely important and influential book. I’m very touched that I have had this opportunity to connect so deeply with it. 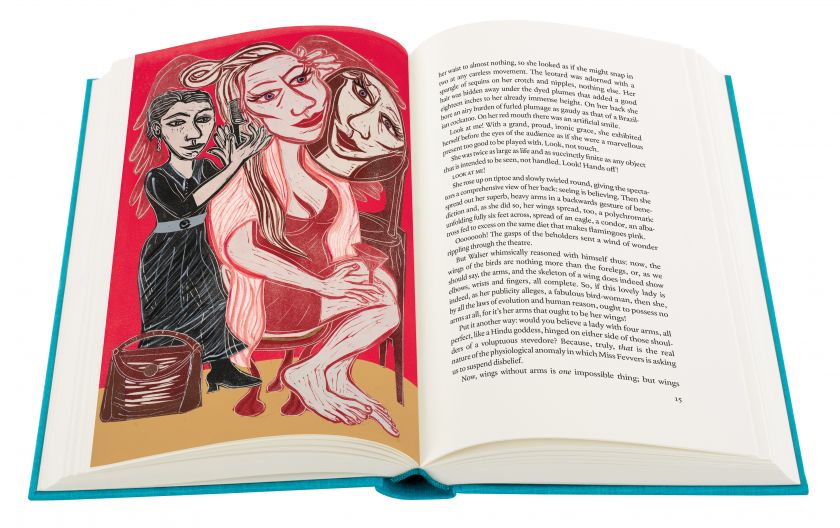 How would you say your pieces capture Carter’s vision?

This is a difficult question. I’m not an illustrator, so being an artist, I bring something to the text which is possibly more controversial than getting an experienced illustrator to do the job. I bring the wealth and depth of my own imagery, built up over 40 years as a practising artist. Perhaps some readers who love the book and know it in detail may take issue with my illustrations.

What do you think the author would have made of the final work?

All I can say is that I was inspired, and I learnt a lot about the book and Angela Carter. I believe she would have responded positively to my work; I’m sure she’d be open-minded and receptive to another creative wholeheartedly embracing her story. I feel very sad that she’s not here to see what I’ve done.

Have you worked with books before? If not, how was the experience for you?

I’m not an illustrator, so this way of working on a brief was new to me. Happily, I was given great freedom and some ‘artistic licence’. In fact, I did several more illustrations than were originally required.

I had previously done some small monochrome illustrations for in 1995, with a full-colour front cover. That was the only other illustration project. 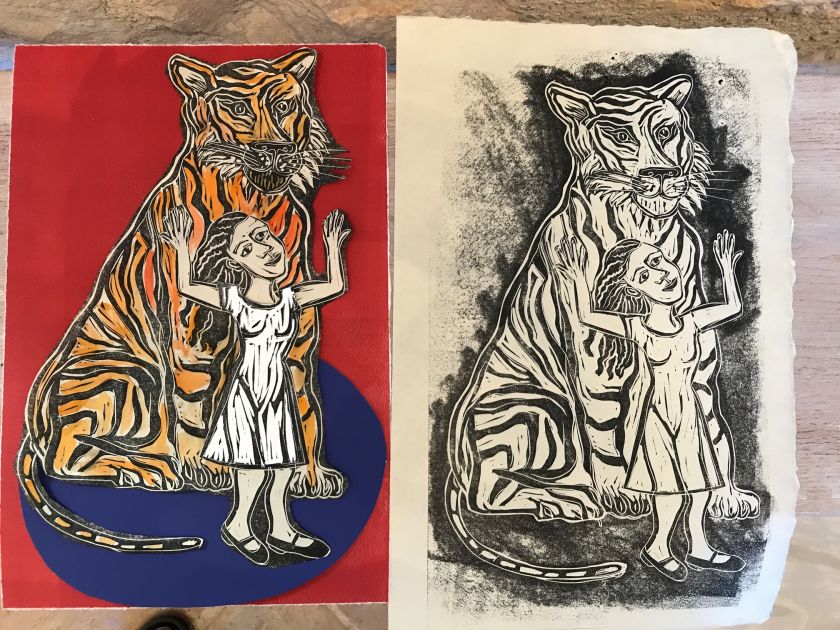 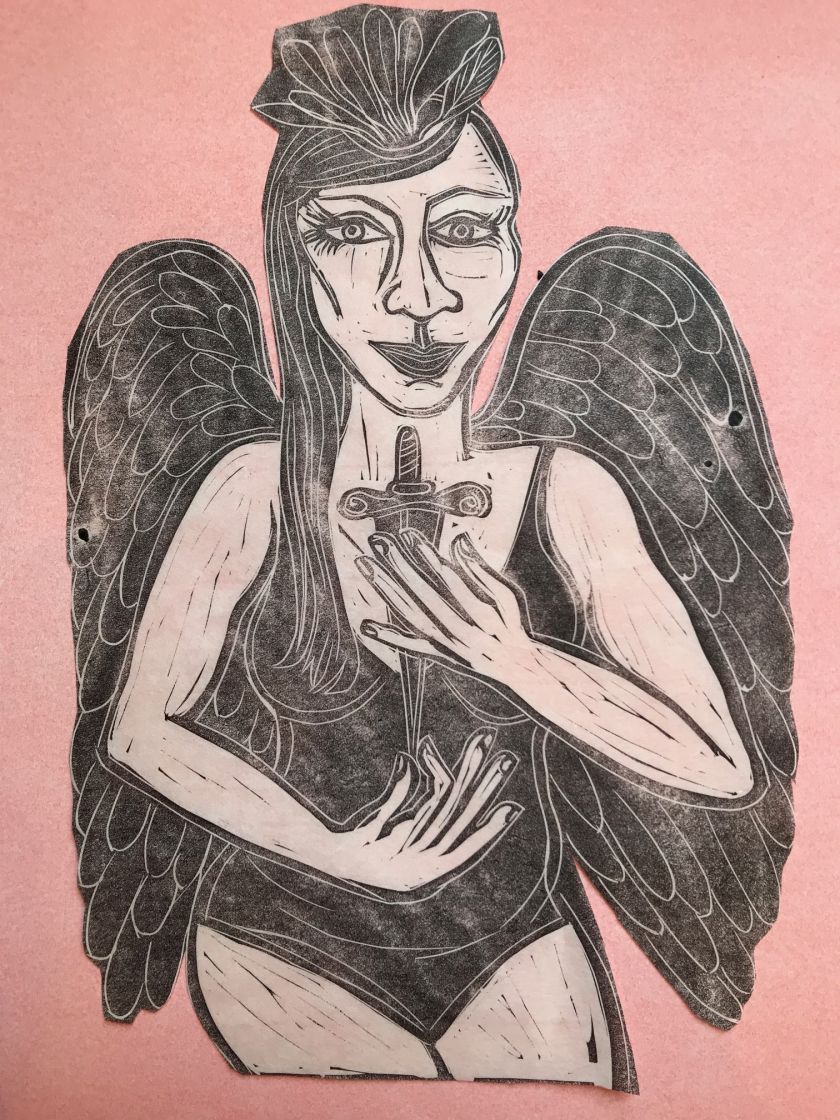 Did that creative process share any similarities with this one?

Actually, the working process was similar to the way I make prints and collages. The Folio Society were keen for me to work in this medium. However, it was very labour intensive with me cutting many individual Lino blocks, involving numerous proofing and printing.

We’d love to know how this all came together.

I describe the method I used as ‘print-based collage’, everything being hand-drawn, then cut in the lino block, printed, later the prints themselves cut again, and assembled. Perhaps it’s best described as a hybrid form of artwork. Sometimes drawing or watercolour were added as the individual collages took shape.

Having agreed on a colour palette with Sheri to fix the book’s look, I set about printing flat colour sheets to use as my primary collage material. I had put aside time in Summer 2019 when I had the use of a studio in France to make the bulk of the illustrations. 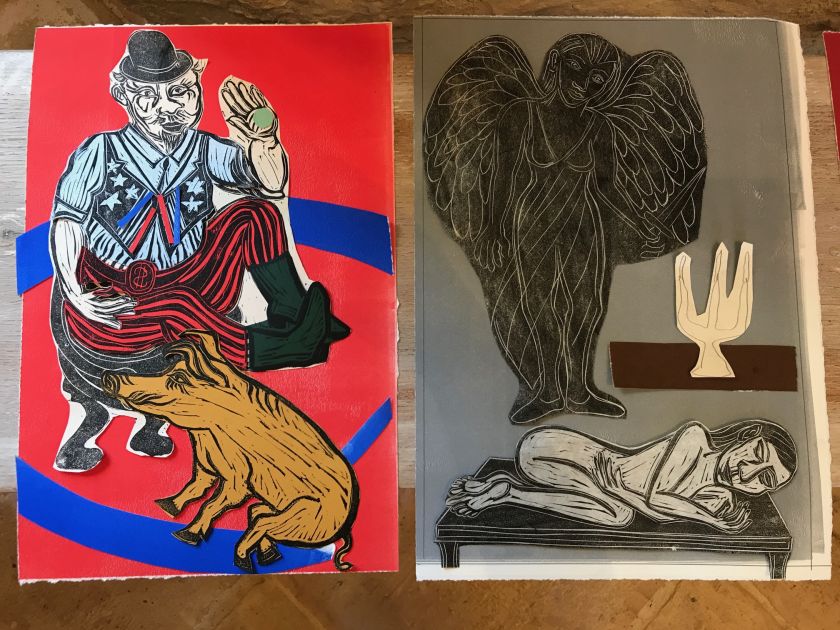 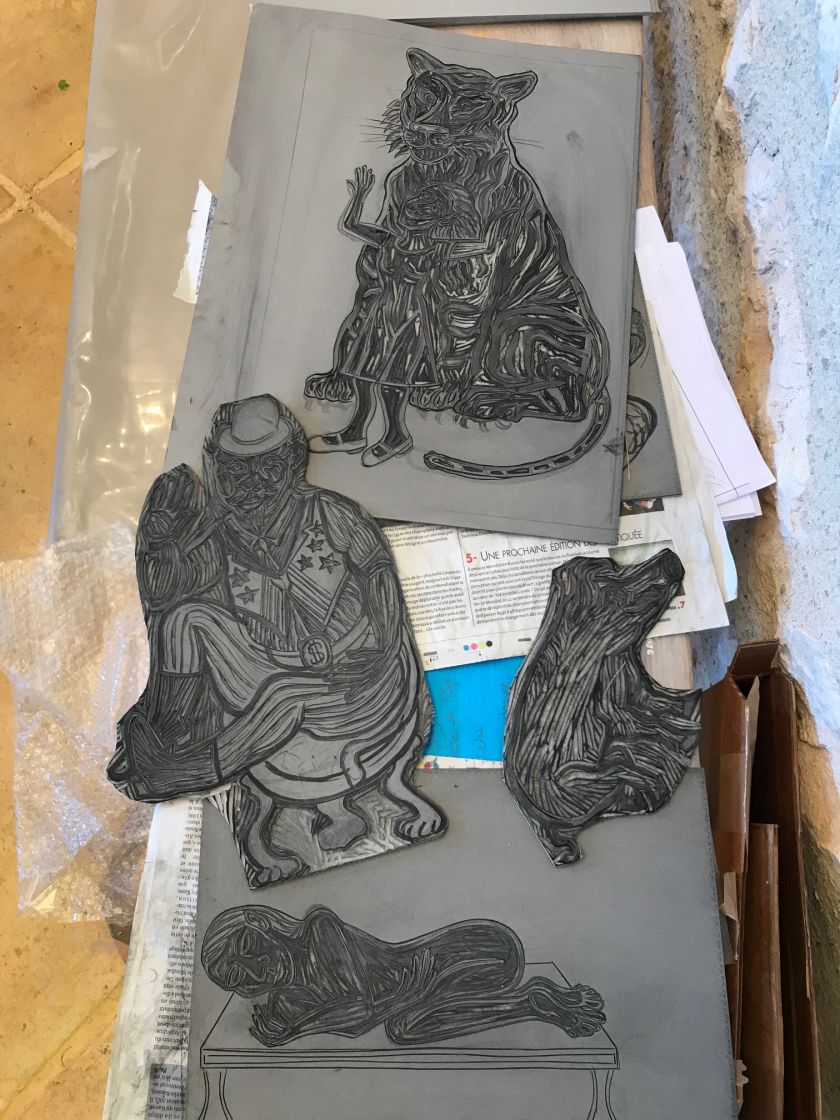 As well as the flat sheets of colour, I also took with me drawing materials, glue, scissors, and a basic printmaking kit, including Japanese papers, Lino blocks, inks and my Lino cutting tools. I always work intensively when I’m interested in a new project. I referred to the book at every stage and was in occasional contact with the Editor. I had great support from the team at the Folio Society. 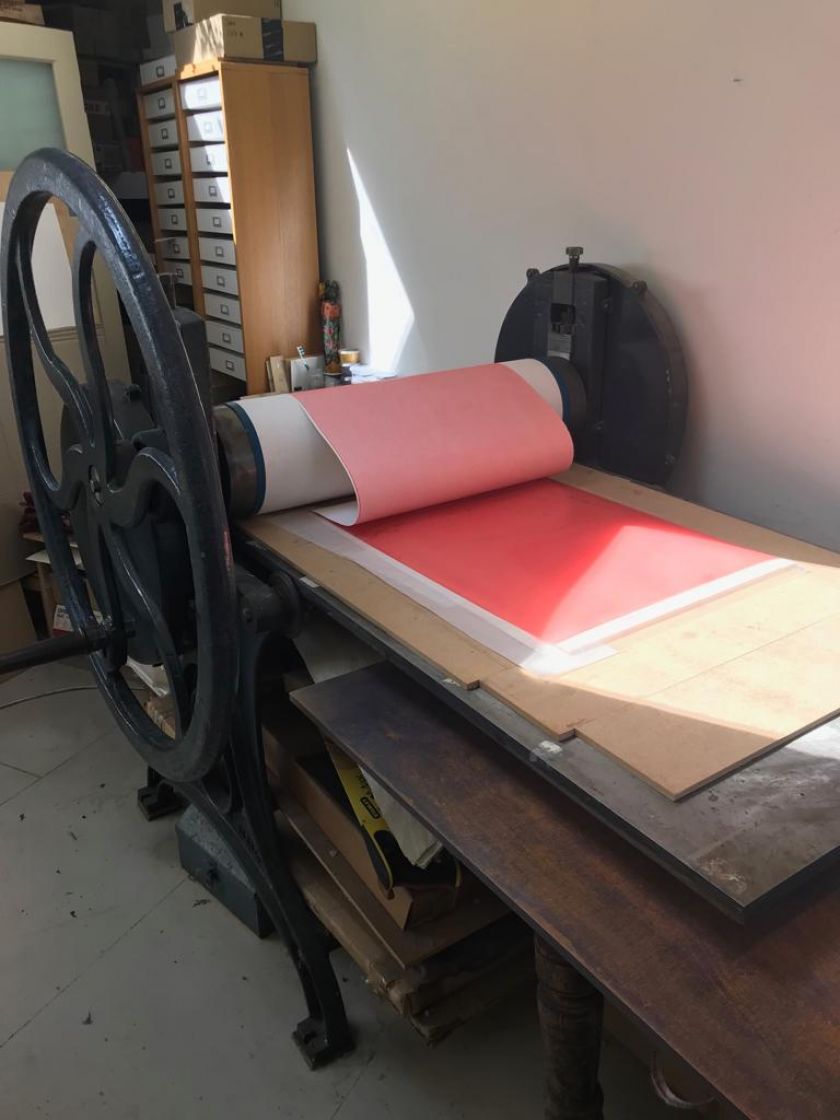 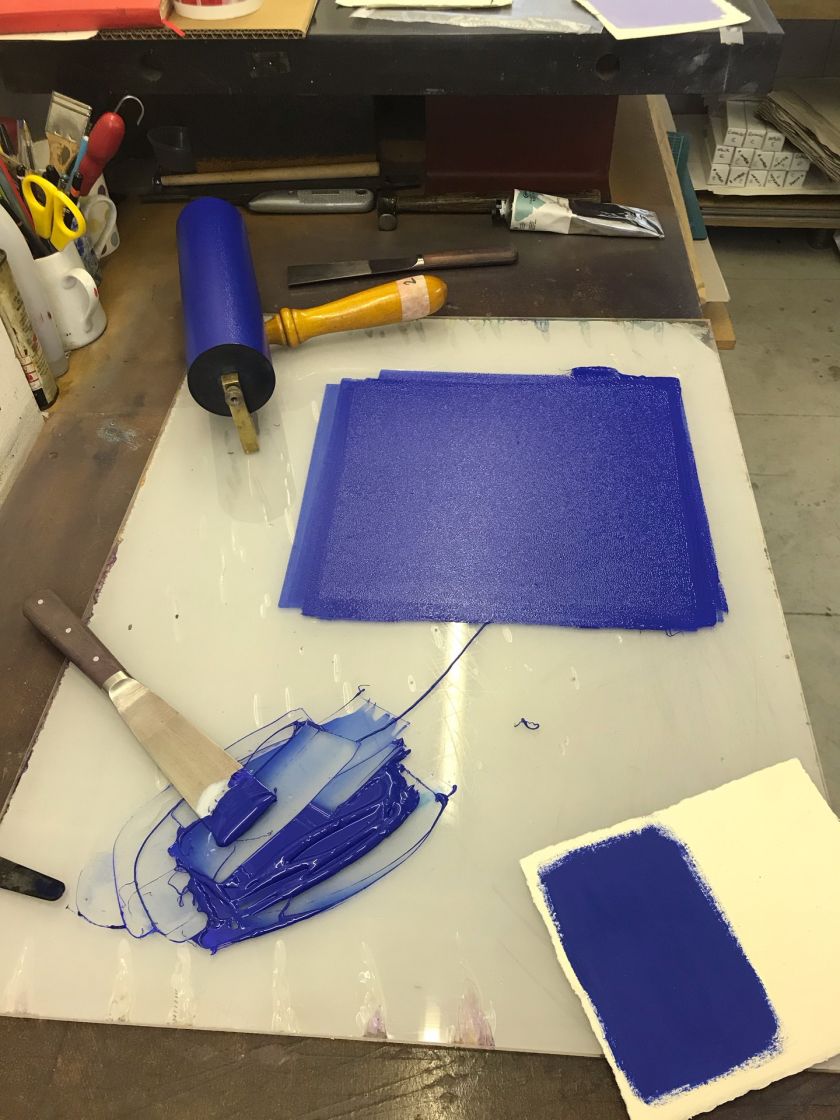 Once the illustrations had been agreed upon, finally, the works were photographed. These were then scanned; I think there was very little post-production needed. However, this part is not my field; all my works are produced in the very hands-on way I’ve described.

, illustrated by Eileen Cooper and introduced by Sarah Waters, is available exclusively from www.FolioSociety.com. ‘Nights at the Circus’, an exhibition of new work on paper by Eileen Cooper presented by Sims Reed Gallery, opens on 4th March to 2nd April 2021. For more information, please visit 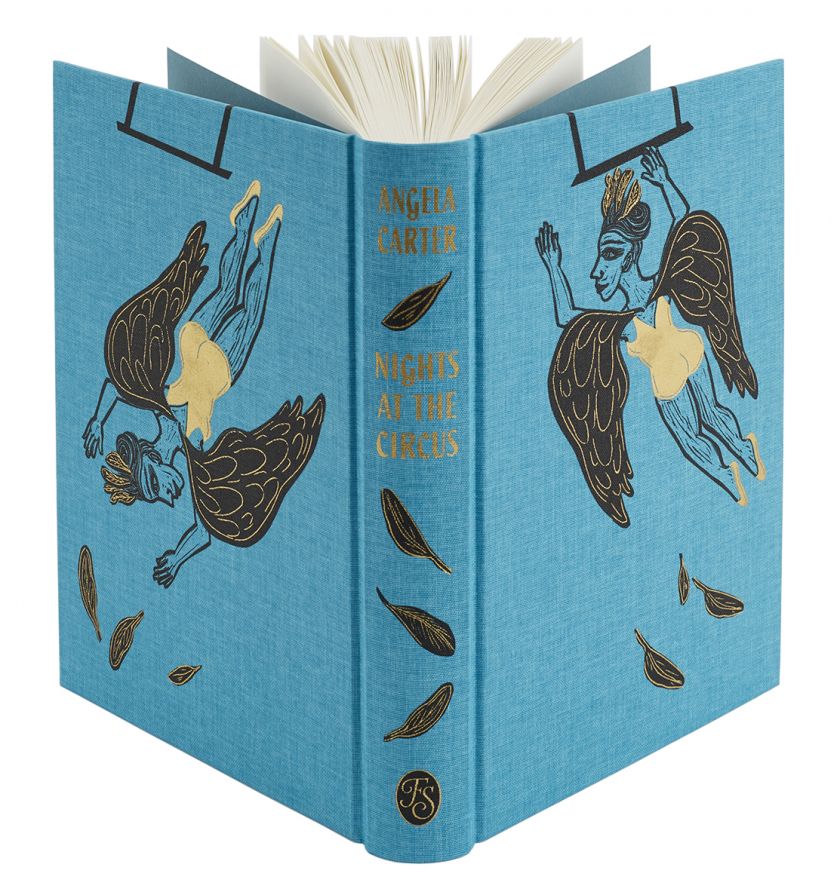