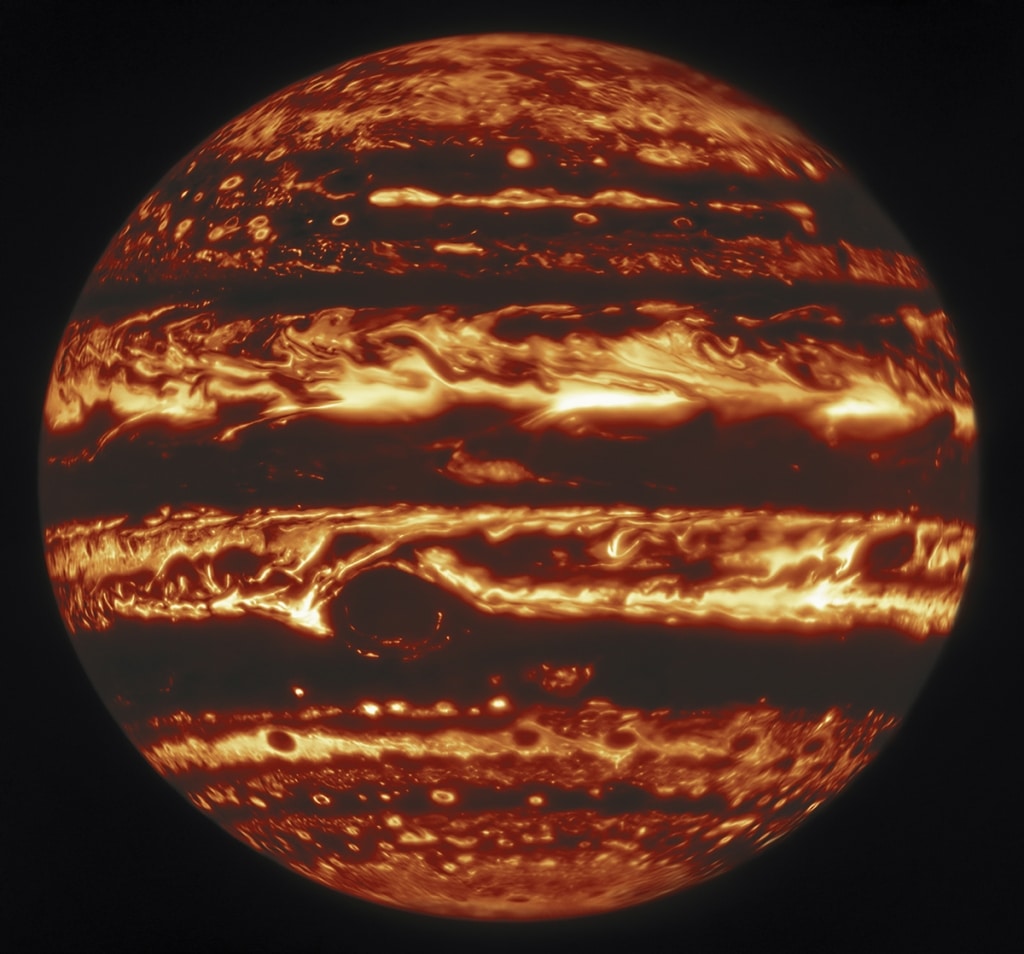 This infrared view of Jupiter was created from data captured on January 11, 2017 with the Near-InfraRed Imager (NIRI) instrument at Gemini North in Hawaiʻi, the northern member of the international Gemini Observatory, a Program of NSF’s NOIRLab. (Photo: )

Jupiter is the largest planet in our solar system. Although 11 Earths could be lined up along Jupiter’s equator, the is a different sort of celestial body. Its atmosphere is composed largely of hydrogen and helium, in which clouds of ammonia and water swirl. These clouds form famous weather patterns—such as the anti-cyclone, high-pressure system known as the Great Red Spot. Continuing a centuries-long effort to understand more about this fascinating planet, the Gemini North Telescope in Hawaii and the both trained their cameras on Jupiter on January 11, 2017. The images—just now released—are stunning.

The images of Jupiter were taken by both NASA and National Science Foundation’s NOIRLab. Most familiar to us is the image of Jupiter under visible light—wavelengths which can be seen by human eyes. The cream-colored planet shows streaks of red and green. It was captured by the Wide Field Camera 3 on the Hubble Space Telescope. The image is in fact a composite of three shots—each with a narrow-band filter which limited the light to wavelengths within red, green, and blue respectively. Brought together, the visible light images allow a stunning glimpse into the swirling surface of the gas planet. 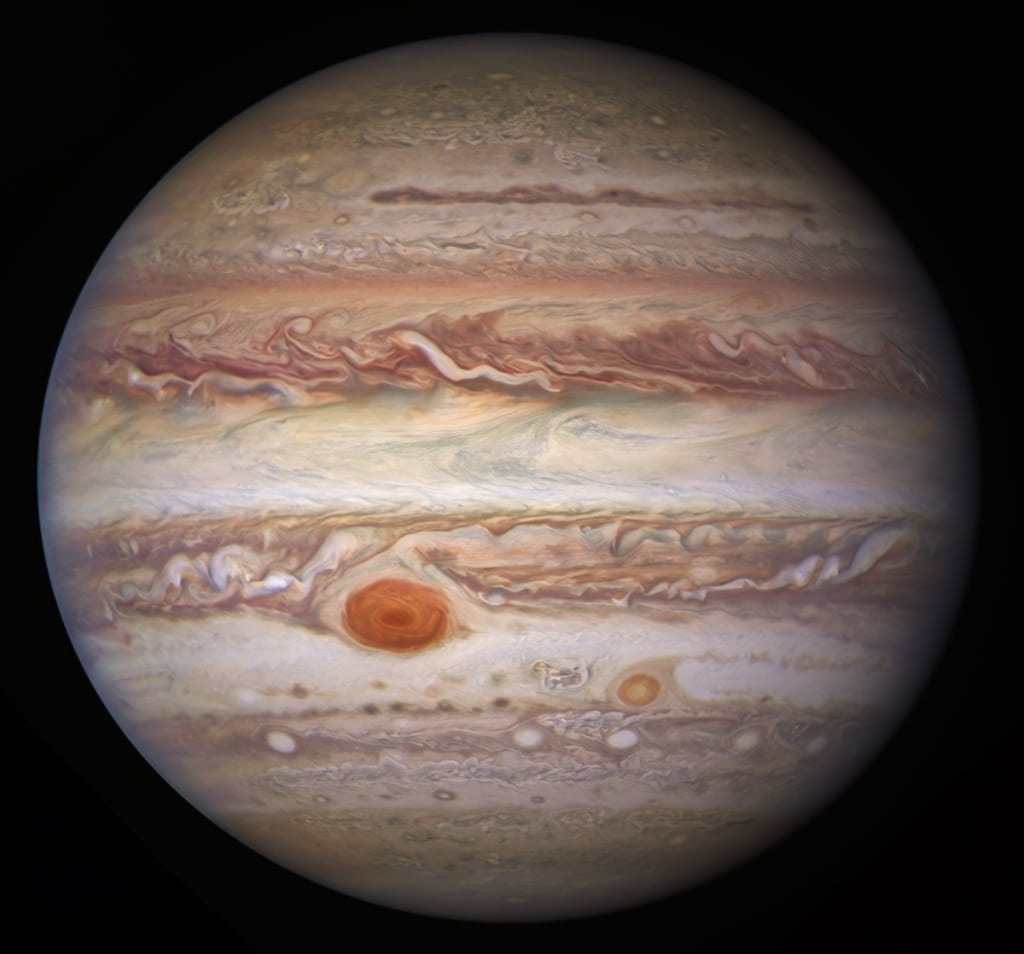 Visible on the surface is Jupiter’s famous Great Red Spot. This weather event on the planet is larger than Earth and has existed for centuries. It is a high-pressure system of anti-cyclone. This is the opposite of a cyclone (think tornado) here on Earth. In 2000, another storm formed near the Great Red Spot. Known as Oval BA, or Red Spot Jr., this spot appeared from the merging of three storms. While it often appears red like its larger counterpart, scientists are not entirely sure why. The red color comes from chromophores (color-bearers) in the clouds, but scientists remain unsure exactly what these might be. What is known is the wide variety of volatile —from lightning to convective towers (thunderheads) to deep water clouds.

Scientists can learn more about the weather events and the by comparing the planet under visible, infrared, and ultraviolet light. In a , the NSF’s NOIRLab calls this “multiwavelength astronomy,” explaining that “viewing planets and other astronomical objects at different wavelengths of light allows scientists to glean otherwise unavailable insights.” Two images were released to compare with the visible light rendering. One is infrared—specially taken at a wavelength of 4.7 microns, known as thermal infrared. The other is ultraviolet—wavelengths too short for human eyes to see.

In the infrared image, Jupiter appears like a swirling ball of fire. The image is a composite mosaic of shots from the Near-InfraRed Imager (NIRI) instrument at Gemini North in Hawaii. Warmer areas appear bright, cooler regions appear darker. The cooler regions often indicate more cloud cover. The heat from the lower atmosphere is obscured by these clouds. The Great Red Spot, too, appears dark—suggesting a cool storm. 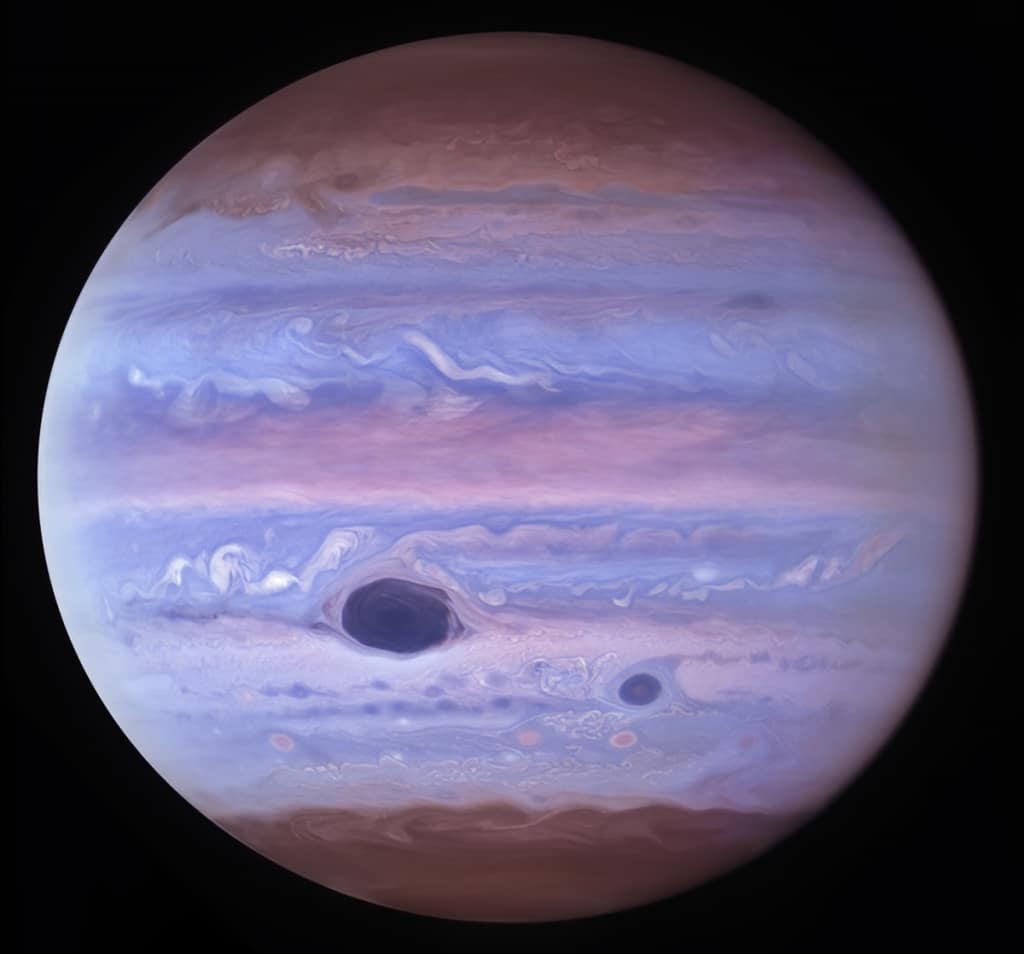 This ultraviolet image of Jupiter was created from data captured on 11 January 2017 using the Wide Field Camera 3 on the Hubble Space Telescope. The Great Red Spot and Red Spot Jr. (also known as Oval BA) absorb ultraviolet radiation from the Sun and therefore appear dark in this view. (Photo: )

The comes from the Hubble Telescope. A hazy upper atmosphere—especially near the poles—limits what we can see. Over the Great Red Spot and its junior companion, dark sections indicate that the UV light (which is radiation from the sun) is being absorbed, rather than bounced back to the camera censors. This tells scientists that the color-bearing particles—or chromophores—absorb UV waves. This is only a brief example of how much scientists can observe and learn from synoptic observation—the simultaneous documentation and observation of a phenomenon. To compare the three views of Jupiter for yourself, check out the handy . 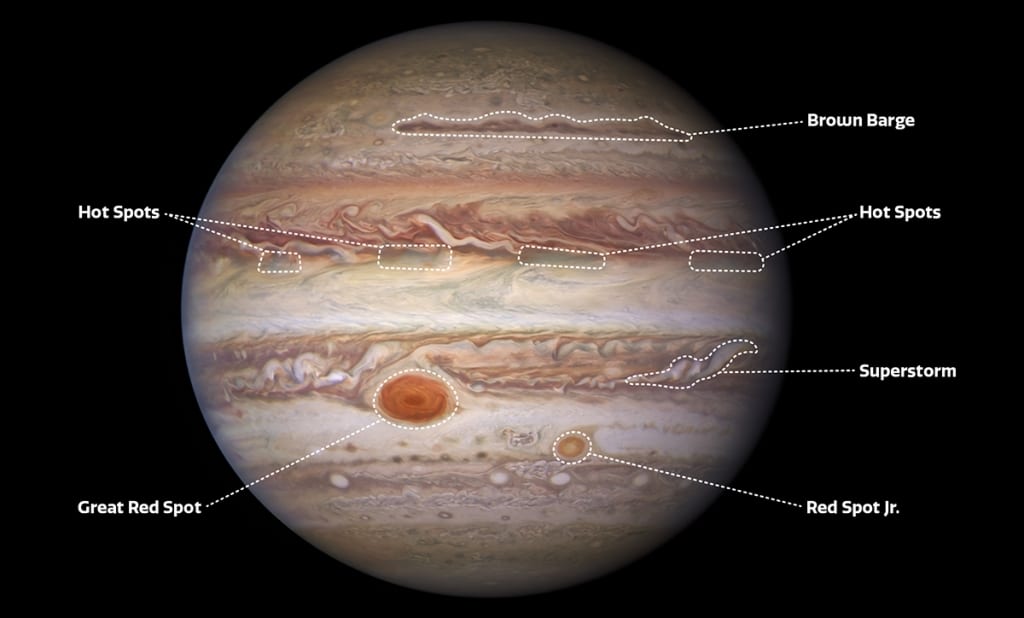 Explore these images of Jupiter to see the clouds under different radiation. 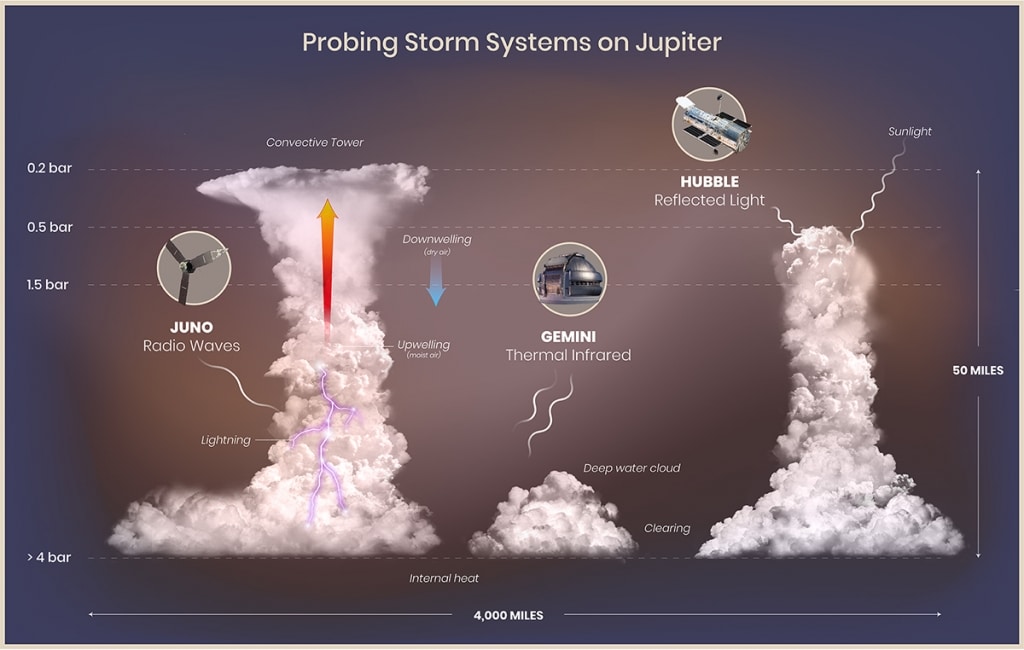 This illustration of lightning, convective towers (thunderheads), deep water clouds, and clearings in Jupiter’s atmosphere is based on data collected by the Juno spacecraft, the Hubble Space Telescope, and the Gemini Observatory. (Photo: )