Family of Five Bears Is Discovered Hibernating Under California Home 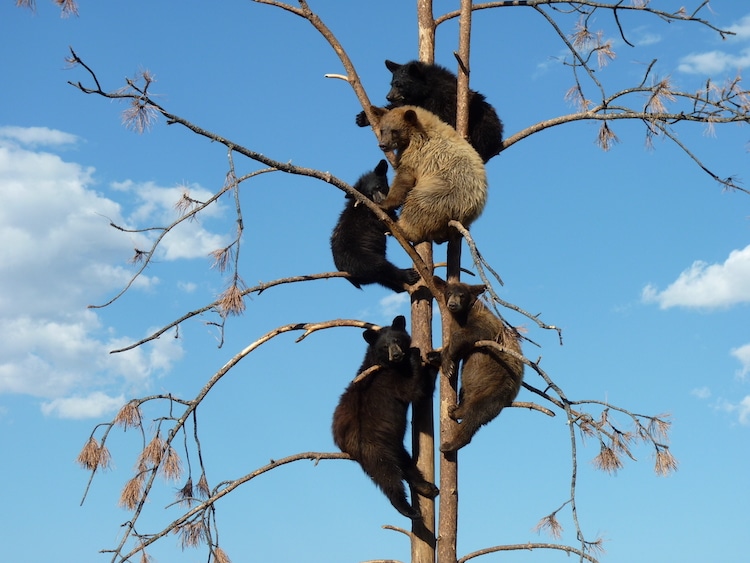 Every year, bears go into hibernation during the cold, winter months, only emerging when spring rolls around. And while most bears make their den somewhere outdoors, others find a home closer to where humans live. Recently in Lake Tahoe, California, a family of bears was discovered hibernating underneath a resident’s house.

A mother black bear led her four cubs—one of which was an orphan that she adopted—into an empty crawl space underneath someone’s home. There, they remained undetected for several months, snoozing contentedly and shifting around to keep warm. “When it came time to go to sleep for the winter she found a house with an unsecured crawl space opening and ushered all the kids inside and told them to be quiet and go to sleep,” the BEAR League . “It was a home where people lived and they thought they heard some odd rumbling, snoring-like noises but ignored it because it simply didn’t make sense…and the neighbors said they were imagining it because they didn’t hear anything.”

When some of the bears woke up and began making movements under the house, the residents called the , which is a non-profit organization committed to keeping bears safe. “We un-invited mama bear, not yet aware that there were four more bears under the house,” they continued. Lake Tahoe residents are accustomed to visits from black bears, who are indigenous to the area. Between 100 and 150 bears try to hibernate under homes every year. “It was quite the scene to then watch the four yearling cubs emerge from the opening and join together on the other side of the fence to venture forth into 2022.”

A mama bear and four cubs were discovered hibernating underneath a house in Lake Tahoe, California.

All images via the BEAR League.