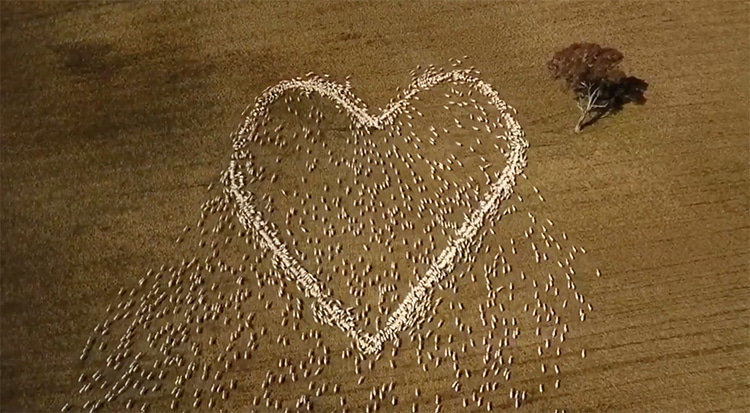 Memorializing a loved one can be a helpful way to process grief. One sheep farmer has recently used his herds as a paintbrush to sketch a special monument to his aunt across his fields in Gurya, New South Wales, Australia. When Ben Jackson’s Aunty Debby passed away after a two-year battle with cancer, he could not attend her funeral due to pandemic restrictions. Instead, he created a sheep “heart” as an expression of love and grief.

Jackson was disappointed when he was unable to both see his aunt before her passing and attend her funeral due to local pandemic travel restrictions. In his place, he wanted to send a video message to her funeral in Brisbane. “At those times of grief, you feel really helpless, you don’t know what to do, what to say,” he told .

Jackson found his expression of love and grief through his sheep herds. He had previously experimented with “shaping” the herds into the names of his favorite bands as seen from on high. For his aunt, he chose a heart design. To shape the herd of ewes (many of whom are pregnant), Jackson typically uses a truck to lay down grain along the outline of his design. The ewes are then released into the field, where they hungrily run to munch along the lines of feed. Jackson captured video of the feeding ewes from above using a drone as the heart appeared from the herd.

The “sheep art” heart went viral in Australia and around the globe. This impressive feat and touching tribute has spoken to many struggling with grief. Jackson told the , “It took me a few goes to get it right…and the final result is what you see…That was as close to a heart as I could get it.” He added to a local news outlet, “I just hope that when I did it, she was having a peep through the clouds and was able to see it.” Certainly, Jackson’s love for his aunt has already spread around the globe.

A sheepherder in Australia expressed his grief and love after the passing of his aunt with a herd of sheep forming a heart.