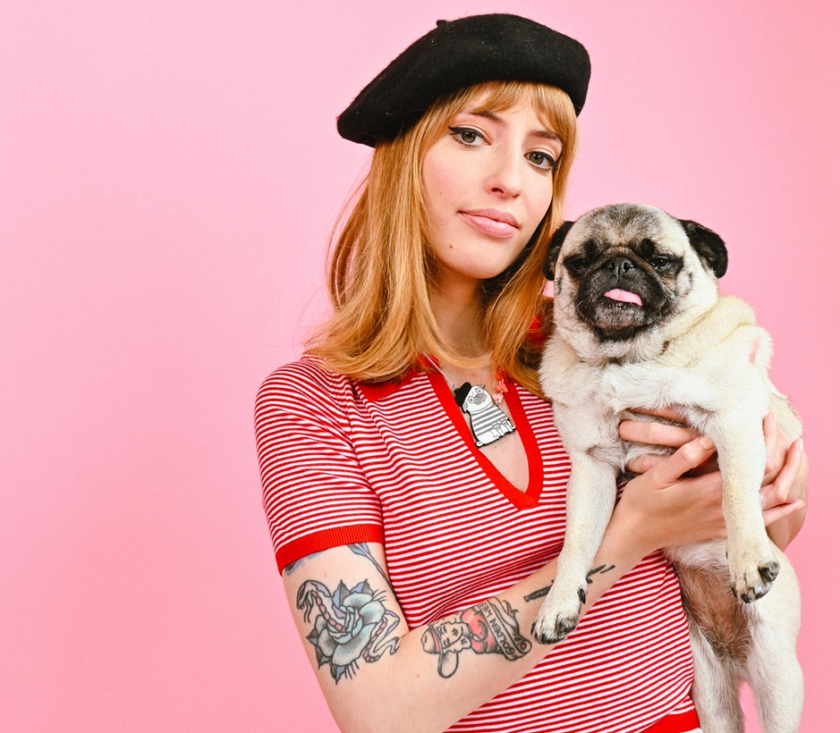 Tatty Devine has collaborated with pug enthusiast and illustrator on a new range of jewellery that sees some of her most iconic artworks transformed into necklaces and brooches, including the ‘Nope’ and ‘Pugs Not Drugs’ pieces that arguably launched her career over a decade ago.

An award-winning, household name and renowned for her cartoons dealing with everything from mental health, feminism to her love of animals, ‘s work has a child-like quality but with a voice and message that everyone can relate to. And now you can wear them with pride with a new collection by .

The jewellery brand, which was founded by Chelsea School of Art graduates in 1999, has carefully translated Gemma’s hand-drawn pen and ink illustrations into multi-layered, hand-inked wearable items. From dog-lovers to feline fans, there’s something for everyone. 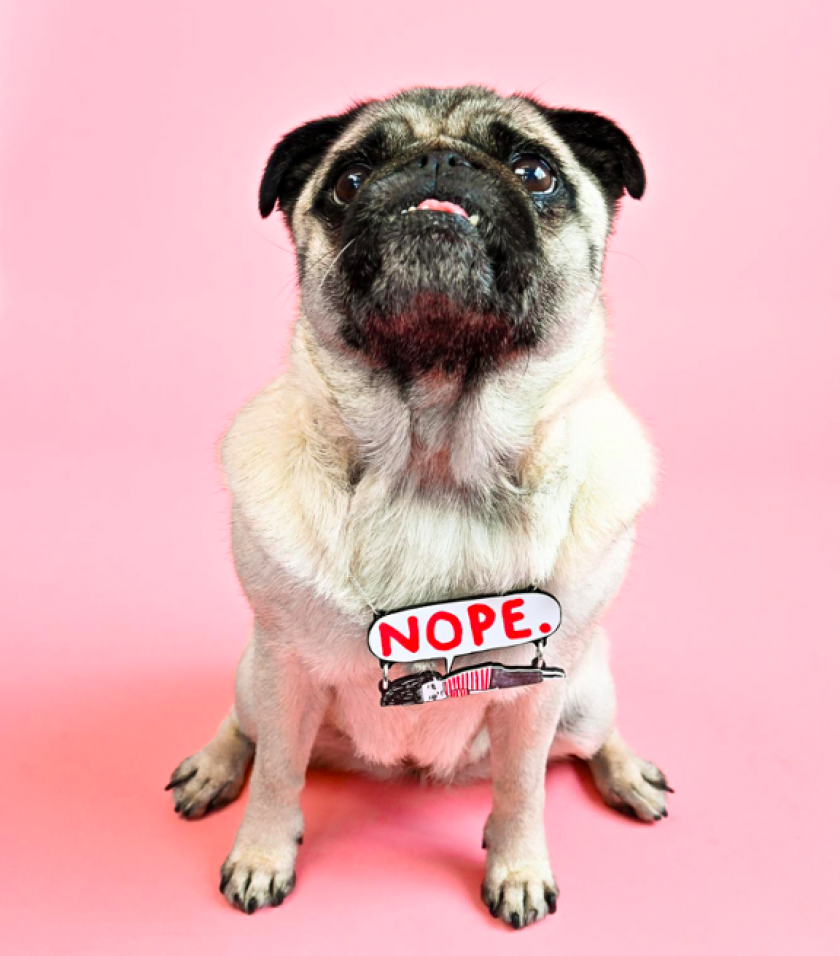 “I have been a fan of Tatty Devine since I was a teenager so I’m still pinching myself that I’ve made a collection with them,” Gemma tells Creative Boom. “In my mind, jewellery is perfect for introverts. Personally, I dress quite simply – I essentially wear some variation of a Breton top and black jeans every day – but I like to add little touches like novelty brooches and earrings. It’s enough to show my personality but not so much that it draws a lot of attention to myself.”

The collection has been designed in London by Creative Director Harriet Vine and handmade in small batches in Kent by an all-female team. Was it difficult picking out which illustrations to turn into jewellery? “I am quite indecisive so I initially had a hard time choosing but Harriet suggested that we go for a ‘Best of’ collection with some of my most popular designs, which helped to narrow it down quite a bit. Of course, we had to have some dogs and cats in there – and specifically, pugs! ‘Nope’ is one of my all-time most popular designs and I think speaks to a lot of people, so we were keen to make that into a statement wearable piece. Harriet was wonderful at figuring out the ways in which each artwork would work best as a piece of jewellery. I’m very excited about the collection.” 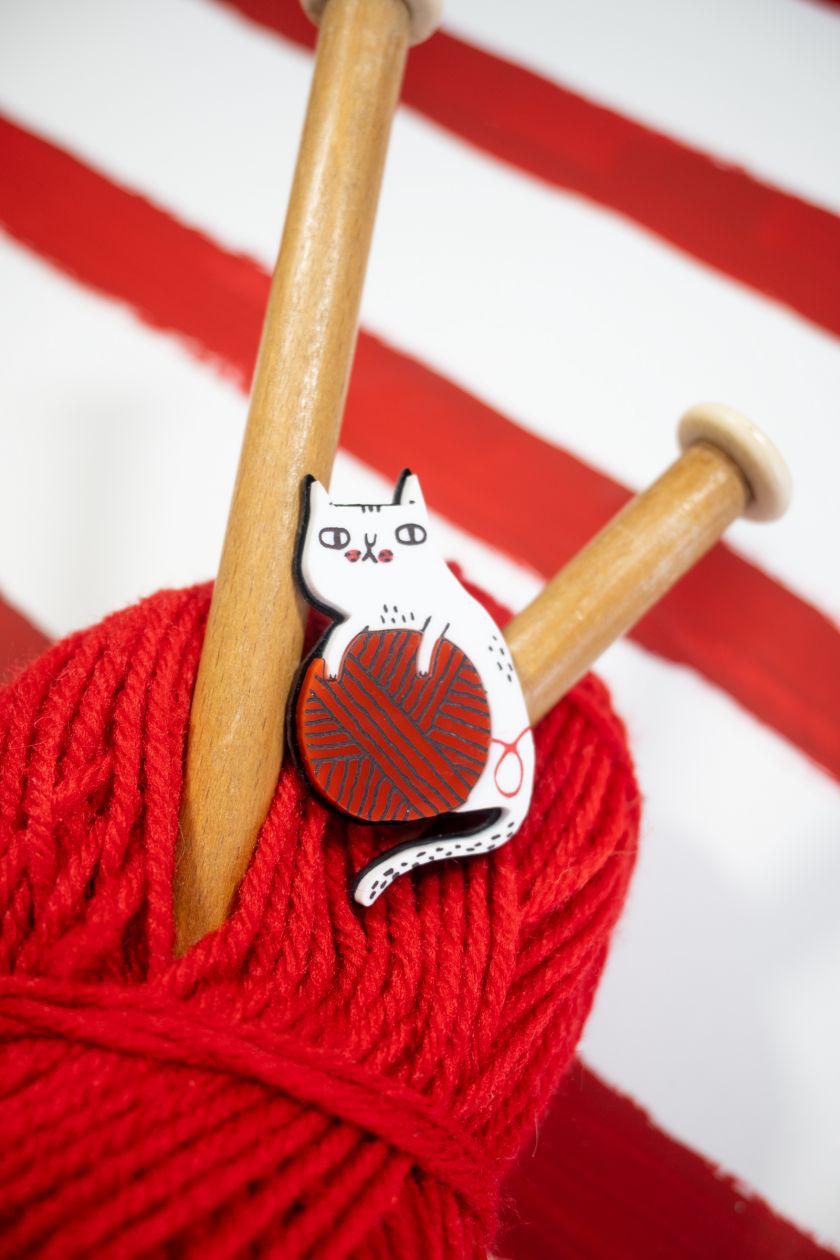 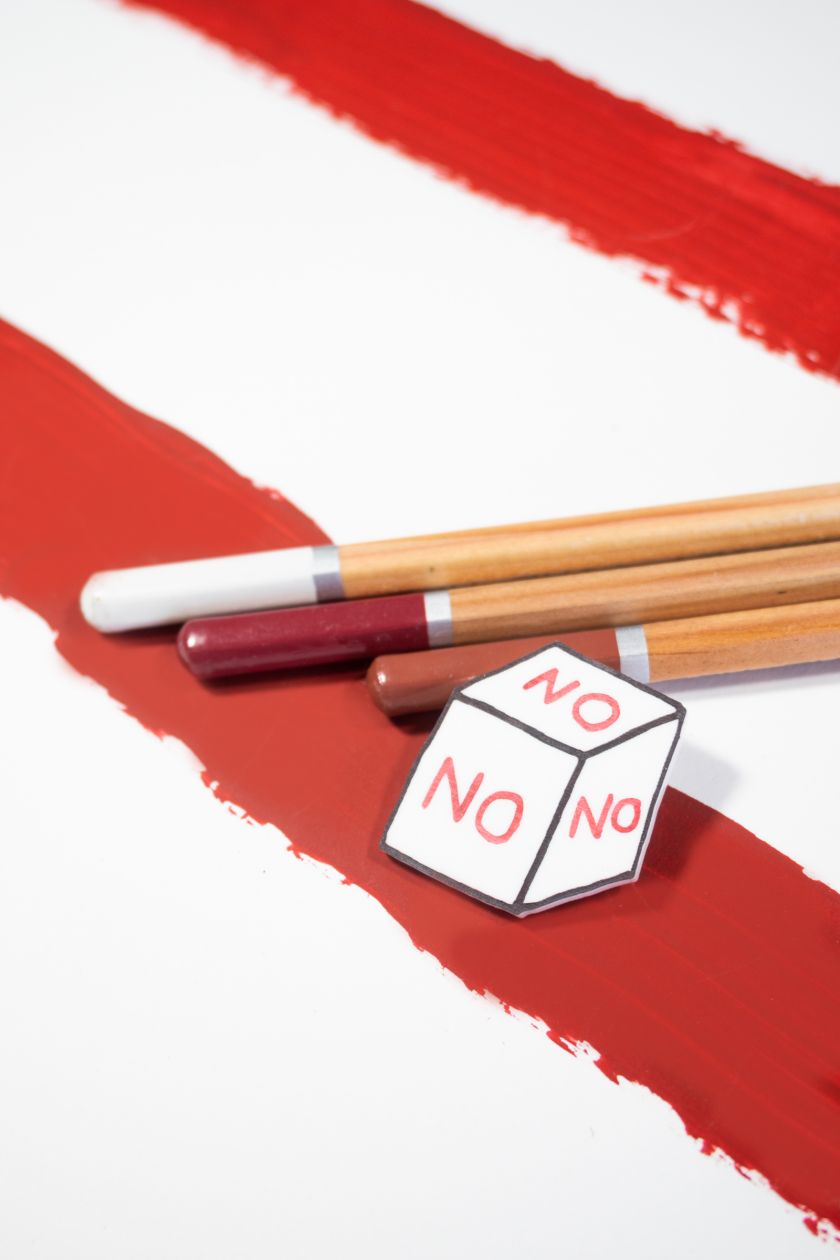 One highlight piece, which happens to be Gemma’s favourite, is the ‘I Like You’ necklace. “I’ve wanted to make something like it for a long time. I created an artwork on the same theme maybe 10 years ago, probably around the time of my first show at Tatty Devine Brick Lane.” She also loves ‘Graham is a weirdo!’, explaining that: “Maybe I’m just immature but a necklace featuring dogs sniffing each other’s bums is highly amusing to me.”

This is not the first time Gemma has worked with Tatty Devine: in 2011, she had a small exhibition at its Brick Lane store and gallery. A decade later, Tatty Devine will be exhibiting a series of prints by the illustrator, also available to purchase, at its Covent Garden store. And to launch the collection, Gemma herself will be in-store drawing pet portraits and signing postcards and prints today, 14 October, where you’ll be able to bring your own pug for treats.

A freelance illustrator, originally from the UK, Gemma Correll is now based in Fullerton, California. A graduate of the Norwich School of Art and Design, her work has a strong narrative basis and she specialises in hand-drawn comics and character design. Gemma has published several of her own books and illustrated numerous children’s books, including the Pugly series by Pamela Butchart. 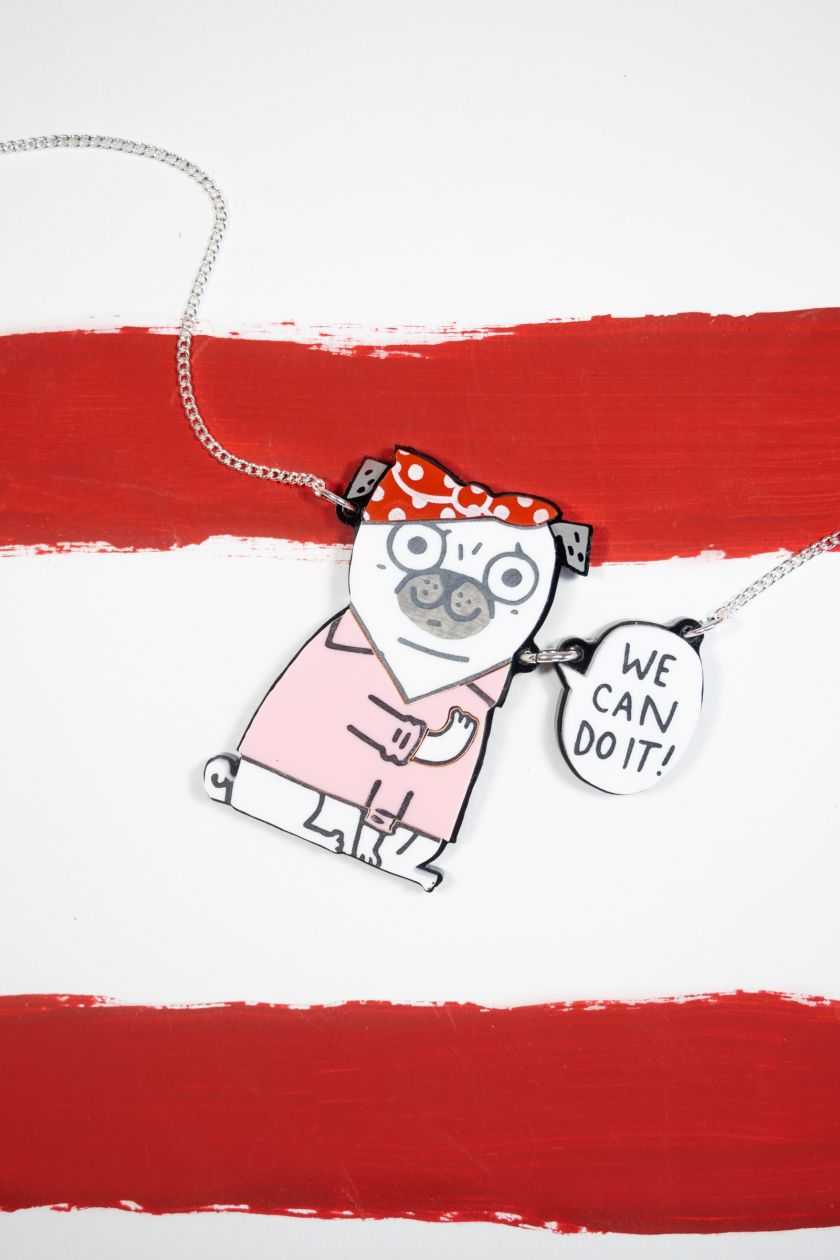 We Can Do It necklace © Gemma Correll X Tatty Devine 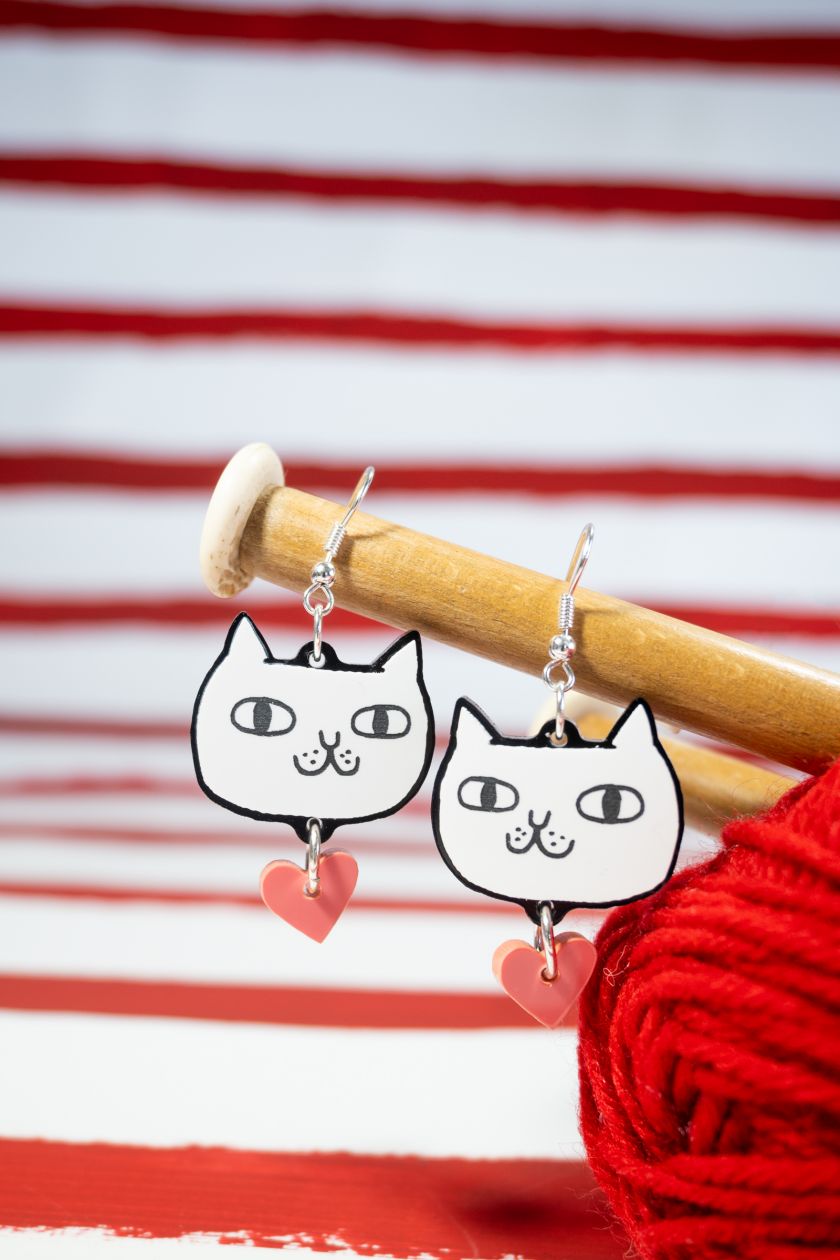 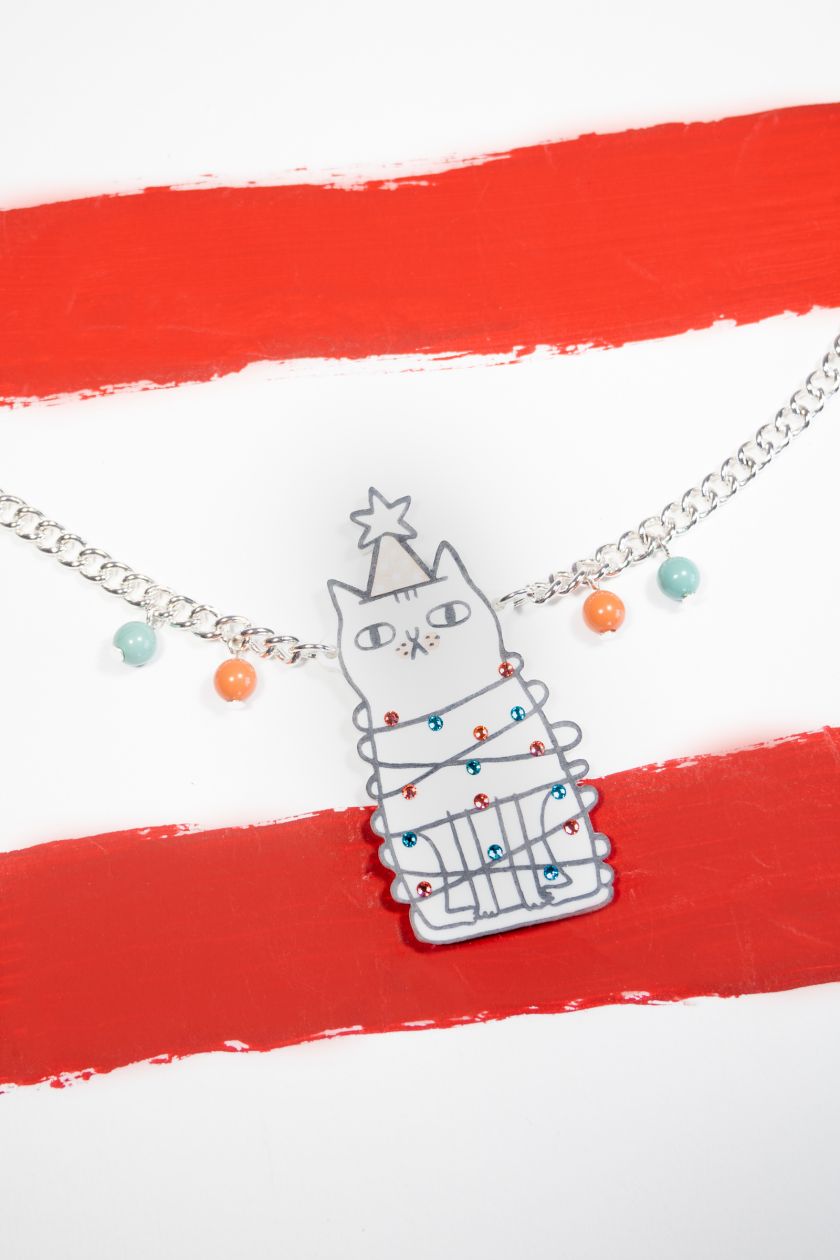 Does she still have pugs herself? “I do! I currently have two – Mr Pickles and Bean, and a chug called Zander. Mr Pickles is 11, he has been around since the ‘Pugs Not Drugs’ days and has been my muse for many years. He is a grumpy old man now, although he has always been a bit grumpy, and he only has one eye these days but he is as snuggly and adorable as ever. Maybe even more so.”

“Zander was found on the streets of LA County as a stray,” continues. “We weren’t sure of his breed but we did a DNA test and found out that he’s mostly pug and chihuahua with the surprise additions of poodle and Pekingese. He is a very sensitive mummy’s boy. Bean is the latest addition to the grumble. She is a three-year-old and has a lot of energy and funny quirks – a typical black pug! She came from Las Vegas and was rescued by Pug Nation in LA. I can’t imagine my life without pugs.”

Gemma Correll’s exclusive collection with Tatty Devine will launch today. Visit to find out more or follow for updates on .