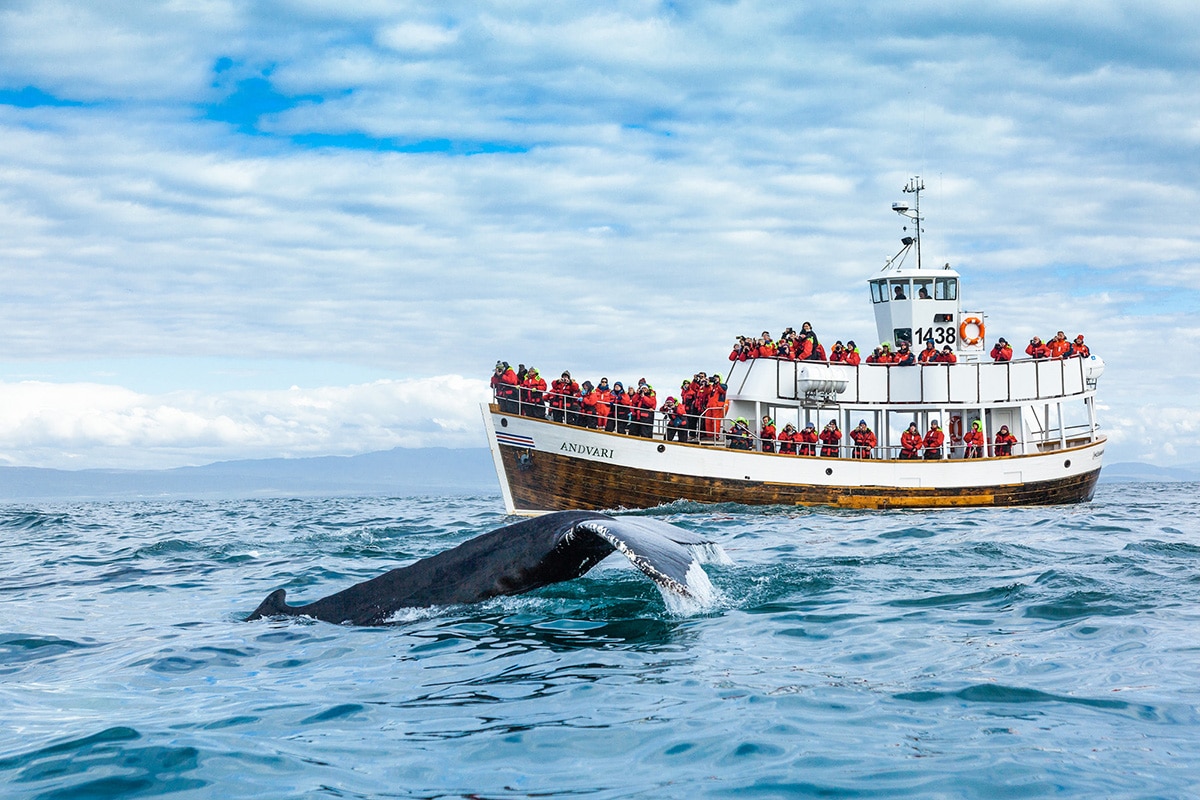 The electric boat Andvari on a tour. (Photo: )

Whale watching can be a magical experience. There are few animal experiences which can match watching a whale breach or breeze by with a curious calf. However, whale watching boat tours—like many other activities—are not environmentally neutral. Standard fuel-based engines produce carbon dioxide emissions. The noise of these engines can also be disrupting to the local ecosystems, whales included. A family-owned Icelandic whale-watching company has the answer—silent electric boats. of Húsavík in northern Iceland offers carbon-neutral tours on their beautifully outfitted electric boats which both tourists and whales seem to appreciate.

Founded in 1995, North Sailing changed the way Húsavík approached their local whales. Iceland has a history of whale hunting, but North Sailing wanted to take a gentle approach to appreciating the large creatures which populate the Skjálfandi Bay. These species include blue, fin, humpback, and minke whales, as well as white-beaked dolphins. Other species make appearances such as sperm whales and puffins. North Sailing’s tours were one of the first whale watching tours to be offered in Iceland and helped to refocus the whales as friends not food. Now about 100,000 tourists visit Húsavík each year to see the sea creatures.

Although the company has always been environmentally conscious, North Sailing set out to create their first silent electric boat six years ago. The team converted their antique 1951 schooner named Opal to an electric engine which uses Iceland’s supply of entirely renewable hydro and geothermal energy. This adaptation gave the sailboat two carbon neutral options—sails when there is wind and a clean engine on still days. Since this first foray into clean energy boats, North Sailing also converted a traditional oak wood boat named Andvari. The Norse name Andvari means “a silent breeze that glides silently through the air.”

The silent whale watching tours aboard Opal and Andvari have been a hit with tourists and—it seems—the whales. Phoebe Smith reported for on her own experiences on the ships: “I noted that the whales seemed to linger longer alongside ours [the boat].” This could be very true, as scientists have noted . Smith noted that the captain reported fewer headaches with the quiet boats—the boat operators reported that while customers do not have to remain quiet, the atmosphere is often one of calm joy. The cinnamon buns and hot chocolate handed out on the way home also offer the perfect end to the experience.

North Sailing has a fleet of antique boats in addition to their silent electric options. Whether you choose the Original or the Silent Whale Watching, you will find yourself encountering the beauty of Iceland’s waters and its curious inhabitants. No matter what boat you take, know the company is dedicated to carbon offsets through the Kolviður—Icelandic Carbon Fund. So far, they are responsible for the planting of 15,000 trees. The company has even offered its innovative blueprints for its eco-friendly ships to other whale-watch companies, who one can hope will make similar changes in future. North Sailing is truly thinking about the whales and the future of eco-tourism. 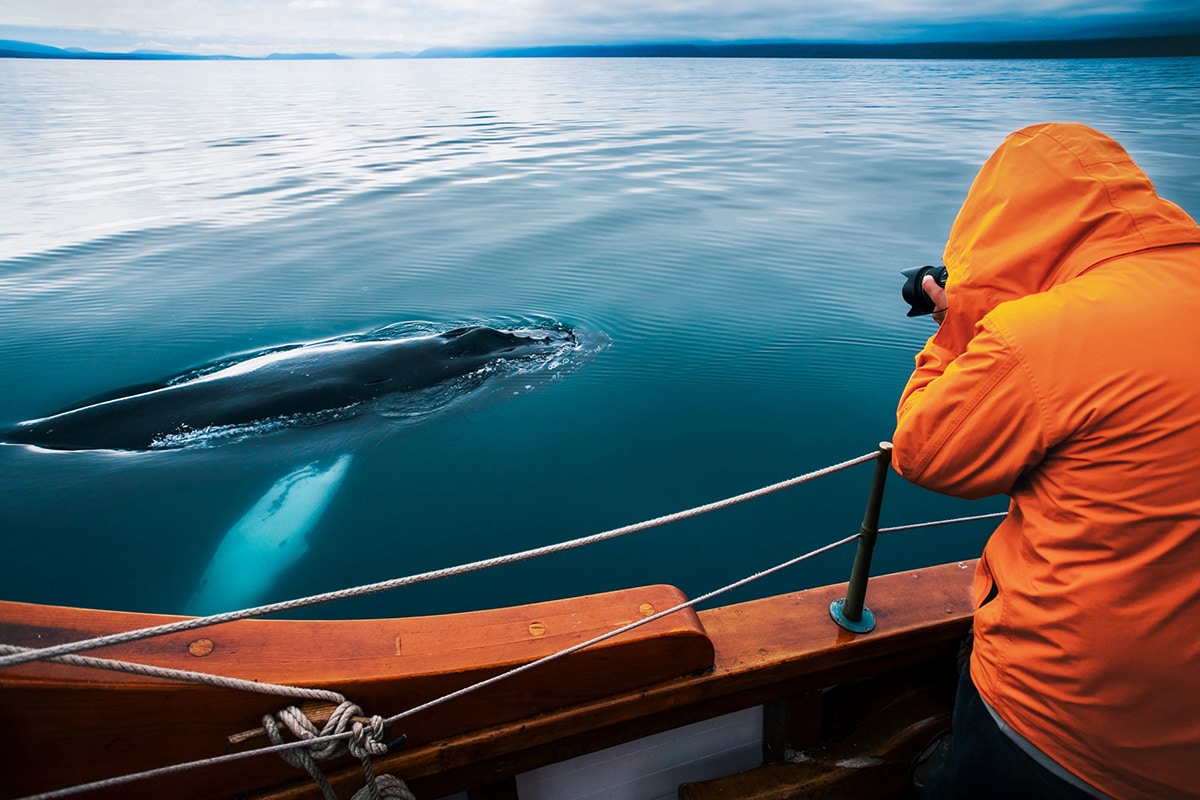 The Húsavík, Iceland-based company was the first whale watch company in Iceland. 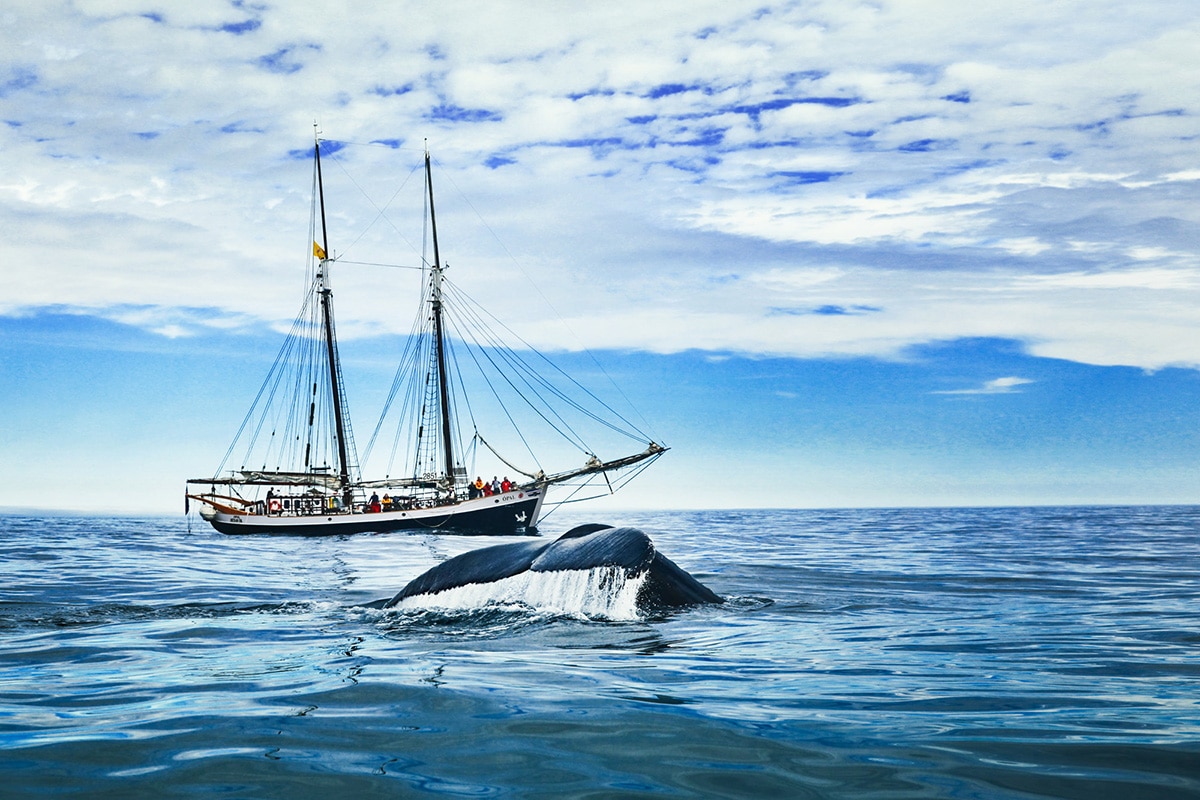 A humpback whale fluke in front of the hybrid-electric sailboat Opal. (Photo: )

Opal and Andvari are the names of the two electric-powered boats in the fleet of antique schooners and fishing boats used by the company. 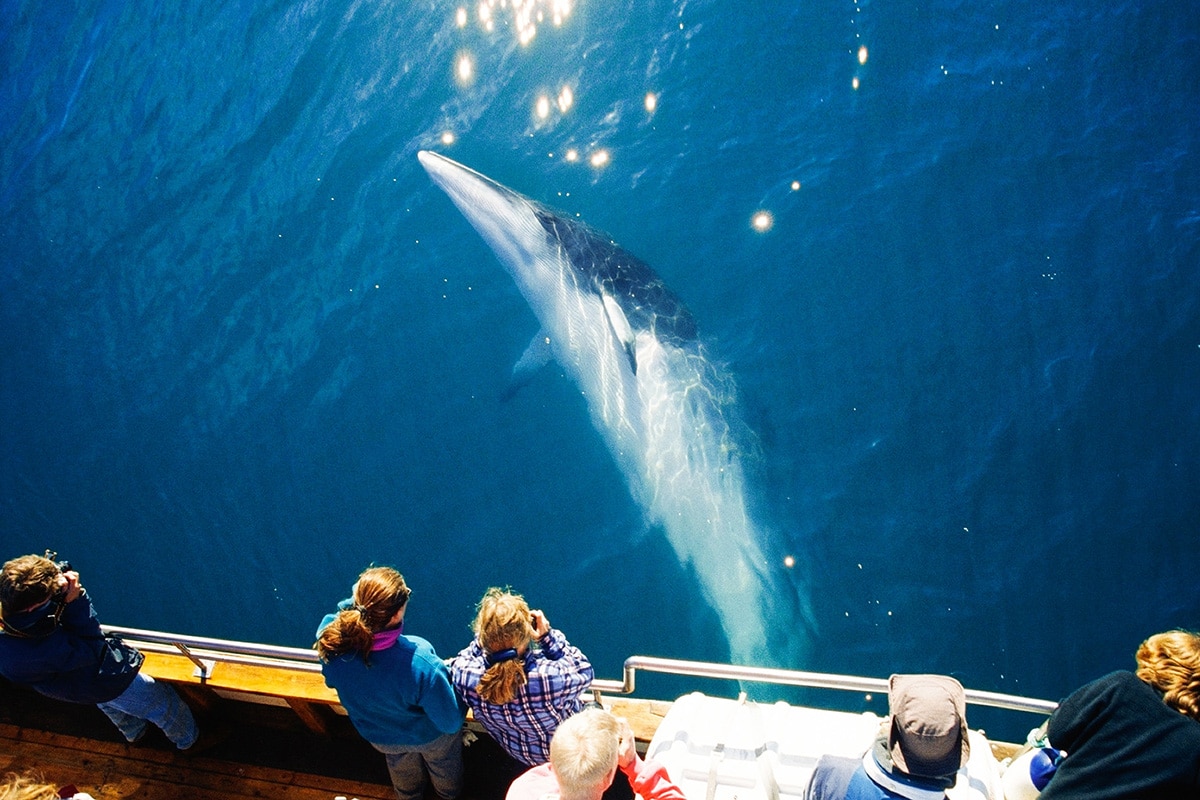 It seems the whales may appreciate the silent tours, as whales seem to prefer quiet waters. 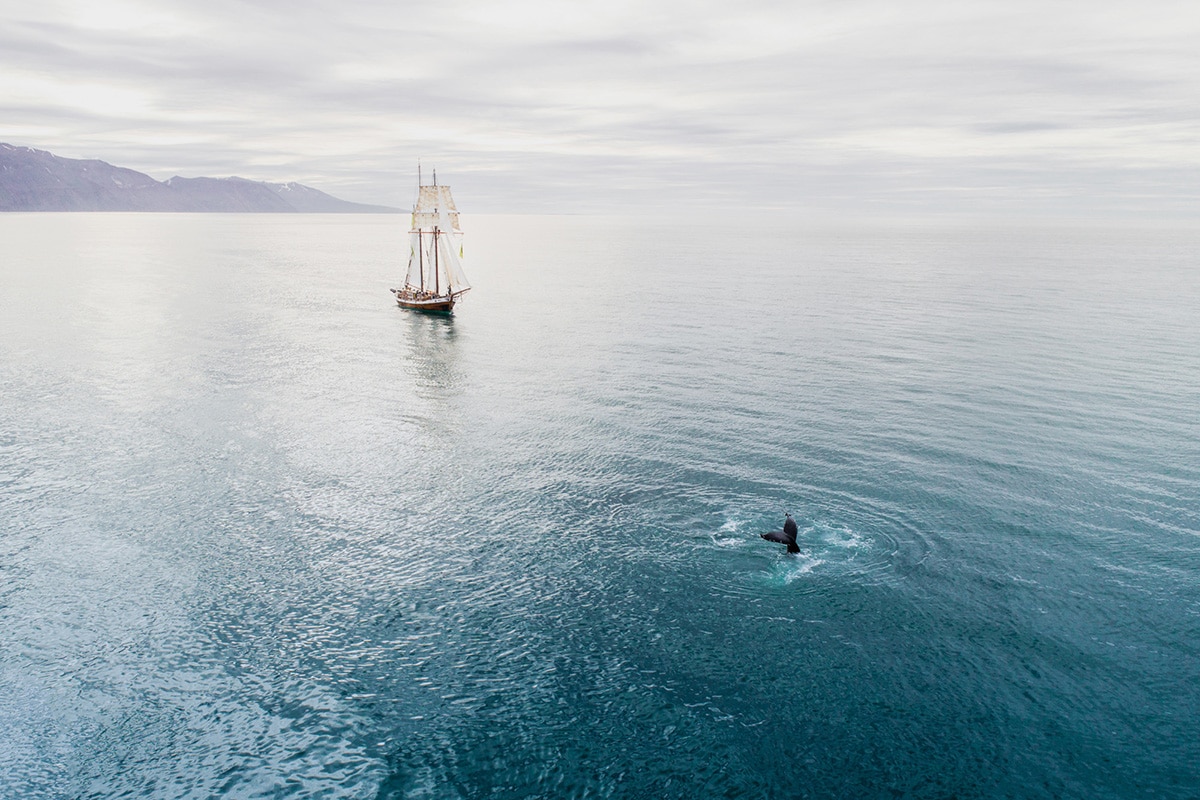 North Sailing offers lots of tours to bring you closer to nature! 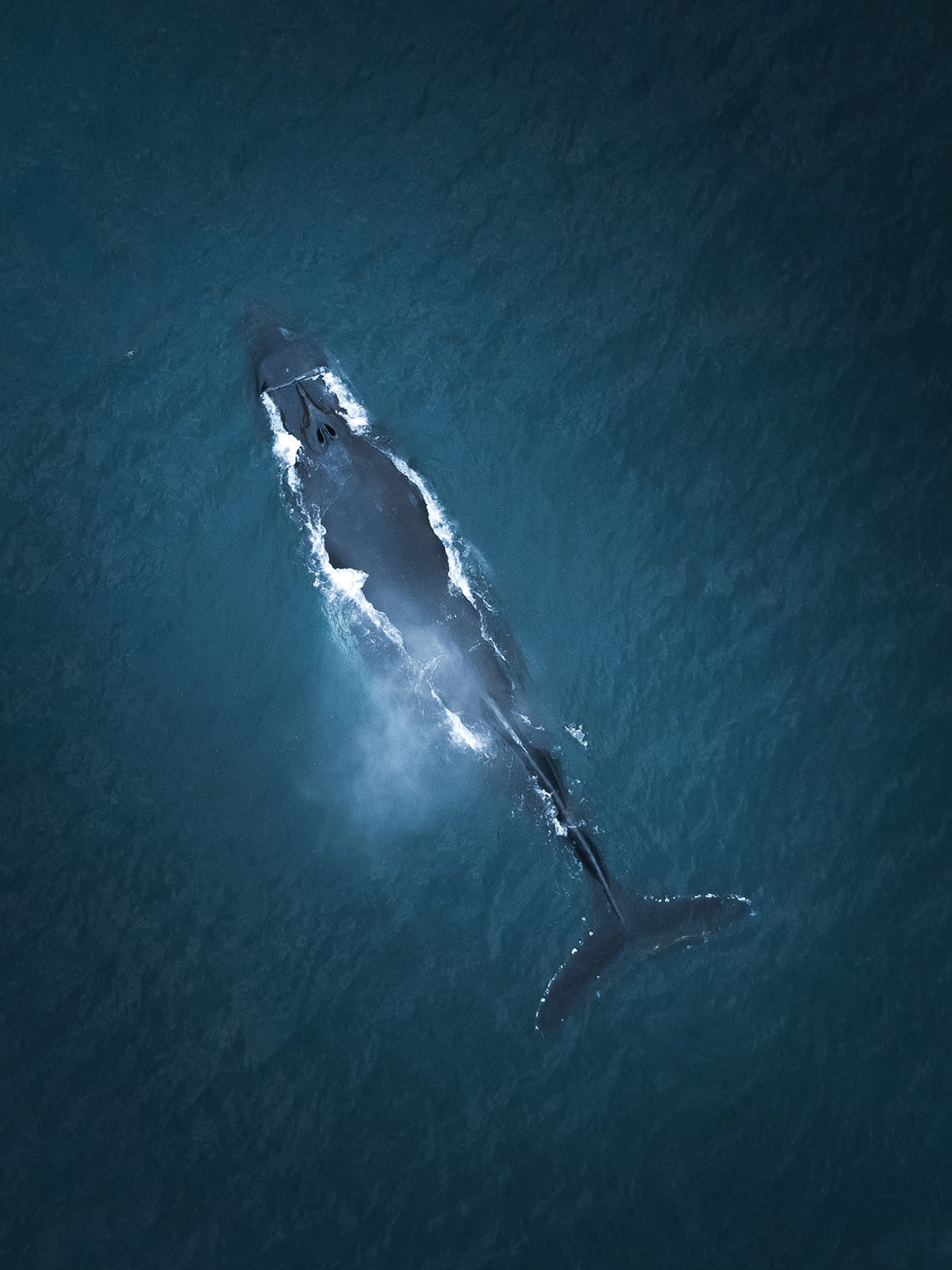