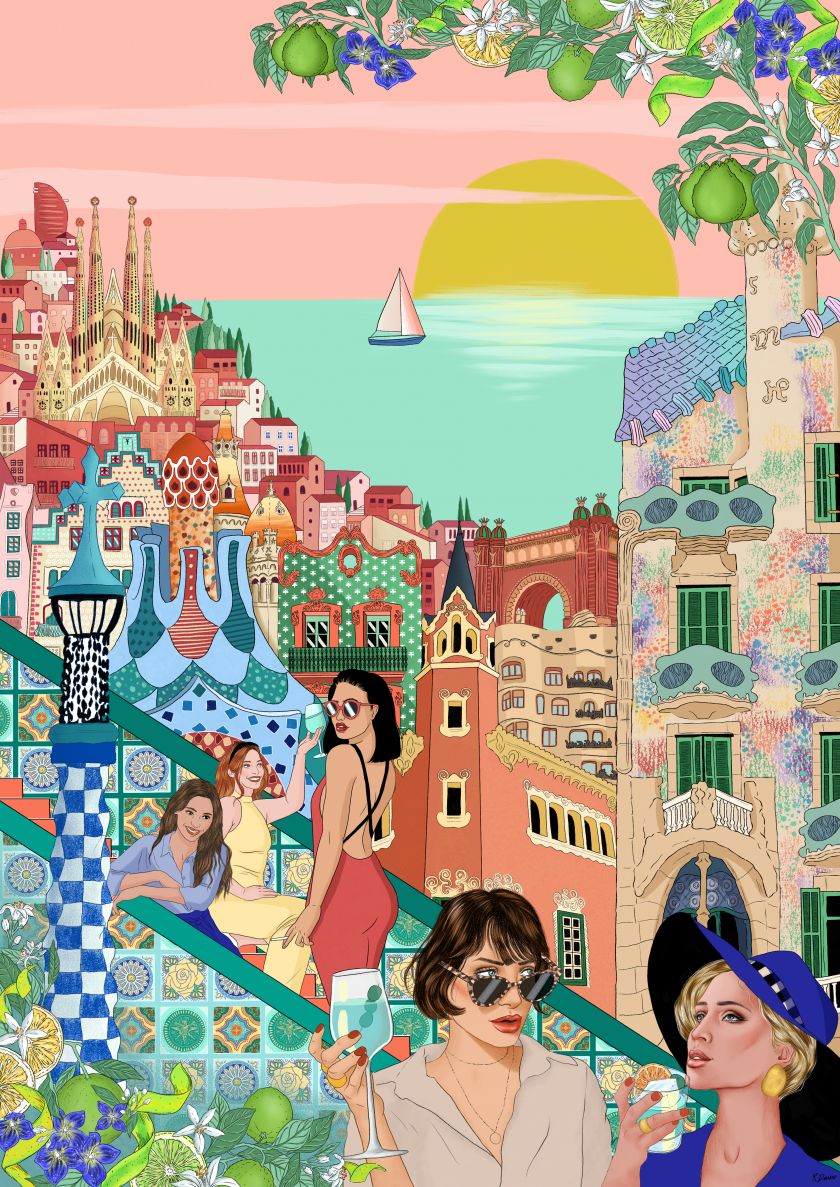 As the world starts to open up again, aperitivo brand Italicus is celebrating by launching a global art contest aimed at reigniting tourism to the world’s most exciting cities.

You can take inspiration from a city you live in or one that you’ve visited and felt a strong connection to. And you can draw on a range of media to create your artwork, including photography, digital illustration, drawing, painting, collage, animation, and stop motion.

The winner for each of the 14 cities will get a cash prize of €1,000, a digital exhibition of their work; social media coverage across Italicus and Moniker Art Fair’s channels; and a complimentary Italicus bottle and gift box.

As well as the city in question, artists should take inspiration from Italicus, a premium aperitivo brand that draws on Italy’s rich cultural history. Its iconic bottle is something to behold: shaped like a Roman column, with renaissance and baroque-inspired details around the cap, all magically married with the aquamarine colours of the Amalfi coast. 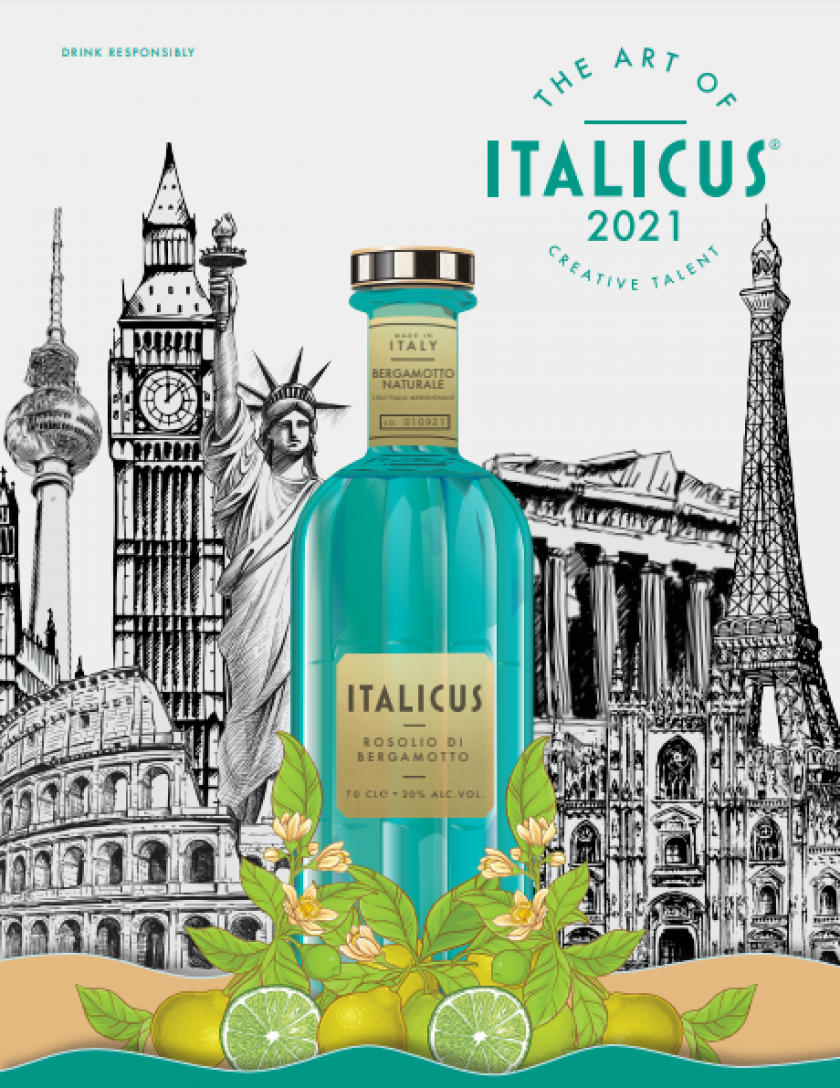 Artists must be 18+ (or 21+ in the US), and current residents of the UK, Italy, France, Spain, Germany, Sweden, Norway, Denmark, Greece, Russia, Netherlands, Ireland, Australia, Japan, Hong Kong or the 50 United States and the District of Columbia (this excludes Puerto Rico and all United States territories and possessions).

You must be the original creator and owner of the artwork you are submitting, and files must be under 15MB and provided as a Jpeg, PDF, GIF, MP4 or any compatible image or video file.

The closing date is 3 August 2021. All submitted artworks will be checked, and the online public vote will take place between 10th and 20th August. The winners will be announced on 1 September 2021. Enter the competition .

Inspiration for your entry

Not sure how to get started? To give you an idea of what they’re looking for, Italicus has partnered with five emerging artists who have created their own Cities Reimagined works of art as a source of inspiration for entrants. These are Mr Penfold (Miami), Vix Black (Milan), Roxane Dewar (Barcelona), Luke Smile (London) and Thomas Kirk Shannon (New York), and you can see all their creations below.

1. The vibrancy of Barcelona

For her contribution, shown at the top of this page, London-born illustrator chose to reinterpret Barcelona as she has a strong personal connection to the city. Her aim for the piece was to celebrate the city’s personality and landscape while adding aspects of her personal experience. “I wanted to capture the vibrancy of the people,” she says, “while also reflecting the rich cultural history of the brand and the Italian landscape.”

The whole piece is centred around the experience of the aperitivo, a pre-dinner ritual drink. “I wanted to reflect this sacred hour in which it is drunk and invoke the experience of it,” she says. “So I made the sunset the focal point of the piece surrounded by the Mediterranean sea, with the colours of the city warm and radiant, capturing the Italian landscape.

Roxane wanted to capture the essence of Barcelona as she remembers it, she adds, as a very social, welcoming city with people in the streets enjoying themselves. “I have intentionally deconstructed the recognisable landmarks and buildings and put them in different locations, as a kind of ‘memory’ of my time there,” she explains. “I have also added the ingredients of the drink around the edges of the piece – bergamot, gentian and chamomile flowers – while the yellow roses have been reflected in the Spanish tile.” 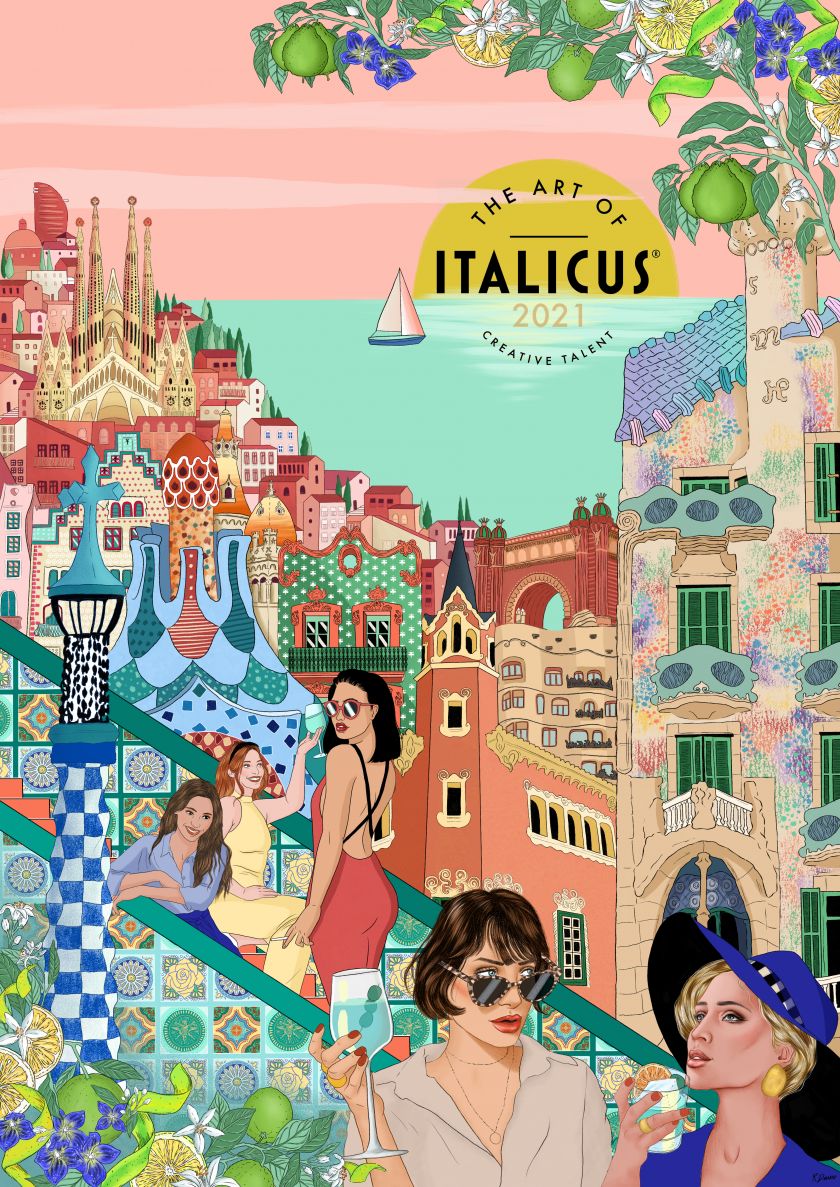 , otherwise known as the Bristol-based artist Tim Gresham, opted to create a piece based around Italicus’ iconic bottle shape and Miami as a city. “Due to the colours I use in my work, Miami was perfect for me,” he explains. “I just tried to create something that had that ’80s vice feel about it, The classic palms, pools and cocktails vibe. I pretty much went with the flow and made this with no final plan in mind. Just kept adding and playing around until it felt finished and worked with the brief.” 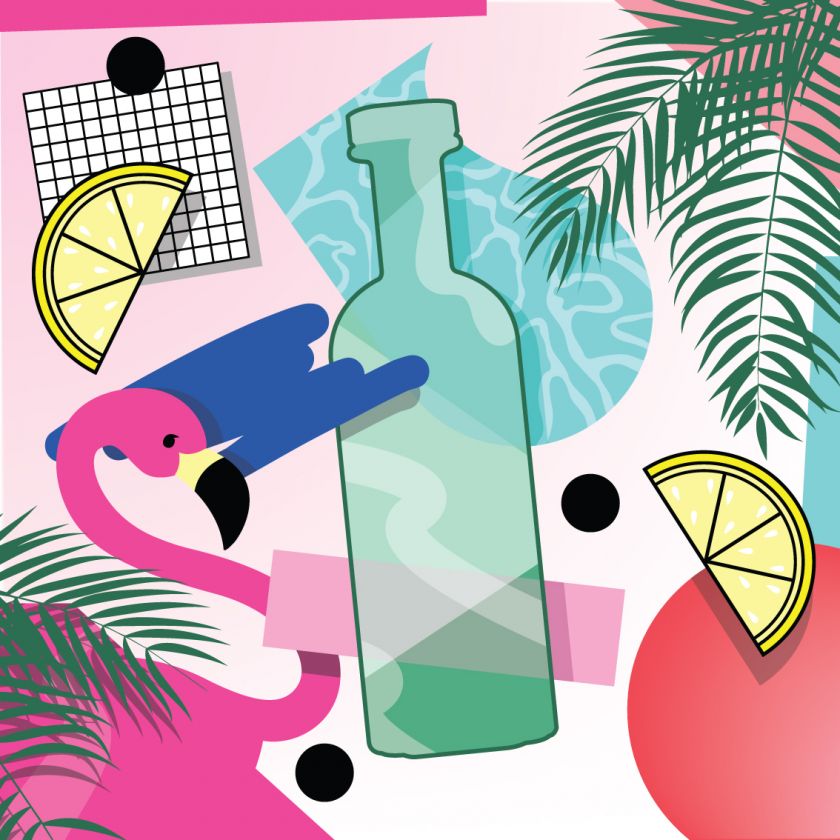 A self-taught and multi-skilled artist, Vito De Tullio, aka , is based in Milan. He has always found an escape from the usual routine through art and uses his creativity and fantasy to adapt his art to every contest he enters. His animation represents both the modern and the classic personality of Milan, as well as incorporating the mood and colours of Italicus. 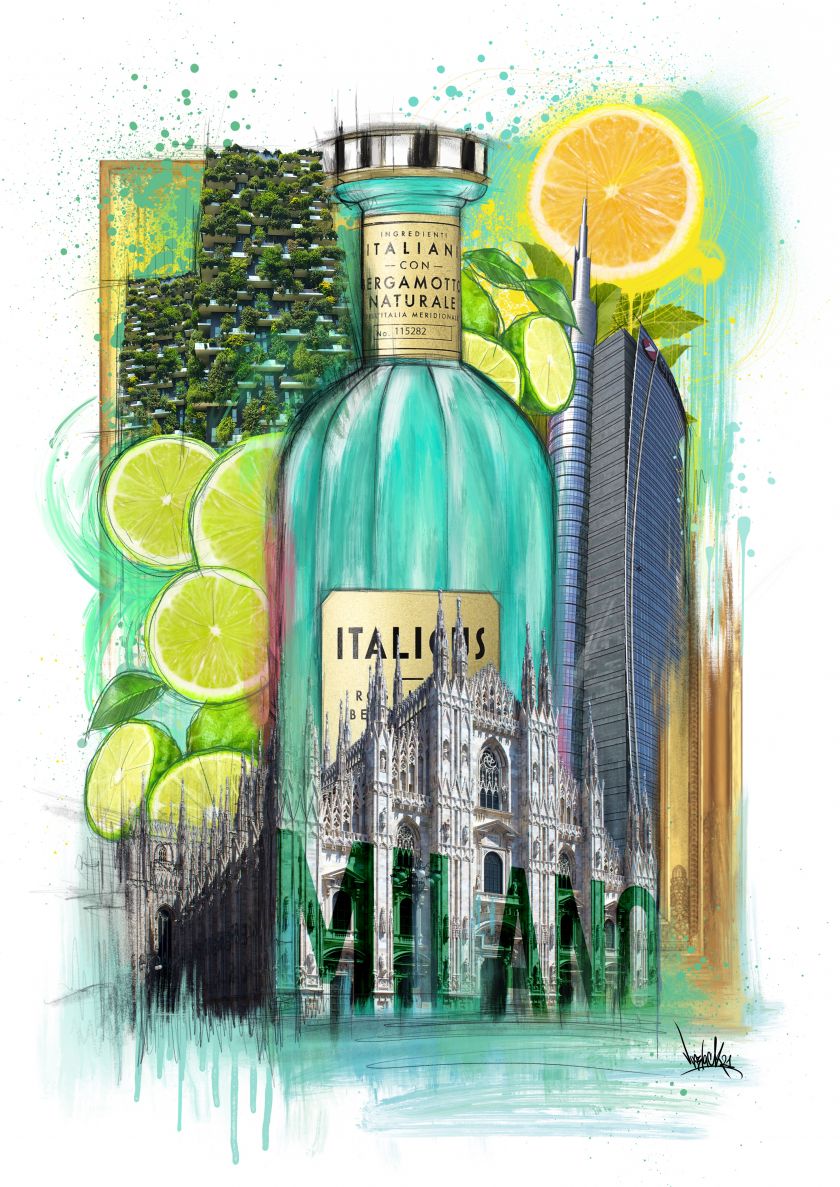 4. Good times are coming to London

For the Italicus reimagined brief, the artist created a fantasy mural on London’s iconic Tate Modern. A dream for any artist to paint and customise. Luke brought his traditional typographic work to life with this work, ‘Cheers to the Good Times Ahead’, in Italicus’ iconic colours. The saying represents a positive message, encouraging people to make the most of each day and add some zest to their life and is inspired by the Italicus flavours and citrus zest used in making a delicious Italicus cocktail. 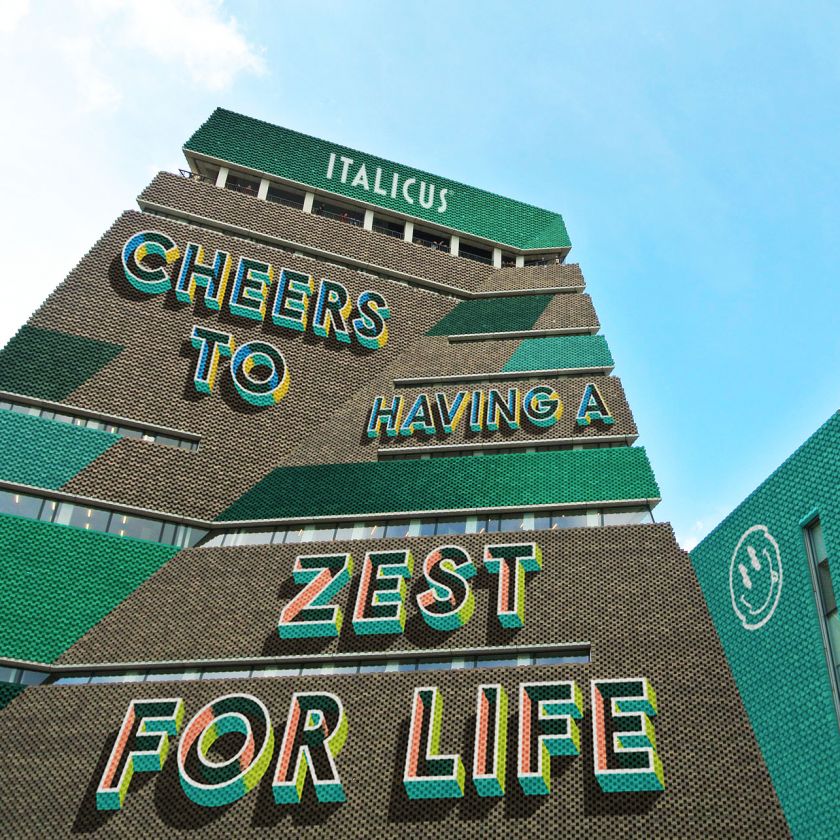 is a designer and art director whose work includes film set design, immersive theatrical performances, and multi-venue live entertainment festivals. He loves working on large scale artworks and has a particular passion for telling stories through imagery. This piece is inspired by the city of New York and its iconic Chrysler building.

To enter the competition, visit where you’ll find all the details and can register and upload your own original digital artwork. But hurry. The closing date is 3 August, so don’t delay: enter today!