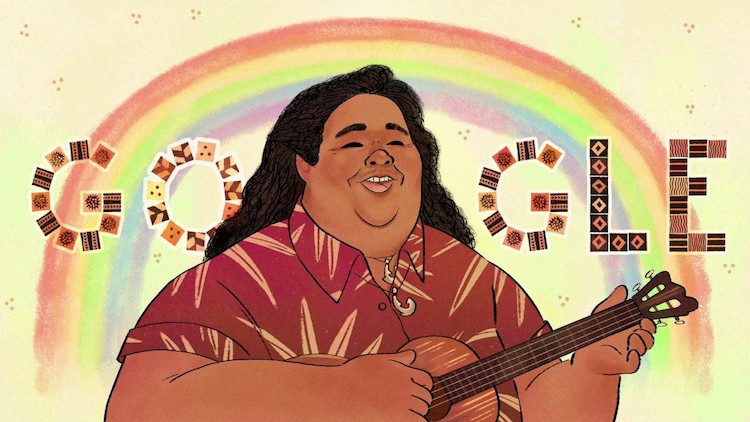 Google is known for honoring anniversaries, people, and events with their illustrated . One of the search engine’s most recent Doodles celebrates the 61st birthday of late native Hawaiian singer-songwriter and activist Israel Ka`ano`i Kamakawiwo`ole with a heartwarming animation. Widely referred to as the “Voice of Hawaii,” he is perhaps best known for his beloved rendition of “Somewhere Over the Rainbow“—the soundtrack of the Doodle.

Kamakawiwo`ole was born on May 20, 1959 in the suburb of Honolulu. The native islander was raised to share his community’s love of music, and he adopted the ukulele as his signature instrument at just 10 years old. Throughout his teenage years, he collaborated with his brother and 3 friends to produce 15 albums that celebrate the traditional sounds of Hawaii. One night in 1988, Kamakawiwo`ole picked up his ukulele and sang his own, emotional version of “Somewhere Over the Rainbow,” and the recording became an international favorite.

Google’s animated Doodle beautifully captures Kamakawiwo`ole’s life and music. It even features pieces of kapa, traditional Hawaiian fabric made from plant fibers and decorated with native Hawaiian plant dye. Google partnered with the Kamakawiwo`ole’s family for the project. “The Kamakawiwo`ole `Ohana (family) remains overwhelmed by the worldwide reach of Israel’s music and the reaction of everyone who hears his voice, a voice that instantly touches your heart,” they say in a . “Having Google create a Doodle for his 61st birthday gives us all reason to again celebrate his life and impact on millions worldwide.”

Check out the Israel Kamakawiwoʻole’s 61st Birthday Google Doodle below. It’s impossible not to sing along!

All images via Google.