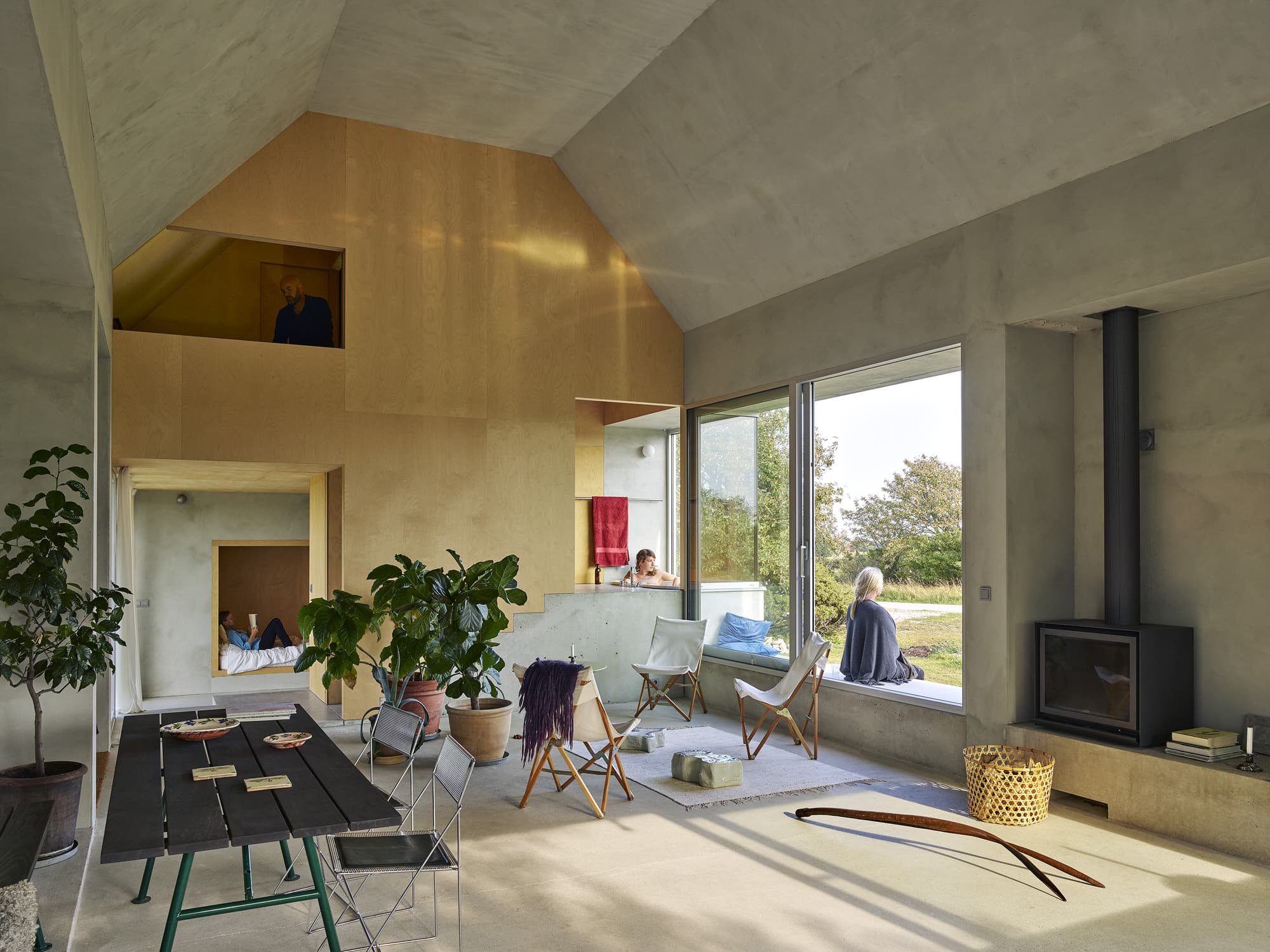 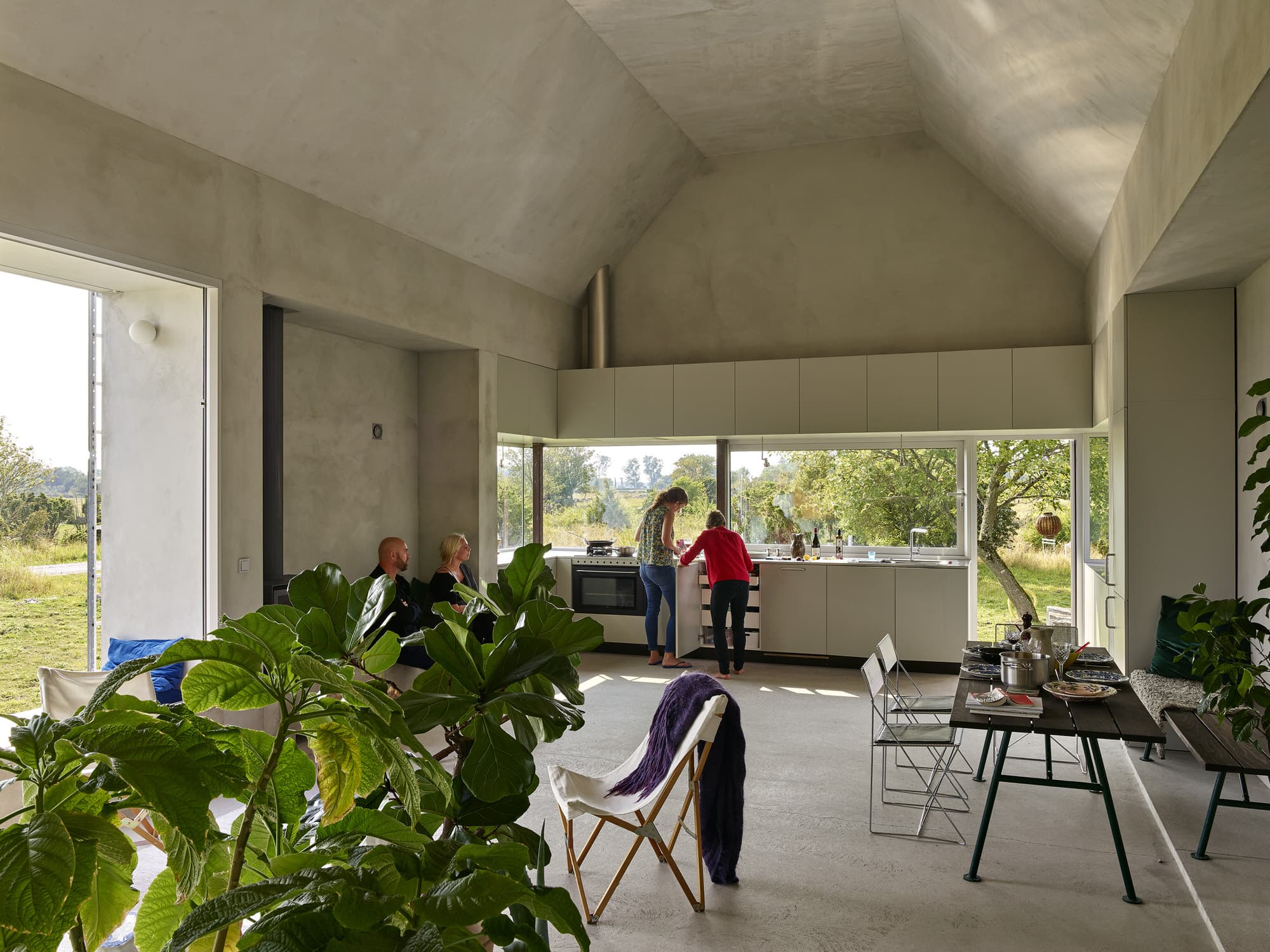 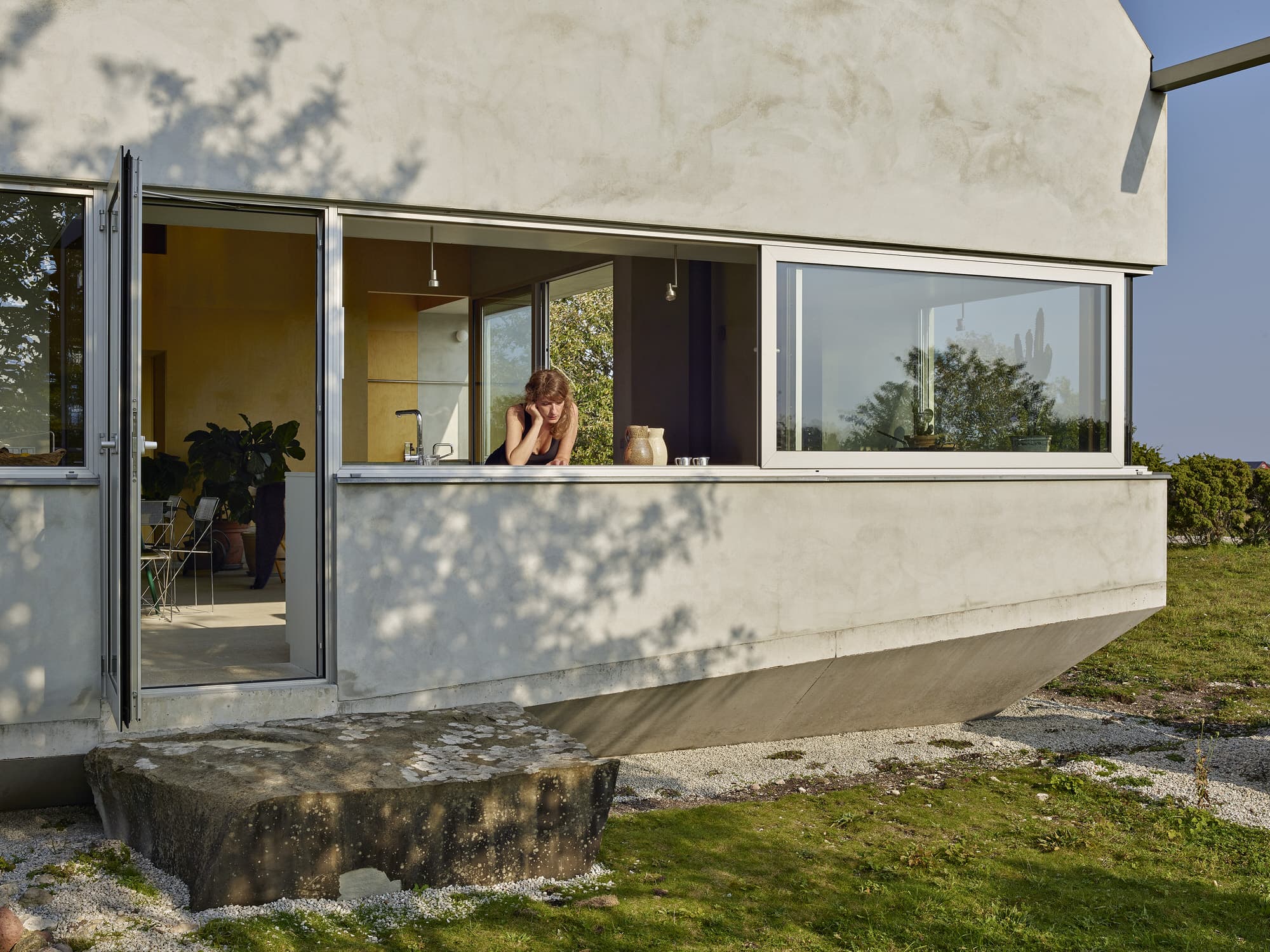 Set in the secluded land of Hullehällar, the southern part of ’s Gotland Island is ’s breathtaking Hamra Studio Residence. Stockholm-based artist, , commissioned her friend and Collectif Encore’s co-founder, Anna Chavepayre, to design a for her and her partner Staffan Burling. Together with the builder, Allan Wahlby, and through several ambitious ideas, experiments and sketches, Hamra is realised with an evolving narrative that merges with the serene landscape and seasonal changes.

This remarkable home is not to be overlooked by its unassuming appearance – instead, it beckons for us to marvel at the simple gestures that call for evocative details that make the unique form so mesmerising.

The brief was designed on a simple requirement – to ensure the house is protected from mice. In addition to the brief were also restrictions and regulations enforced on the site – all houses built within the area were to adhere to a certain height and volume, mimicking the forms of existing ‘small farmhouses scattered across the countryside’. It’s a niche requirement, but it served as a delightful opportunity for Hamra’s design potential. 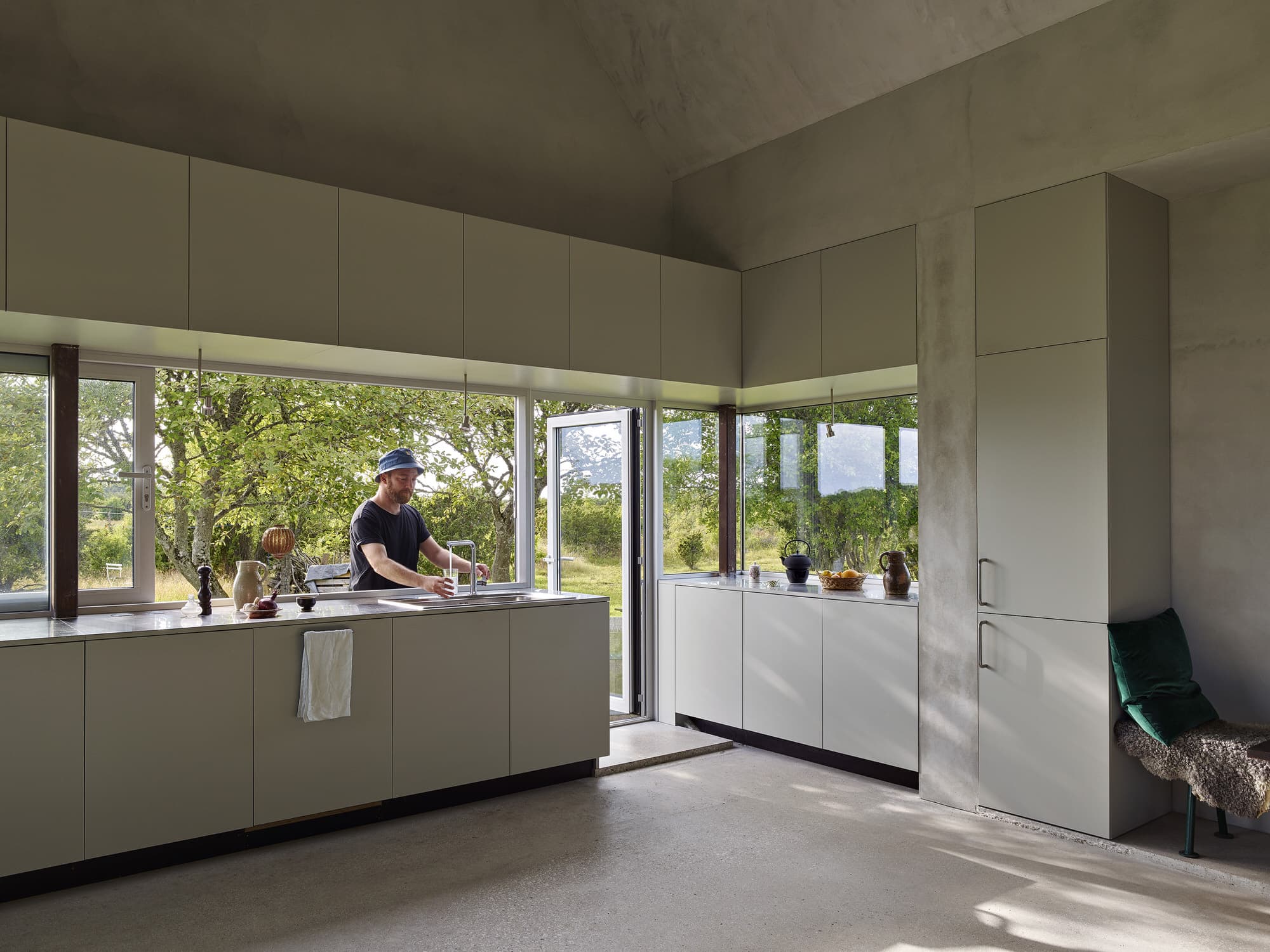 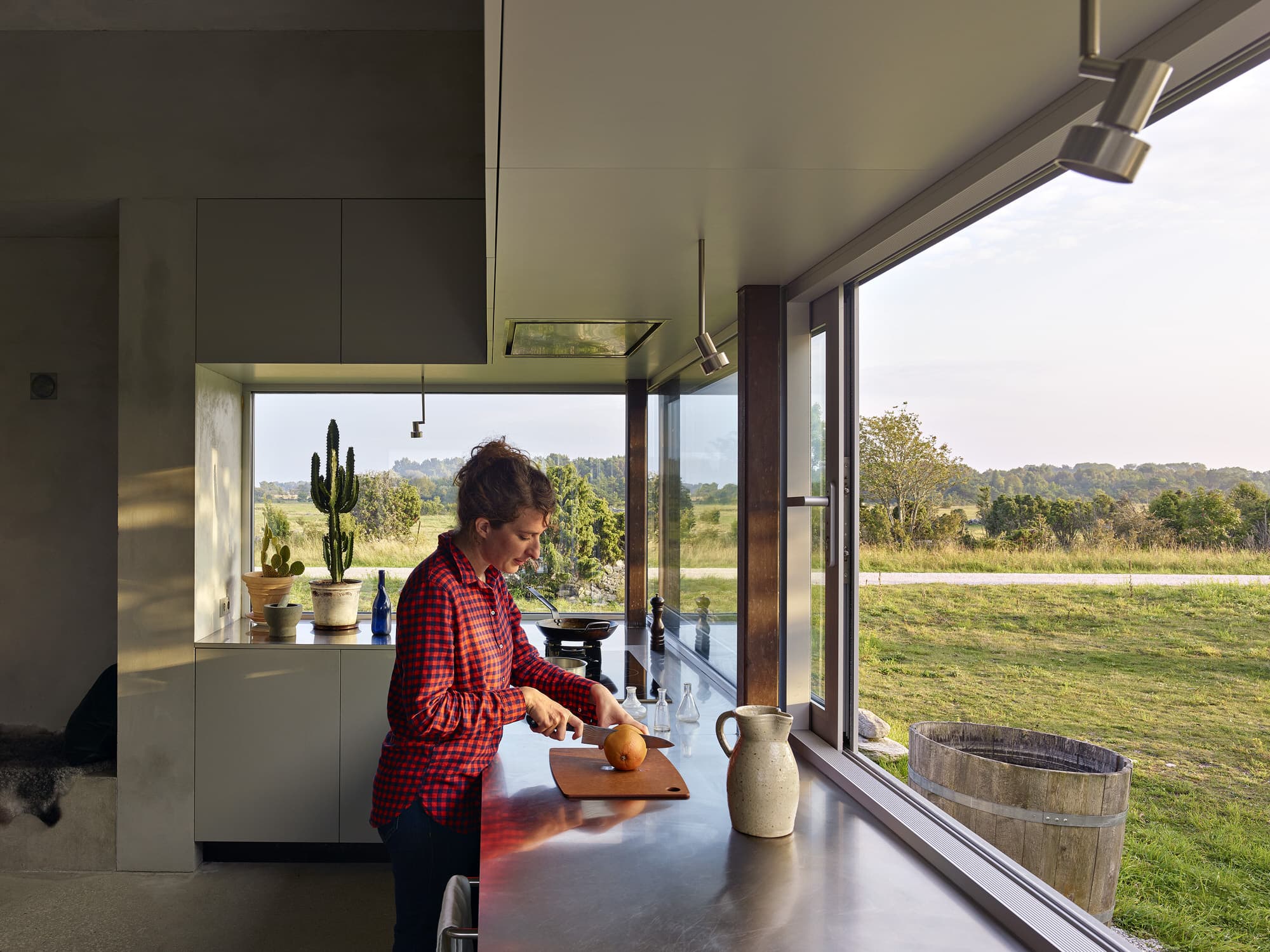 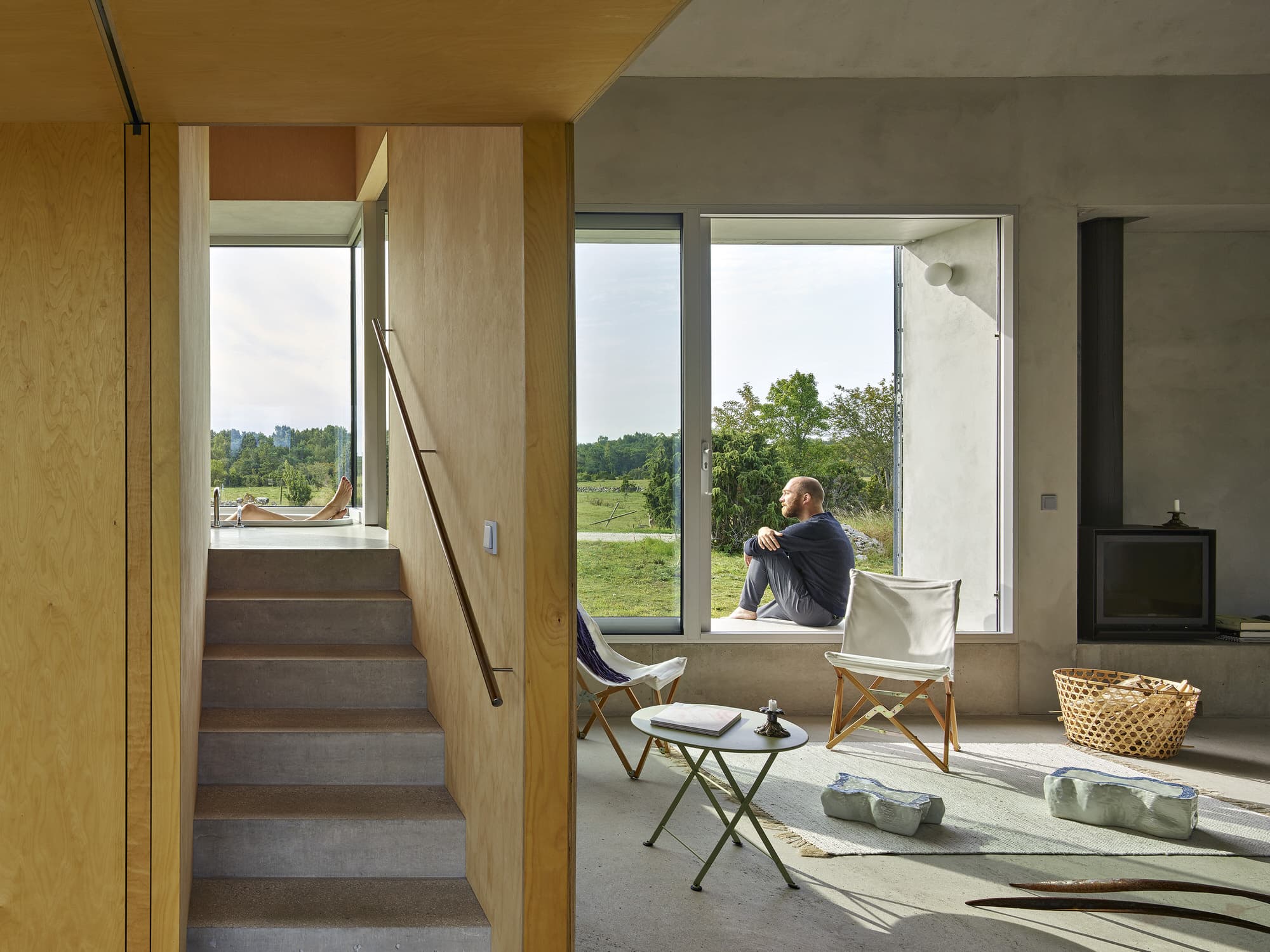 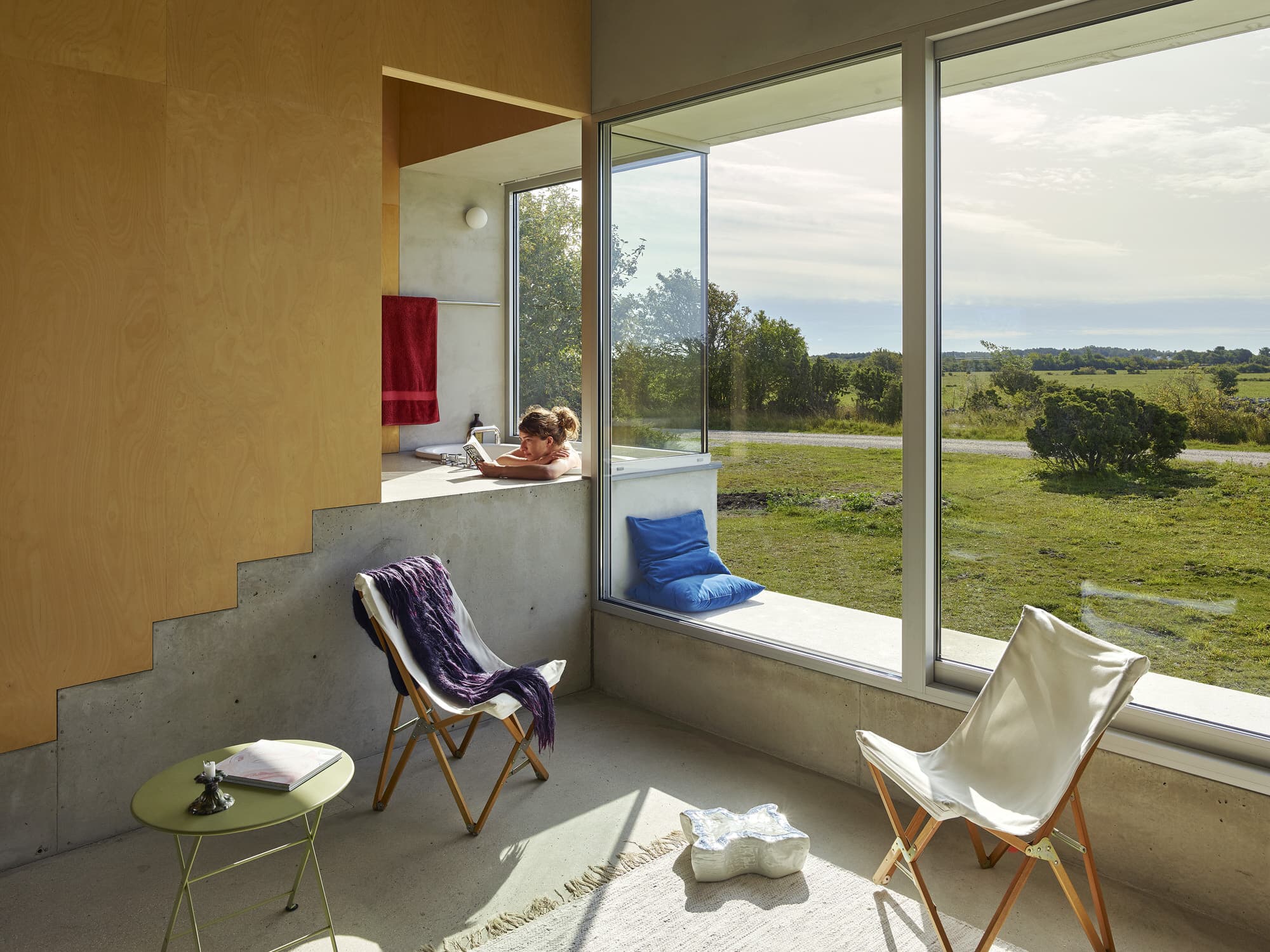 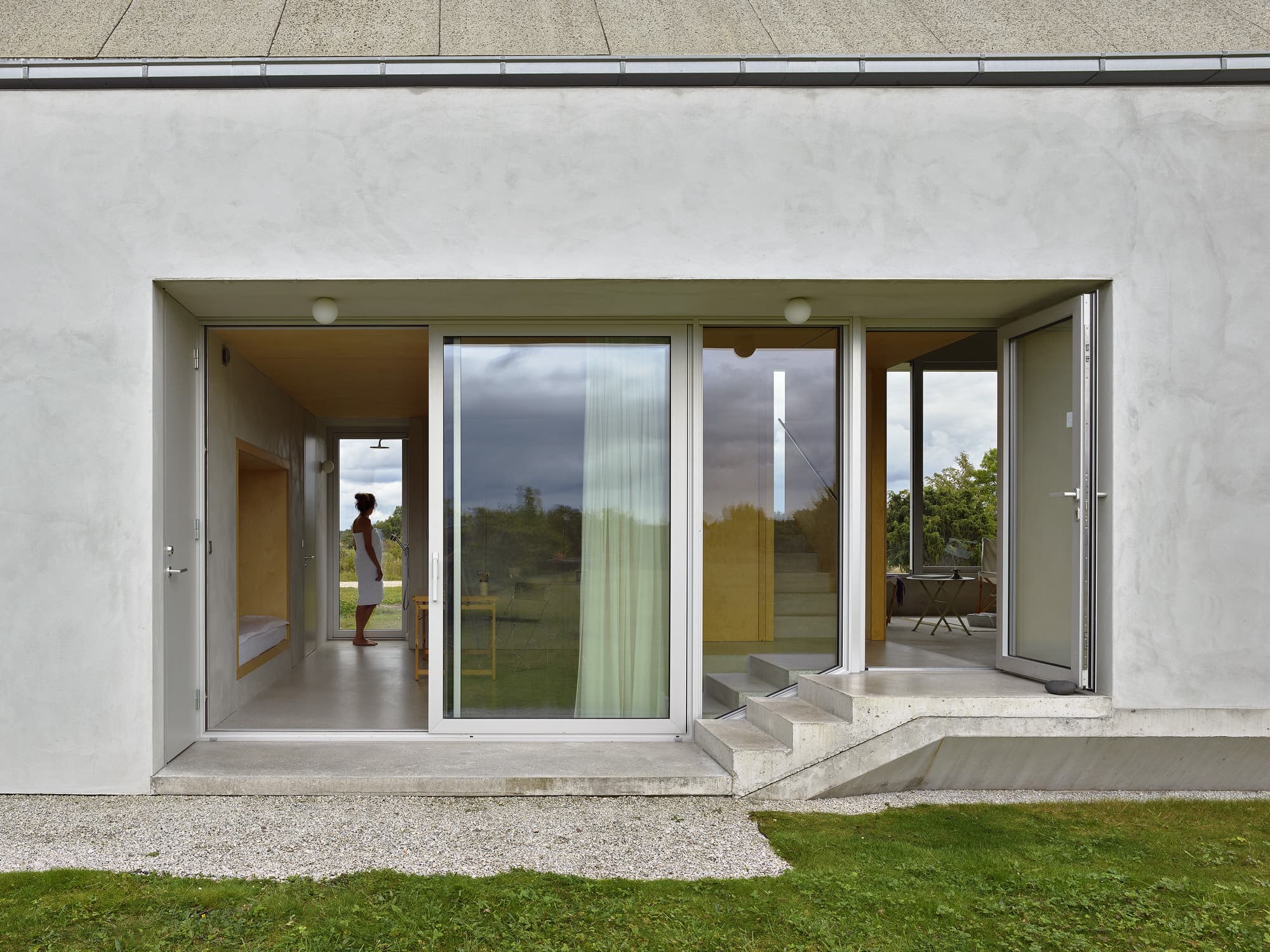 Against the grassy plains, the building presents as an interactive art sculpture made of rough and robust cuts. The house is laid with an angular and solid impermeable concrete floor and foundation, with walls made of expanded clay blocks that functions as insulation plastered in lime (as required by the building regulations). An external ladder is attached beside the main entrance, inviting observations of nature from above.

The neutrality of the external palette is carried internally. However, Chavepayre divided the studio’s public and private programs with a habitable timber wall concealing a mezzanine – a cheeky solution to adding additional space due to size restrictions. The ground floor presents an open living area with kitchen bordering the walls. The timber partition hides guest area with a sleeping nook nestled into the thick wall, along with studio space, a toilet and a shower. The separation also disguises a staircase with an elongated landing and a throne-like bathtub (which peeks towards the landscape or into the living space) with bookshelves tucked on the surfaces. Upstairs lies the couple’s private quarters – a bedroom, balcony for birds, and an aqua-blue tiled bathroom with ocean views. Throughout, sightlines of each space are oriented to allow the landscape to consume the house. No partition becomes a missed opportunity. 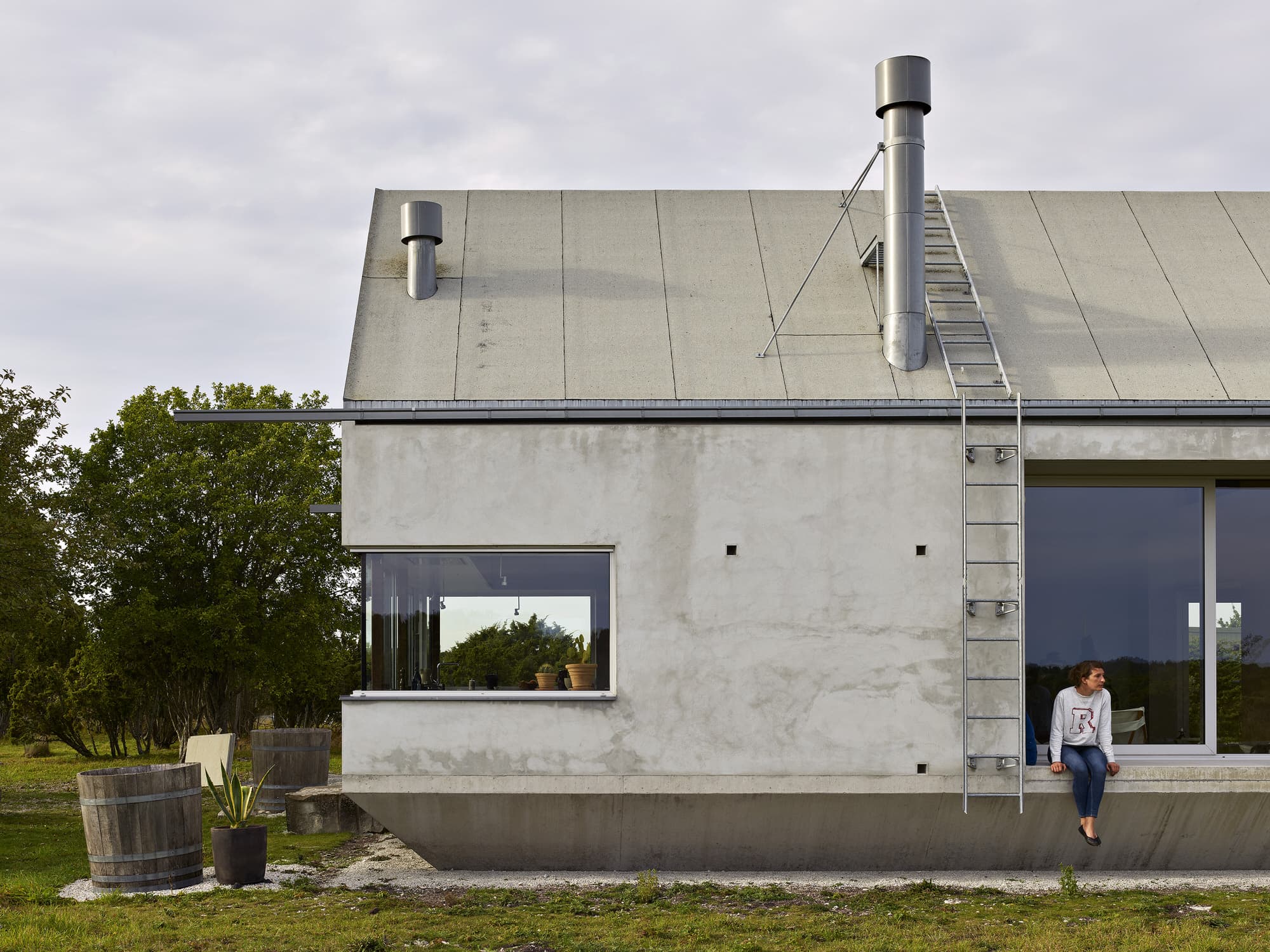 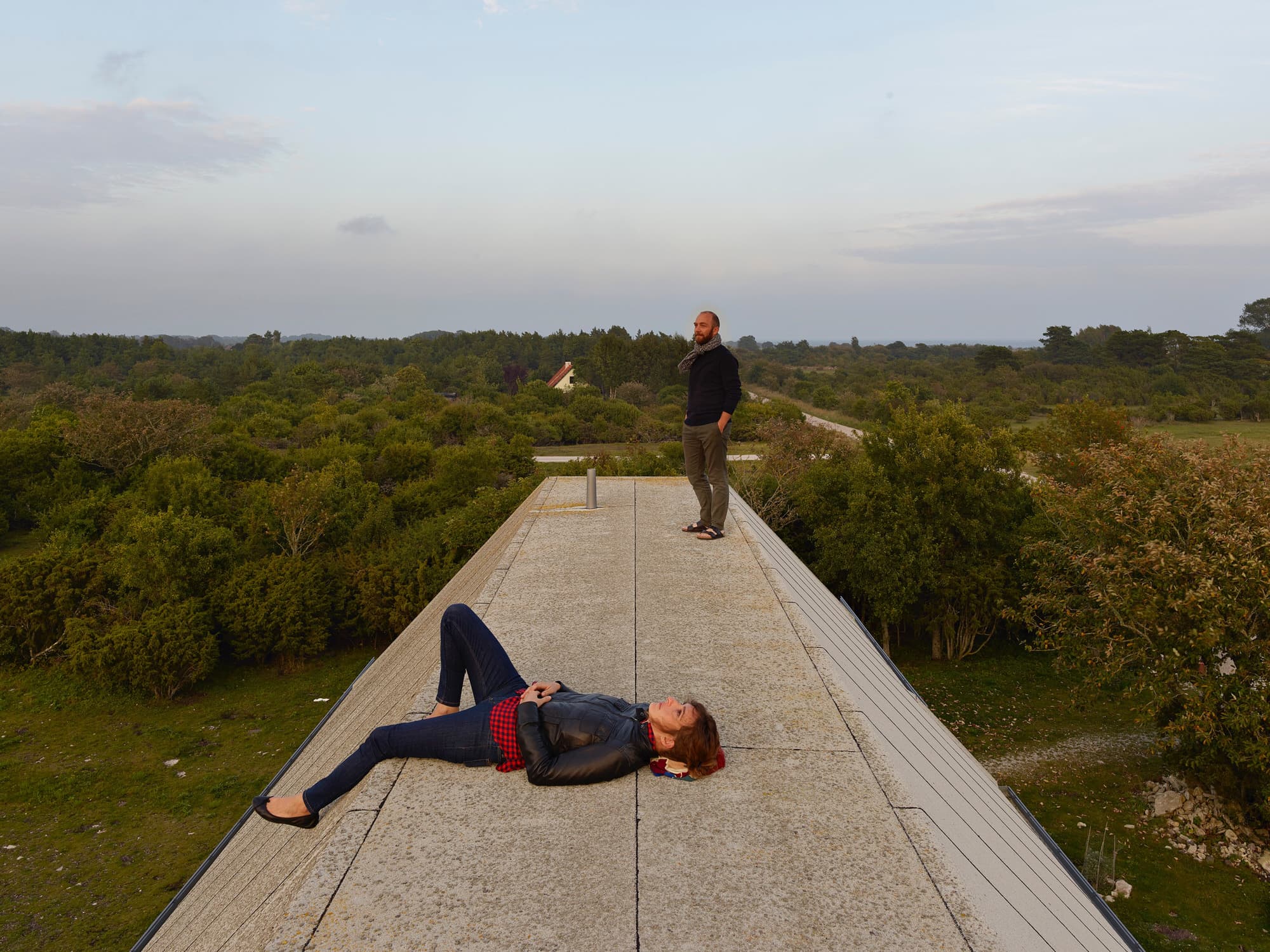 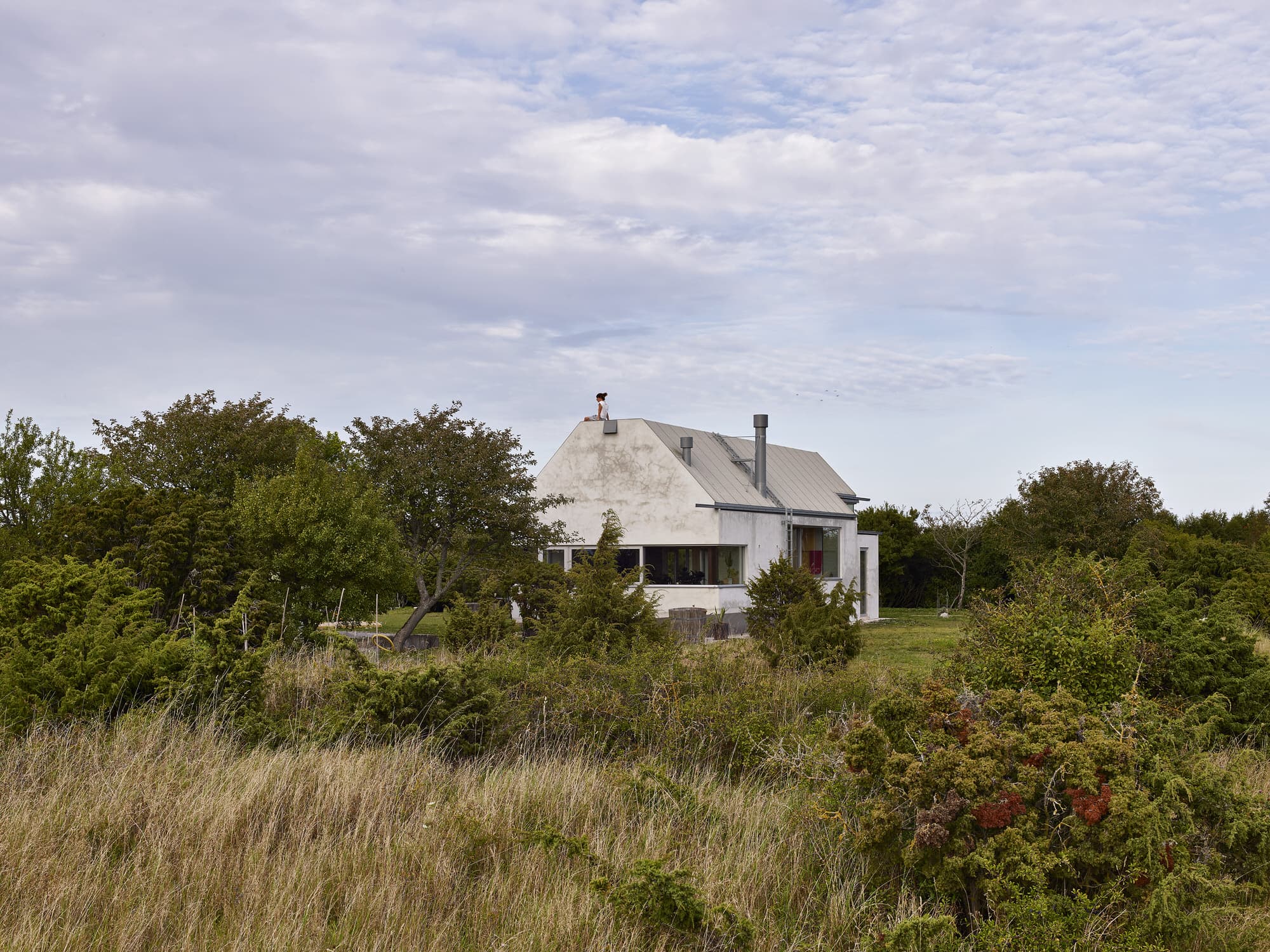 At Birgitta’s insistence, the house is orientated closely towards a near-forgotten road, becoming a gatehouse between the public and private garden. In the warmer months, the house’s transparent facades punctured along the external walls dissolves to expanding the garden into a gathering space. In colder seasons, the couple retreats inside and operate within the timber vessel.

It’s no surprise Collectif Encore was awarded the Kasper Salin award for the simplicity in Hamra’s design, ensuring that the most minute details are functional and immaculate. A simple kiss between the timber and stone in the stair details; being precise with the alignment of views towards the horizon; and the lime canvas façade capturing the sunset orange speckling through the tree’s silhouette – Hamra is methodically playful and poetic at each turn.