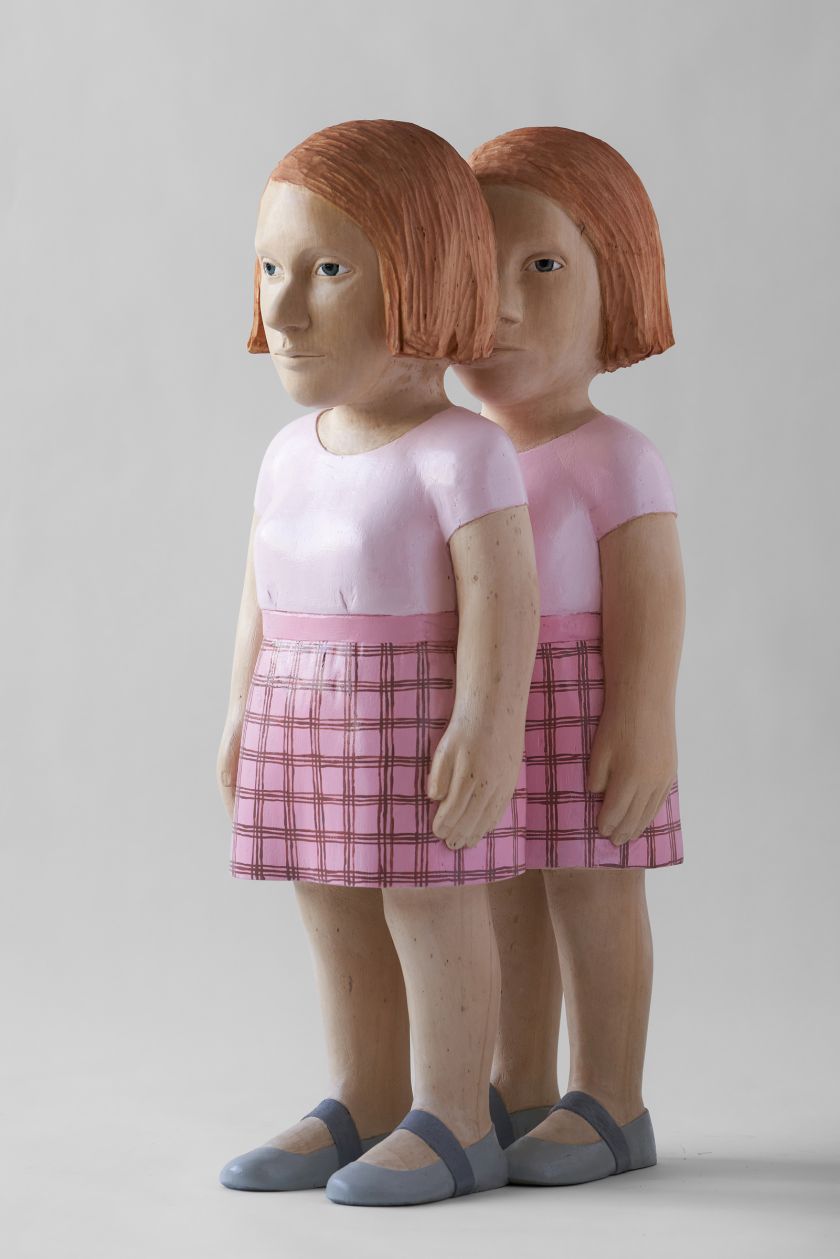 In Doubles, her latest series of figurative painted wood sculptures and works on paper, Cape Town artist takes a closer look at the double lives we lead, from what we do in private to how we present ourselves in public. Each haunting figure reminds us that we can’t run from ourselves, no matter how much we might want to.

On show at in New York City this month, Claudette Schreuders’s wooden sculptures feel pretty heavy, laden with a burden we can’t see or understand. It’s as though the depicted characters cannot escape from themselves, something that has only been heightened during months of restrictions and social isolation.

“The double image can be read as someone trapped with their own company,” Claudette tells Creative Boom. “There is such an emphasis on self-love in contemporary society, but being occupied only with yourself is not a recipe for happiness. There has been a lot of polarisation lately. People seem to be uninterested in understanding anybody who does not share all their ideas.” 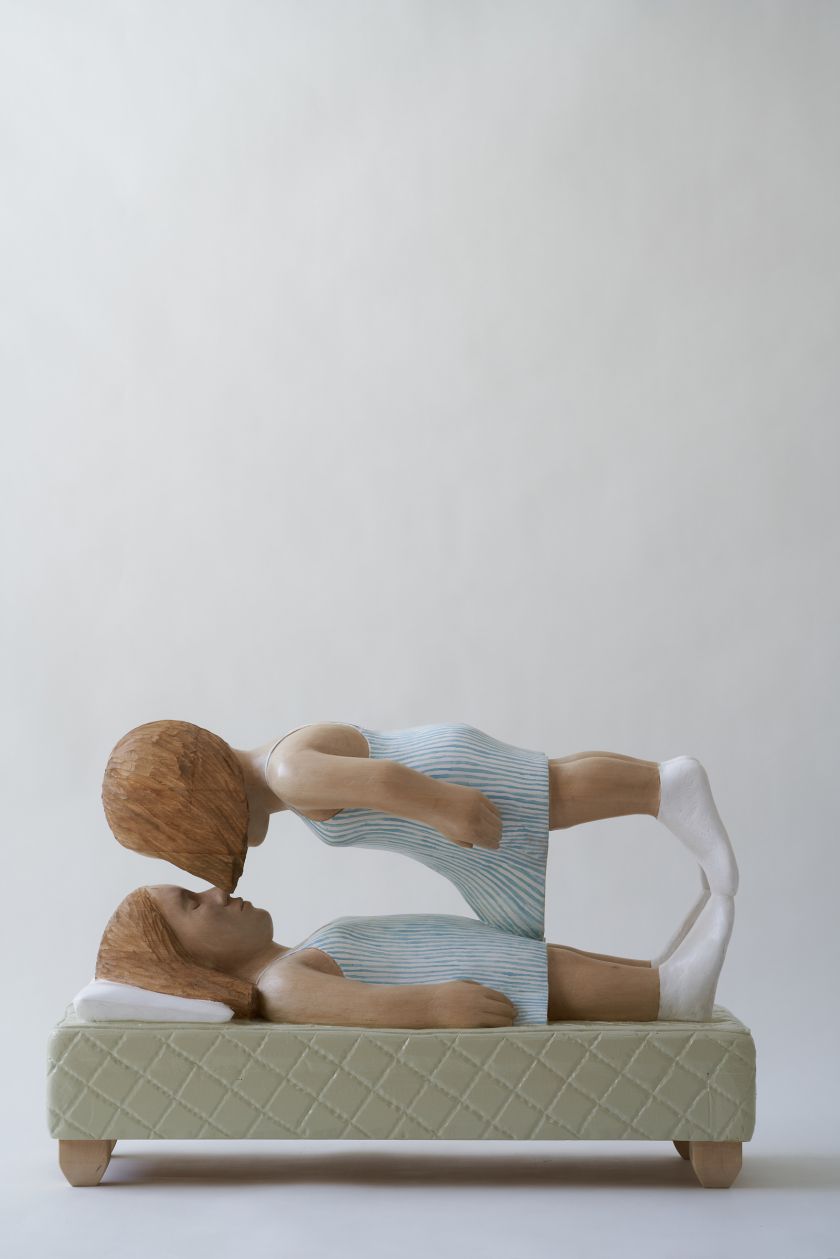 In our eyes, we see the figures as quite sinister, perhaps hinting at the darker side of humanity, but that’s not the intention. “Maybe it’s just the realities of how we live now,” says Claudette. “One of the most shocking revelations to me when I had just graduated and started working on my own in my studio was how lonely it is to work like that and how hard it is to have only yourself for company. And I think that is something that not only artists and writers have to contend with these days.”

The artist’s sculpture work is rooted in both African and European traditions. She derives her inspiration from various sources, including medieval church figures, West African carving and Spanish portraiture. Accomplice, for example, is inspired by The Visitation, a classic sculpture believed to have been made in Germany around 1310 and is now in the collection of New York’s Metropolitan Museum of Art.

The gestures in this piece – the Virgin Mary’s hand tenderly placed on her relative Elizabeth’s shoulder, who holds her hand to her chest – are repeated in Schreuders’s figures, which are a reflection of each other connected by these same mirrored gestures. In Intruder, the figure hovering above and the reposed woman are balanced upon their skirts and conjoined feet. 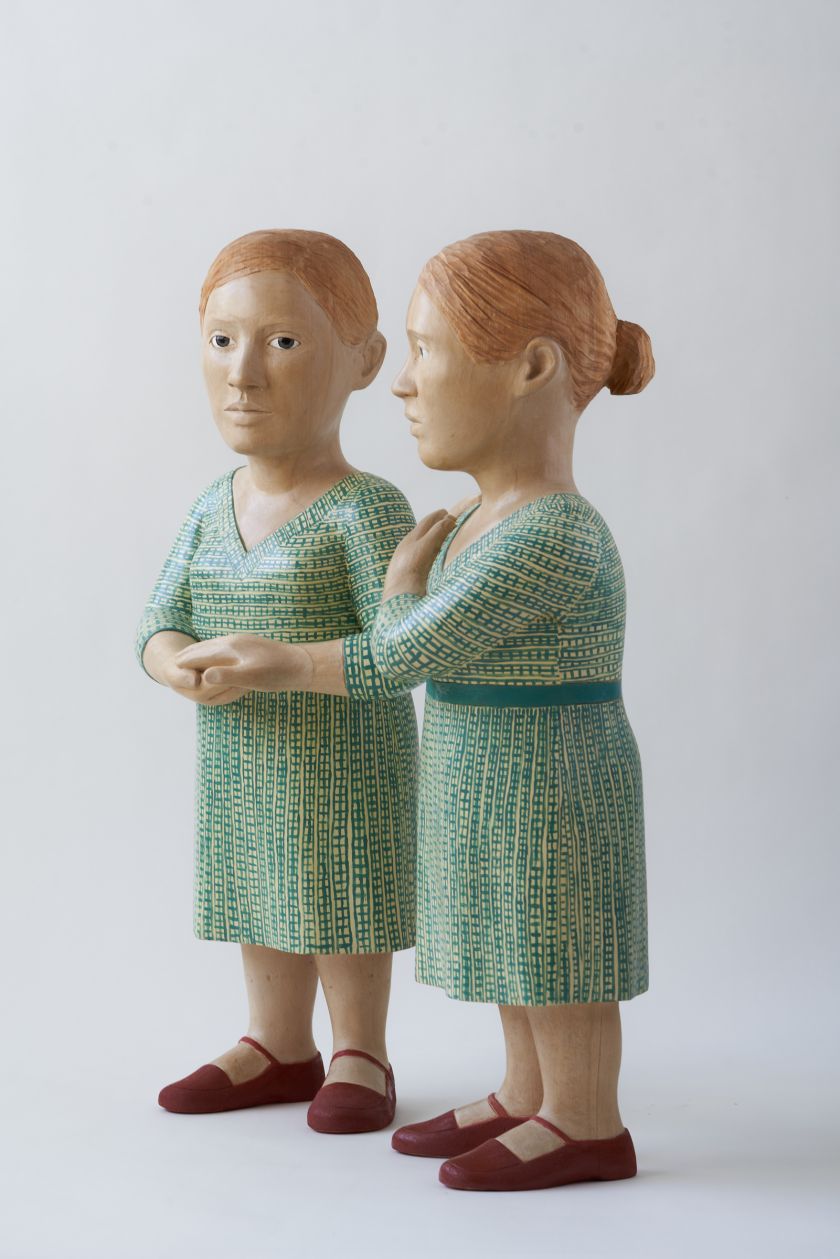 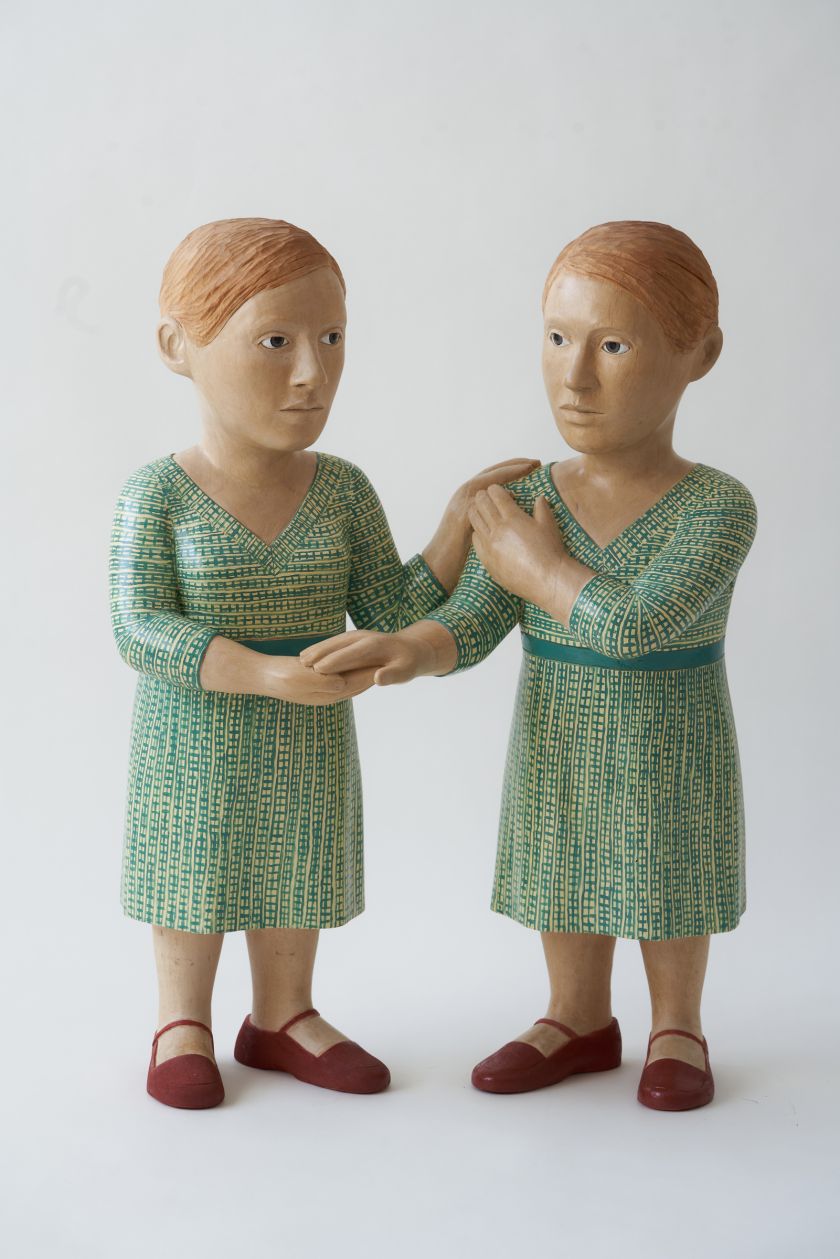 Also on display is a series of smaller works on paper present Schreuders’s other studies and source imagery, such as The Visitation and drawings of her earlier sculptures. These drawings are a critical part of her process, living as a record of her work and practice.

Interestingly, the sculptures’ titles are drawn from chapter headings in the memoir Hope Against Hope by Nadezhda Mandelstam, the wife of the great Russian poet Osip Mandelstam who was arrested and died during Stalin’s Great Purge of 1937-38 in the Soviet Union. Consequently, these adopted titles only add to the sense of paranoia and distrust that is felt in the sculptures, whose figures are both alone and observed. We’re left with a sense of unease when confronted with these works. There is a type of madness in repetition. Perhaps they’re too close to our own truth. 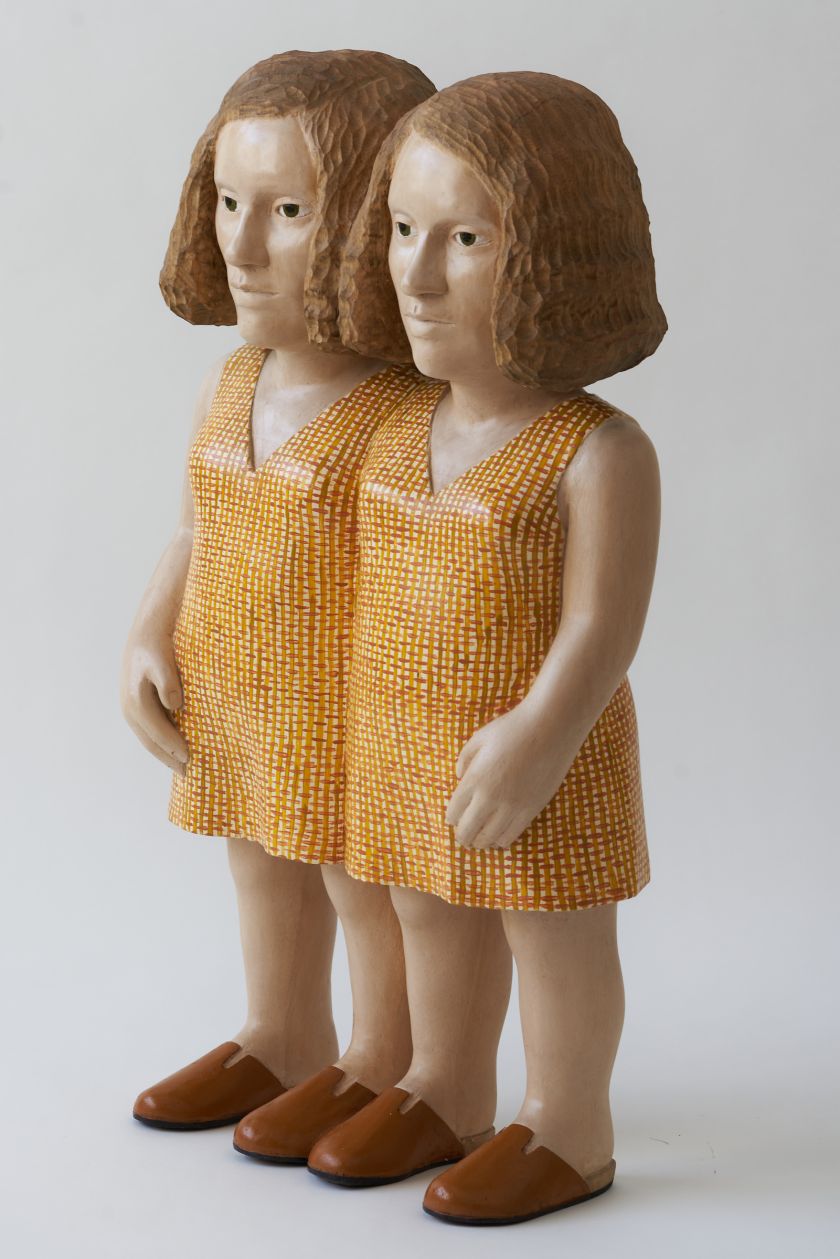 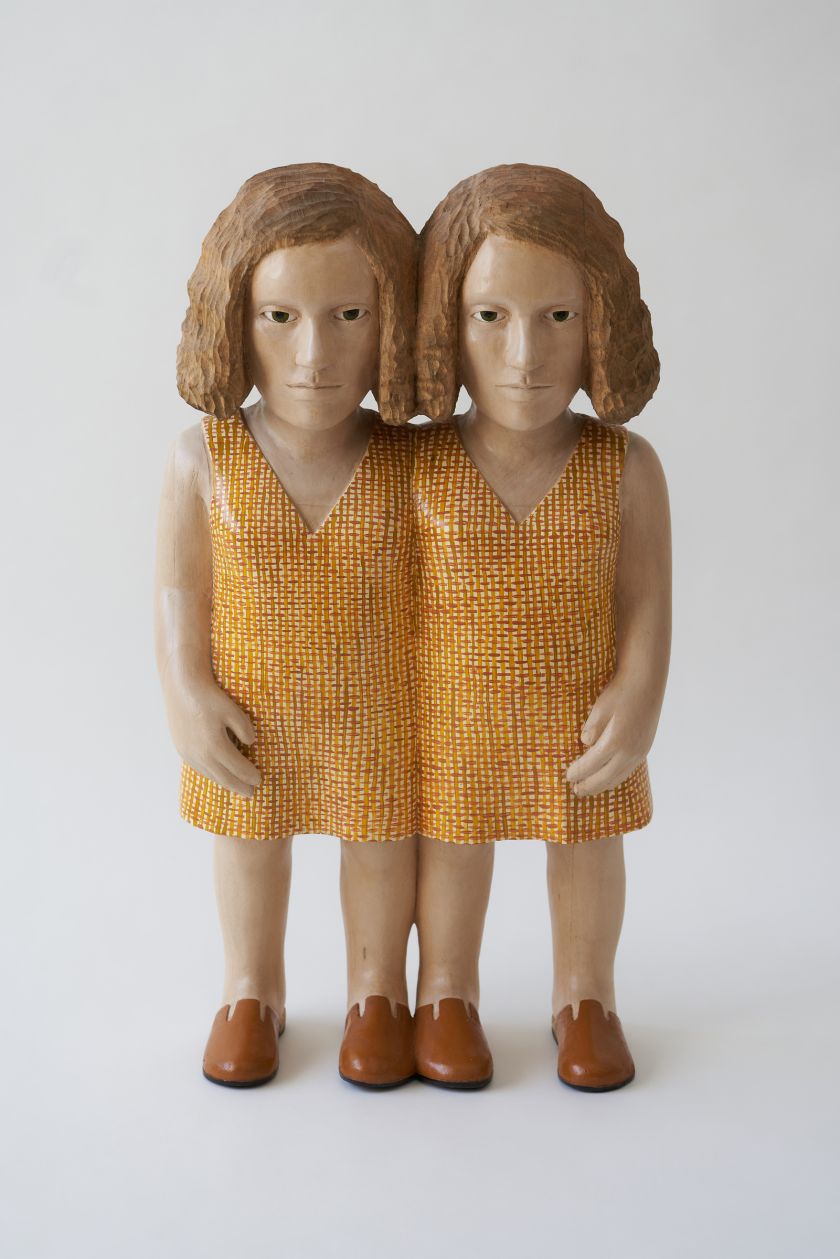 In these latest works, Schreuders follows a familiar theme, recognising the increased polarisation and extremism that has been exacerbated by the pandemic and our isolation when one only looks inwards or at one’s own kind. In her work as an artist, Schreuders sees this in stark contrast to her time as a student in newly post-apartheid South Africa, when she felt encouraged to study other traditions and cultural production. It raises how to bridge the racial gap and continue in this current landscape.

“That was the epitome of an intolerant society,” she tells us, “something I see society moving towards now. The surprising thing about such a society is that people are intolerant within their group too, and the questioning of ideas accepted by your own group is not tolerated.”

Doubles by the South African sculptor Claudette Schreuders is on display at New York City’s Jack Shainman Gallery until 2 April 2022. Find out more at .