Being elected the President of the United States of America comes with its own set of responsibilities – you know, like running one of the biggest countries on Earth. However, newly elected presidents also get to redecorate the Oval Office which in my opinion more than makes up for all of the responsibility that comes with the presidency.

Recently, Aspire Doors created six interesting illustrations detailing how the past 6 US Presidents redecorated to the Oval Office, and it’s quite interesting to all of the little changes each one of them made. Check out the illustrations in the gallery below! 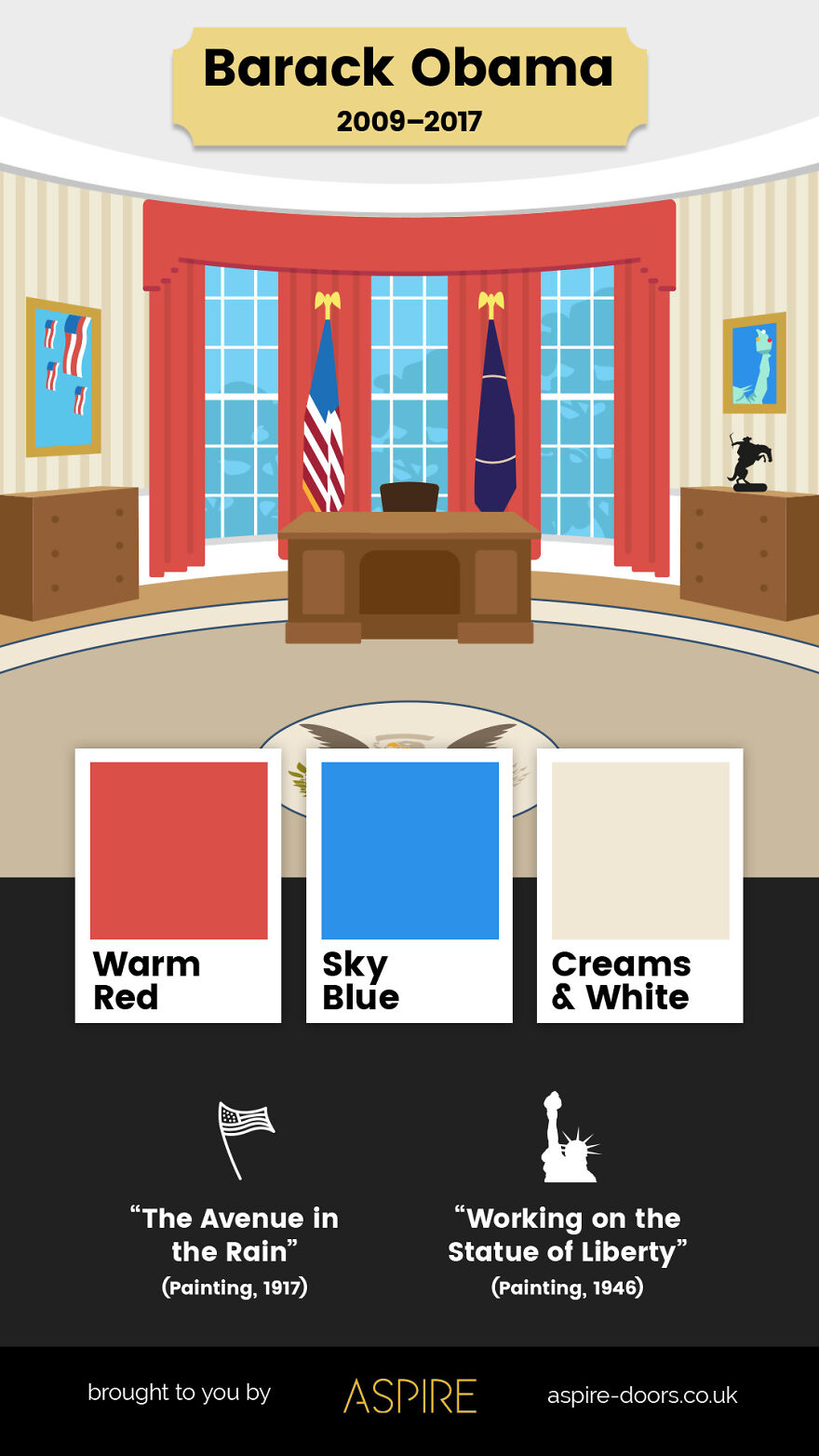 “Arguably one of the best Presidents that the United States has ever had—also, the first black President, and possibly the most humble. Barack Obama managed to keep his Presidency for two elections, making him President of the United States for 8 years.

Being a man of the people, Barack didn’t choose flashy colors for the Oval Office’s décor. During Obama’s presidency, he chose a primary color scheme not too far removed from the American flag with warm red, sky blue, and creams and white.

A man more into paintings than statues, the Oval Office’s key items were two paintings: The Avenue in the Rain, painted in 1917, and Working on the Statue of Liberty, painted in 1946.” 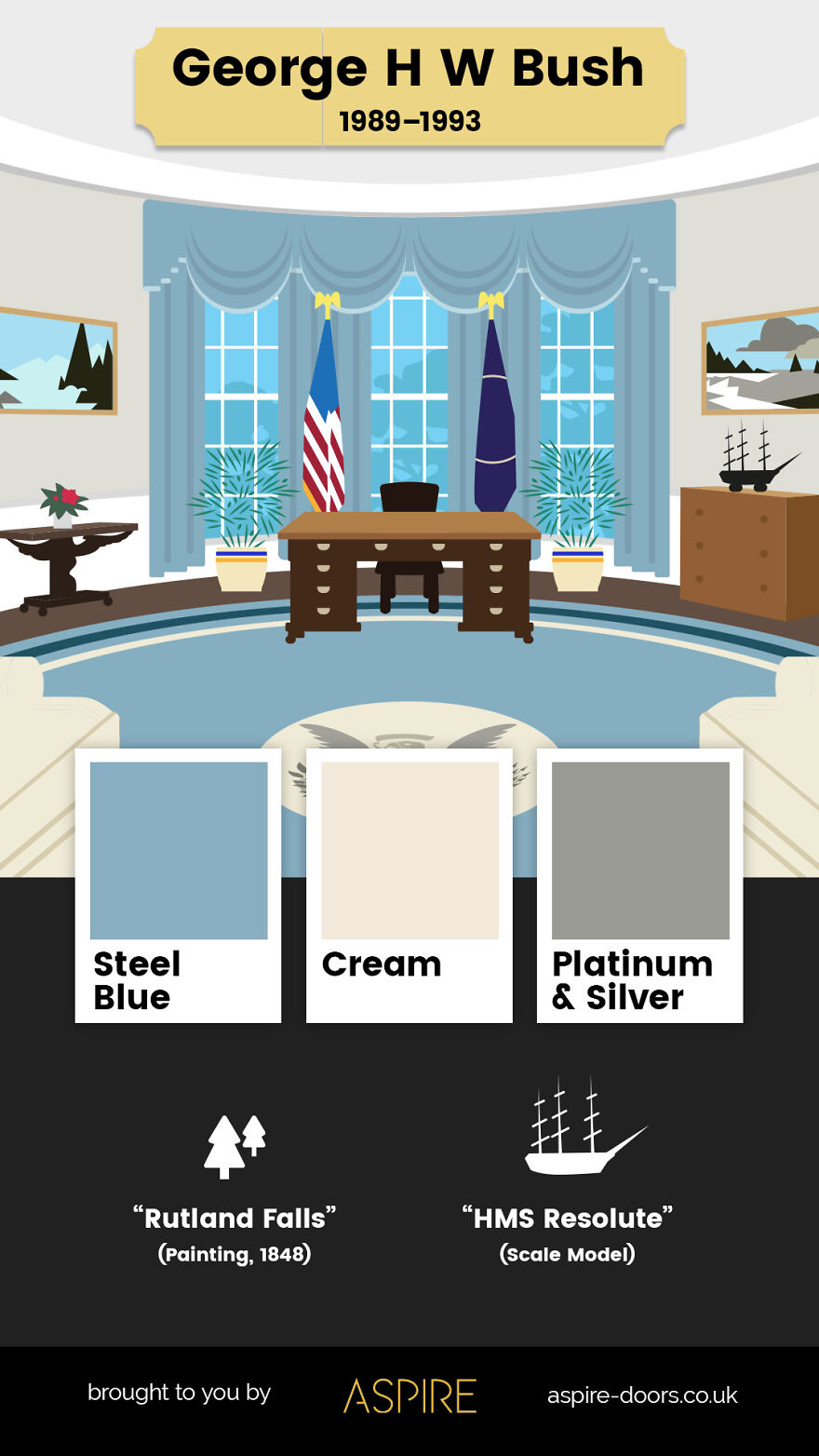 “George Bush Snr carried out a single, 4-year Presidency in the White House.

Like his son, George Bush Snr used a similar diluted color scheme throughout the White House. The main colors found in the Oval Office were steel blue, cream, and platinum.

George H.W. Bush Snr is the only President to display a scale model in the Oval Office to date. Bush Snr’s painting was curated in 1848 and was a picture of nature, suggesting a feeling of calm and tranquility; the painting is titled “Rutland Falls.” For his scale model, Bush Snr went for the empowering HMS Resolute ship. The contrast between the painting and the scale model is quite evident.” 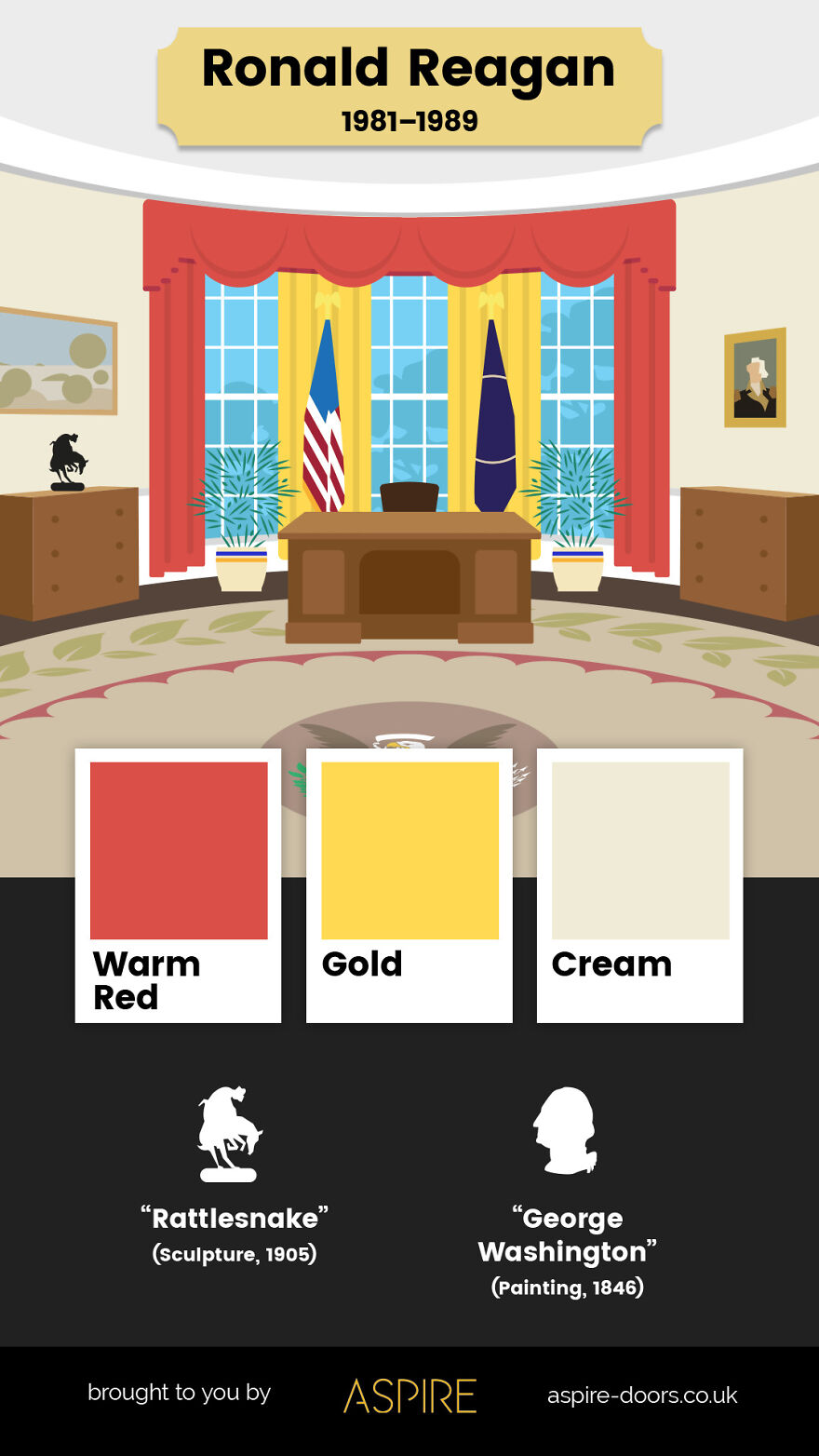 Reagan displayed a painting and sculpture on either side of him for his entire presidency. The painting of George Washington, titled “George Washington” (who’d have guessed?), was painted in 1846. His chosen sculpture, created in 1905, was titled “Rattlesnake” (Remington) and depicted a cowboy riding a horse that was rearing up after being startled by a rattlesnake on the ground.

Fun fact: George H.W. Bush Snr also had the Rattlesnake sculpture displayed during his time in the Oval Office.” 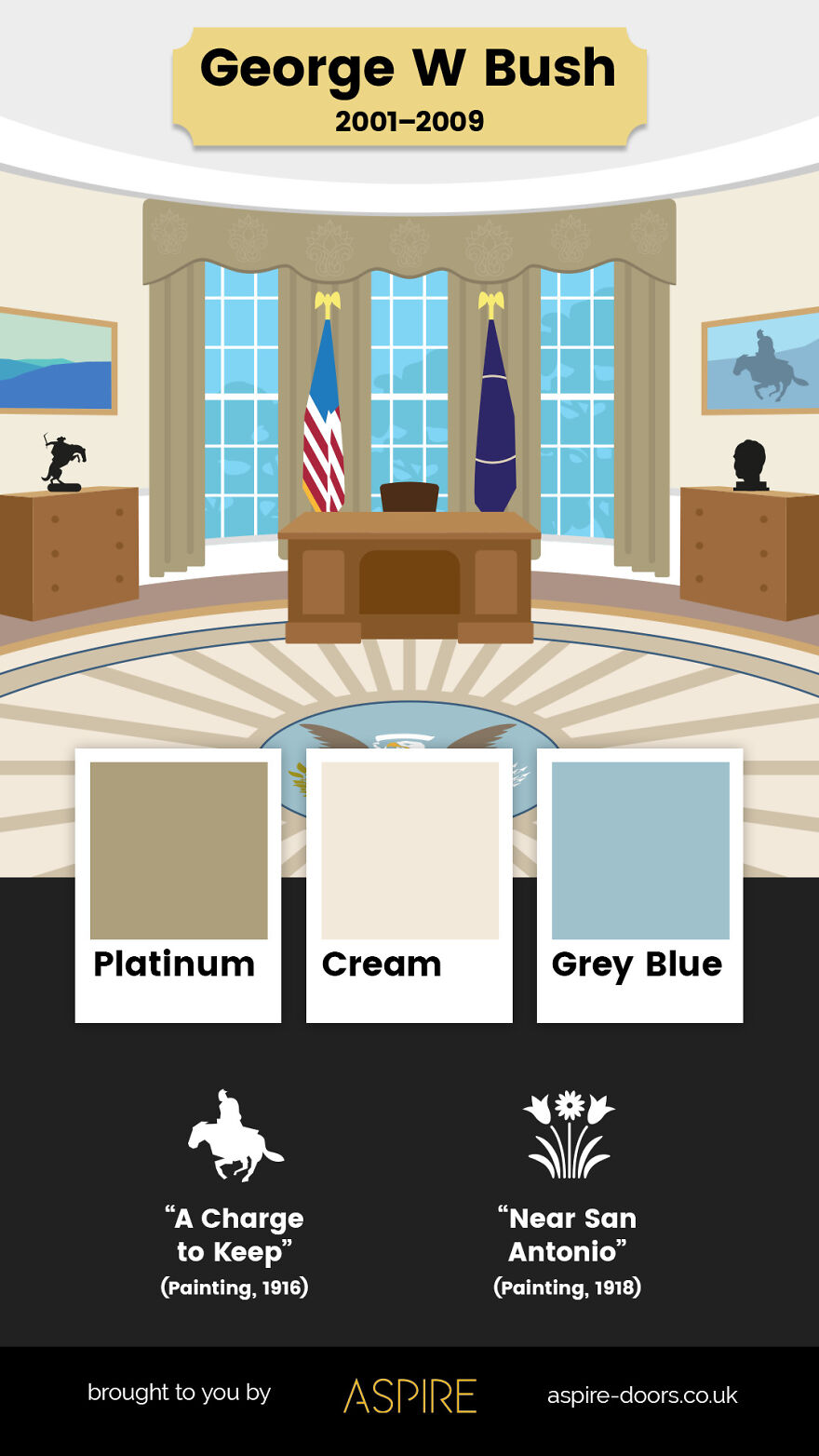 “Like Obama, George W. Bush also kept his Presidency for two elections, giving him a Presidential service of 8 years. Bush was the 43rd President of the United States; before that, he served as the Governor of Texas for 5 years.

In true gentlemanly fashion, Bush’s décor was minimalistic and muted. The soft color palette he chose for the Oval Office during his reign included platinum, cream, and grey-blue. Nothing flashy and over-the-top about this President, and interestingly, a similar color palette to that chosen by his father, George Bush Snr. 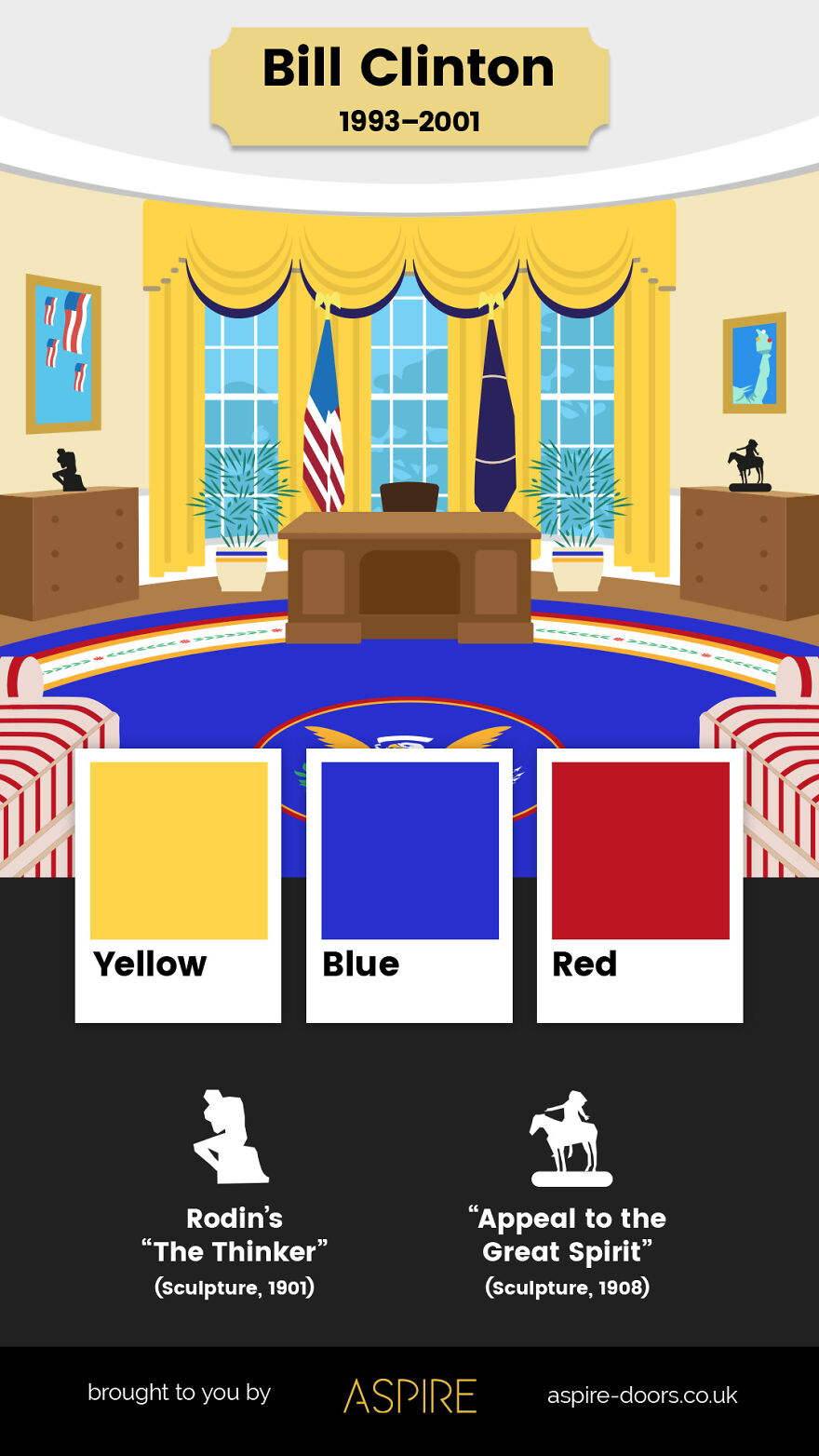 “Bill Clinton, another 8-year Presidential runner, took his seat in the Oval Office in 1993. Before his Presidency, Clinton was the Governor and Attorney General of Arkansas. His First Lady, Hillary Clinton, later became the first female to run for President of the United States. Sadly, she lost the election to Donald Trump.

Bill Clinton’s stint in the White House gave him enough time to decorate the house and the Oval Office as he saw fit. In stark contrast to his predecessor (and his successor), Clinton opted for bright, primary colors of red, yellow, and blue, no doubt to signify the power and fierceness he wanted to represent during his Presidential reign.

Bill Clinton decorated the Oval Office by using strong, authoritative statues. On one side, he had Rodin’s “The Thinker” statue, sculpted in 1901, and on the other side, he had “Appeal to the Great Spirit” from 1908.” 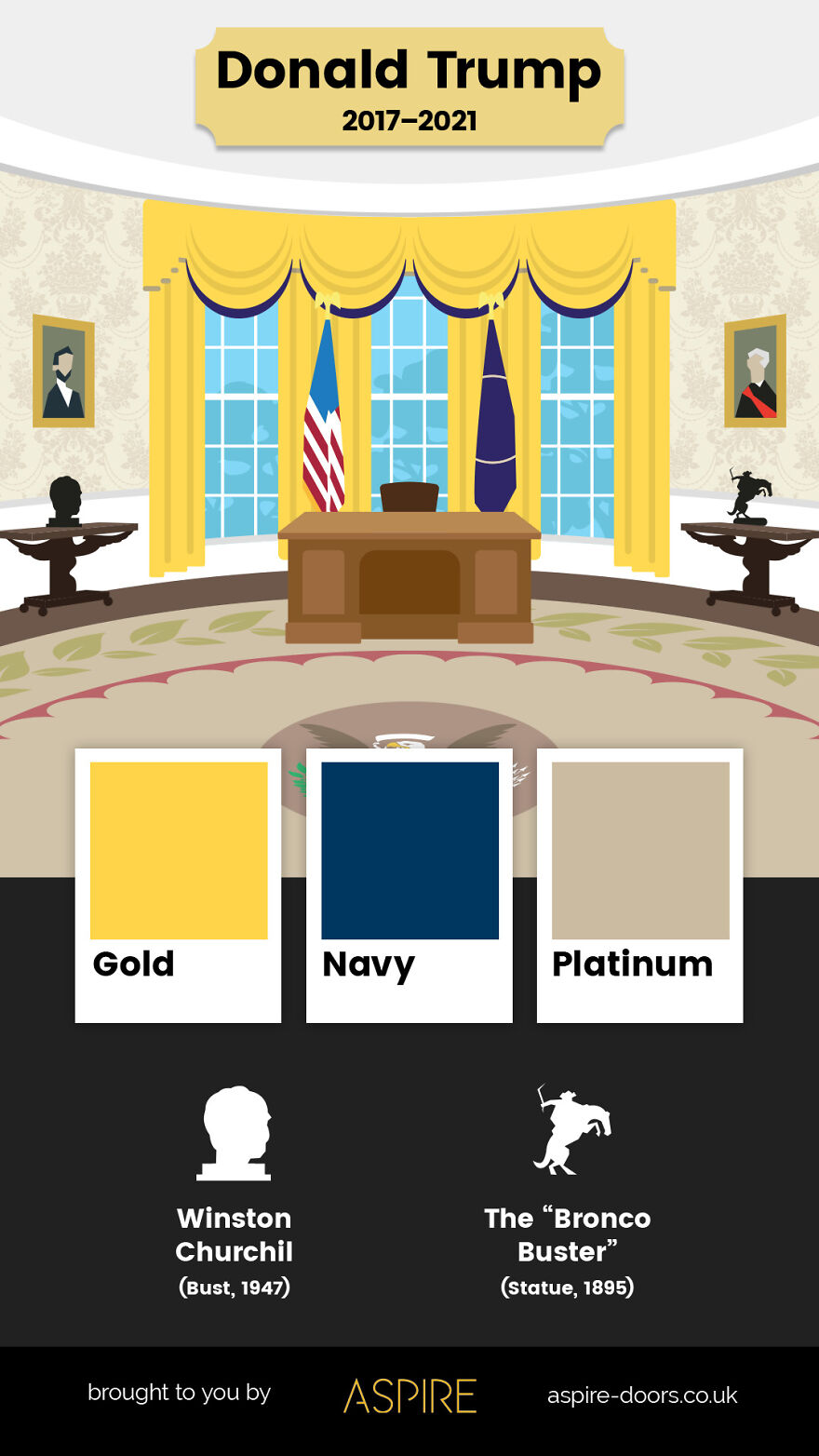 “During Trump’s Presidency, he had a complete White House renovation that lasted 17 days and reportedly cost $1.75 million; a little more than what Obama spent on renovations during his Presidency, but who’s surprised?

Donald Trump’s décor choices seemed to be a merge between George W. Bush and Bill Clinton; he went for a rich color palette of gold, navy, and platinum. If that doesn’t scream “I AM PRESIDENT,” then we don’t know what does!

Interestingly, the Oval Office’s artwork during Trump’s Presidency was a 1947 bust of Winston Churchill and an 1895 statue of The “Bronco Buster.””