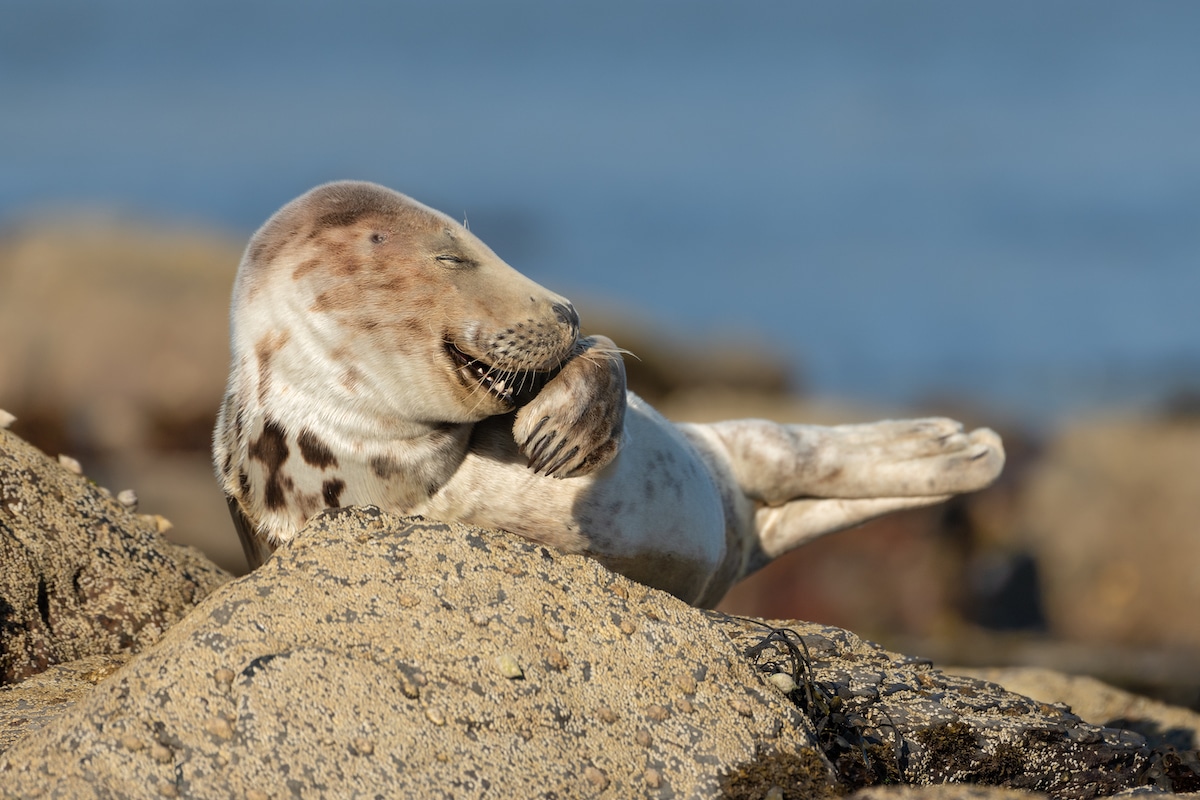 “Mr. Giggles” by Martina Novotna, Elvington, United Kingdom.
Animal: Grey seal
Location of shot: Ravenscar
“Grey seal pup appears to be giggling. I loved the expression captured. It looks so human-like. I was lying on a rocky beach for hours, as motionlessly as possible, patiently waiting for seal life to unfold around me. This seal pup came onto the shore for a bit of rest and ended up sleeping on its chosen rock for hours before the incoming tide forced it to move more inland. Occasionally, it would stretch and yawn and it was one of the yawns that led to this expression, looking as if the seal was giggling.”

We could all use a little laughter in our lives and what better way to do so than by looking at some cute animals. As the 2021 comes closer to announcing a winner, they have selected this year’s finalists. The charming array of images show just how lively, and lovable, the animal kingdom can be. The contest, which began in 2015, continues to expand, with this year’s finalists showing the widest variety of animals in competition history.

Forty-two single images, as well as portfolio and video finalists, were placed on a shortlist. The winning photos will be announced mid-October, but for now, we can soak up the joy of these photographs. From a “giggling” baby seal to a grumpy bird to a tiger seeming like she’s lifting a log, there’s so much to see and enjoy. The photographs are also a testament to the skill of the photographers. Capturing these animal behaviors takes both technical skill and patience, with some photographers following an animal for years to cultivate trust.

“We were overwhelmed with the number and quality of entries we received this year, with well over 7,000 photos submitted from every corner of the globe,” said awards co-founder Paul Joynson-Hicks MBE. “It was an amazing turnout, especially given the impact of the pandemic. The huge number of images we receive every year illustrates the appetite there is to engage with conservation and reminds us that wildlife truly is incredible and hilarious and, we must do all we can to protect it.”

As always, the Comedy Wildlife Photography Awards uses humor to help with important conservation issues. This year, 10% of its total net revenue will go to supporting . This initiative helps safeguard wild orangutans in and around Gunung Palung National Park, Borneo.

So while you wait for the winner to be announced, let your voice be heard. Voting for the People’s Choice Award is now open through October 10. Head over to photo and you might also win an iPad.

Check out some of the hilarious finalists of the 2021 Comedy Wildlife Photography Awards. 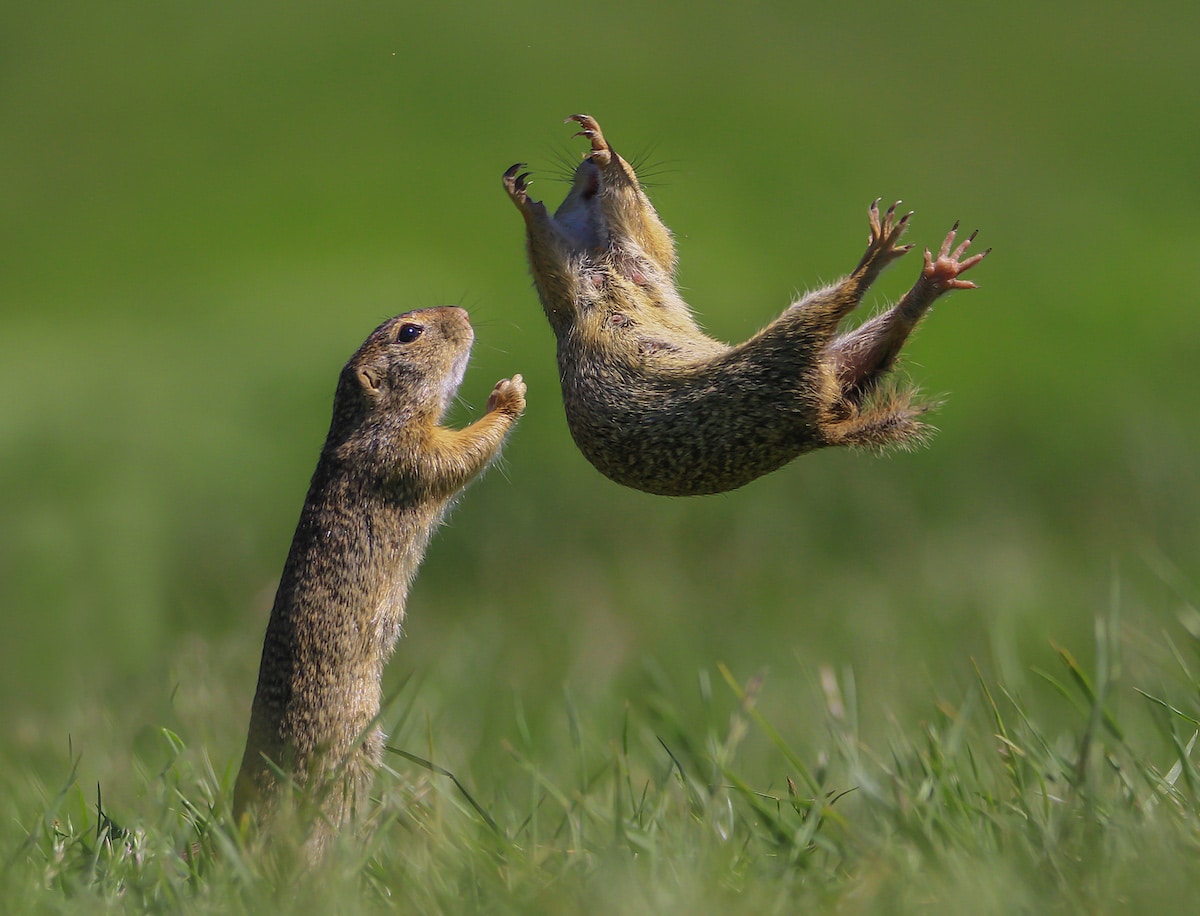 “I Got You!” by Kranitz Roland, Agfalva, Hungary.
Animal: Spermophile
Location of shot: Hungary
“I spent my days in my usual ‘gopher place’ and yet again, these funny little animals haven’t belied their true nature.” 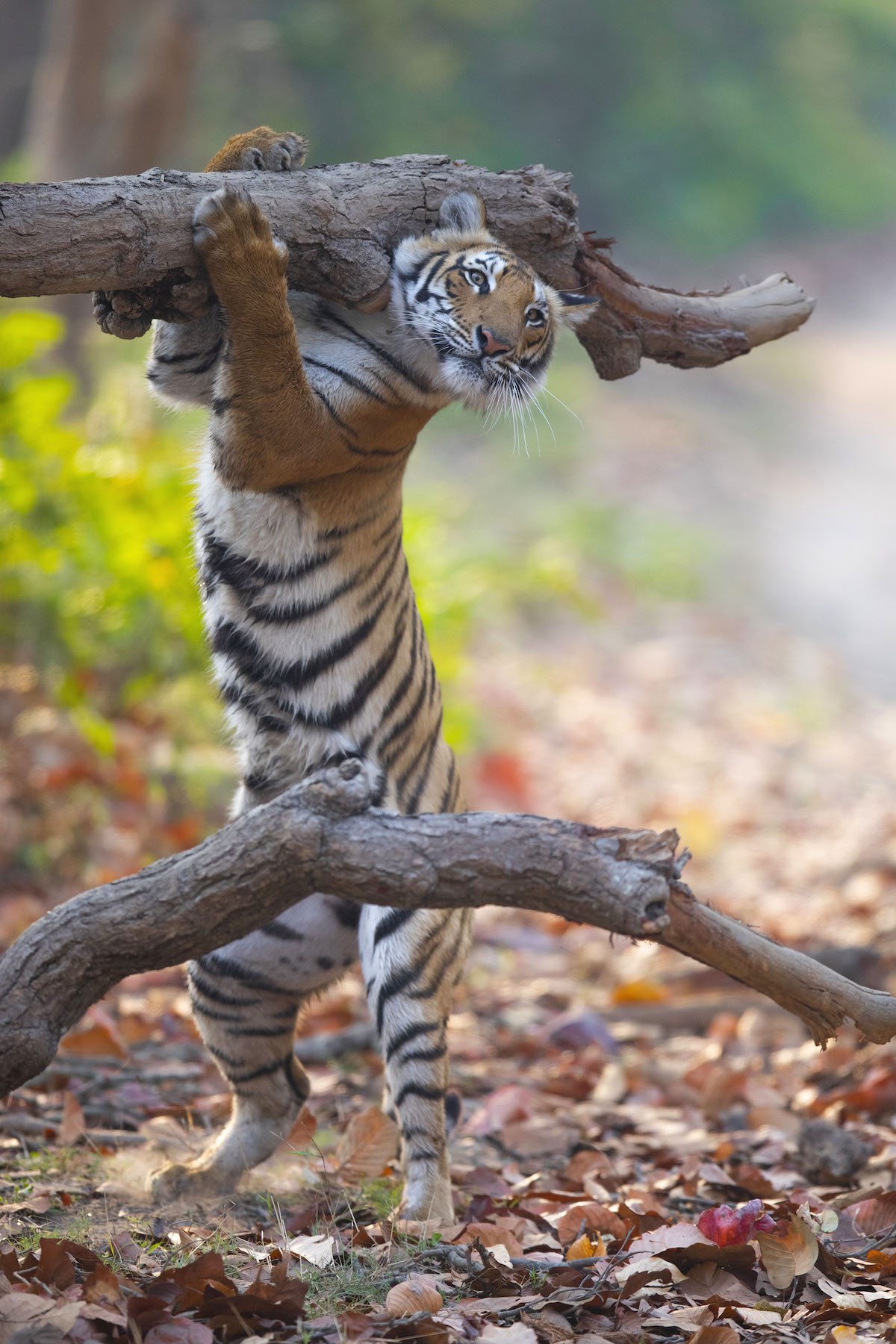 “Smoked Deer for Dinner” by Siddhant Agrawal, Pondicherry, India.
Animal: Tiger
Location of shot: Jim Corbett National Park India
“I have been following the family of a tigress called Paaro in India’s Jim Corbett National Park for many years. This is her daughter who has stood on her hind limbs to be able to scratch her face with a log. But, it appears as if she is carrying the log on her shoulders.” 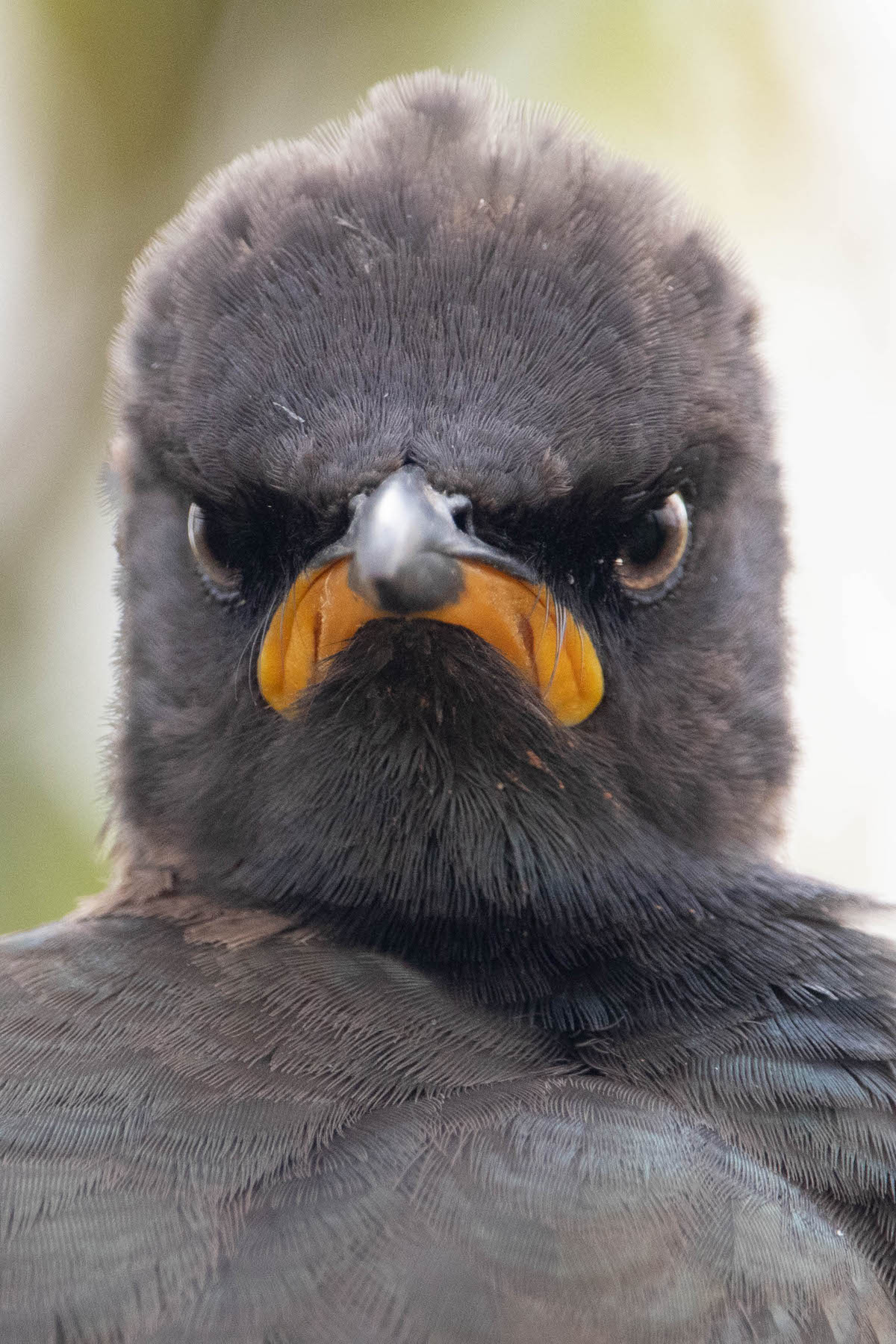 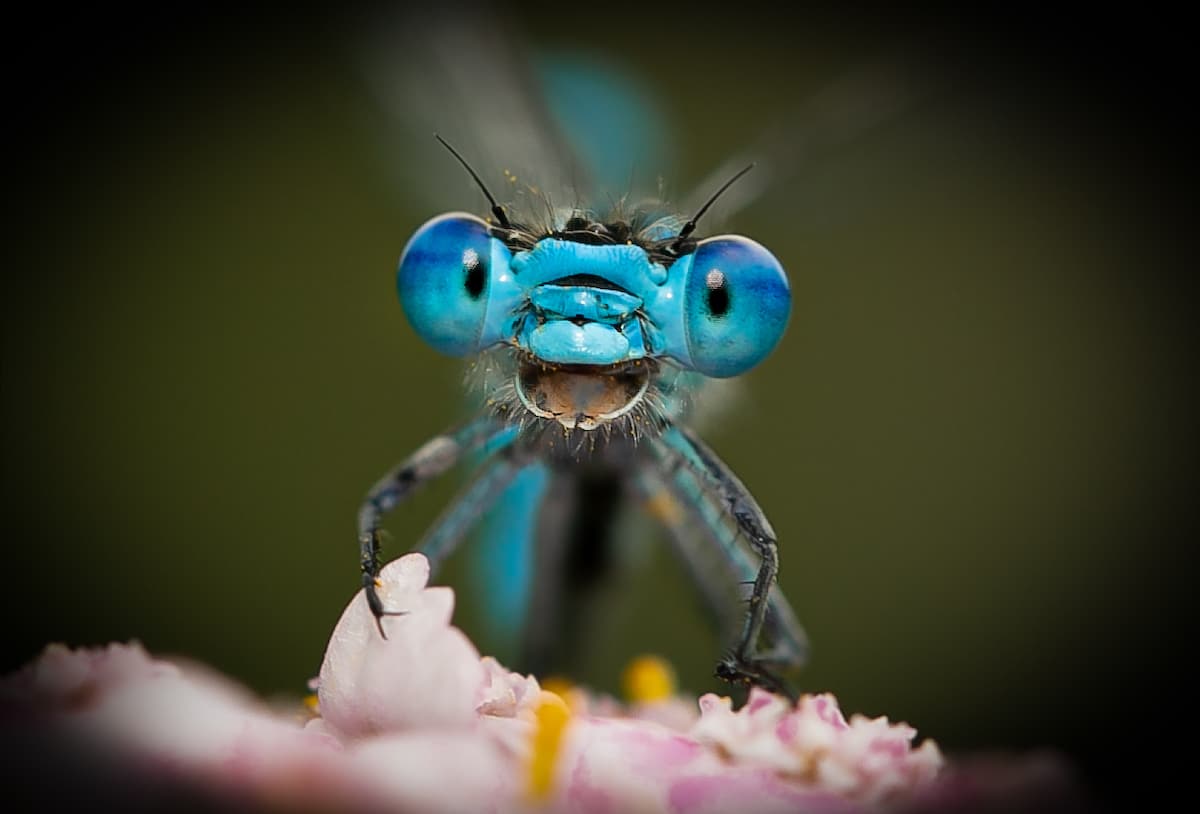 “Don’t Worry. Be Happy” by Axel Bocker, Germany.
Animal: Dragonfly
Location of shot: Hemer, Germany.
“A Dragonfly early in the morning on a flower looks into my camera and it seems as if it laughing. The year 2020/2021 was very hard for everybody because of Corona. But when you go outside and watch carefully the Beauty of our nature, then problems seems to get less for me. So if I have a bad day this image make me give a smile back.” 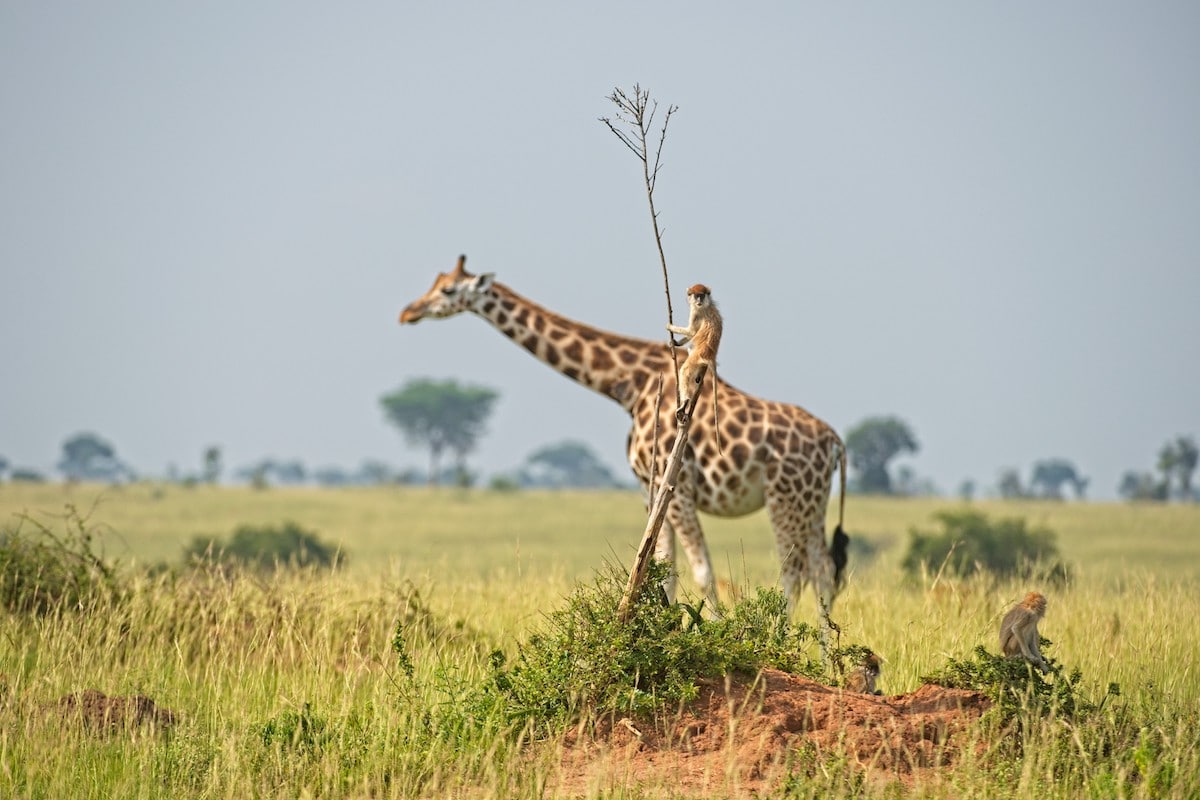 “Monkey riding a giraffe” by Dirk-Jan Steehouwer
Noordwijk, Netherlands.
Animal: Monkey and Giraffe
Location of shot: Murchison Falls NP, Uganda
“During a game drive we found a group of monkeys playing around with each other, jumping up and down from a bare branch.It was a joy to watch. After a while I saw a giraffe coming from the right. By the moment the giraffe did pass the branch, one of the monkeys was on his post to ride the giraffe.” 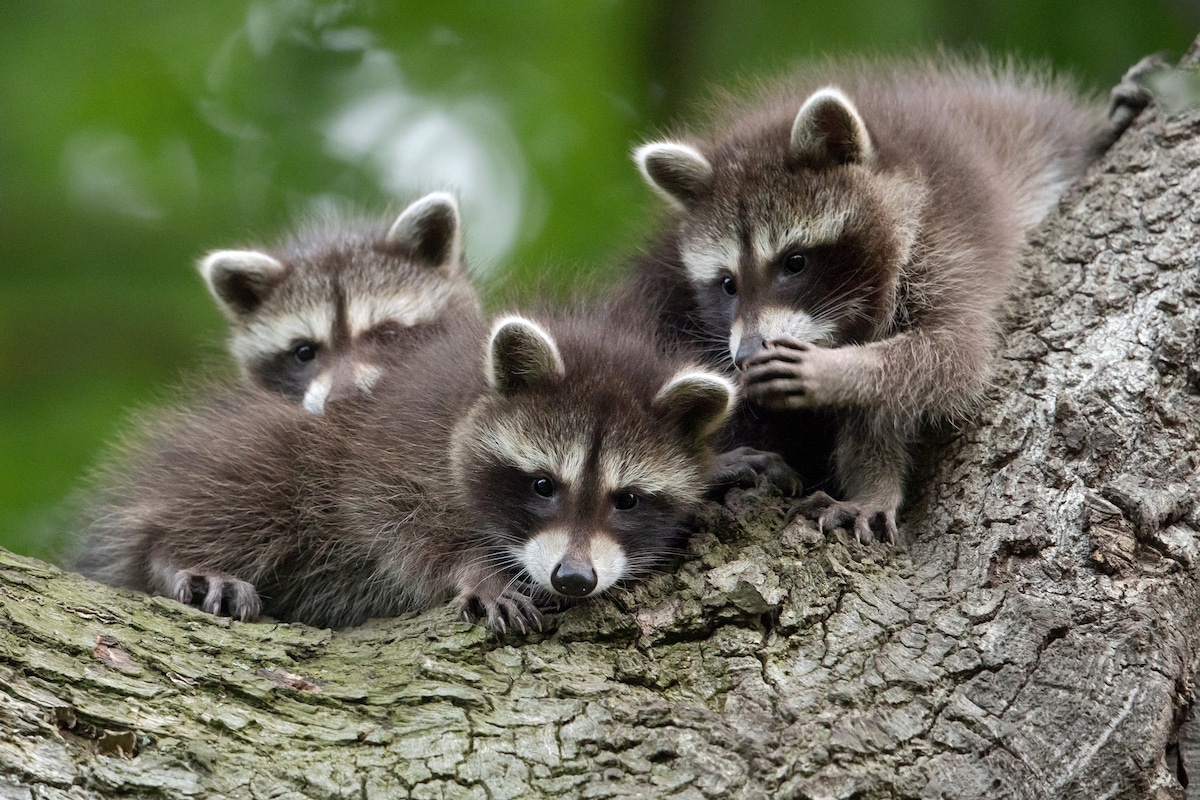 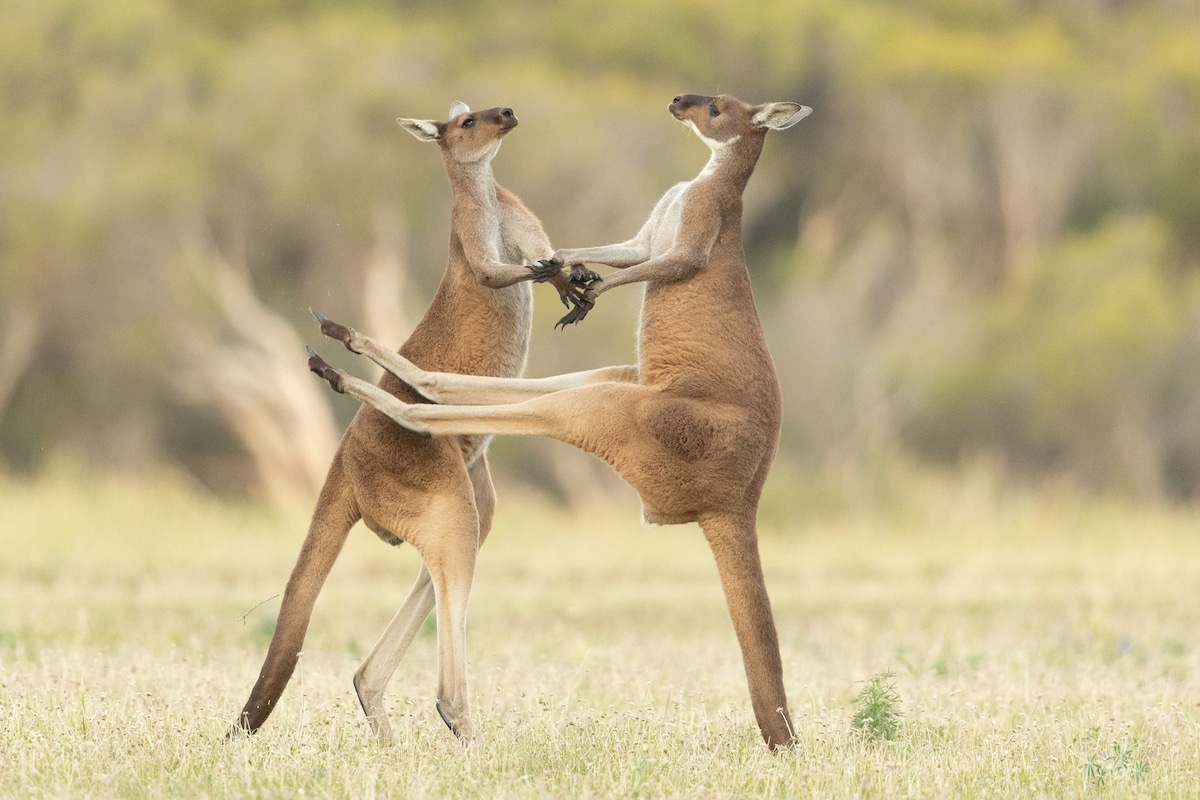 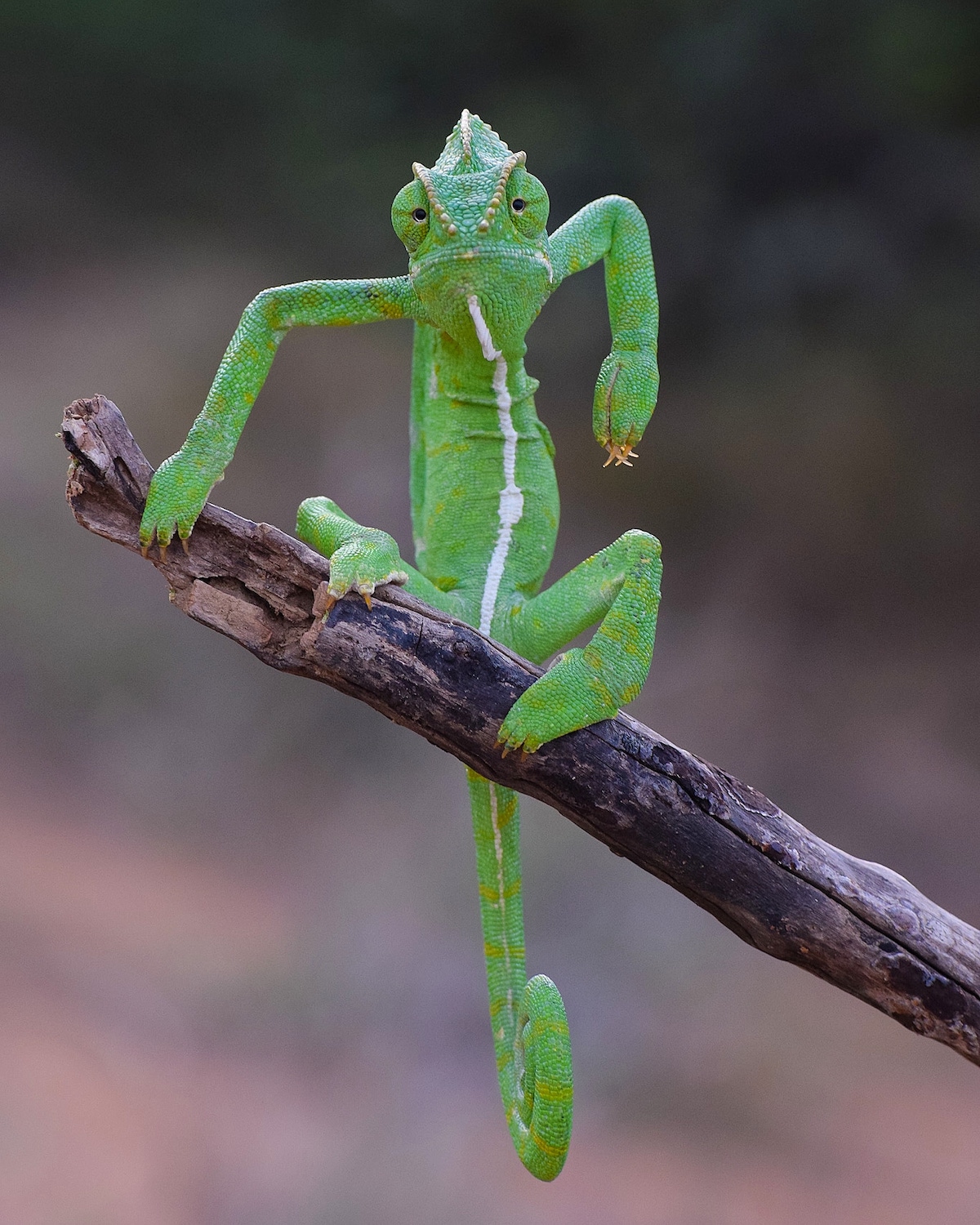 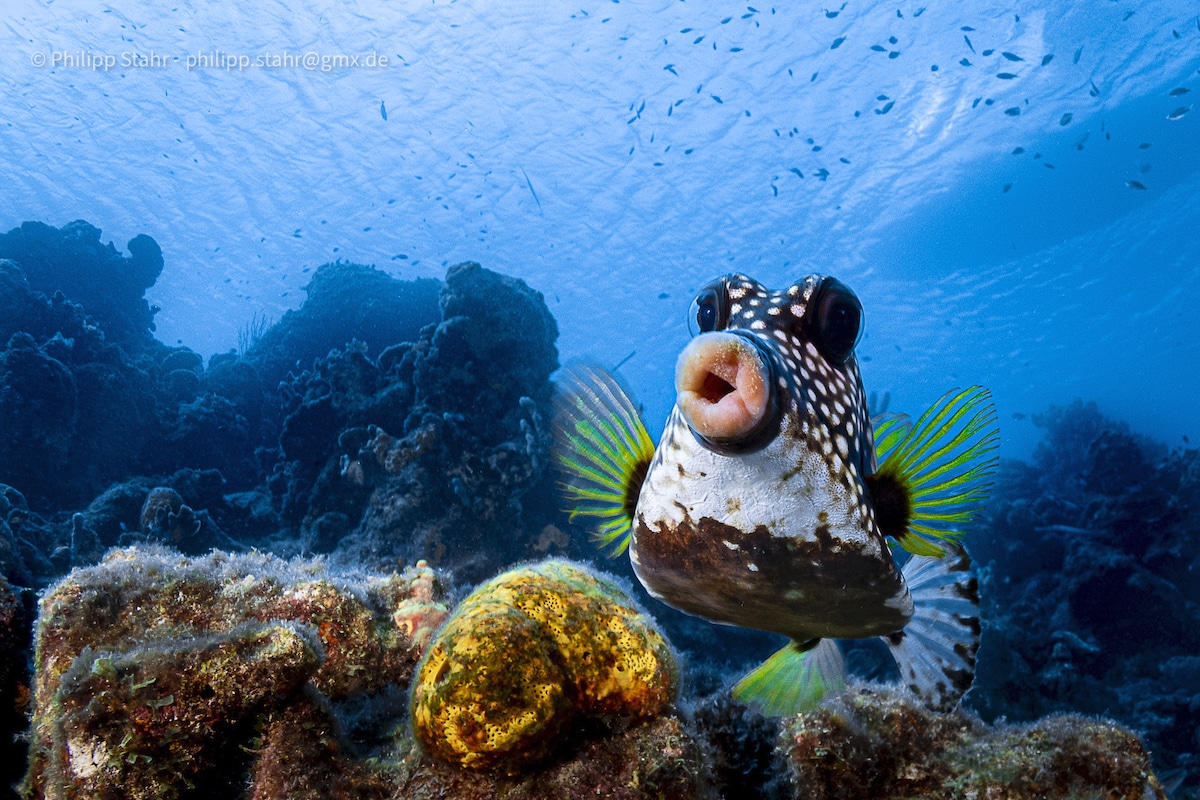 “Sweet lips are for kissing!” by Philipp Stahr, Mannheim, Germany.
Animal: Boxfish
Location of shot: Curaçao, Dutch Caribbean
“Usually box fish are difficult to take pictures of, since they do not have a problem of a diver coming close, but if you show interest, they always turn the back and not the face to you. That’s why I tried to swim 0.5m above the fish and showing no interest at all in him. At the same time, I had my camera not in front of me, but below at my chest pointing to the bottom. When the right moment came, I turned the camera 90 degrees to the front and just pointed and shot, hoping to have the fish in focus. Never expected to have its beautiful lips that close!” 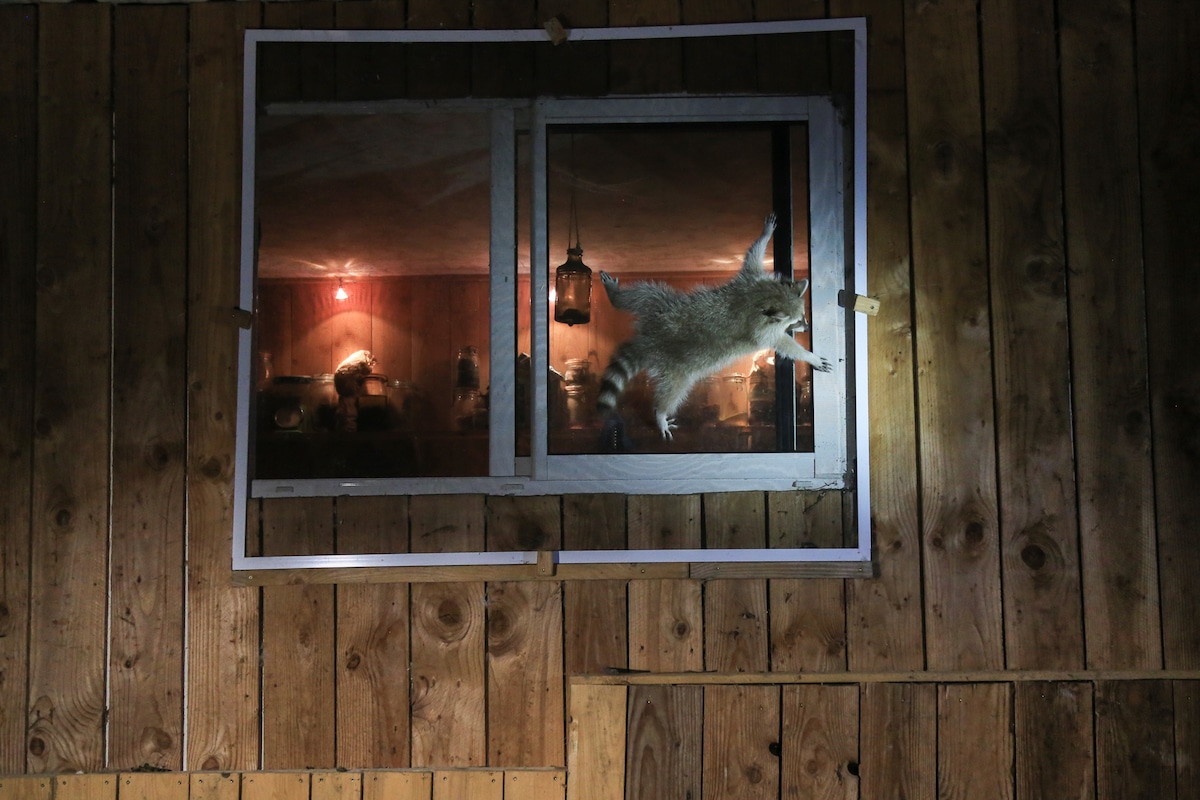 “How do you get that damn window open?” by
Nicolas de Vaulx, Draguignan, France.
Animal: Raccoon
Location of shot: France
“This raccoon spends his time trying to get into houses out of curiosity and perhaps also to steal food.” 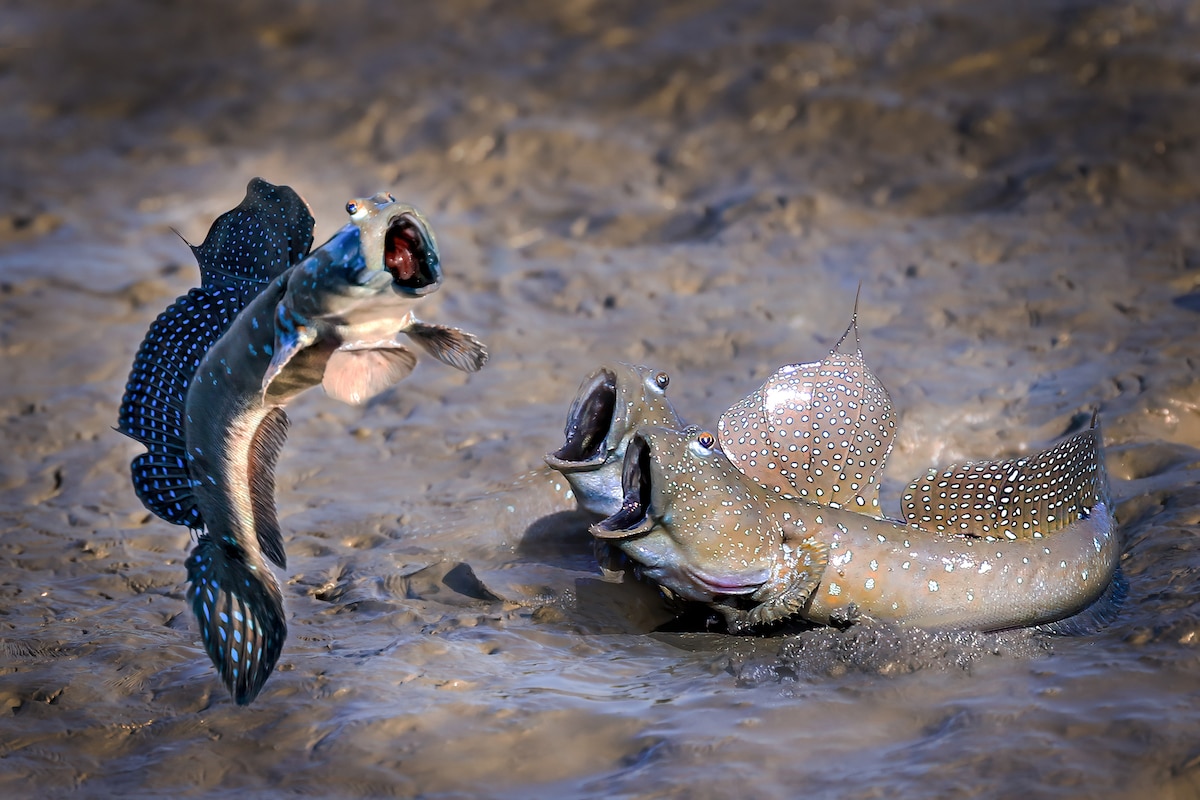 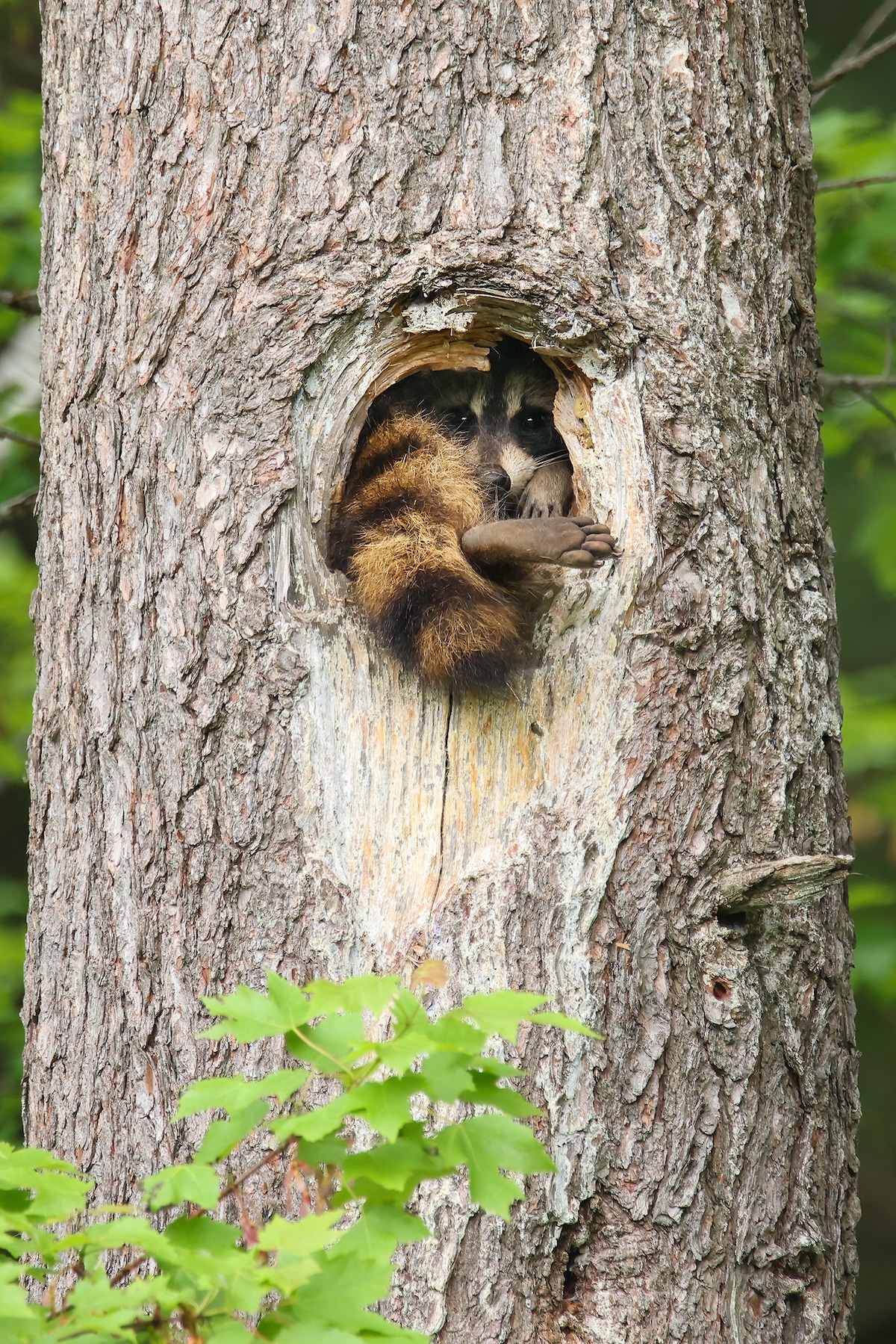 “Foot Jam” by Brook Burling, Wisconsin Rapids, United States.
Animal: Raccoon
Location of shot: Wisconsin Rapids WI
“There is a great big pine tree with a small to medium sized hole in it near my house where a young raccoon has called this home for the past year. Well this year it appears that the little raccoon has outgrown it’s tiny home as it barely fits!” 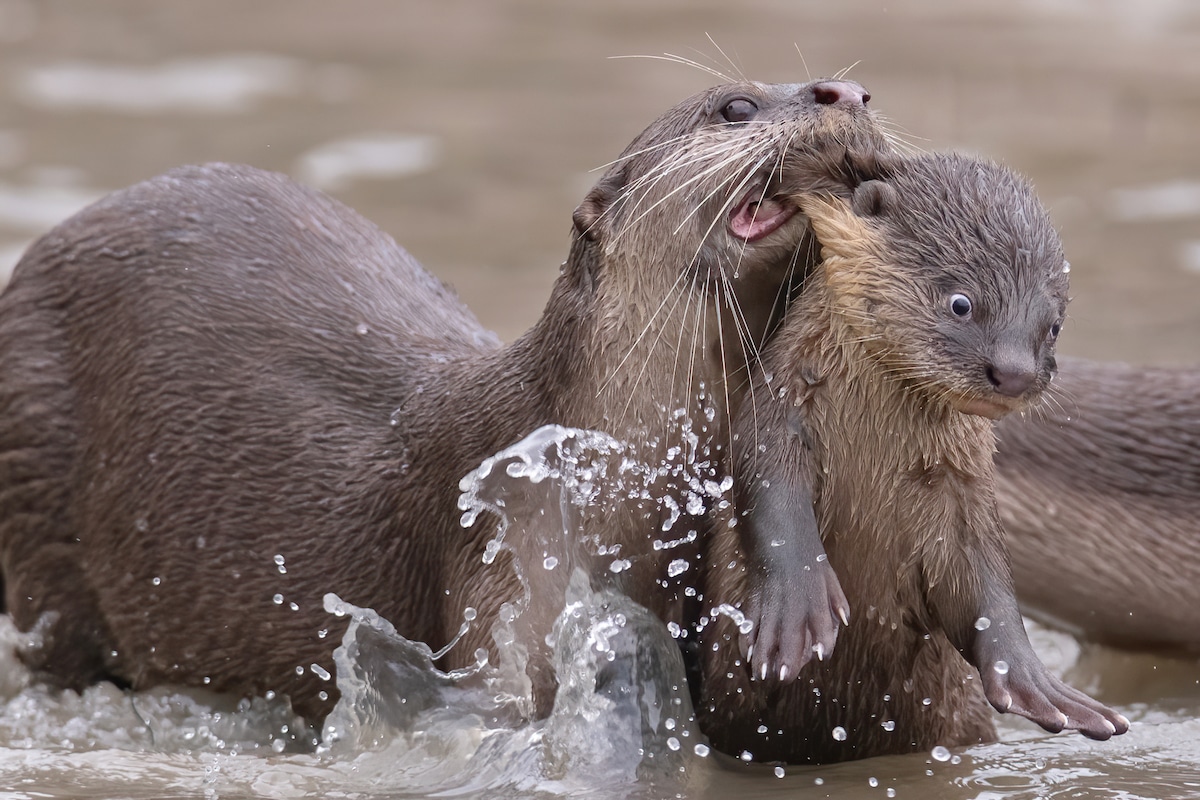