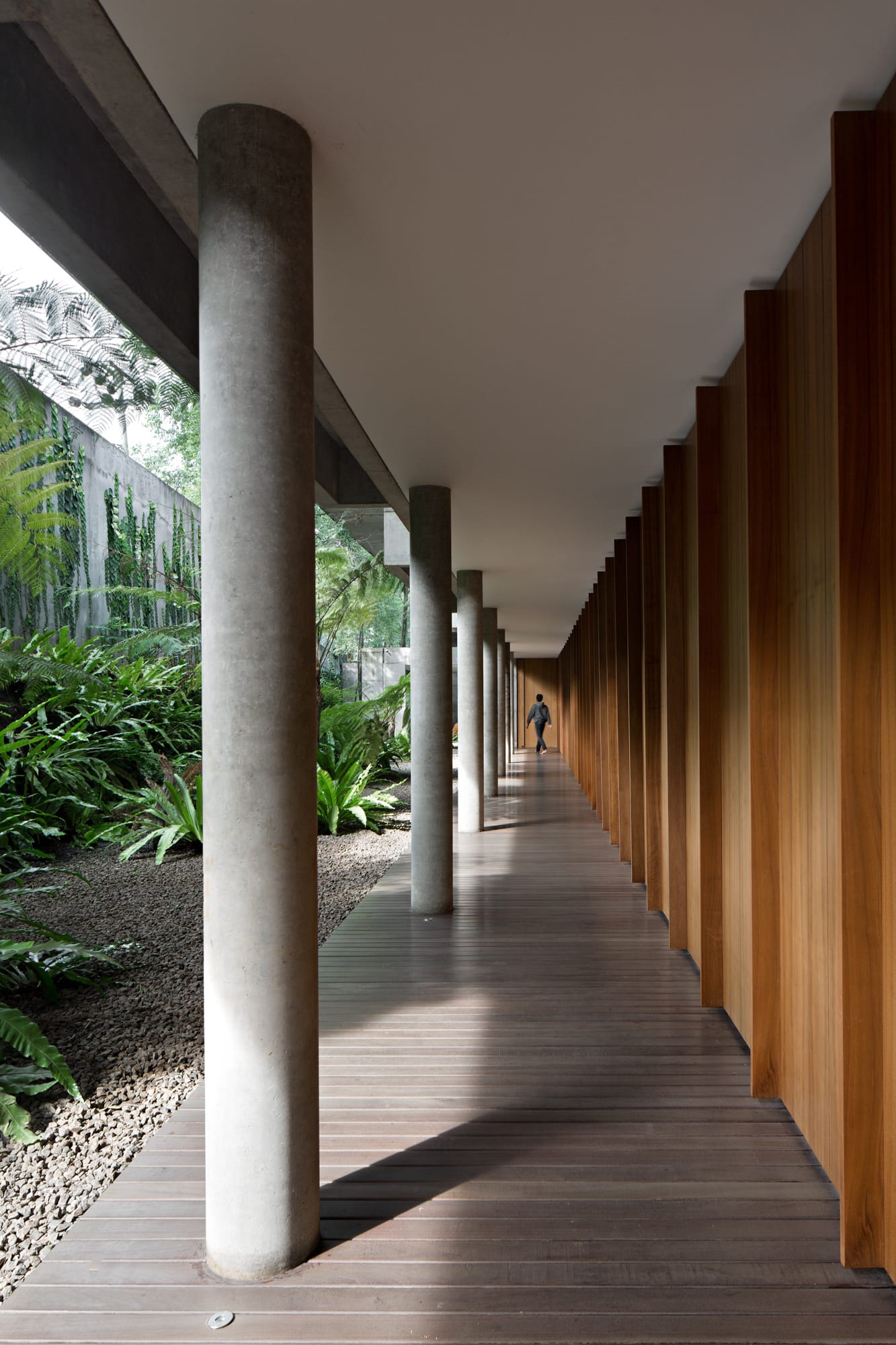 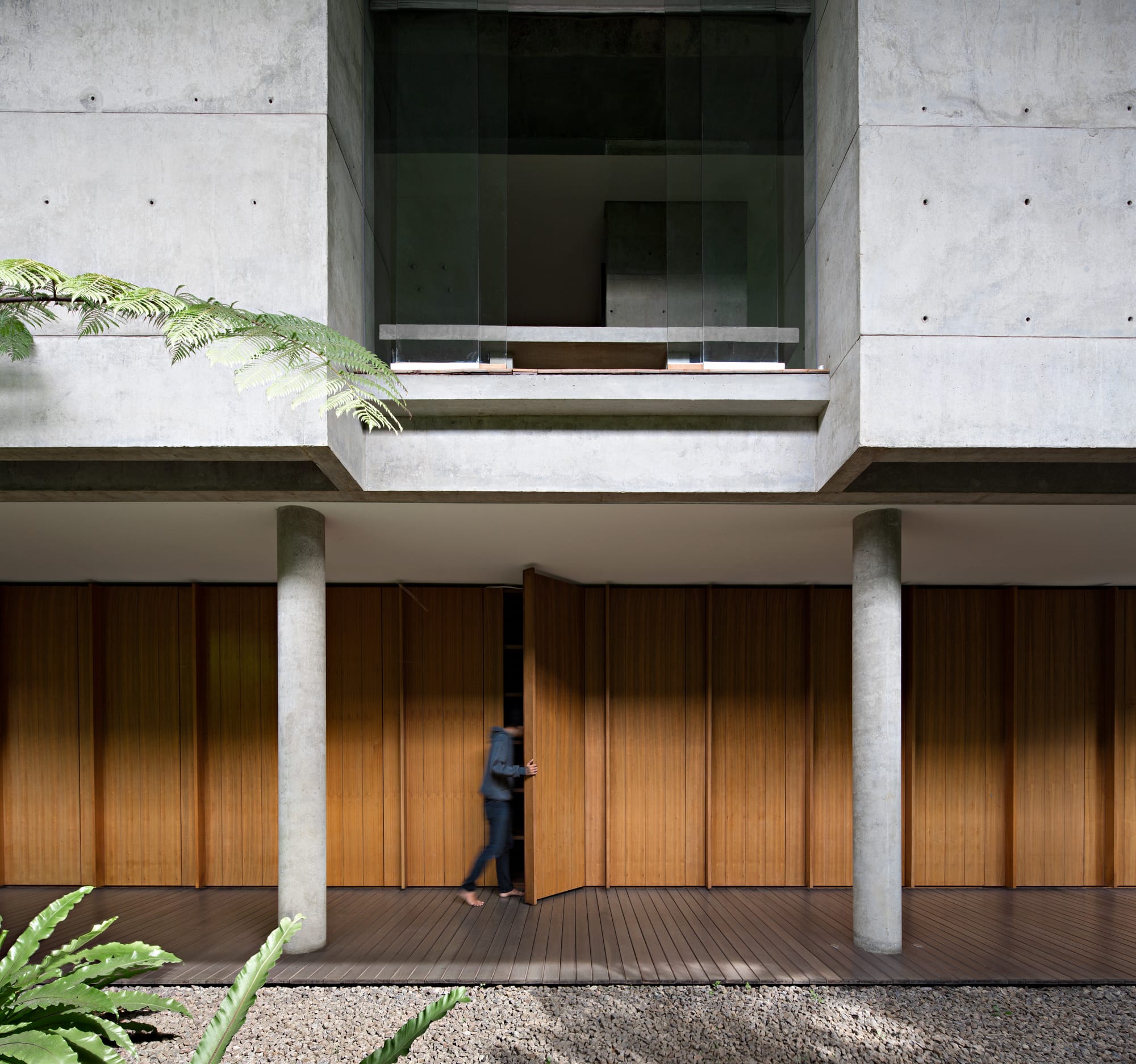 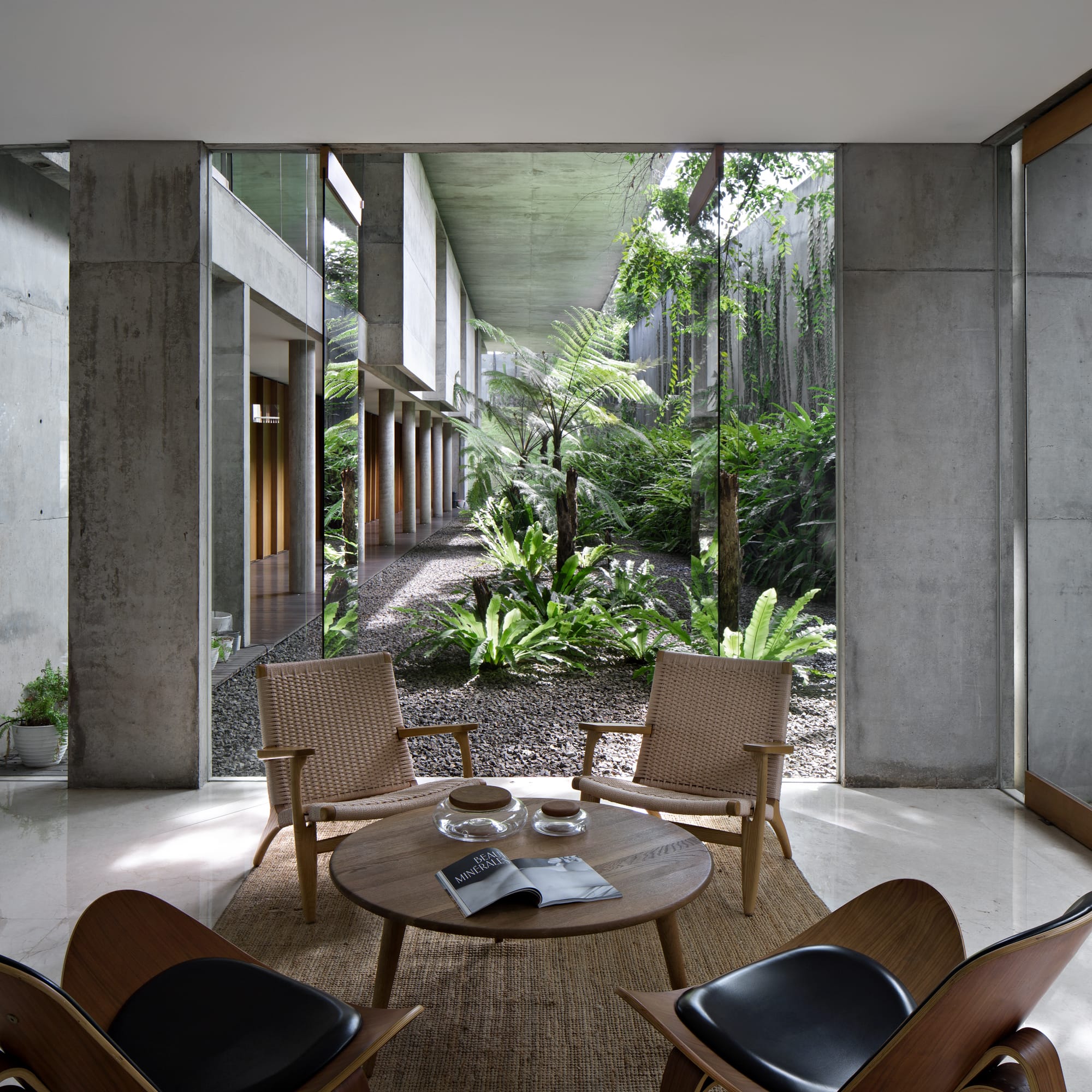 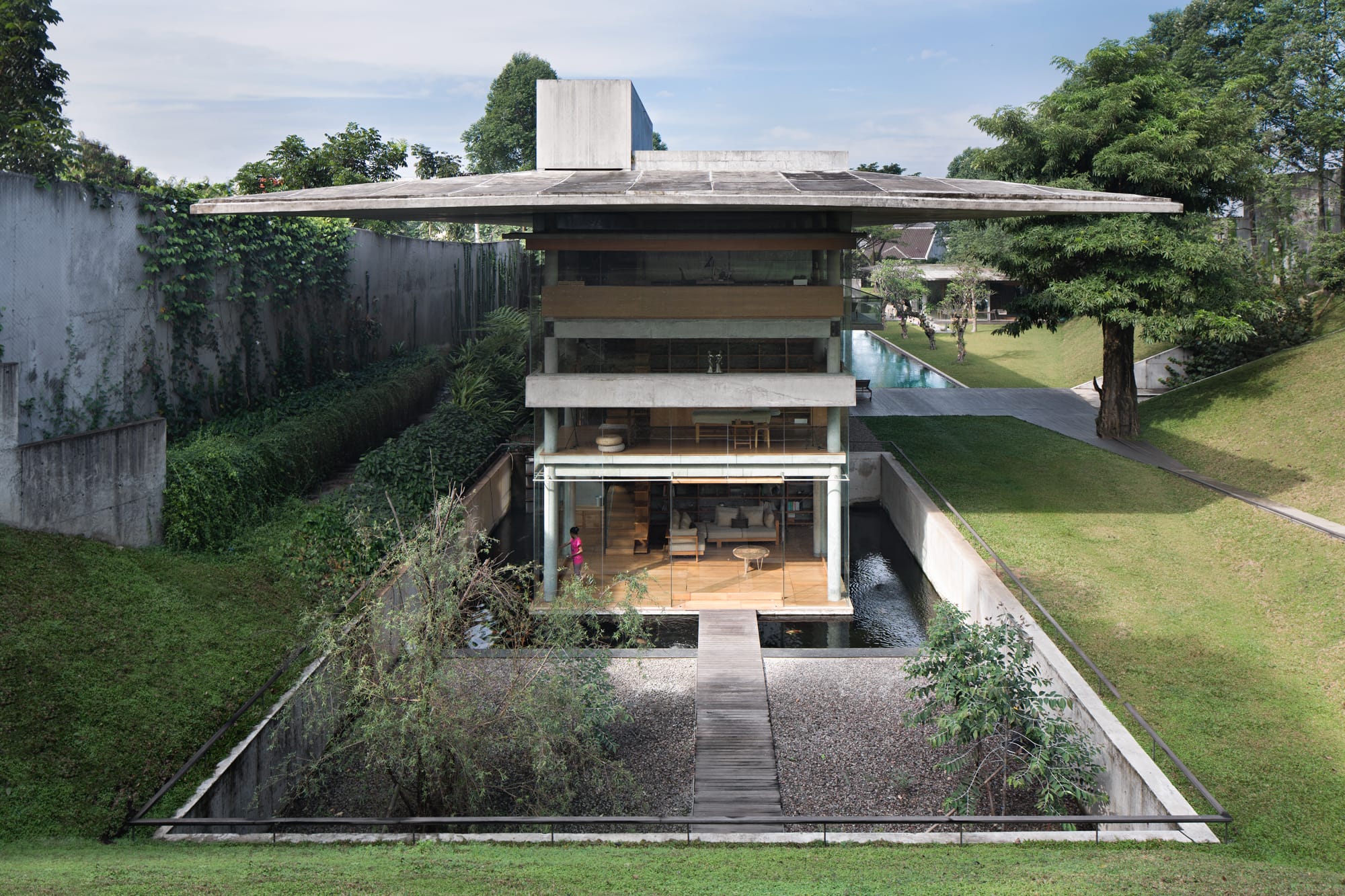 Living spaces within ’s, IH Residence in Bandung, Indonesia, are linked together by a thread of interconnected gardens. The home was not designed as a beautiful shell from which to enjoy surrounding views, but instead as a place where the garden is no longer restricted to the backyard. Flowing water, lush greenery, and tranquil rock gardens break through solid pre-cast concrete walls until they become seamlessly woven into all interior experiences.

A tech entrepreneur commissioned a family home that stood as a new, somewhat foreign figure in a sea of Dutch colonial houses dominating Bandung. Andra Matin took the most prominent aspect of these homes and remoulded it, creating a modern interpretation of the garden house for his client. The design focus was blurring the boundary between interior and exterior, the architectural team stating they “wanted to make sure the landscape could offer spatial experiences as dynamic as the buildings”. Defiantly, they didn’t disappoint!

A moat, filled with multi-coloured fish wraps the building’s footprint – a feature that fulfils all our fairy-tale fantasies. Vines crawl down concrete walls, and lush ferns grow alongside the main exterior corridor of the home. Each space creates a unique atmosphere; however, all combine to create a tranquil paradise that must feel impossible to ever want to leave. 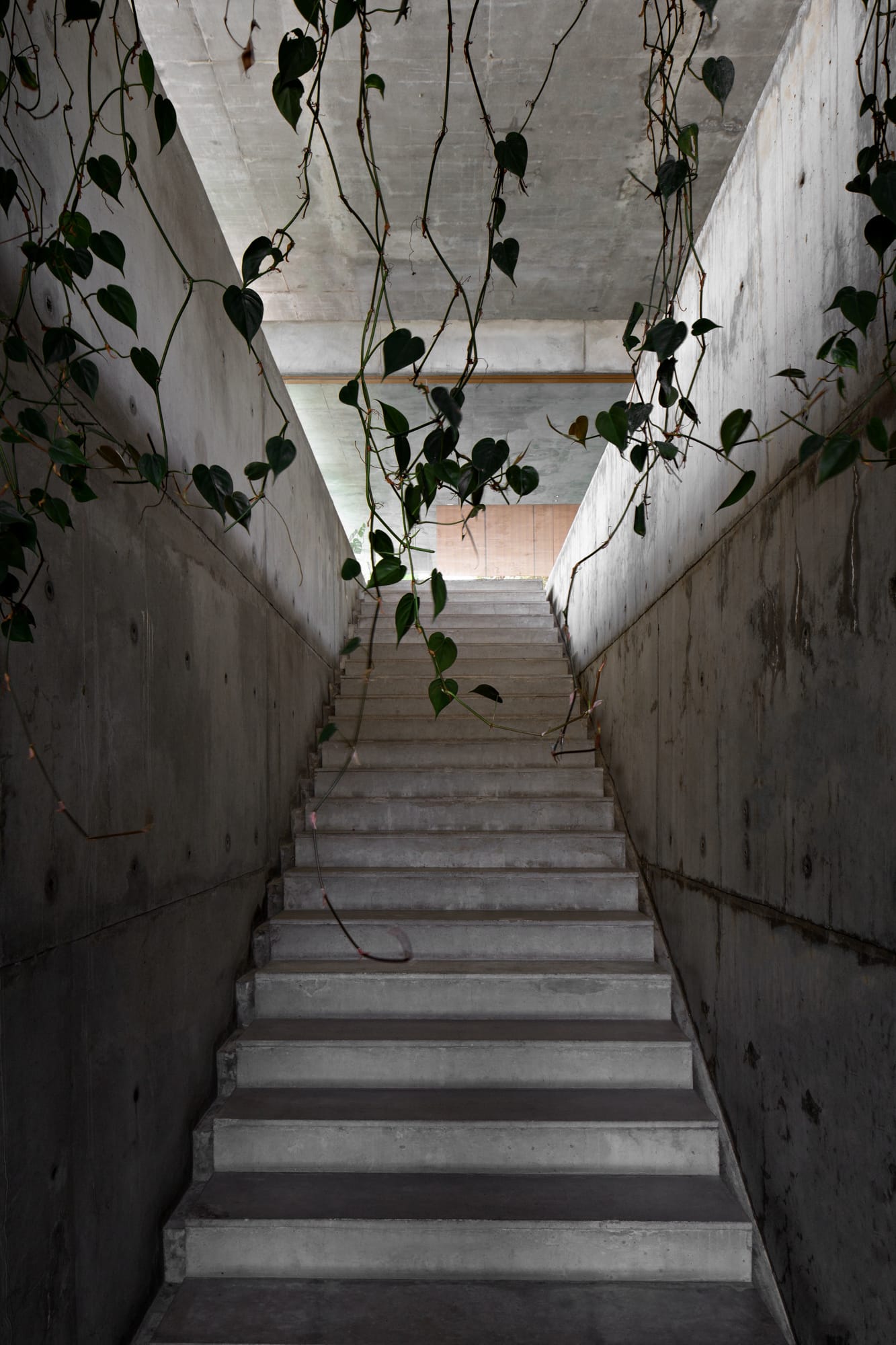 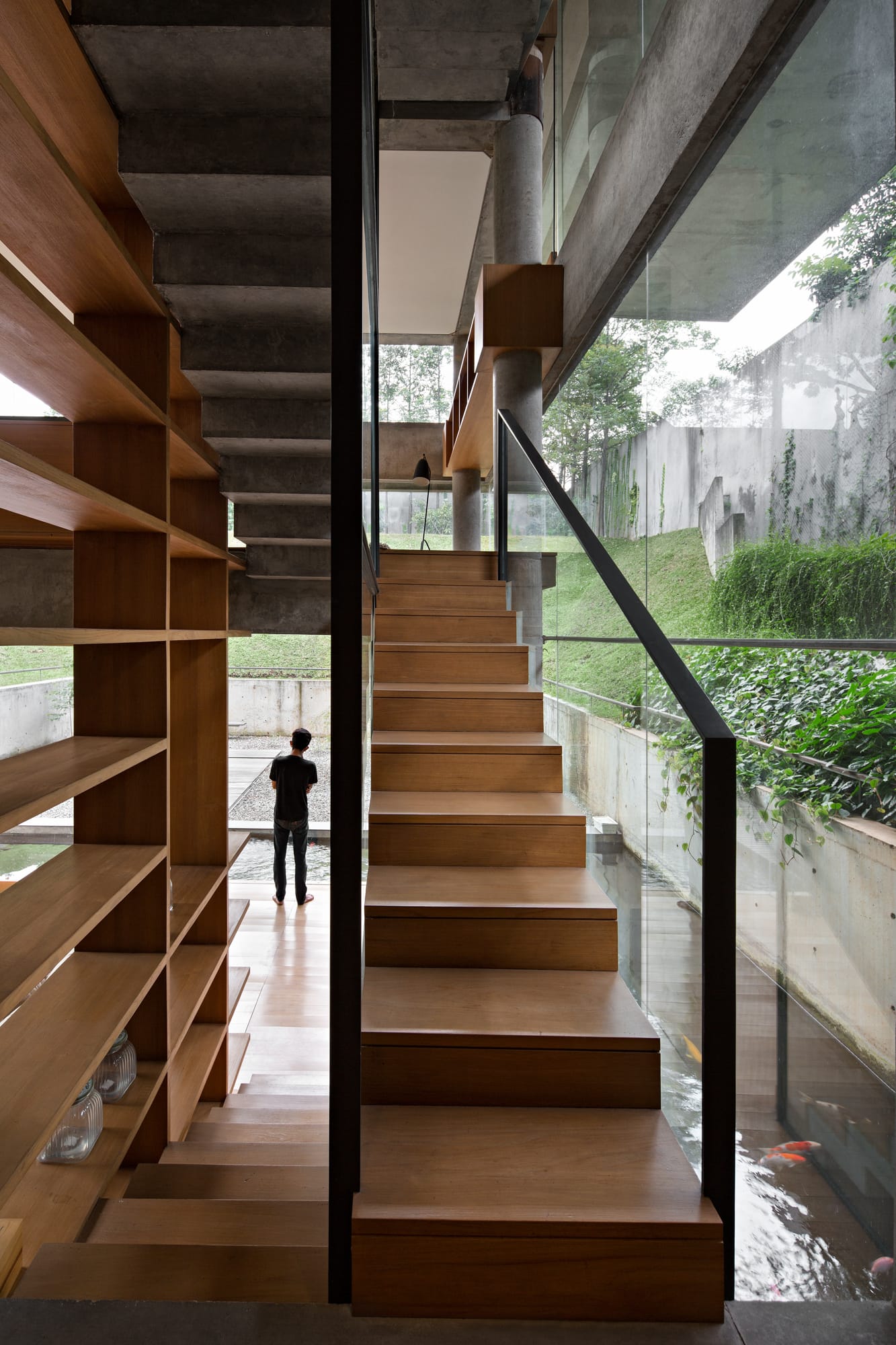 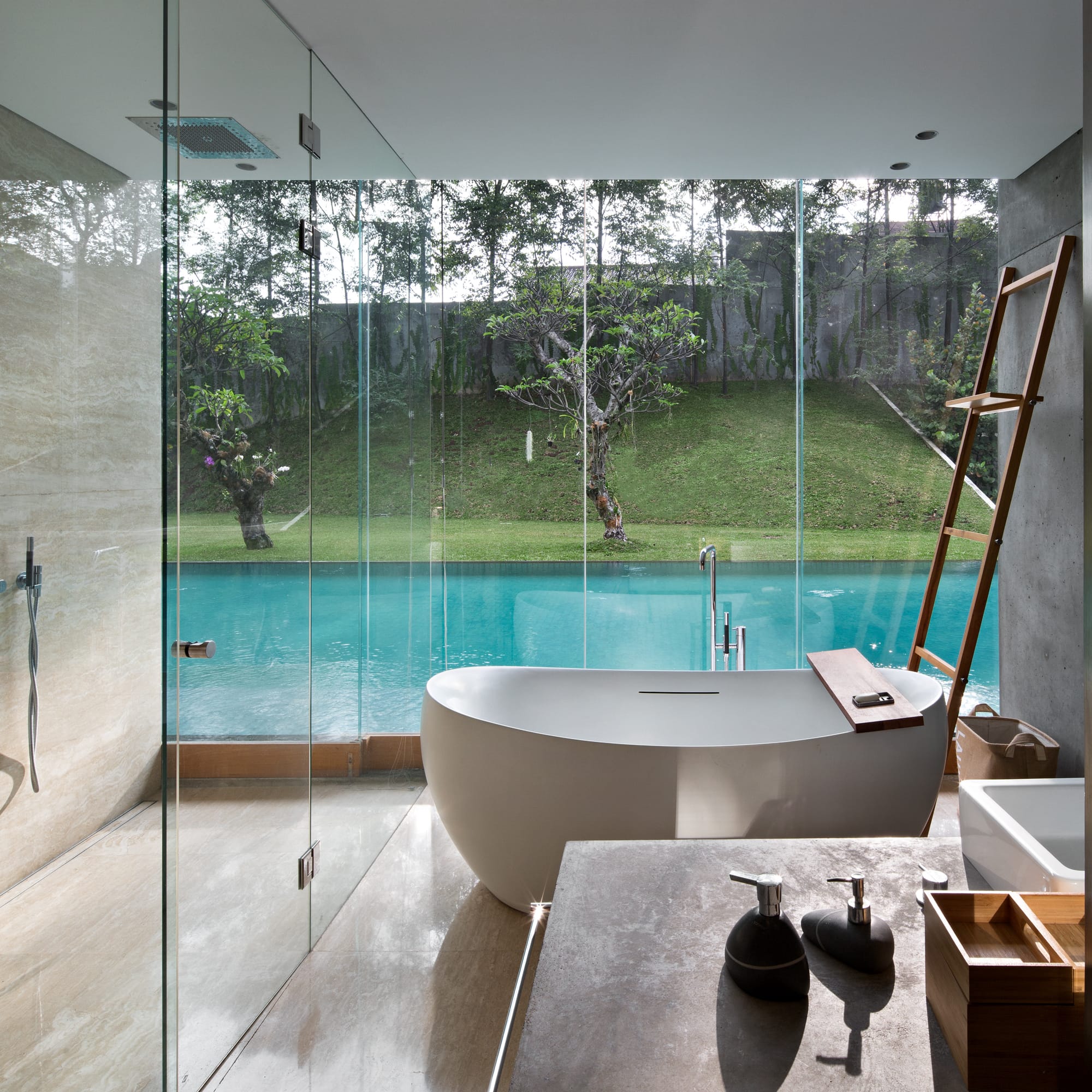 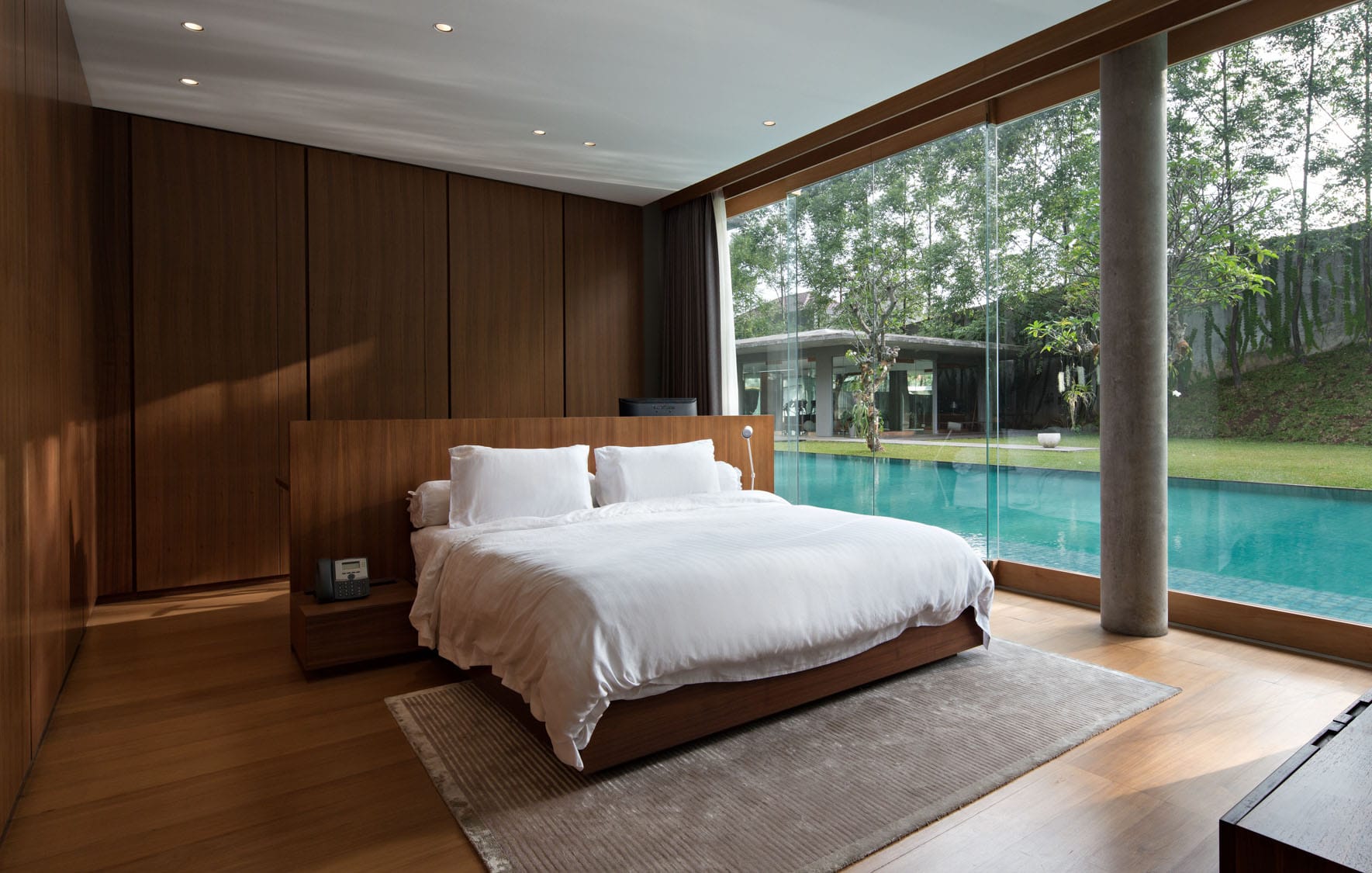 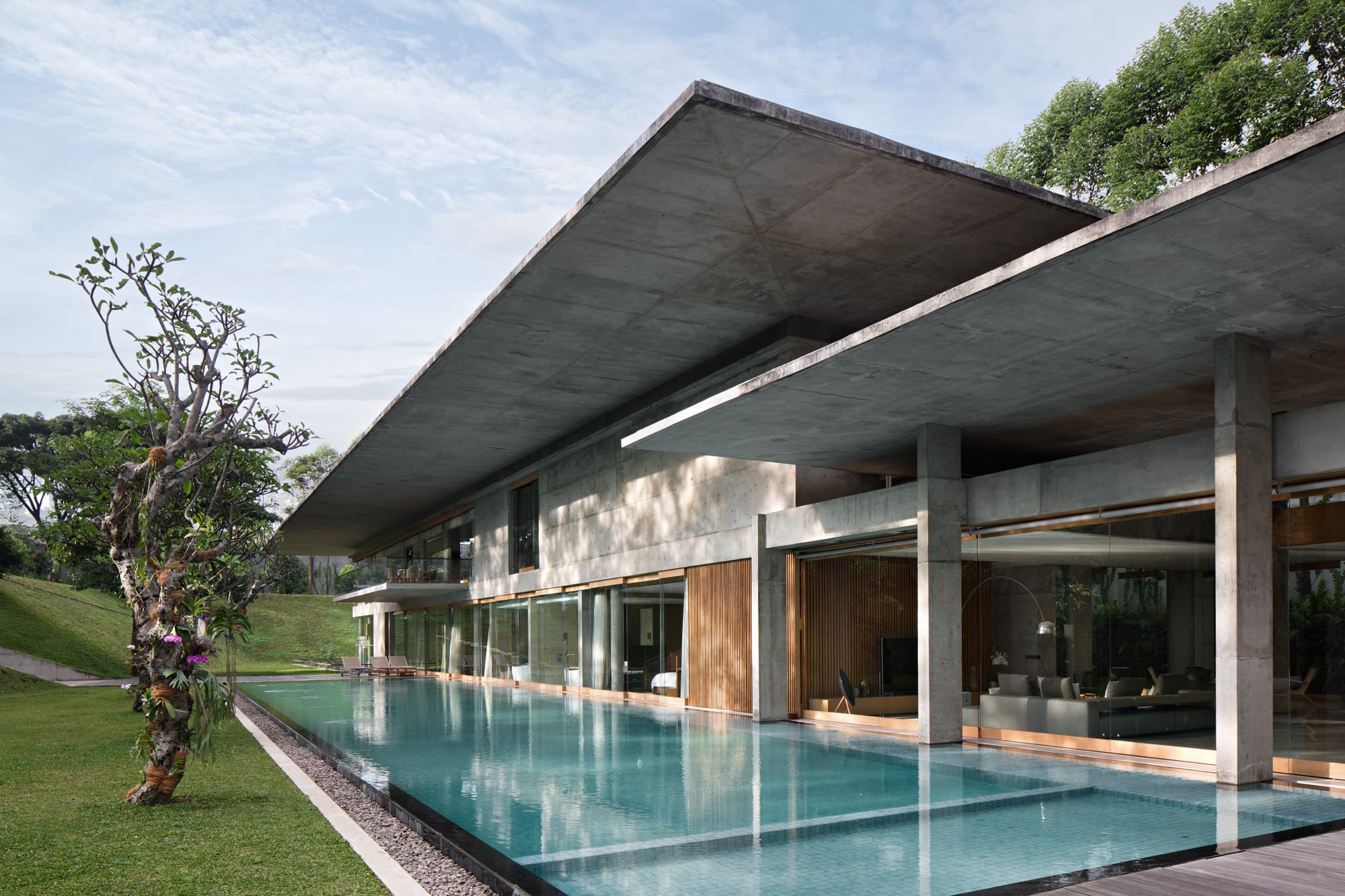 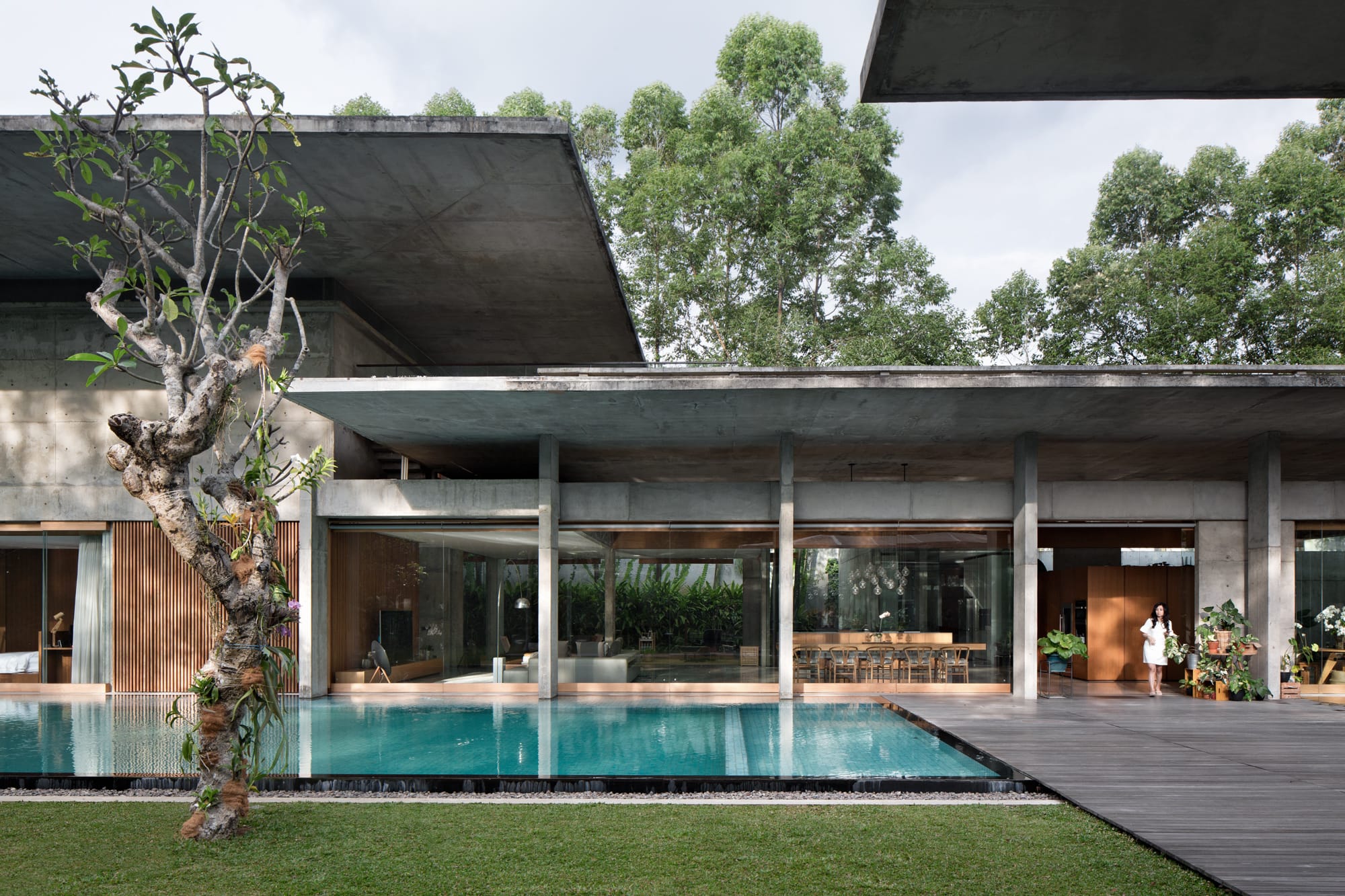 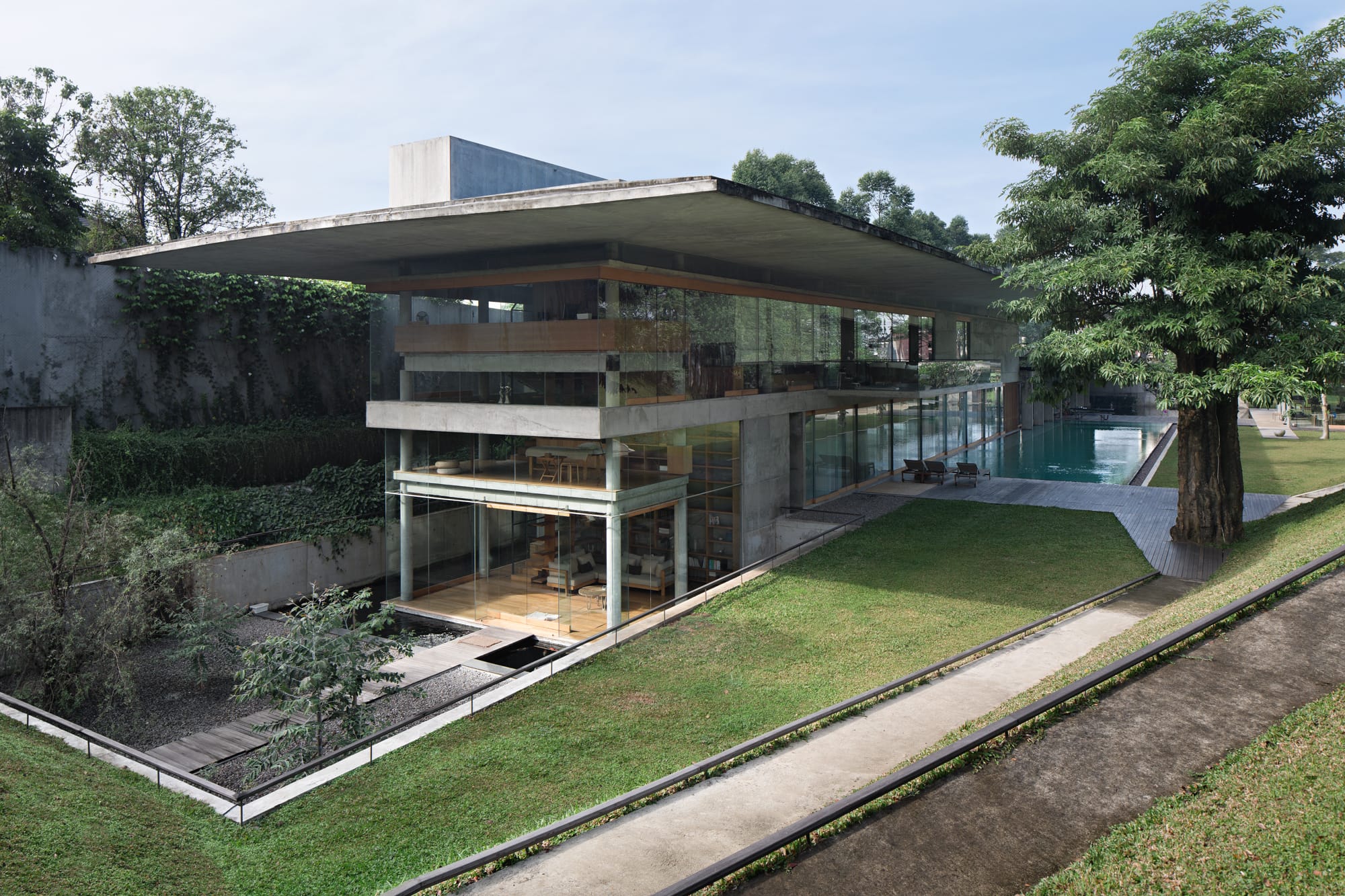 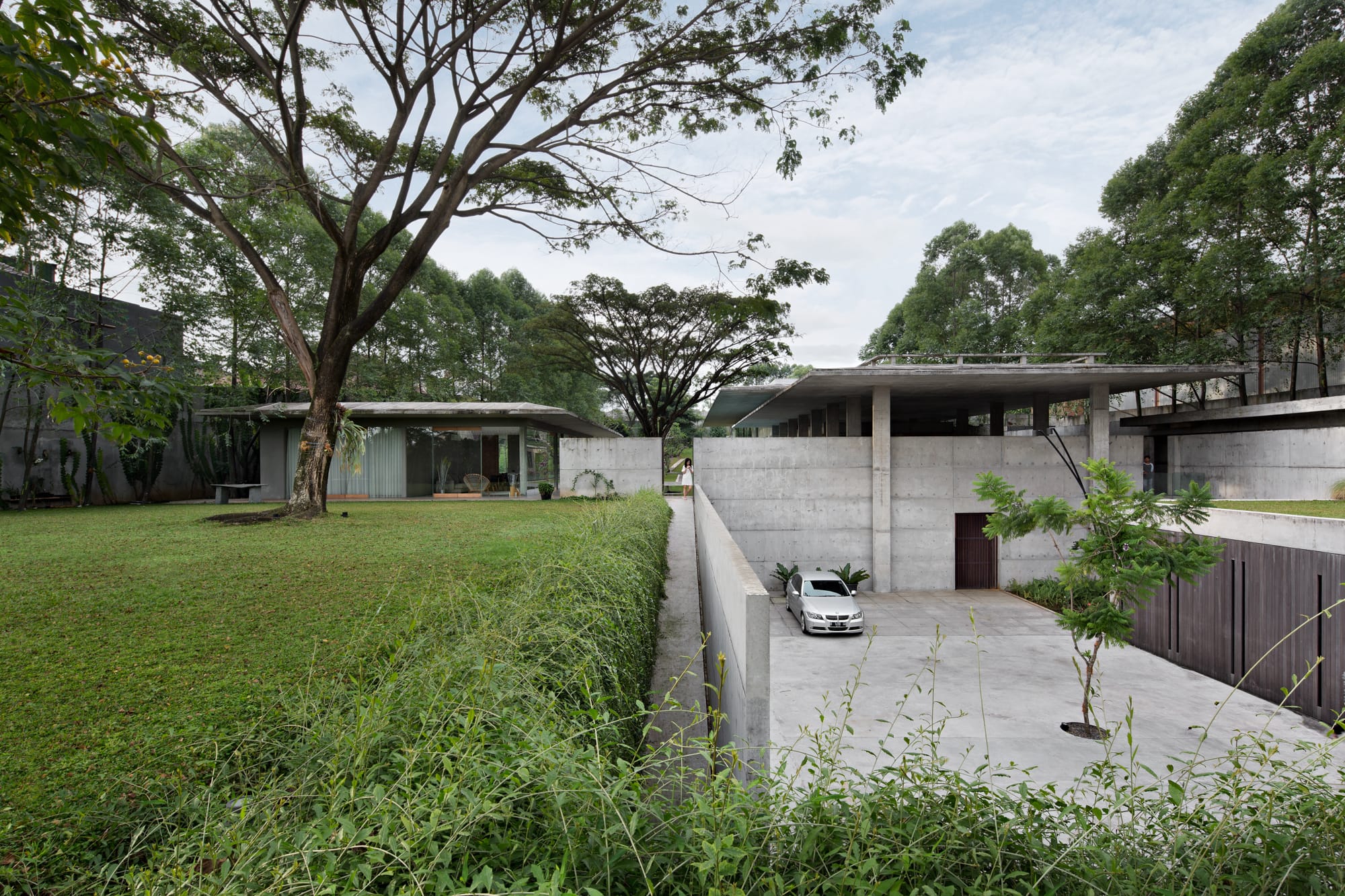 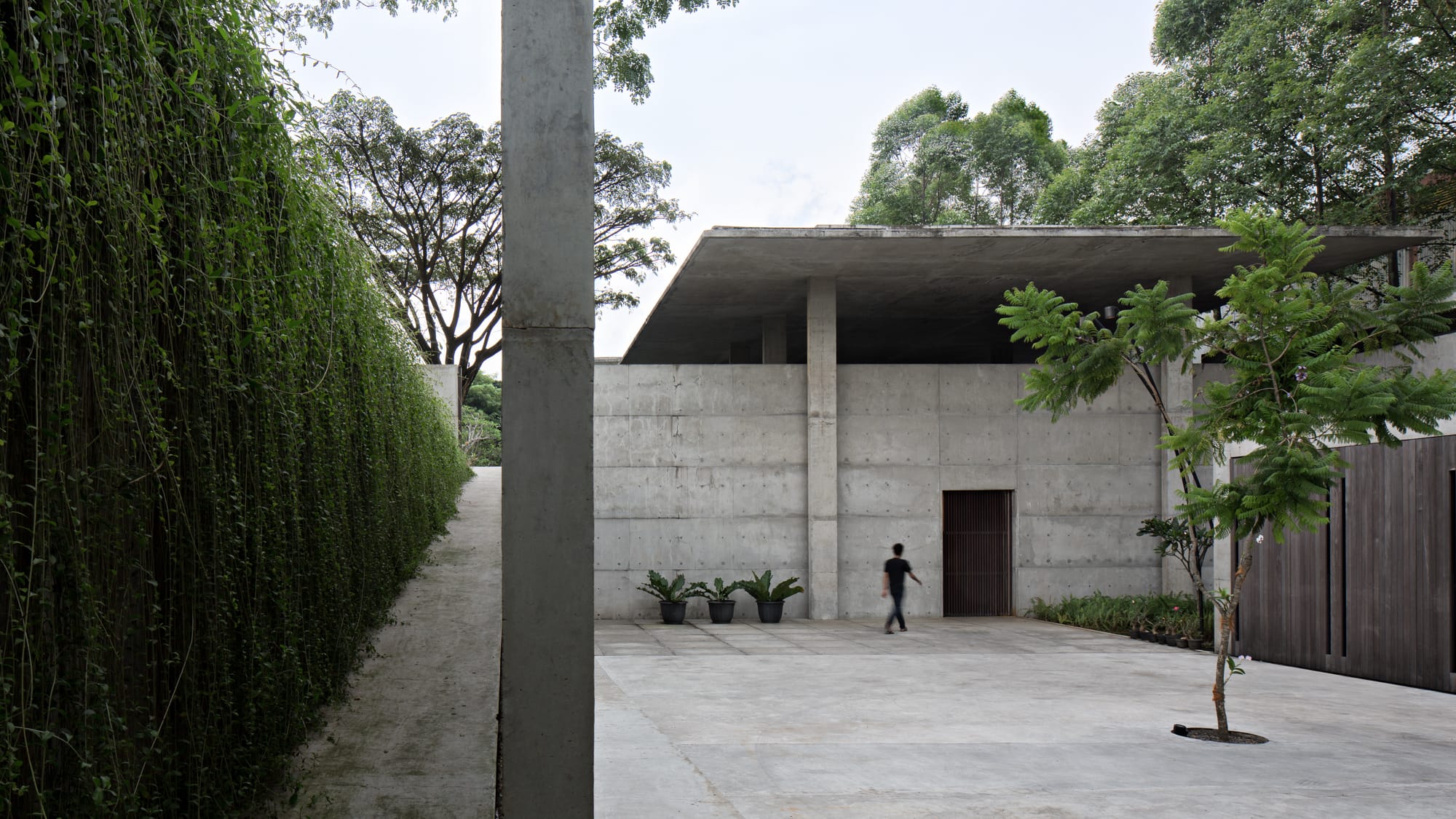 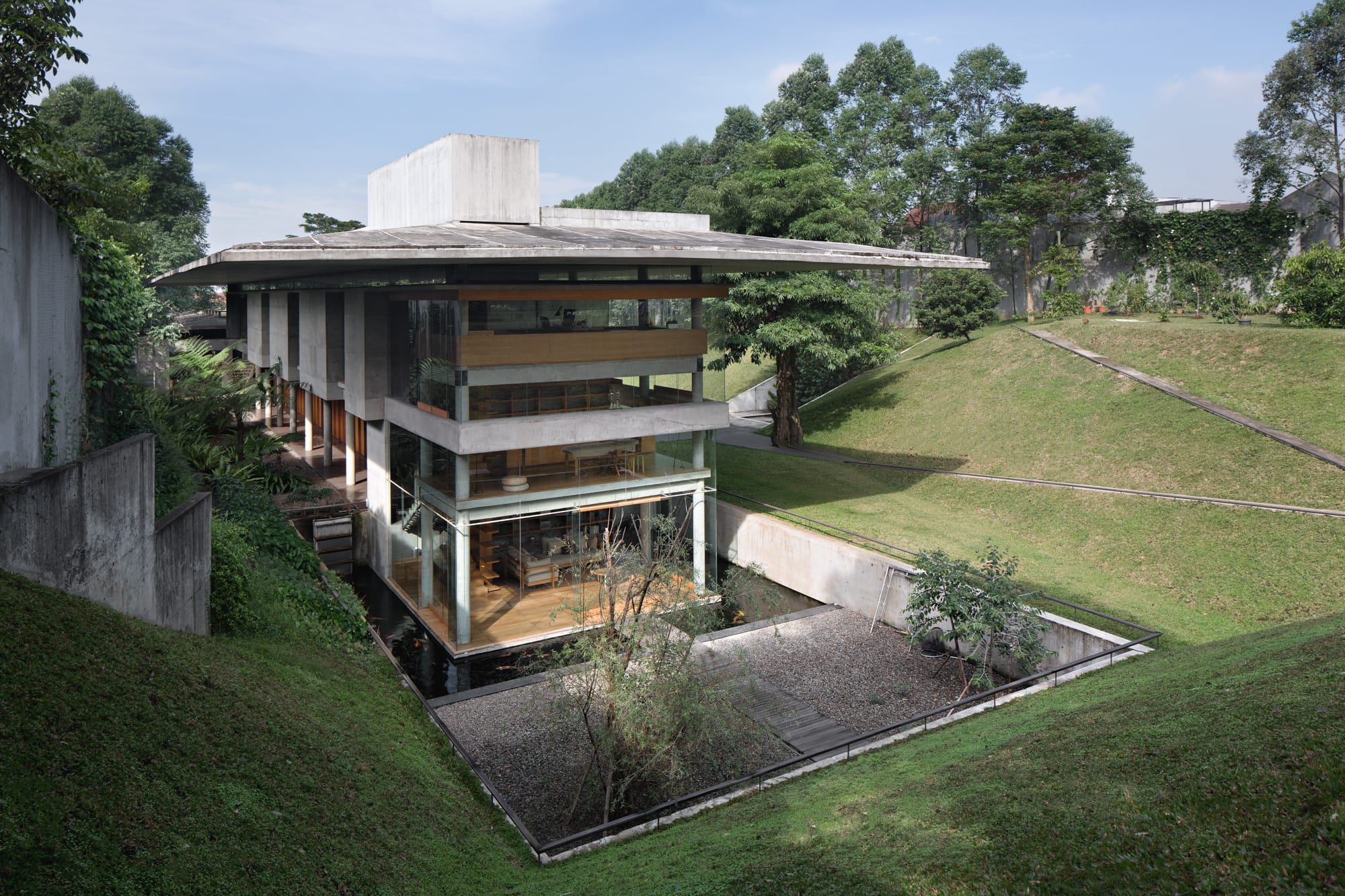 Despite the rigidity and harshness of the dominating building material – concrete, the home still manages to feel integrated within the landscape. A slab, seemingly thin and fragile offers a counterbalance to the solidity of repetitive columns that rise out of a rippling pool of water. Light-weight glass cladding brings transparency to the project, allowing greater connection between the outer environment and the interior. The distinction between the two is further blurred by a lack of air-conditioning in shared living spaces. Instead, opportunities for natural ventilation are utilised to maintain comfort. The resistance to create an artificial environment separate from the landscape is what makes this project so special, as it becomes a lens through which to experience the natural world.

The project sits on a sloping site, a feature that becomes a playful element within the home. Spaces unfold with varying ceiling heights and means of circulation. In moments, timber-lined staircases usher occupants upward, while in others gradual ramps lead to a neighbouring room. The building offers spaces with different degrees of openness; a completely open area, one that is enclosed by a roof but not walls; and enclosed rooms with boundaries defined with transparent glass. The result is a collection of environments that allow for a range of experiences – almost as if each day, the owners discover something new about their home.