Did you know 70% of the world’s population does not have access to an electric washing machine? In order to cleanse their clothing, people hand-wash their clothes with available water. This chore takes a lot of time and is usually performed by women. In an effort to alleviate this burden, a British engineer named Navjot Sawhney has developed an efficient, hand-cranked washing machine which is easy to operate. His organization has now begun to distribute their design to refugees and internally displaced people in Iraq.

Sawhney grew up in London but his family fled unpartitioned India in 1947. His website bio cites this as an inspiration for his efforts to use his engineering degree and experience to address the challenges facing displaced peoples. Leaving his engineering job to volunteer in India, Sawhney told the that he noticed his neighbors’ struggle with hand-washing clothes. He began designing a hand-crank washing machine, which evolved from a salad-spinner to a compact, barrel drum machine. Known as Divya, it uses half the amount of water than hand-washing a load of clothes.

The Divya machines are already beginning to ease the burdens of women and families in Iraq. Conflicts in the region since 2014 created an enormous , particularly in the Kurdistan Region of Iraq. Many camps hold thousands of people—displaced from Iraq or neighboring nations—who lack access to adequate water or electricity. According to The Washing Machine Project, hand-washing consumes about half of a family’s water allowance in a settlement. Washing for a family could take 20 hours a week, precious time and resources lost to the odious chore.

Sawhney told the BBC, “Hand-washing clothes is restrictive and painful. The Divya means women, who are usually the primary washers, have more time to rest.” He traveled to Iraq with the pilot batch of washing machines, which are made in the UK. He told the BBC that one woman’s situation stood out: “She’s a Yazidi lady who has been in the camp since 2016. Three of her family are still being held captive and she says she has been waiting for one of these machines for a month.” For Sawhney and The Washing Machine Project, the dignity of clean clothes is universal. So is uplifting women and their opportunities, which in turn uplifts communities.

Navjot Sawhney created an easy-to-use hand-cranked washing machine to distribute to refugees and others around the world without access to electric machines.

Sawhney started The Washing Machine Project to bring his machines to women around the world, who typically bear the onerous chore of hand-washing laundry. 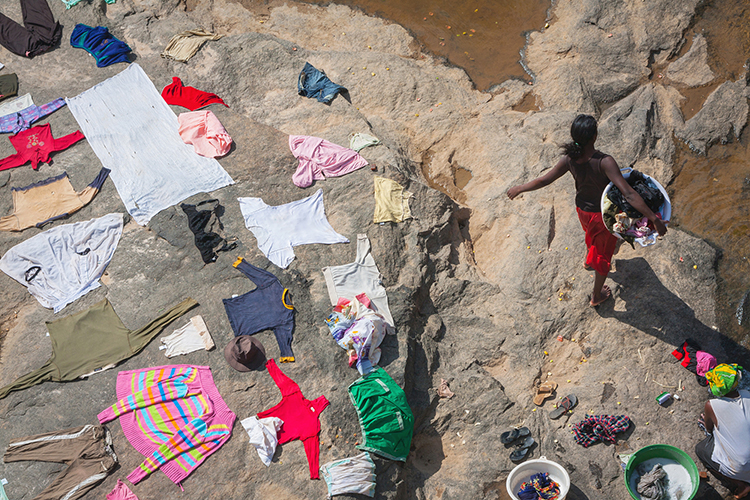 The chore of hand-washing clothes takes time away from women’s lives around the world.
Photo: SUNSINGER/

The organization hopes to free up women’s time, thereby uplifting the women and their communities.