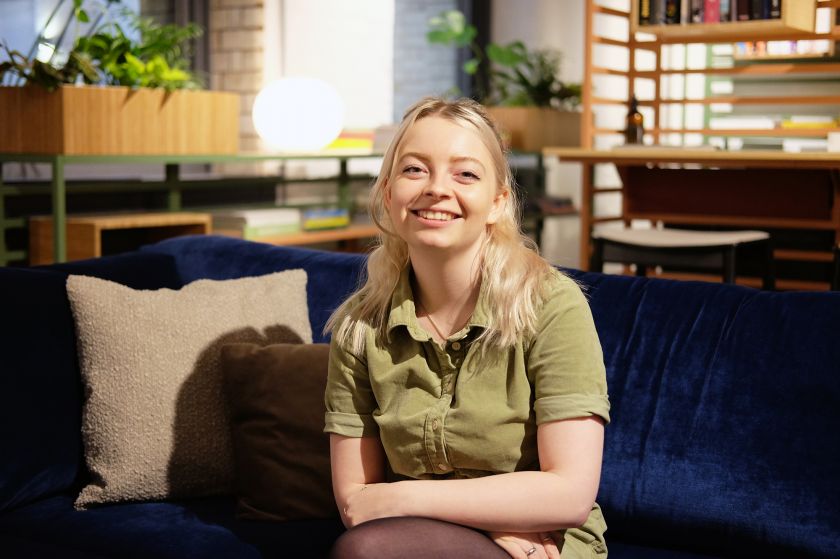 always wanted to be a photographer and dreamed of capturing the fashion weeks of London, Paris and Tokyo, but a sudden twist of fate meant she instead studied graphic design and later found herself working for an independent tile brand in an exciting role that would push her creativity to the limits.

It could be argued that the dream for most aspiring graphic designers is to move to London and work for a leading creative studio. But for Jade Watson, that didn’t have much appeal. She first studied fashion photography at Falmouth University but realised after her first year that she’d made a mistake and returned home to Preston to collect her thoughts. During that time, she realised photography was only something she enjoyed as a hobby, and later enrolled at Shillington in Manchester to study graphic design.

Back out on the jobs market, Jade was still wondering what to do next when an opportunity arose, working part-time for the independent tile brand, . Initially looking after its Instagram account and blog, five years later and she’s its creative designer and marketing manager – a big role she admits she entirely carved for herself.

We sat down with Jade at the new in Manchester, where Casa is one of 40 partners in the resources library and space for architects and designers. We chat about career paths, the unexpected creativity of working for just one brand, and why it’s healthy to change your mind.

So what happened at Falmouth?

It’s a beautiful location for a university, and the facilities there are awesome, but the inspiration just wasn’t there. I can imagine some people loved it, but I didn’t like it. I’m a city girl who grew up in Preston, and I felt a little cut-off. I could retire there. But as a student, there wasn’t much happening—hippies and surfers, which is cool but not quite ideal for fashion photography.

I did apply to London universities, and I got accepted. But when I went for my interview at Falmouth, the course leader used to work at Elle magazine, and she was one of an amazing team of lecturers, and she sold it to me by pointing out that I’d be one of 50 people on the course, not just another name or number. That got me. But when I got there, it just didn’t gel. 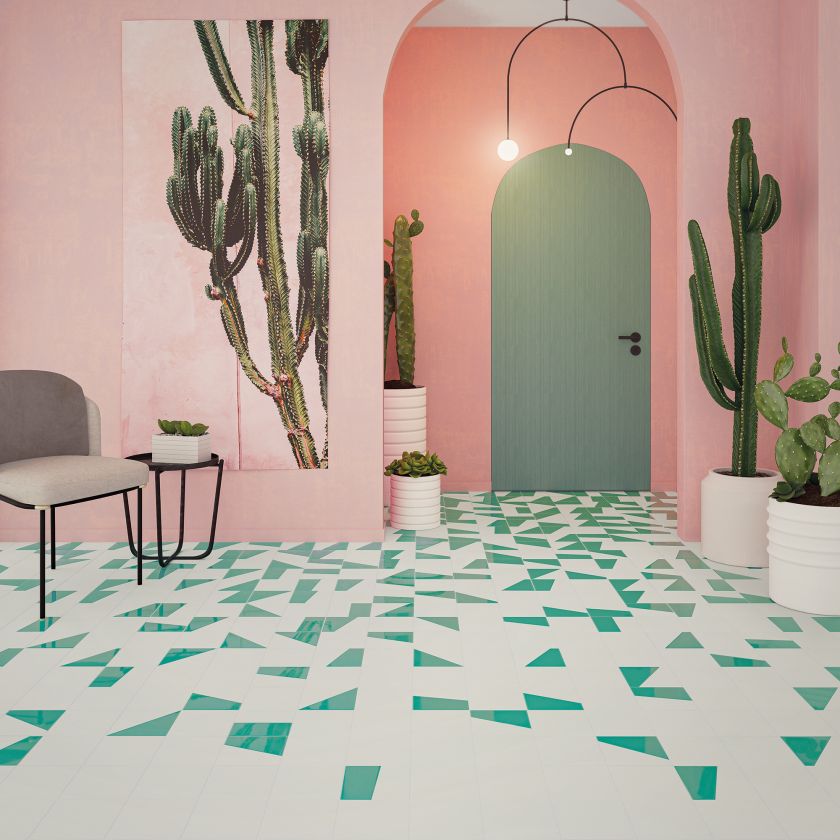 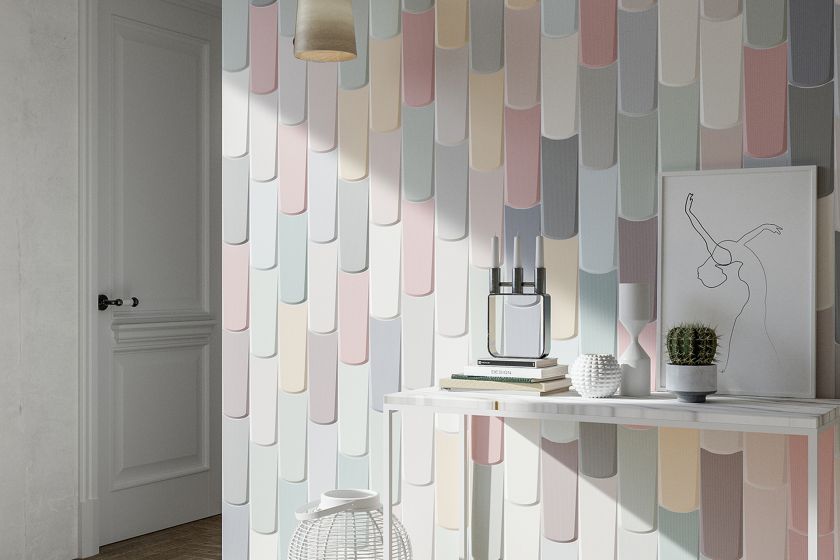 Was it also because you realised you didn’t want to do fashion photography?

Yeah, I thought it would be very hands-on, as it was during my BTech in Photography at Preston College. It was lots of theory and essays, and I was like, I just want to take photographs and edit! I didn’t want to write about the lighting I’d chosen to set up a shoot. I just wanted to be creative.

I assume you grew up loving fashion and magazines, and that’s why you chose that route into photography. But were you aware of graphic design?

Not really. It was poorly taught in school, and we didn’t cover it much at college either. And then, as I started to do more editing at uni, including layouts and design, I really enjoyed the process and discovered a passion for it. Rather than taking photographs, which I still loved but only as a hobby, I wanted to be a designer. That’s when I realised I needed to make the switch.

I went home, and my parents weren’t impressed. So I went to Manchester University and did another fashion course. But that only lasted three months, as it confirmed that it wasn’t right for me. I then worked at Next in the city as a sales assistant. I got to experience some visual merchandising, which I thoroughly enjoyed as it was so creative and hands-on. I later worked at a wholesaler in Manchester, and it wasn’t a pleasant experience. A year later, I was made redundant. It was then that a family friend offered me a part-time marketing job at Casa Ceramica as something to do whilst I looked for another job.

On the side, I enrolled at Shillington to study graphic design and added that to my CV. Meanwhile, my role started to take off at Casa, so much so that when its marketing manager left, I was offered the full-time job, and here we are five years later. 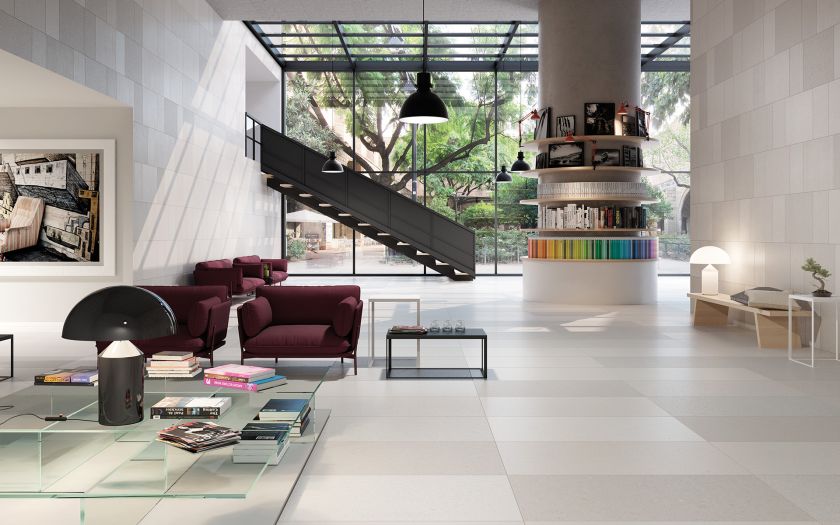 That’s great. Are you now its creative designer and marketing manager? That sounds so varied.

It is, yes. I love it. Essentially, the role has become my own. It’s really funny because Casa wasn’t sure what they wanted from me and vice versa, so I’d just come up with ideas, discuss them with everyone, and things would grow from there. It’s an independent company, so there’s quite a startup mentality here, which means we’re agile and can make changes really quickly – opposed to a much larger brand who might have to go through so many people to get things approved.

At Casa, I can literally come up with an idea and strategy, cost it up, walk across the office, present it to everyone and then get it signed off, and that’s it. It’s so good I can do that. And Casa love it, too, as they used to work with agencies, which would often involve a slow approval process.

I’m also doing many interesting things, from interior design and exhibition design to events, social media, campaigns, and the website. We’re hosting a yoga morning at Casa’s head office in Manchester now things are returning to normal. I love every minute of it.

Be open to opportunities, even if they don’t seem ideal at first. Dream jobs can emerge from the most unexpected places. You might even be able to carve out your role.

Why do you think so many designers lean more to working for a studio rather than in-house?

I think people have this presumption they’ll get bored really quick or perhaps become pigeon-holed. But I think I’ve been quite fortunate that I’ve been able to tailor my creative role at Casa. I also believe it’s a personal thing because, for me, working in an agency would stress me out. It would be spinning too many plates. The great thing about working in-house is you get to build a great relationship with that company, so you get under its skin. You know what works and what doesn’t.

I certainly never thought I’d end up in the interiors and architecture sector, but I actually really love it. There’s always something fresh and interesting going on. Even though I work for a tiles brand, it’s so creative.

Every time I tell people where I work, their perception is boring high street DIY stores, but I say, no, think of it more as “fashion for tiles”. Casa feels like my baby now. It’s creative. It’s inspiring, and I get to work with so many interesting people and products. Take the collection by the artist Nathalie Du Pasquier, for example. Our creative community will know immediately who that is, so we had to put it on display here at Material Source. There’s a story behind it, too. That’s what I love. People don’t realise there’s always a story behind the materials we choose. 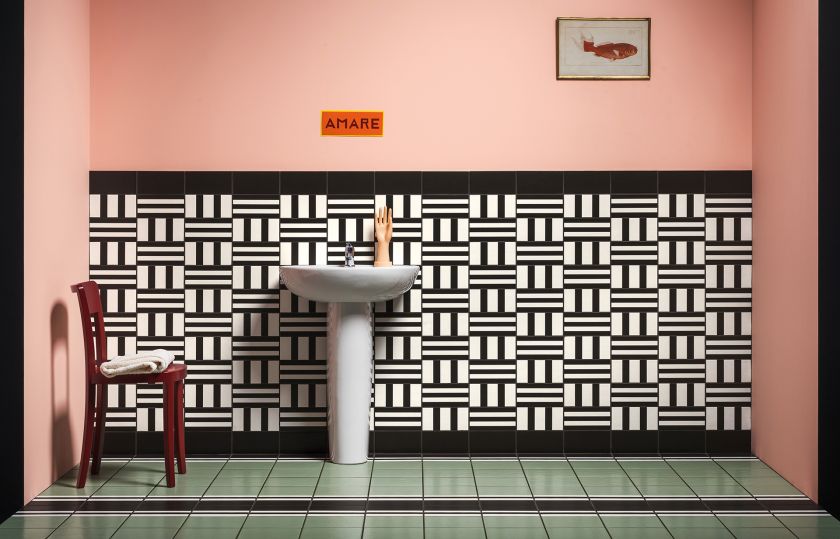 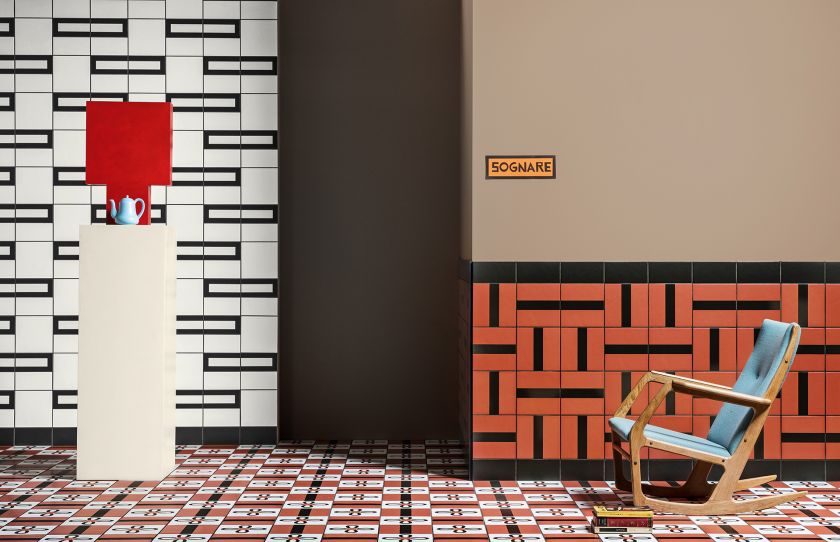 And what about London? Did you never fancy it?

It scares me if I’m honest. It never appealed to me. I love to visit, don’t get me wrong. But that’s enough for me to get my London fix. I come home, and I’m exhausted. I prefer Manchester. It’s small, manageable and walkable; there are plenty of things happening. We know everyone. I love wandering into the Northern Quarter on lunch breaks and getting inspiration from the local creative scene and retail spaces. has just opened a store in town. And we’ve now got this new space, Material Source, where Casa is a partner. I really don’t need to be in London.

You mention Material Source. It’s an incredible resource for architects and designers.

It opened at just the right time because Manchester is growing so fast, and there is such a huge community of creatives here, working in the field. Plus, loads of architects were made redundant during the pandemic that they had to set up their own practices, with many choosing Manchester as their base. They love to come here when specifying products for their projects – it’s a space where they can discover lots of new and exciting brands and materials. And it’s great for Casa and me, as I can come here, meet people, talk through designs. It’s a lovely community.

Manchester is such an exciting place. It’s transformed in recent years.

The shift is incredible. It’s bustling here. The cranes are constantly over Manchester. You’ve got opening soon across the way. There’s and St John’s development. So much is planned for the city. I feel we’re only seeing the beginning of it. 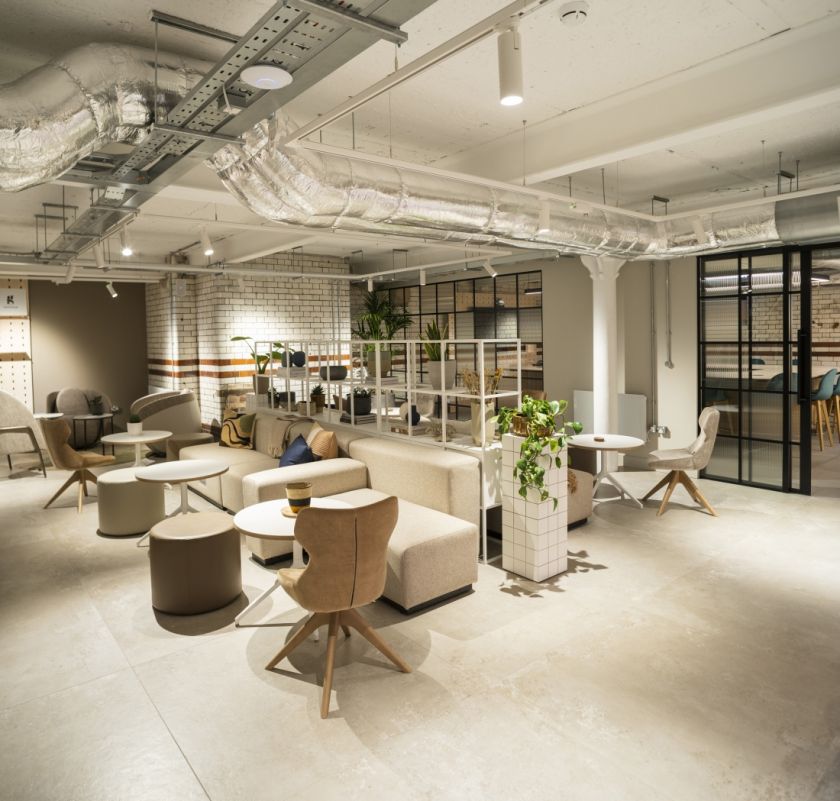 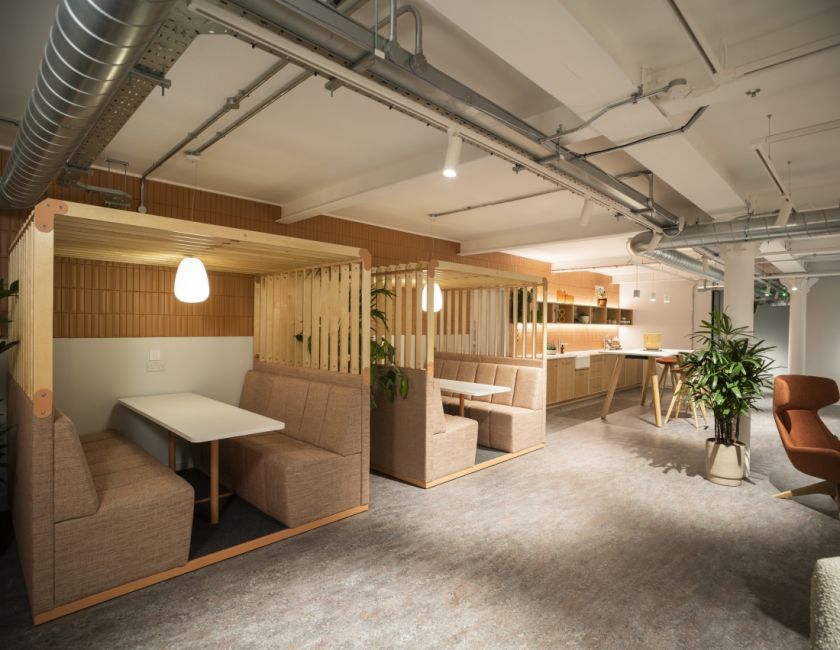 What advice would you give to people hoping to do something similar?

Be open to opportunities, even if they don’t seem ideal at first. Dream jobs can emerge from the most unexpected places. You might even be able to carve out your role, given the right company. It’s a case of speaking up and sharing ideas, showing your employer that you’re passionate and keen to learn and grow. You’ll not only impress, but you could find you get that promotion and end up doing something entirely different to what you imagined.

Also, don’t be afraid of change. Because if something’s not working, why waste any more time going down that path? I’ve always had the belief that you can just try things out see what sticks. And if it doesn’t work out? Well, you can just move on. I appreciate that I’m lucky and have a safety net to fall back on, but I still had to find something I’m passionate about. I might not be working in photography for fashion brands, but it all worked out beautifully in the end.