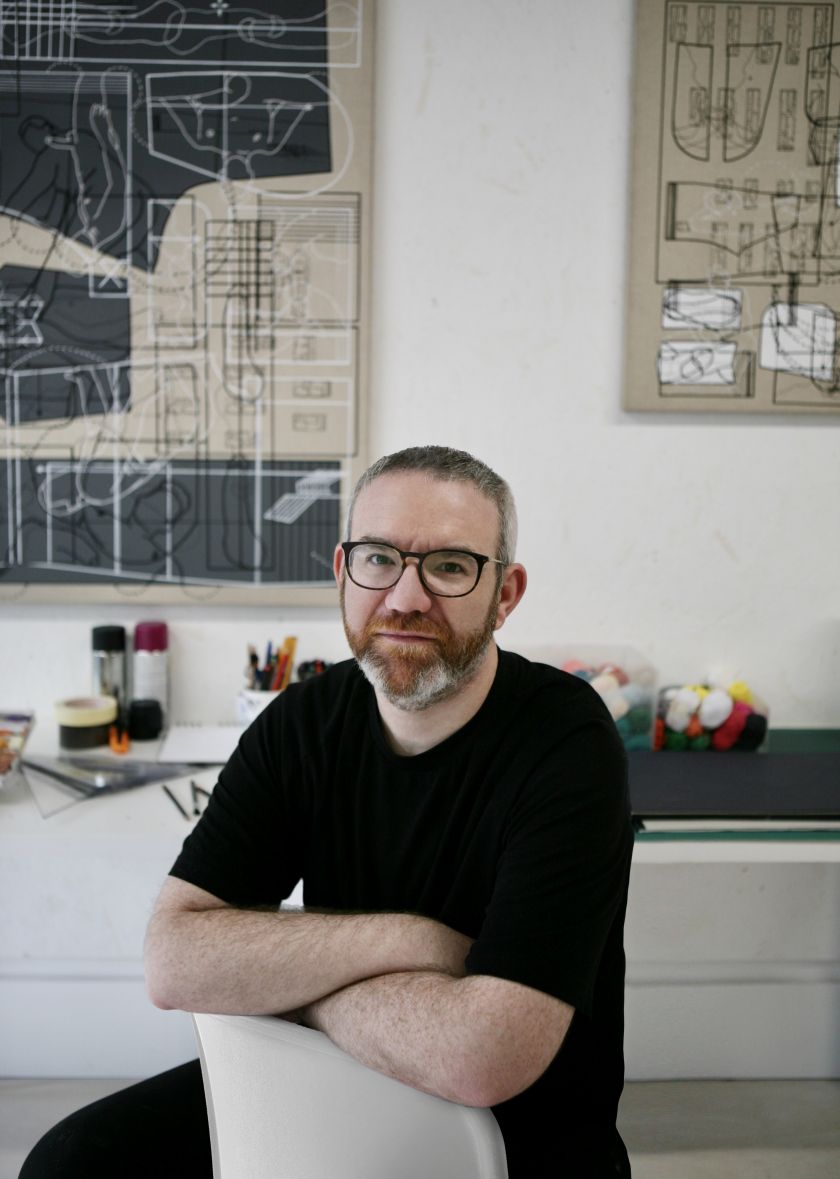 Traditionally drawing prizes might not seem like the realm where gay porn-inspired work can shine through, but thankfully, that’s not the case when it comes to the work of .

His drawing series entitled There is Never More Than a Fag Paper Between Them received a special commendation in the Trinity Buoy Wharf Drawing Prize, which is apparently “known as the UK’s most important prize for drawing”.

Morrison, who was born in Scotland but has been based in London for the past couple of decades, has said he hopes the prize will “be seen as celebrating the move towards equality for the LGBTQ+ community, but also serve as a reminder of where we have come from.”

Before entering the prize, he’d only recently returned to art after a long hiatus during which time he worked in a central London commercial art gallery for three years following his graduation in 2002, before moving into the public sector working for the Museums, Libraries and Archives Council, Arts Council England and the UK Government Art Collection (where he is currently employed part-time). In January 2019, he decided to return to the studio – and we’re glad he did.

We had a chat with James about his long hiatus, coming out and more.

Can you tell me a little more about the title of the series?

It’s something I overheard on a bus; I was taking the bus to work at the same time as the kids going to high school. It seemed like a guy talking about a gay couple in his class, and he said, “there’s never more than a fag paper between them.” I’m not sure how he was saying it, whether they meant it in a derogatory way or whether they meant that they got on so well – like there’s nothing more between them than a cigarette paper.

It also reminded me of something that one of my tutors had said about artists that were similar in their work—”there’s no more than a fag paper between them”. And I’d completely forgotten about that. When he saw the series online, he reminded me about that. 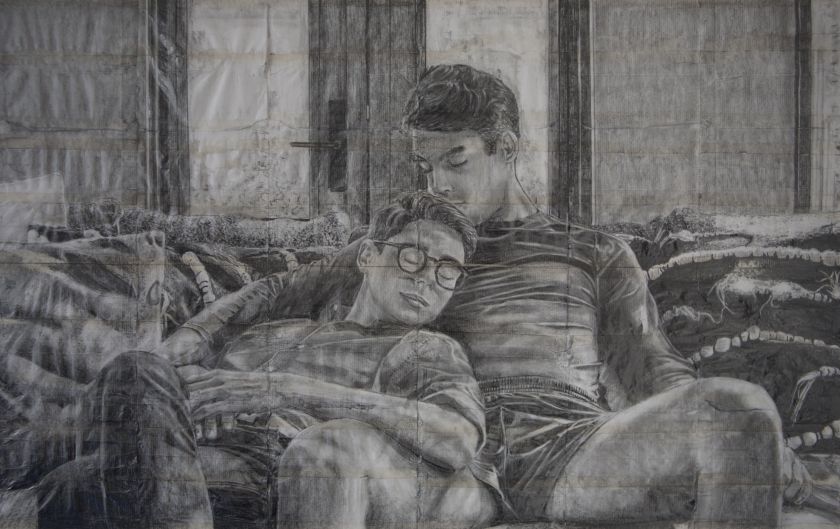 James Robert Morrison, There is Never More Than a Fag Paper Between Them – Jack & Edward

I’ve never heard that expression before. I guess it also hints at the idea of sort of coding in the gay community, the way people were using language or gestures before homosexuality was legal.

It’s also quite interesting because here we know fag as cigarette, but the term faggot is American so that they wouldn’t know that we use it like a cigarette. So that’s a play on words and language, I suppose. That kind of hidden code has always been within the gay scene, long before it was decriminalised. And people used to have to use coding even after it was decriminalised, and you still didn’t feel able to be your authentic self. We all have these kinds of languages and use words for things that other people outside the community wouldn’t understand. 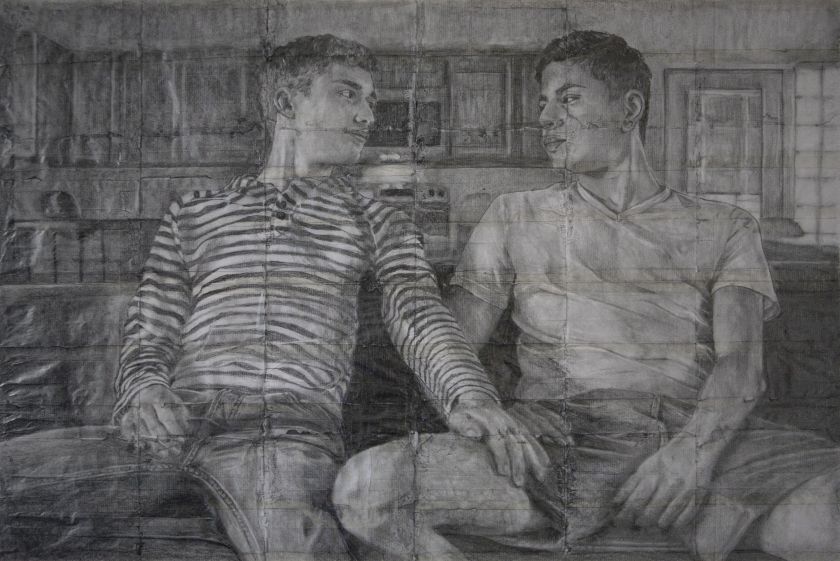 James Robert Morrison, There is Never More Than a Fag Paper Between Them – Dominic & Andy 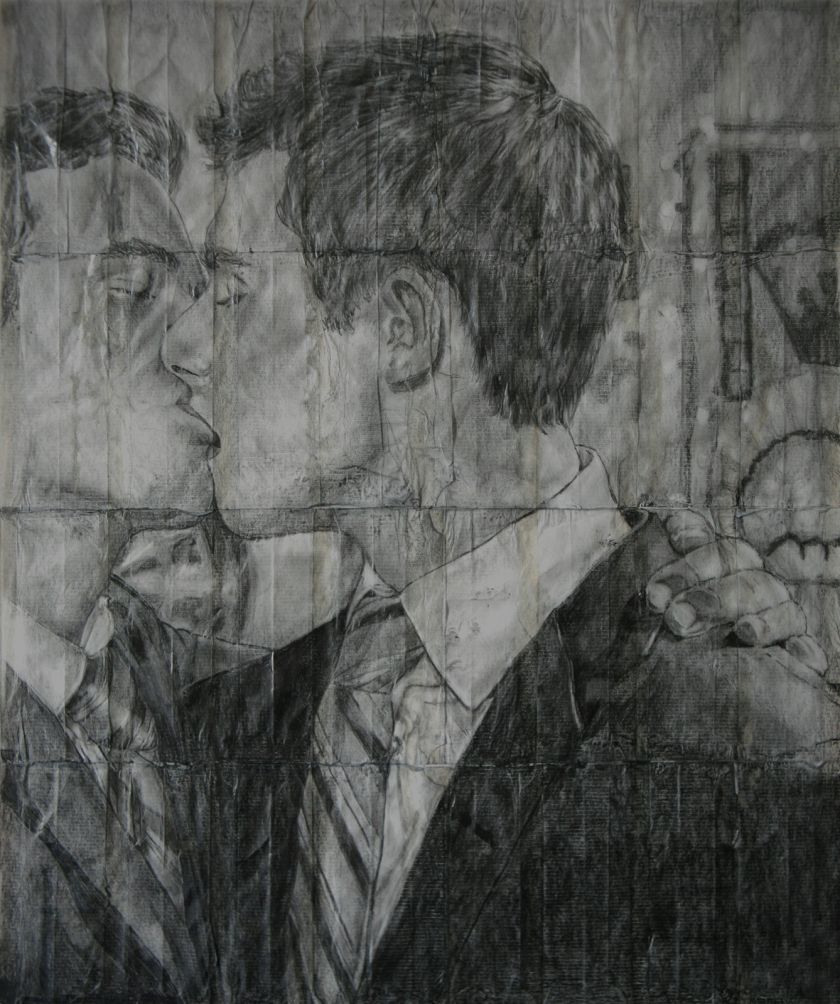 James Robert Morrison, There is Never More Than a Fag Paper Between Them – Kyle & Jake

The blurb about your work discussed there being a long span of time in which you weren’t perhaps comfortable discussing your gay identity. How far did that side of things coincide with your return to making art after 17 years?

I remember being about 11 or 12 and finding my dad’s magazines, and there’d be a page called ‘one for the ladies’ or something like that. I can remember looking through them and thinking I was more drawn to the men, thinking it must be natural that I’m interested in how a man’s body looks and how mine is changing as well. But there was a point that I realised there was a sexual attraction; you’re talking about 1991.

Things were quite different then. And I was living in a northeast Scotland small town where everybody knows your business, and people are quite openly not very nice about gay people. So I didn’t know anyone gay, and if you think about that time, there was no one really in the public eye that was out and proud. It was also around the time of the AIDS advert with the tombstone falling down. There was nothing to associate being gay with being good or something you could possibly be, so I just tried to focus on trying to be kind of nonsexual, just be straight. 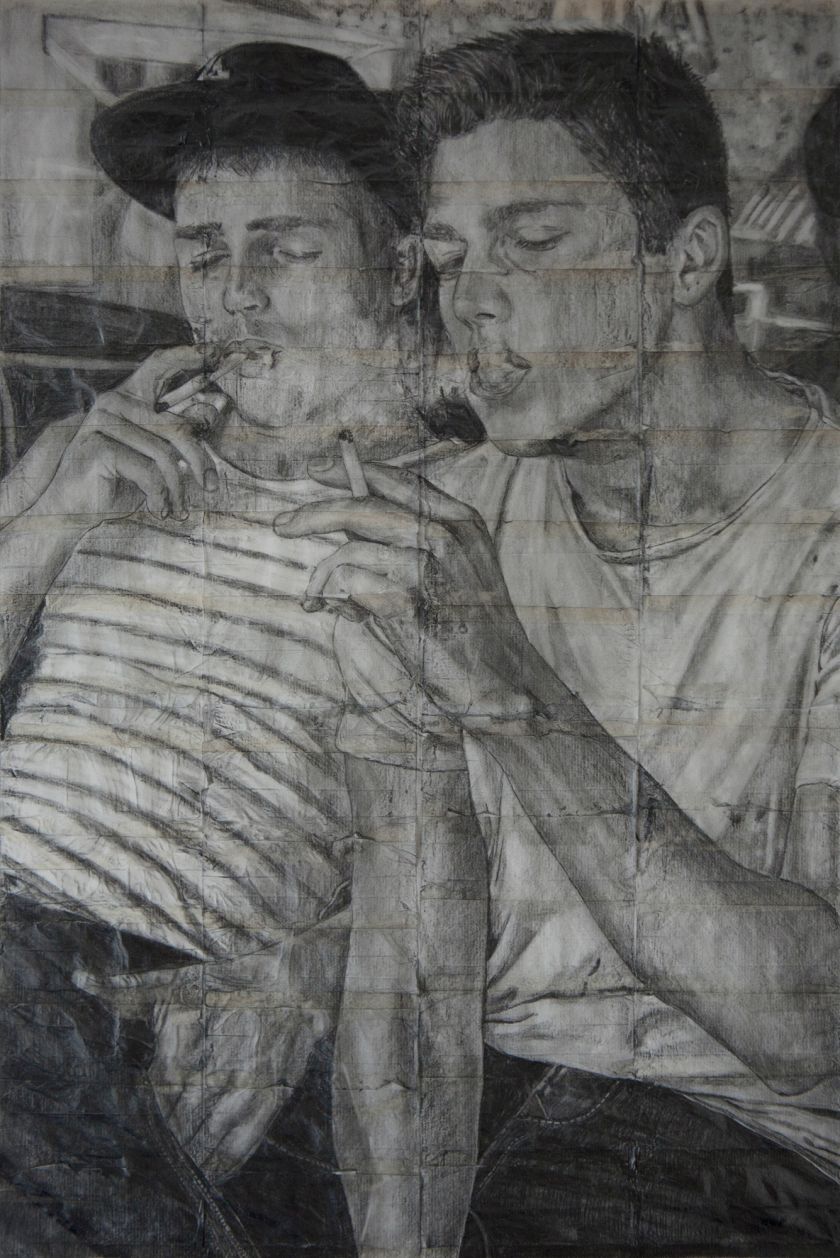 James Robert Morrison, There is Never More Than a Fag Paper Between Them – Harry & Tom 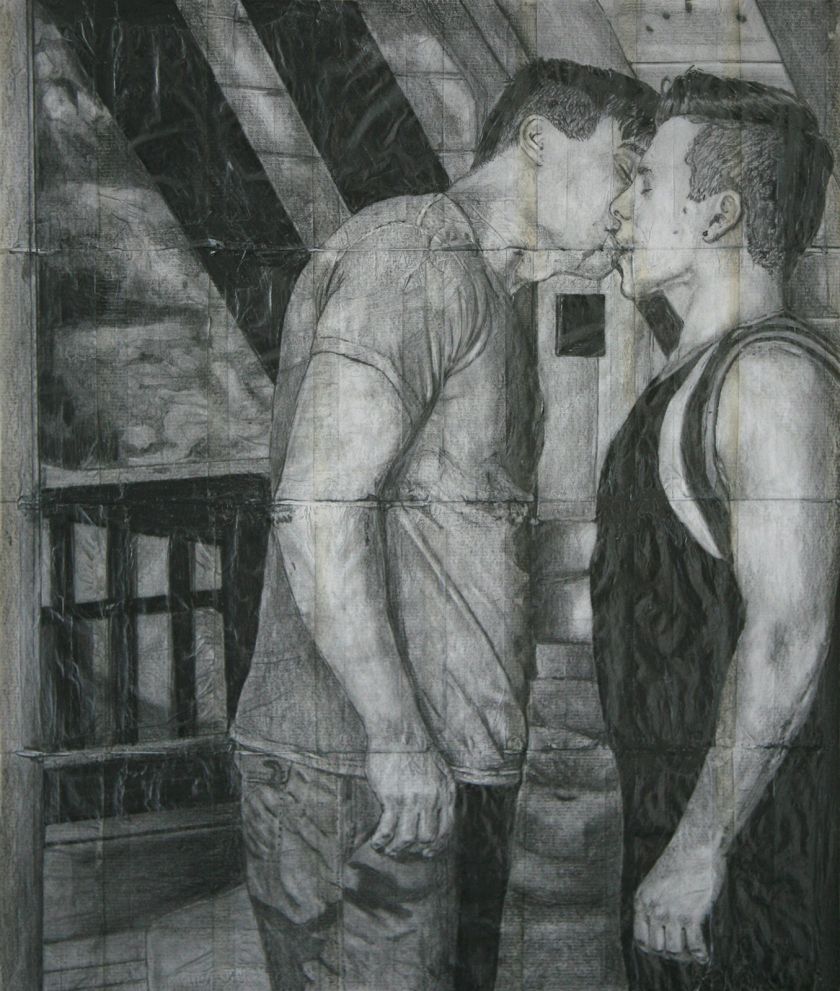 James Robert Morrison, There is Never More Than a Fag Paper Between Them – Robbie & Lucas

In 1997 I went to art school. I studied in Aberdeen first. And when you go to art school, you move away from home, it was a bigger city, and there was a gay club and stuff like that. And you know, there were gay people in art school. Then a couple of my school friends, that were close friends of mine, had moved away and came out and that kind of just gave me that confidence to explore that side of things, and that’s when I initially came out. I started to make work about my sexuality, I think in the year 2000, which would have been my fourth or final year at art school. I went straight down to do my MA at Central St Martins, and my work there was also about sexuality.

When I graduated in 2002, I had five years of student debt to pay off. I don’t come from a rich family that can support me to be an artist. So I had to get a job that pays a salary every month. I just focused on that for 17 years. Then recently, in 2019, I was in a more comfortable situation and felt quite settled and went back to the studio. That’s where all this new work started; it’s kind of a continuation of where I left off but coming at it from a different angle. I think in 2000 or 2001, I’d had so many years of not being myself, then I came out and was kind of shouting about it. But now I’ve had 17 more years to get to know that person, so this is kind of looking back at that, but maybe with a different viewpoint and something more to say. 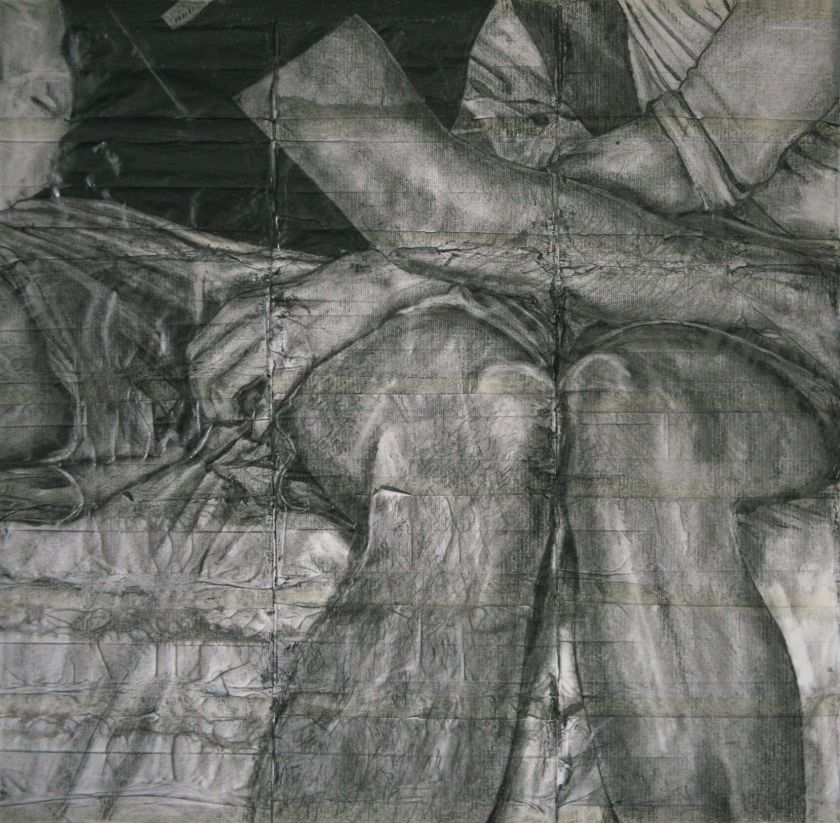 James Robert Morrison, There is Never More Than a Fag Paper Between Them – Paul & Steven #2

What do you feel that you’ve got to say about it that you perhaps didn’t, at the time?

I think just when you come out; it doesn’t mean you forget those feelings of shame or guilt overnight. Also, the world’s changed – things like same-sex marriage, the world’s much more open now. It’s kind of a celebration of where we kind of are, but it’s also a reminder of where we came from.

There must be a huge amount of skill that goes into making those drawings; not least because it can’t be easy to draw on cigarette papers.

I used to smoke tobacco; I’d buy tobacco where you get free papers, but I didn’t like the normal ones as I’d smoke liquorice rizlas, so I had loads of the plain ones sitting about. I’d save them because they might one day be useful for something. They’d just been sitting about at home, then when I went back to the studio, it just all kind of fell into place. I had no idea if it was going to work. But I just thought right, I’ll try drawing on it because it’s paper, and that makes kind of sense.

I was also thinking back to when I was in high school, before I was studying for a degree or whatever and what kind of art I used to make. I used to draw a lot from my dad’s encyclopaedias, and music magazines and stuff like that. I would take an image and try to recreate it on paper. So an element of it goes back to that place of drawing when I was in a happy place: when you weren’t doing it to pass an exam or for a project or something, you were just drawing for love of it. 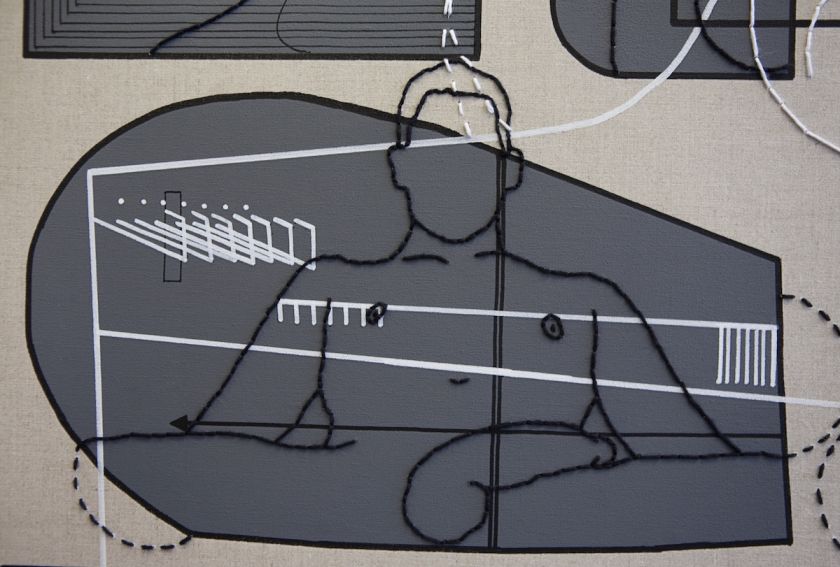 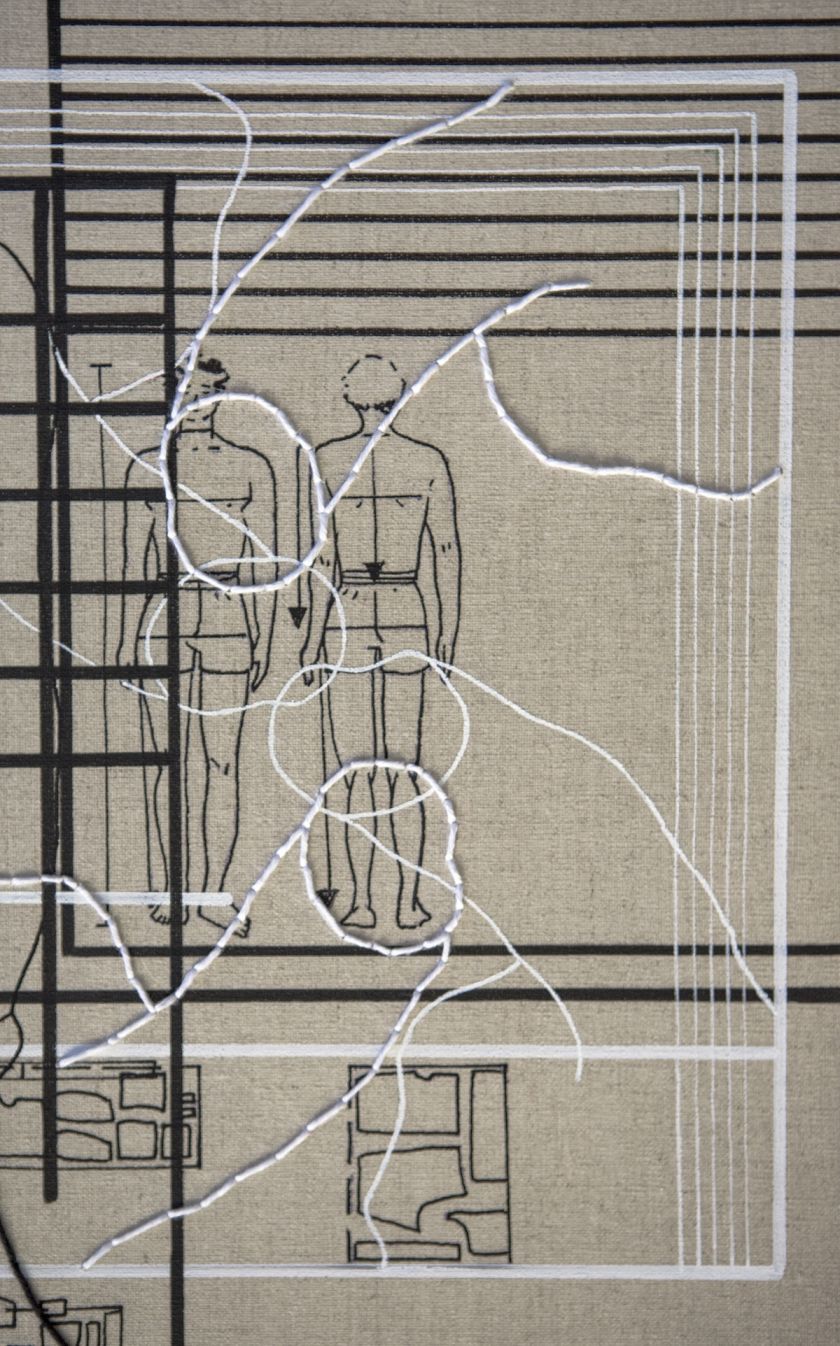 How did you create these images then?

The three that were shortlisted for Trinity Buoy were the first three that I’d done. But then, as I’ve continued, it’s changed slightly; I think those first three are maybe a bit rough. As it’s gone along, I’ve become a bit more used to the medium, and it’s softened a little bit. I think the actual drawing itself has become really beautiful.

I quite liked the fact that they ripped because it gives a fragility to the work. I think it’s a medium that just seems to work really well for what I’m trying to say, I suppose. 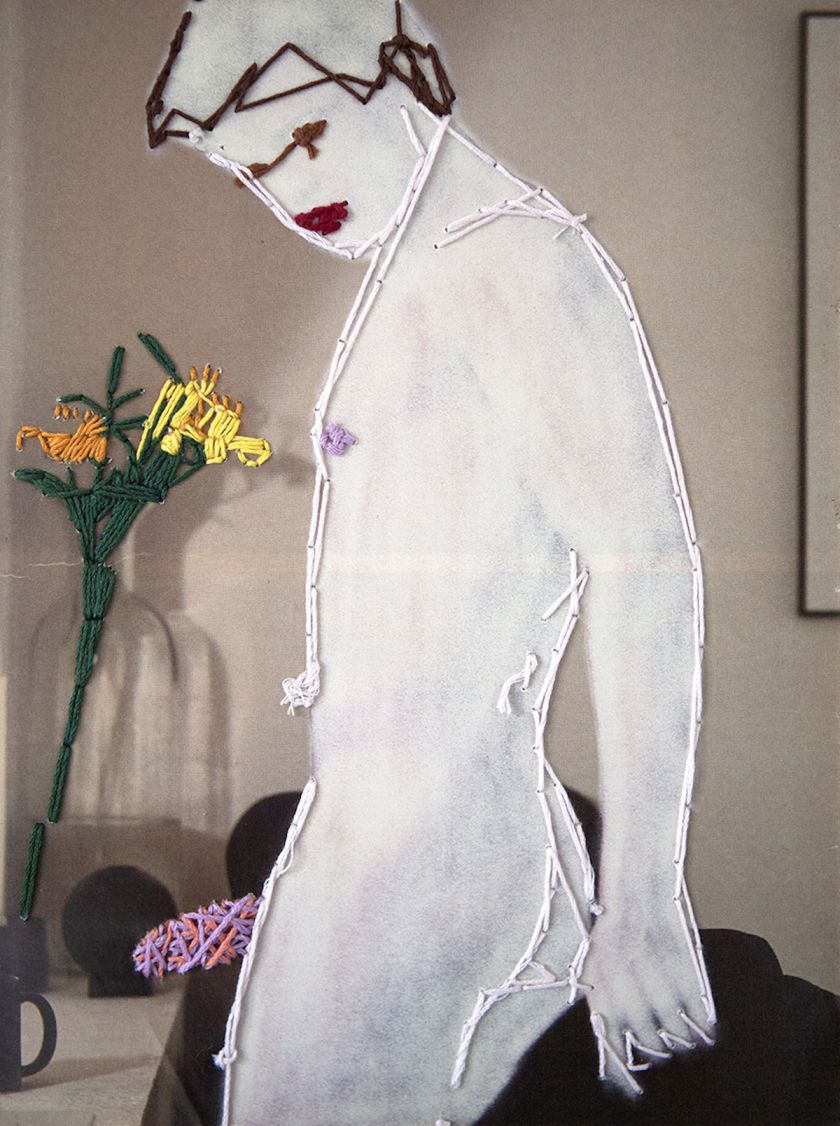 James Robert Morrison, Ghost within me # 11 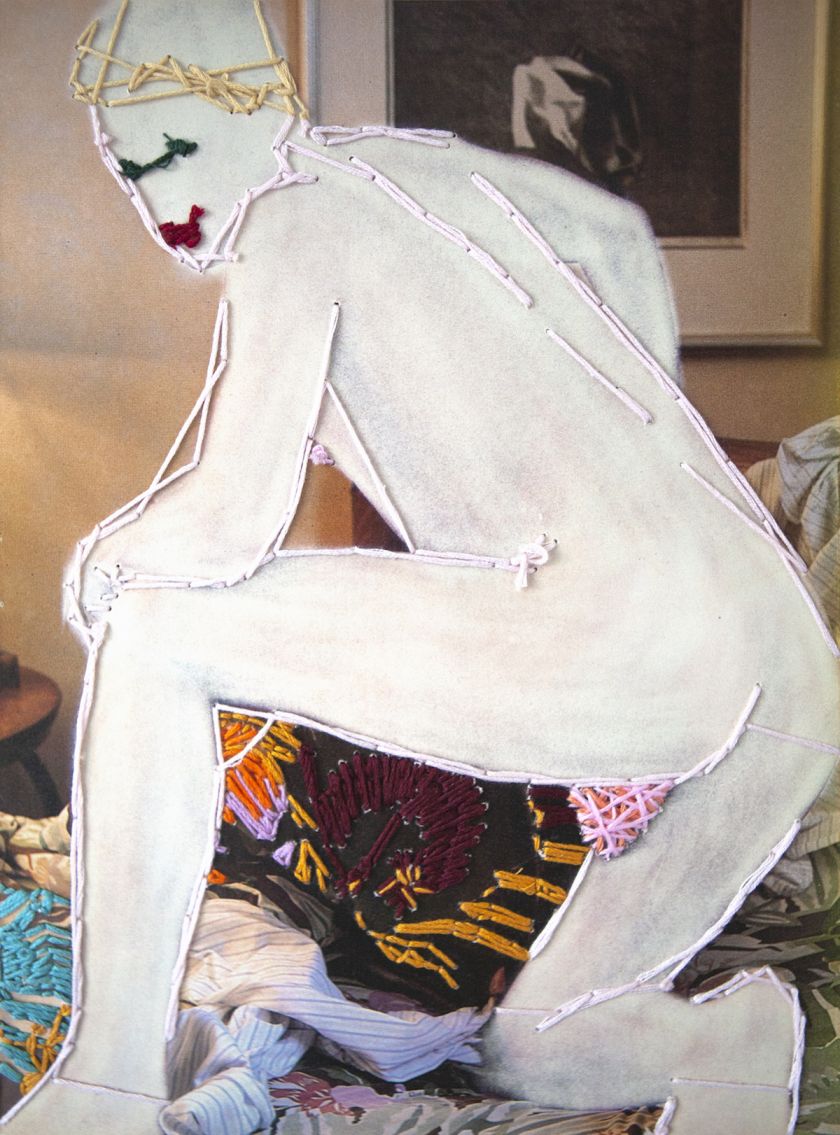 James Robert Morrison, Ghost within me # 14

I noticed you had some really, really gorgeous embroidery works from before. Has drawing always been your focus?

Not really. At Aberdeen, I studied painting, quite traditional skills. You would do a day of life drawing every week; you learn the fundamentals of drawing and painting. St Martin’s was quite different in that sense, but the combination of the two helps me with the way I work. So you know, drawing is traditional, but then the second idea is a bit more conceptual.

Can you tell me more about the Ghost works?

All my work is like an ongoing conversation about the memory and experience of discovering I was gay, and then the subsequent decision to kind of conceal it, and then the journey to self-acceptance. 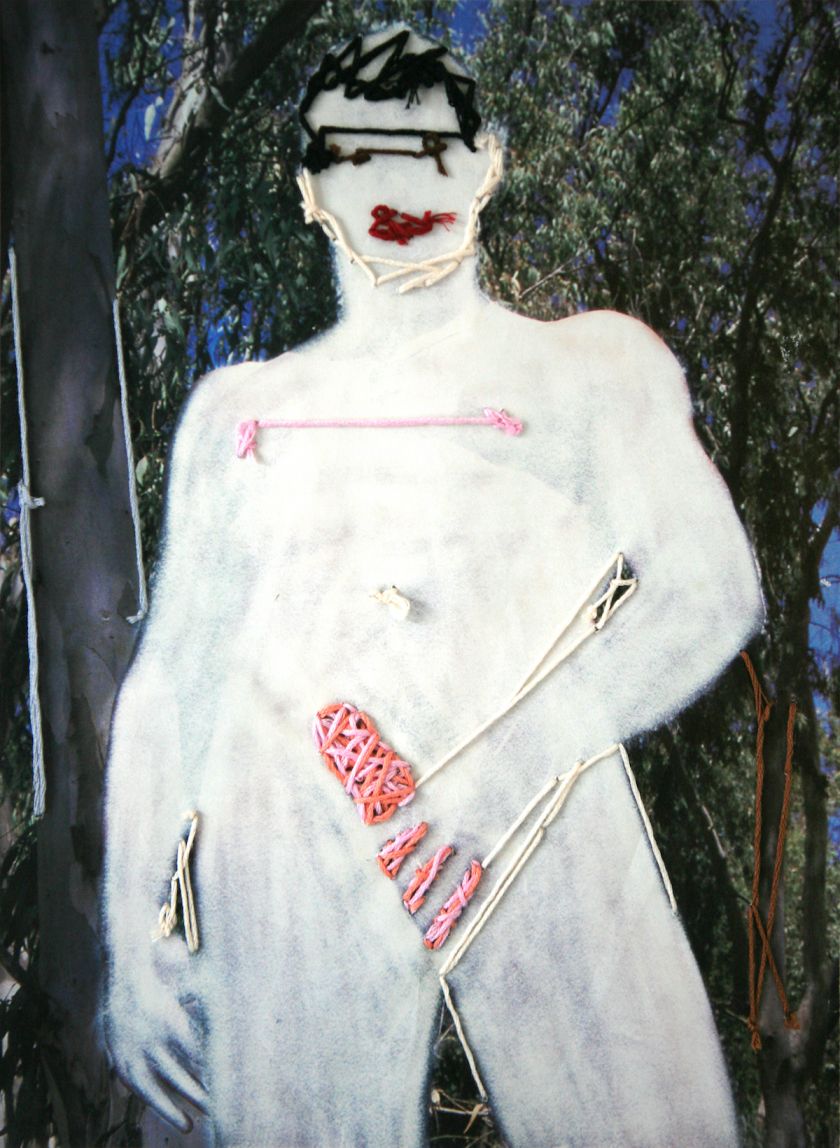 James Robert Morrison, Ghost within me # 1 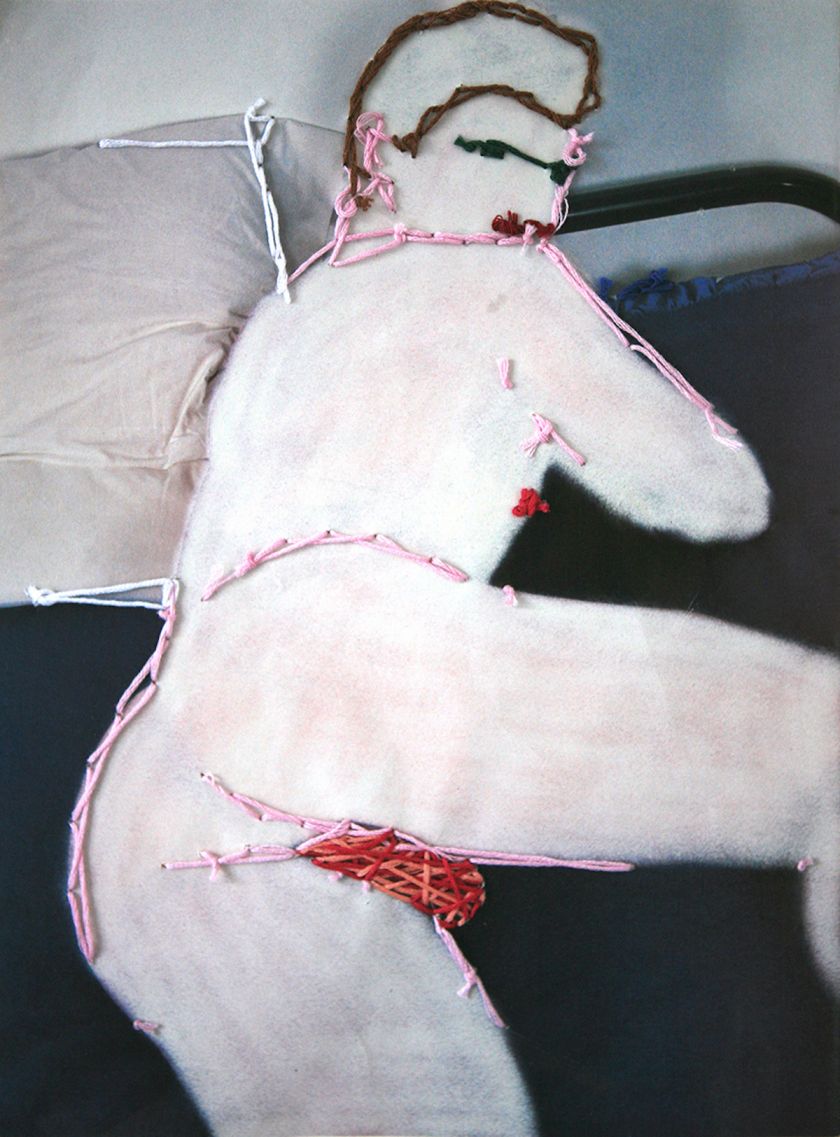 James Robert Morrison, Ghost within me # 4

I started buying them in the early 90s. What’s also quite interesting is that as I’m using them for the work, they’re diminishing and disappearing, which is quite nice. These magazines served a purpose for me when I was young, coming to terms with being gay; then having come to terms with it, I’m creating artwork from them, then they won’t exist anymore. So it’s like re-appropriating the material.

How did you feel about the reception that your drawings have had?

I’m really pleased; it couldn’t have come about at a better time. Going back to the studio after 17 years away will always feel risky. I don’t have that network of artists that I graduated with anymore. I had a couple of group exhibitions towards the end of 2019 then thought it would be a good thing to start submitting some stuff to competitions and prizes. When I put those drawings on Instagram, they were really popular.

Being shortlisted for Trinity Buoy gives you confidence in what you’re doing—that I made the right decision to go back.