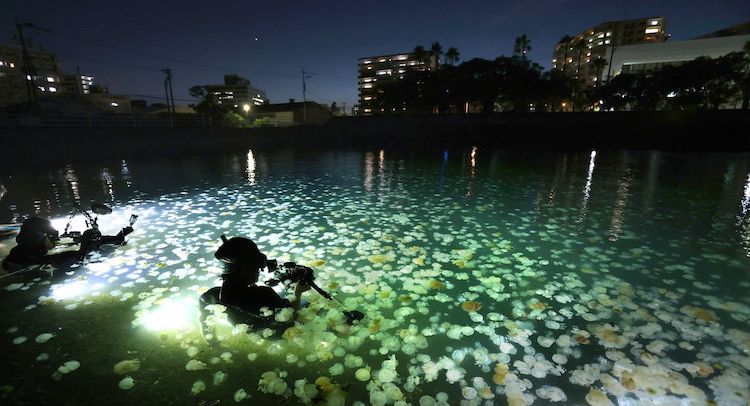 From cherry blossom festivals () to “firefly season” (), Japan is home to many breathtaking natural phenomena. And just when we thought the country couldn’t be any more magical, there’s another attraction that looks like something from another world.

Overlooking the Sakurajima volcano in a corner of Kinko Bay in Kagoshima city, the Yojirougahama waterway is a gathering place for hundreds of luminescent jellyfish. From late summer to early autumn, a large group of spotted jelly (also known as golden medusa or Mastigias papua) show up in the evening and light up the dark waters.

The jellyfish are less than 10 centimeters in diameter and have a brownish, slightly translucent umbrella. The swimming creatures open and close their umbrellas as a reaction to light and create constantly changing patterns in the water. Grouped and floating near the surface, the mesmerizing jellyfish look just like floating cherry blossom petals.

The Yojirougahama waterway is approximately 60 meters wide and 1.6 kilometers long, and it was originally built to protect the coastal area from flooding during high water. Today, it’s a jellyfish paradise and the home to countless plankton, too.

If you want to see this phenomenon for yourself, diving businesses in the region now offer special snorkeling courses in the waterway called “Kurage nights” (or “Jellyfish nights”).

In Kagoshima city in Japan, the Yojirougahama waterway is a gathering place for hundreds of luminescent jellyfish.