Jarvis Brookfield on his psychedelic paintings, dream-like states and what it means to be human 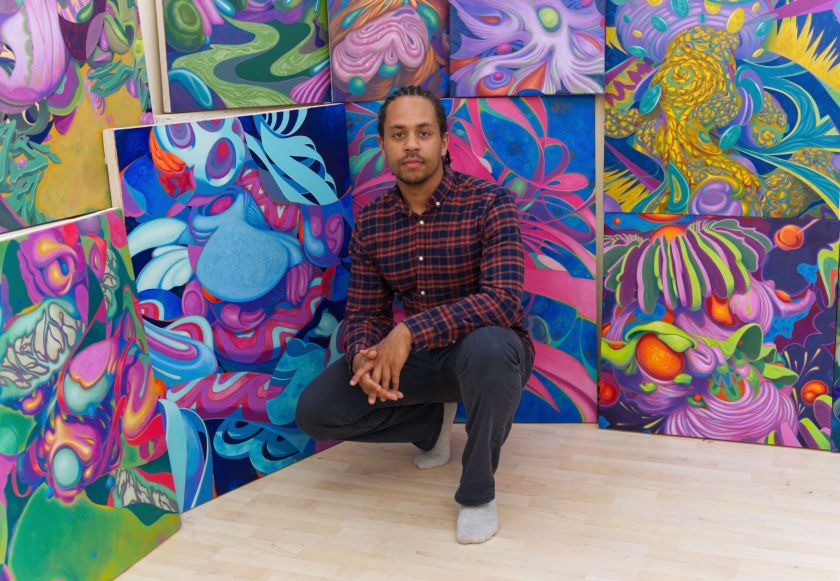 What does it mean to be human? And what are these altered states of consciousness that are so fascinating? These are the things ponders through his explosive and psychedelic, acid-trip artworks, going on show at LCB Depot in Leicester this month.

His latest series, titled Inaquien, is based on a made-up word meaning “inner acquaintance”. It’s inspired by Jarvis’s personal experiences induced by entheogens – substances known to alter our perception, mood, consciousness, cognition or behaviour, and often used in spiritual development. You know, mushrooms, cacti, plants – that sort of thing.

In this case, Jarvis experiments to ask life’s most profound questions: why are we here? Is any of this real? And why is it possible to experience different states of mind other than being awake or asleep? These are heavy questions for anyone to fathom. But it’s undoubtedly enjoyable seeing Jarvis’s attempts to make sense of it all, putting brush to canvas and letting his imagination run free. We spoke to Jarvis about his practice, spirituality and dreams, and how he hopes to inspire a sense of awe and wonder.

So, first up – I love your work. Can you describe your style?

Thank you very much! At present, I feel that it’s centred around creating imagined worlds that I hope for people to lose themselves within, even if only for a moment. They’re luminous and colourful. Fluid, psychedelic, dimensional, and communicate a sense of vitality and abundance. Some people have said of how they feel spiritual, and others have pointed out a sense of fluidity and aliveness in it, too. 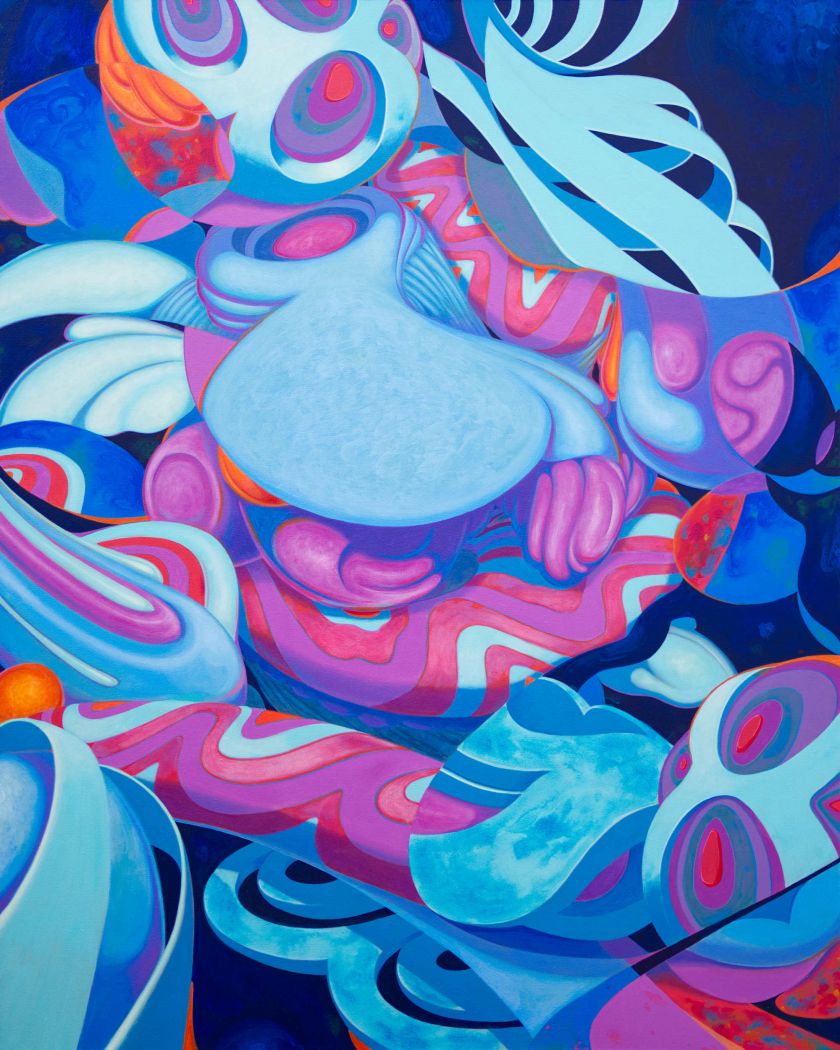 I feel like this is very much a joyful acid trip. You definitely, seem curious about altered states of being?

Haha! Yes, I am. Every morning from an early age, whenever she got the chance, my mum would share her detailed and curious dreams with us. I always enjoyed them more than any story in a book and cherished listening to them. I still get to hear a few from her here and there when we chat on the phone or when I get to see her.

But I think that listening to and enjoying them so much early on impressed me with curiosity for the inner worlds. I’ve always had a vivid dream life, too, and experienced a lot of sleep paralysis growing up, followed by several lucid dreams. But my first encounter with a psychedelic experience in Amsterdam baffled me. I remember switching off the lights of my hotel room, closing my eyes and watching a vast, bright, glistening, and golden light in what felt like a Ferris wheel turn and tumble in front of me. Since then, I have had several experiences which have shown me that there is far more to life than I could have ever imagined. 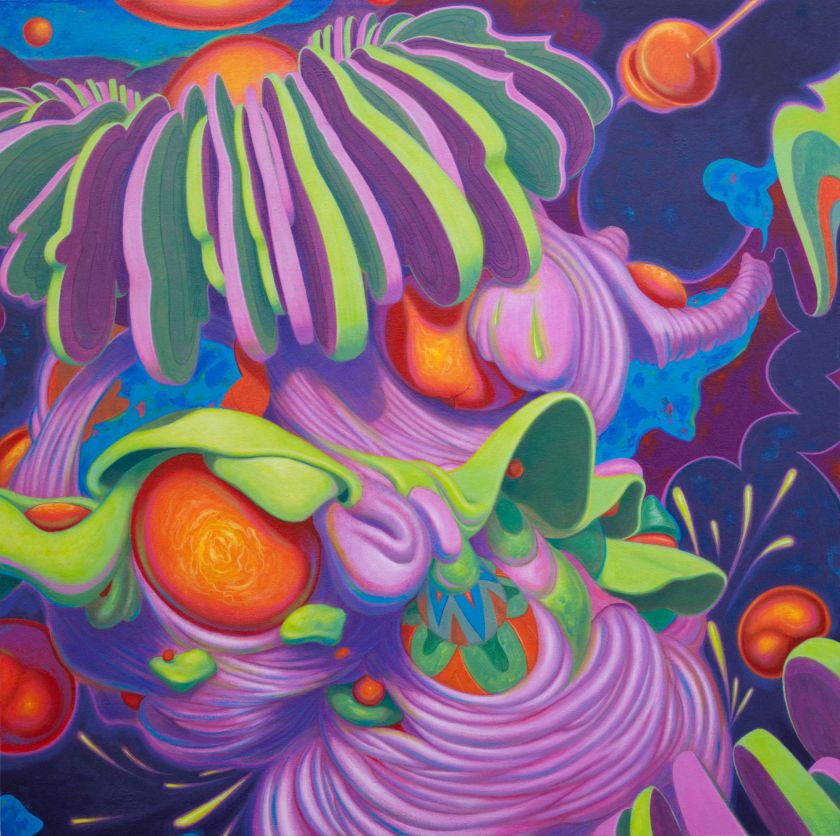 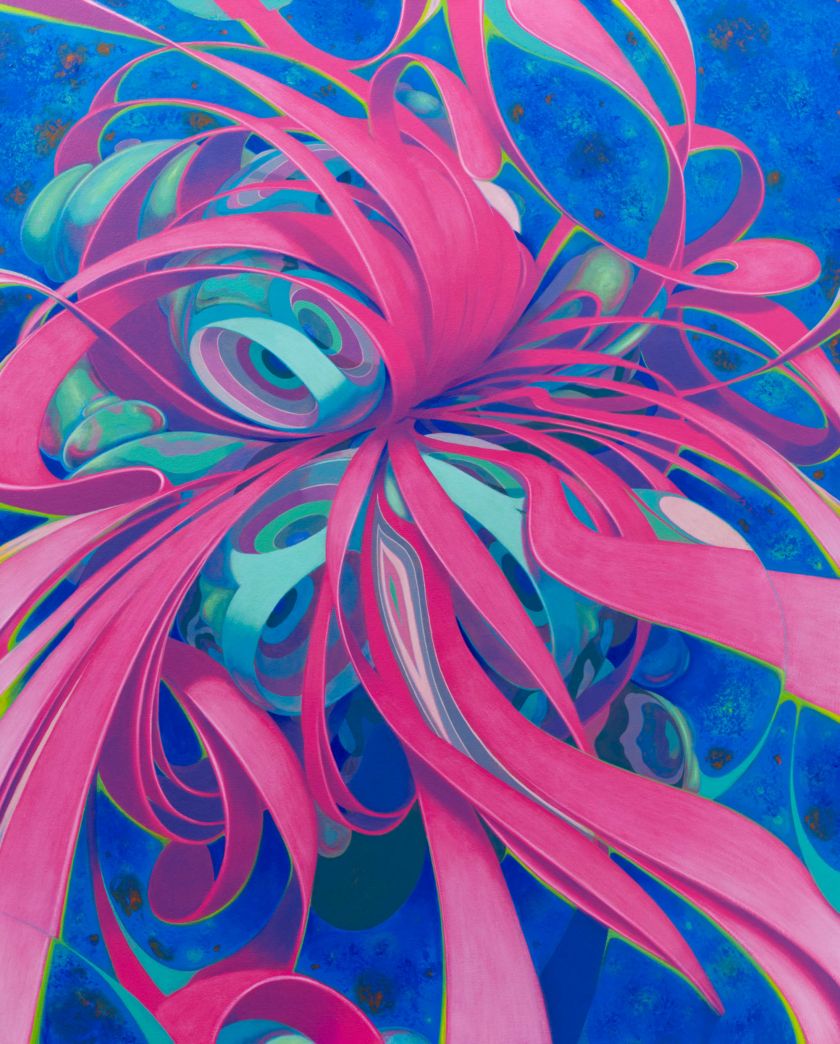 What are these personal experiences you talk about?

I’m talking about my psychedelic experiences. The images and places that my mind has been taken to and shown is utterly confounding but not an uncommon remark to the millions of other people who have ventured into the inner worlds. But alongside the visions. Voices during those experiences have whispered to me and offered suggestions, that after taking on board and integrating, changed my life for the better.

Do you dream at all about painting? Is that where some of your inspiration comes from?

Yes, I dream about painting sometimes. Sometimes I’m working on one, and in others, I have been in the painting, surrounded by it. I’ve also seen some glorious paintings that have since dwindled in my memory that I wish I could paint! And I can’t say for certain that it does or doesn’t come from my dreams, but if it does, then it comes indirectly as I’ve never been compelled after a dream to paint what happened in it.

I remember seeing a vast, bright, glistening, and golden light in what felt like a Ferris wheel…Since then, I’ve had several experiences which have shown me that there is far more to life than I could have ever imagined. 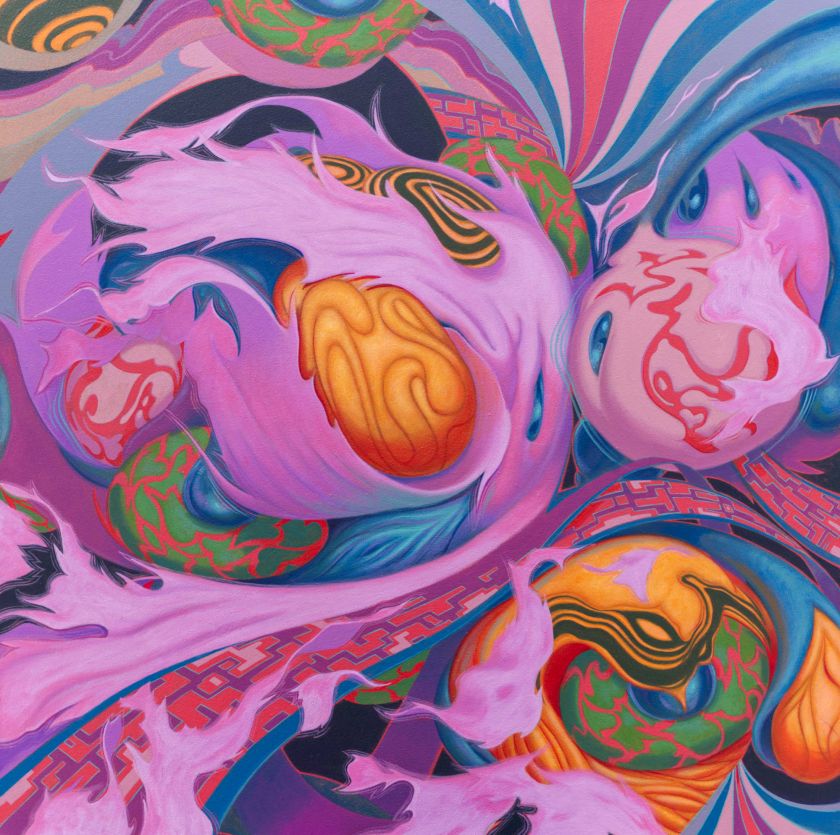 Aside from your art, where else do you quench your thirst for this topic?

Listening to Terence Mckenna’s lengthy talks on YouTube (God bless whoever recorded them), he is such a captivating orator. Reading and contemplation also satiate my hunger. I regularly spend time in meditation and remember, which I couple with journaling and questioning. But I’m currently reading Brian Muraresku’s ‘The Immortality Key – The Secret History of the Religion With No Name’ – it’s a fascinating book that is unearthing how psychedelics played a role in the origins of Western civilization and perhaps religion.

Your work is so colourful – do you know what palette you’ll use before you begin a piece, or does it just evolve?

It’s a little mixture of the two. For most of the paintings in this body of work, I was looking into sacred spaces—especially mosques such as those in Uzbekistan and Iran. And what I fell in love with was the sensation of how the colours interacted with each other because of the intricate patterns. So, I used many of these colours as the basic templates for my colour palettes and adjusted them slightly. But as I started laying them down on the canvas’, they started to change and evolve as if the painting had its own plan.

Did you always know you wanted to be an artist?

No, not really. I never knew what an artist was. And the perception I had of what an artist might be was whatever I had heard about Davinci. I remember that was the only artist’s name which I knew, and even so, I don’t think that I was aware that he created paintings. So the idea of being an artist as something to pursue full-time only came into my sphere of thought around 3-4 years ago. 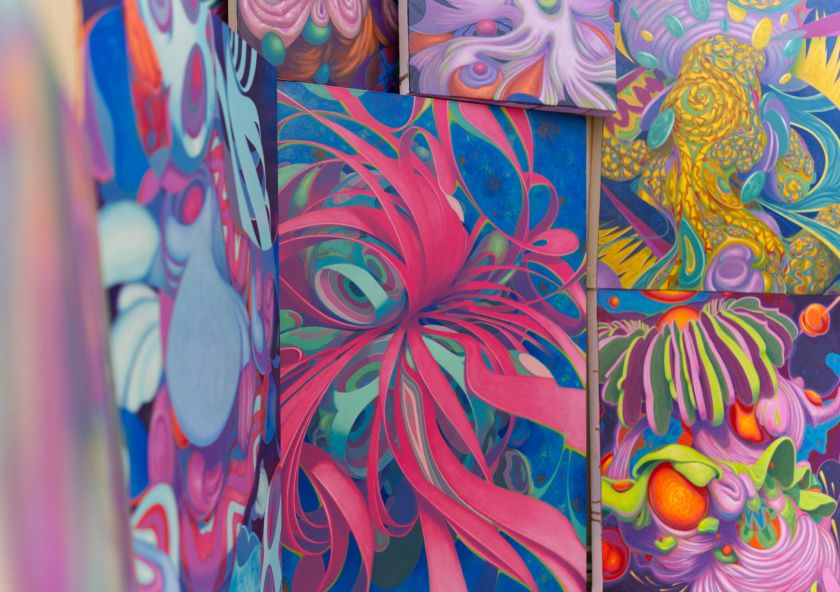 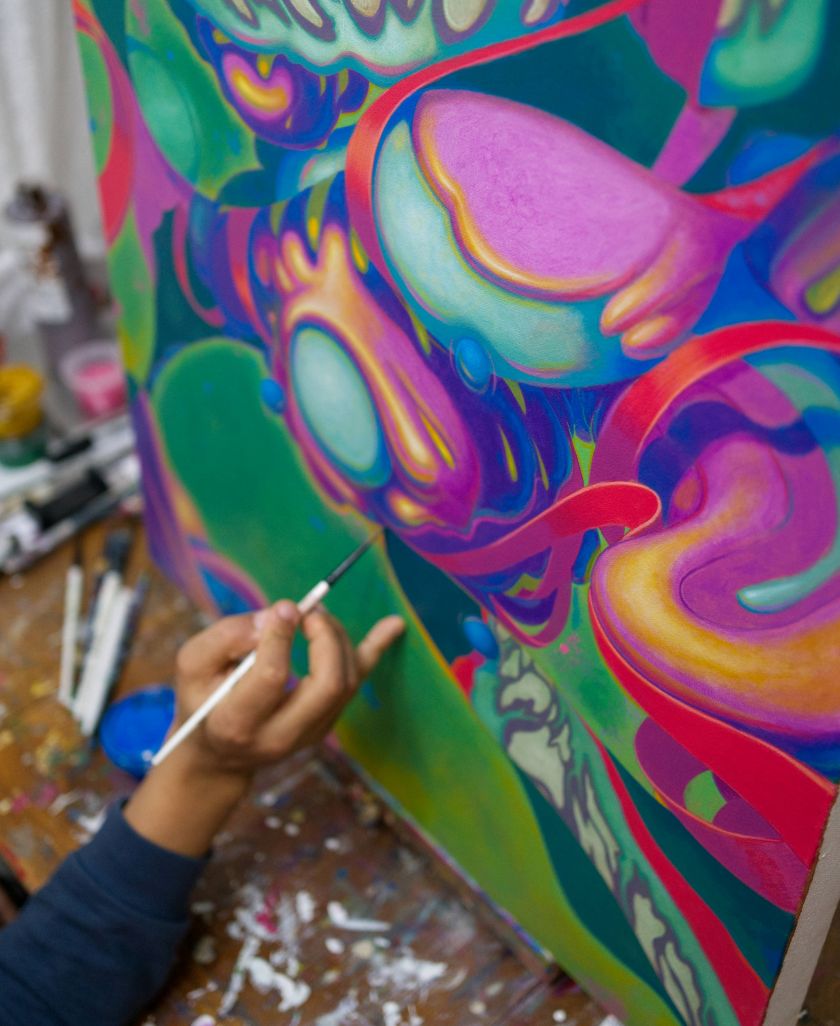 What inspirations still inform your work today from childhood?

One of the first books that I obsessed over at around 4/5 years old was a visual encyclopaedia by the publisher DK. I poured through constantly, and that book inspired a sense of joy for the inner world of objects because the pictures within it were of all the things of this world but broken down. It had ships, telephones, buildings, animals, the human body, and so much more. And today, as I’m creating work, this imagining of the internal dynamics or structure of the forms that I create in my work is always at the forefront of my thinking. But a lot of my early inspirations, such as Spiderman, Motocross bikes, Grand theft auto, football shoes and all of the other things, don’t directly inform my work today.

Did you find that painting helped you get through the pandemic, or did the paintbrush not move?

Yes, it helped a lot. Being creative has always been a sort of escape for me in life, and over those initial 6 – 12 months after the first lockdown when the media rammed up the fear-mongering, I unwittingly doubled down on my creative time and created a lot of work. Most of which wasn’t necessarily finished works, but what became most important for me during that time was the process because I began seeing its lessons, which teaches you a great deal about being present, calm, and relinquishing your expectations and attachment to outcomes. They’re lessons that I’m continuously learning, but they acted as gentle reminders of what’s important and kept me grounded during the lockdown.

Inaquien by Jarvis Brookfield will be his first solo show, launching on 17 September at LCB Depot in Leicester. Discover more at or follow him on .