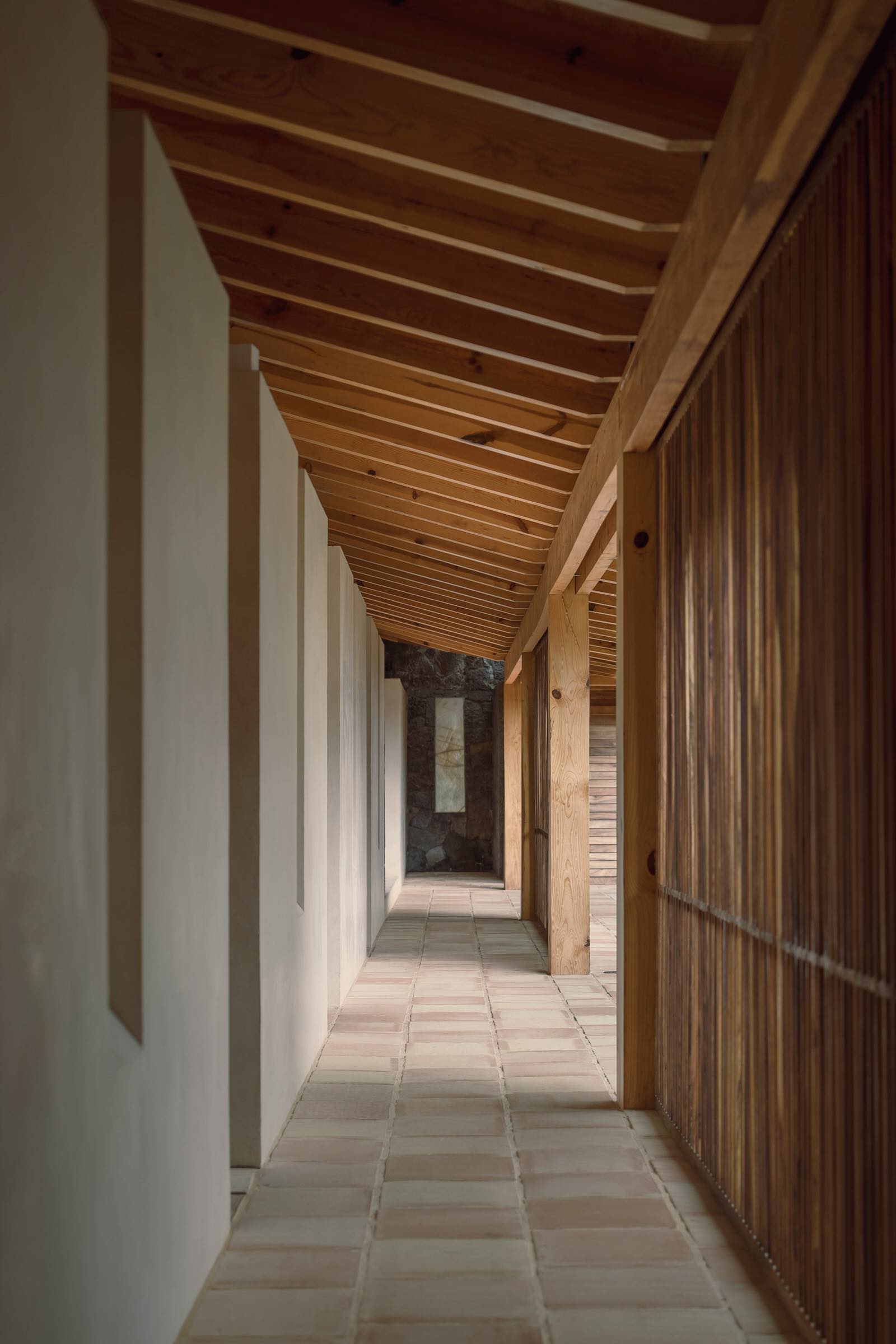 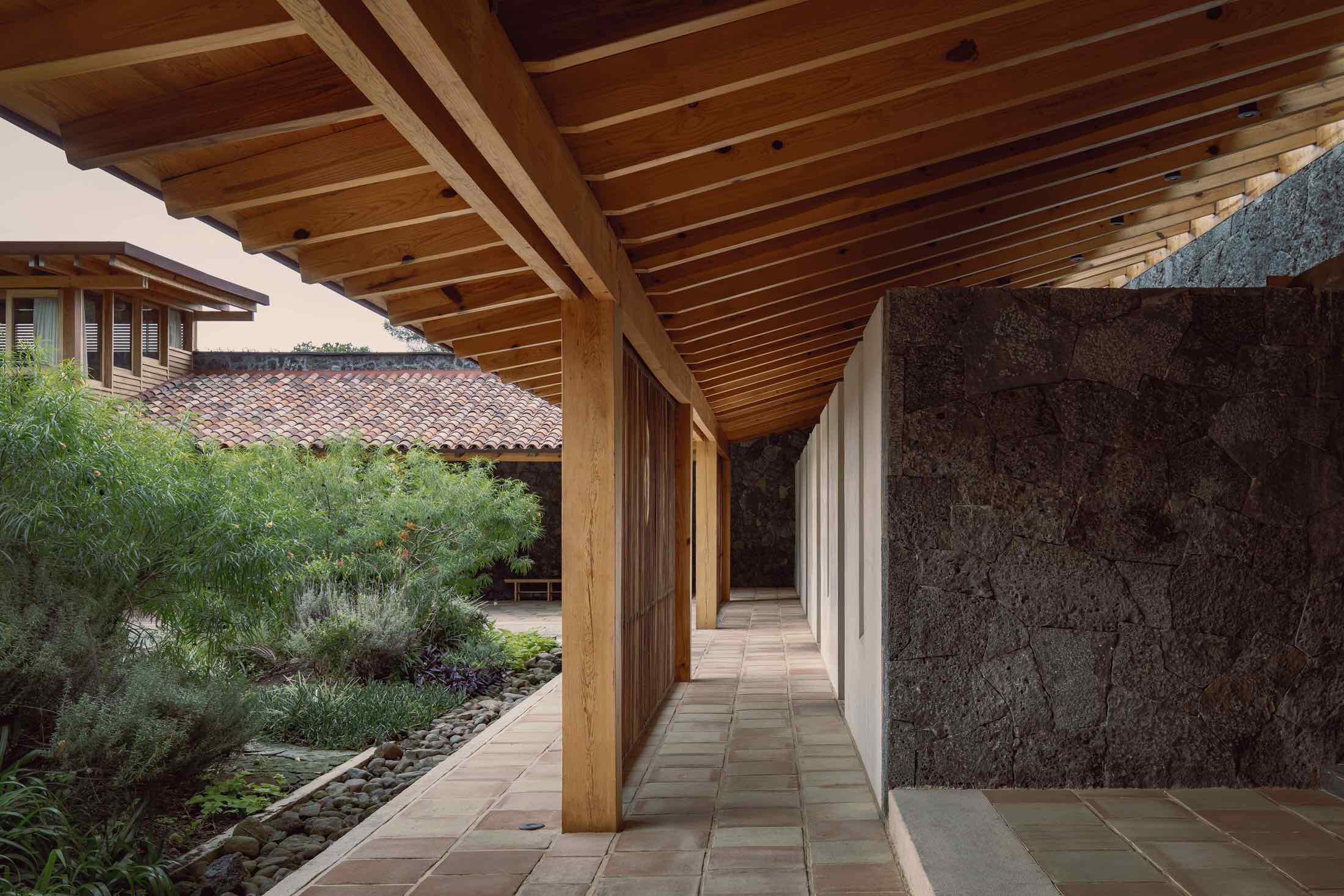 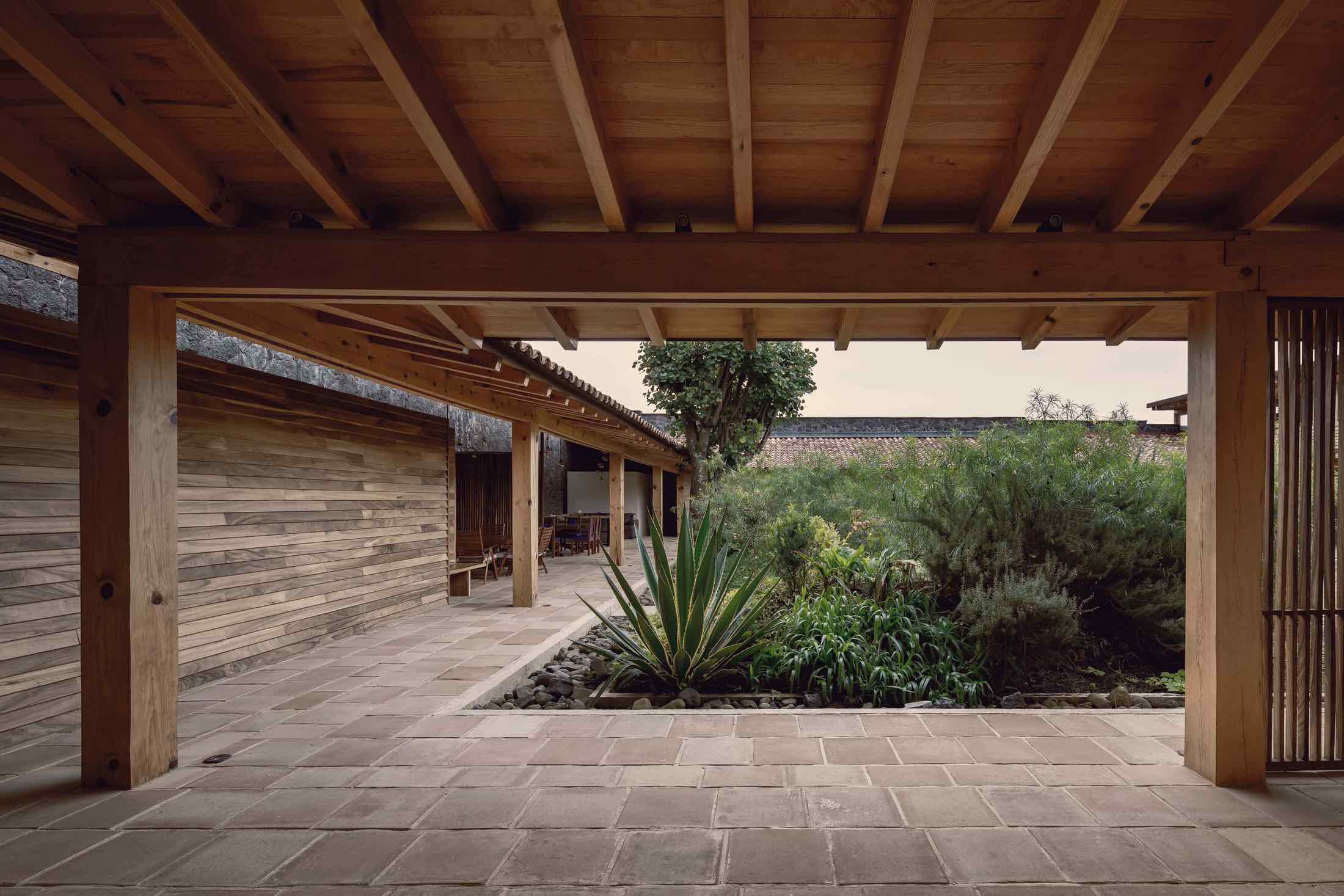 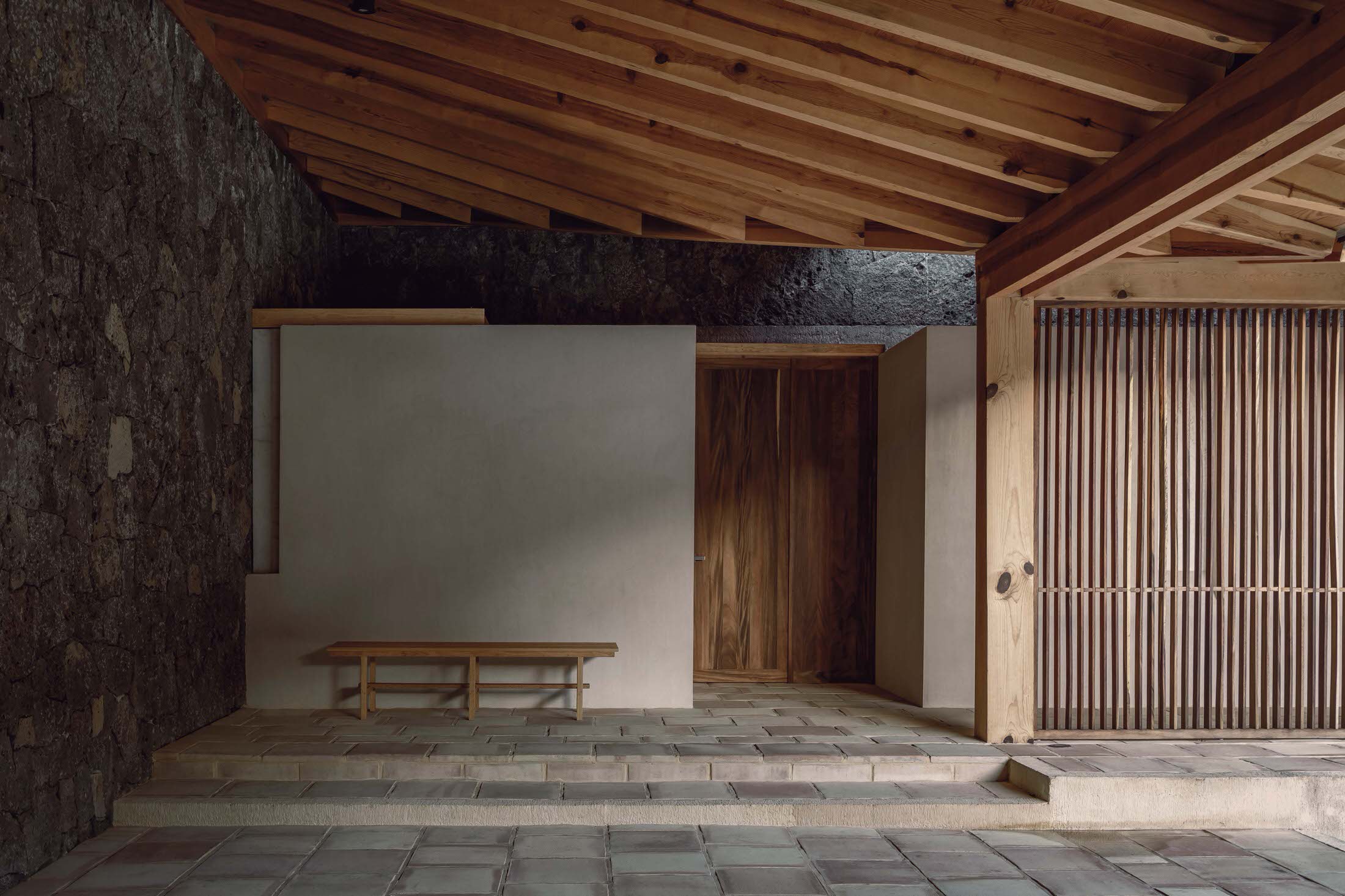 There’s something thoroughly Willy Wonka-ish about the Mexican valley town of Tepoztlán. Known for its exotic ice cream flavours, great weather, and otherworldly flora and rock formations, it earned the title of Pueblo Mágico, or Magic Town, back in 2002. So naturally, it stands to reason that it’s a favourite among locals and tourists alike. “With a population of a little more than 35,000, it is a quiet weekend escape for city dwellers and the perfect retirement oasis,” says David Martínez Ramos, founder and principal architect of Mexico City-based design firm , who was brought on board to build a weekend home for one family of city dwellers. “They found a corner lot in a gated community. All they really wanted was a hacienda, but a modern version of it. After all, they do eventually plan to use it as a retirement home.” In a fitting tribute to its plantation-like layout, David, whose team also included José Flores Buzo, Eduardo Sosa and Andrés Dillon, named the project ‘La Hacienda Jardín’ (loosely translated to ‘Farm Garden’).

Despite its storybook air, the houses here sport seemingly sober facades, in a bid perhaps, to hold the mystique within. David took inspiration from the pared-back surroundings when crafting the home’s exterior (the construction was outsourced to Carlos Sanorte of CS8X), but his take on everything else was a distinct departure from Tepoztlán’s signature style. 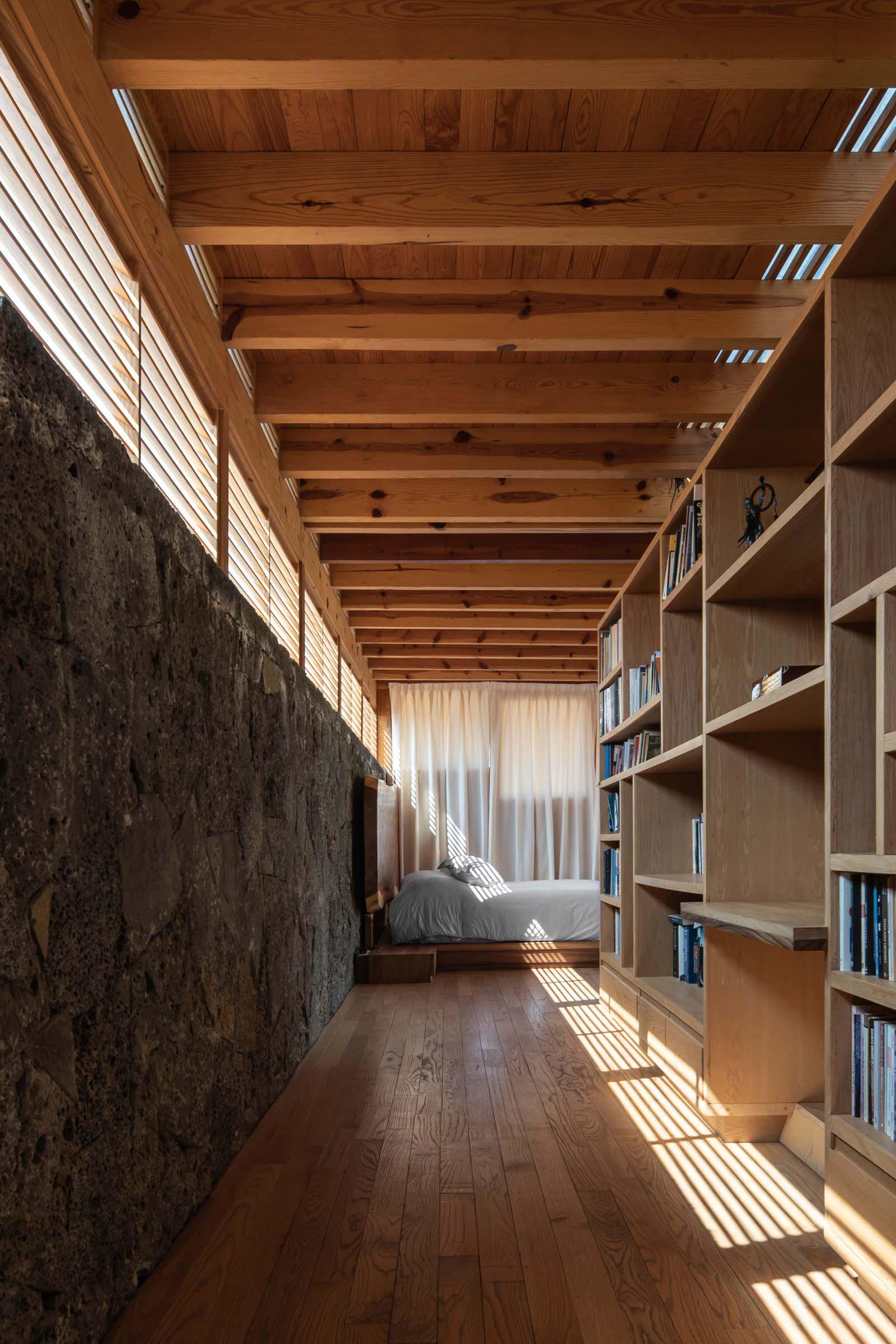 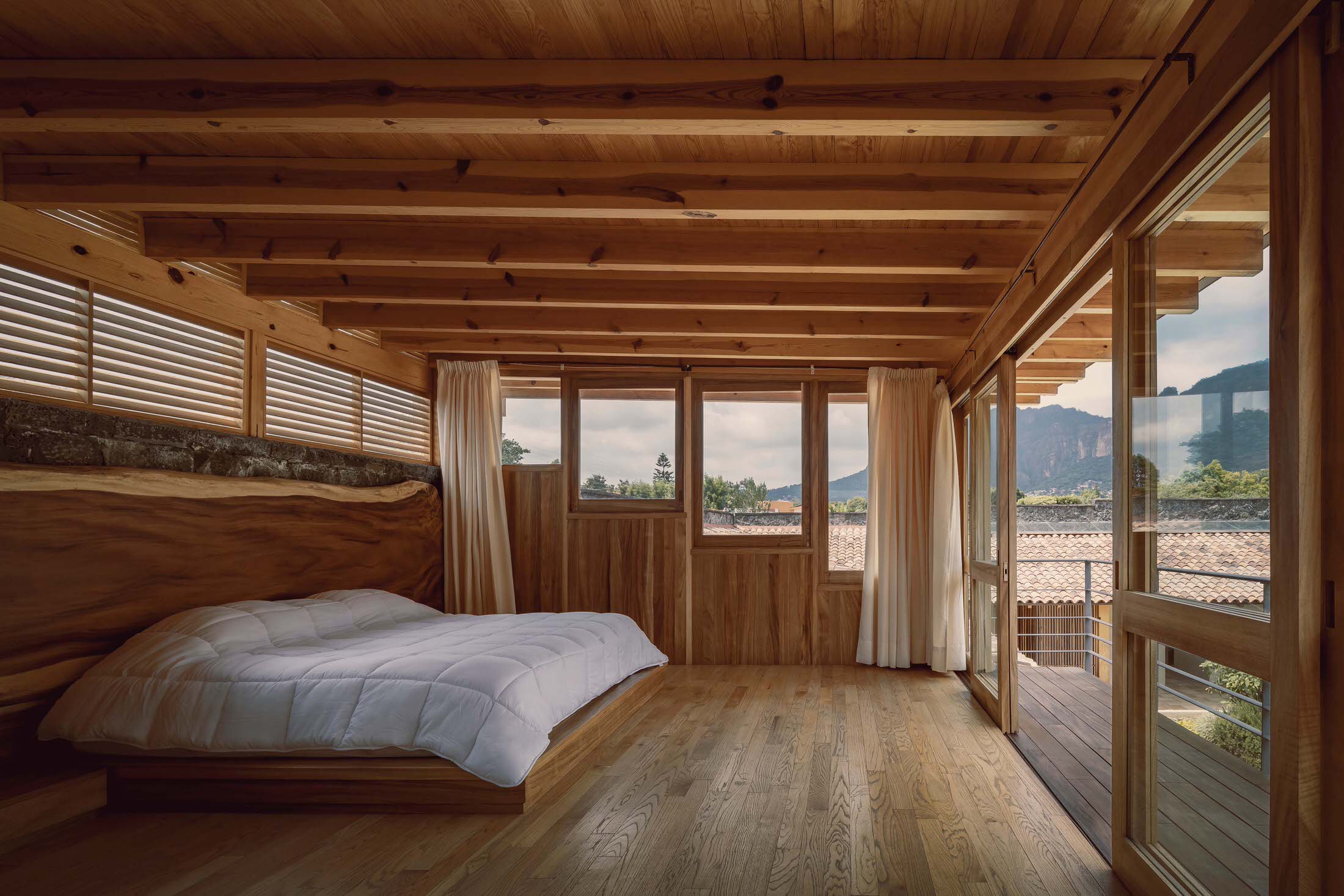 “The architectural programme questions the area’s predominant practice of first fencing off a property, inserting a building and landscaping the rest,” says David who upended the rulebook by creating a semi-open enclosure with a lush garden at its heart. “The courtyard serves as a circulation space, dissolving the division between the public and private spaces.” In a masterstroke, David angled the roof to frame sweeping views of the Tepozteco mountains beyond. And for the material palette, he chose elements that mirrored the landscape: Texcal stone was used for the perimeter wall, Durango pine went towards the main structure, and the latticework and finishes were fashioned out of huanacaxtle wood (the woodwork was done by Julien Pinon of L atelier). “The terracotta tile floors, tiled roof and brick-and-chukum walls create a palette that responds sensitively to each area,” shares David.

What’s perhaps most special about the property is that the rooms are divided into constellations that each share a relationship with nature. To the right of the entrance, for example, a clutch of secondary rooms face a private garden, while a series of terraces and common rooms offer vistas of the surrounding landscape. With light-toned wooden panels enveloping the floor and walls and ceiling, the bedrooms exude a rustic log cabin vibe. 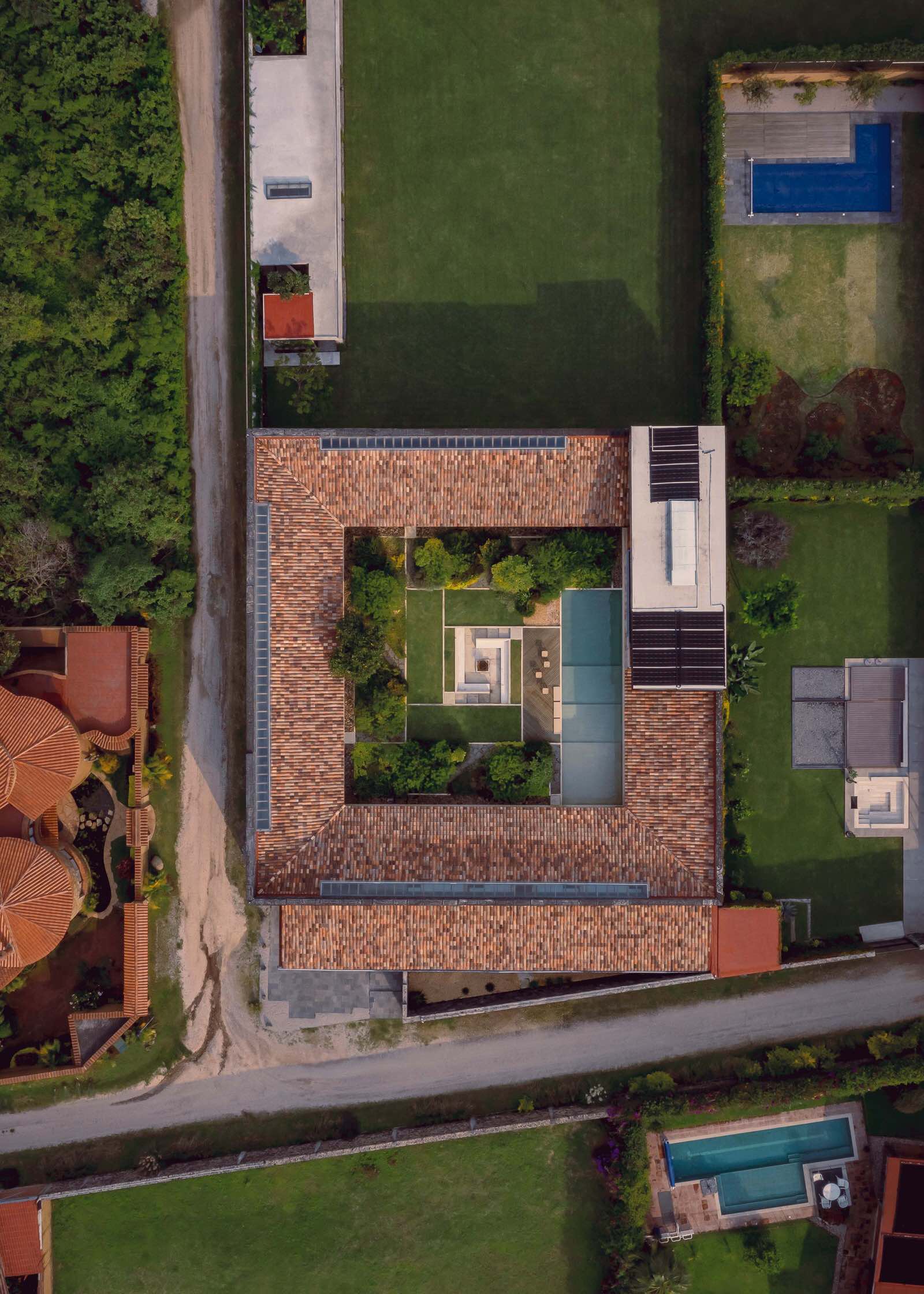 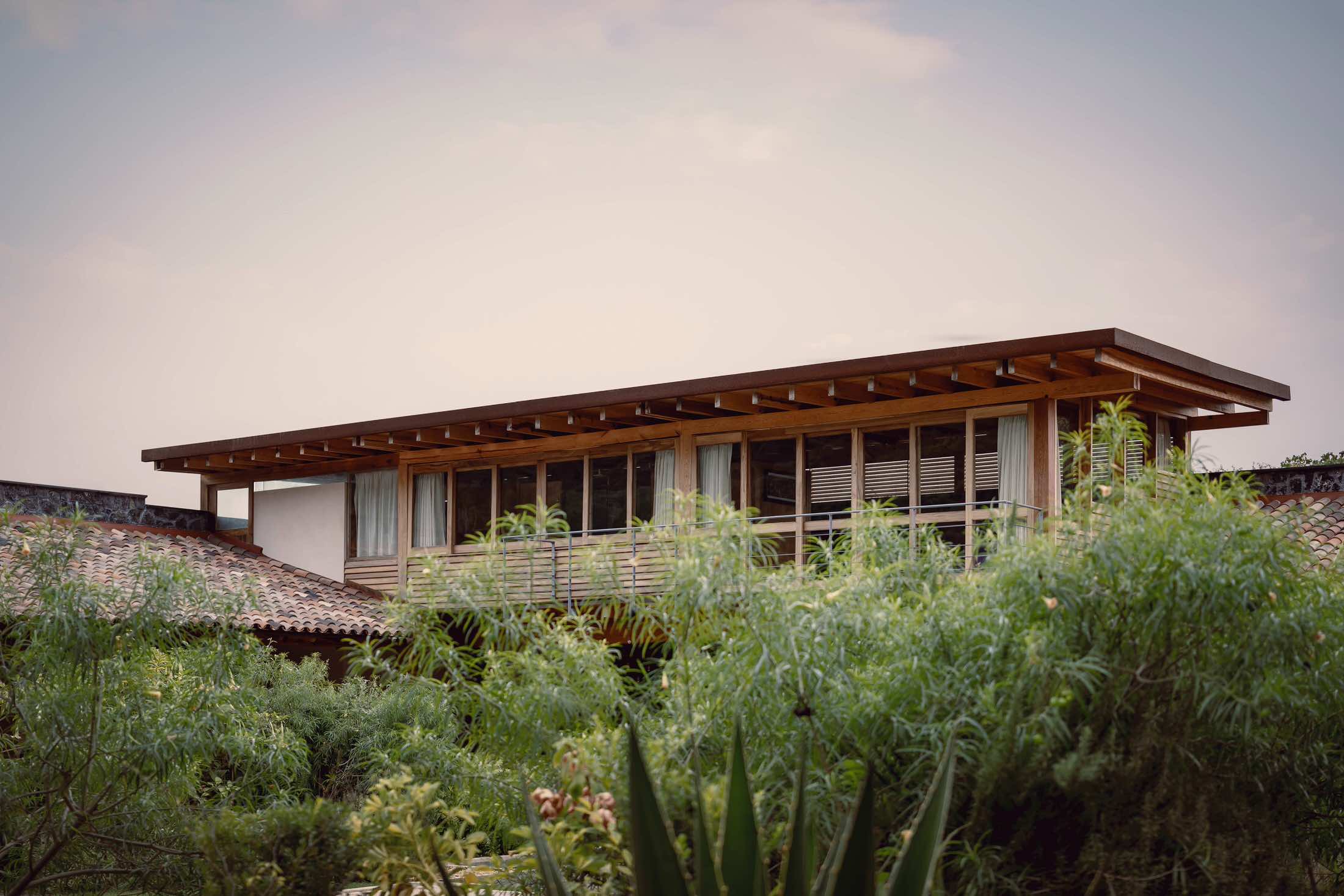 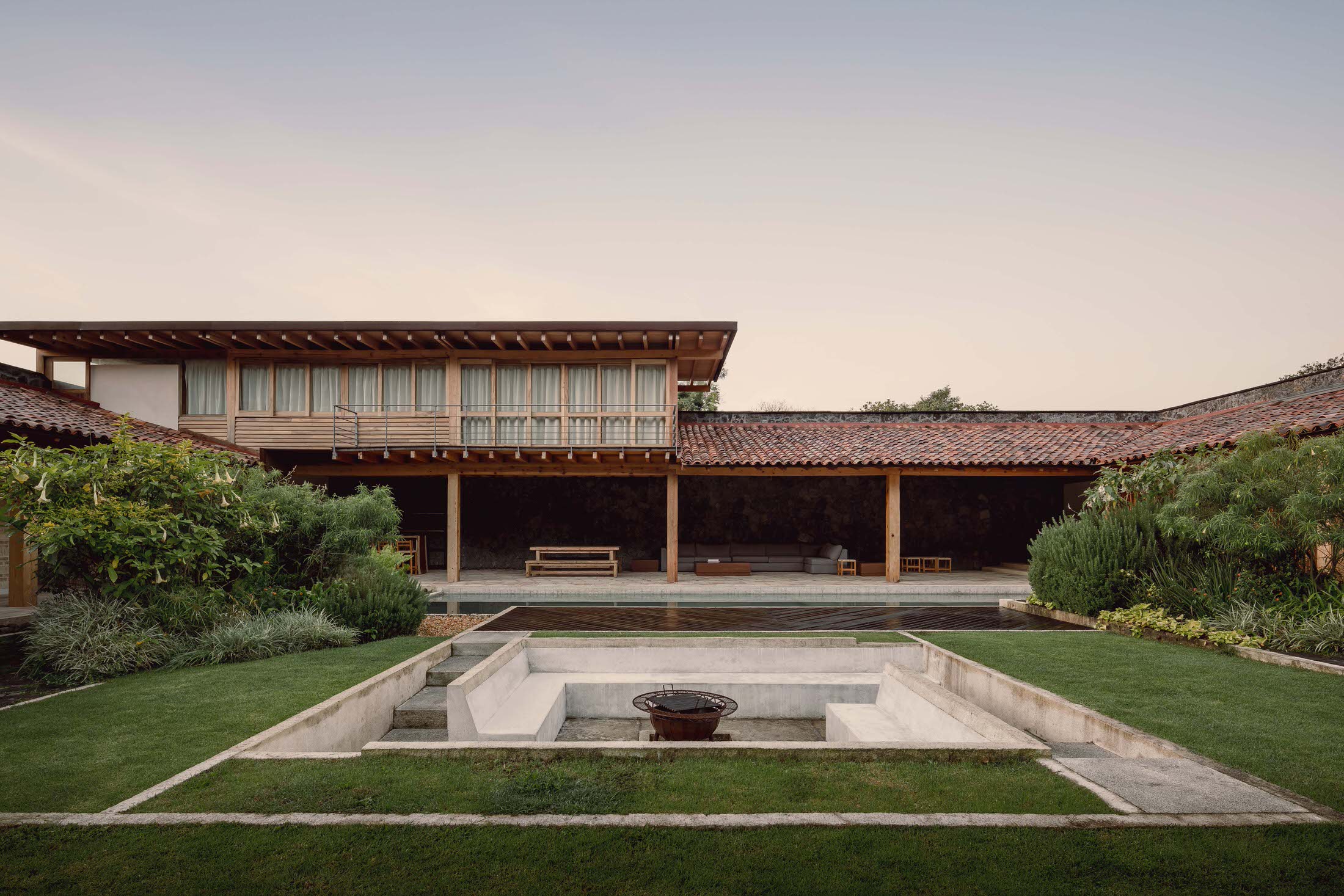 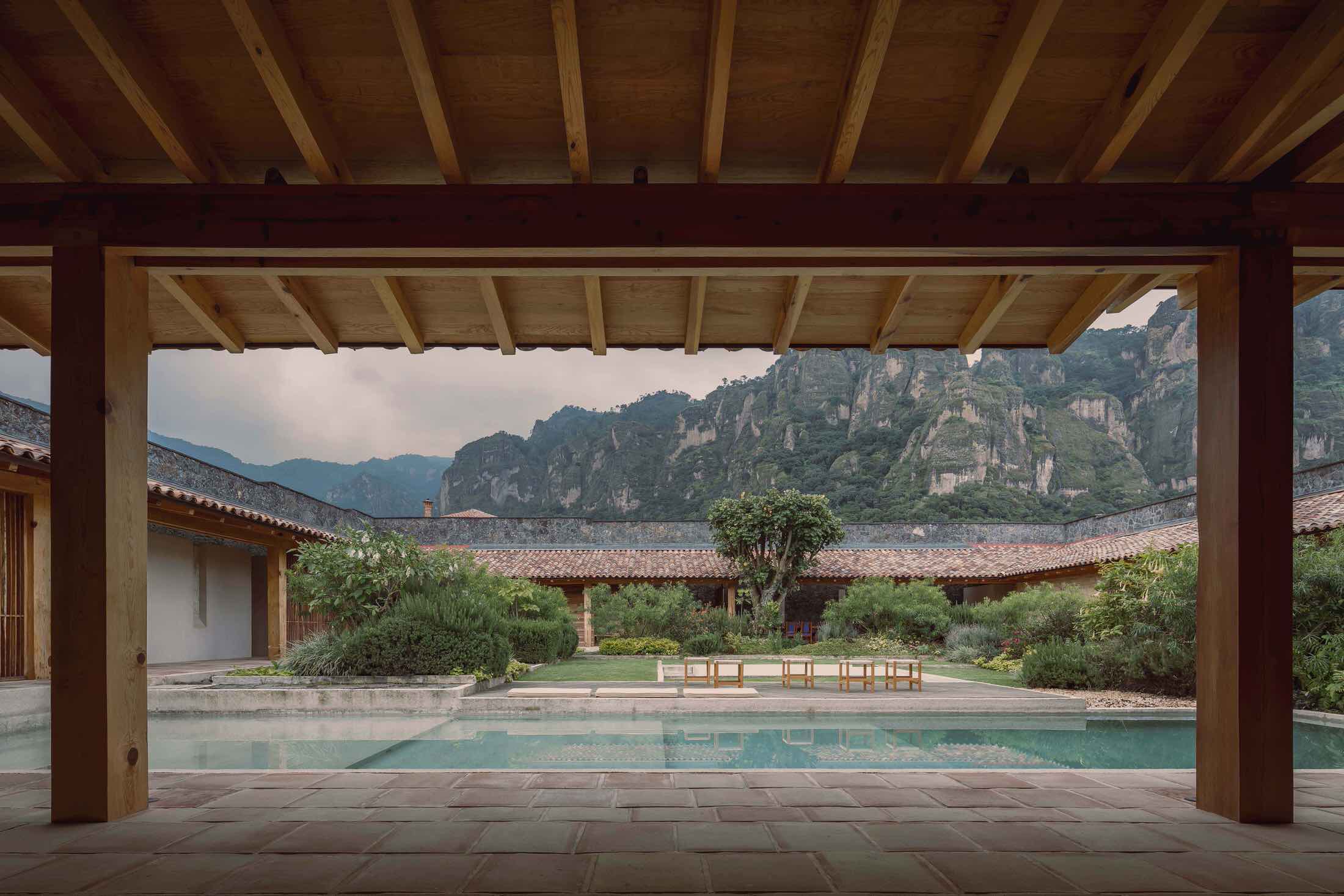 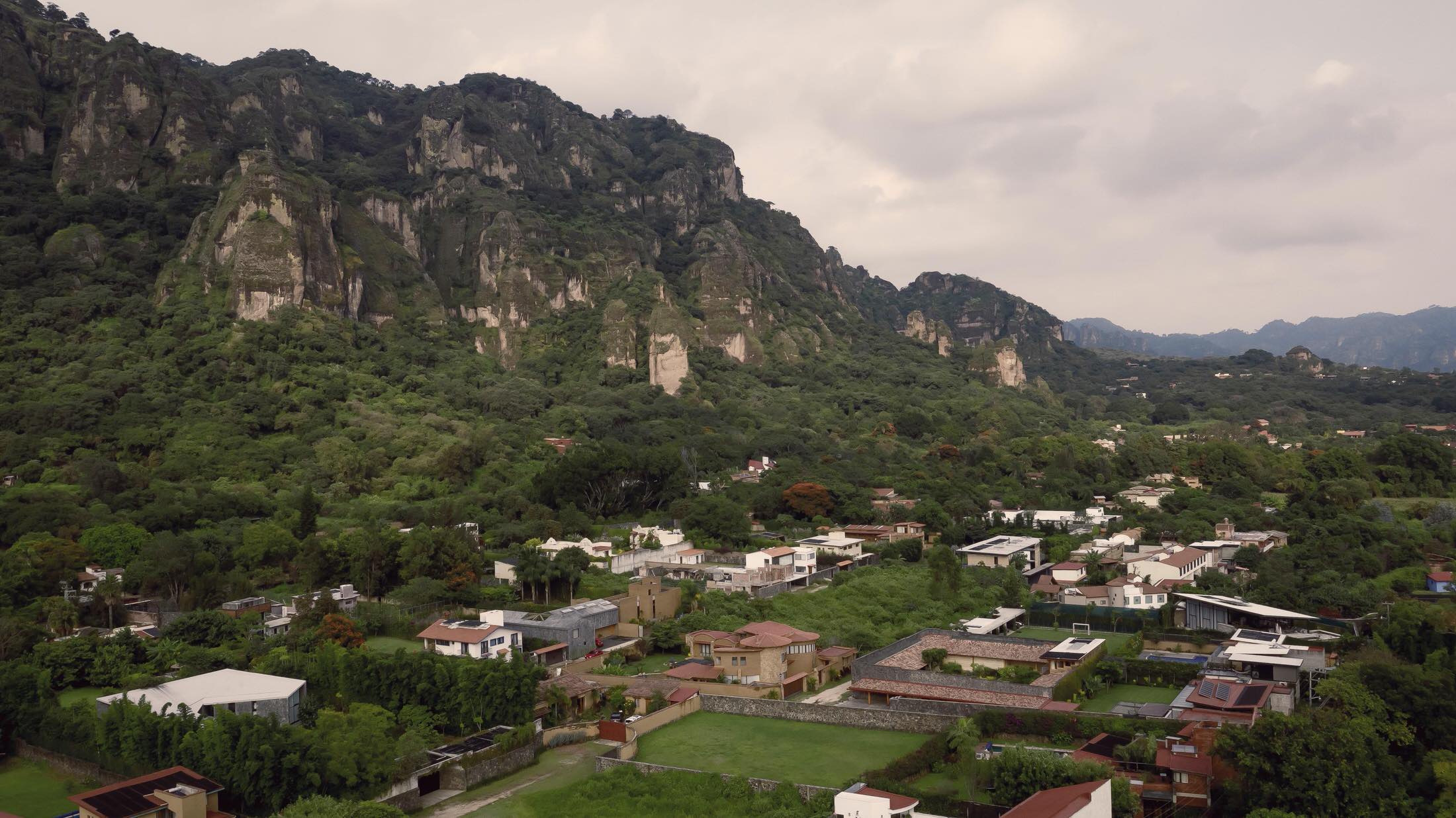 The home’s relationship with nature isn’t limited to aesthetics alone, thanks to a spate of active and passive sustainability solutions. “The project features electrical systems that draw on solar panels and heaters, and the drainage is underpinned by a septic tank, irrigation from water catchment systems, and natural absorption wells,” explains David. The machinery is effectively complemented by nature. Everywhere you go, it’s clear that natural light and ventilation are faithful followers, and the internal microclimate, David reveals, is remarkably pleasant, thanks to the carefully cultivated vegetation.

“In an area where cell phone service is very low, electricity is intermittent and water is scarce during the dry season, the project emphasises what has always been most important–the mountains and nature, experienced through the landscapes, layouts and materials,” reflects David. Given that the owners plan to use the home well into their golden years, it really is the ultimate hideaway.