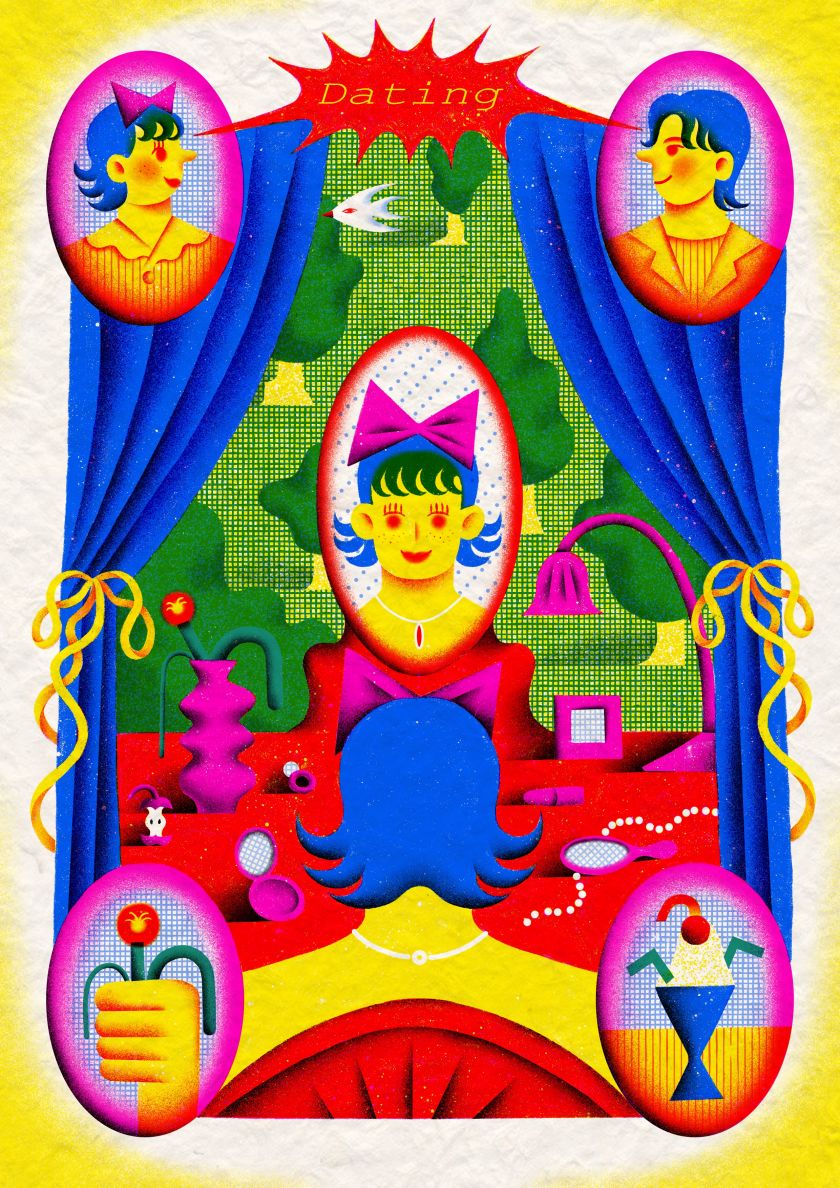 Vintage paper, daily fantasies, and retro-futurism are just some of the many inspirations that fuel illustrator . Bright, bold, and impossible to miss, Megan’s art also focuses on female perspectives to tell unique stories.

Originally from China, Megan Du is a London-based artist studying illustration at the University of the Arts London. Her desire to be an illustrator stretches back to her childhood when her family would praise her drawings and display them all over the living room wall. “It was like my first mini-exhibition,” Megan tells Creative Boom.

At the same time, she was constantly being exposed to comics, magazines and picture books with a look to becoming a painter or a fashion designer when she grew up. “To this day, I still miss my childhood summers, when I would lie on the floor and draw while watching cartoons, surrounded by my favourite comic books and magazines and a seemingly never-ending supply of cold watermelon, sour plum soup and ice cream.” 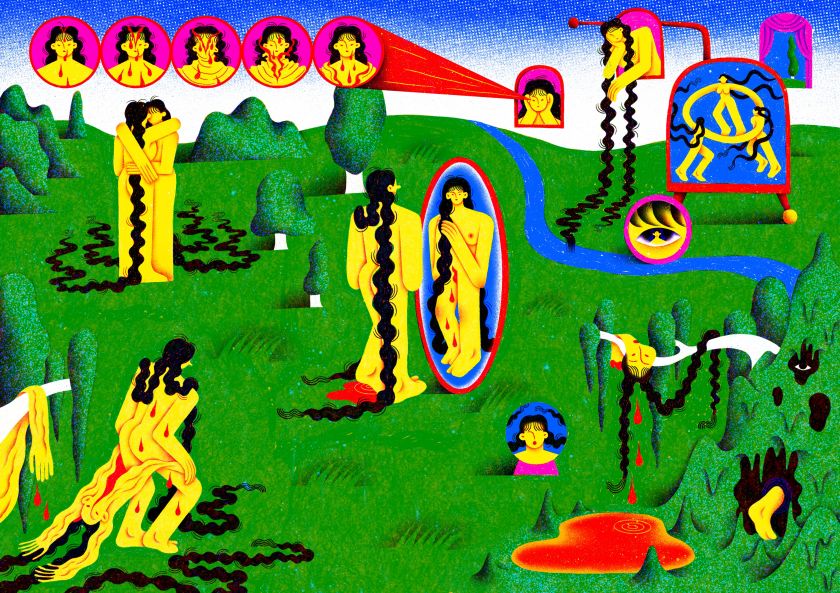 Dreams are never straightforward things to achieve, though, and it was while pursuing her artistic aspirations in her home country that she ran into obstacles. “I learned that every Chinese student who wants to study art or design in college must take an art exam,” she explains. “To pass this exam, Chinese students will receive about six months of art training, during which everyone is asked to draw the same things with the same tools and methods, which I found to be very frustrating and uninteresting.”

This process made Megan sceptical about drawing for a long time, so instead of sketching, she changed gears and majored in visual communication. “I thought it was a very free field, and you could express yourself in any way you wanted.” It wasn’t until an instructor showed Megan magazines and independent comics from America and Europe that she decided o get back into drawing.

“That long lost passion filled my heart, and I decided to start drawing again,” she says. “I found a lot of magazine publishers from the UK and Europe in a comic store, so I decided to study illustration in London and work as a freelance illustrator.” 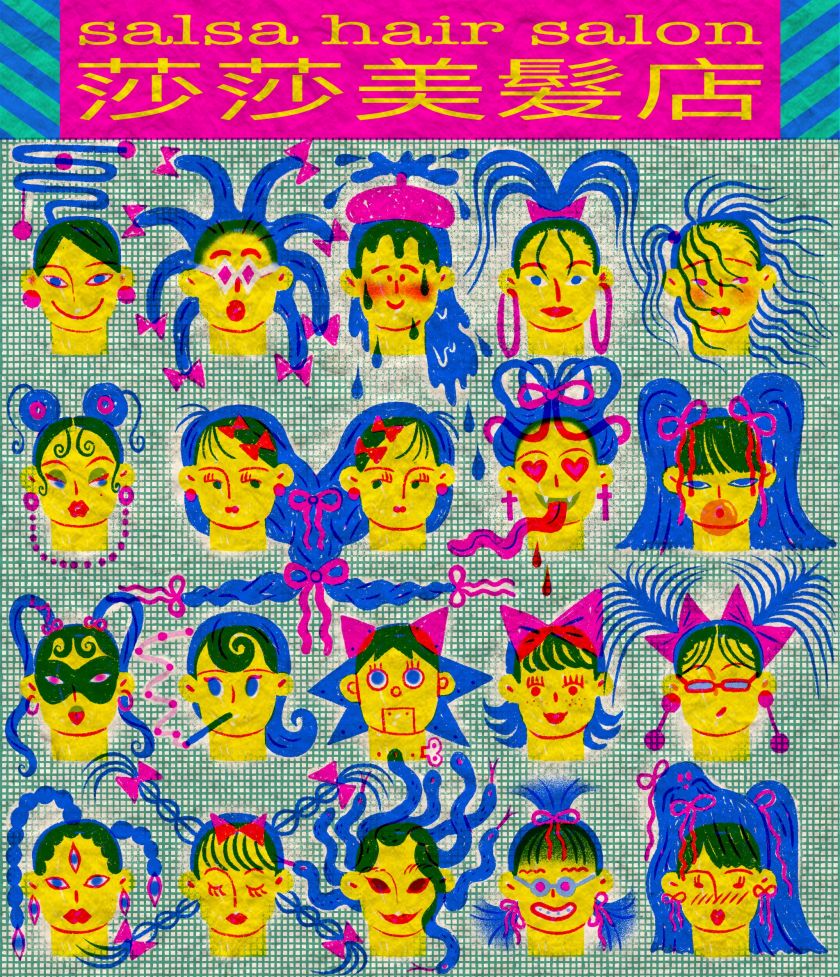 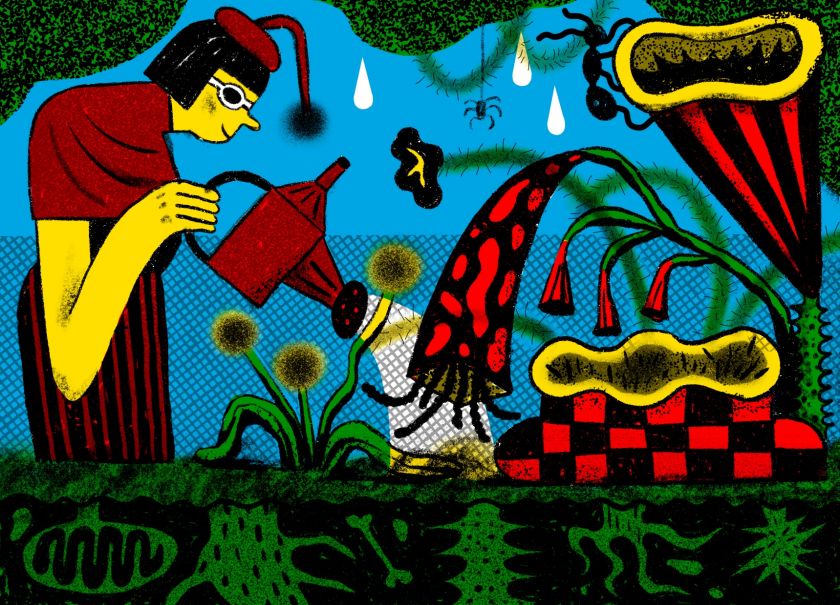 Having grown up in a rapidly developing internet era, Megan drew her creative inspiration from many different places. However, the female perspective is one constant she is keen to prioritise. “I always narrate from a female perspective, with women as the main narrative,” she says. “I am also inspired by emotional expressions and daily fantasies, and I will record new stories that come to my mind anytime and anywhere.”

Studying fashion design during college had its benefits, too, as Megan says it taught her how to make quirky character shapes and interesting costume compositions. “But honestly, what influenced me the most was the vintage paper culture,” she reveals. “I love old posters, prints, matchboxes, posters from Shanghai in the Republic of China, or some Czech illustrated books. The bold colours, fascinating textures and interesting typography make me addicted to it.”

Speaking of colours, bright pink is Megan’s favourite. “You can see bright pink in most of my work because I want to convey a happy, lively vibe, like the pink jumping jellybeans I ate as a kid.” In terms of the rest of her visual language, Megan’s undergraduate background in graphic design has made her work look decorative, with a flat perspective where the elements in the images tend to be geometric. “My images are like a formalised stage play,” she says, “with each character framed in a relatively static body language.” 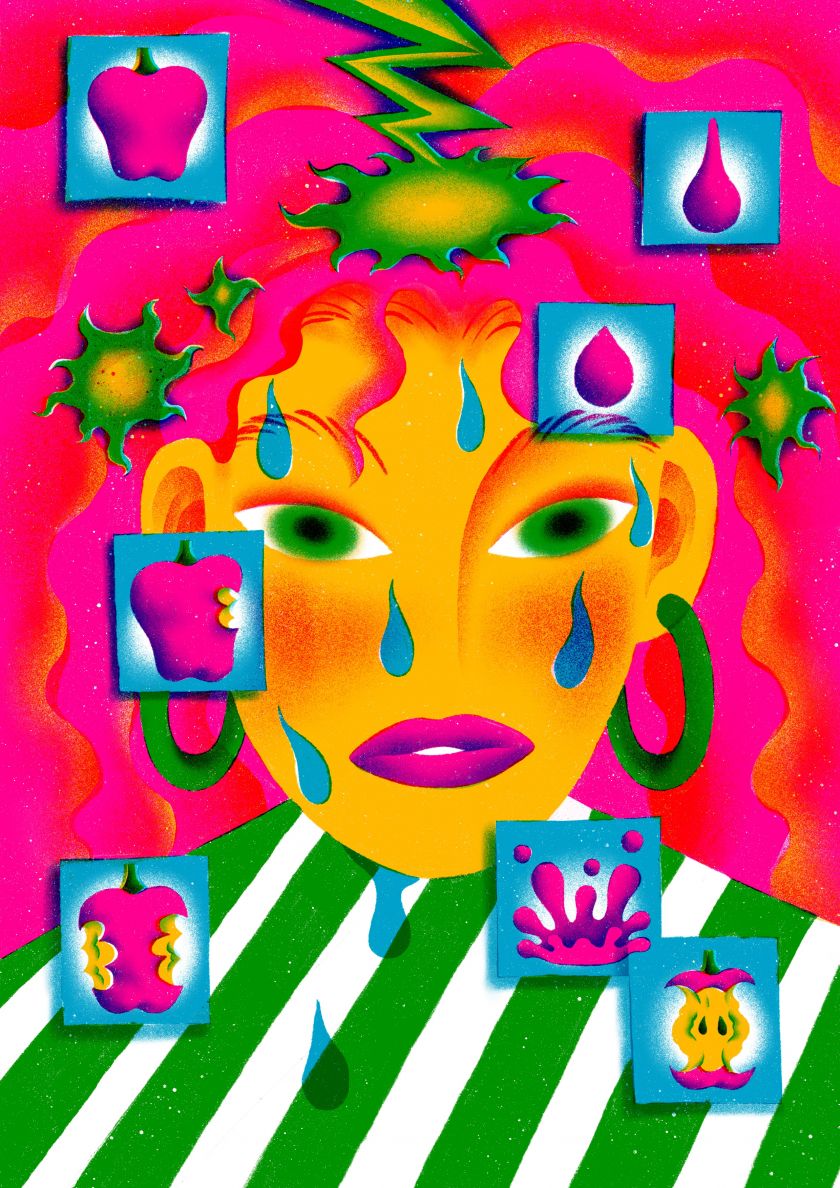 Megan’s work has a wonderfully tactile quality to it, so it’s no surprise to learn that she still prioritises traditional working methods. “I like to sketch with pencil on paper first and then use my computer or iPad to work on it. Sketching on paper makes me feel unburdened, and it’s okay to make a mistake and change the paper.

“Even though we are now in the electronic age, paper is still irreplaceable in my mind. I have tried many printing methods over time, my favourites being risograph and screen printing. Risograph printing is so colourful and beautiful that I can’t get enough of it. I’m always exploring new areas, such as clay, ceramics, papier-mâché sculpture, and sometimes working with a new tool that you’re not familiar with can produce great results.”

On her website, Megan says that she loves retro but is opposed to anything trendy. This springs from her fascination with vintage culture, particularly the decade of full-on colour, the Eighties. “I am very interested in retro-futurism. People’s fantasies and hopes for a magnificent future in olden times make me experience both an optimistic romance and nostalgia.

“I’m also fascinated by the print of the last century when information was disseminated on paper, and people used simple equipment to create unique and beautiful works. It has influenced the aesthetics of my images. I use a few brushes to create textures and enhance the grain in the images, moving closer to the vintage aesthetic I have in mind through printing.” 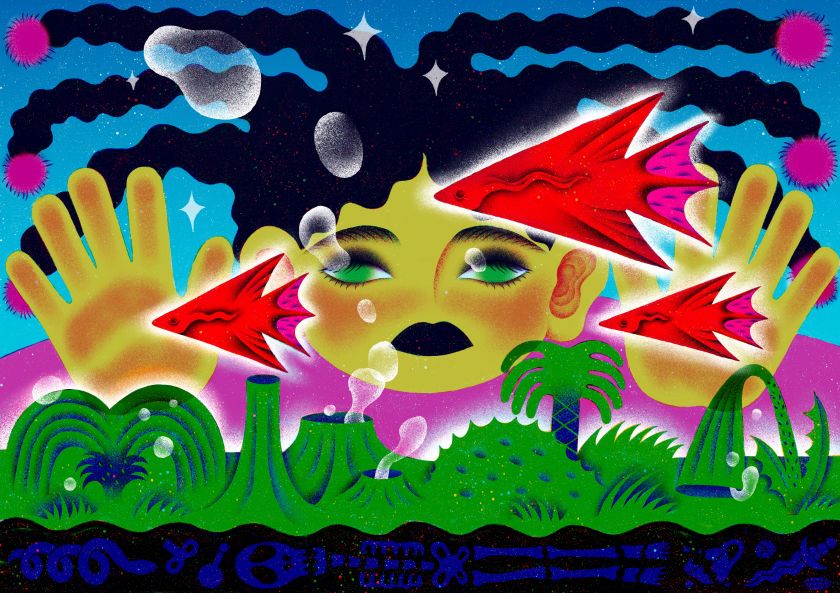 With graduation looming at the end of this academic year, what lies in store for Megan? “I want to continue in the field of illustration,” she says. “I know it won’t be easy, and my father told me to keep my feet on the ground, so I’m focusing more on the present than the future.

“I will continue to explore my personal style. I have already written some new stories, and I want to try to create them and make some new prints, magazines and comics using new printing techniques. Also, I want to create images with more storytelling or try to create moving images and open up more commercial collaborations.” 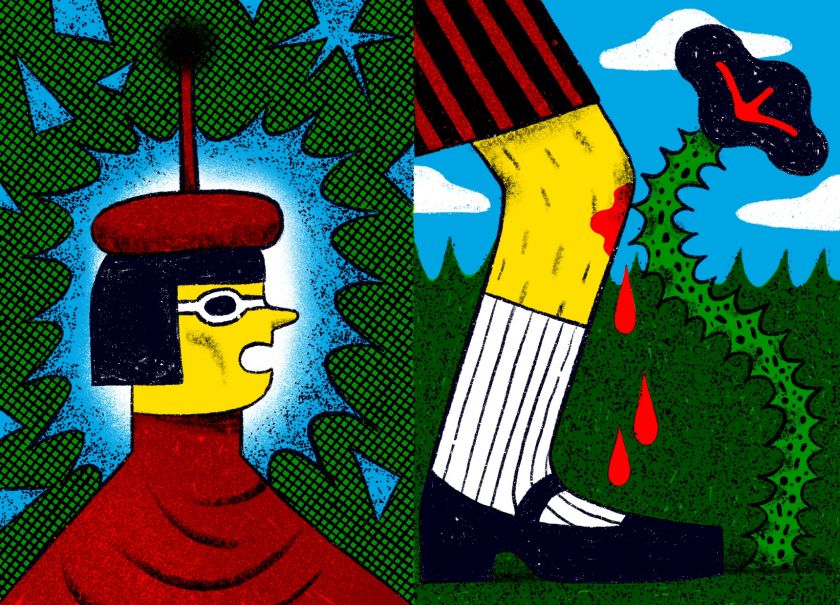 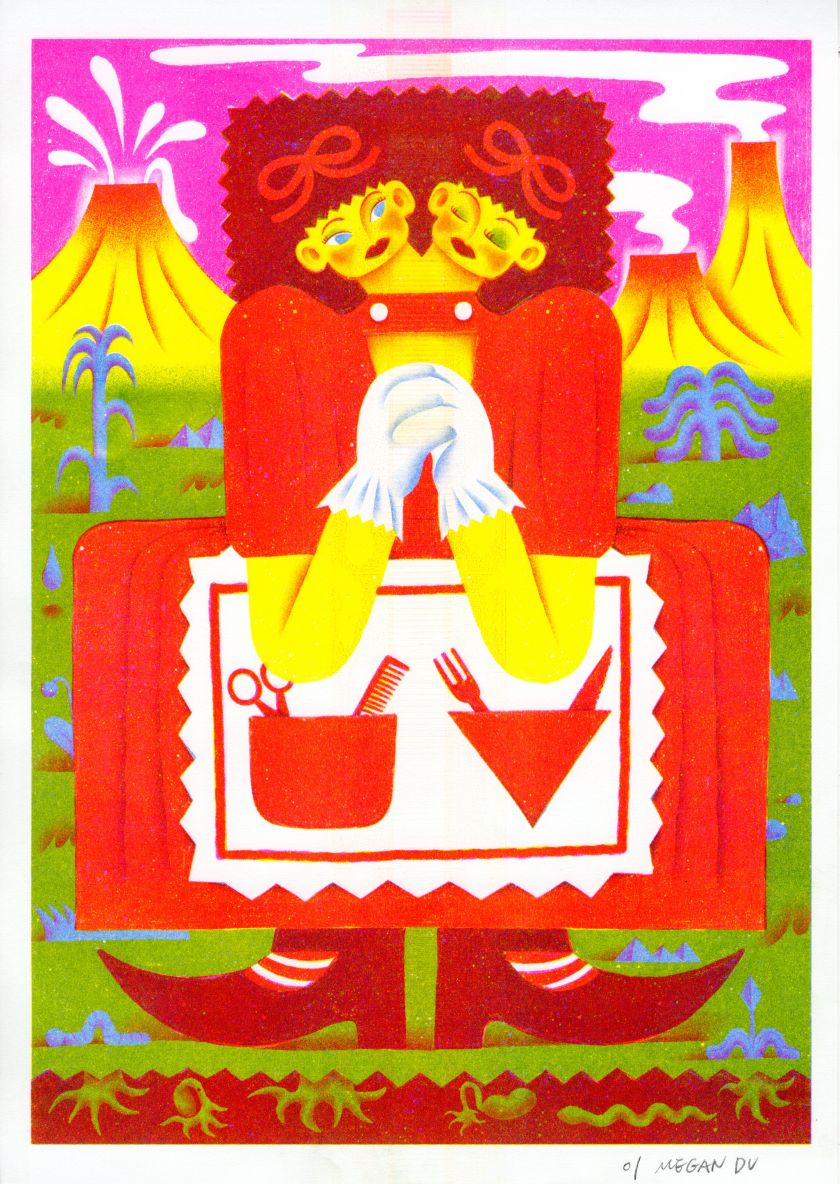