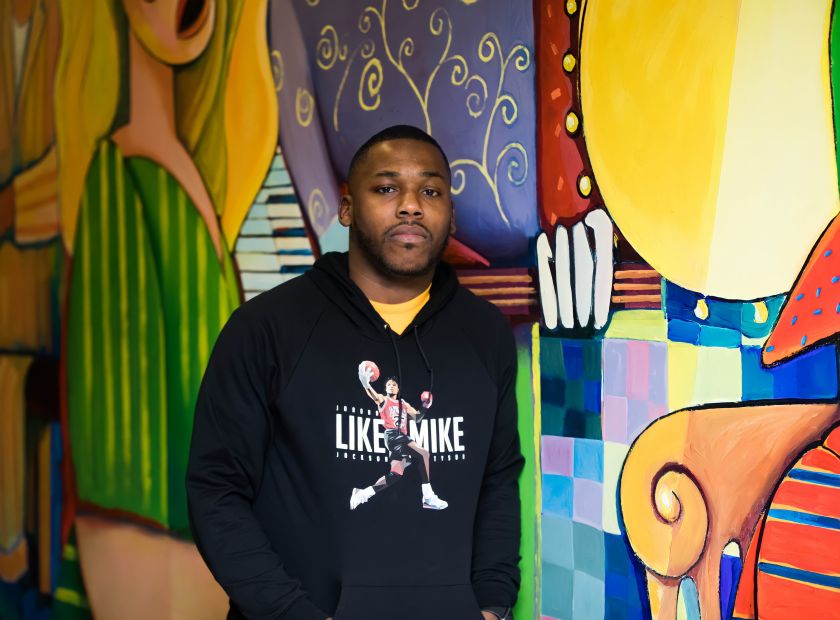 Through his powerfully evocative works, the Philadelphia native hopes to trigger a response from the viewer – a laugh, cry, smirk or frown.

Behind every artist is a clear set of goals or intentions – whether it’s political, emotional or making art for art’s sake. For Philadelphia-born , he strives to trigger an emotional response from his audience through his colourful and painterly works.

Whether you laugh, smirk or feel a little angry, then Michael will know he’s done his job right; he wants you to feel something. Inspired by black culture, pop culture and social injustices, his artworks are at once powerful as they are visually engaging.

Here, we chat with Michael to hear more about his influences, the importance of making art with purpose, and why his next piece might be getting him banned from Instagram in future.

Can you begin by telling us a bit about yourself and your journey into the arts?

I’m a Philadelphia native, and I grew up in the rough parts of North Philadelphia. Growing up, I experienced hardships, and I’ve witnessed a lot of my friends become victims of street crimes. I knew running the streets wouldn’t be part of my path because I was different, and I never liked following trends. I’m the type of person that will go right when everyone’s going left. I was pretty much a low-key righteous nerd. I can say I’m basically the same person – I just have a beard now.

I got into art from watching my favourite tv show, Dragonball Z. That was my show! I loved it so much that I started drawing the characters, and the drawings were accurate. Drawing was a natural gift for me. I knew I wanted to be an artist as a kid, but I had to practice to improve my techniques. And I had a lot of time to practice when I was 13 because I was involved in a car accident that left me bedridden for about a year.

It was caused by a speeding car being chased by the cops, and the car crashed at an intersection, spun around and struck me. It was bad. I was stuck in bed (a bunk-bed respectfully) for months, and all I did was draw. My skills improved 1000%, and I fully recovered from the accident. When I got to the 10th grade, my history teacher saw how well I could draw, so he recommended me to a summer programme at the University of Southern California. I was accepted, and I took a graphic design class. That class helped me realise that I wanted to be a digital artist, and, in 2017, I started my pursuit of happiness and never looked back. 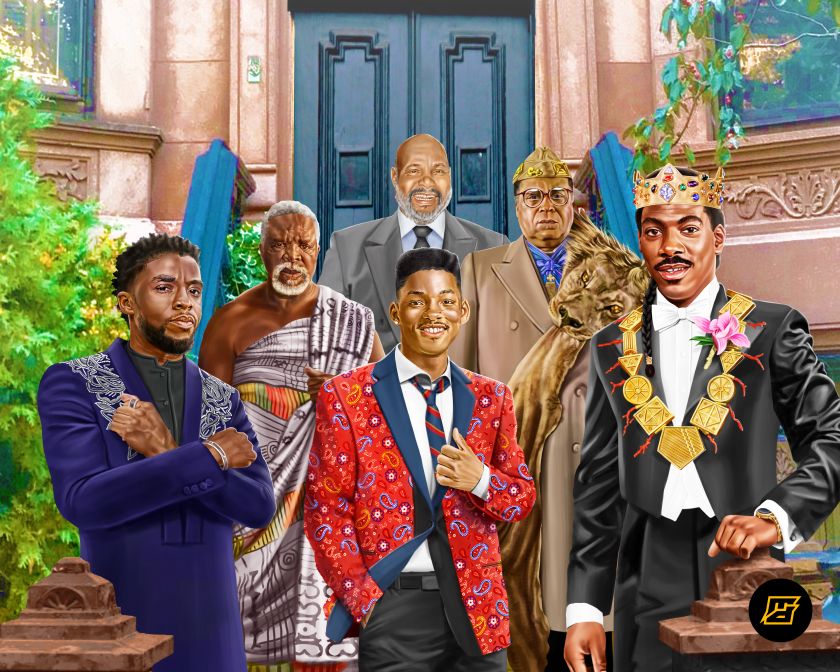 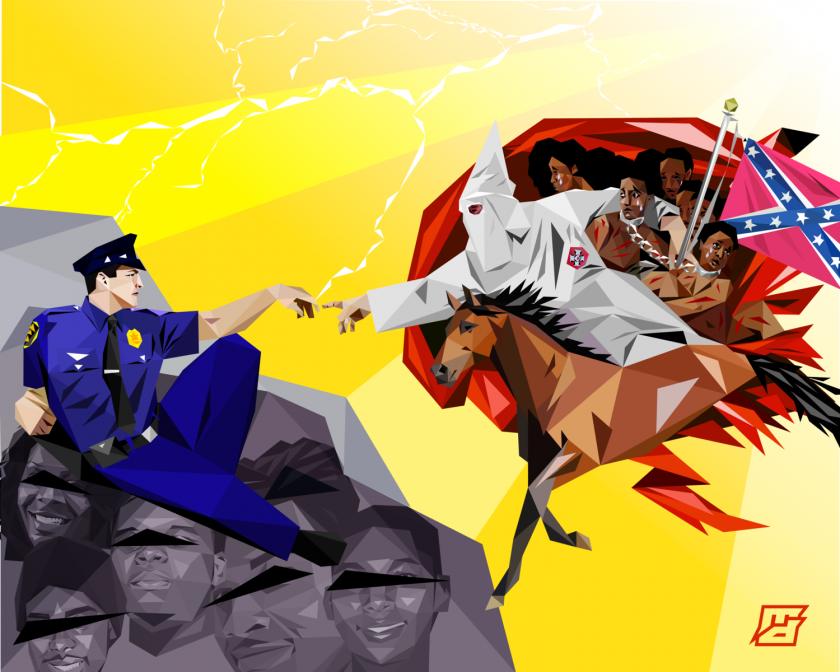 Where do you find your inspiration?

In general, I find inspiration in being inspirational. And, I know that sounds all cheesy, but let me explain; my goal is always to inspire. I believe inspiration can turn into hope – hope into faith – and faith into action. I want people to know their dreams are possible, so they can pursue them. I’ve seen a lot of my childhood friends lose their way and fall to the streets. If they were inspired to keep their dreams as a kid, many of them would be here today. So, I find my inspiration by uplifting others, and I use my art to deliver the message.

When it comes to my art, I’m influenced by black culture, pop culture, speaking up about social injustices etc. I want to make artwork that has substance because it’ll cause some kind of an impact.

I use my art to inspire people to laugh, think, learn, grow, remember, or even be righteously angry. It’s the greatest feeling when my work touches someone, and that keeps me going.

How do you go about making one of your pieces?

My creative process is never the same for each piece. I often think about a message I want to give, especially when it’s about social injustices. Then, I try to find a simple way to visually communicate that message without using words. I want my audience to understand what I’m trying to say without having to explain it. And, if I find a way to make it happen, I’ll execute. Other times, I think my process depends on an idea or concept I have and how I feel. One day, I might want to make something nostalgic for people to reminisce or laugh about, and there are other days when I want to make something ‘deep’ to cause a stir in people. Overall, I intend to influence and inspire.

Can you tell us about a couple of favourite pieces?

My all-time favourite is my Like Mike piece. My mum named me after Michael Jackson, so I just have this ‘Mike’ connection to it. The Like Mike piece displays Michael Jackson, Michael Jordan, and Mike Tyson combined into one figure. I wanted to make a design that reflects an attitude we all should have, and that’s the Like Mike attitude. They were champions, dominators and winners. I feel like that’s how we should live. I love everything about this piece. I have the design on a shirt, and I want to wear it every day. I just think it’s really cool.

I have other pieces that I’m proud of because of the cultural impact they have made. I’ve been told my Birth of a Nation piece is my most important piece. I received many messages from people who love it or hate it. Birth of a Nation represents America’s origin’s coming from slavery. The piece displays a male slave giving birth to the American flag, which a slave master is forcing. I find that some people love it because they see some truth in it, and some people hate it simply because it shows a man giving birth. I chose a male to give birth because it represents how slaves were forced to do the impossible like a man giving birth. It is very interesting to see people react to an image. 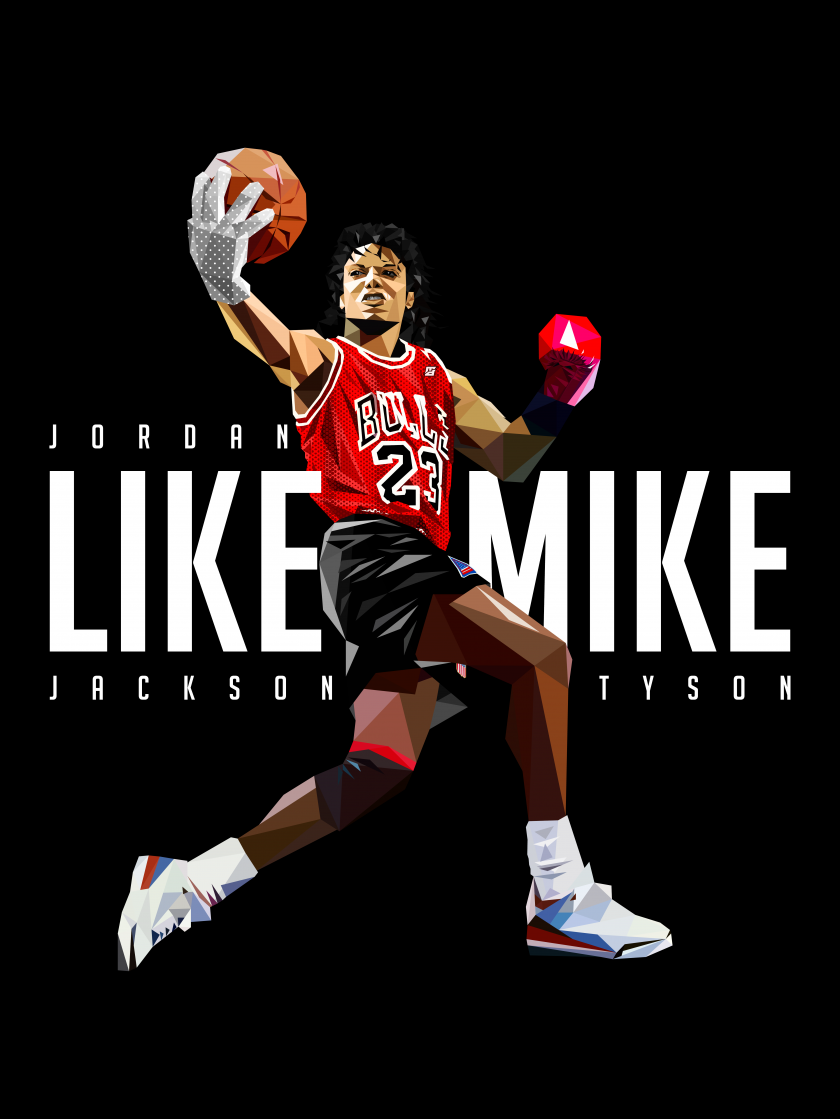 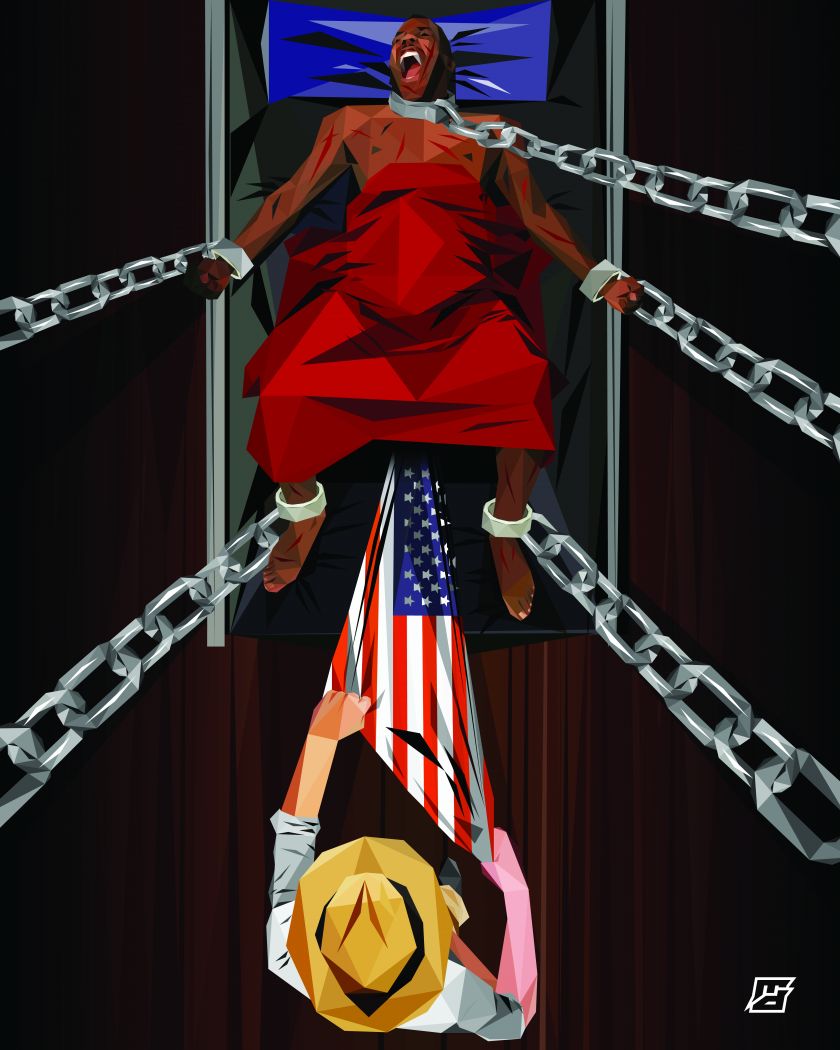 I have another favourite piece that’s very personal to me. I grew up in a single-parent household with my mom, and the only father figures I had were the ones on TV. So, I made a piece inspired by them: My TV Dads. I drew myself in the piece growing up with each show. It starts with me as a baby with Cliff Huxtable (Cosby Show) and James Evans (Good Times), then with Carl Winslow (Family Matters) with me as a kid, then Uncle Phil (Fresh Prince) and me as a high school student, and Michael Kyle (My Wife and Kids) and Julius Rock (Everybody Hates Chris) as an adult. I feel like many people connected with My TV Dads because the same characters helped raise them as well. It’s a great feeling when I make pieces that people connect with.

I also made a piece about the famous people from my city, Philadelphia, PA. It’s called Philly Family. It shows celebs like Will Smith, Kevin Hart and Meek Mill standing in front of the Philadelphia Art Museum together in unity. It’s my first major piece because it went viral in a crazy way. Will Smith gave me a shout-out, and it inspired many artists to make similar pieces. 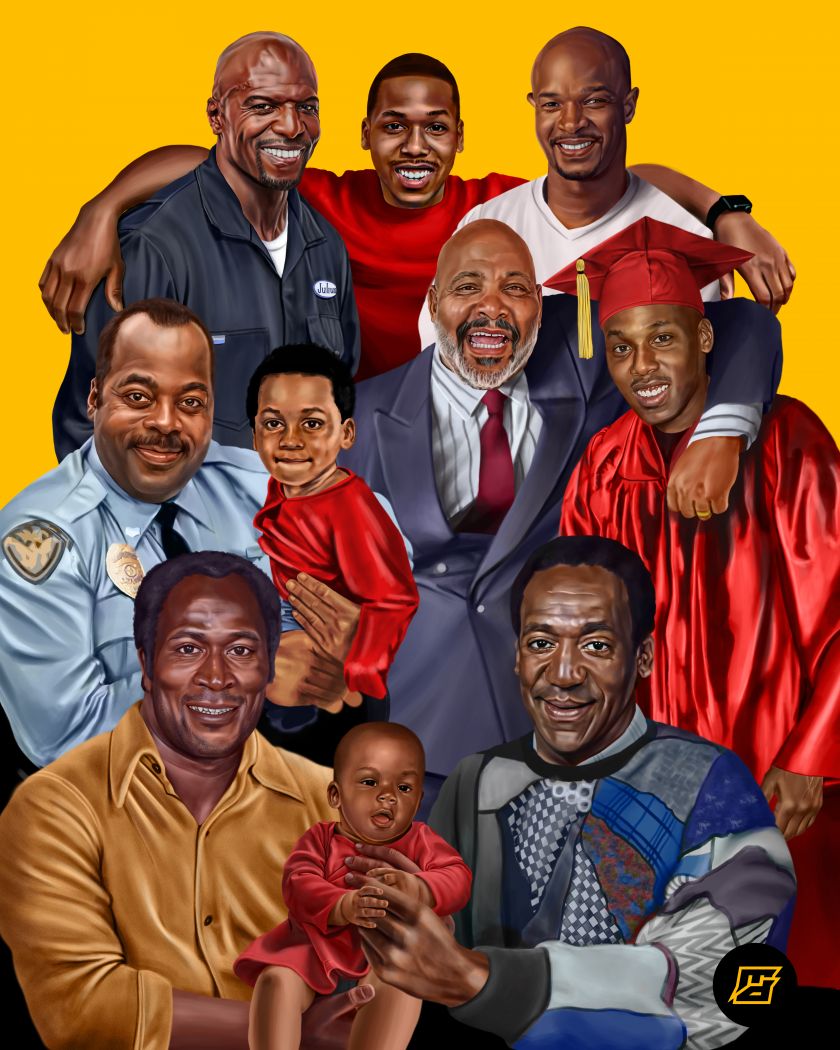 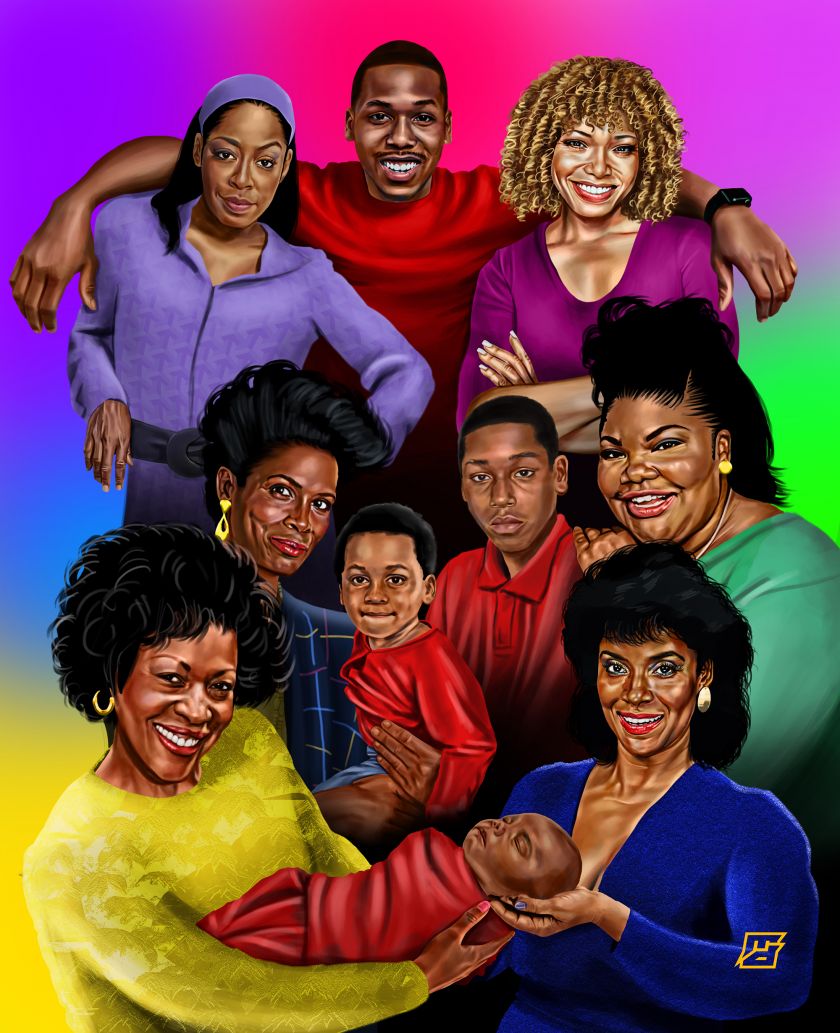 What’s the main goal behind your work?

I definitely try to aim for a certain response from my audience, but the type of response depends on the subject matter. There are times when I want people to be angry and upset because of another black male being gunned down by the police, so I would make a piece reflecting the circumstance. Then, there are times when I want my audience to laugh, so I would make a fun and witty piece. I just want my artwork to have substance. I want people to walk away with an experience.

I’m working on a piece right now that may get me banned from Instagram, but I’m willing to take a chance. It’ll be about police brutality and how it relates to the KKK. It’ll be something to catch before it’s removed. I have a bunch of other ideas I’m working on that may change the game. It’s just a matter of time. Definitely stay tuned. 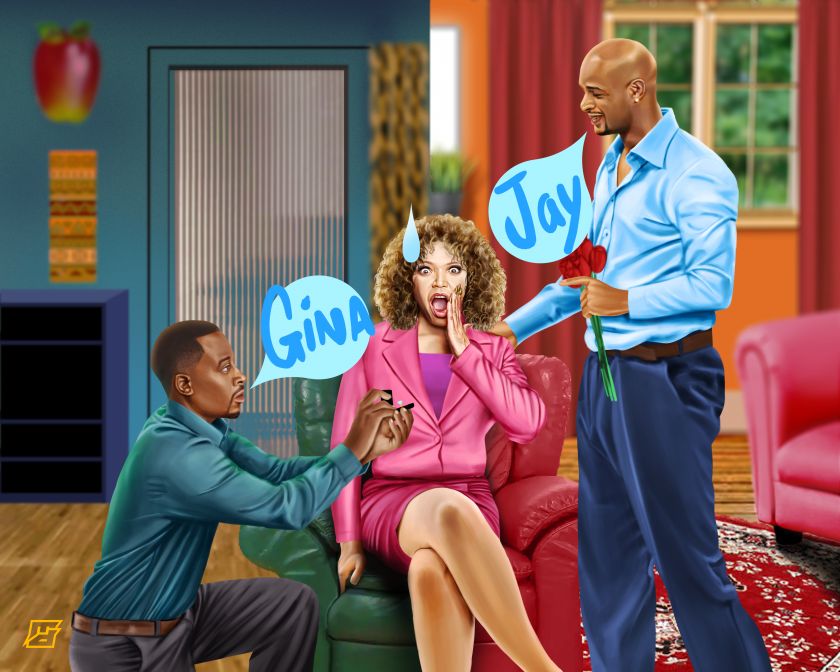