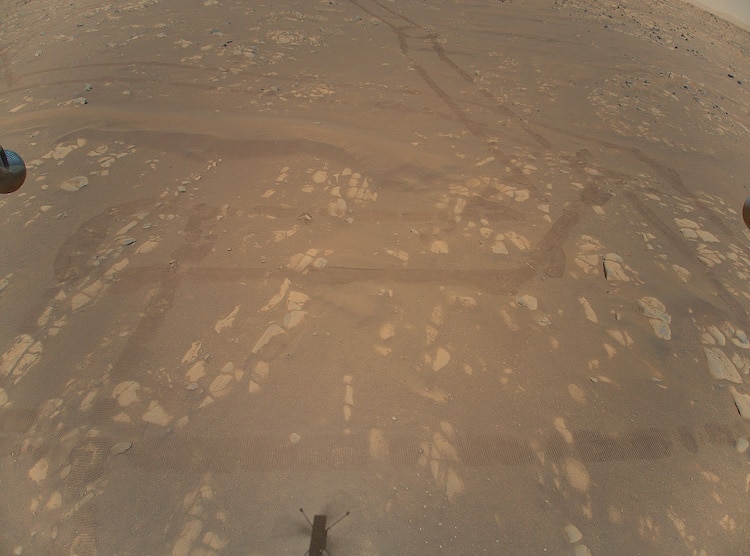 NASA’s Ingenuity helicopter is continuing to make history. Since its historic , Ingenuity has conducted two more flights and returned with some groundbreaking material. This includes the first color aerial ever of Mars, which shows just why it’s earned the nickname the Red Planet.

While color photographs of Mars have been around for a while, this is the first time we’ve had a birds-eye-view of the surface. The photo, which was captured during Ingenuity’s second flight, shows Mars’ dusty red surface and was taken at an altitude of about 17 feet. Clearly visible are the tracks of the , which carried Ingenuity along with it when it arrived on Mars in February.

Ingenuity’s shadow is visible in the bottom center of the photograph, while two of its four landing pads can be viewed on the right and left of the image. The helicopter’s high-resolution camera is mounted in its fuselage and, as flights progress, will surely send back even more images.

With Ingenuity continuing to set records on its flights, going faster and farther with each trip, it will be exciting to see what areas of the planet it can document. Already, Ingenuity is surpassing expectations by going at speeds and distances beyond what was tested on Earth. During its third flight on April 25, it flew about 164 feet downrange. This distance, which is about half the length of a football field, pushed Ingenuity’s limits. While in flight it also reached a record speed of 6.6 feet per second.

Encouraged by what they are seeing, Ingenuity’s team is instructing the helicopter to take even more color photos. Of course, Ingenuity isn’t only capable of color photographs. It also has a black and white navigation camera that tracks the surface below. Getting back good images is a balancing act—if the helicopter moves too fast, the flight algorithm can’t track the surface. Now that Ingenuity is going further afield, the team will need to adjust things as needed to get back clear, crisp data.

With Ingenuity’s fourth flight on the horizon in just a few days, the team is looking forward to seeing just how well the helicopter can continue to perform.