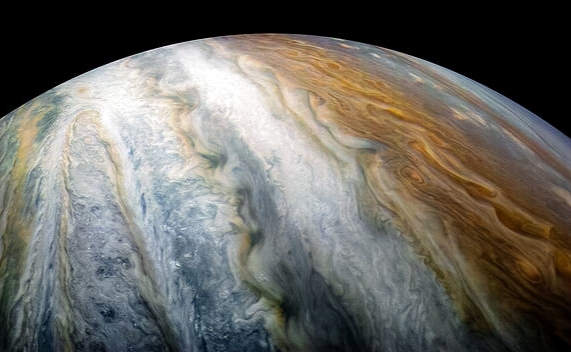 Buckle up for a wild flyby.

— the most distant probe orbiting another planet — made its 41st close swoop over Jupiter’s clouds in April. The space agency of the encounter with the swirling, Jovian atmosphere.

The animated GIF below shows a series of images captured by the 66-foot-long orbiter, which was created by the citizen scientist Andrea Luck. Juno came within 2,050 miles of Jupiter’s clouds while traveling at some 131,000 mph.

“By comparison, at closest approach Juno was more than 10 times closer to Jupiter than satellites in geosynchronous orbit [the location of some major U.S. weather satellites] are to Earth, traveling at a speed about five times faster than the Apollo missions did when they left Earth for the Moon,” NASA’s Jet Propulsion Laboratory .

Juno , on a mission to reveal the mysteries behind the largest planet in our solar system: What’s underneath Jupiter’s dazzling clouds? What’s Jupiter made of? How, exactly, did Jupiter form? The spacecraft’s cameras and instruments have already sleuthed Jupiter’s psychedelic atmosphere for nearly six years.

Europa is a fascinating world. “Scientists are almost certain that hidden beneath the icy surface of Europa is a salty-water ocean thought to contain twice as much water as Earth’s oceans combined,” . “Europa may be the most promising place in our solar system to find present-day environments suitable for some form of life beyond Earth,” the space agency added.