We all have that one friend who somehow manages to survive despite the contents of their fridge consisting of nothing more than a half-empty bottle of mustard and some Pizza Pockets. Well, turns out they’re not the only one with weird grocery shopping habits.

Recently, video producer Cut asked people from 24 different households to do $100 worth of grocery shopping, and shared the results which ended up varying greatly. And somehow your friend’s barren fridge doesn’t look so weird anymore.

Check out how differently people from various households spent their grocery money in the gallery below! 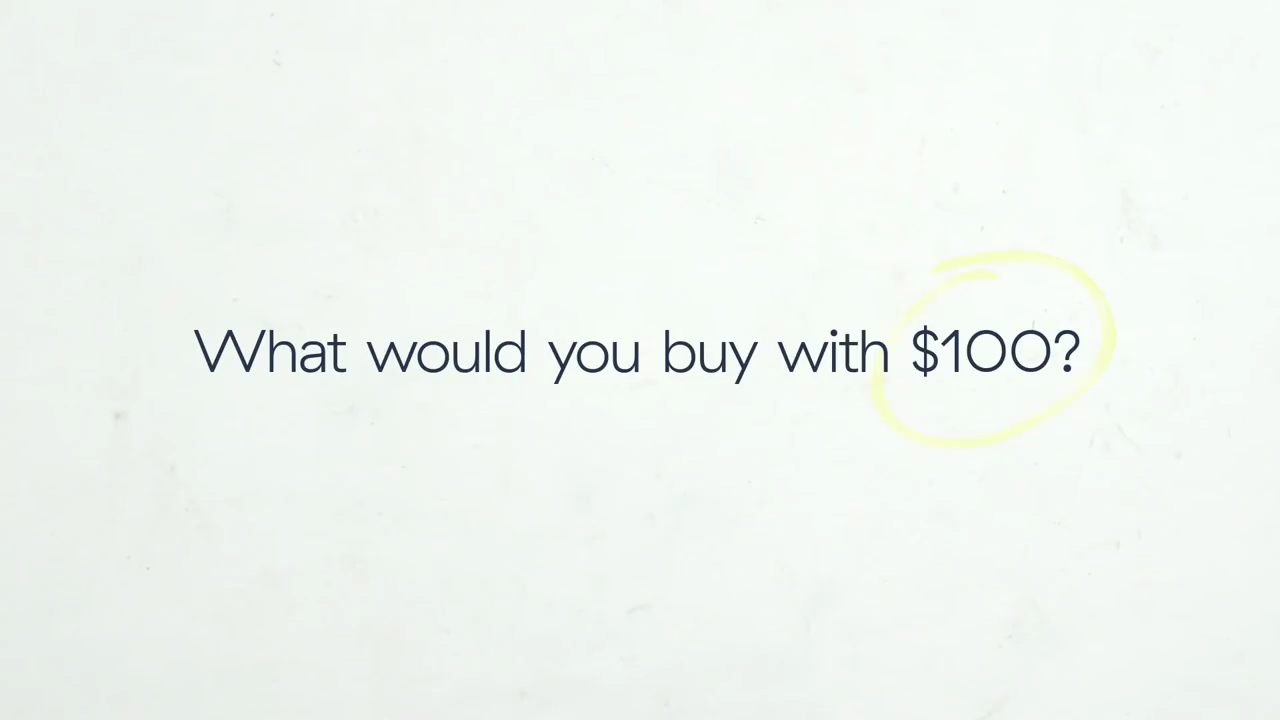 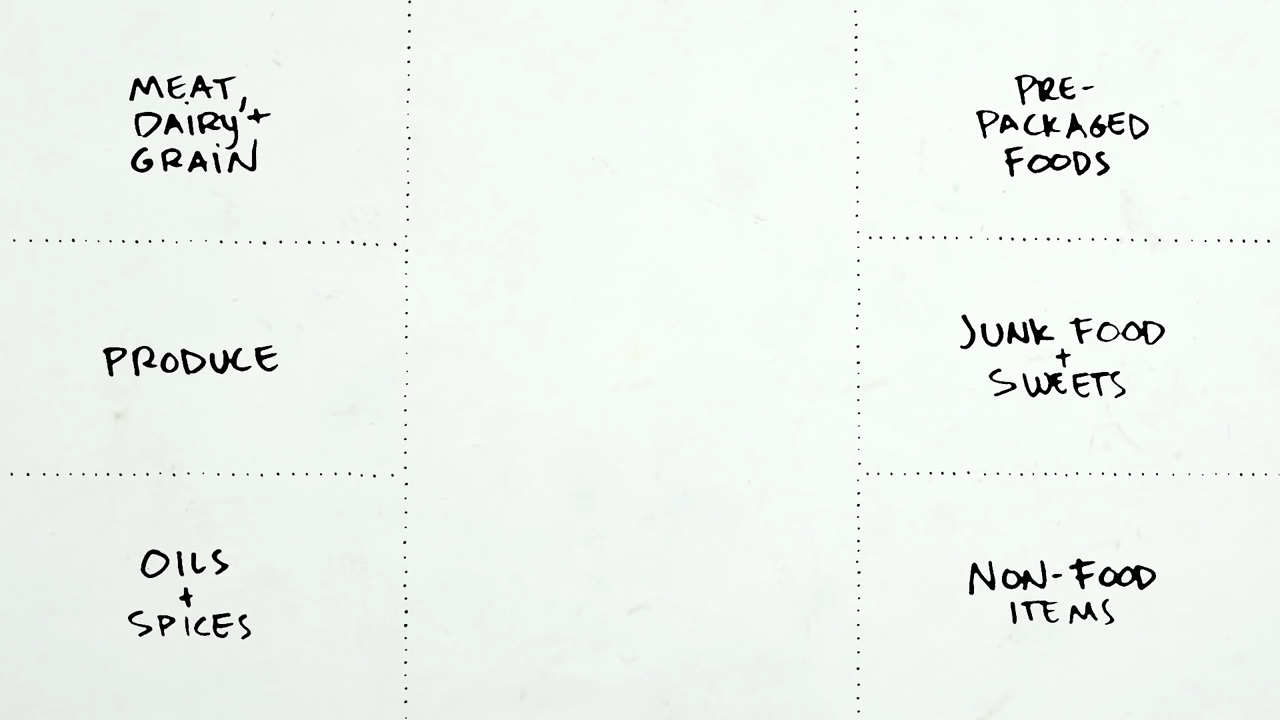 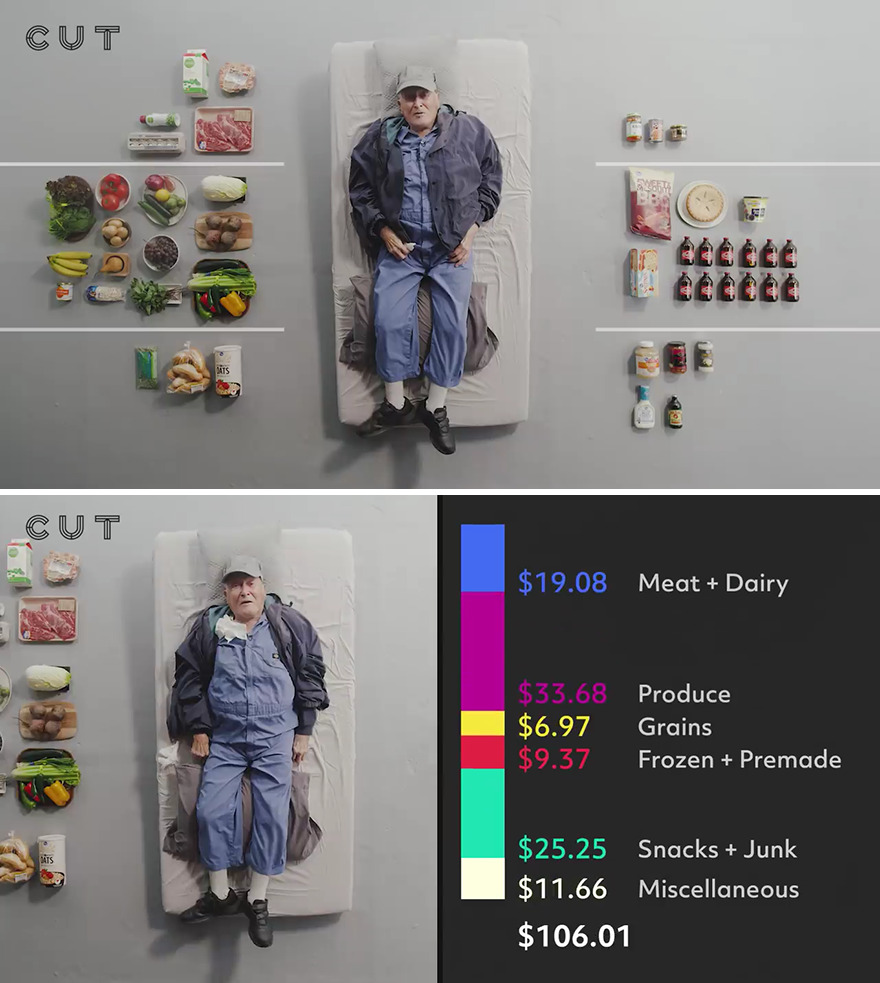 “I live in an apartment with my son-in-law and my daughter. I raise chickens.” 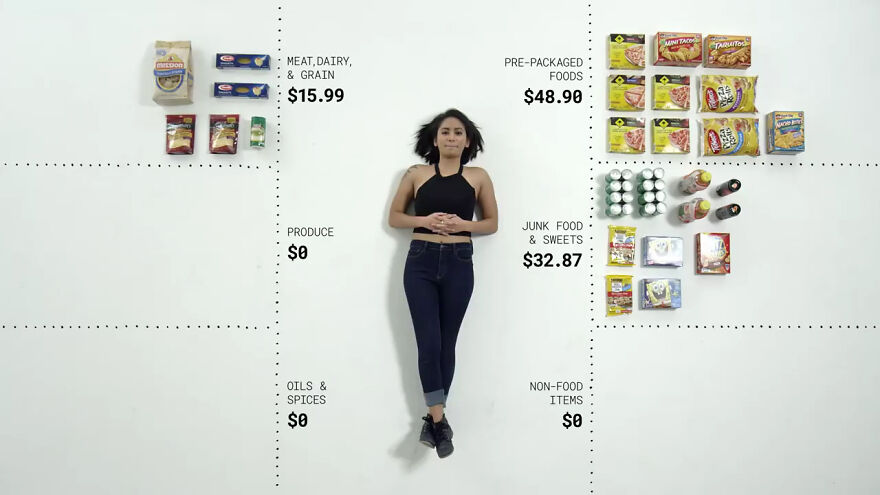 “I live on campus with three other girls.
Usually everyday I have pizza rolls. I don’t think I’m good with money at all.” 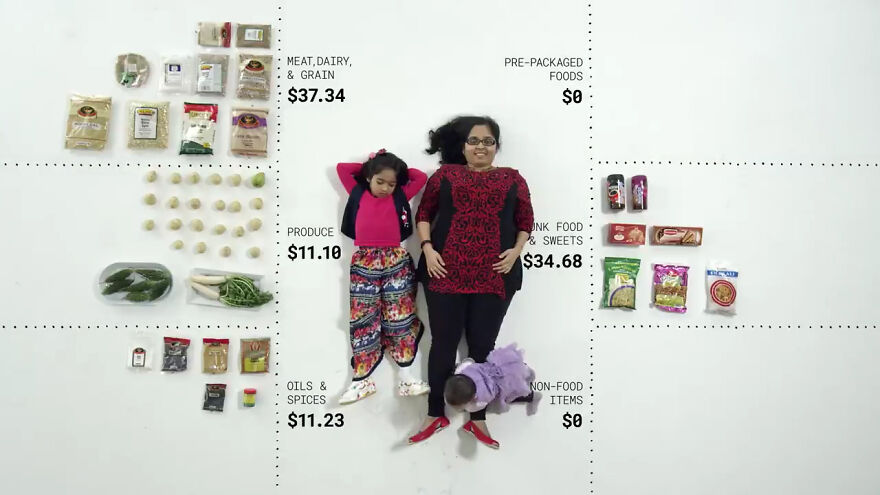 “I am married and I have two kids.
There are families back in India for whom [a 100 dollars] is like a monthly income” 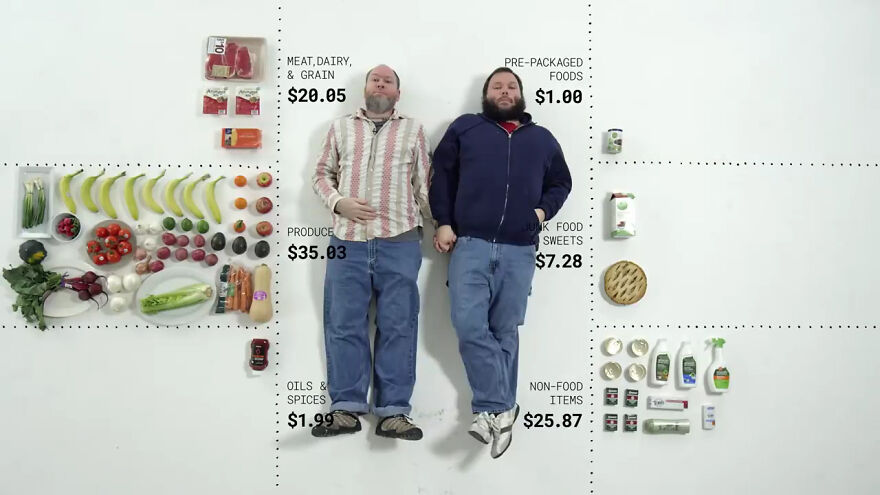 “We met online and it was love at first email.
Money means getting by. We’re unemployed, starving artists sort of thing.”

#5 “A Hundred Dollars Means Food For A Week” 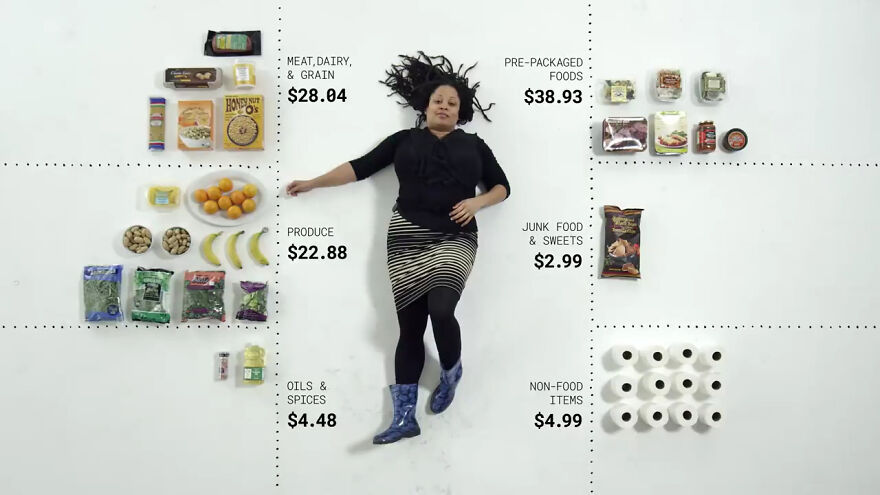 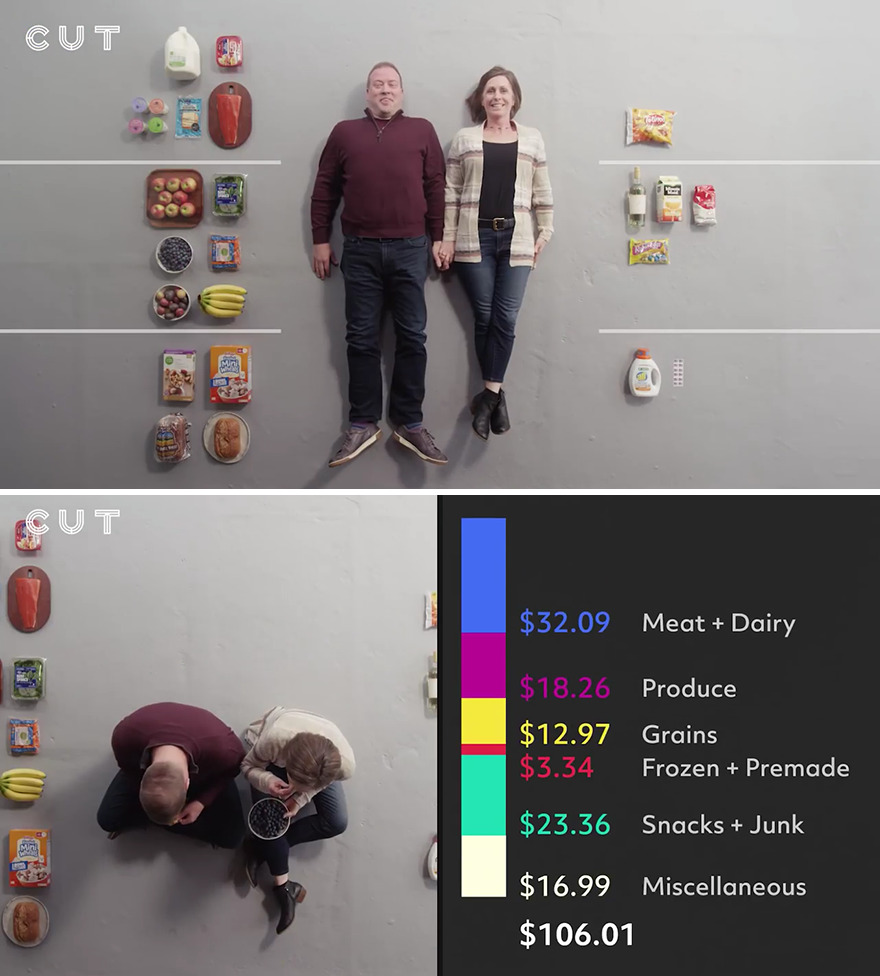 “We’ve got three kids, a dog and a boat.
We love to gather around food and celebrate our family and friends.” 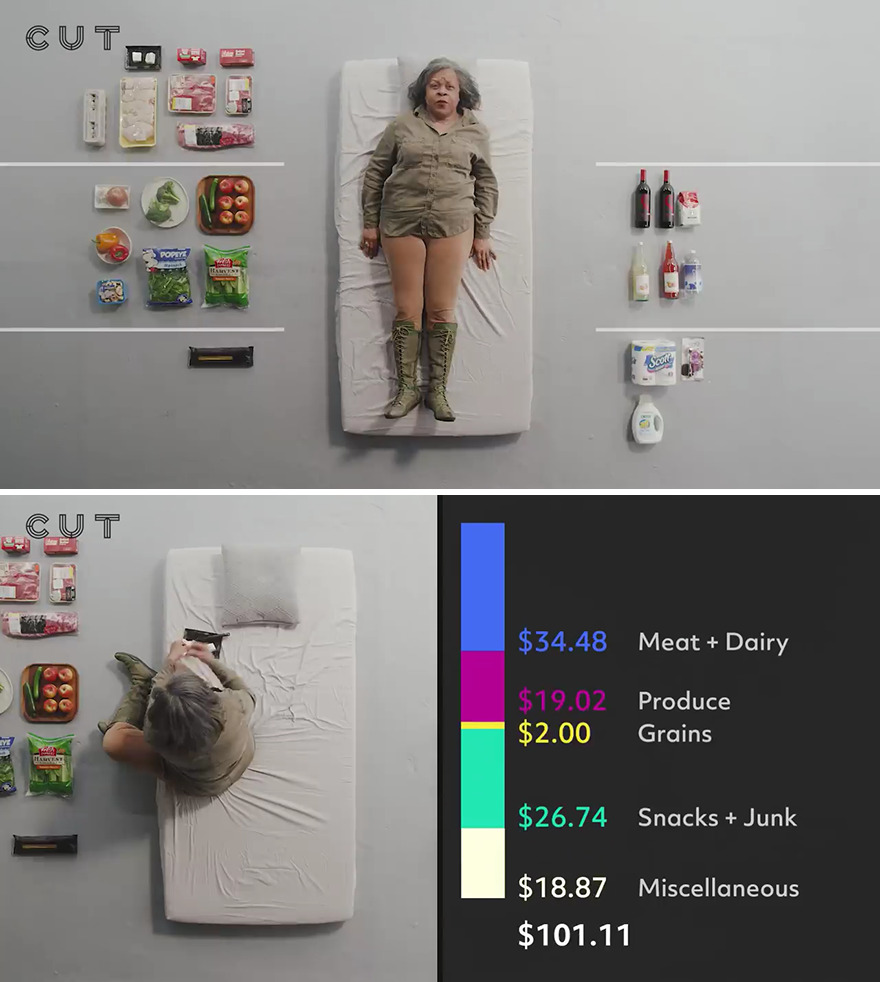 “[Food] is a communication. It’s making people happy.
I live by myself. Unless I’m meeting friends somewhere, I eat alone, probably watching TV.”

#8 “I Collect Social Security. Not Near Enough, By The Way” 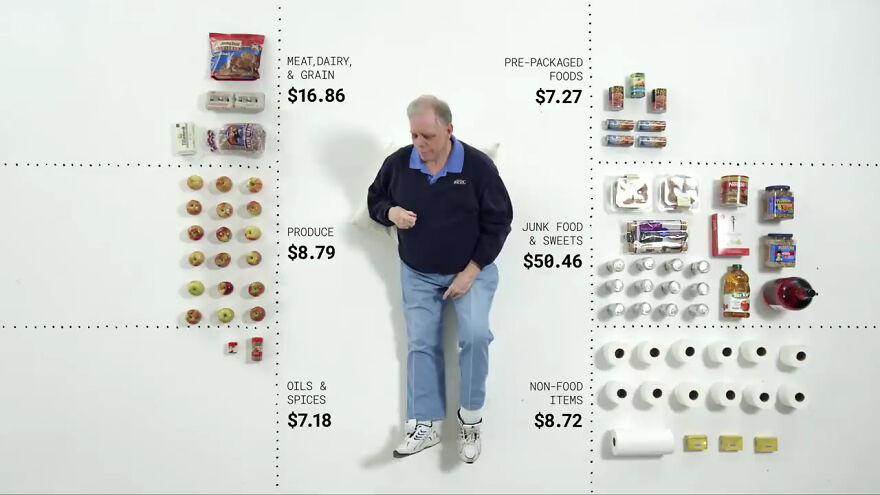 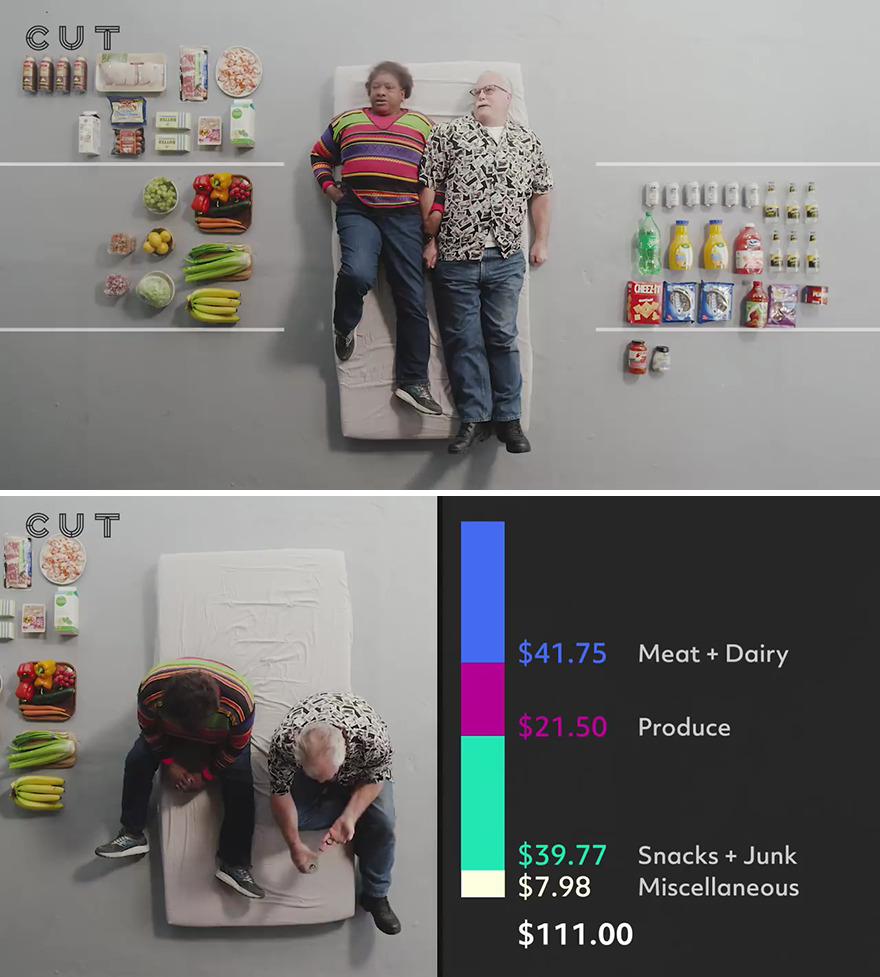 “I don’t necessarily like his style of cooking. One time he made me Vietnamese Norvegian gambo.” 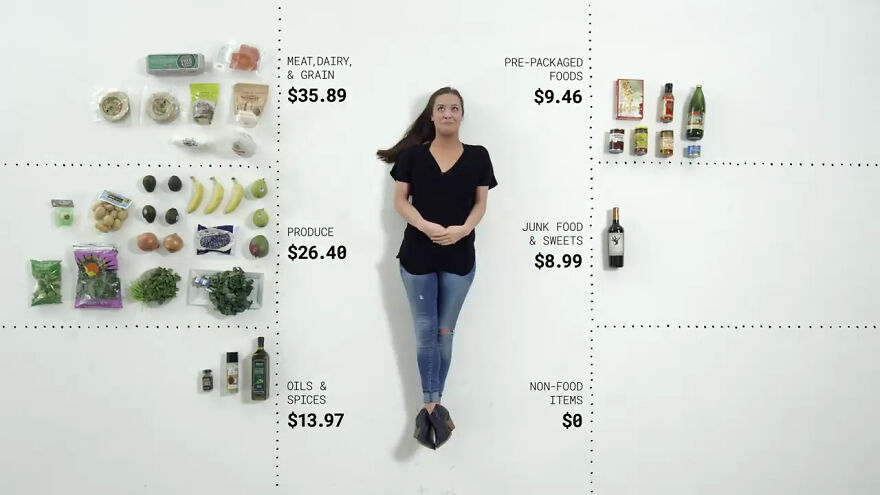 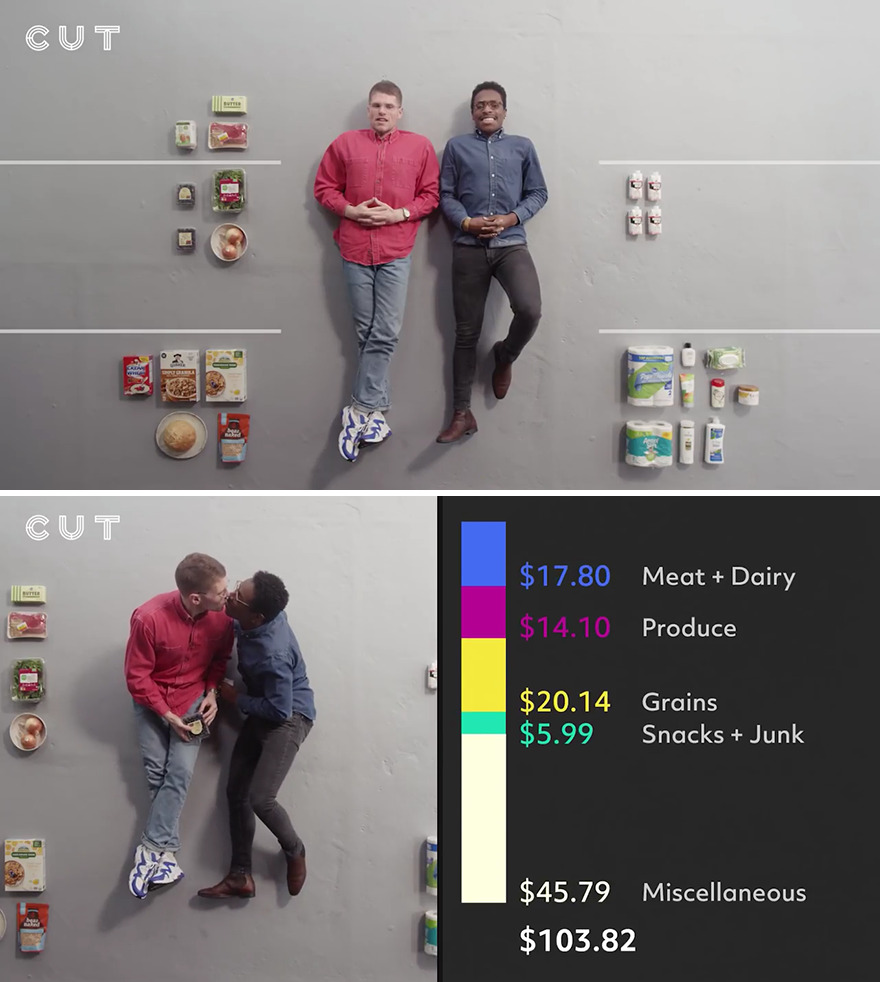 “We love cereal.
I kind of see food as fuel, nothing more.” 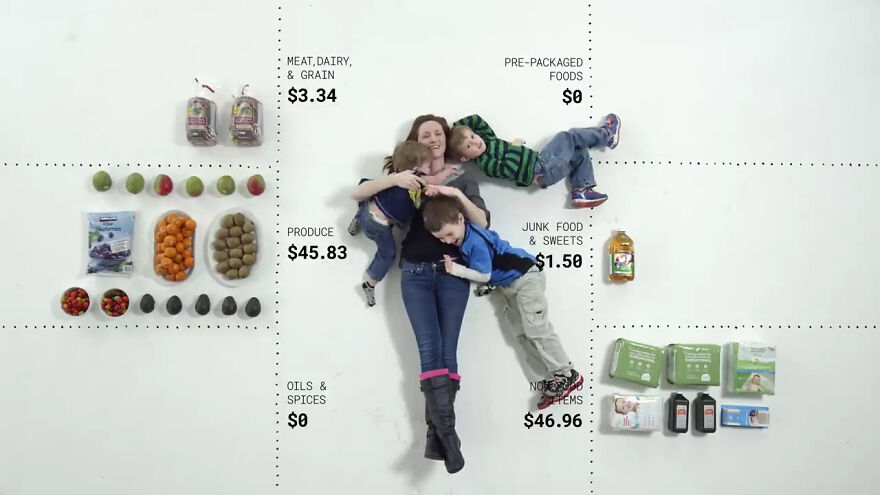 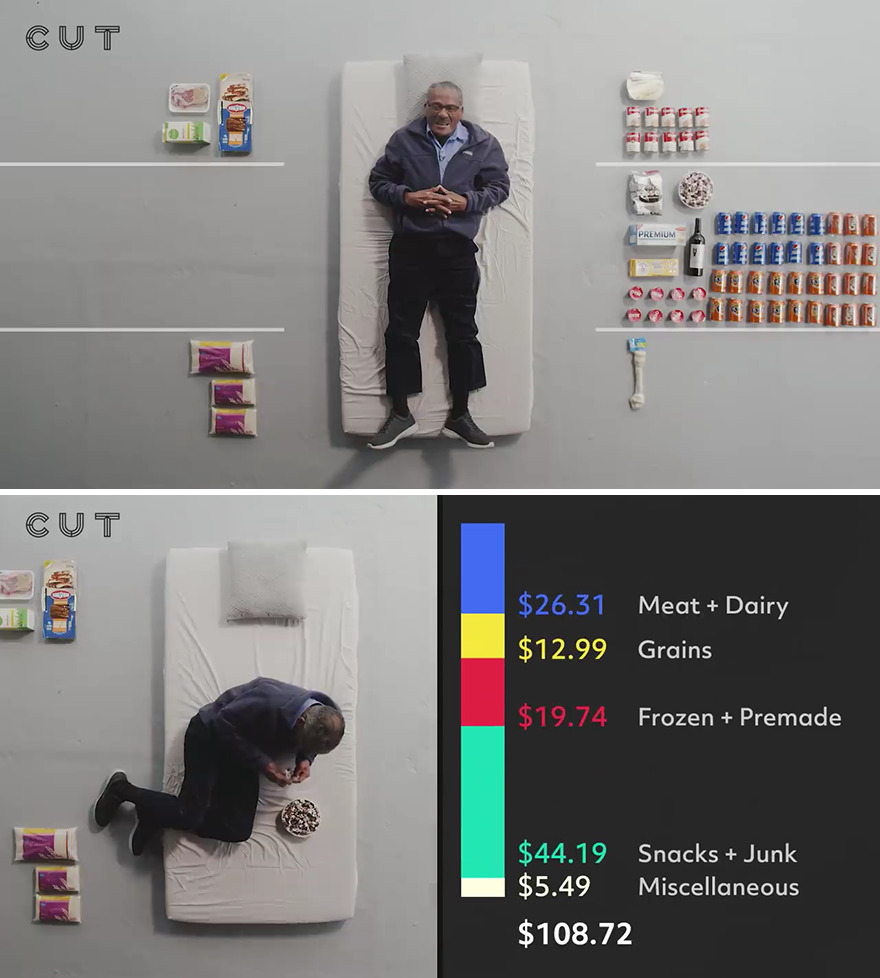 “Food is sustenance. I used to [cook], I used to love to do it, all that’s gone because I can’t see.”

#14 “My Name’s Gertrude. I Go To Restaurants A Lot For Company” 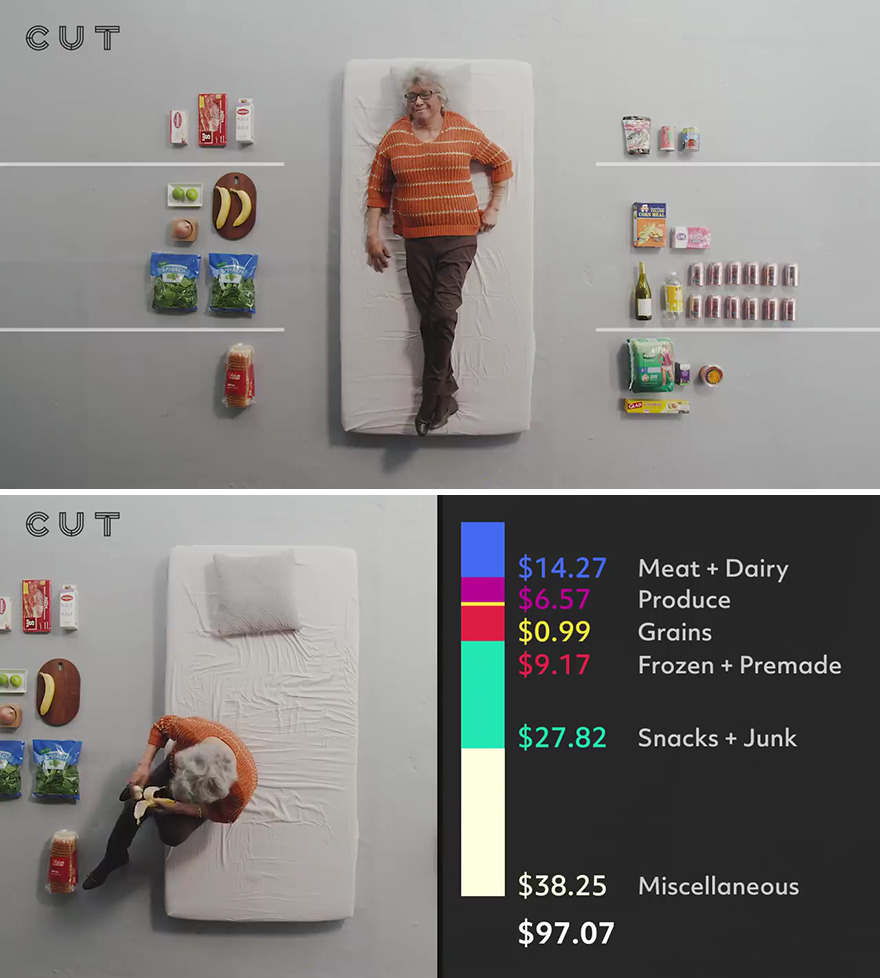 “Food means nourishment, especially since being older, [it has been] very important to eat the right things.” 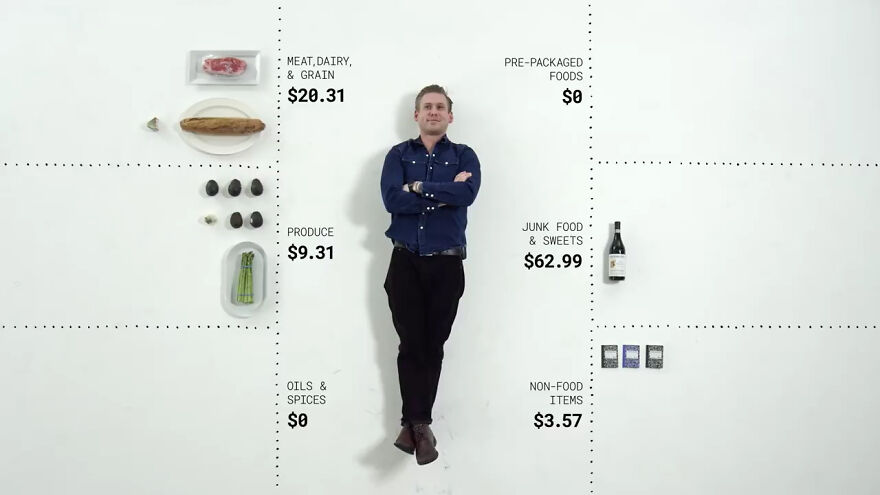 “I would say I’m really striving to be middle class, but I don’t know if I am quite yet.
A hundred bucks means like a couple of days worth of money or one frivolous night of indulgence.
I would say I drink at least six days a week.”

#16 “Oreos And Energy Drinks… I Have To Have That” 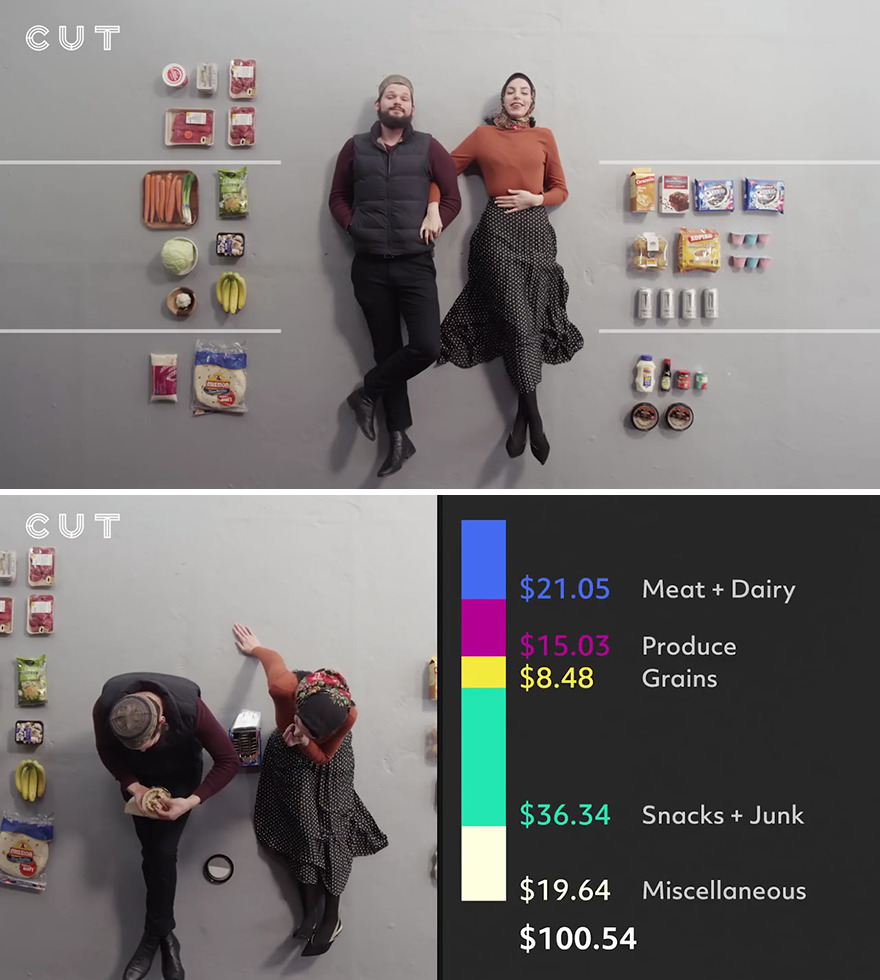 “I would say food is just a medium for community, family.” 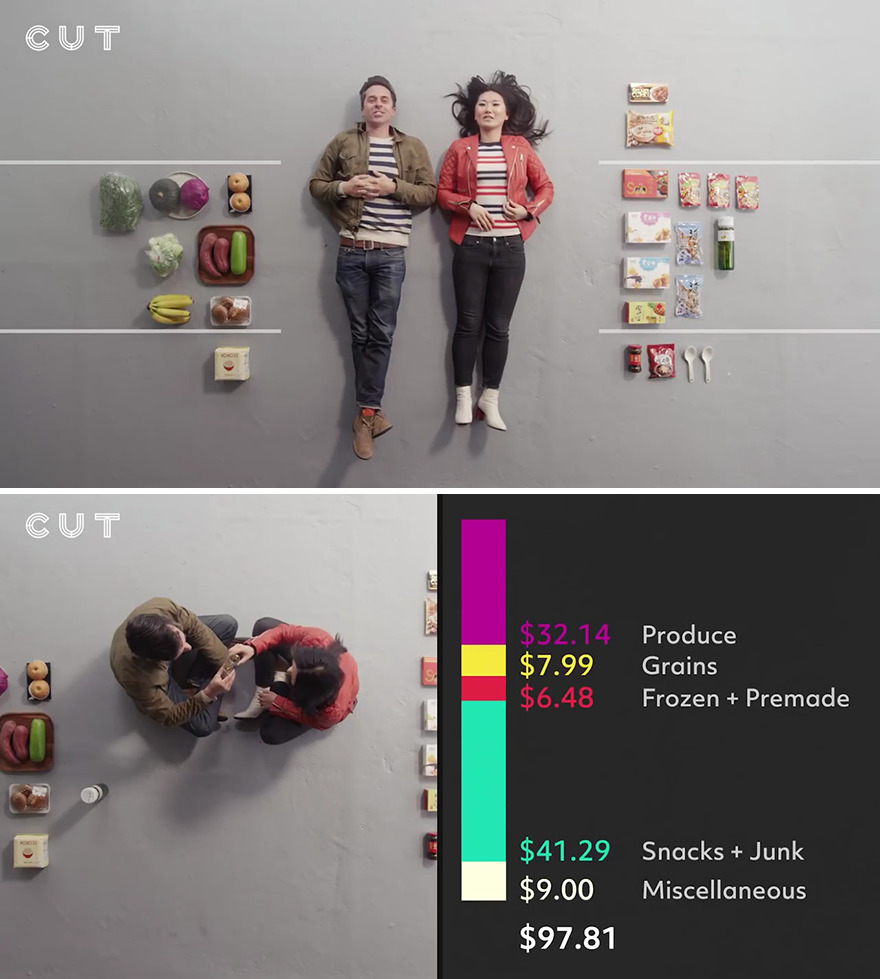 “We try to have dinner together, at least the nights we’re at home at the same time. We don’t watch TV while eating” 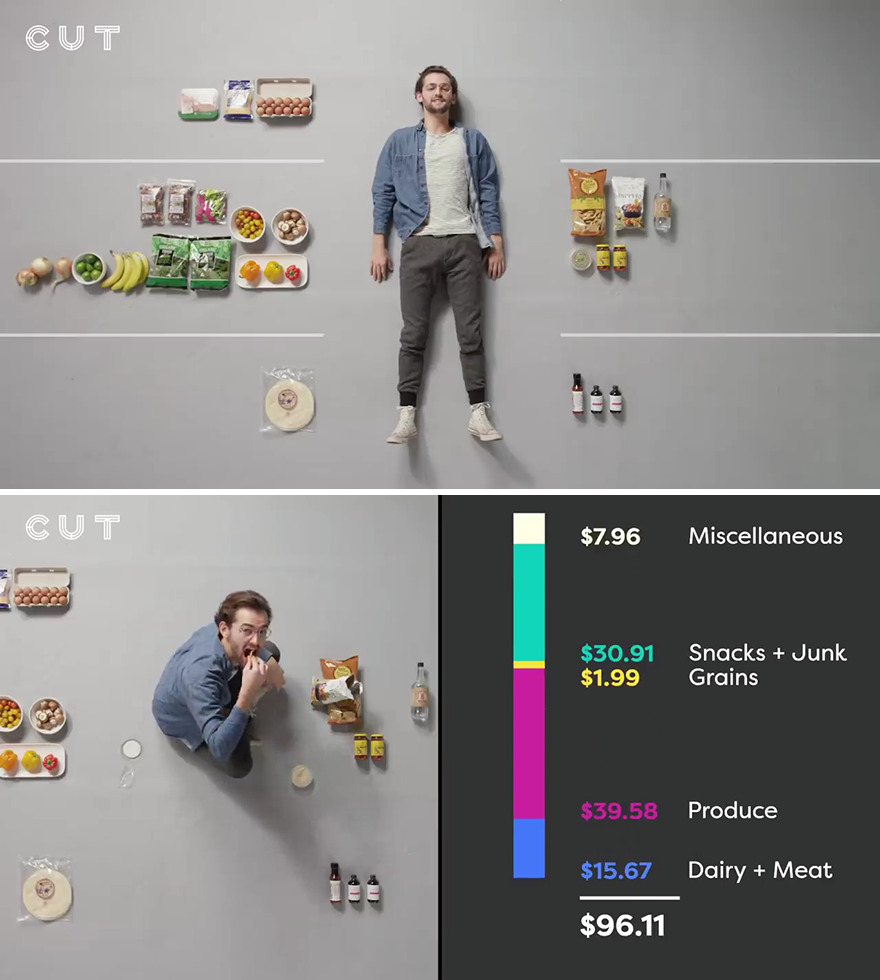 “I like to cook fresh food so I got greens. I get UberEats and stuff sometimes. I spend about $150-200 per month on it.” 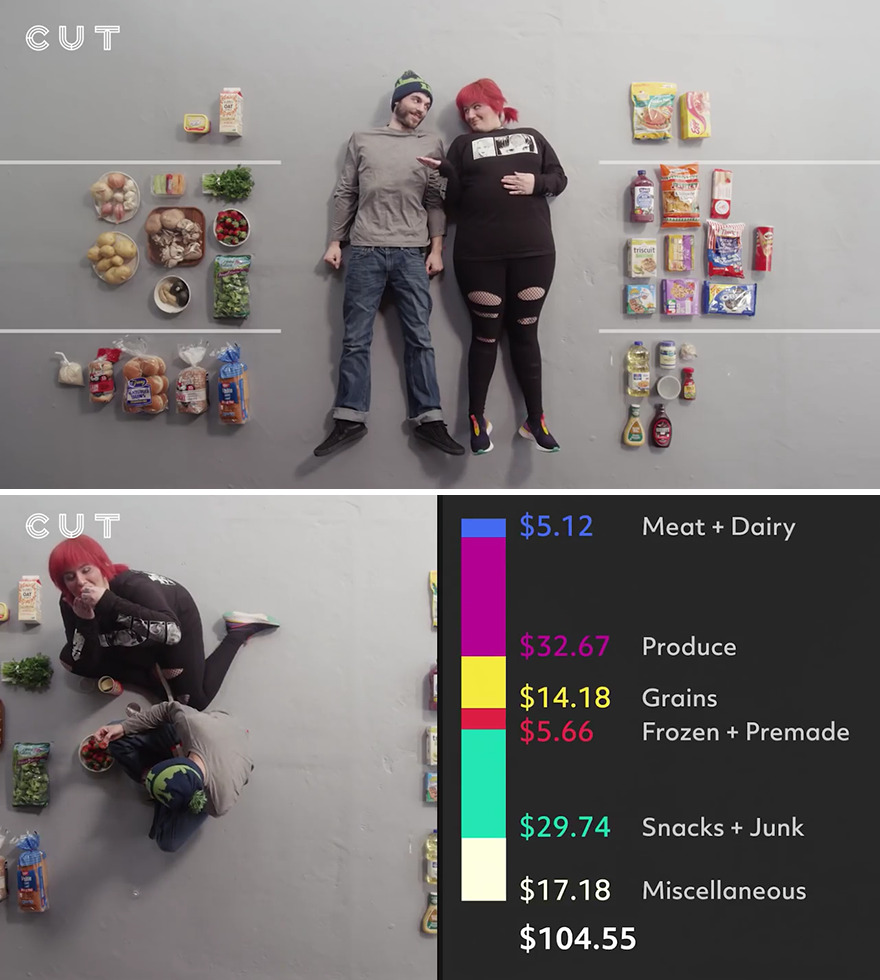 “When you have a child and you have to make ends meet, you could go to the cheapest store and $100 barely stretched.” 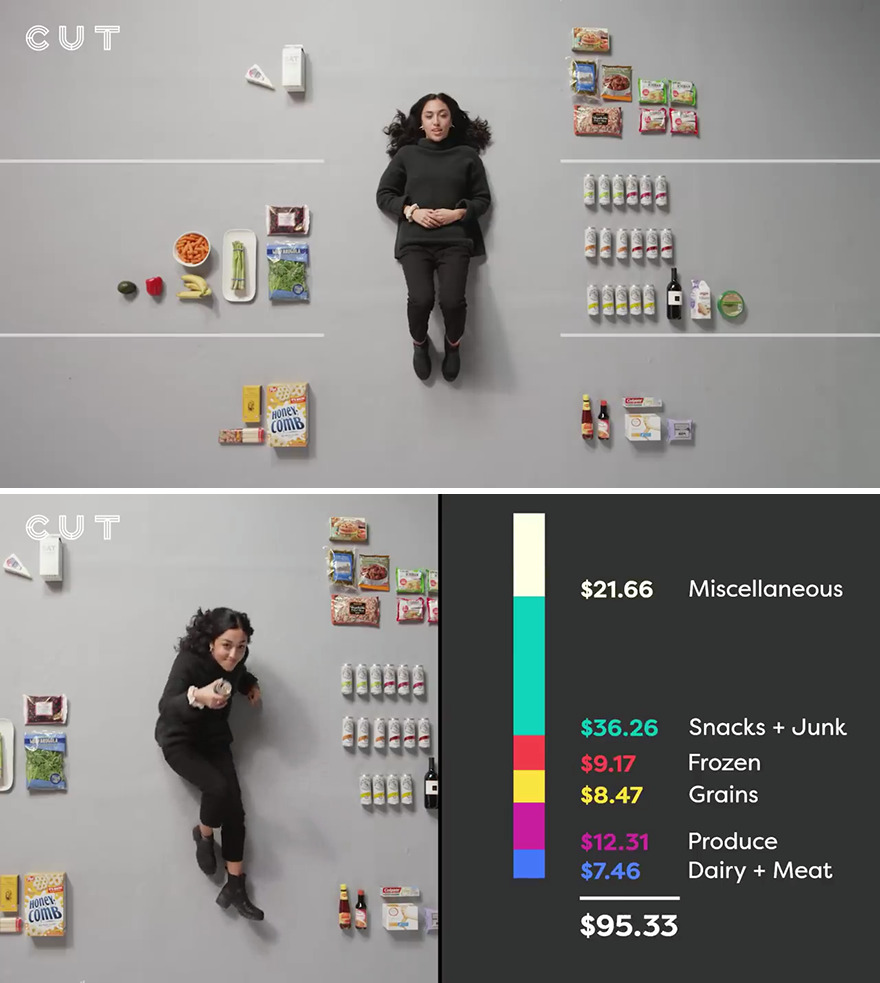 “Usually I spend about $50 on groceries. I don’t come from a family that has a lot of money. So that kinda sucks when everyone else is going out to eat and you just have to stay home to save money.” 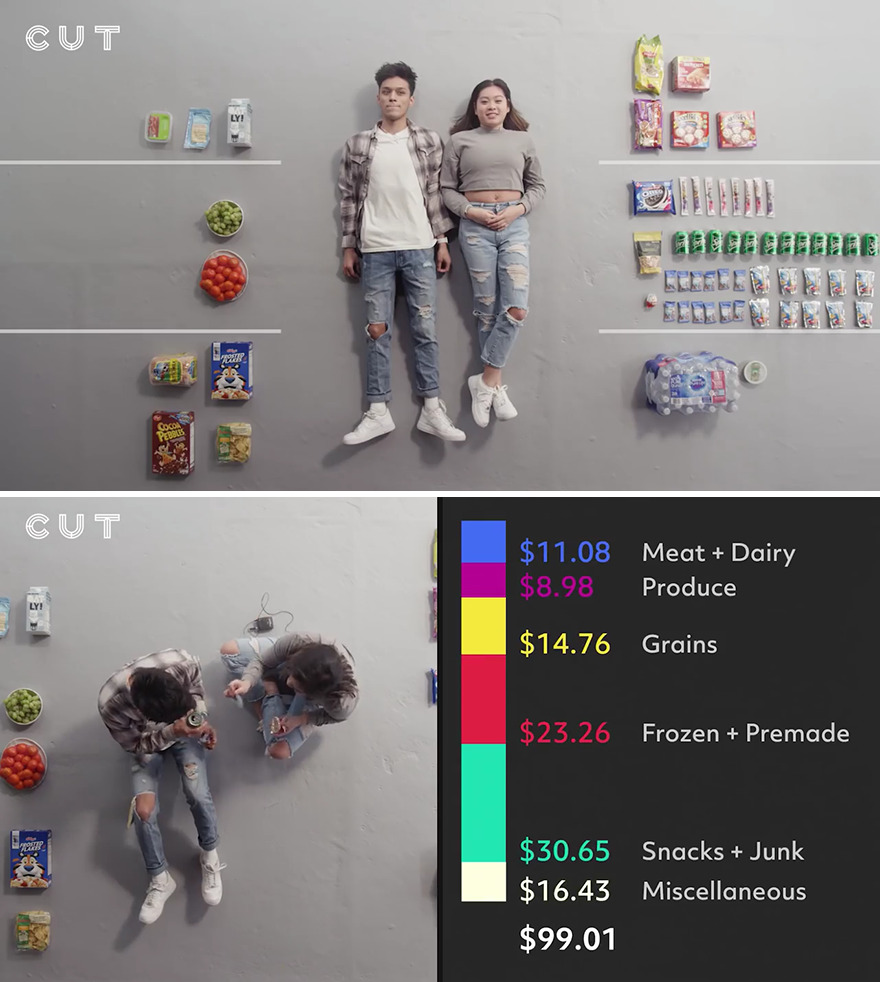 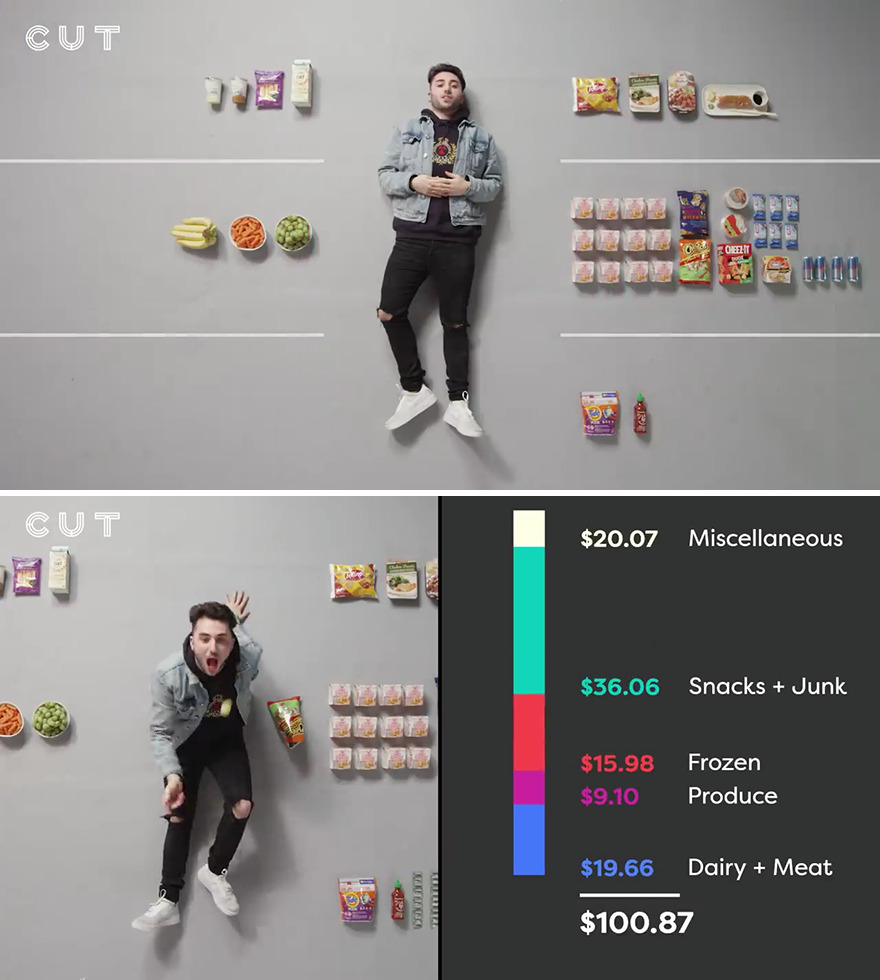 “My room consists of a mini fridge and a toaster oven to cook pizza rolls.”

#23 “I’m Trying To Be An Actor. I’m Going To College Because My Parents Require That” 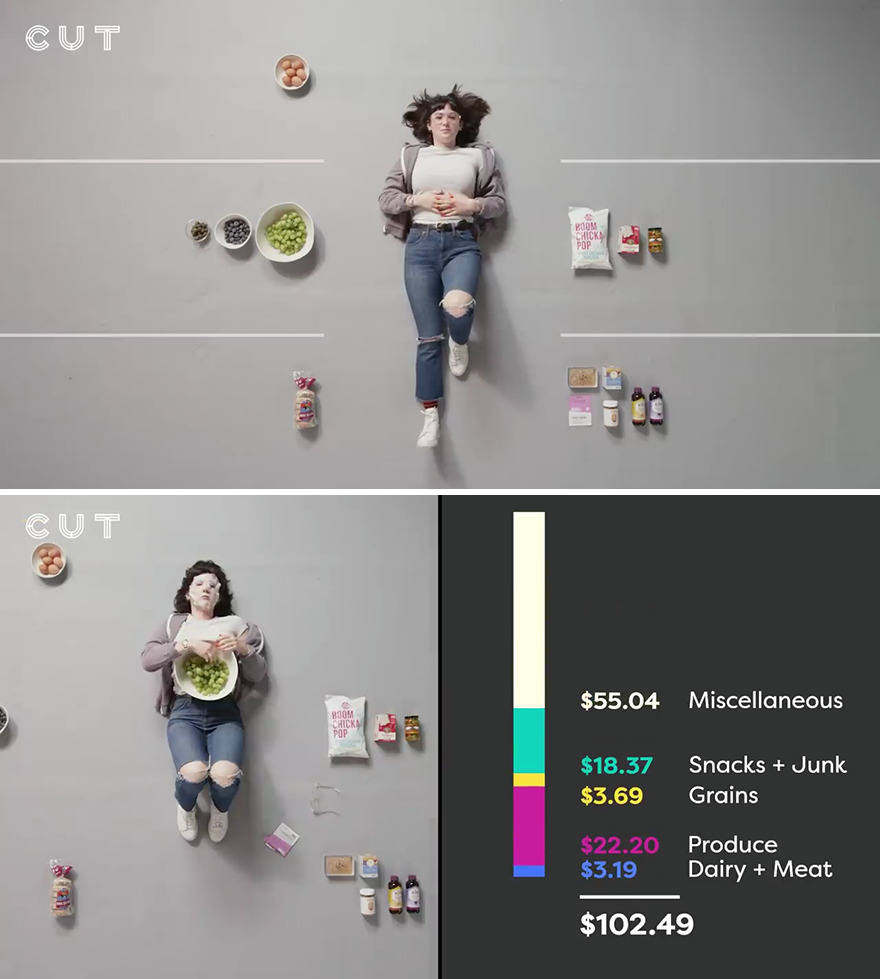 “I just buy little snacks that I can add to my school day.
I spent a quarter of my budget on honeycomb. I love honeycomb.
I don’t cook. I eat out almost every day” 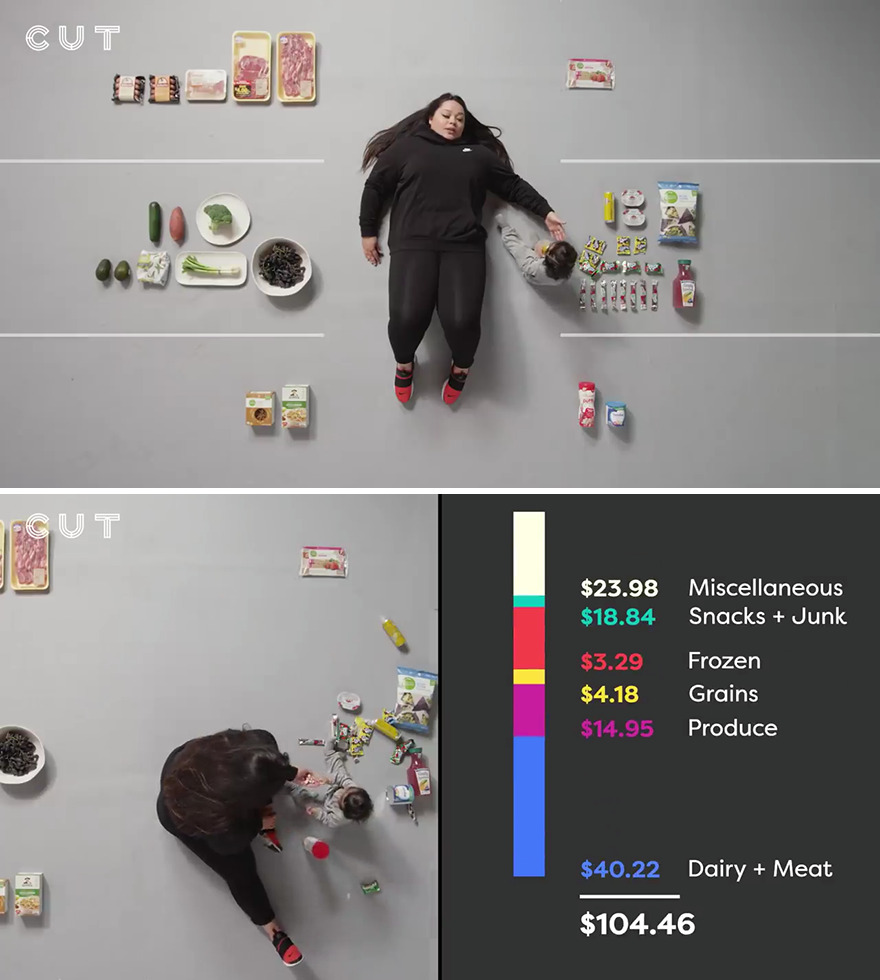 “I spent about a quarter of the $100 on baby formula. I always cook dinner for me, my boyfriend and my daughter”

Check out the videos below!