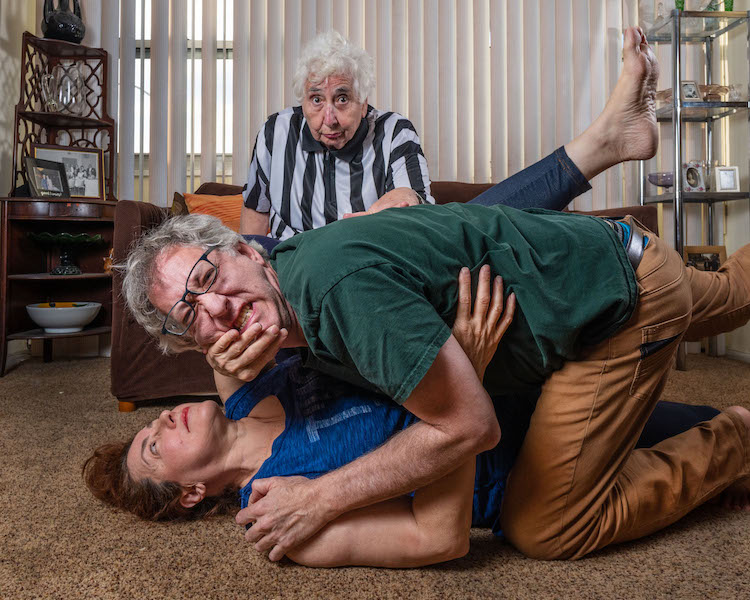 The pandemic has brought together people who, not wanting to be alone, have chosen to unite in quarantine. Those who haven’t lived with each other in decades have suddenly been thrust into this type of always-together housing situation. Photographer is one person experiencing the phenomenon in the comfort of his compact two-bedroom, one-bathroom apartment in Queens, New York. For nearly a year, his ex-wife and mother have been living with him—for better or worse. To chronicle this strange time, Kramer has taken photos that are humorous reenactments of real-life situations that have happened called Quarantine in Queens. The images are relatable for anyone who feels like they’ve been cooped up for too long with loved ones.

So, how did this quarantine crew form in the first place? It was kismet, of sorts. Kramer’s mom usually heads to Florida for the winter, but her plans fell through so she had asked to stay with him. At the same time, his ex-wife (who lived in California) had her apartment destroyed by a leaky roof and had also asked to crash with Kramer. What was supposed to be a few weeks has turned into a year.

“Before the pandemic, I mostly shot street photography, but when I found myself hunkered down at home with my mother and ex-wife, I felt the need to document it,” Kramer explains to My Modern Met. “At first I wanted to shoot our experience journalistically, but we were all so busy doing things like scrubbing down our groceries with Lysol that it wasn’t working, so I decided we would take our real experiences and recreate them the next day in a photo. Most of them started coming out rather humorous, which I think was a coping mechanism. The photographs became a way to process our anxiety, almost like self-therapy.” 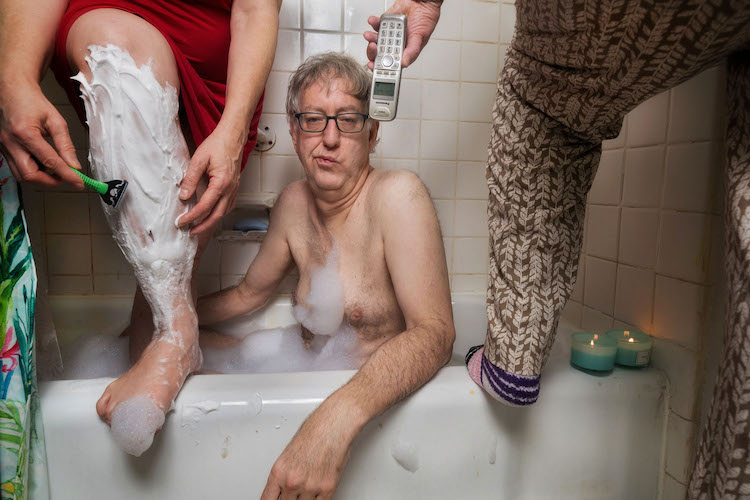 Day 26: A Facebook friend recommended a gentle bubble bath as a great way to relieve stress during a lockdown in my one bathroom apartment in Queens. Not sure the plan worked.

The day-to-day grind can feel monotonous, but Kramer’s series has proven a nice way to break up the tedium. Living together, however, hasn’t been without its challenges needing resolve. “At first, my mother and ex-wife were happy to participate, being familiar with my weird artsy personality. But as the project took off on Instagram, they both became a little more self-conscious. We had quite a number of discussions whether we should portray ourselves as we looked during a pandemic, which is usually not our best, or actually comb our hair.”

The two women turned out to be great collaborators. “I really owe this project to my mother and Sophia, who were great sports, although sometimes I had to bribe them with donuts or promise to wash the dishes for a week. I embraced collaboration more than I ever did before. We looked at the photos from each shoot together, and they had a say on what would be published or not.”

Living in a small New York City apartment has its share of logistical challenges when snapping photographs. The space is dark which requires Kramer to use speed lights and a wide-angle lens in order to get everyone in the frame. And then there’s the actual shooting of the image. “Sometimes, the behind-the-scenes was more dramatic than the actual results,” he shares. “One of the most popular photos involved me in a bathtub while my mother and ex-wife interrupted me. We laugh now that it became a popular photo because the shooting of it was the worst experience. We were trapped in a tiny bathroom along with a tripod in front of us, a light stand in the corner, the laptop sitting precariously on the toilet, and my mother freaking out that the light would fall into the bathtub filled with water and electrocute us. We took maybe four shots and then called it a day.”

Art is imitating life, and Kramer’s more recent photographs reflect the fatigue we’re all feeling from COVID-19. “After 10 months, we have noticed that many of the more photos have taken on a more serious tone,” he shares. “Like everyone, we are exhausted from the pandemic. We’ll continue on until we all have the vaccine, and then figure out the next step.”

Photographer Neil Kramer humorously chronicles quarantine with his ex-wife and mother in the series Quarantine in Queens. 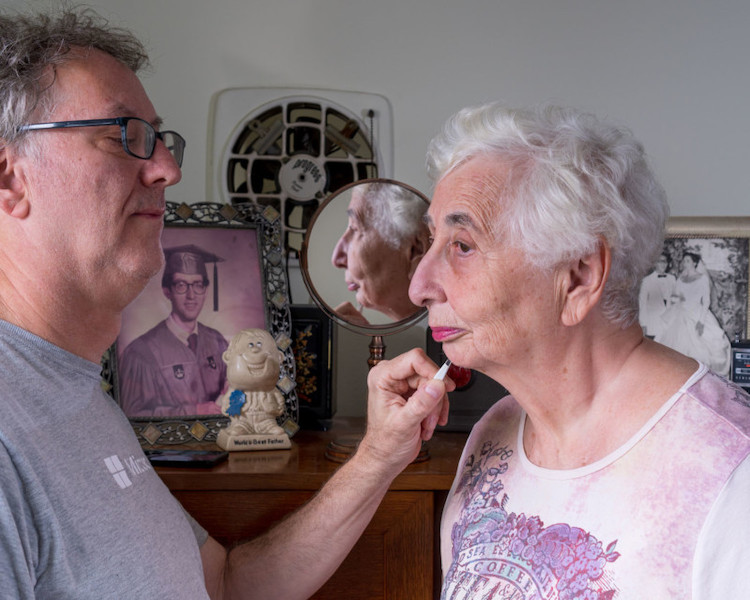 Day 18: Unexpected Family Closeness. We all were looking terrible, so we decided to help each other look presentable in case we have to FaceTime with someone. 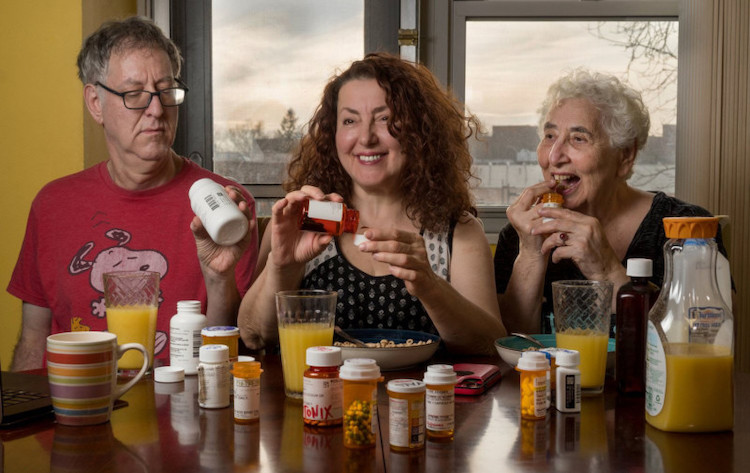 Day 22: The family that self-medicates together, stays together. 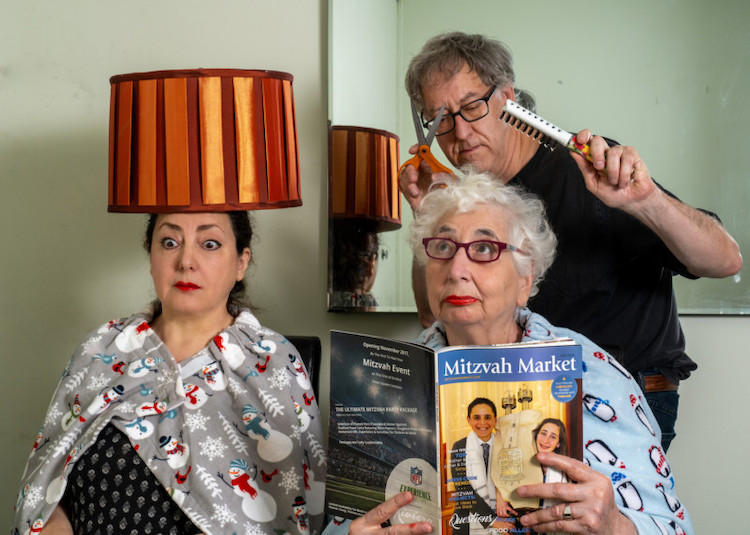 Day 55: May 5. Need a haircut? The Quarantine Salon is now open. By appointment only. 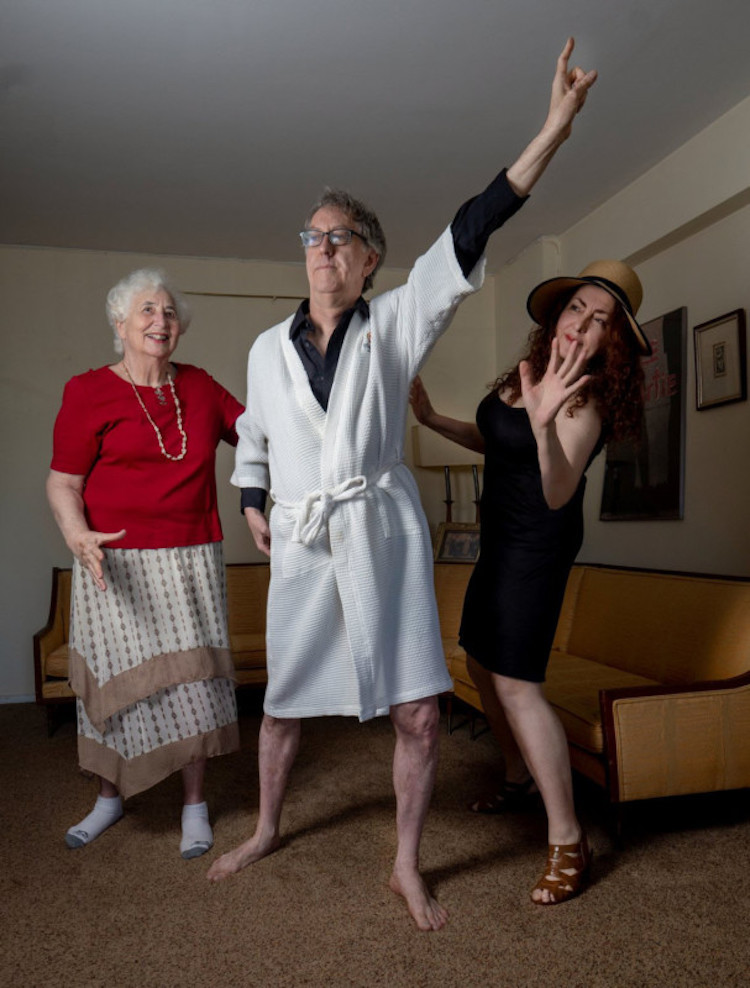 Day 61: “We need to exercise,” I said. We need to move around. We need to dance for our mental health.” I put a disco radio station on Pandora. “Stayin’ Alive” from ‘Saturday Night Fever’ was on. 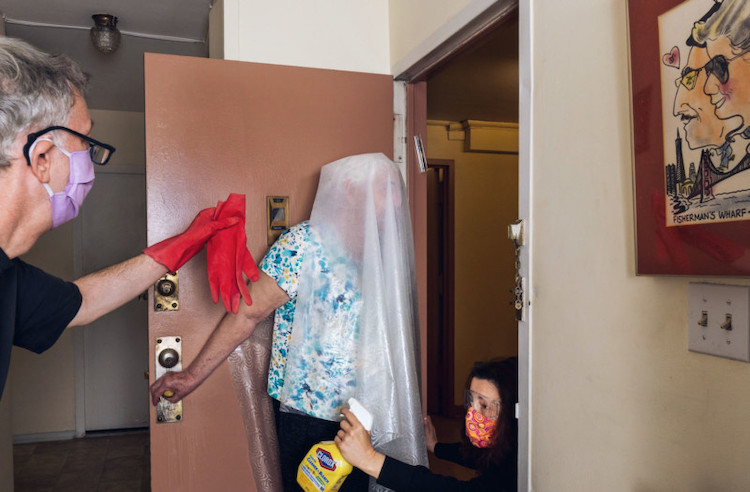 Day 70: We told my mother that if she goes out by herself, she has to wear a mask, gloves, and goggles to protect her eyes. “Why don’t you just wrap me in the shower curtain?” my mother asked, sarcastically. 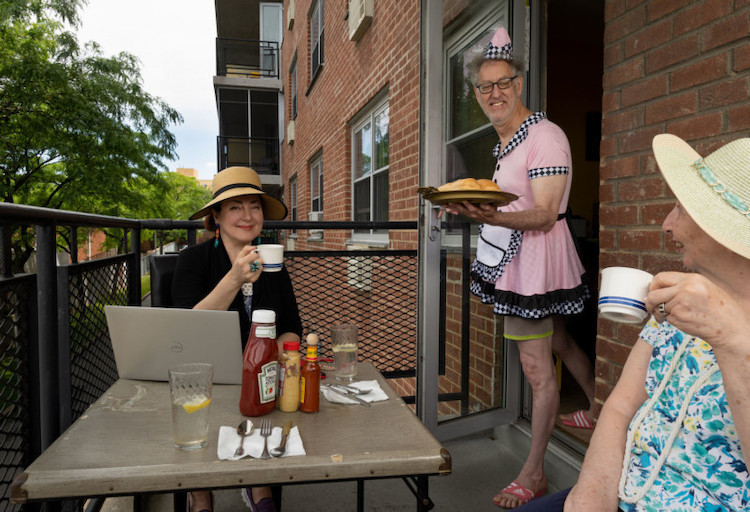 Day 85: Mother was depressed at not being able to go to the Blue Bay Diner because of her high-risk status. So, Sophia decided to create a diner on our balcony! 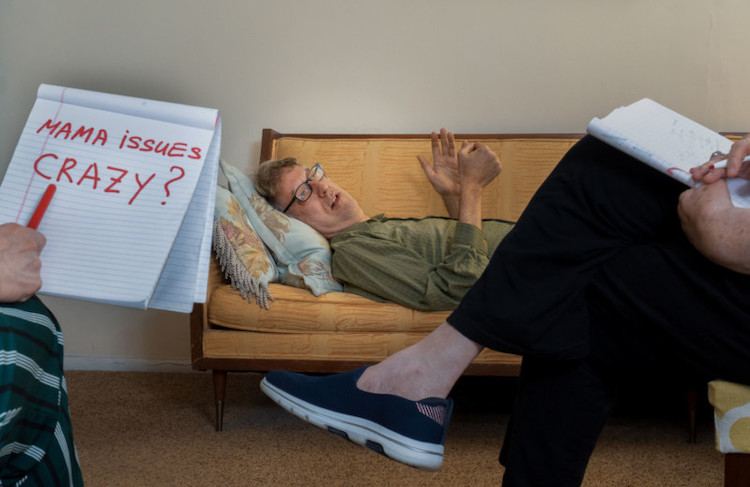 Day 130: Yesterday, I signed up for a free text therapy session that is offered by New York City. I’m not sure how much it helped me, but it was nice chatting with an anonymous stranger. Today, I tried a new approach. “Is there anyone who knows me better than my own family? Why not just talk with them as my therapists rather than a stranger? 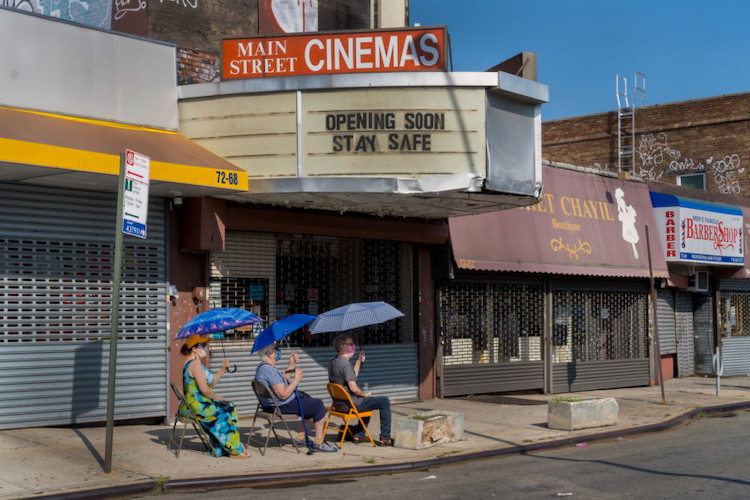 Day 133: When we saw our local movie theater’s marquee promising they were “opening soon,” we set up shop to be the first in line. And so, we’re waiting… 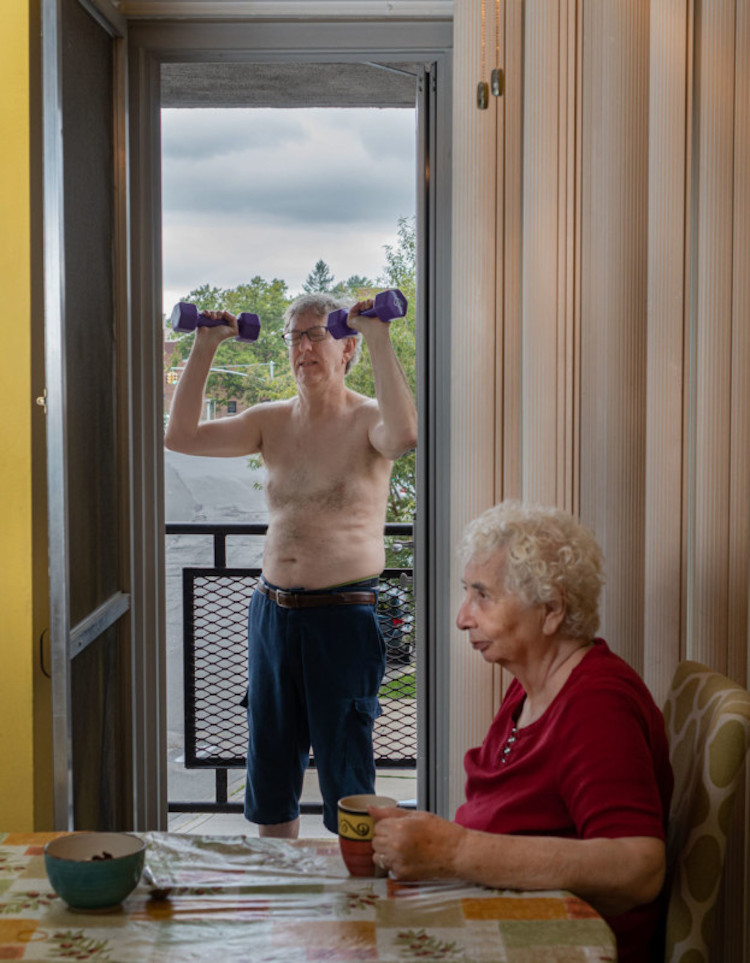 Day 150: After getting positive reviews of my legs in a photo I showed on social media, I decided it was time to improve the upper half of my body. But as much as I tried to get attention from the women in the house, they were more interested in watching Outlander on TV. 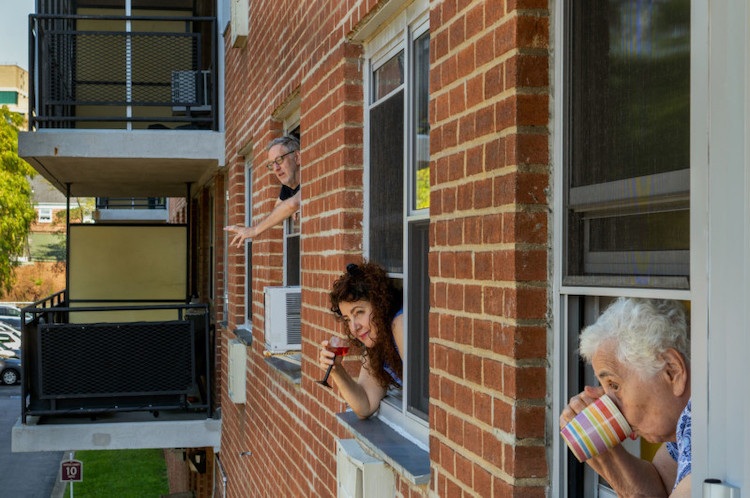 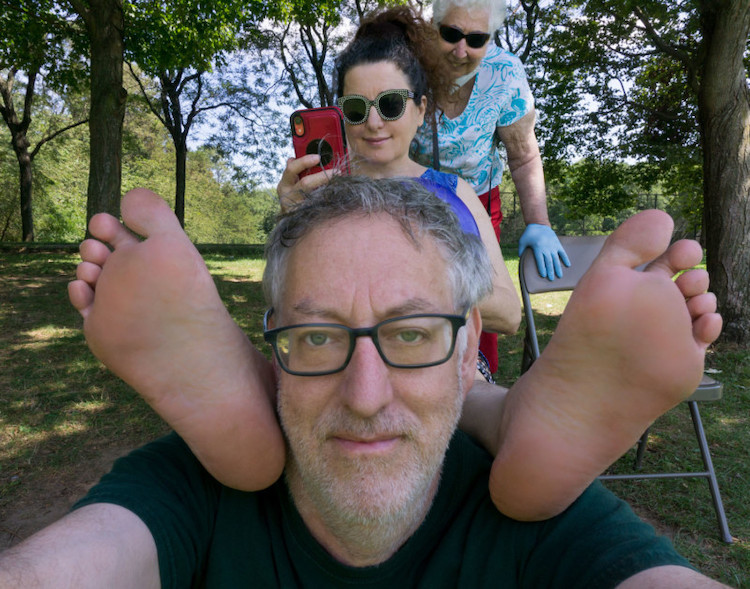 Day 177: We are in the park in Queens, Sophia’s feet on my shoulders, my mom hovering behind, only my mother’s blue glove reminding us of the danger still around us. 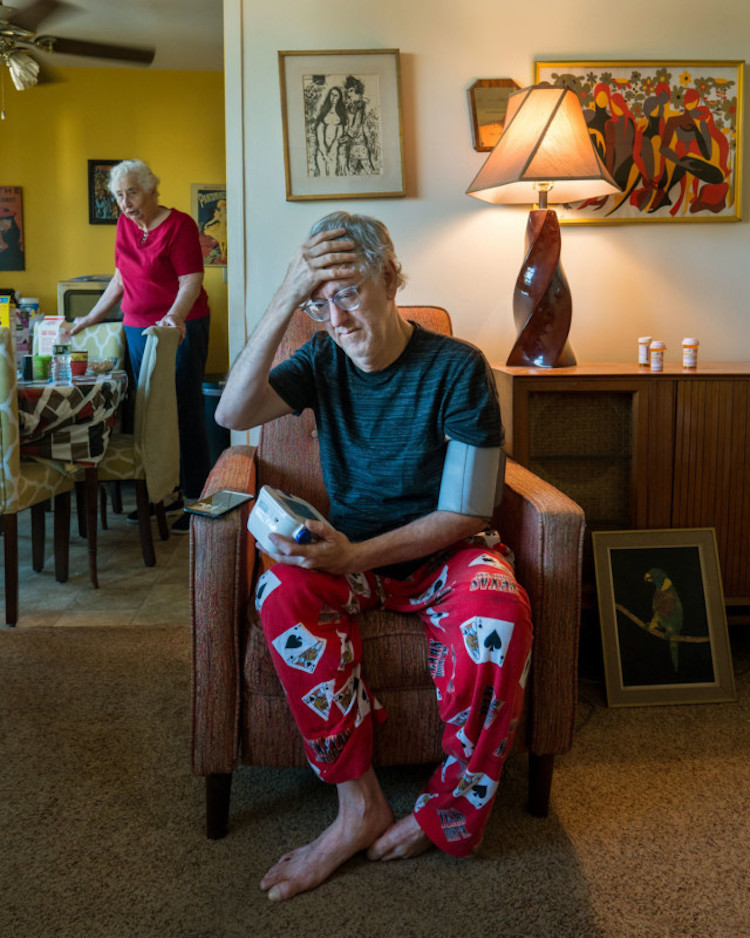 Day 231: The morning after election day. Sophia and I were up all night, even though we were watching the election results from separate rooms because we were making each other too anxious. 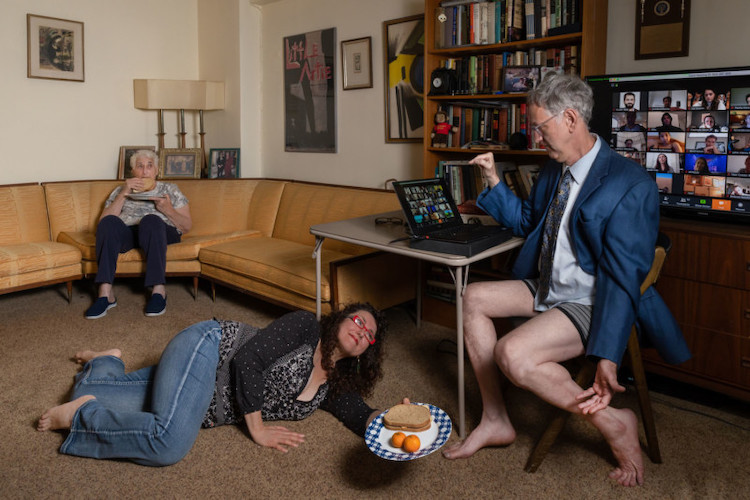 Day 239: Nov 12. Zoom conferences are convenient as you only have to dress above the waist. Here is Sophia crawling on the floor, under the radar of the webcam, to hand me a lunch sandwich. 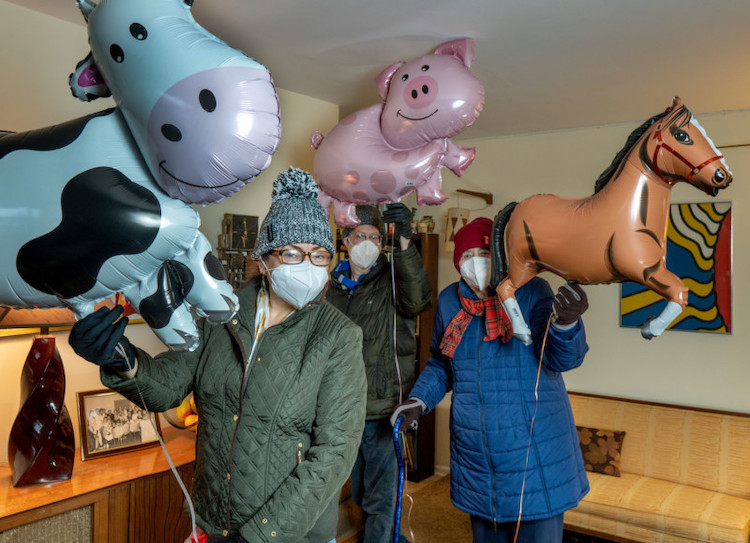 Day 253: Thanksgiving, 2020. Sophia had an idea. We could buy some big animal balloons on Amazon and then parade around our living room, making our own special Thanksgiving Day event!

My Modern Met granted permission to feature photos and text by Neil Kramer.