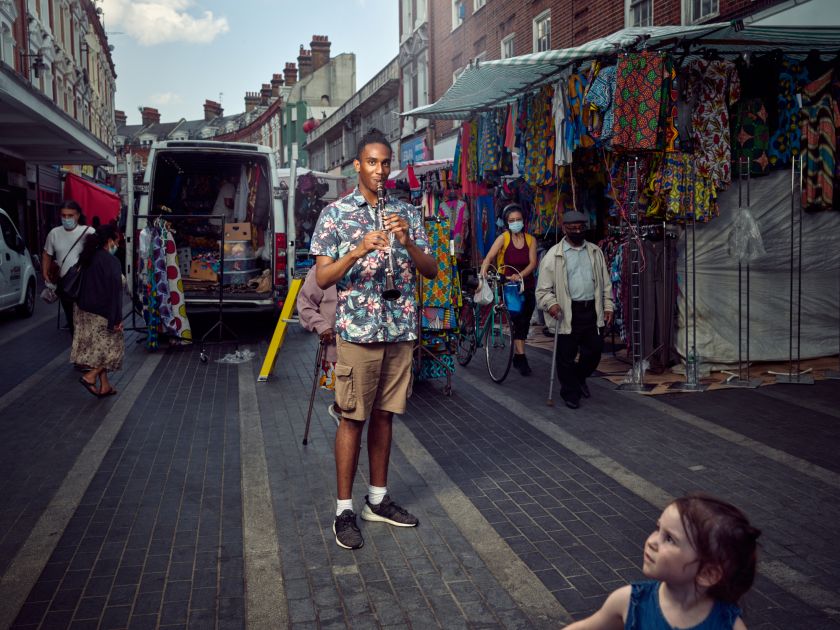 It was following his first encounter with the Brixton Chamber Orchestra in early 2021 that local photographer decided to capture its diverse members, taking their portraits at various iconic spots around the London neighbourhood.

“They were so talented and energetic as they passed down the street,” recalls Wharley. “People were coming out of their houses to watch them.” Lambeth is one of the most demographically diverse boroughs in the UK, and, he adds, “The vision of this diverse group of musicians just seemed to fit Brixton streets – I immediately wanted to take a series of portraits.”

The features classically-trained players in the earlier stages of their careers, blending the talents of top-class musicians with skilled volunteers. Whether through upbringing or an acquired love of Brixton, all share strong connections to the local area. That’s important for a group that was founded by locally-born conductor Matthew O’Keeffe and styles itself on its geographic name. 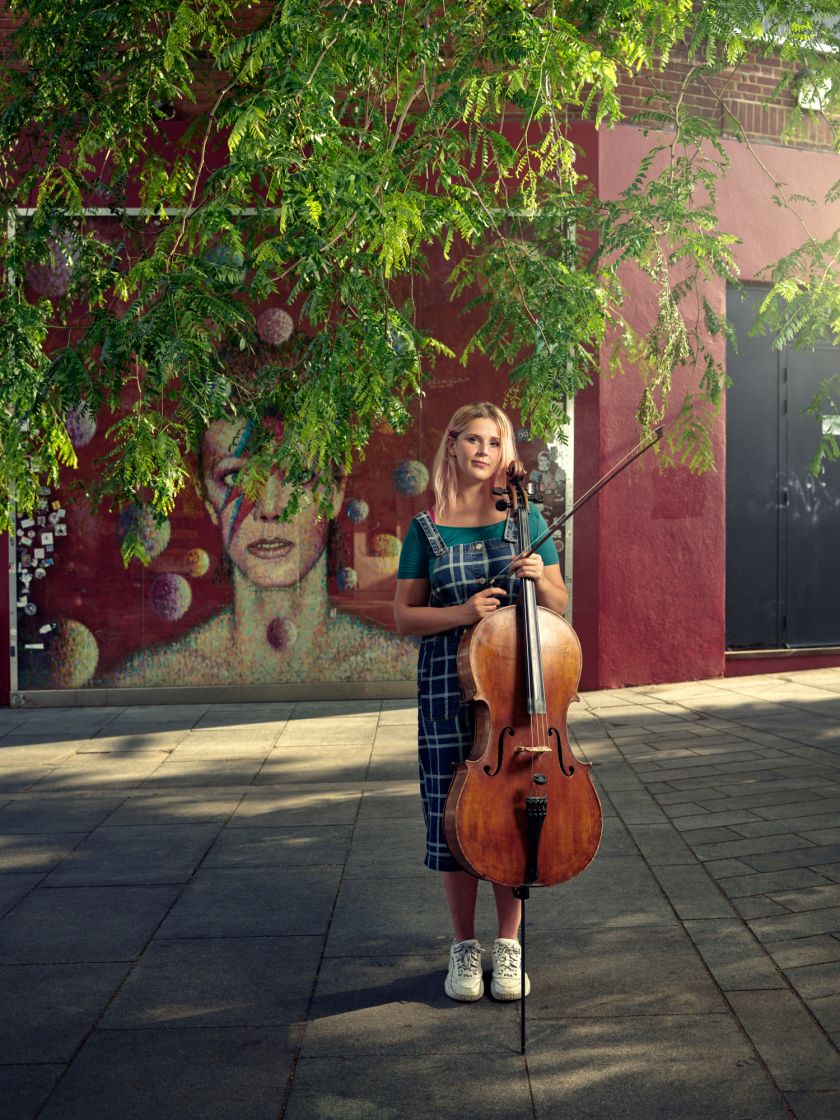 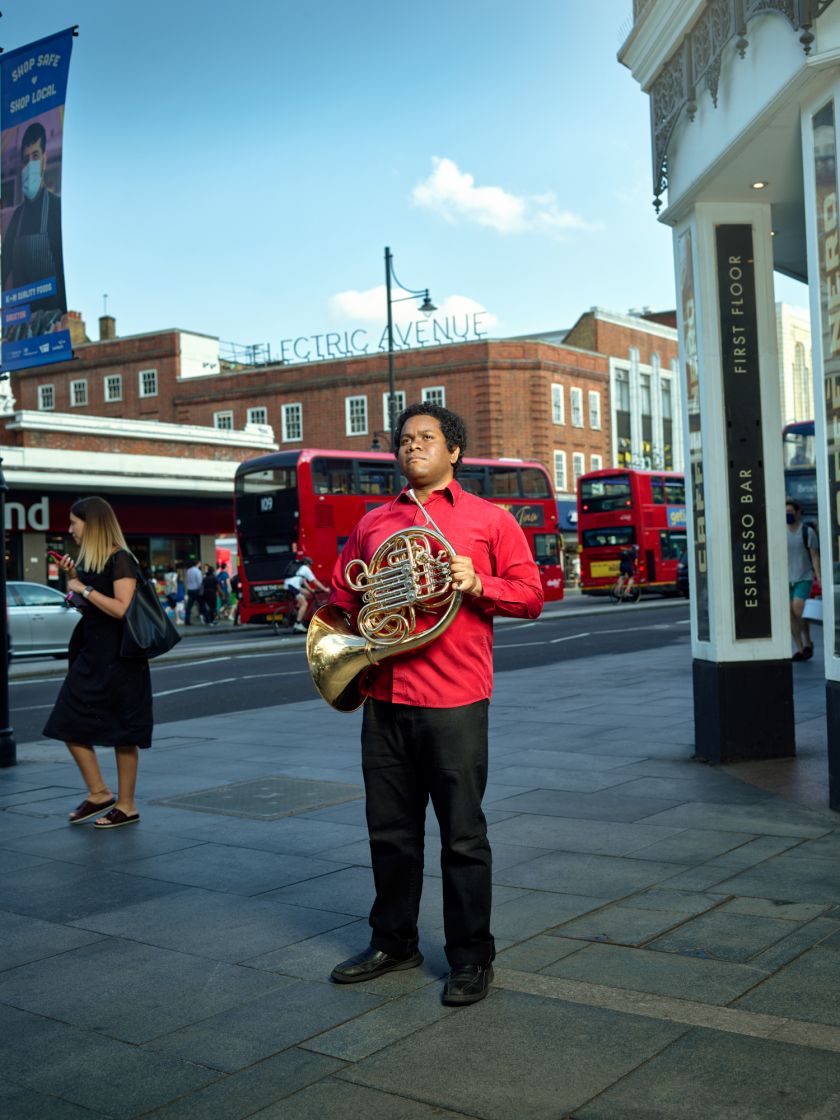 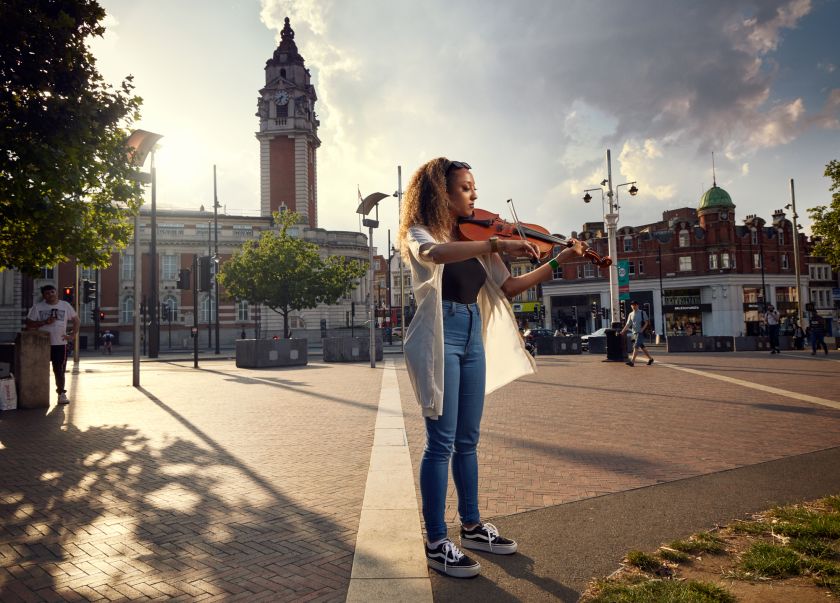 O’Keeffe’s aim was to champion classical music, presenting it to new audiences in unexpected venues, and, making good on the strapline, since 2018 the group has become a feature of markets, pubs, clubs, parks, churches and community centres across Brixton, touring Lambeth’s housing estates on a biannual basis with an eclectic programme of music.

It was during the global pandemic that the Orchestra also became a “lockdown balm”, as it presented a series of al fresco performances, titled Lockdown Lifts, to bring some much-needed cheer to central Brixton. From classics to turn the ear of a passing shopper like The William Tell Overture, to lesser-known but familiar pieces like Danse Macabre, to clever arrangements of pop songs (like Electric Avenue) – the group’s dynamic, genre-hopping setlists help to bring everyone together.

For Wharley’s photo project, the aim was simple: to capture the characterful players and their beautiful instruments while they made music in non-traditional local spaces. “I wanted to make rich, full images that gave you a lot to look at as portraits, but that also elevated local places with a perspective or fullness of detail that showed you them afresh,” he says. Working with digital medium format and flash lighting added detail and control for both the portrait and the landscape aspects of the shots. 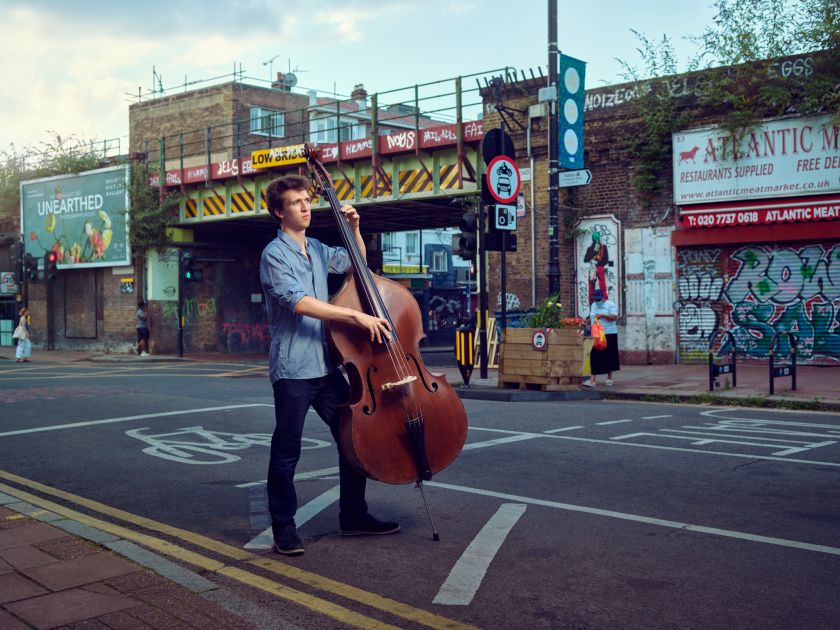 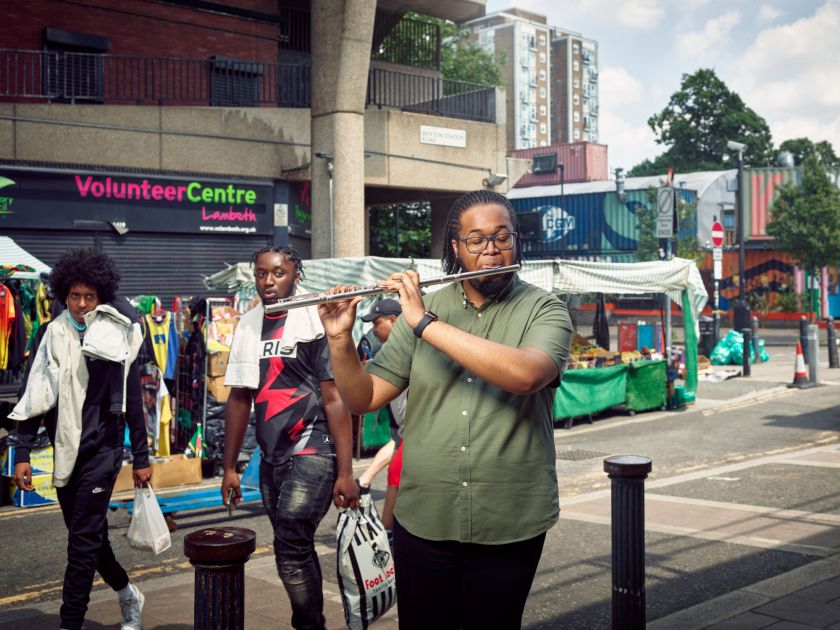 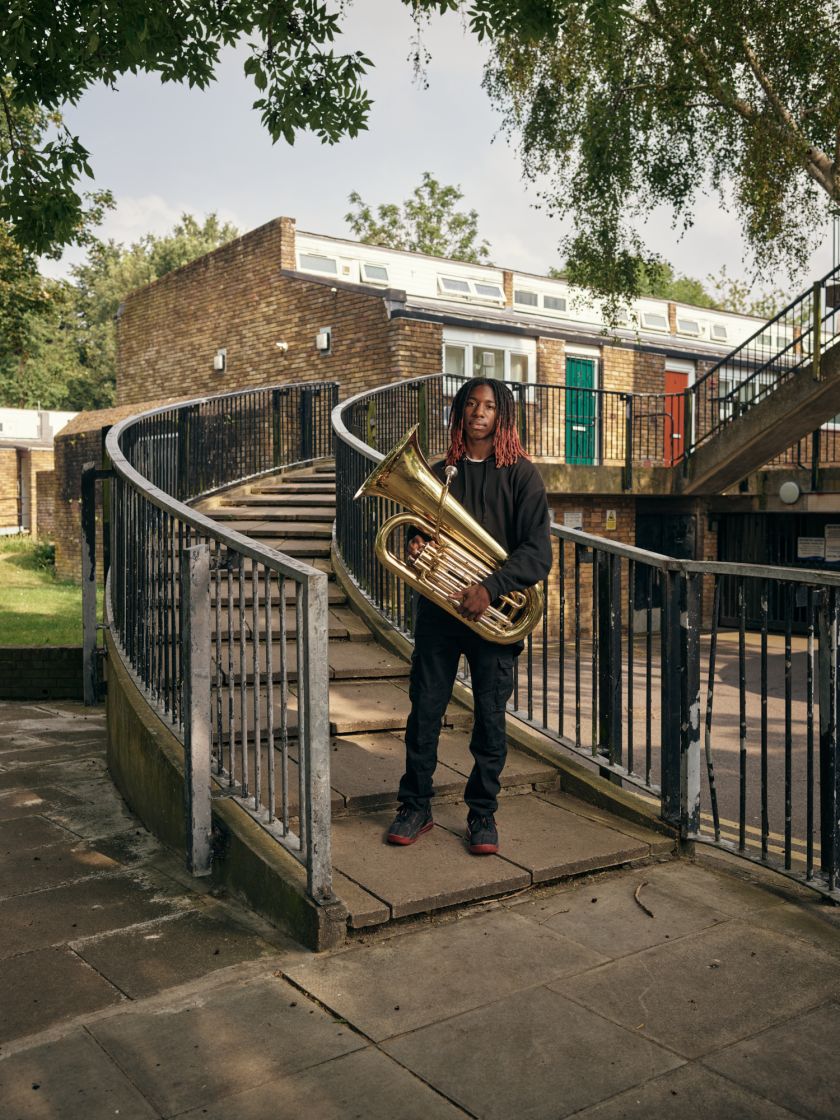 Interestingly, the locations for the portraits have history. With the 40th anniversary of the Brixton Riots last summer, and projects like 81 Acts of Exuberant Defiance exploring the repercussions of those events, Wharley and the orchestra agreed it was important “not to create simply a series of outsider’s picture postcards of Brixton, but include places that resonate to those who know and have lived in the area”.

Wharley adds: “We shot in iconic spots like Electric Avenue, Windrush Square and at the Bowie Memorial, but also amid the bustle of local traders on Station Road and Market Row. We went to Atlantic Road, close to the front line of the black community’s confrontations with the Met Police in 1981, but also to the heart of local estates like Angell Town that have been changed in quieter ways by their communities. We captured musicians in the serenity of Brockwell Park and the Cressingham Gardens estate, but also found moments of unexpected peace and light right in the centre.” 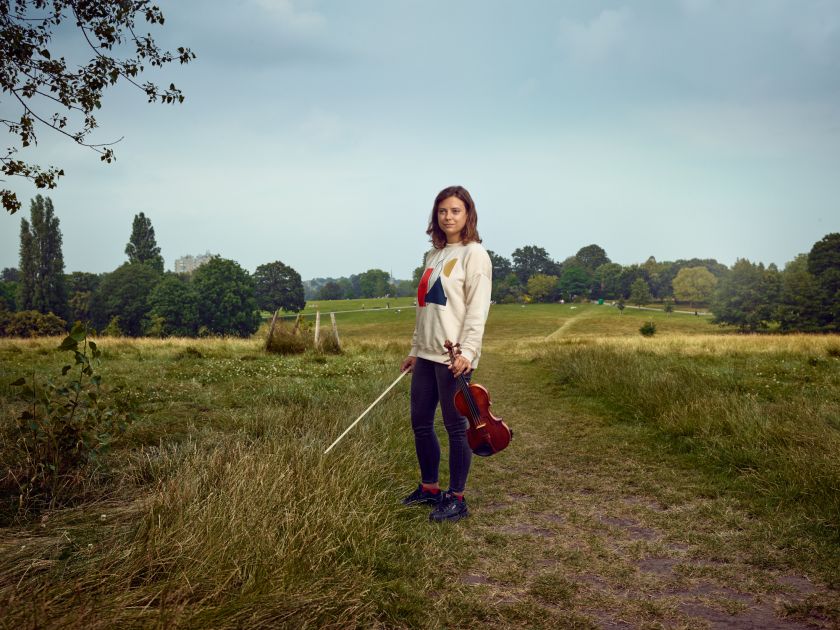 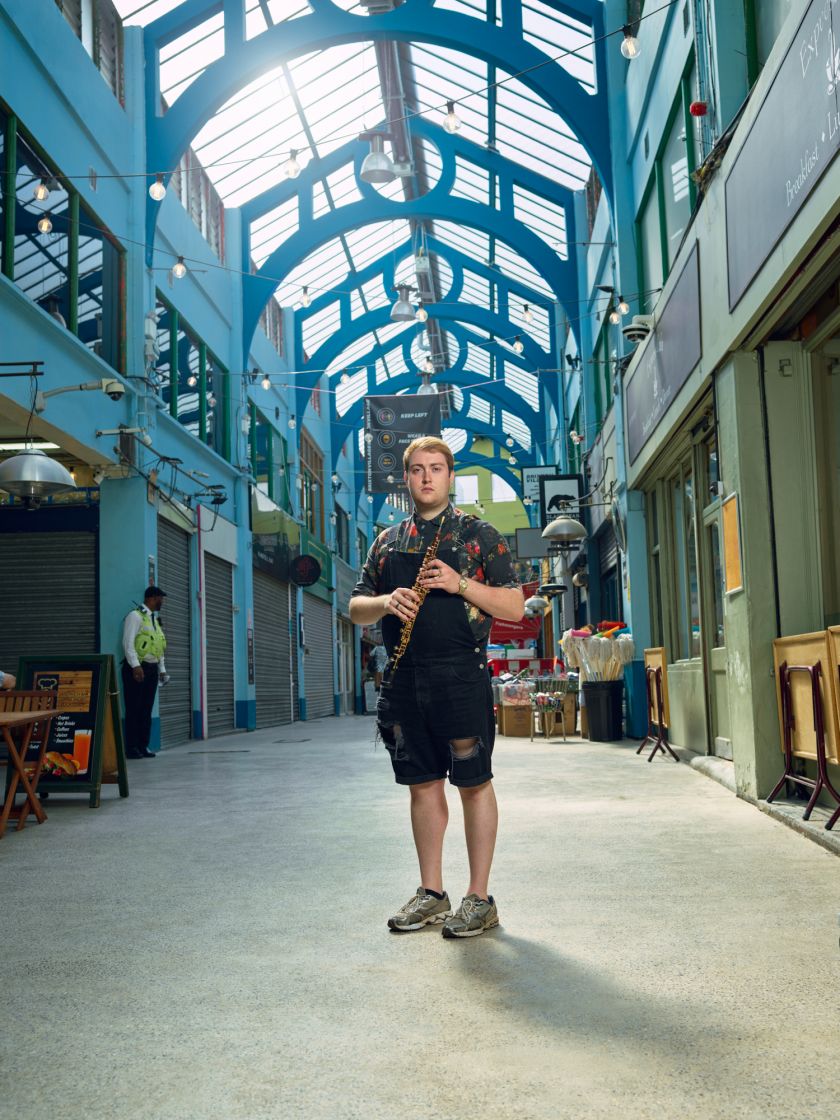 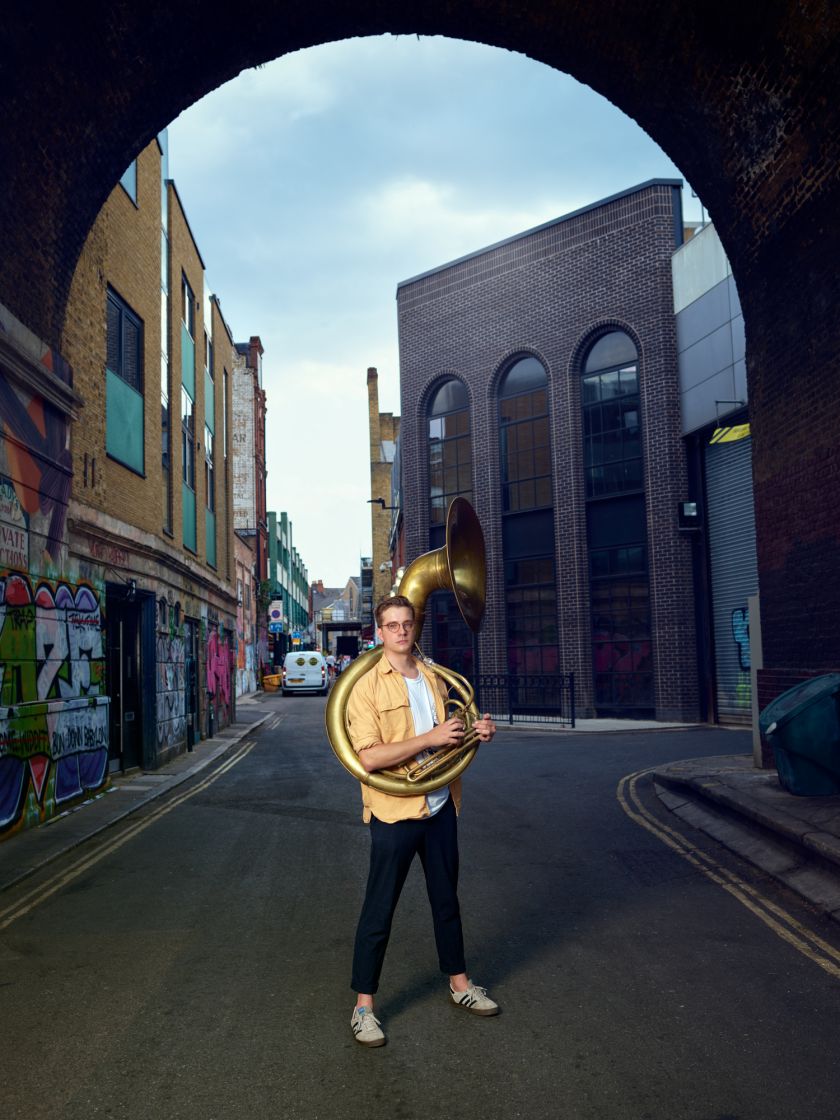 Wharley continues: “I wanted to show people a Brixton they know and don’t know, though the area is undoubtedly changing due to a host of socio-economic pressures, the group seem to represent part of a joyous, vibrant evolution in the area that defies a simple negative narrative of gentrification – I wanted to put them at the heart of that positive story.”

Discover more of Michael Wharley’s recent work at or follow the award-winning photographer on .