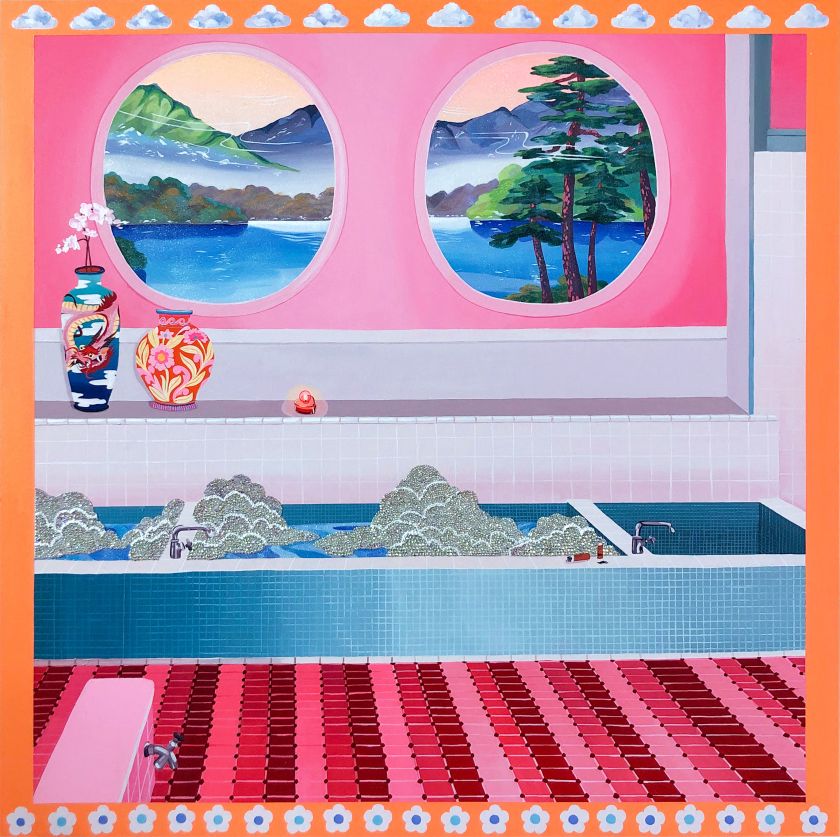 The Water is Getting Cold, 2021 © Rachael Tarravechia

Through her warped and trippy depictions of interiors, the Brooklyn-based artist explores intimacy, privacy and the growing impact of social media.

Originally from Charlotte in North Carolina, Brooklyn-based pursued a BFA in painting from Savannah College of Art and Design. Post-graduation and she moved to New York to work as a studio assistant for various artists before eventually finding her feet in the industry and going out on her own. Now working as a full-time artist, Rachael has exhibited her works internationally across the US, Hong Kong and France, with a current show entitled Wish You Were Here held at LAUNCH F18 in the city. She’s also currently represented by the female-run Tchotchke Gallery – with her second solo exhibition in New York taking place in January next year.

Rachael’s are both bountiful and meticulous as they depict the intricate details of the home. However, these interior scenes appear slightly off; they’re warped, weird and impossibly colourful. The bathroom tiles, towels and lipsticks are lined up in abundance as they’re sprinkled with vibrancy, glitter, patterns, luxury goods and a surrealist sense of perspective. “I find a lot of my inspiration through viewing old homes – whether I’m physically in the space taking photos or looking through vintage Architectural Digest magazines from the ’80s,” she tells us. “I also draw inspiration from disco, love songs, horror moves and quirky little items in the dollar store.” 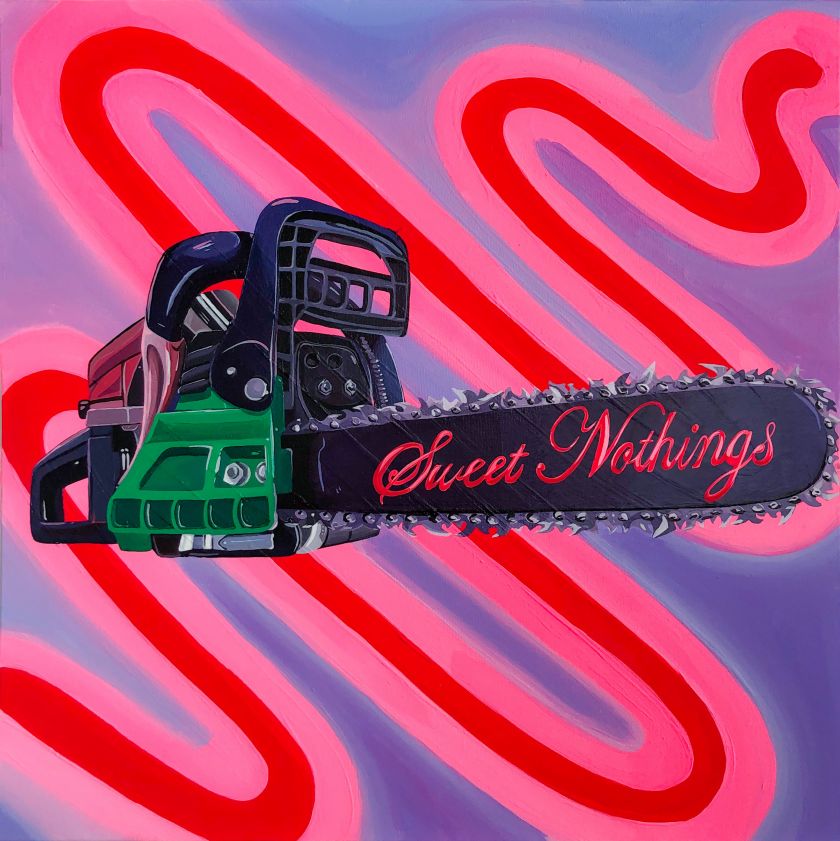 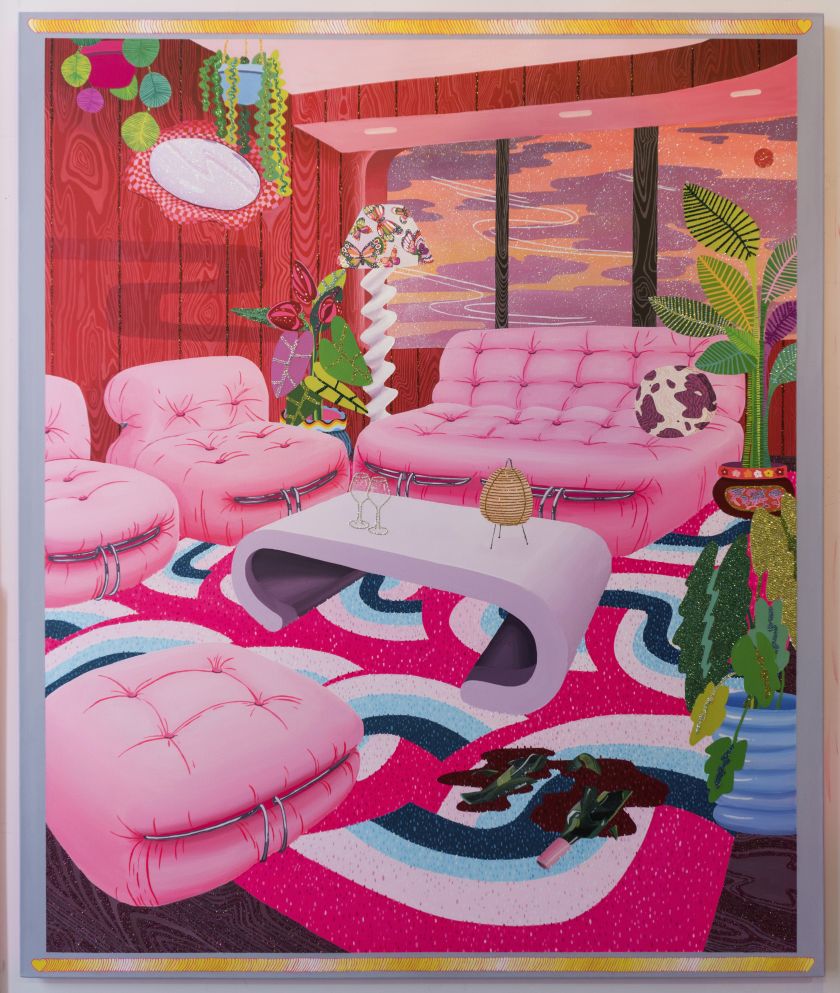 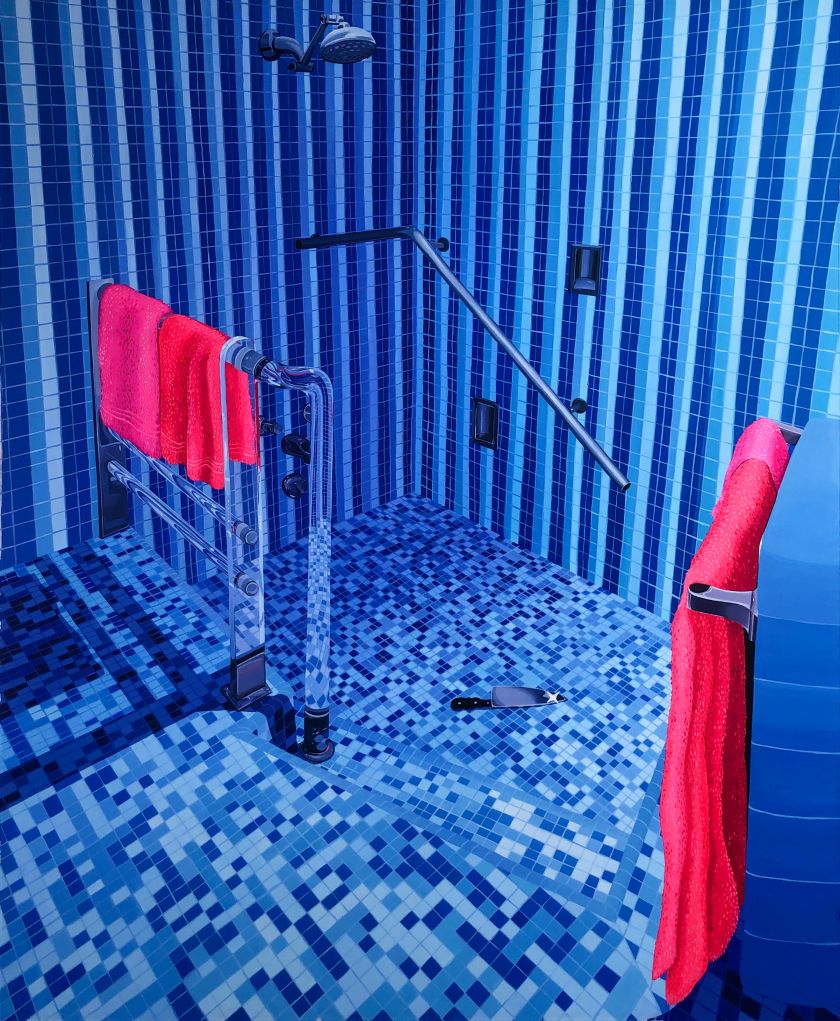 Once she’s found her inspiration, Rachael then transfers her thoughts onto paper. But first, she finds either a photo or a digital image to use as a reference point – the latter she makes herself so that she can construct her own “dream home”. Next, she plays around with colours in Photoshop then “crudely” adds her palettes to map out the compositions. Colour is highly important to the artist, so she makes sure to play around with different swatches and pairings as much as possible in the preliminary stage. “Then, I draw out the scene onto the canvas, paint a two-inch border around the edges, and tape it off,” she notes. “I start painting the background and then move to the foreground. Embellishments and glitter are left until the very end.”

What’s most interesting, though, is Rachael’s subject matter. Far more than a dizzying set of aesthetically pleasing interiors, Rachael’s work speaks to the overly saturated digital world we find ourselves in. By merging pop culture references with trippy perspectives, her work explores the “threshold between private versus public, intimacy, rosy retrospection, violence and fear,” she says. “With the growing influence of social media, these topics have become more and more relevant, in my opinion. We all decide what to share and what not to share with the public, which builds a public persona. Previously private areas of our lives are now creeping their way online, and it’s interesting to see where the line is drawn. How much do we share? Why do I look back at old photos of mine and consider them the ‘good old days?'” 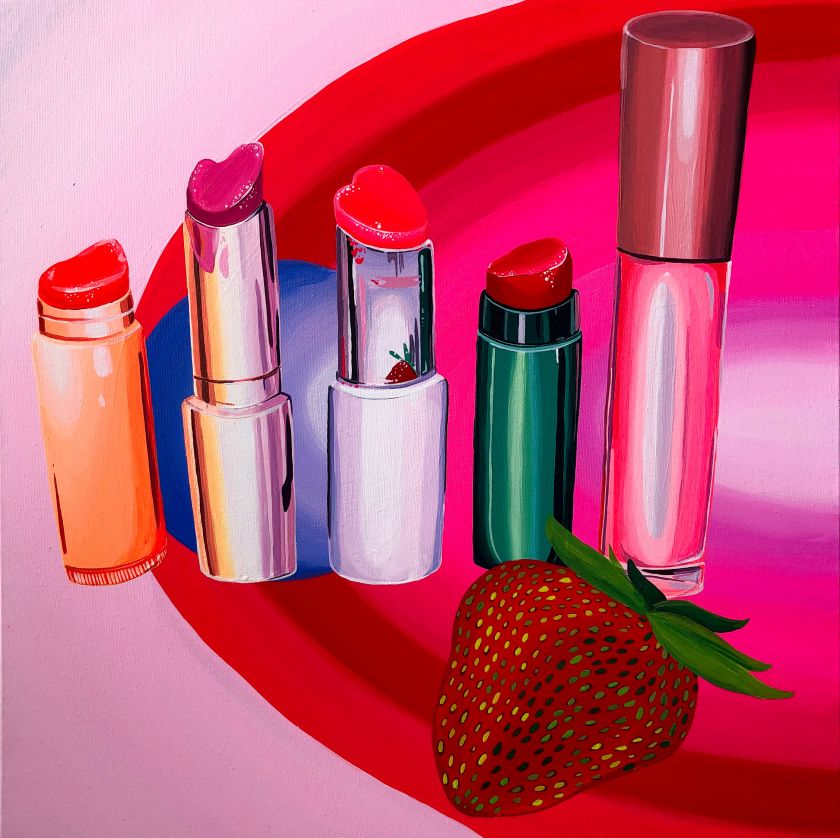 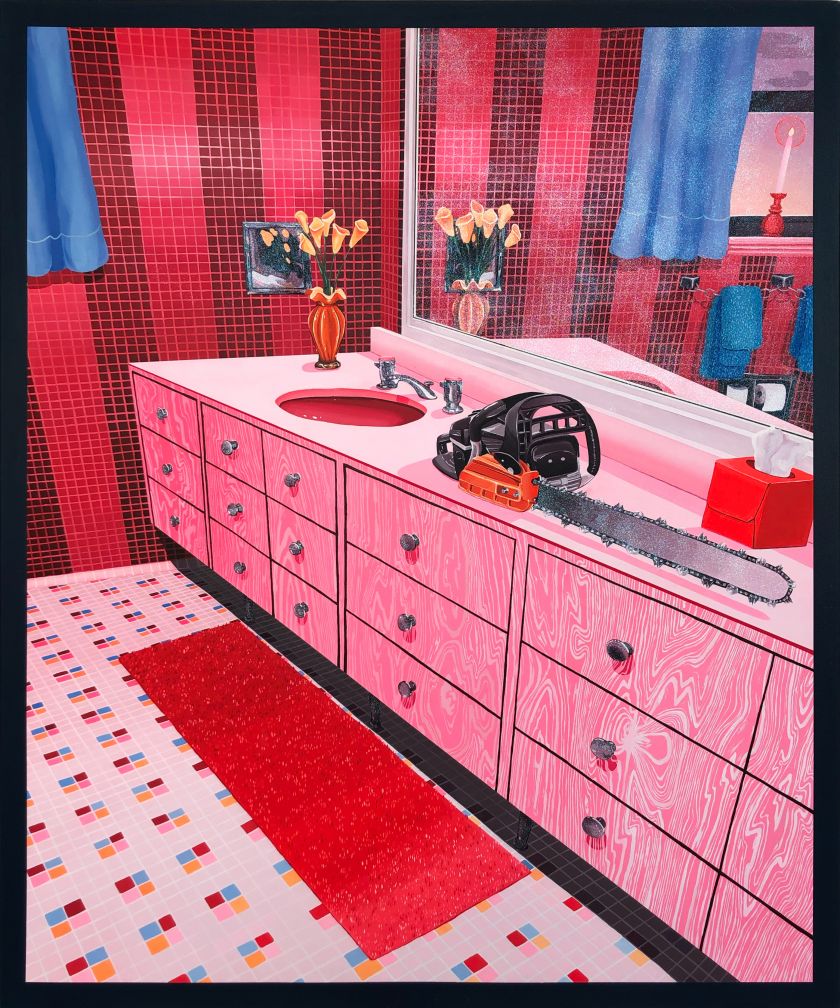 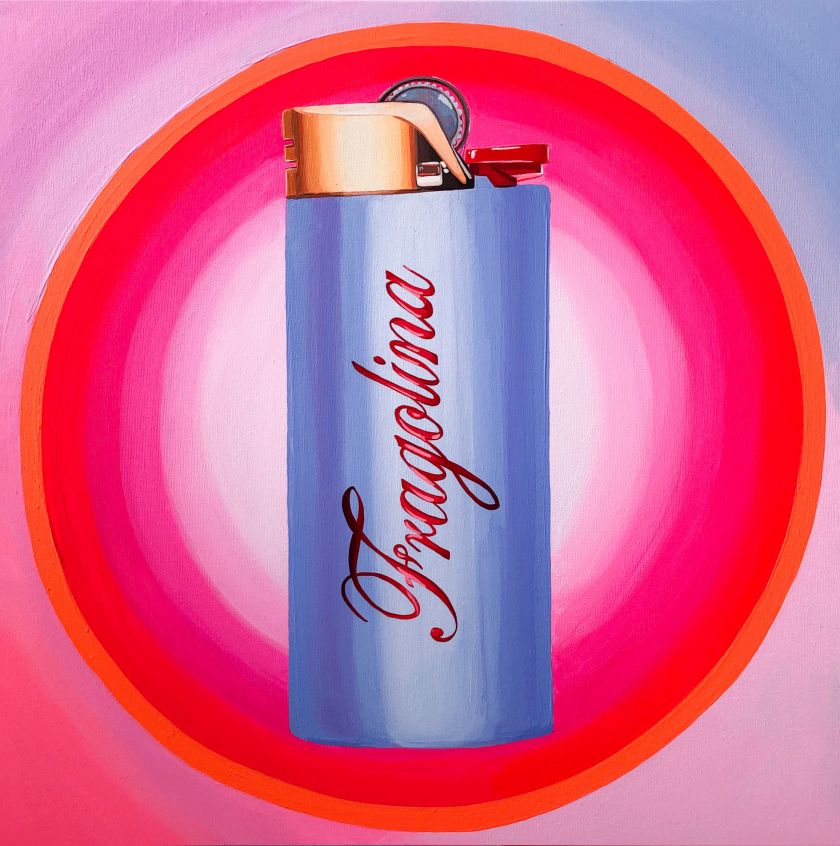 In a time before now, perhaps the world would rarely see a glimpse inside another’s home, peeking into the lives and habits of the person who occupies it. In Rachael’s paintings, the intimacy of the home is brought into the public eye as she gives it a new and profound meaning. Cleanse, for example, is based on a photo she took in a bathhouse in Japan. “There was a singular light on, as well as lights on the other side of the frosted windows, creating a really cool gradient of colours,” she adds. “It’s like a glimpse into another altered reality – one where everything is flipped.” The piece is a favourite of hers and sees a sun-lit room come to life as it brightens up the tiles below. “The hallway looks as if it continues infinitely,” she continues. “Hallways are also an interesting concept to me; it’s like a space between spaces that only really serves for functionality and to direct movement.”

Speaking of how she hopes her audience will respond to her work, Rachael’s main goal is to evoke an emotional response: “I hope the viewer will sense just a little uneasiness after looking at the painting for a minute,” she notes. “The colours are very vibrant and inviting, but these spaces are painting with warped perspectives, and there are hints that something sinister has taken place. Or maybe not. I always find it fascinating to hear other people’s ideas as to what, if anything, has taken place.” 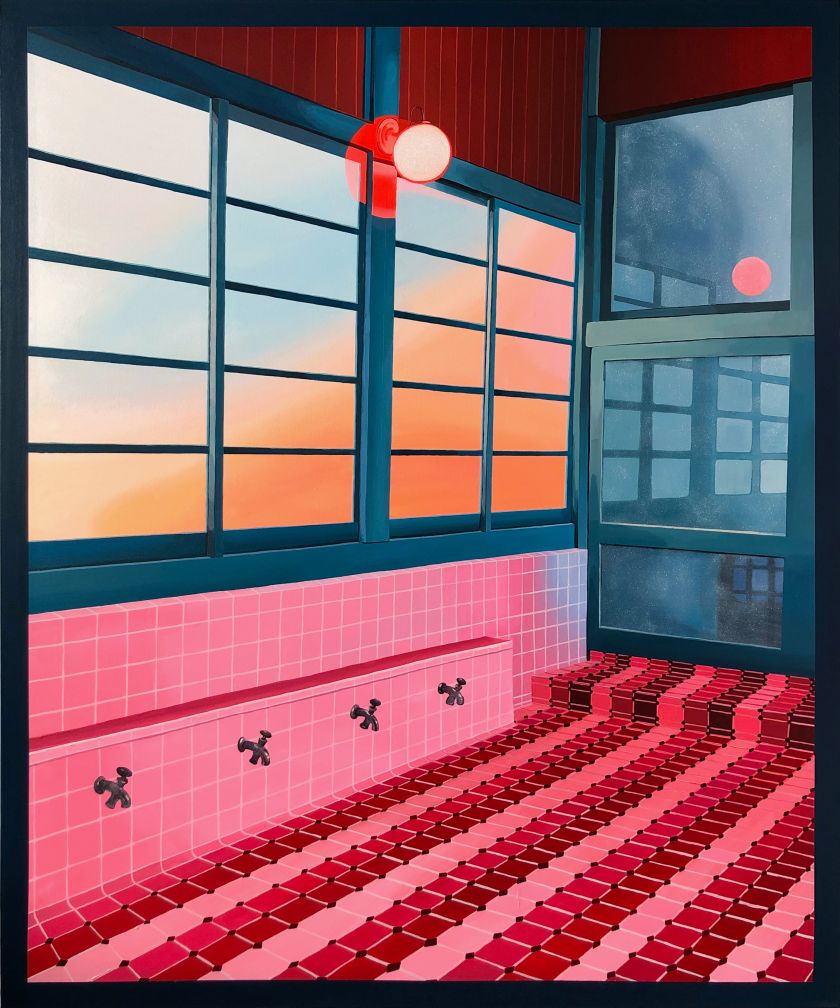 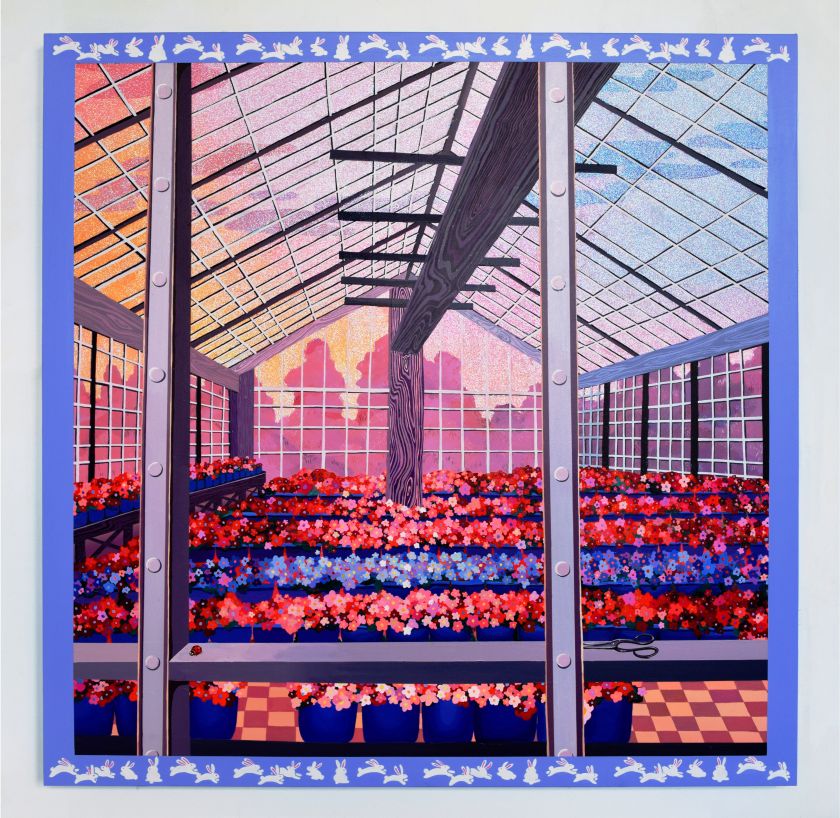