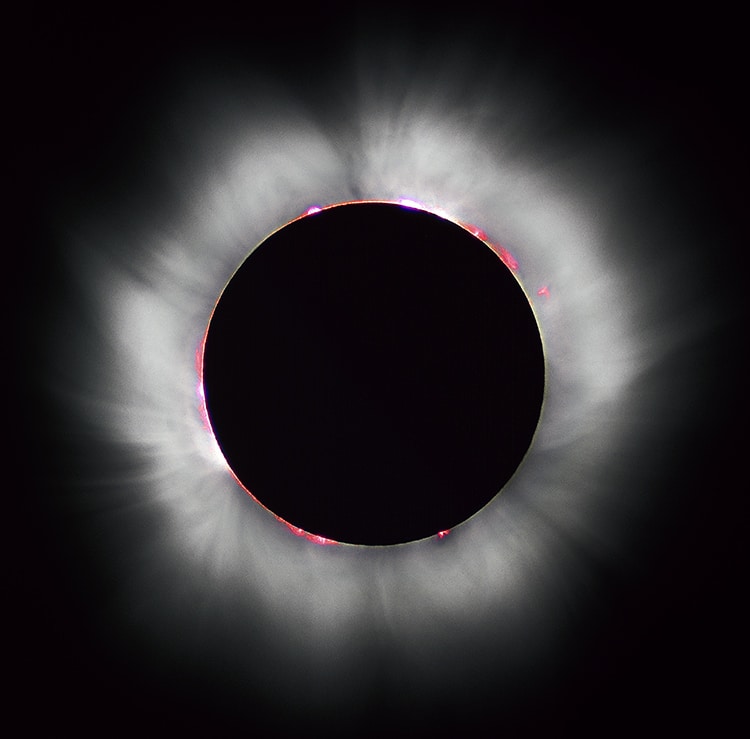 What are your plans for April 8, 2024? Mark your calendars now because in two years a once-in-a-lifetime celestial event will pass over the United States. The —a total lunar solar eclipse—will cut a path of fleeting shadow from Mexico to Canada. The event will be viewable from most of the contiguous 48 U.S. states (aka the Lower 48), but a band from Texas to Maine will offer prime viewing of the eclipse’s totality when the Sun is fully obscured.

A solar eclipse occurs when the Moon passes between the Sun and the Earth, blocking the Sun’s light in whole or in part. Annual eclipses are partial eclipses where the Moon is too far from Earth to block all the light. A total solar eclipse, however, is rarer. One occurs about every 18 months. This occurs when the Moon is close enough to Earth to obscure the much larger (and much farther away) Sun. A small portion of Earth dramatically falls into shadow, and this shadow moves across the planet. This darkness has only fallen on the United States 21 times since the Declaration of Independence in 1776.

The last to cross the United States was in . Millions viewing the celestial phenomenon. It was the first total eclipse over the nation in 40 years. After the upcoming , the next one will not occur in the U.S. until 2045. If you are interested in viewing this incredible event from an optimal location, check out the detailing the 124-mile-wide band where and when the totality of the eclipse will fall. For example, viewers in Cleveland, Ohio, will lose sunlight for three minutes and 50 seconds at 3:13 pm EDT on April 8, 2024. Hotels in regions within the path of the eclipse are expected to fill up quick.

Even if you cannot travel to the band of totality, you might be able to still gaze upon the eclipse, weather depending. You will see a partial eclipse. No matter where you are, you will need solar eclipse glasses. Staring directly at the Sun during an eclipse is very dangerous and can permanently damage your eyes. The only time it is safe to look without glasses is during the period of totality, if in the proper location. Solar eclipse glasses should be approved by the International Organization for Standardization (ISO). The has compiled a helpful list of quality vendors to meet your eclipse needs. Buy your glasses and mark your calendars for April 8, 2024 to catch one of the greatest shows on Earth.

On April 8, 2024, a total solar eclipse will pass over North America, casting a 124-mile-wide band of darkness. 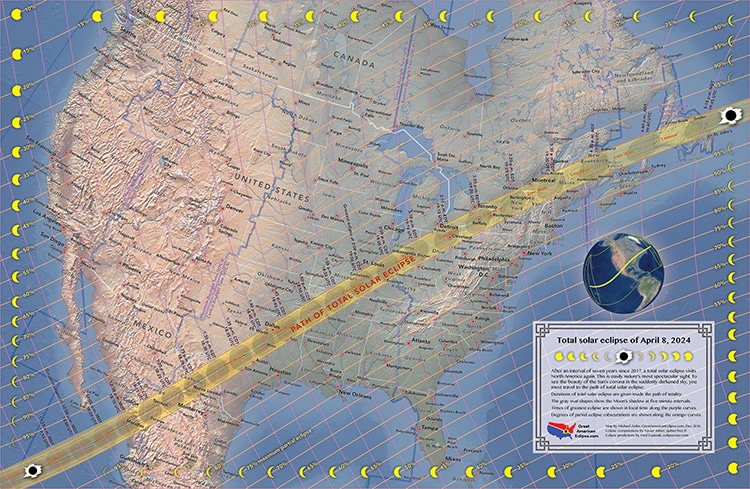 A total eclipse is a rare event in any given location. 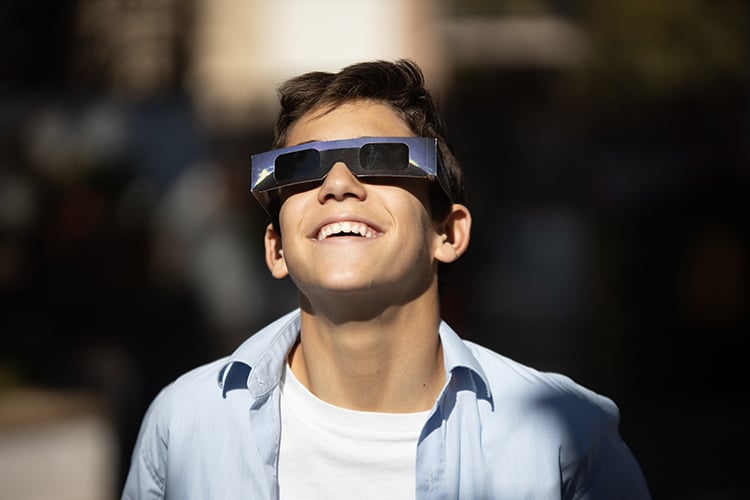 The next to cross the United States will not occur until 2045. 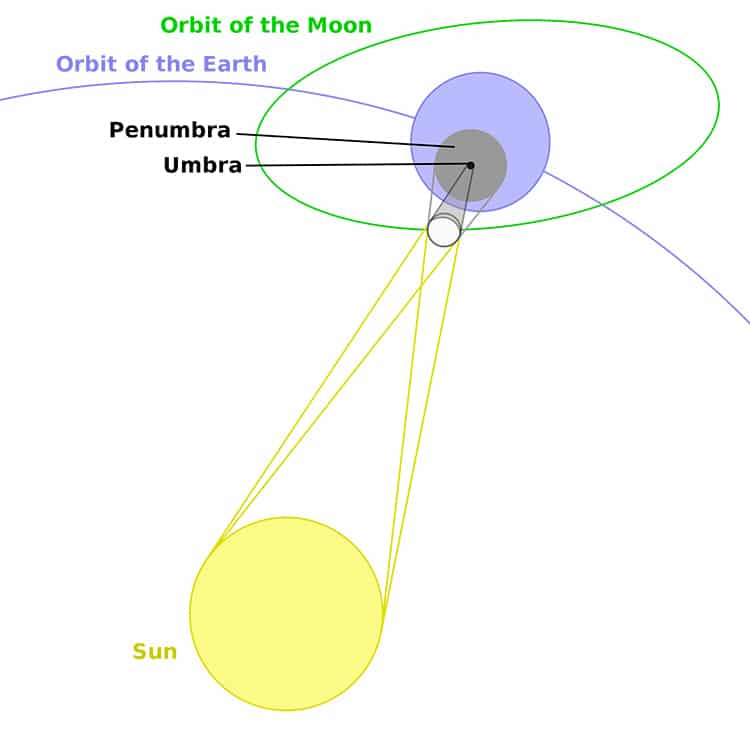 Mark your calendars—eclipses are popular and hotels in the totality regions fill up fast.

The eclipse is one of nature’s greatest shows—don’t miss it! 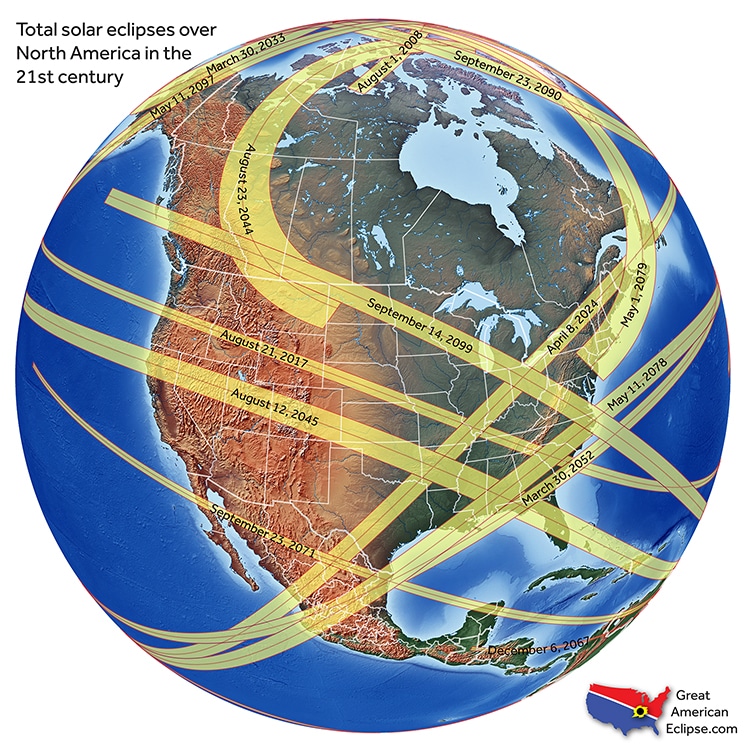