The CG video ROBOTICA by is a 58 seconds animation inspired by contemporary theatre, combining elements from ancient greek culture, robotics, and digital art with a photorealistic visual aesthetic. Lo Schiavo is fascinated by some of the greatest masters of contemporary theatre and dance of the late twentieth century as well as by Bill Viola’s video art and Crypto Punks.

Despite robotic figures, the video is all about projecting humanity through technology and is inspired by artists such as Dimitris Papaioannou, Pina Bausch, and Bill Viola.

The performance is divided into three main scenes. They all manifest a particular feature of human socialisation.

The first dancing act is inspired by the idea of humans as a unique collective organism, a group of synergistically interacting organisms of the same species all working for the collective benefit. This view attains liberation from self and individualism.

Opening today the exhibition Dystopian Visions at curated by
Happy to be part of this incredible project!

The second act is about domestication and the epigenetic principle that the environment also shapes part of our DNA. I like to believe that our personal choices and the information we absorb are stored in our epigenome and passed into future generations. So each choice has an impact on our society. 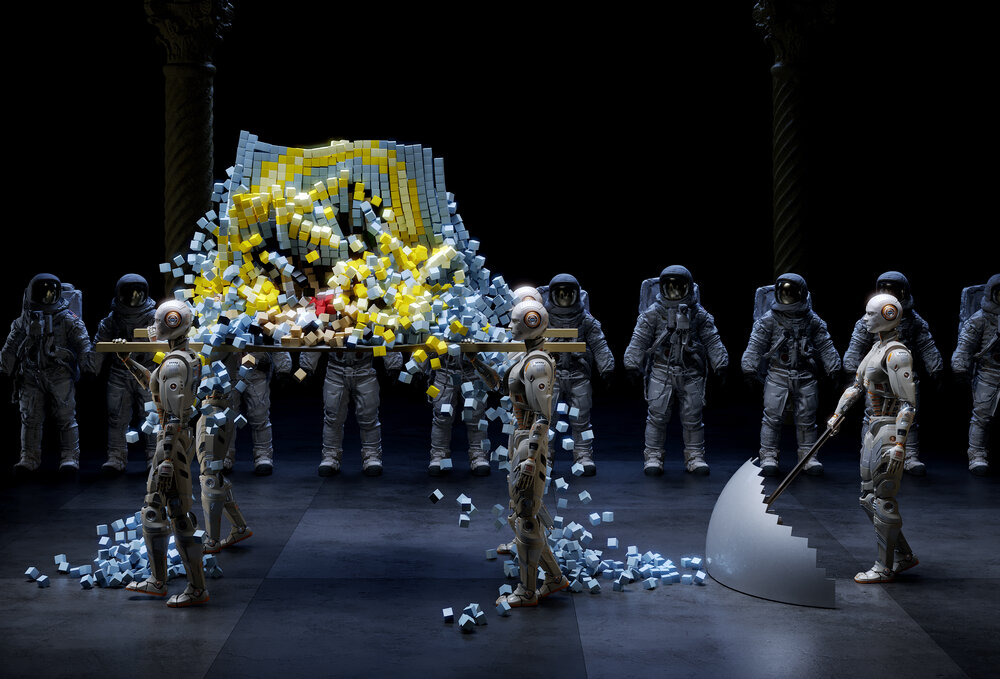 For the final act, the artist staged a procession, a celebration to express belongingness and community inspired by the ancient greek ceremonial Panathenaic festival rituals where people were marching on the streets of the ancient cities with their offerings. In this scene, the robots carry an original Cryptopunk sculpture created by the artist and made of 576-pixel boxes.

Born in Italy, Lo Schiavo currently lives and works between London and Milan.
He studied architecture at La Sapienza University in Rome with a specialization in visual design.

Giuseppe Lo Schiavo is an award-winning visual artist based between London and Milan. His research is aiming to create a bridge between art and science. Using AI and machine learning, virtual reality, infrared systems, or microorganisms in the lab, the artist’s research often focuses on opposing elements: creation-destruction, past-future, analog-digital, real-virtual