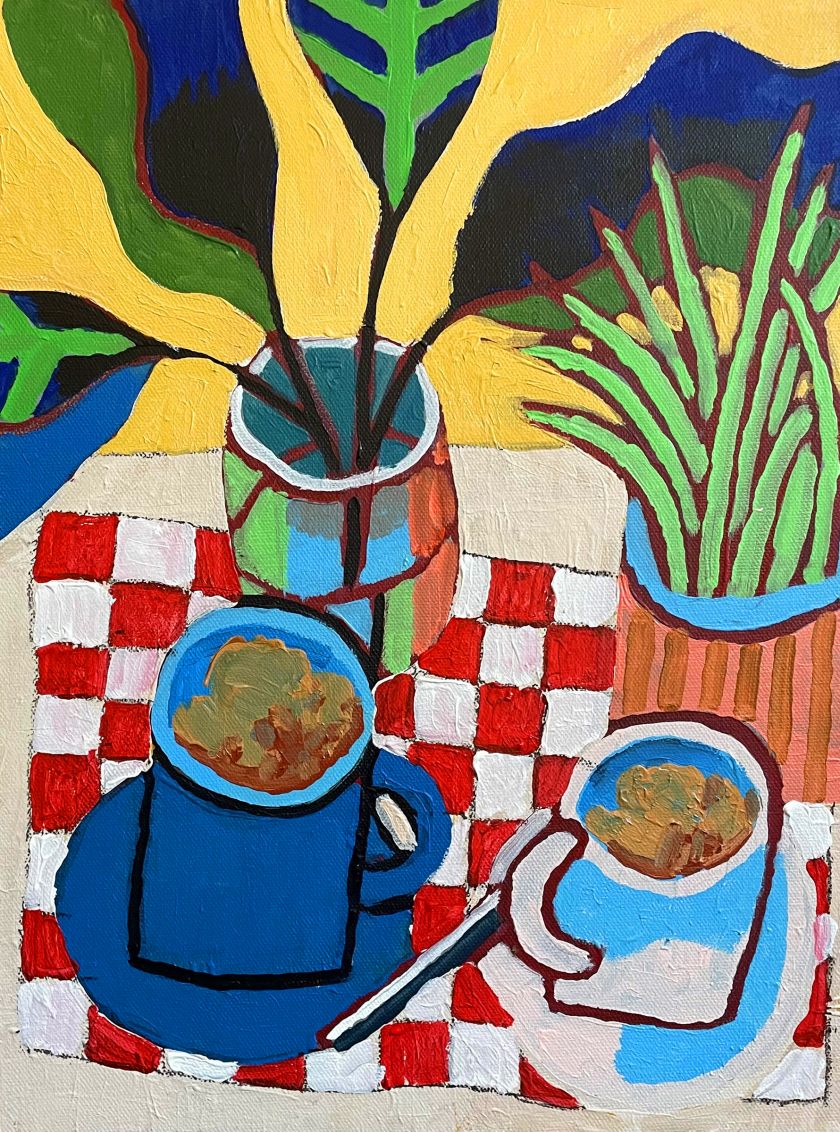 In his debut solo show at Tila in Deptford, the graphic designer-cum-artist presents a “good summary” of paintings made over lockdown.

There is nothing more synonymous with painting than the contents of the home – fruit bowls, table cloths, pots and pans being a few examples that have reigned supreme throughout the medium’s history. But what’s so utterly compelling about the work of and that which makes him stand out from the crowd is the style in which he interprets this subject matter. Everything is scruffy, almost naive, as Tom maps out the colourful depictions of coffee mugs, plants and condiments.

It’s consistently charming and a topic that he started to explore over the last year in lockdown. “Up until recently, visual inspiration came from things in my room, for obvious reasons,” he tells us. “I became interested in the mundanity and boringness of everyday things, repeating the same objects and patterns over and over but trying to make them as bright and as bold as possible.” 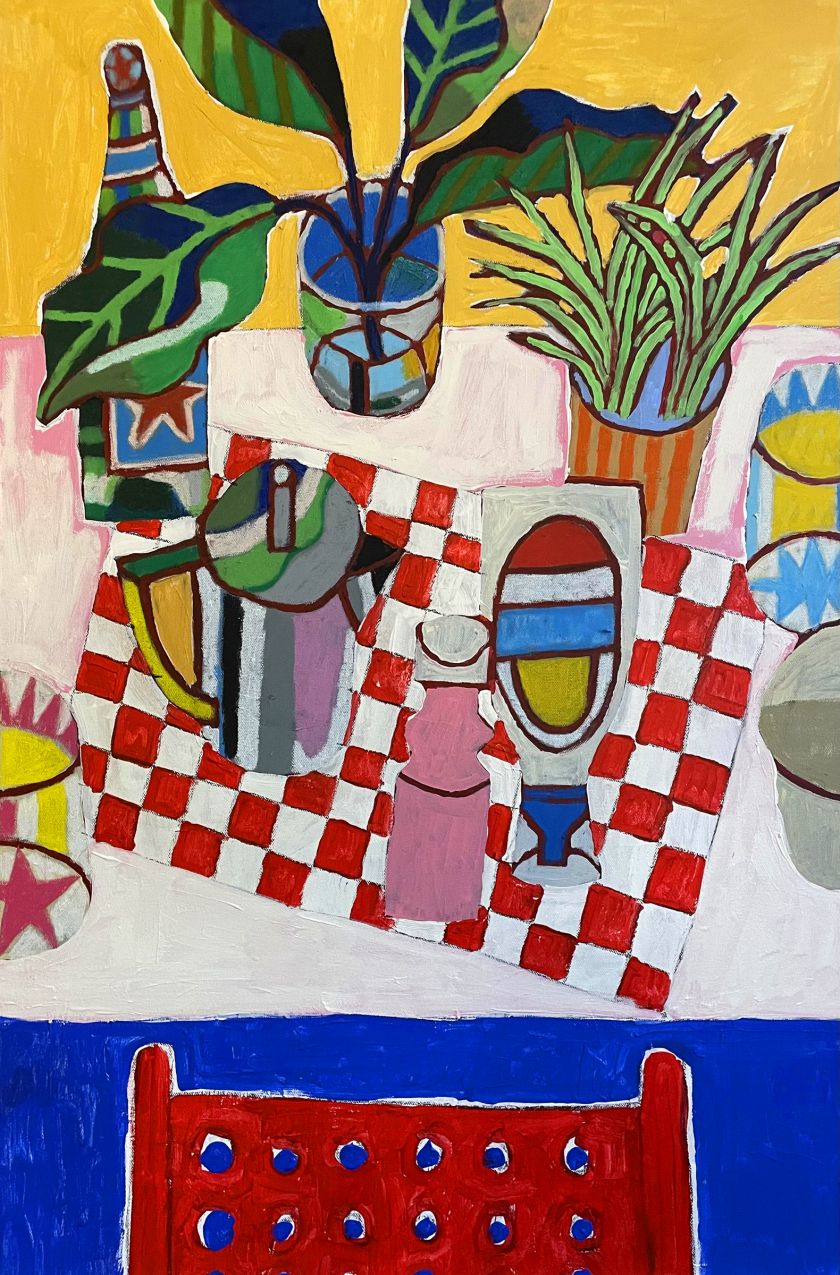 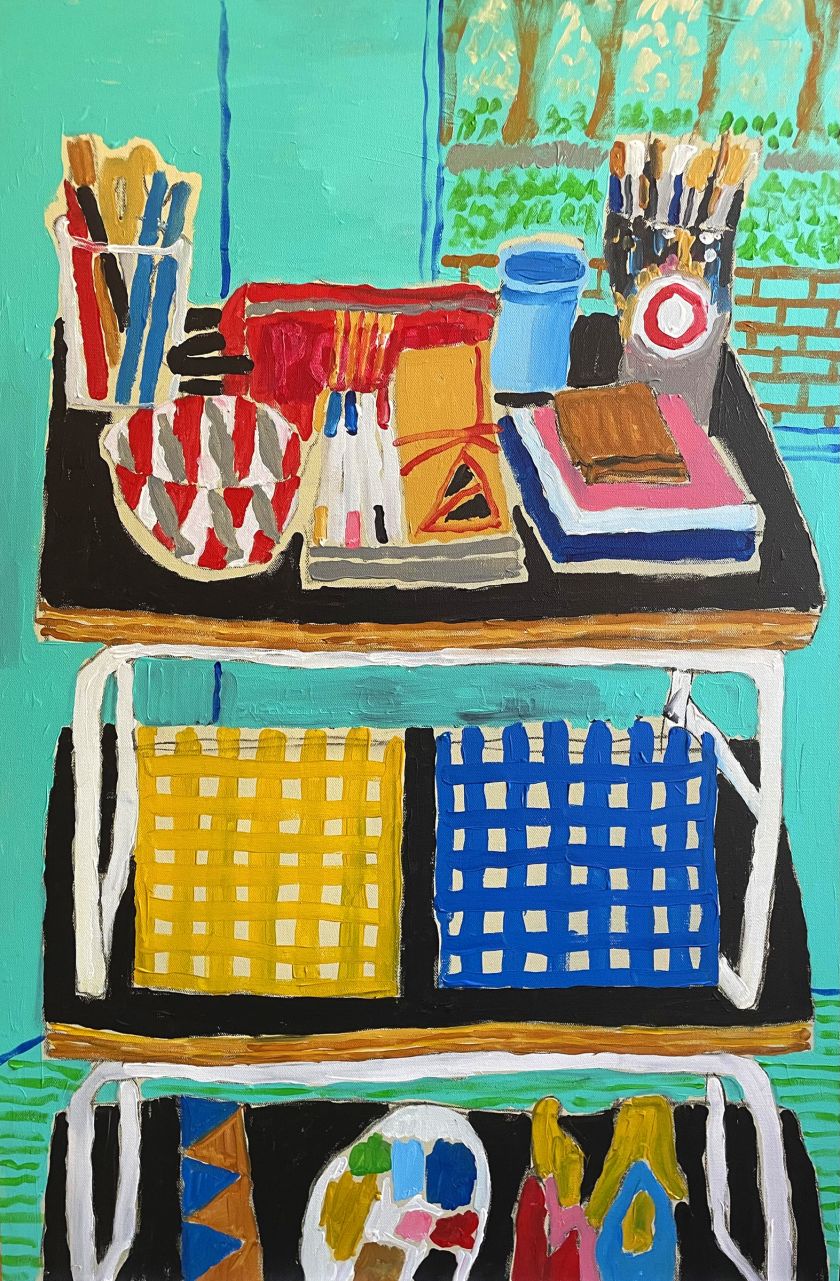 Tom grew up in Wakefield, West Yorkshire, and studied art at school before pursuing work as a printer. This job landed him a role in graphic design, a career he’s been pursuing for the past ten years – seven of which have been in London. At the moment, Tom works as a senior designer and art director at Otherway. “I was furloughed last year during the first lockdown and needed a creative outlet,” he explains. “I’ve always been interested in more traditional art practices but never found the time to pursue them properly outside of work.”

During this period, Tom began experimenting with collage and paper mosaic, “moving bold shapes of colour around until I felt comfortable with the process.” It wasn’t long until he tried out pastels and, in the following six months, he found his painterly calling. “I think my practice is still in its infancy, and I’m keen to keep experimenting and moving it forward.” 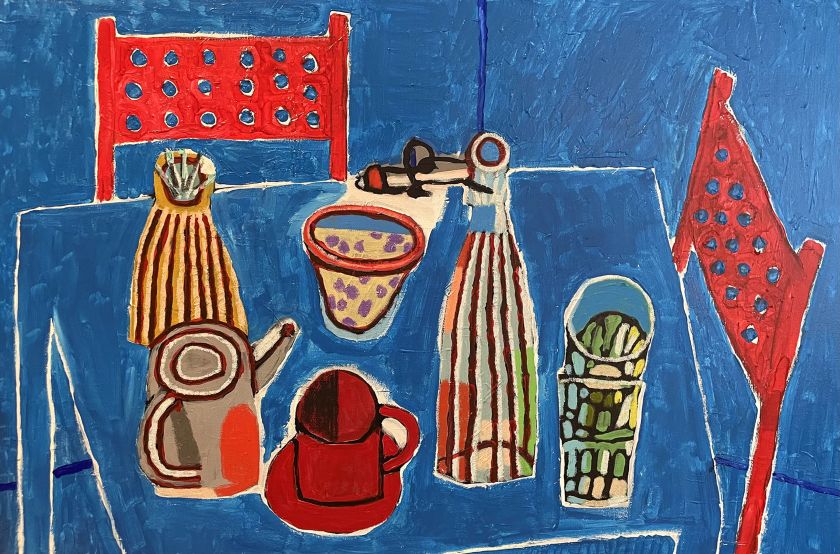 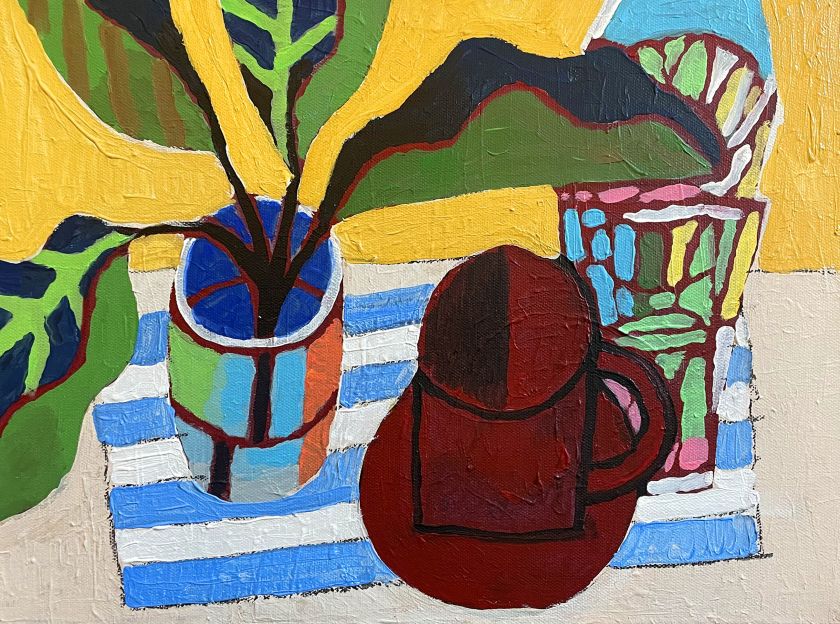 Over the pandemic, many of us turned towards various crafty and remedial outlets as a way of keeping creative, productive and – of course – sane. When Tom started painting, he realised his love of everyday objects and household items. So much so that he’d arrange the objects in front of him to kick off the process, and then he’d start work on a quick charcoal sketch directly on the canvas before painting.

“I try to work fast and loose,” he says. If unsatisfied with the composition, he’ll move the objects around until he finds the sweet spot, “changing reflections and perspectives.” He continues: “I try not to think about the piece as a whole. Instead, I concentrate on small areas, abstracting what I see into bite-size chunks of colour and then working fast to build them up into something bigger.” 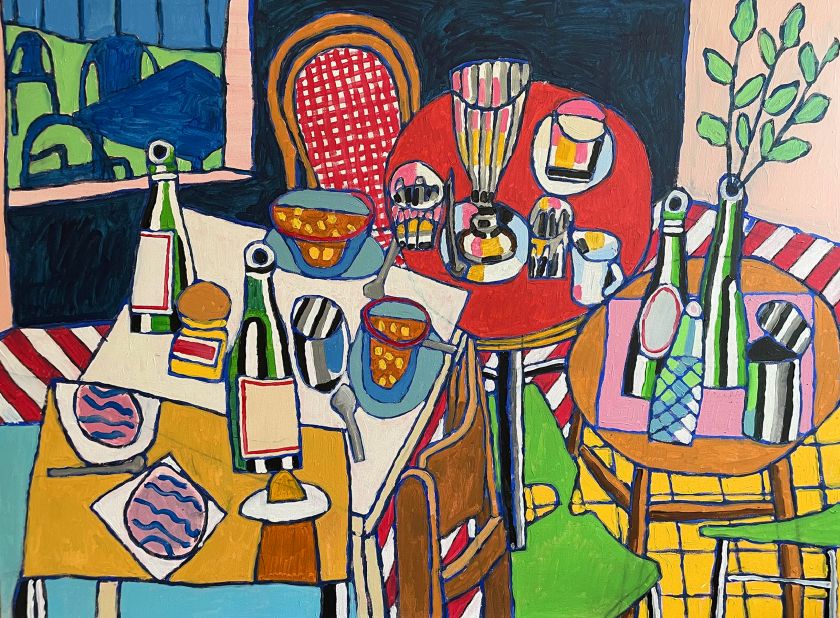 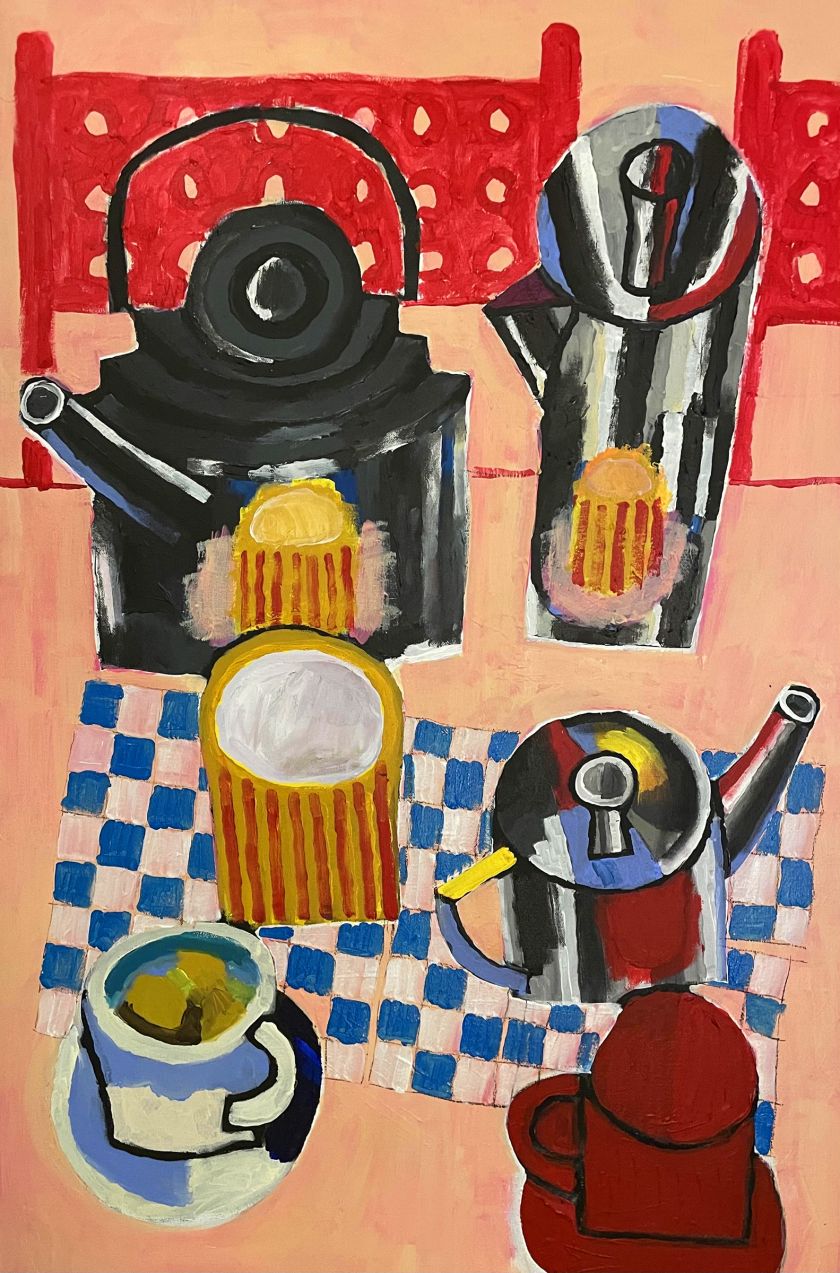 In one painting, has drawn up the contents of a kitchen table. Red chairs poke out amongst a pool of blue – the walls and table are drenched in the calming royal shade – while the patterns of the bottles and glasses stick out in their own contrasting palettes. “It was the first painting I did that felt natural and unforced, yet retained the boldness and graphic nature I enjoy.”

In other news, Tom has just opened his debut solo show called Still Life, held at the restaurant Tila in Deptford, south London. In what he refers to as a “good summary” of paintings over last year, the exhibition will be a visually entropic reflection of isolation and a world under lockdown. 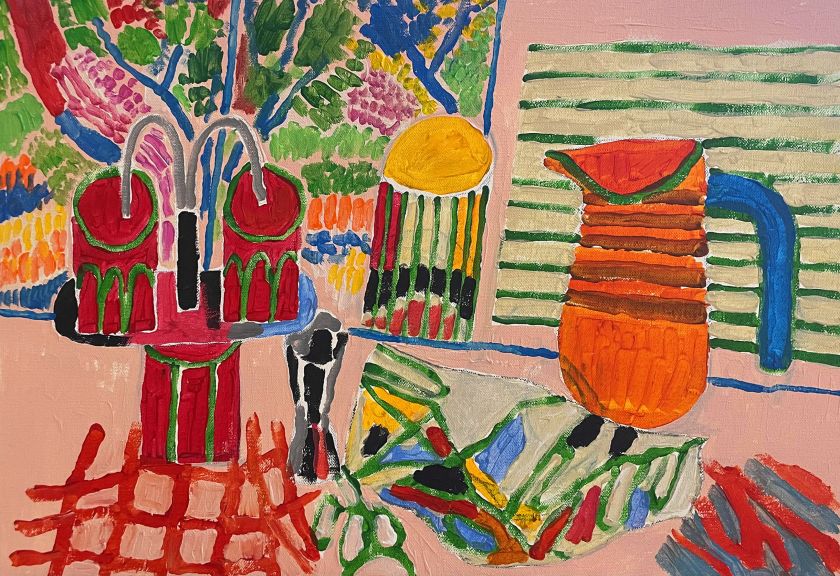