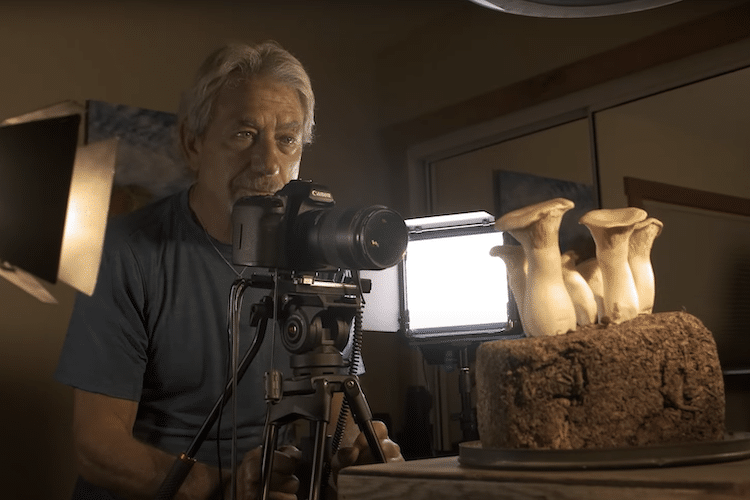 In a new by Wired, director gives a behind-the-scenes look into the painstaking 15-year filming process of his 2019 documentary, . The illuminating film reveals the extraordinary hidden world of mushrooms and mycelium, both on and beneath the Earth’s surface. Filmed in Schwartzberg’s own home studio, the mesmerizing time-lapse videos featured in the documentary give an up-close perspective of these fascinating organisms as they bloom and grow within an interconnected network of and wildlife.

It might sound counter-intuitive to film a subject that lives outdoors inside. But due to the fluctuating light and weather conditions (as well as various pests), it was impossible to film these spellbinding shots in the natural environment. In his studio, Schwartzberg was able to maintain controlled light conditions and used a custom intervalometer to capture each frame. Shooting once every 15 minutes, he was able to get a total of 96 frames every 24 hours, which equals just four seconds of film. No wonder it took nearly 15 years to complete.

“I set up shots in the morning. I check them at night,” Schwartzberg reveals in the . “I realized I’ve turned it into a spiritual practice. It actually, literally, gets me up in the morning… I have to imagine what the framing and the composition is going to look like tomorrow, or two days from now, or a week from now. And that is a transformational experience because you have to put your mind into the mindset and the intention of the flower or the fungi, thinking where it’s going to grow, how big will it get. And if you’re right, boy, it’s a rush. If you’re wrong, it means you’ve just got to do it all over again.”

Scroll down to watch the full behind-the-scenes video. To watch the culmination of Schwartzberg’s hard work, stream Fantastic Fungi on .

Here’s the trailer for the illuminating mushroom documentary, now streaming on Netflix.